Having saved the castle of the High King: Dragonskeep, our heroes stayed for some well earned R&R.

However, the peace was not long lived.

Necromancers had gathered around the castle to perform their unholy craft on the dead from the war. While this was manageable by the castle guards for a time, the task was made increasingly hard by demons flooding out from fissures created by “The Wreckoning“, the massive magical attack by the Drow army that tore Dragonskeep down from the nearby Titanheights mountains and effectively started the war.

Encounter in the courtyard

Discussing how to deal with the waves of undead mixed with demons that kept crashing against the castle walls, the heroes decided to go to the library to investigate how to make use of the Hellfire Cannon without losing more % of soul of anybody.

Stepping out into the main courtyard, the heroes found panicking people running from odd feathered demon creatures that came out of the well in the centre of the courtyard. 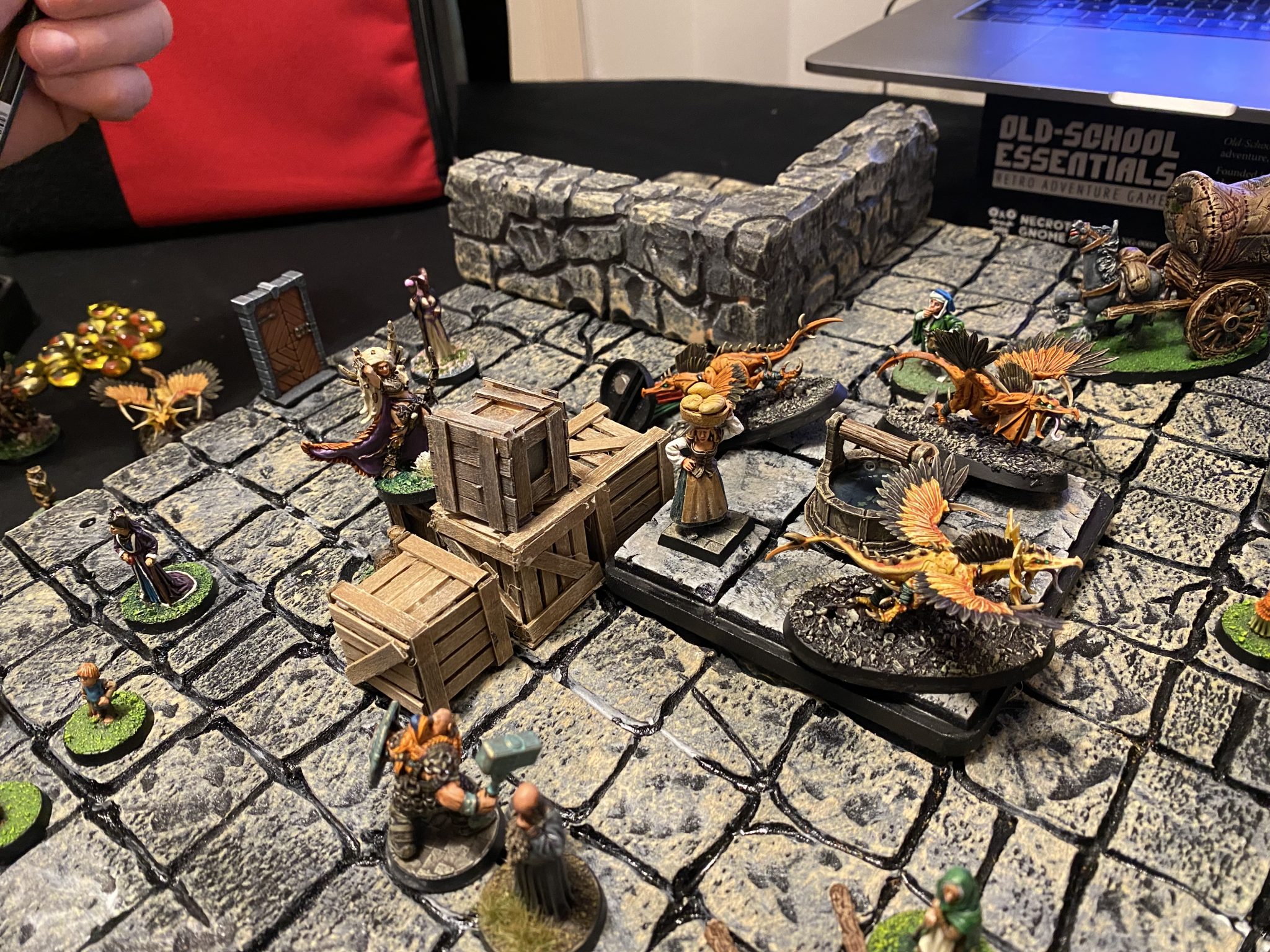 The heroes realised the gravity of the situation as they watched helplessly as a woman was snapped in half by one of the creatures.

Quickly they stepped into action killing several of the creatures. 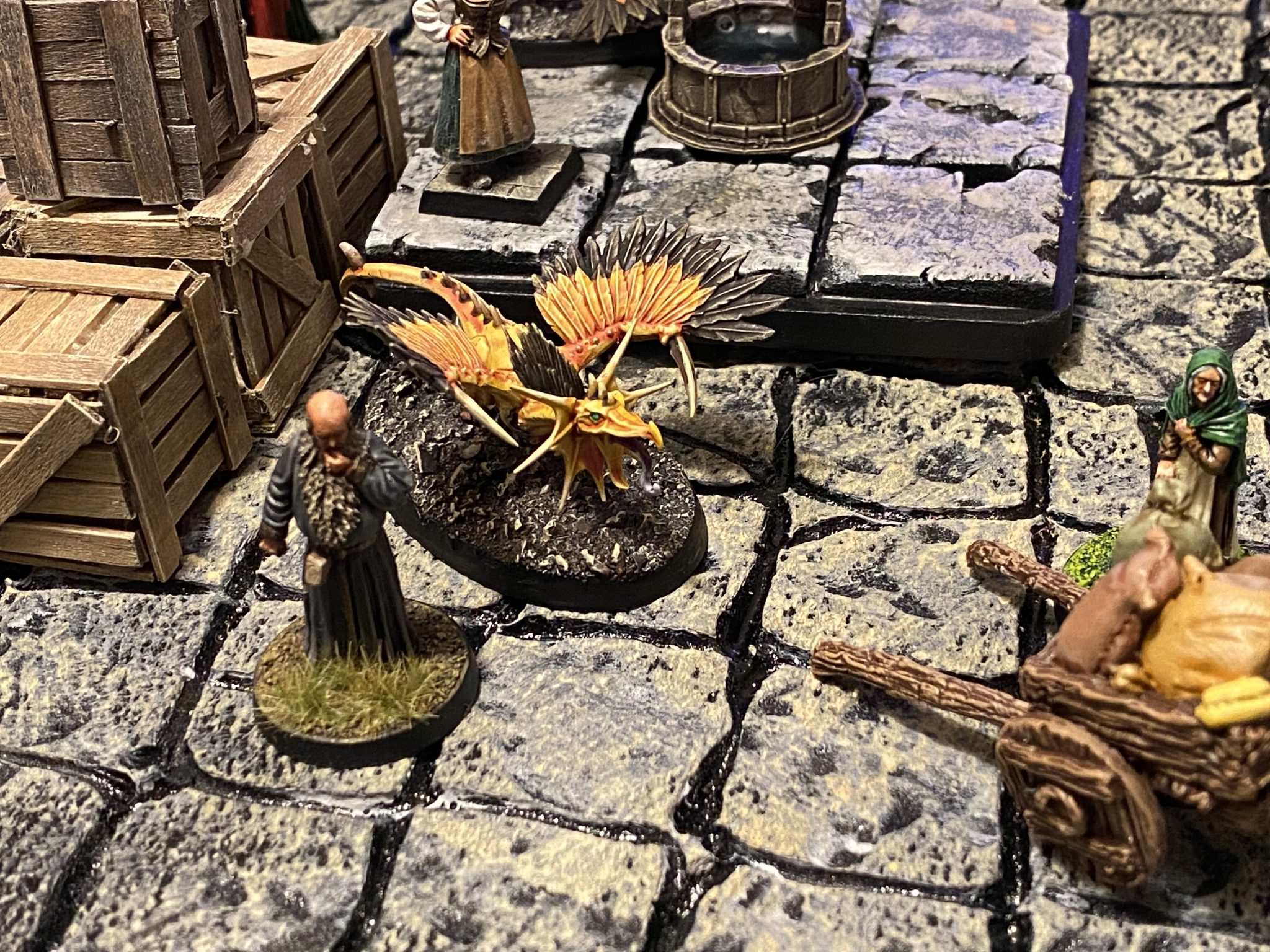 Seipora, the tiefling sorcerer tried to destroy the well with Thunderwave, but while she killed two creatures in the blast, the well stayed. 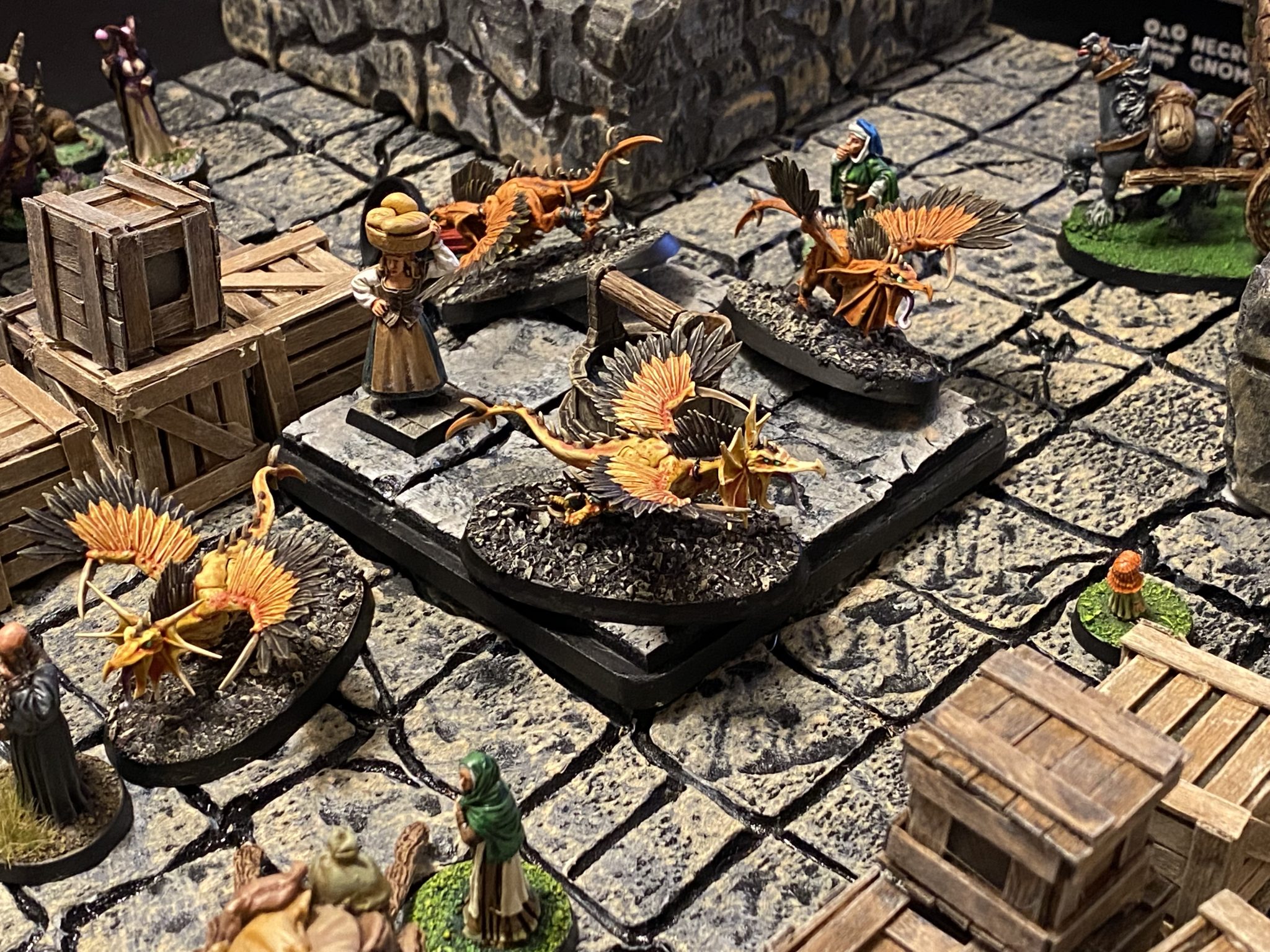 To make matters worse, the citizens were running around in panic and one drunk ex-adventurer decided the best option would be to leave the area.. by using the main gate that led out to the masses of undead and monsters outside!

Thorga, the Dwarven Paladin, saw this but opted for blocking the well with a nearby horse carriage. 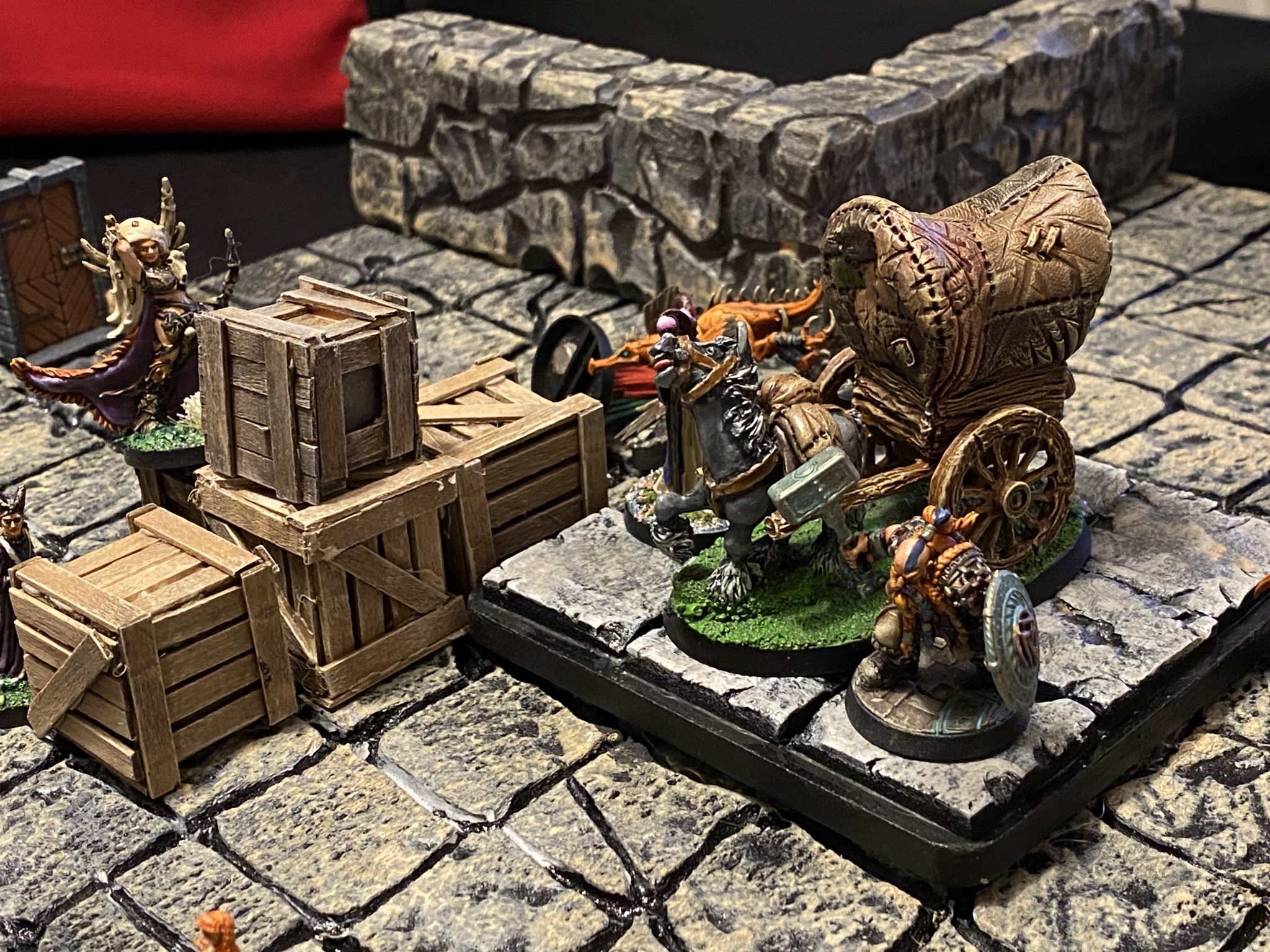 Kaari, the Ranger, left with no choice, shot an arrow in the knee of the drunken ex-adventurer to stop him from literally opening the floodgates.

In the end the situation was brought under control.

At the library the heroes the old librarian was gone replaced by an elegant, stiff upper lip man with a superbly maintained moustache and spiky eyebrows pointing upwards by the name of James Brimstone.

James was incredibly helpful educating the party on the Blood War between Demon and Devils and the history of how Asmodeus came to be the ruler of the 9 hells and how the Devils work to keep the Demons at bay.

On the question on how to recover Seipora’s lost % of soul (19% to be exact) James suggested that the party either visited hell to discuss terms with the new owner of the stake. Alternatively, he mentioned that Azrael, an angel trapped in hell, might be able to assist.

He also proposed three ways to get to hell:

At the Wizard’s lab, Kaari and Seipora met Jim Brimstone, who looked a lot like James.

The equally helpful Jim could tell the party the way to reconfigure a portal to lead them to hell and could also give them directions to the gate to the River Styx.

At the same time Thorga and Ms Gentlefeet were investigating the Hellfire Cannon to find out how to fire it without loss of more soul %. They were not successful, but found the makers stamp on the device: Brothers Deville, location Phlegethos, 4th layer of hell.

Looking for a gate to River Styx

The heroes opted for a griffon ride to the foot of Titanheights to search for the gateway leading to the River Styx.

On the way, they were attacked by a pack of hungry wolves led by a Winter Wolf, but they quickly repelled the attack. 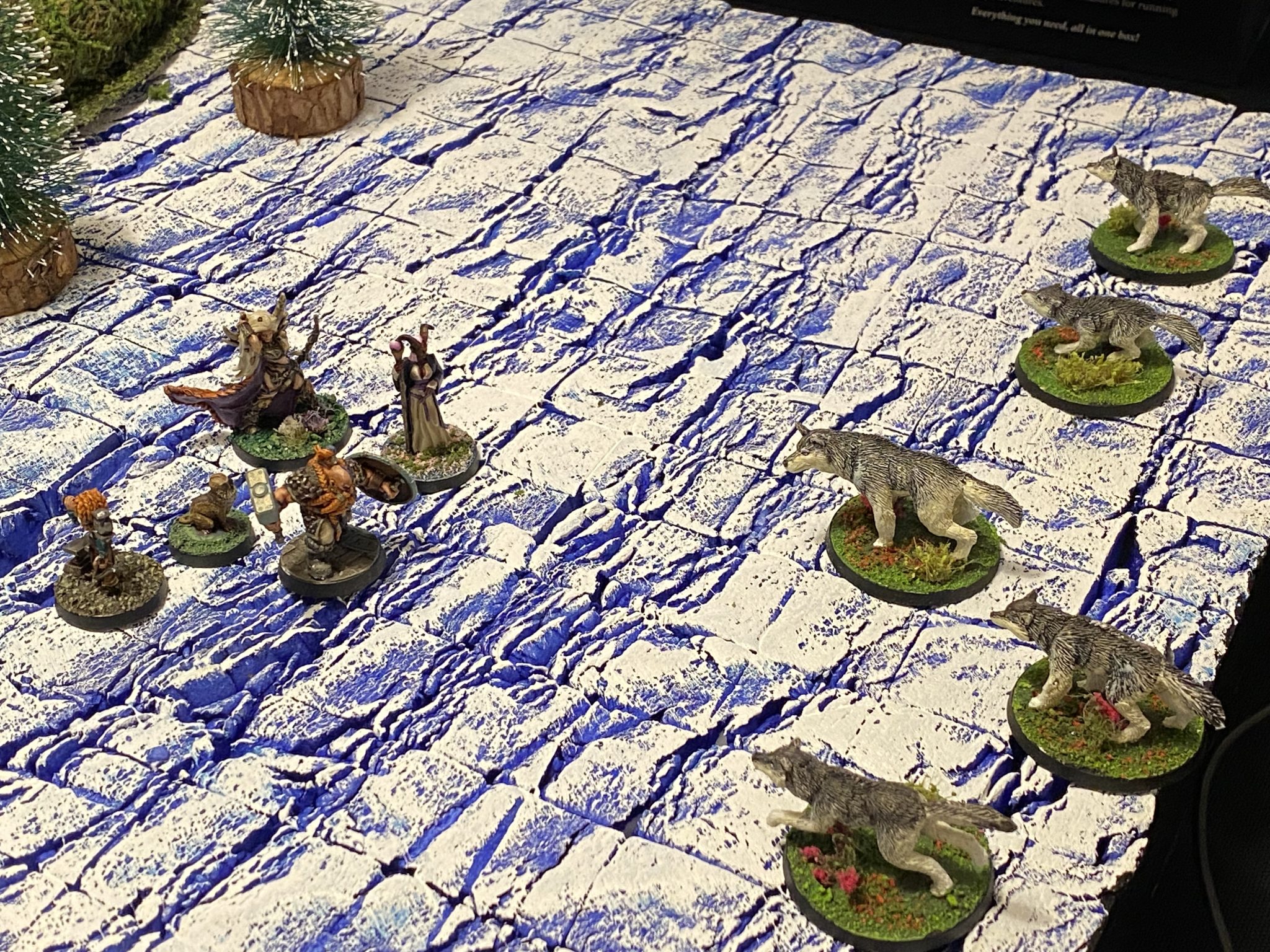 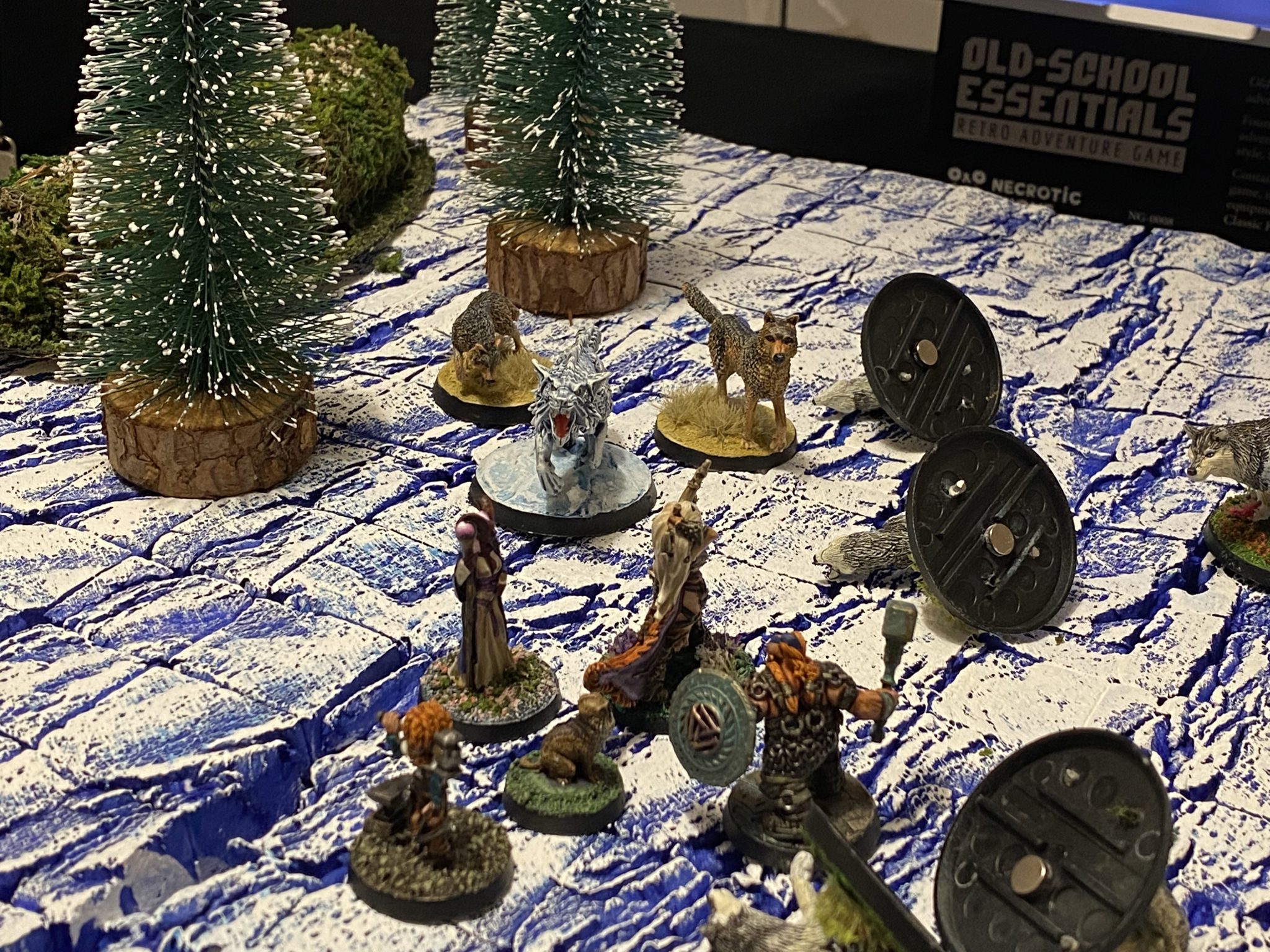 But the attack led the party to spot a huge two headed being near the foot of the mountain. 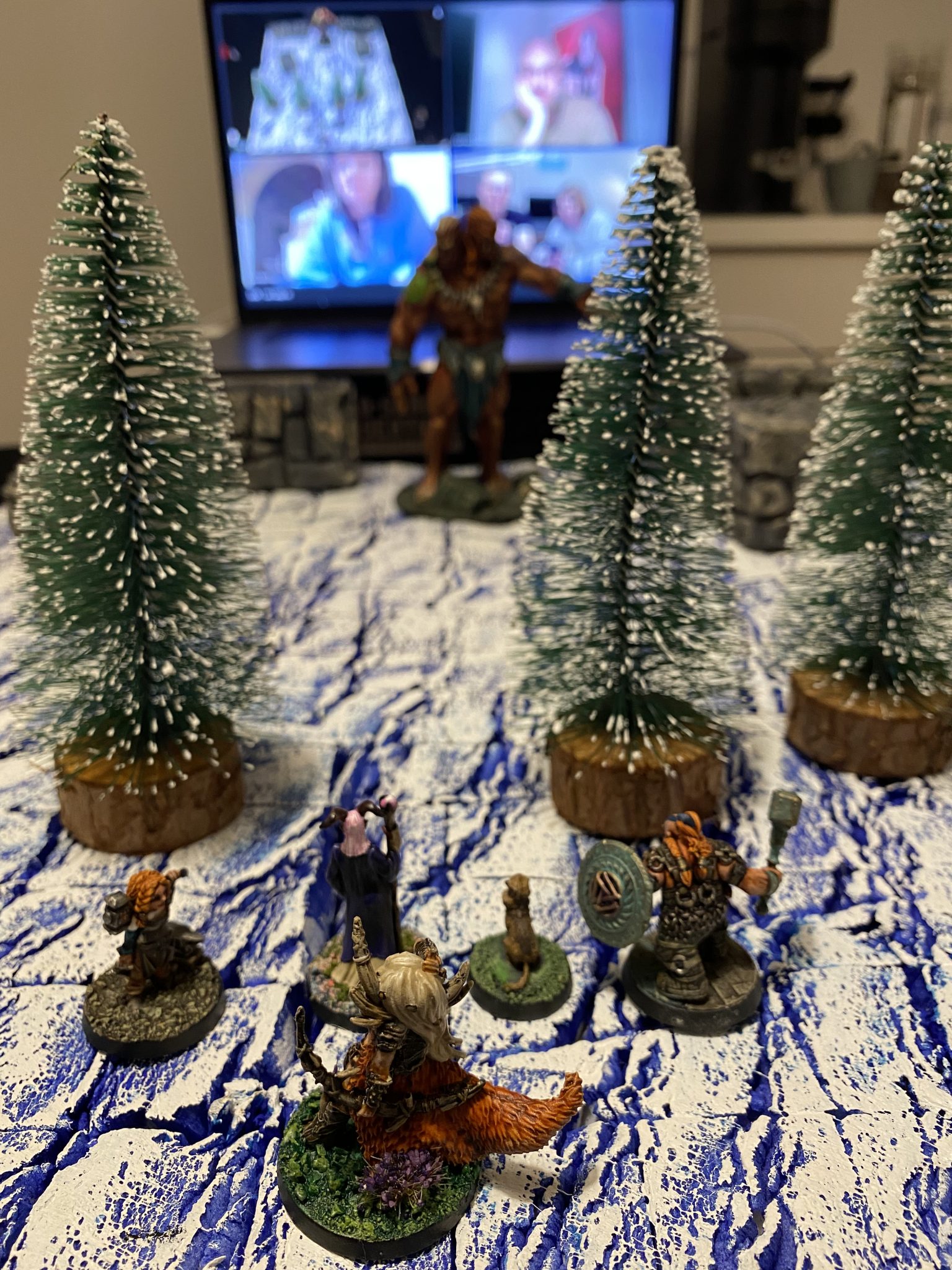 Silently they made their way closer…

They found a crafted gate in the mountain wall guarded by a huge two-headed Ettin.

After some debate, they decided to try send Seipora in to blind the foe and confuse it to run in through the gate, but her stealth didn’t match the ever watchful two heads and the attempt failed and battle broke out. 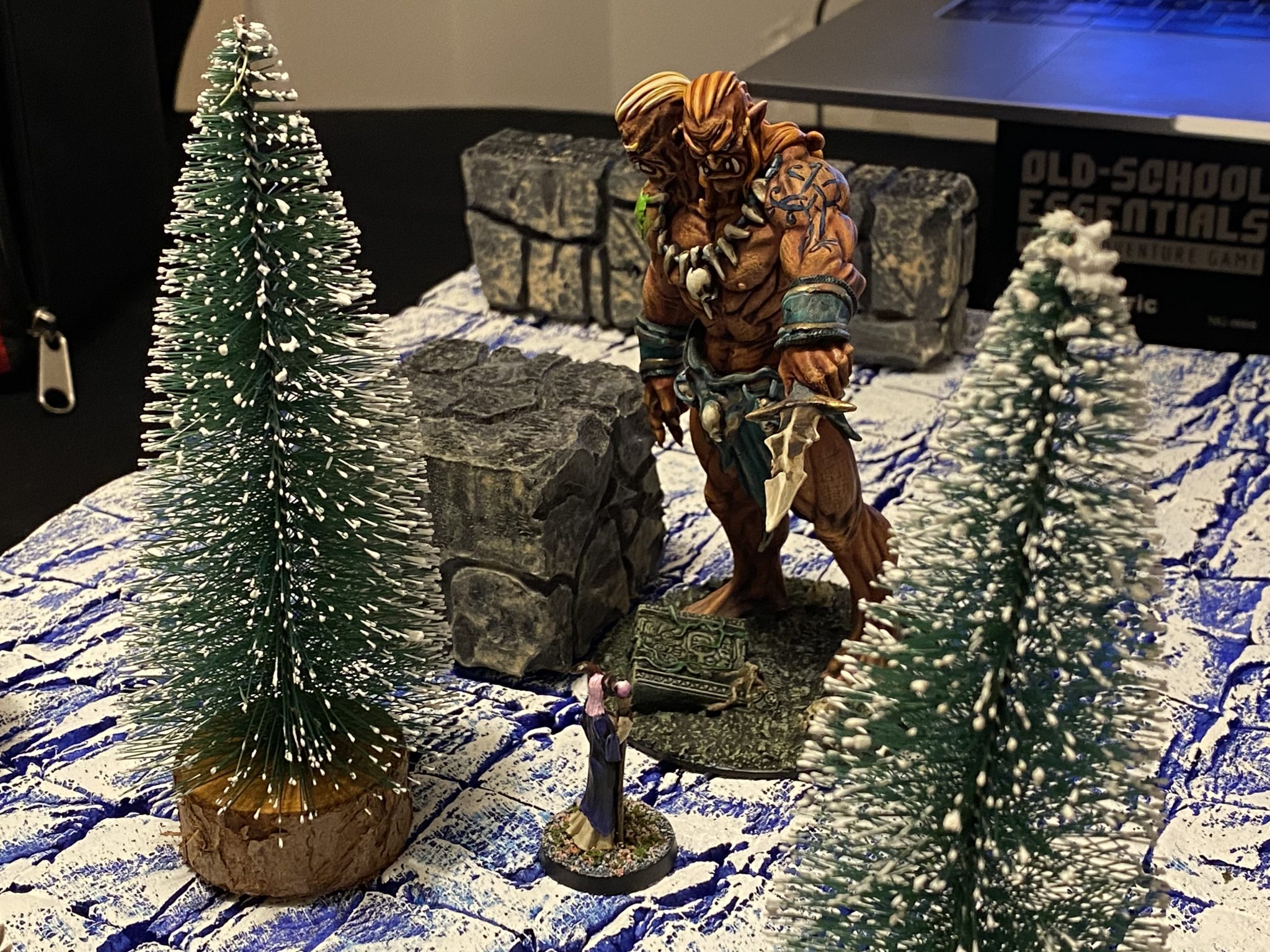 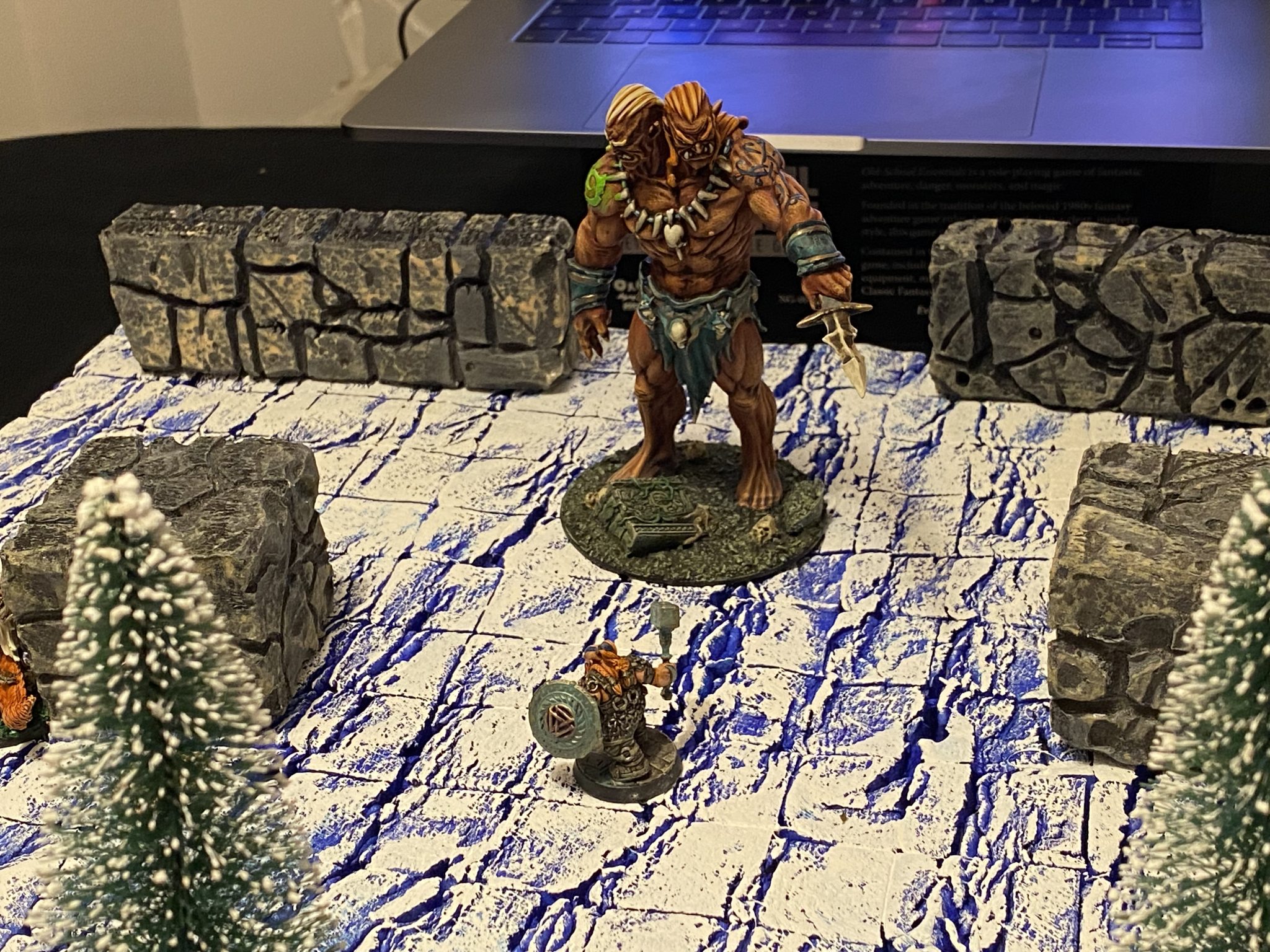 As the Ettin was losing ground, a Hell Hound emerged from the gate attacking the party. 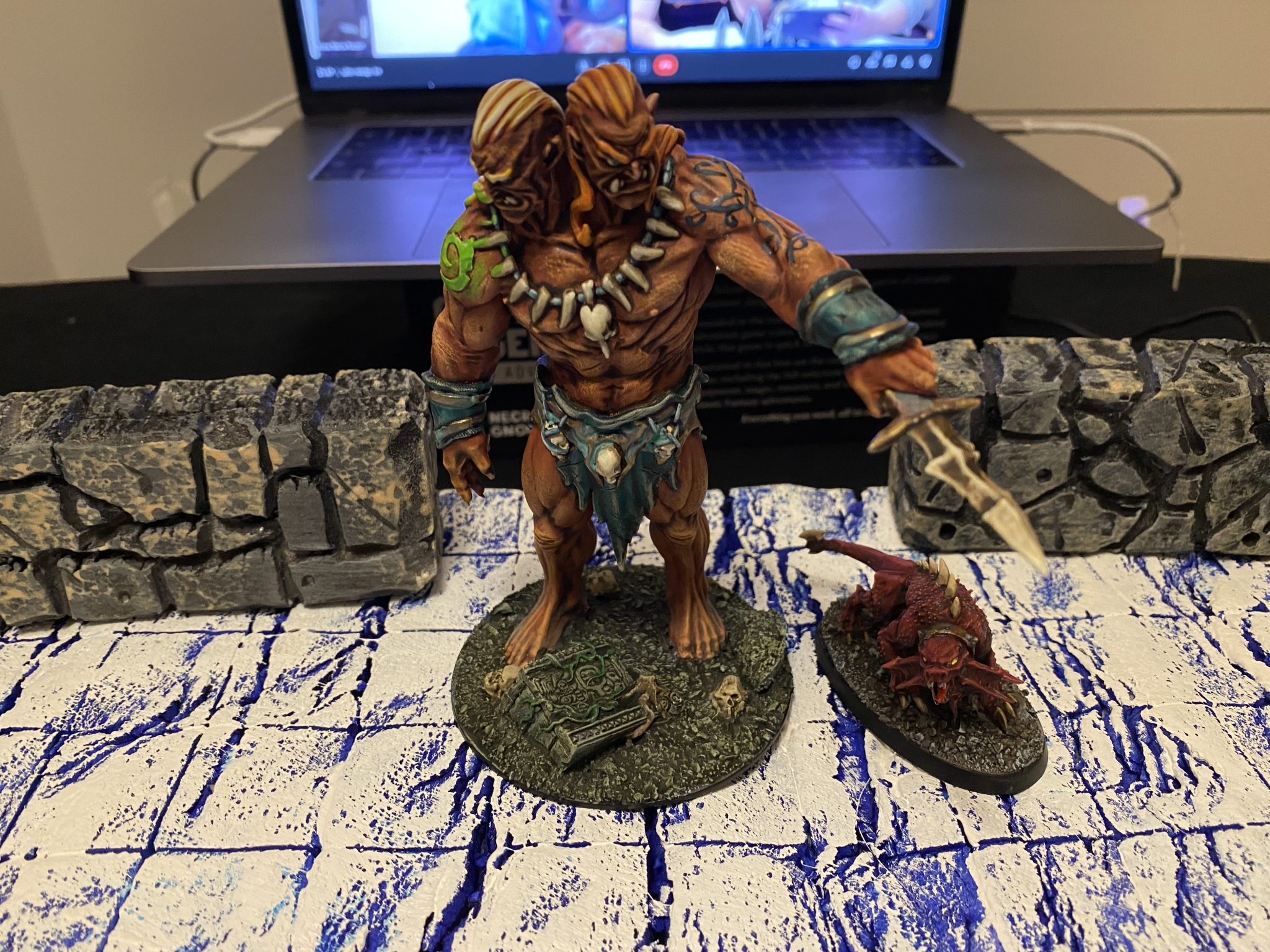 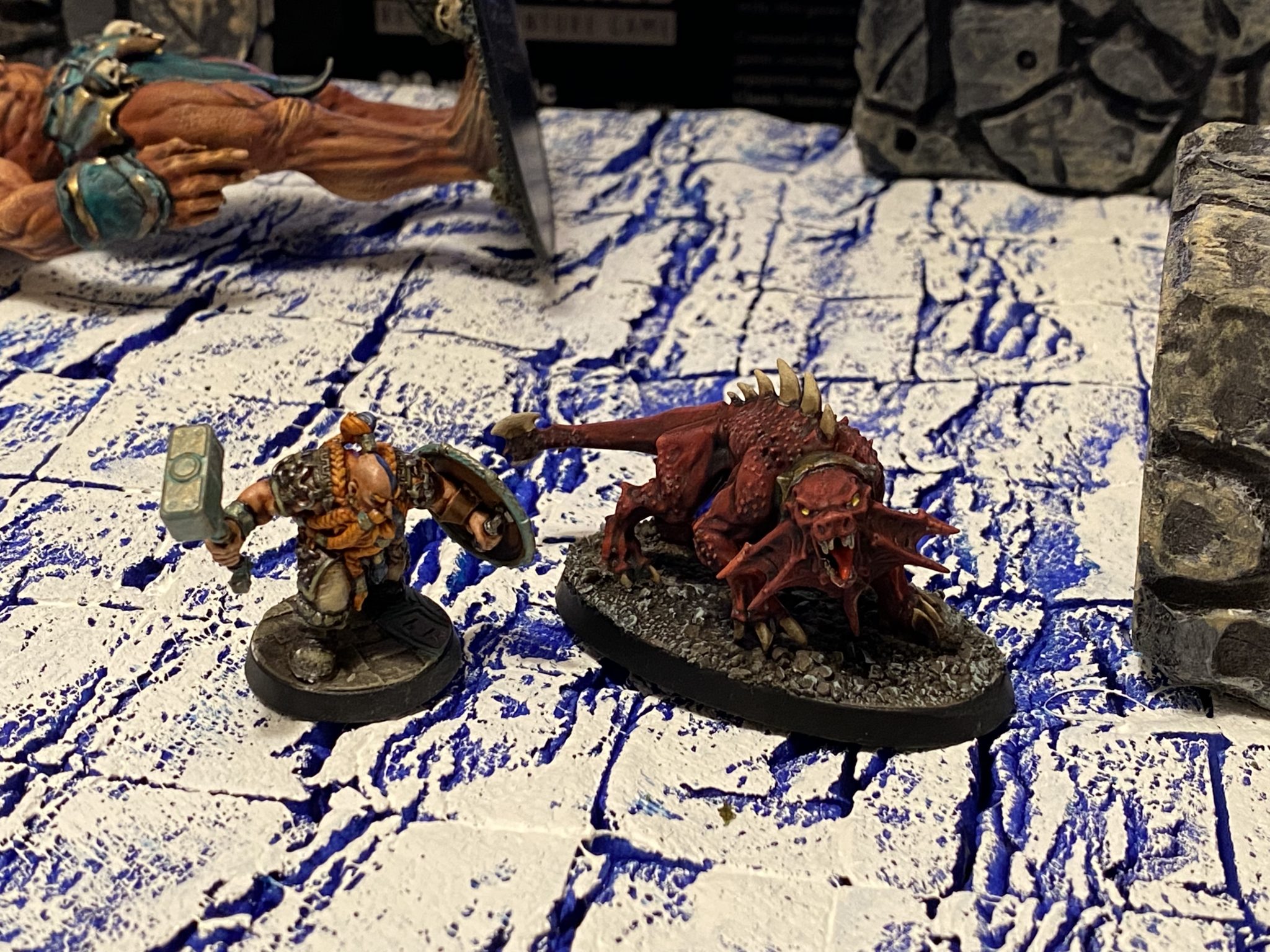 In the end the heroes were victorious, but at a cost. Two of them had been knocked unconscious during the fight and they realised this journey might be the toughest one they had faced in their careers as heroic adventures.

Making their way into the the mountain side, the heroes could feel the warmth coming from further down and soon they stepped out on the shore of a river of burning lava just in time to see a boat, steered by a hooded figure, leave the shore…