Standing at the bar in The Gossip, Autumn the Half-Elven Cleric and Penny the Necromancer, studied the different party cliques.

They spotted a few from The Pink Ladies. They could identify other groupings although those weren’t familiar to our heroic duo. And in between floated hang-arounds not affiliated with any of the established cliques.

A Talk with Leading Ladies

Finally, they turned their attention to The Leading Ladies a clique that had been pointed out to them by Pearl, the albino Tiefling owner of The Gossip. Pearl had revealed that Fayeth used to hang with The Leading Ladies.

As Penny and Autumn approached, Autumn noticed The Pink Ladies showing interest in their action.

The Double Trouble learned that Fayeth had acquired a quite beautiful dress described as otherworldly, though not to be taken literal.

The heroes learned that especially well dressed party people would receive an invitation to the Blitz Ball, but as the discussion continued, it sounded like people invited to the Blitz were not seen again.

The heroes went back to the School of Necromantic Studies to ask Professor Maxima Blackstone if there was any disturbance in the magical energies that would point to the disappearance of people, but Maxima, mainly concerned with school business, was not able to help.

As the heroes passed by Fayeth’s room, Autumn case a quick Detect Evil spell and there was a ping from a chest in Fayeth’s room. 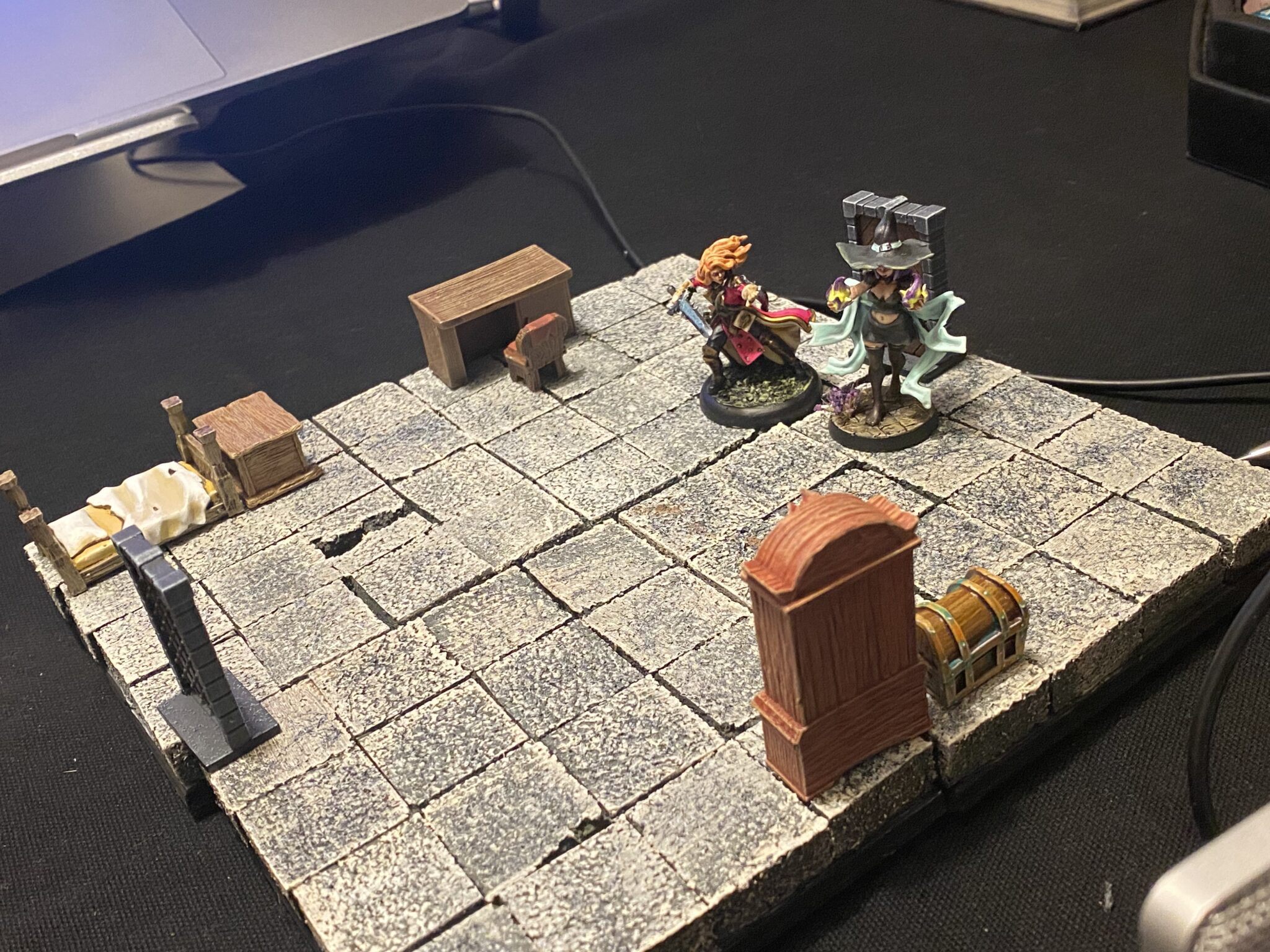 Penny tried to open the chest with Mage Hand, but it was stuck. Atumn used Thaumaturgy to shake the chest, but the result was a violent explosion covering the ceiling with dripping acid.

To make things worse, a lone Templar of The Vigilance burst in shouting: “You are not allowed in here!” 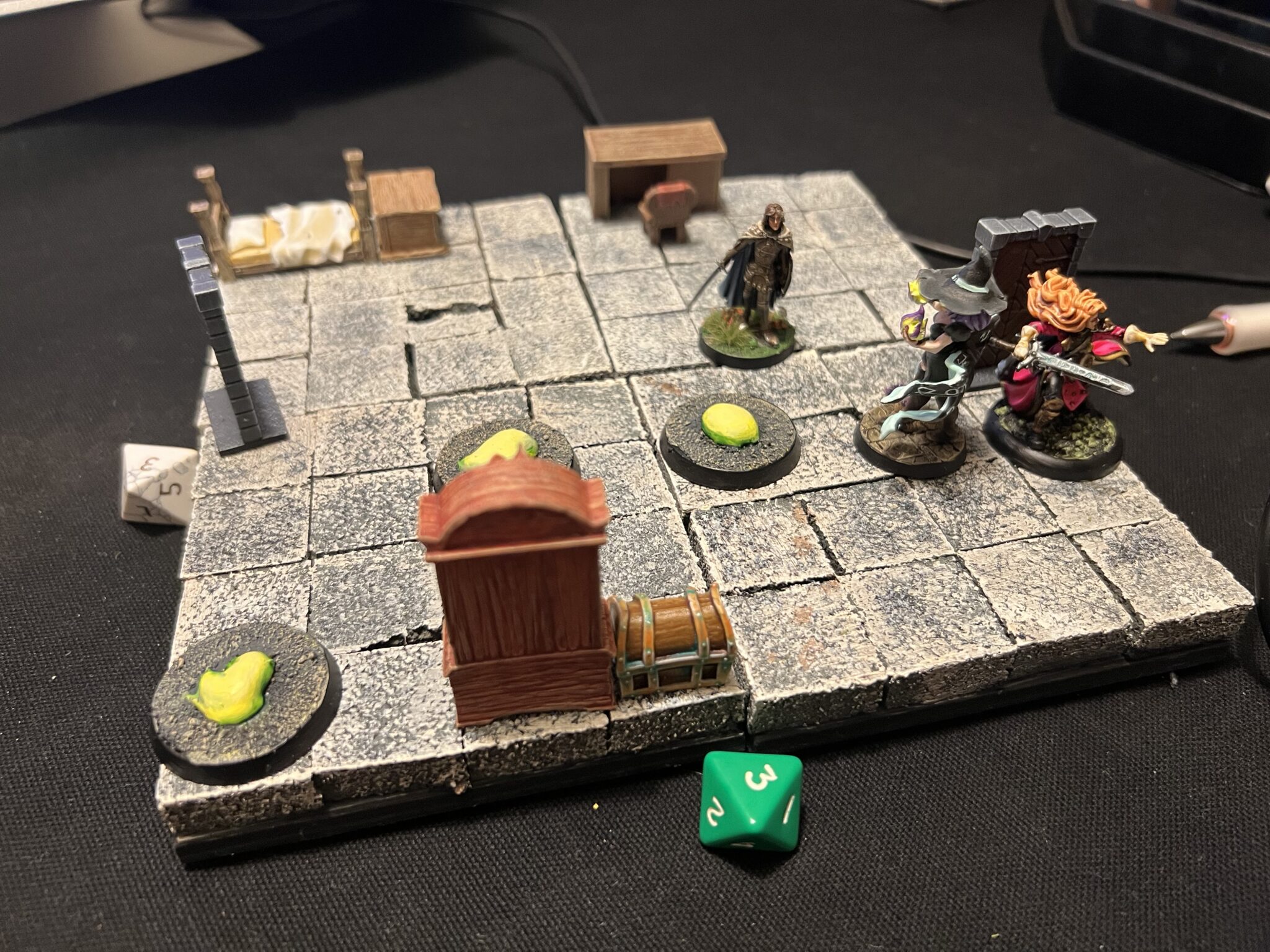 With acid dripping from the ceiling and a mad Templar swinging his sword around, Penny cast Invisibility on herself and ran out the room.

Autumn chose a more direct way out and pushed the surprised Templar to the ground before following her friend.

They ran back to Professor Blackstone’s office without the Templar following.

As the the heroes and Professor Blackstone arrived back at Fayeth’s room, the Templar was gone having ransacked the room.

Professor Blackstone left to find someone to clean up, while our heroes searched for clues. Autumn used Mending to recreate the glass vial the acid had been contained in and Penny could decipher the markings as related to evil dark fey magic.

Autumn, looking at the markings, had an instant memory from her time at the temple and thought the vile vial related to Hags.

At this point Gnarlious, a very old professor, arrived agitated and it soon became clear Gnarlious had been attacked some months ago by the same acid.

Furthermore, the heroes realised that scars made by the acid cannot be healed.

This was truly cruel magic.

As evening approached, the heroes rushed to The Jolly Tailor, a dressmaker known for his fine outfits, but he was closing shop for the day and the heroes weak attempts of threatening him, bore no results.

Disappointed Penny and Autumn decided to spend the evening at The Wave of The Wand, the hangout tavern for Neccormancer students. 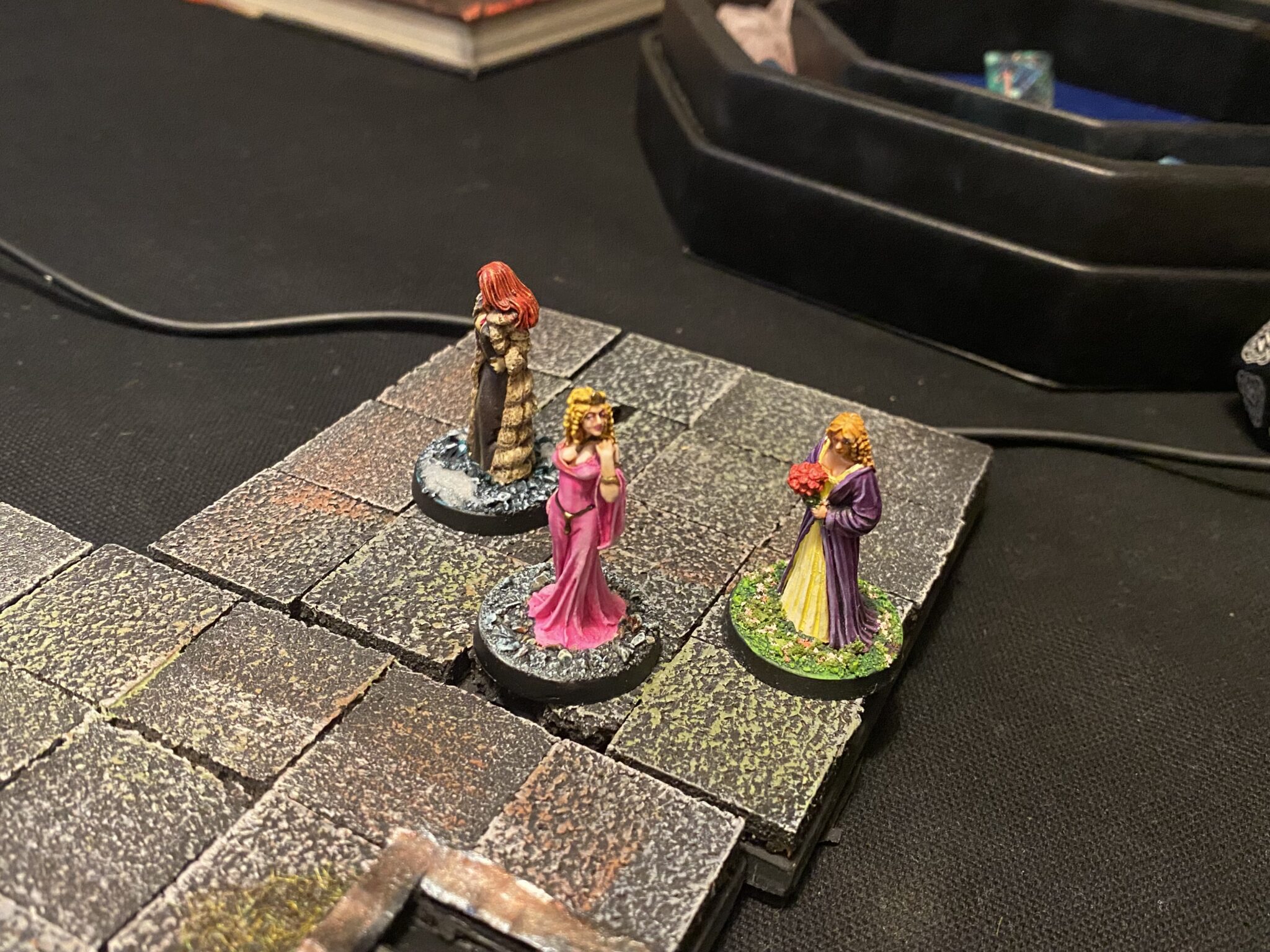 They had seen Autumn and Penny talk to the rival clique, The Leading Ladies at The Gossip earlier and suspected the heroes had valuable information given the Leading Ladies had taken their time to talk with them. 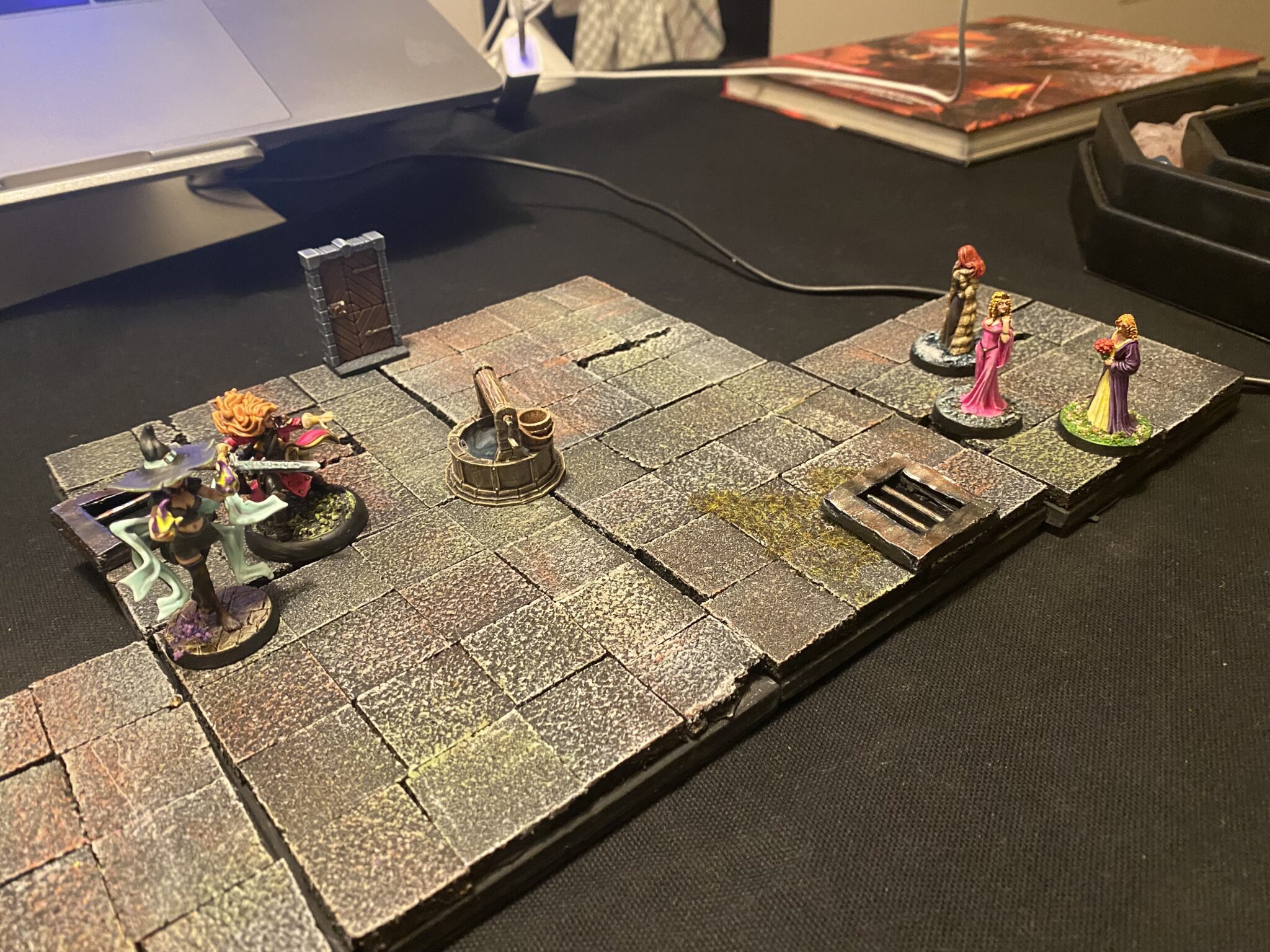 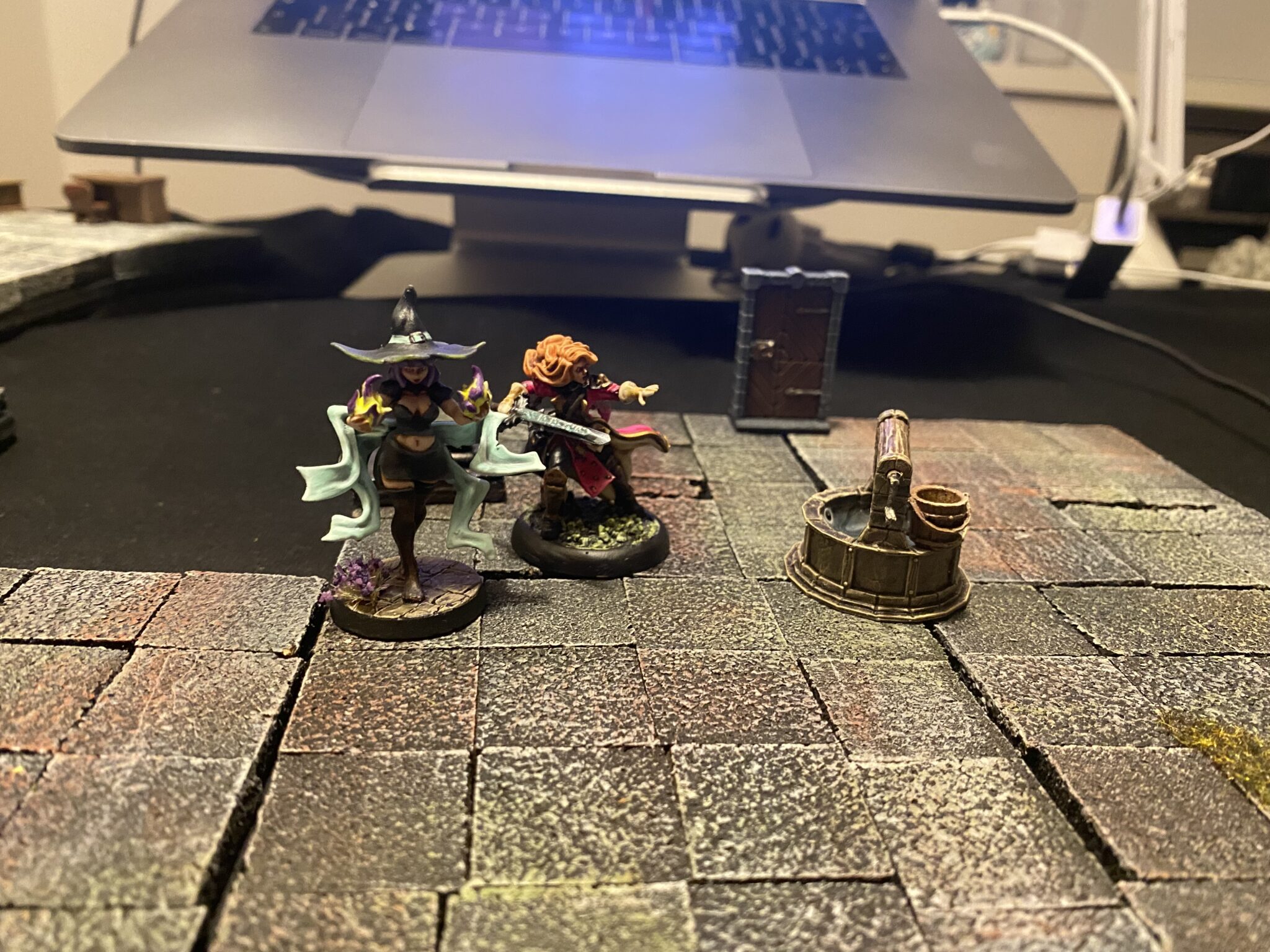 , but as they started to run for The Wave of The Wand, two more Pink Ladies stepped out of the shadows. 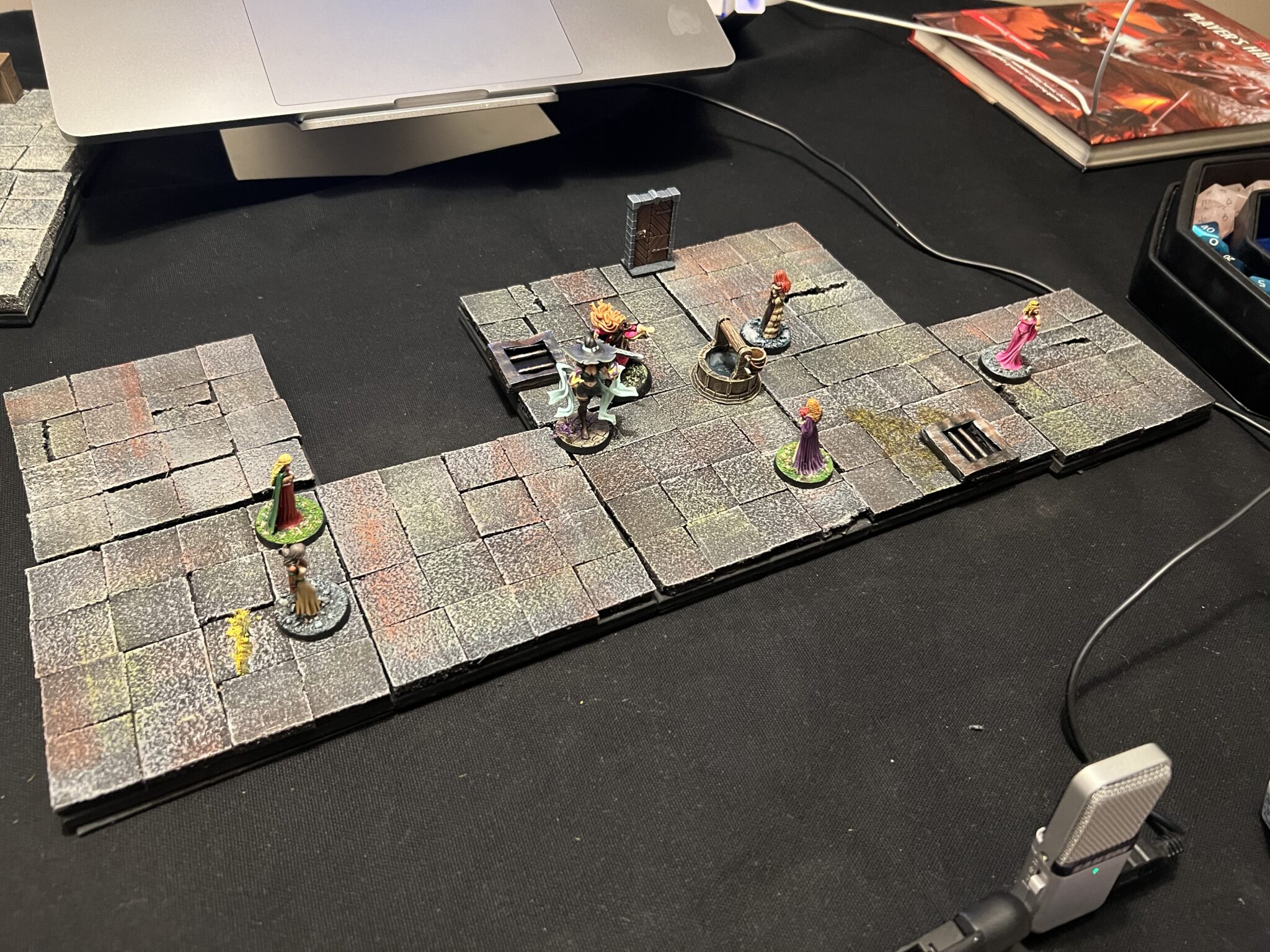 But Penny had a quick answer to the problem and cast Sleep on the two emerging Pink Ladies, clearing a way out of the trap. 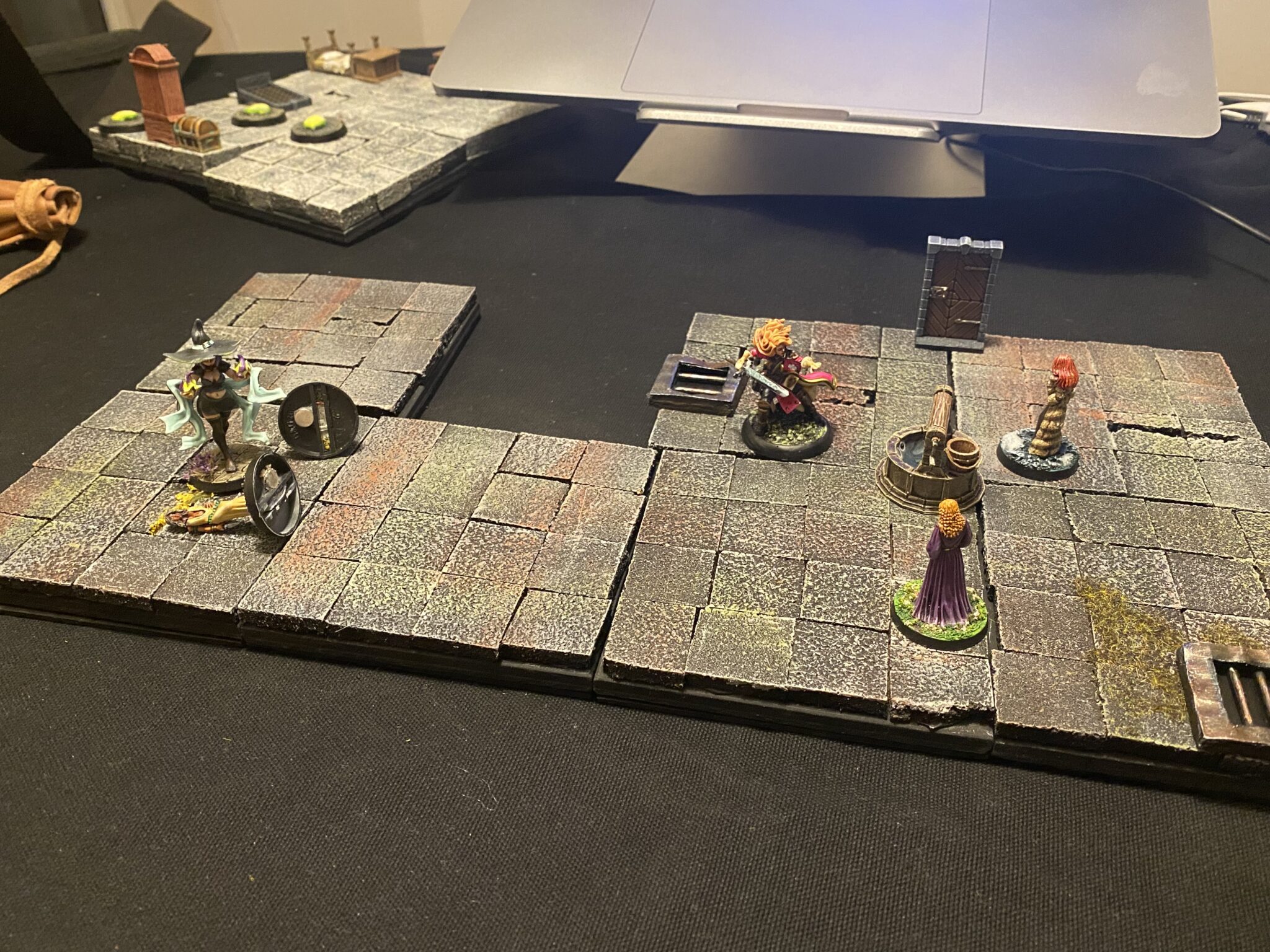 Back at The Wave of the Wand

Our heroes made it safely back to The Wave of the Wand. Although Autumn still wasn’t too comfortable with the place, she felt more safe there than out in the dark streets pursued by The Pink Ladies.

However, Harmony Hall did not have any further info about Hags. Indeed, he did not believe Hags would even be able to live in the city as both the Vigilance and the Keepers of the Balance would have kicked them out.

But a young Necromancer student, Owen, overheard the conversation and told the heroes that he had indeed seen a shop run by Hags down an alleyway.

He told them he had almost missed the shop as it was magically hidden in a wall, but due to the calm mindset he was in at the time (due to some herbs bought from Harmony), he has spotted the shop and seen the Hags inside.

Another lead as the mystery deepens…