Having saved the Dwarven town Wildgate, the party took a long deserved rest at the “Drunken Tailor” and the next morning, Thorga our Dwarven Paladin, left bright and early to go discuss the Troll threat with some of the local Dwarves.

Kaari, the Ranger and Seipora, the Sorcerer, did what they could to help the unlucky townsfolk after which they returned to the “Drunken Tailor” for some dinner, where they overheard a couple of Dwarves arguing whether the rumours of Undead walking the streets was true or not.

Suddenly, a large explosion rang from outside.

Kaari and Seipora ran out to see what had happened and already the streets where filled with dwarves running towards the town’s storage, which now ablaze with huge flames and smoke billowing out on the streets.

As our heroes ran towards the burning building, they saw a few shadows running away around the corner of the bulding.

but with the dwarves cramping the streets trying to subdue the fire, the heroes were stuck in the mob.

DM note, the following is a Skills Challenge.

Alas the heroes didn’t catch up with the culprits but as they investigated a fountain, they heard loud commotion coming from the path leading to the right. 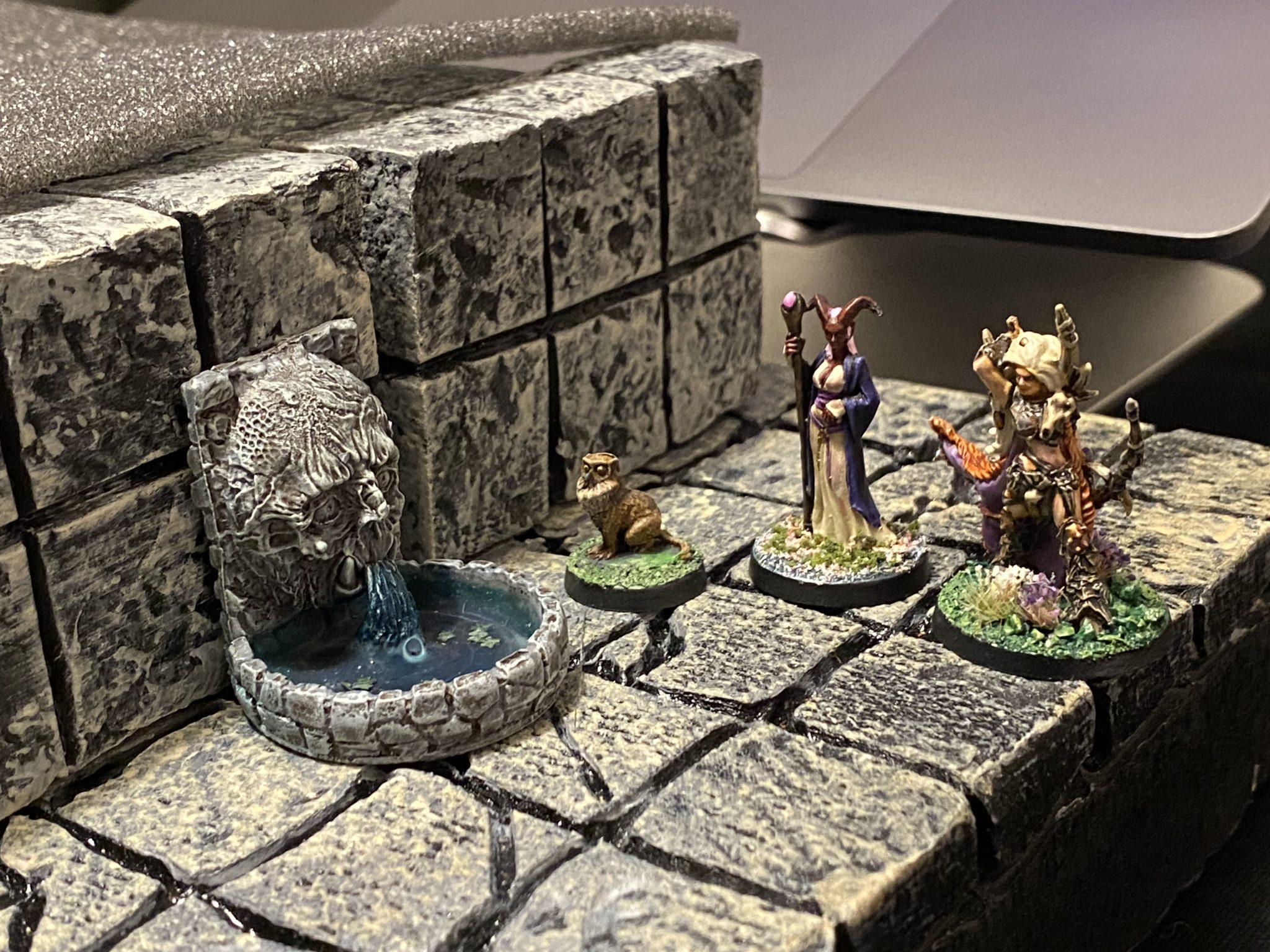 Looking around the corner, Kaari spotted a horse cart that seemed to have been left behind. 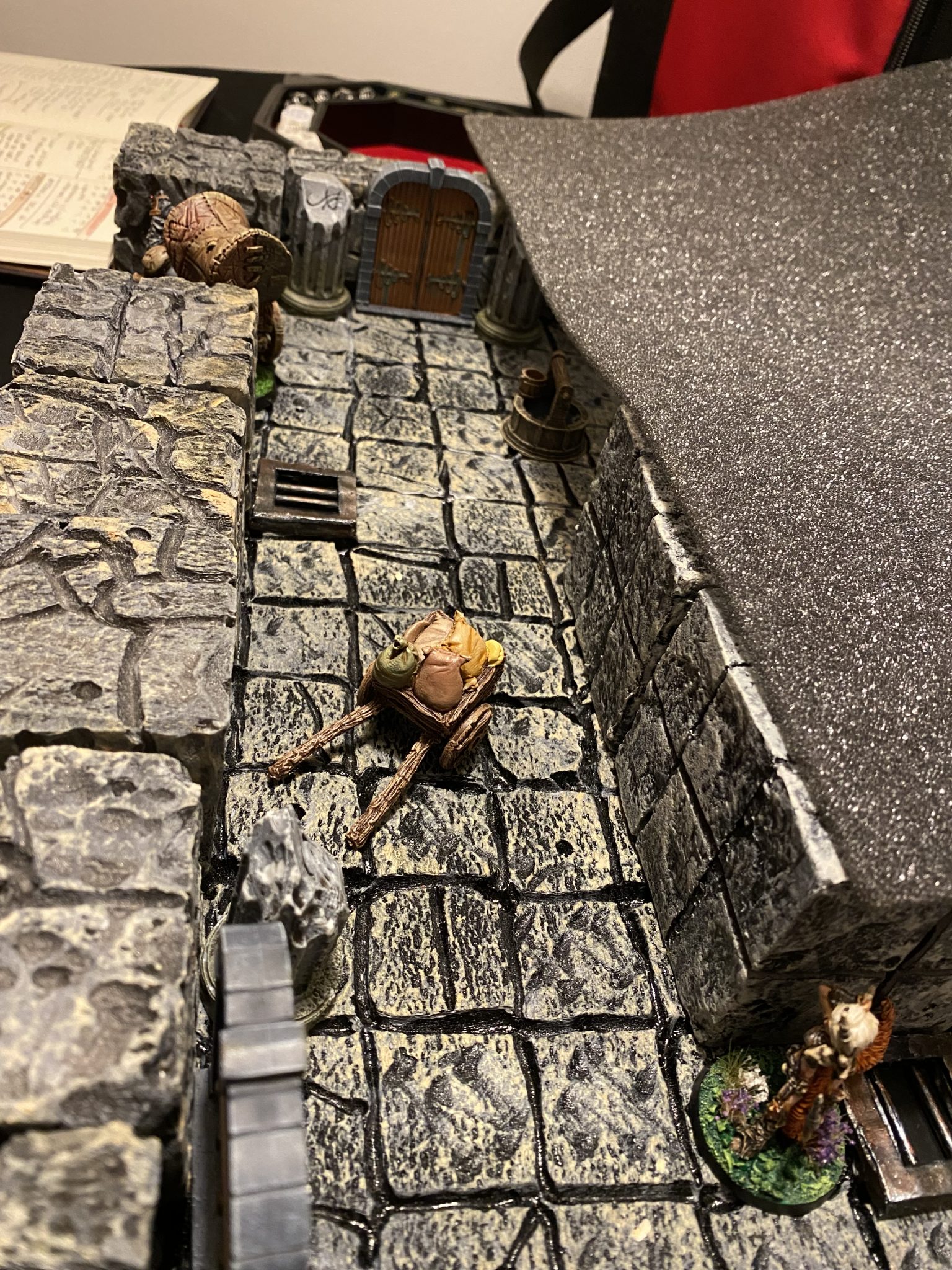 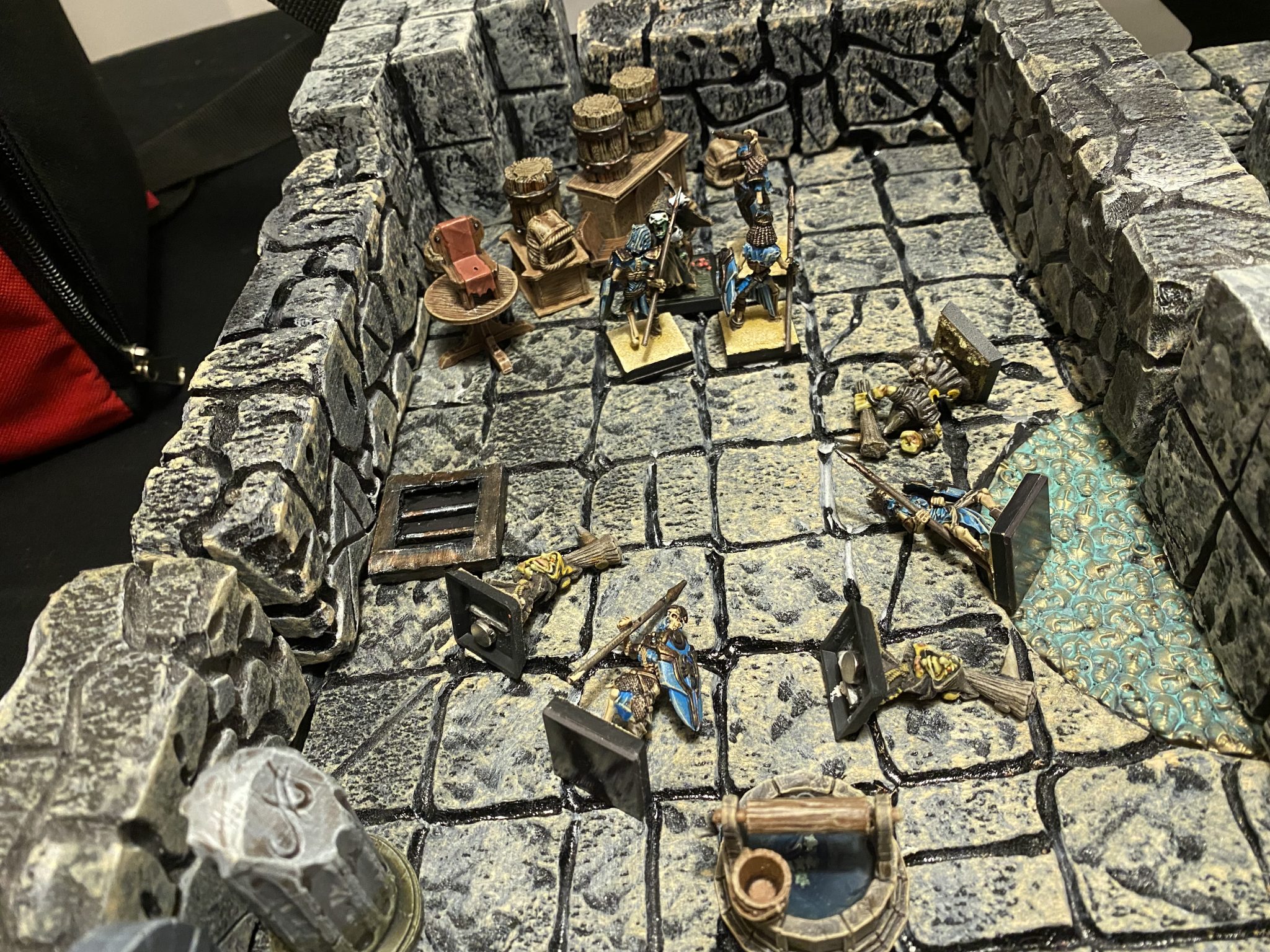 Behind the carnage was a person fighting 3 undead guards. 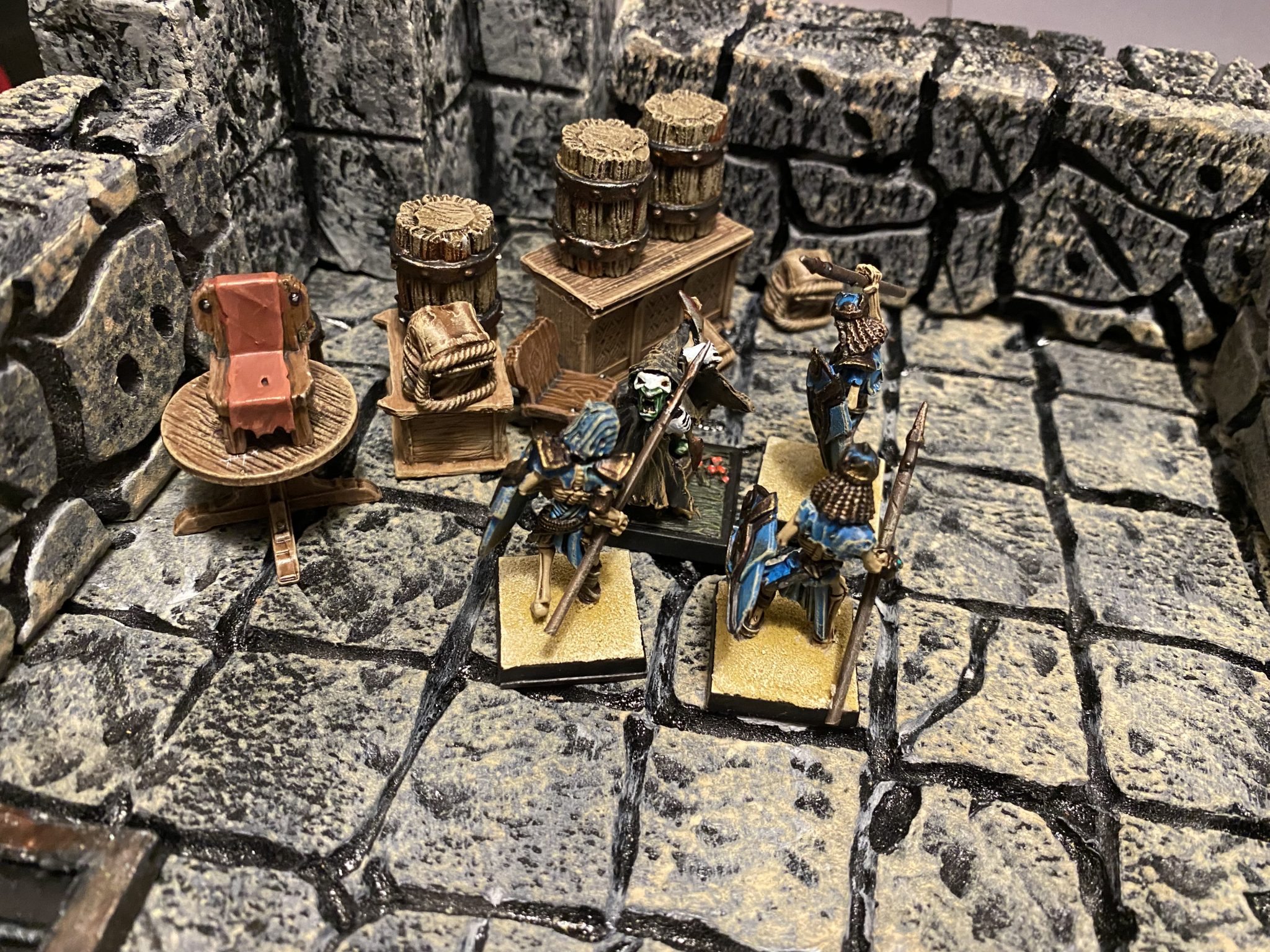 Kaari and Seipora tried to sneak over to the horse cart, but Polly the pet Owlbear, stumbled and the heroes heard cries for help from the figure fighting the 3 undead guards: “Oi! Over there! Help! Help!”.

Seipora suddenly had an idea! She quickly lit the horse cart on fire and with almost super human strength started to push it towards the fight. Kaari barely having enough time to free the horse from the burning cart. 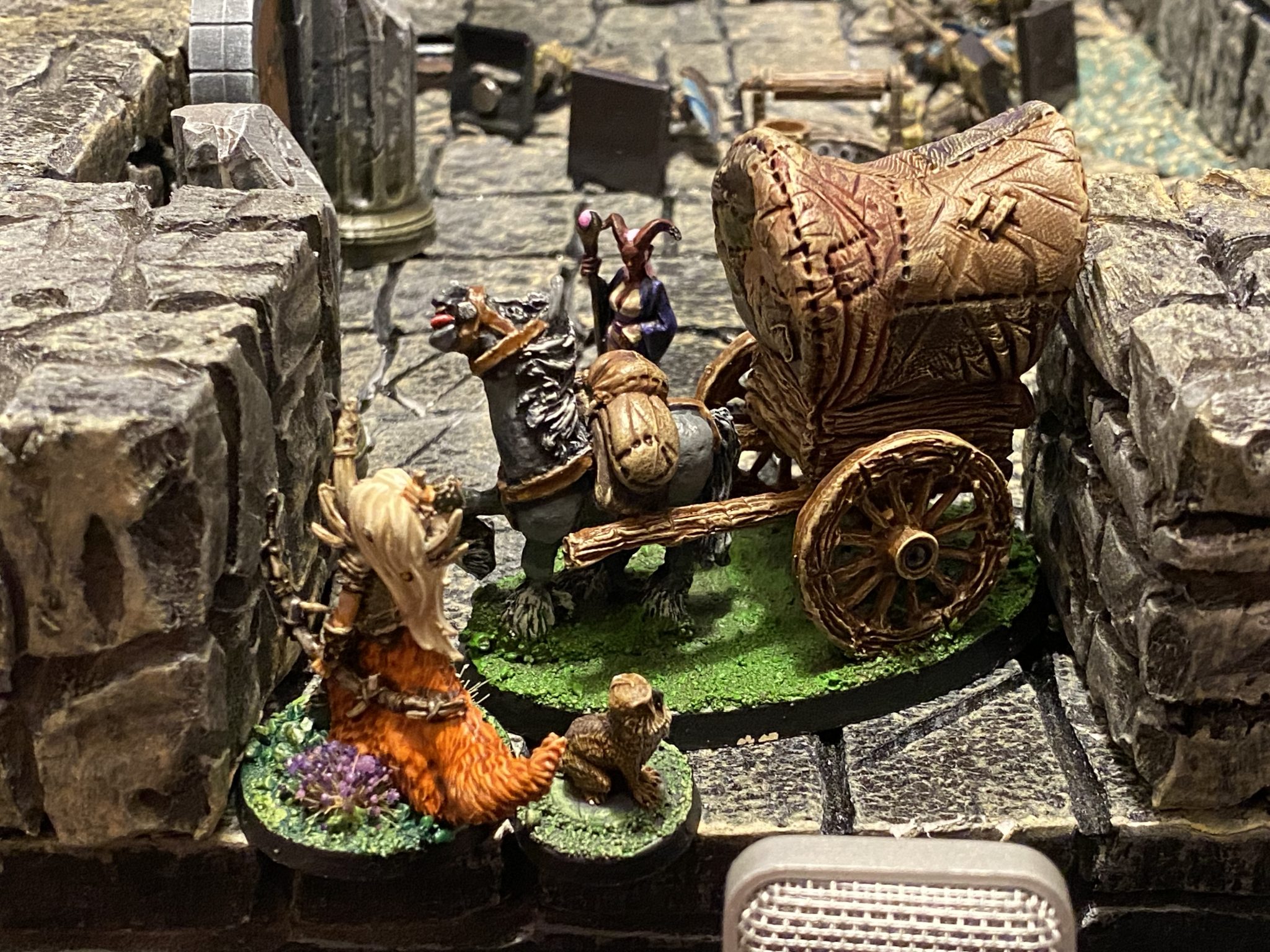 As the cart gained momentum, she pushed it right into the fight. 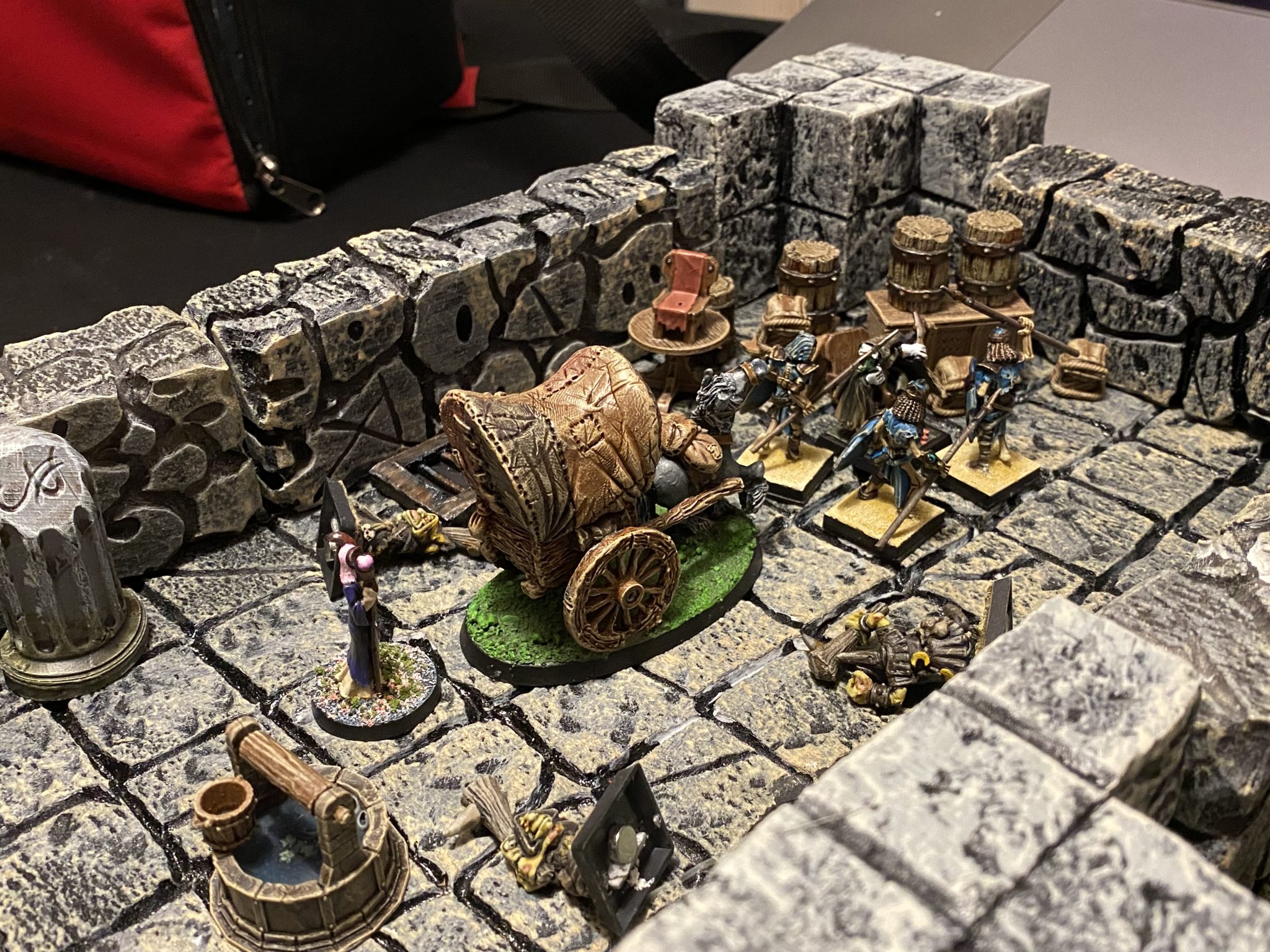 The figure, who had stood its ground, a hooded Night Goblin, jumped out of the way as the cart crushed the three undead in a loud crash. 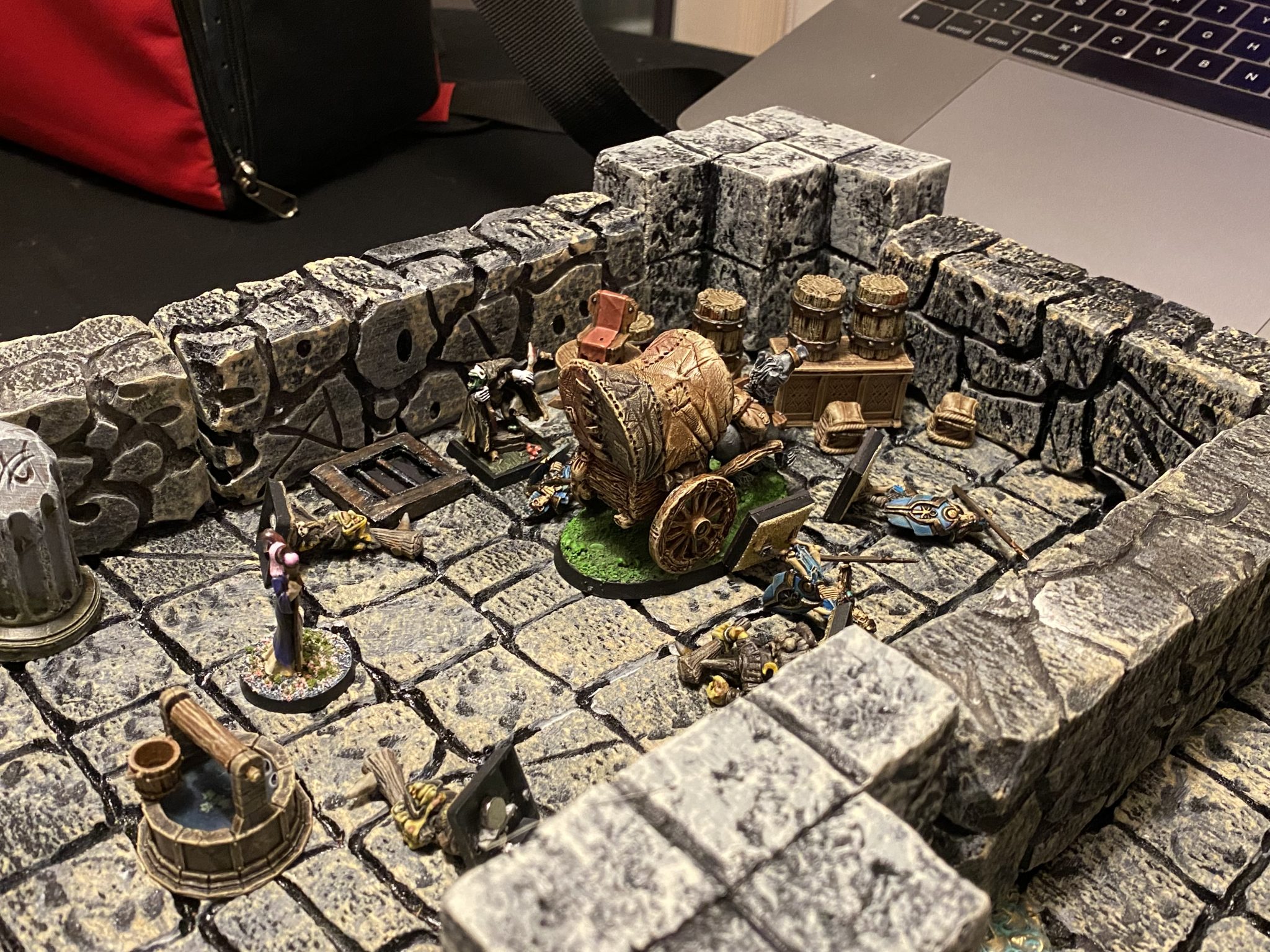 The hooded Goblin brutally pushed Seipora, who had just saved his green ass, out of his way and ran for the exit.

However, the experienced Ranger, took a neat aim and shot an arrow through his left foot pinning him to the ground.

Seipora quickly grabbed her Crossbow and pinned the right foot… unfortunately killing him!

Kaari quickly casr Cure Wounds healing the Goblin and after some quick intimidation, the foul-mouthed Goblin revealed he had been paid by a Troll at the local graveyard to burn the storage down.

The heroes decided to take the Goblin back to the dwarves but unfortunately the fire had spread and they had little interest in the Goblin until Seipora gave them a break by cooling the fire with Frost Ray.

Unfortunately the Goblin slipped away and disappeared into the dwarven mob.

The heroes tried to rouse the dwarves to join them in the hunt for the Troll at the graveyard, but with the fire spreading to other buildings, the dwarves had no hands to spare and thus the heroes went to the graveyard to confront the Troll.

But they found the graveyard full of the ancient Undead guards just standing lingering about. Looking closer, the heroes were sure they had never seen those ancient outfits, armour of weapons before and they concluded that the undead was not risen dead from the graves of clearly more recent dwarven design.

They did notice one of the Undead in more elaborate clothings standing at a hill towards the back of the graveyard. 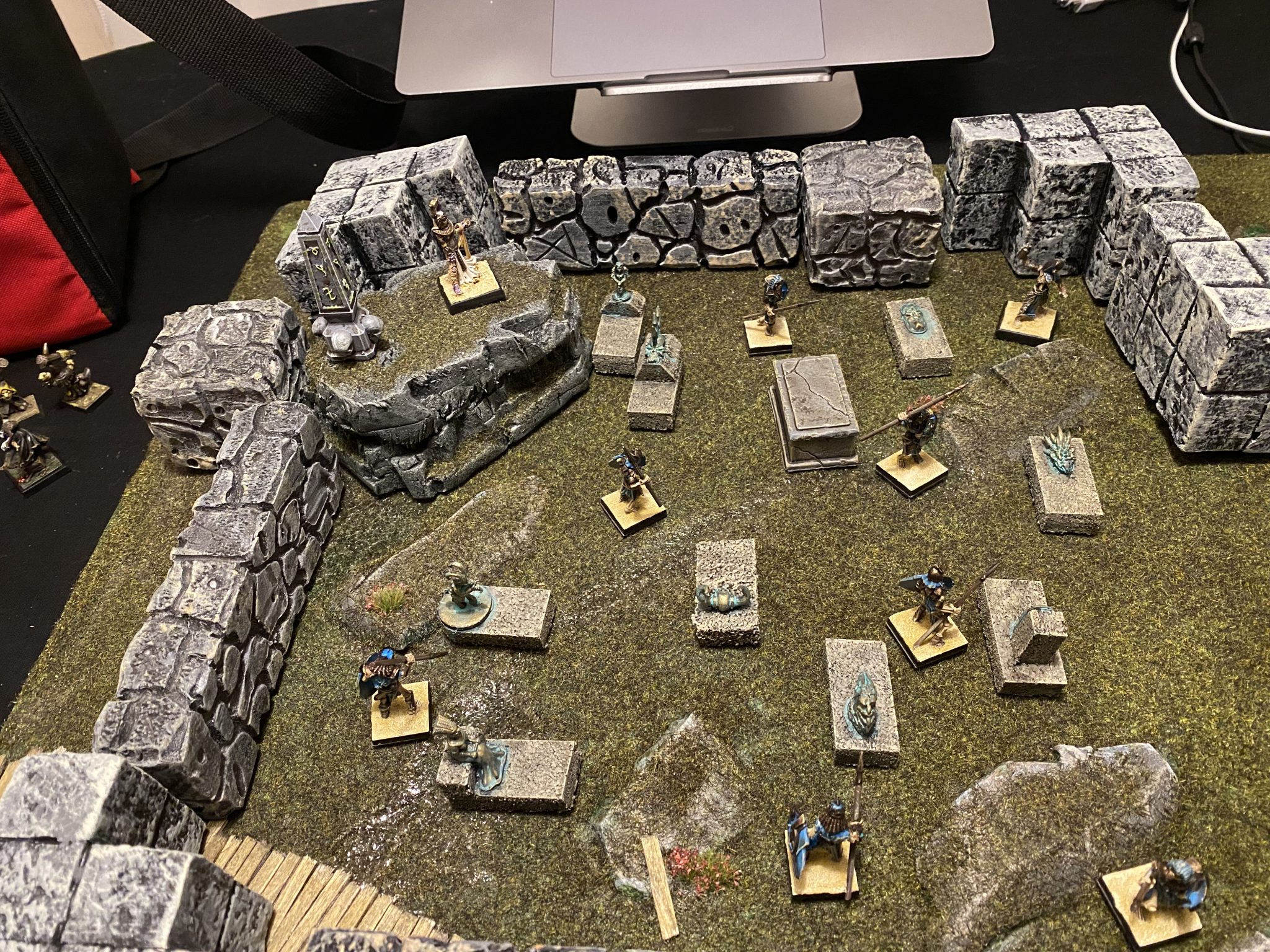 The Undead didn’t seem particularly hostile, but not taking chances, Kaari cast “Pass Without Trace” to allow the heroes to move undetected.

One Undead did notice them and stabbed Kaari. But although it did damage, it didn’t seem to follow up so Kaari, lightly wounded, kept going to the far corner of the graveyard following Seipora.

Kaari then went to the hill where she was confronted by the Undead leader and it became clear the Undead had been banished from their ancient home underground by Trolls. 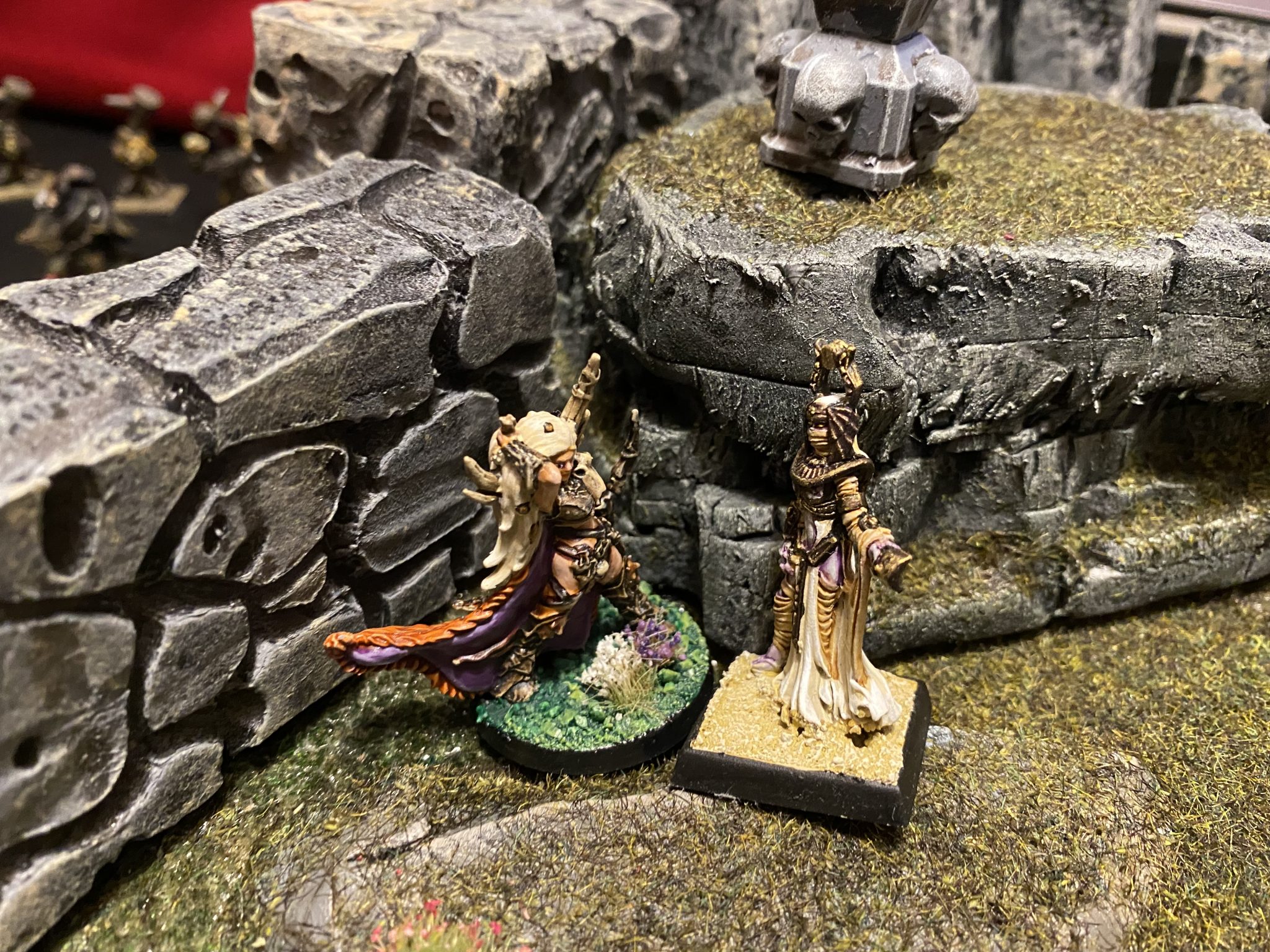 Seipora, in the meantime, was approached by a small undead cat that seemed to have taken a liking to her. 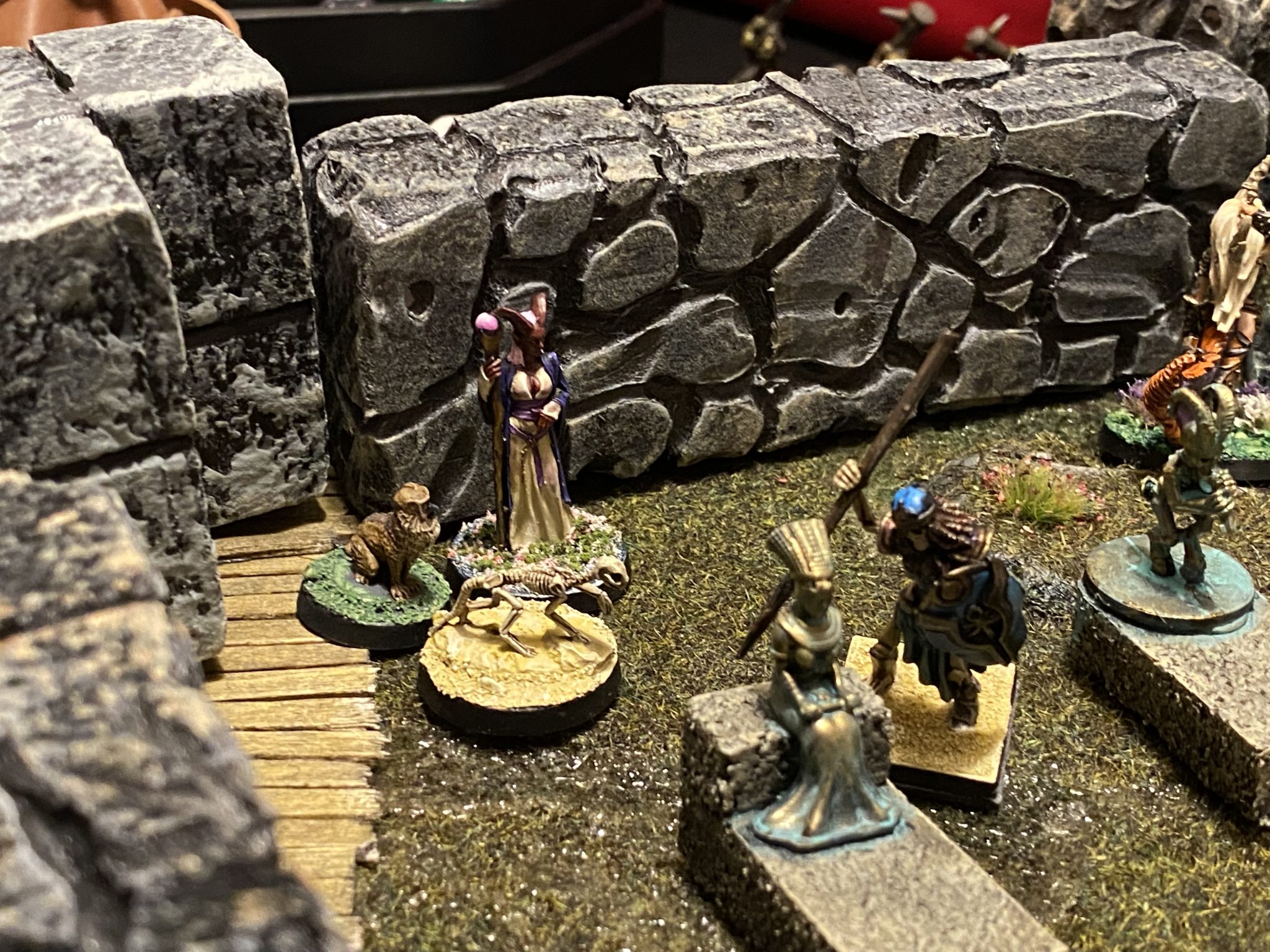 And indeed, as the heroes looked through the graveyard, the skellie cat hinted at a grave that turned out to be a hidden staircase leading deep underground.

The Undead keen to retake their home rushed to the staircase only to be repelled. It was protected by a spell.

but while the Undead were barred from going down, the heroes were not and down they went.

A foul chanting in the air

Sneaking down the stairs, the path led into a larger room  where a foul voice was chanting continuously.

Unable to see the source of the chanting, Kaari snuck closer, seeing a Hag-looking Troll chanting. 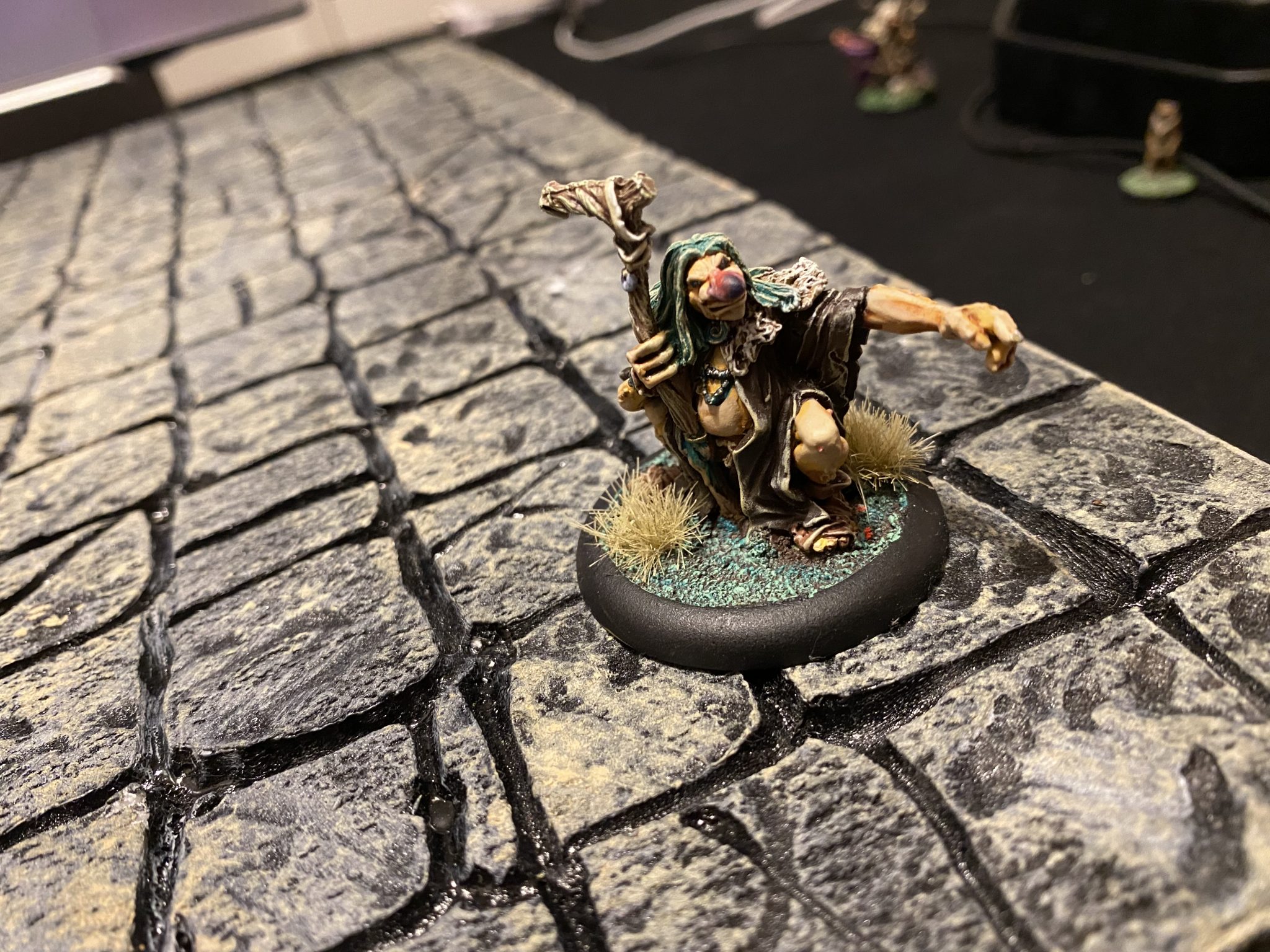 Unfortunately, Kaari also triggered a hidden trap engulfing her in a Fireball spell.

To make matters worse, a huge Troll jumped out from behind a wall. To Kaari’s shock and surprise, the Troll was clad in full plate armour with a massive shield and hammer.

She took a step back narrowly avoiding the massive hammer swinging high. 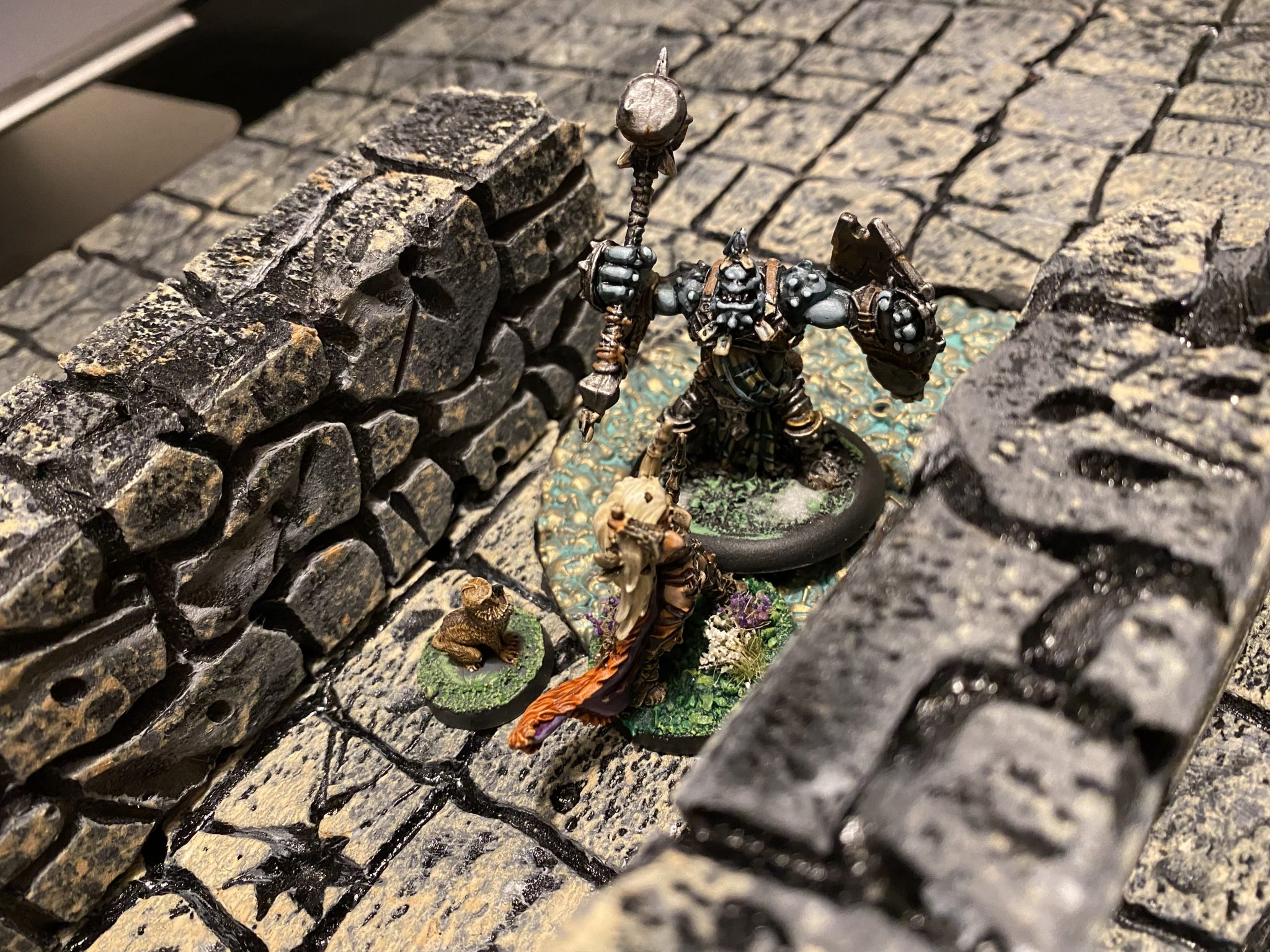 Regaining her footing, Kaari dealt some heavy blows to the Troll using her scimitars.

Seipora in the meantime, tried to disrupt the Hag Trolls continuous chanting, but while the foul Troll took some damage, it did not lose its concentration.

As the fight spilled out into the main room, Kaari was separated from Seipora, who the Hag Troll blasted with a magical beam. Seipora was knocked out fighting for her life. 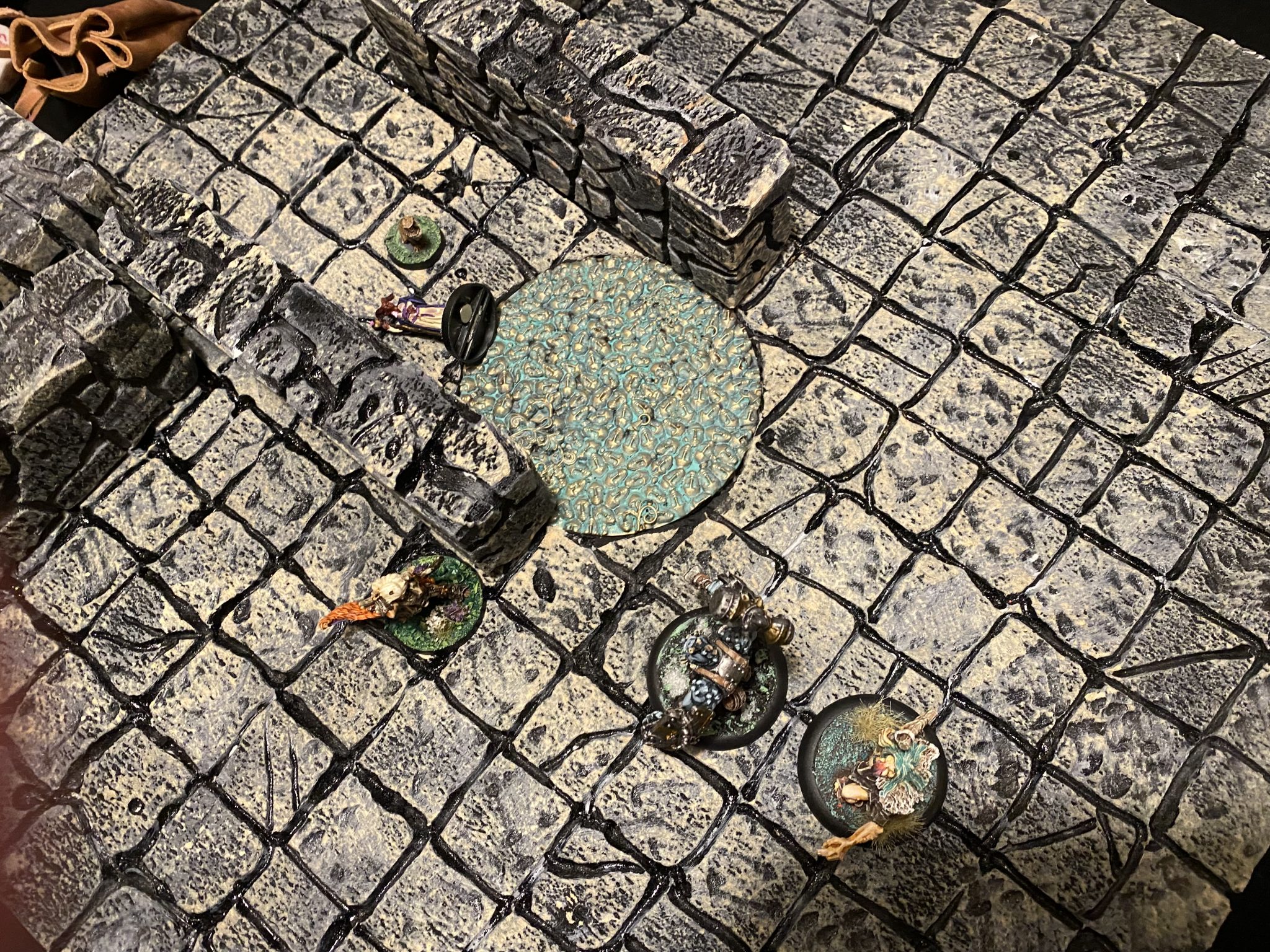 The armoured Troll had moved back in a defensive position of the chanting Hag Troll.

Kaari had to make a choice:

Would she try her luck moving past the Troll standing ready with its hammer to get to Seipora to save her?

Or should she try to even the odds by attacking the Trolls?

In the end, Kaari jumped into a better position to shoot at the chanting Hag Troll and using her Sharpshooter Bow, she finally broke the Hag Trolls concentration and the undead army of the ancient soldiers came flooding down and over the Trolls leaving no trace of neither the Trolls nor themselves.

….except for the little undead cat that chose to stay with Seipora.