So this is it! Golden Growler UK 2001 is over and what a blast. I will not reveal the results here that will all be up on www.wargamesunlimited.com, I can reveal that I did not win.

I must say it was a strange weekend, my vanguards didn’t do any good, my cyclops were rubbish. The two I always rely on!

BUT my Rad Troopers kicked ass, and my chem grunts were waaay better than normal…. oh yeah, this was also my first chance to use the typhoon. Cool thing! It definetly adds the range I have longed for to my army.

Below are some small paras of the battles with some pictures I took, but they are not the best quality. I need a digital camera.

This was my first GG battle and I face the opponent I feared the most: Dwight with his arsenal of zone templates.

We played the take and hold mission on the City Terrain with the chilly ancient battleground terrain effect.

That board was a pure death trap and was the most interesting composition of mission, terrain and terrain effect of all boards (I didn’t try the ice or the pharon table though)

I think it start out quite good for me, I mange to hit the Ares with the Wolverine, giving it one wound and a second wound from internal damage. The my Rad troopers ran for the objective and one of them still had enough MP to fire his Assault rifle, the only thing he could see was the Ares. Bam! And the Ares was gone shot down by a Rad Trooper.

Dwight dug in his drones on the objective but I managed to get rid of them.

But not due to my Typhoon crawler which manage to hit nothing for the entire game!

Towards the end it was clear I was going to loose, but it was a question of whether I could hold anybody on the objective.

But no, we managed to play 10 turns which was enough for Dwight’s Power armoured Commander to smash all Neo Soviet skulls he came close to, and at the end I was totally annihilated.

This game was the most interesting tactical game, especially because we were very equal until the last turns where the wargamesunlimited.comer went totally blood thirsty 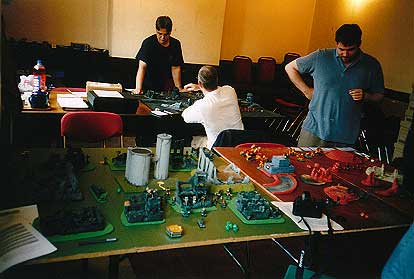 The city table on the left. On the right the Mars table with Ebon-Keshik looking worried

Playing on the Mars terrain we had the find water mission. At only 8MP the Zyhkee was hard pressed from the beginning although I had the Cyclone terrain effect smashing through my troops.

I found water pretty quick while the Zykhee couldn’t find any. And on top of that my useless Typhoon crawler turned out to be not so useless after all!

Everything pretty much worked, as it should. Vanguards hit what ever they aimed for and even the Rad Troopers did okay picking up the last water supply in front of the desperate thirsty Zykhee (which turned out to be empty).

At the end all the Zykhees were gone except for one who was trapped in the cyclone (Come out you bastard, I can see you are in there) but at the end he was thrown out and landed 5″ from the Vanguard carrying the Wolverine! He did not kill him but the rest of the Vanguards did! 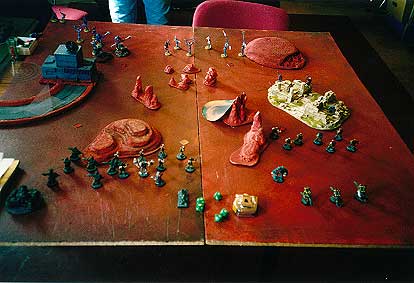 Yep, the cyclone was a problem 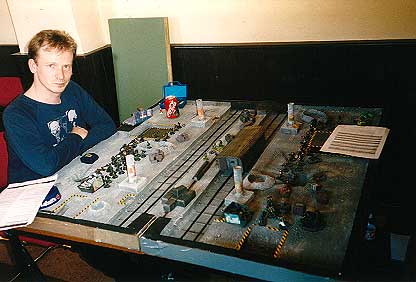 GavBot is ready for battle of the Komrades

Third battle was against Gavbots Neos on my Neo Soviet Underground table, wa-haaay! We had the get the goo mission and the zombie terrain effect (which was killed of the first turn)

At the end Gavbot almost killed none of my troops, but that does not reflect the battle at all!

Seeing the wave of chemgrunts and Rad Troopers at the beginning made me think twice about moving headlessly forward, and Gavbot’s small units gave him a lot of flexibility, which scared me. Each turn when I was done, he had 2-3 or 4 units still to move.

But I had the fire power and I used it as good as I could but I must say my Vanguards didn’t do all that well and I cannot remember the Typhoon doing much, although it did land a shot in the middle of Rad Troopers and chemgrunts killing quite a few after which one of the chem grunts exploded killing even more.

So I was winning..then Gavbot suddenly decided to change from kill people tactic to get the goo!

This was a very good decision since most of my troops were held up by different other engagements. So he grabbed the goo and started to run towards the table edge, and I realised that he had a seriously good change of pulling it of!

From that point Gavbot used all his troops to hold my main force in Close combat (or killed them with Chemsprayers) except for a few who acted as bodyguards for the guy with the Goo.

But finally my vanguards started to work and they shoot the goo-guy, but then another picked it up, but threw up, the another picked it up get shot etc etc. This continued all the way down to 6-8″ from Gavbot’s table edge where the guy carrying the goo pucked and dropped it again, and the game was over, phew pretty damn close. 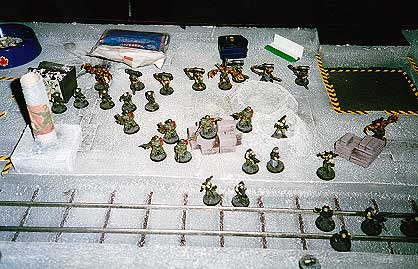 Back to the city table for the fourth and last game, but I was totally worn out by the game against Gavbot so I didn’t think straight and forgot to move whole units of Rad Troopers several times!

I use pretty much the same tactics as against Dwight in the first game, which was successful although I lost. Run for the objective and try to stay there.

The Shards turned out to have the firepower I feared in the Union army, they didn’t go for the objective but stayed at safe distance and shoot my troops down, my wolverine and typhoon were caught up in trying to killed the very effective Striders which I face three of! I mean I don’t want CC: 7 and mass destruction weapons. But with LIF of 4 they were hard to kill.

At the end I was annihilated again, but this time there wasn’t really any doubt at any point because my troops didn’t perform too good and I forgot some and made foolish decisions with others because I was completely thrashed after the battle against Gavbot. I could definitely have used my Chem grunts better.

Hicks on the other hand used his troops to the max and outmanoeuvred me by simply being more flexible with his small units of very though shards with very good saves.

Oh one last thing: I want a Shard army, they are cool!