DM notes: I was asking my wife, one of my players, what to call this chapter and she suggested “smart choices” as the party actually managed to go through the whole game with minimal (and only absolutely necessary) combat. I only realised that at the end when she pointed it out. I was totally blown away. Fantastic game!

Seeing the exit, the heroes parted ways with the goblins and headed for the exit.

Here they saw a small guard post, armed with dangerous bolt throwers, guarding the exit, which was also covered by some mechanism with saw blades. These would be hidden from any intruders, but since the party came from within the Drow army camp, they saw it in plain sight.

Rather than a full frontal assault, the party opted for a more stealthy approach using the tents as cover. As they arrived in the strategic positions, the Tiefling Sorcerer Seipora cast Phantasmal Force on two of the guards and Thorga the Dwarven Paladin, cast Abjure Enemy on the third. 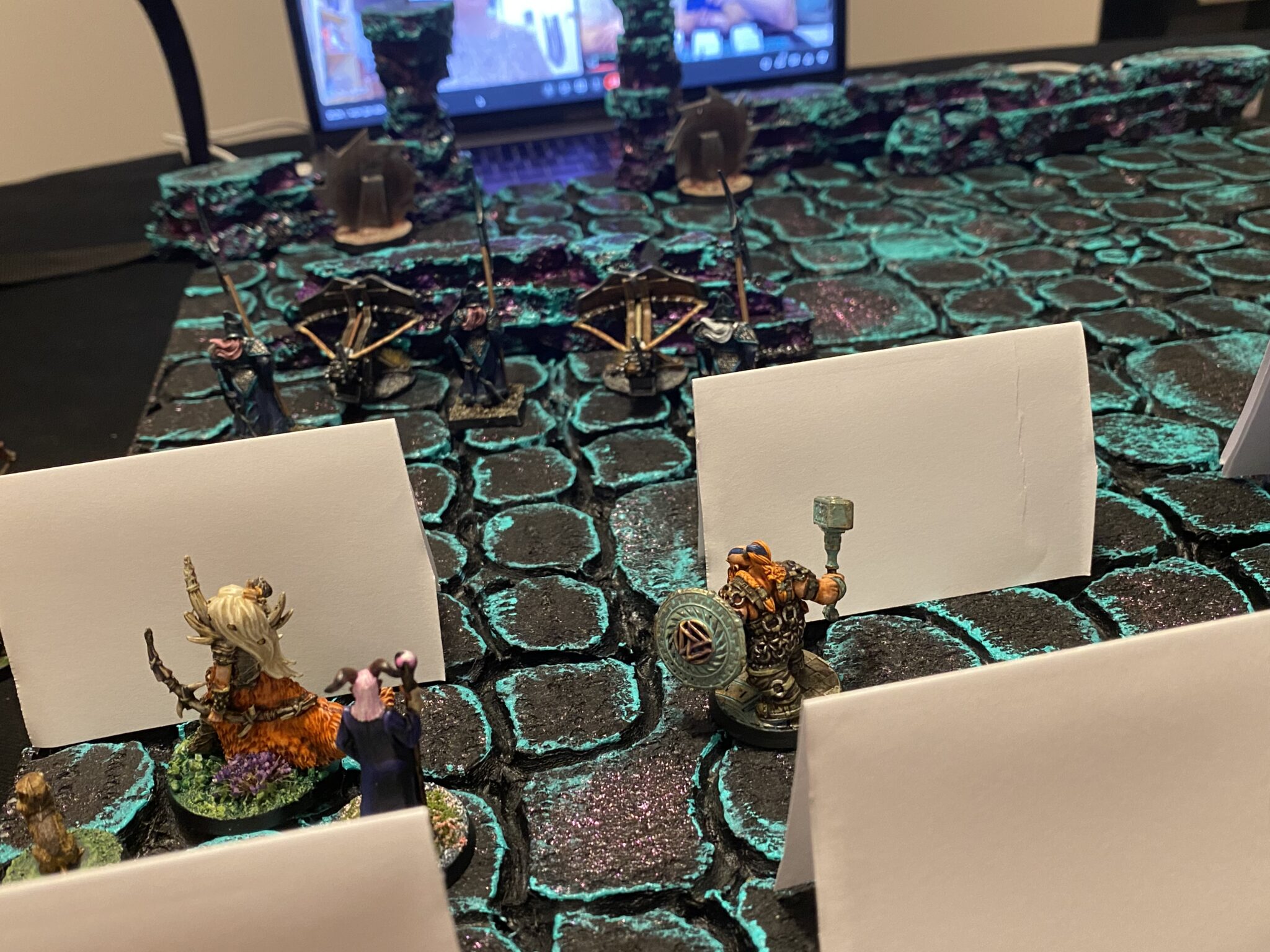 One Drow guard started fighting imaginary foes while her comrade looked puzzled at her actions. And the third guard, although she contained her fear, still was rooted to the spot.

The party took advantage of the situation and quickly dispatched the three guards, but not until they had sounded the alarm. 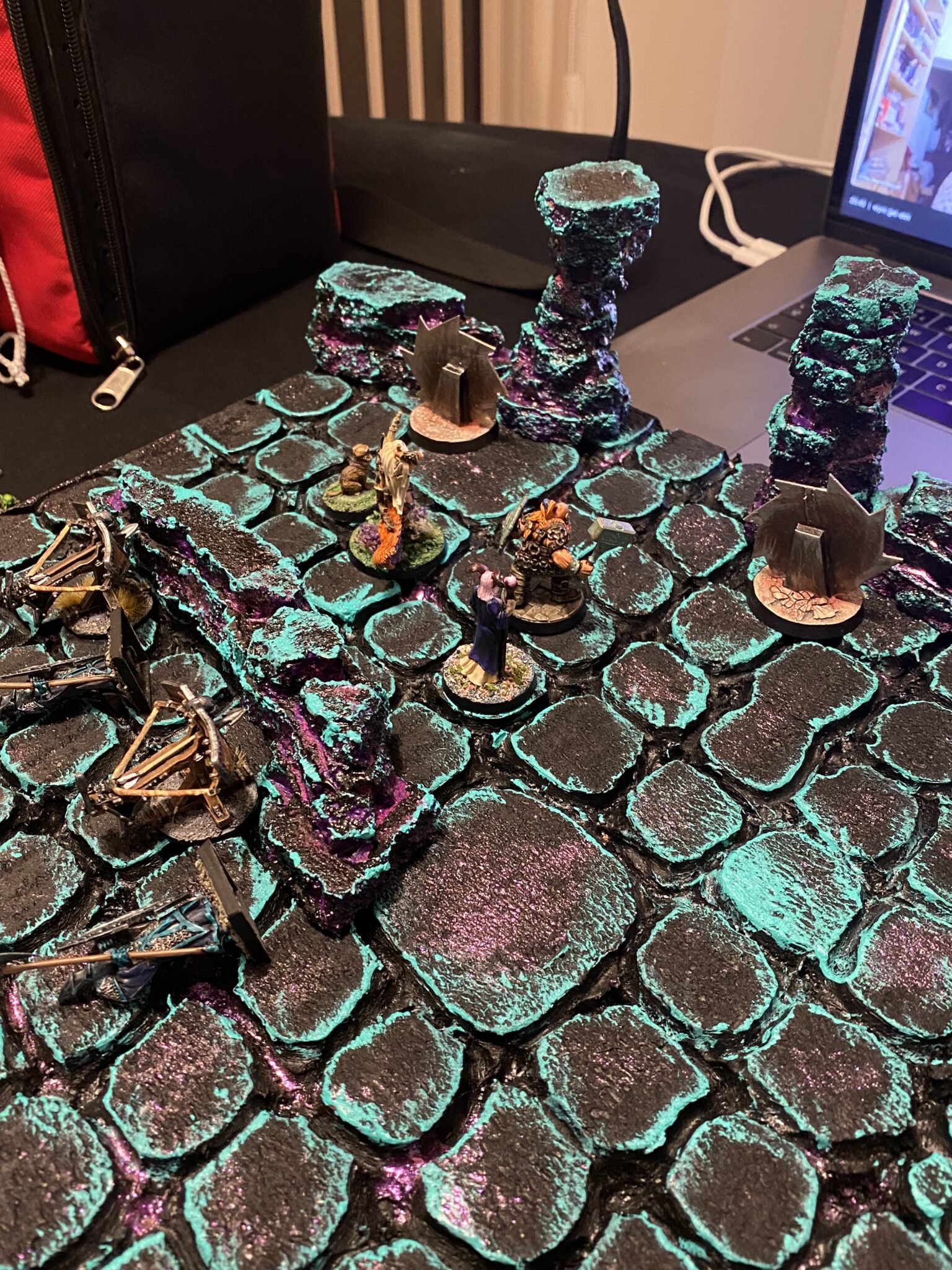 Thorga pulled a lever to disable the saw blades and the party ran for the exit wirth dozens of Drow warriors in hot pursuit.

Soon the party to a fork in the road. Should they follow the Drow made tunnel up and out, or take the naturally and highly unstable path that was barred with a plank of wood with “Danger! Do not enter!” written on it?

The decision was made to quickly and quietly step into the unstable tunnel and see what the Drow would do and it soon became clear the Drow would keep occupying the other way.

With no choice, the party headed deeper into the unstable tunnels

DM notes, I used a modified version of Runehammer’s Shattered Stairs room design for this one.

The party entered a massive opening in the caverns, the ground totally disappeared with only pillars in between.

And to add to the situation, the exit at the other end was crumbling as this newly formed cave was collapsing. 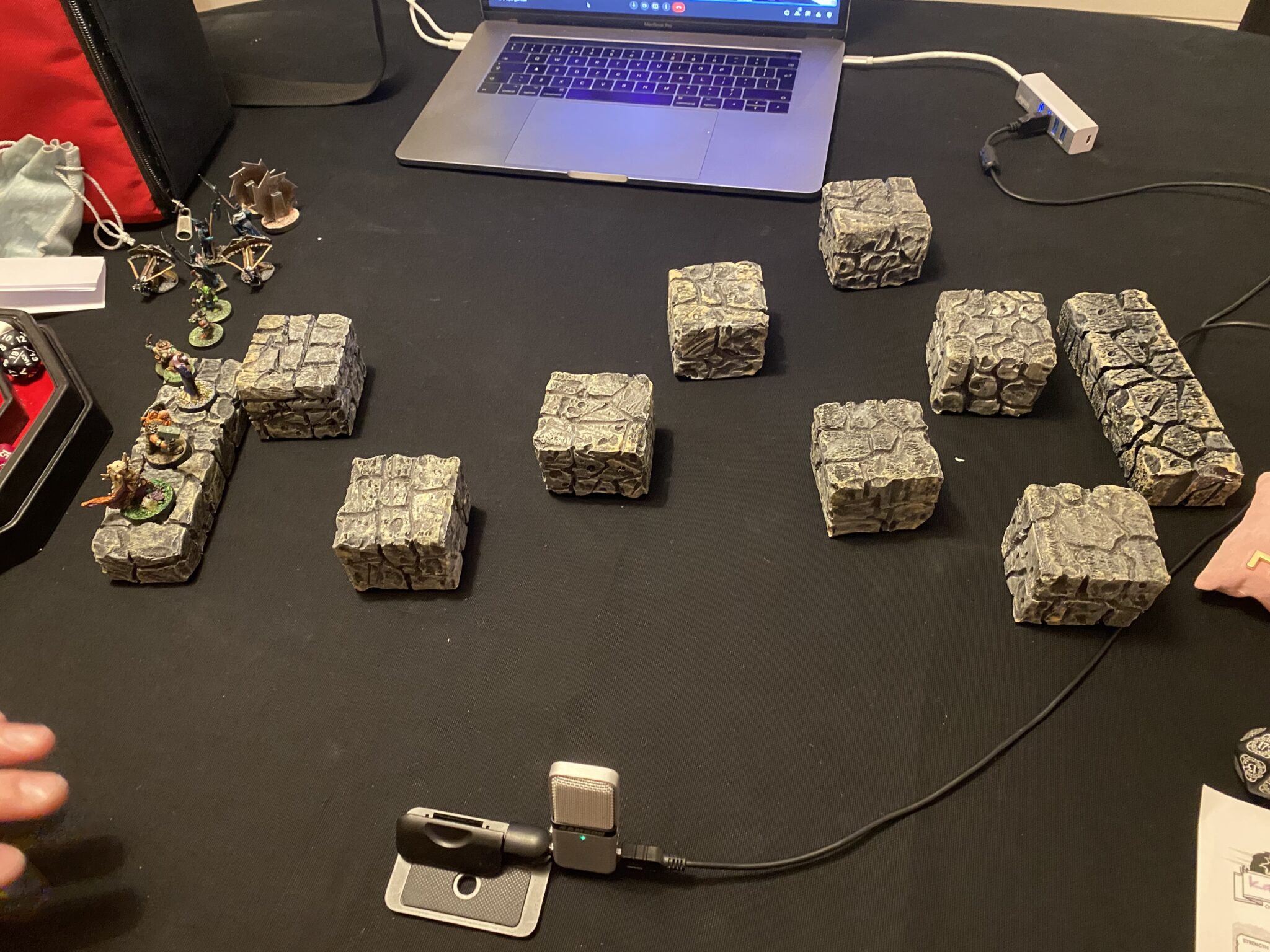 The heroes started jumping between the pillars, but was caught by surprise when strong wind started blowing up… carrying a laughing Spectator Beholder up past them and up out of sight.

Confused by this spectacle, the party hesitated but continued and soon the wind came crashing down again with Spectator this time firing rays at Kaari the Ranger, but without doing much damage.

With some daring stunts the party made it across only just in time for the whole cave to collapse, but they made it out into the bright sunlight. 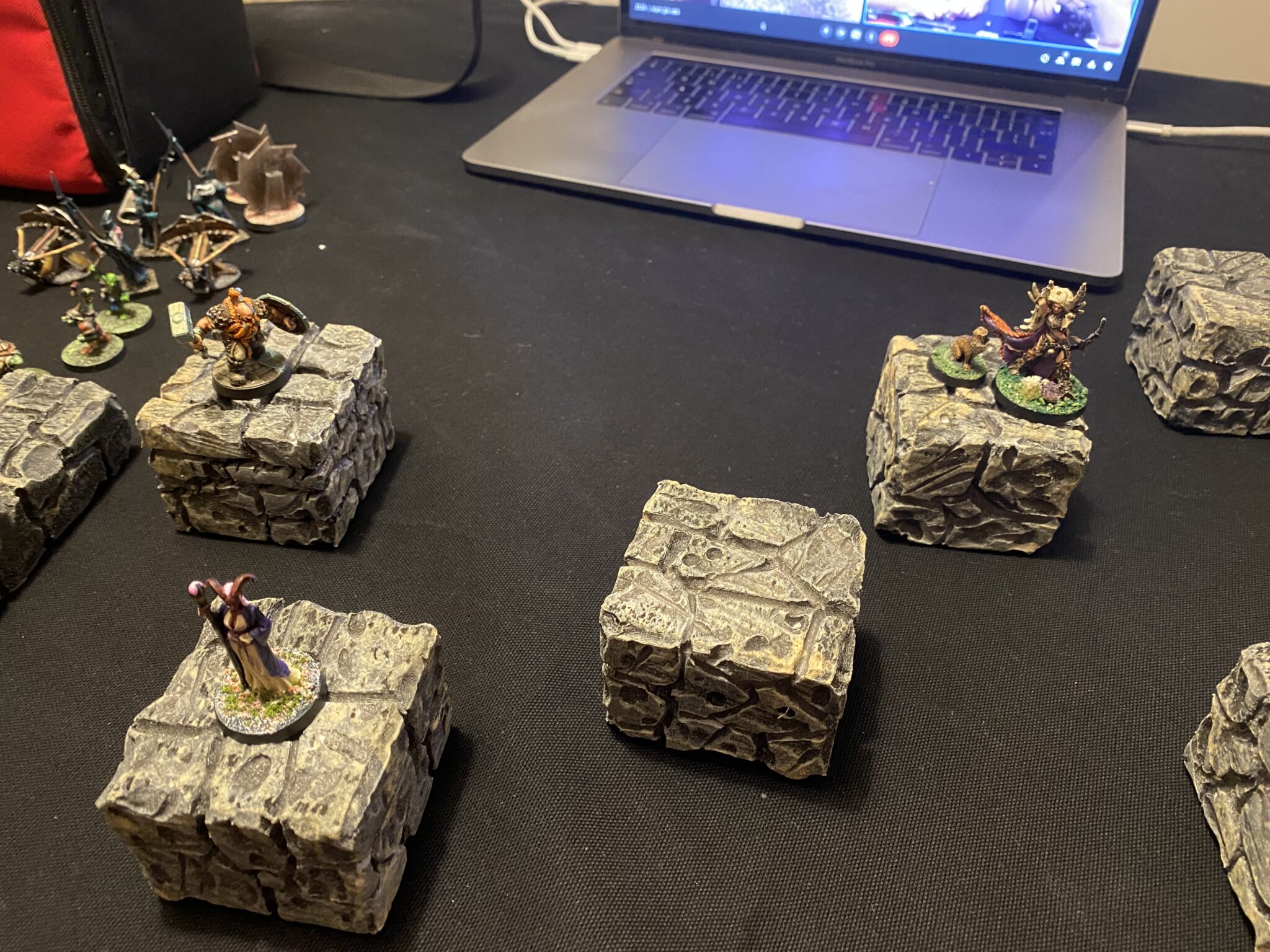 Eyes adjusting to the sun, the heroes saw desert as far as the eye could reach. Below the Drow army was exiting slowly but surely, in the comfort of a magically altered shadow of the mountain.

The party had to look for another way and spotted an Oasis to the North in the distance. But before venturing down, they decided to climb up the small mountain to survey the landscape and what the saw to the South blew them away:

The proud range of mountains cutting across the entire island of Obanastre called “Titan Heights” was no longer a straight line.

Instead the middle of the mountain range, the area where the capital of Obanastre, “Dragonskeep“, used to be, was torn to shreds as if a huge explosion or impact had scattered the mountains. Was this a result of the same incident the party had witness before they were teleported to the Underdark?

Furthermore, they could see the Drow army heading to that very area.

Sanguine Well and Desero the Dazzling 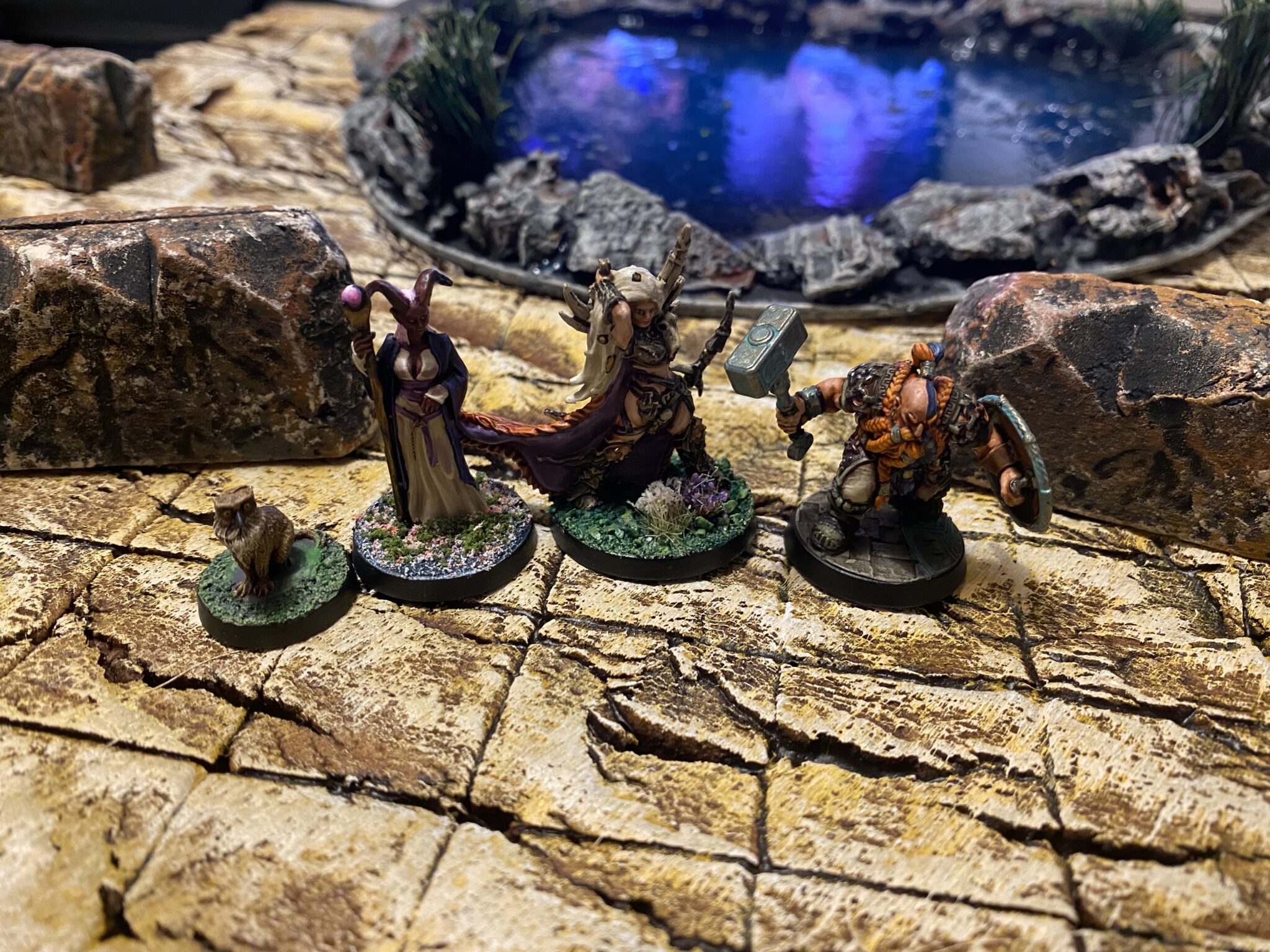 Having digested what they had seen, our heroes climbed down the small mountain and by late afternoon they had made it to the oasis Sanguine Well. 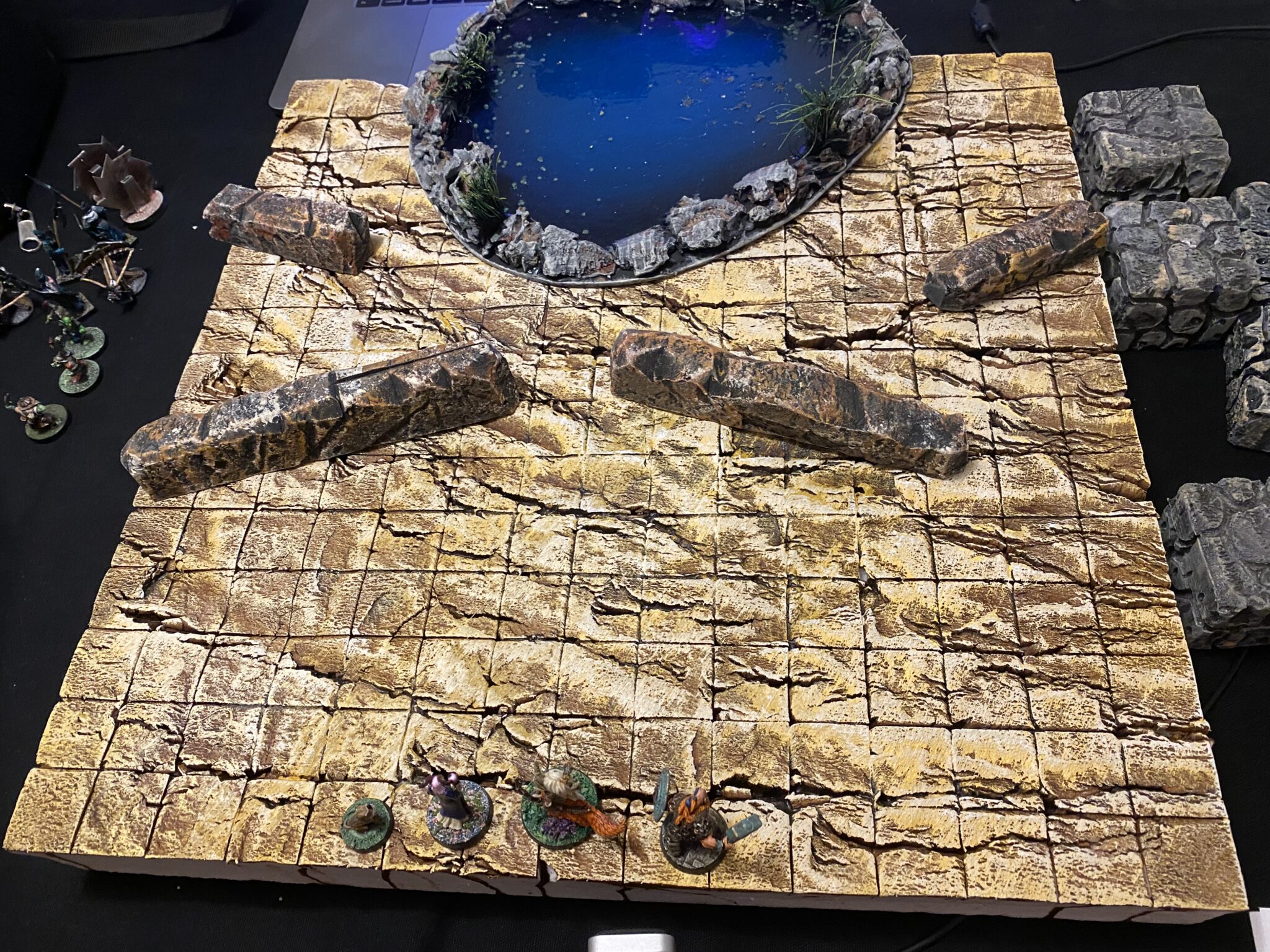 Very happy with my desert board!

Here they faced a group of blue Kobolds, but given Kaari managed to sneak right into their midst without causing any harm, the Kobolds were curious as to her intentions. 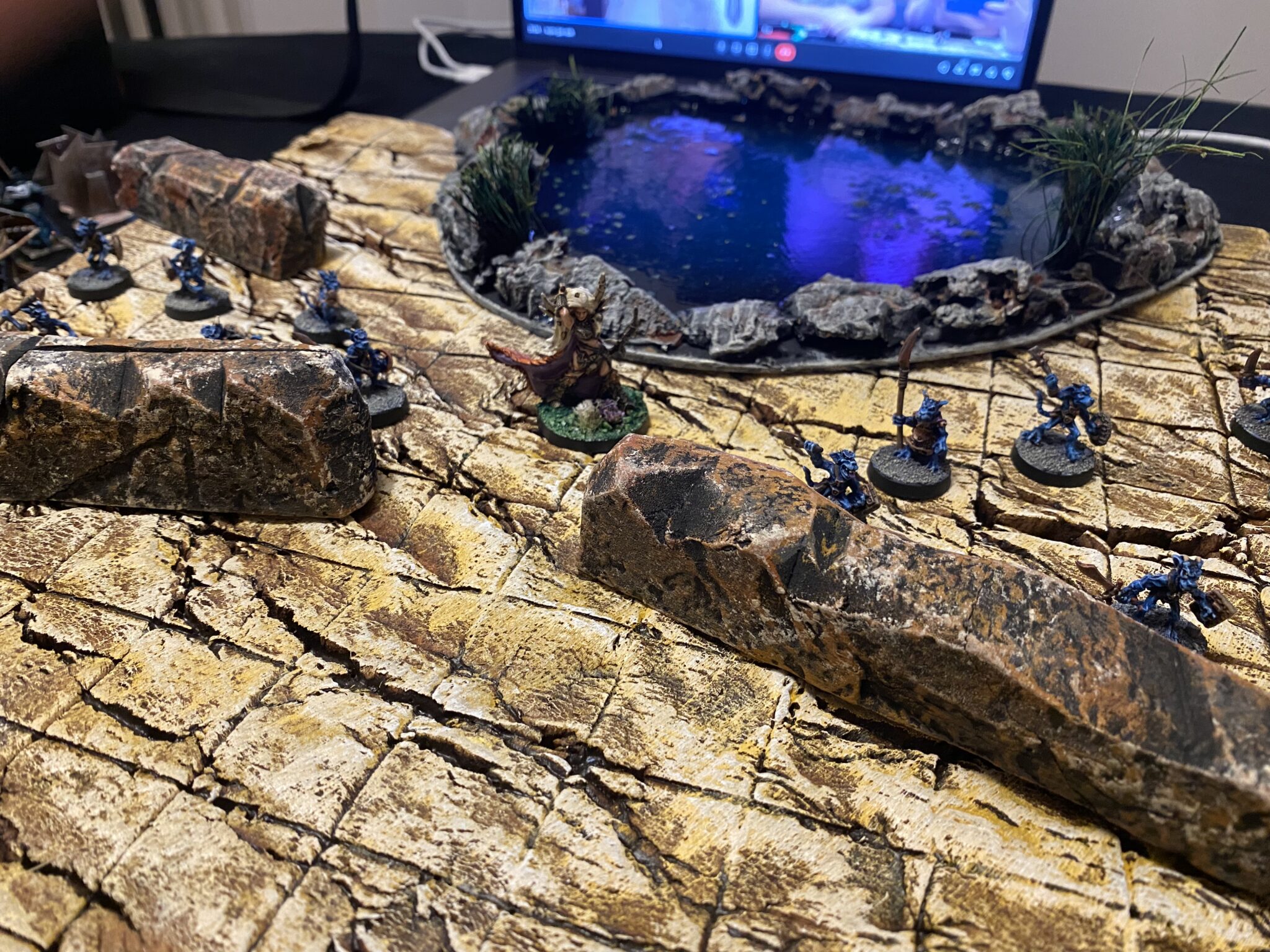 And soon through some smooth diplomatics (including allowing the Kobold Captain to pet the Owlbear Cub), the Ranger had made friends with the Kobolds and the party was welcomed into the oasis. 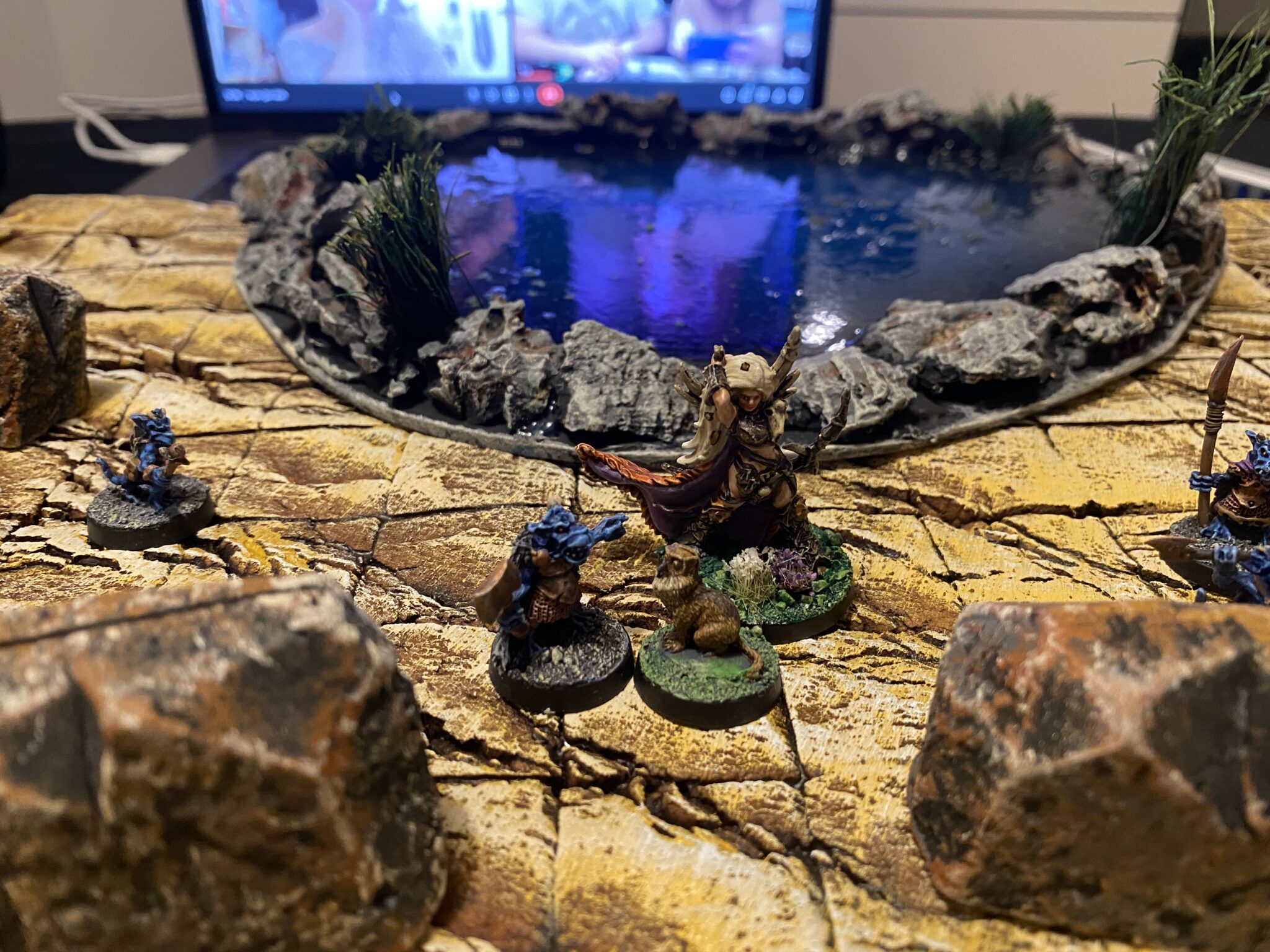 It was clear the little dragonkin were worshipping Desero, but without any indication of what this entity was, Thorga decided to quench his thirst and fill up his waterskin.

As he disturbed the water, a young Blue Dragon named Desero the Dazzling appeared. 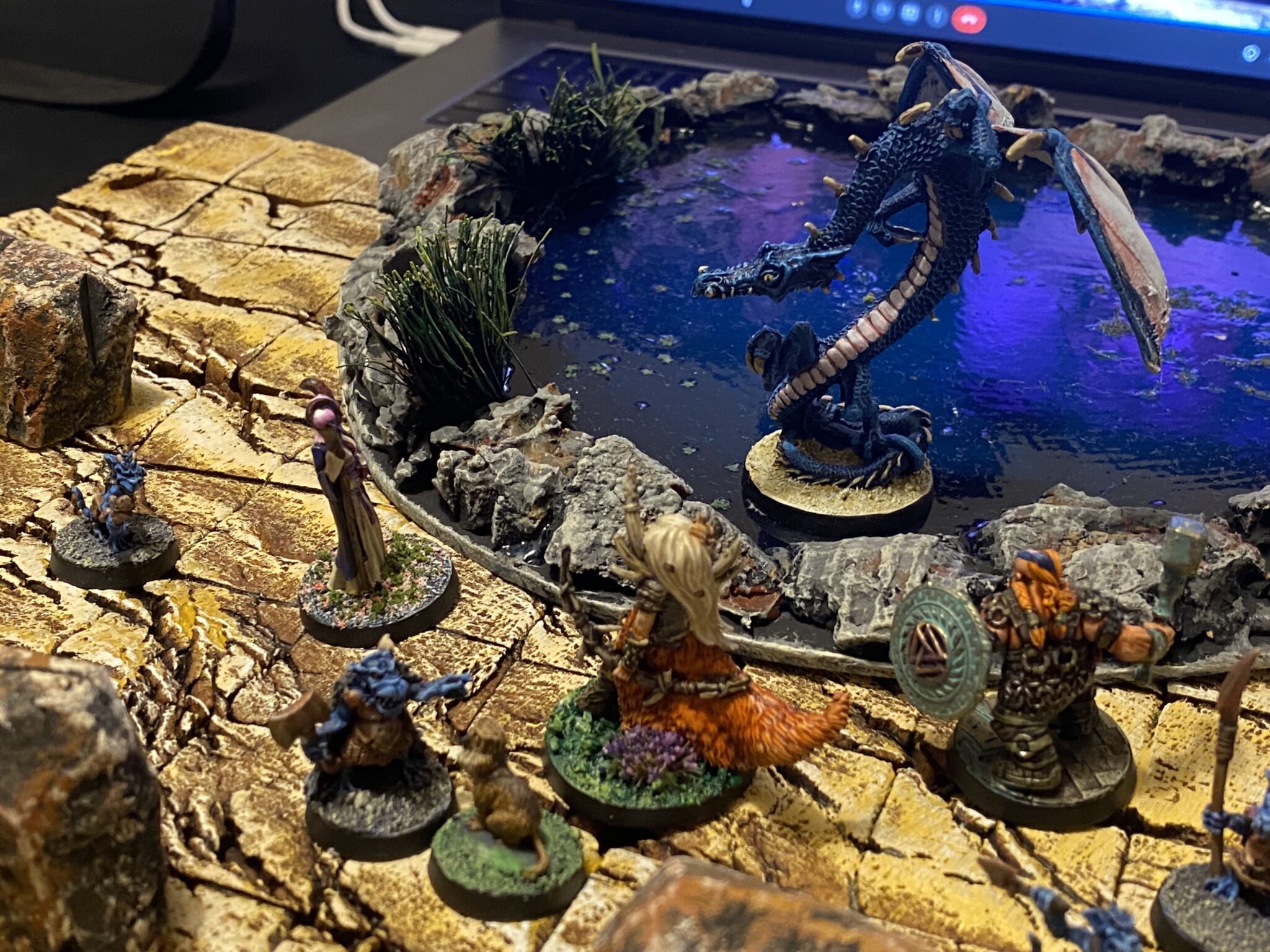 But while she was an impressive creature, Thorga was sure she was nowhere near the size of an adult dragon and this was confirmed by her youthful and undamaged scales and wings.

The party quickly realised this was a very young and very vain dragon. Dangerous, but susceptible to flattering and charm.

The dragon welcomed the party and took her leave after leaving Drow orders she had obtained.

Oh this is bad

The party read through the Drow orders that confirmed the Drow army they had seen was heading for Dragonskeep hoping to defeat High King Regulus Tappo’s army.

But the orders also revealed that a second hidden army, possibly of dwarven origin, was moving from underneath Magmaforge, the home of the dwarves to the South.

The High King’s army would not be able to withstand a surprise attack of this magnitude and even if they were made aware, would they be able to defeat two forces at once?

Exhausted the party fell asleep and left answers to be found in the morning.

Summary of what the heroes know 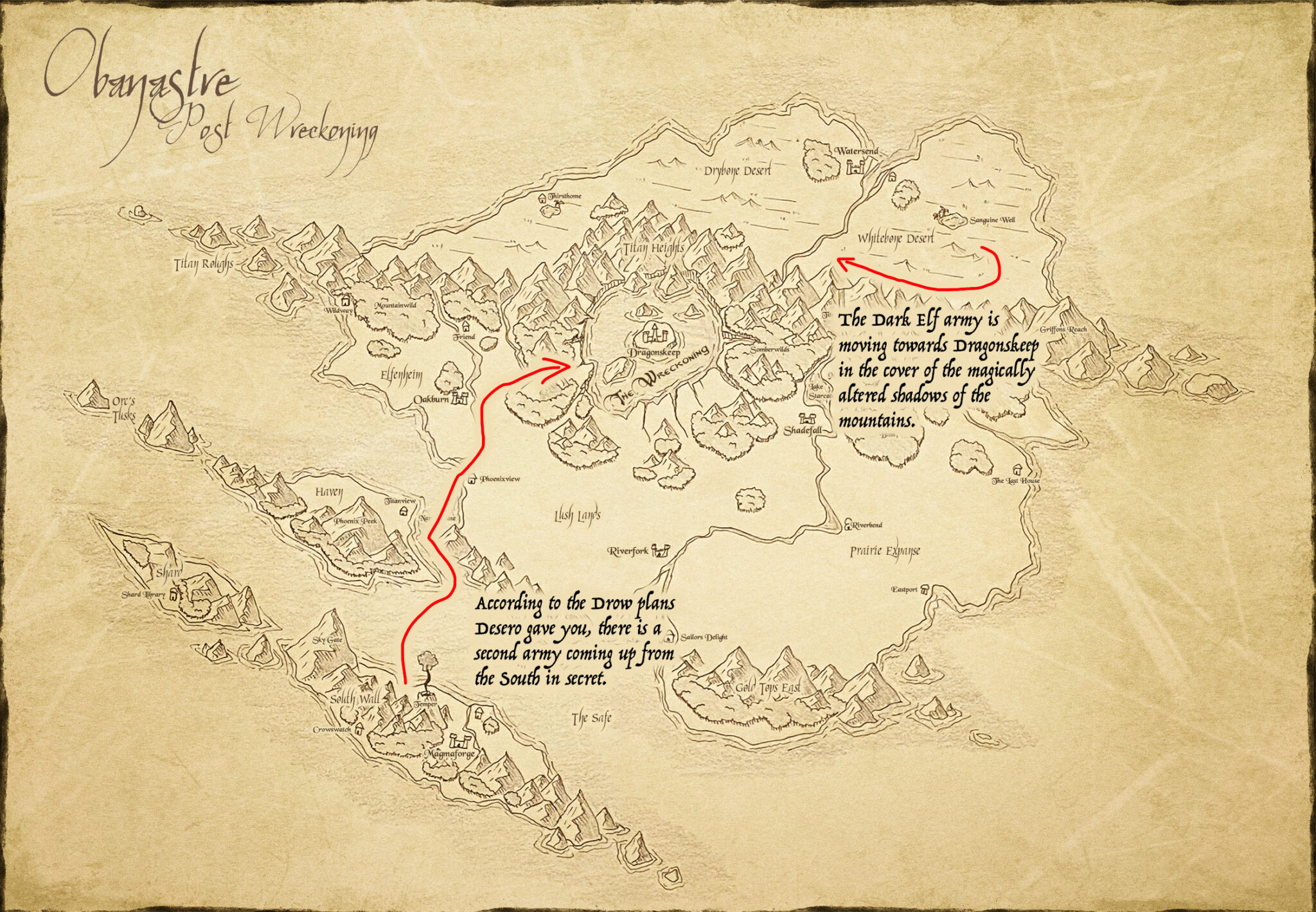 What will our heroes do next? 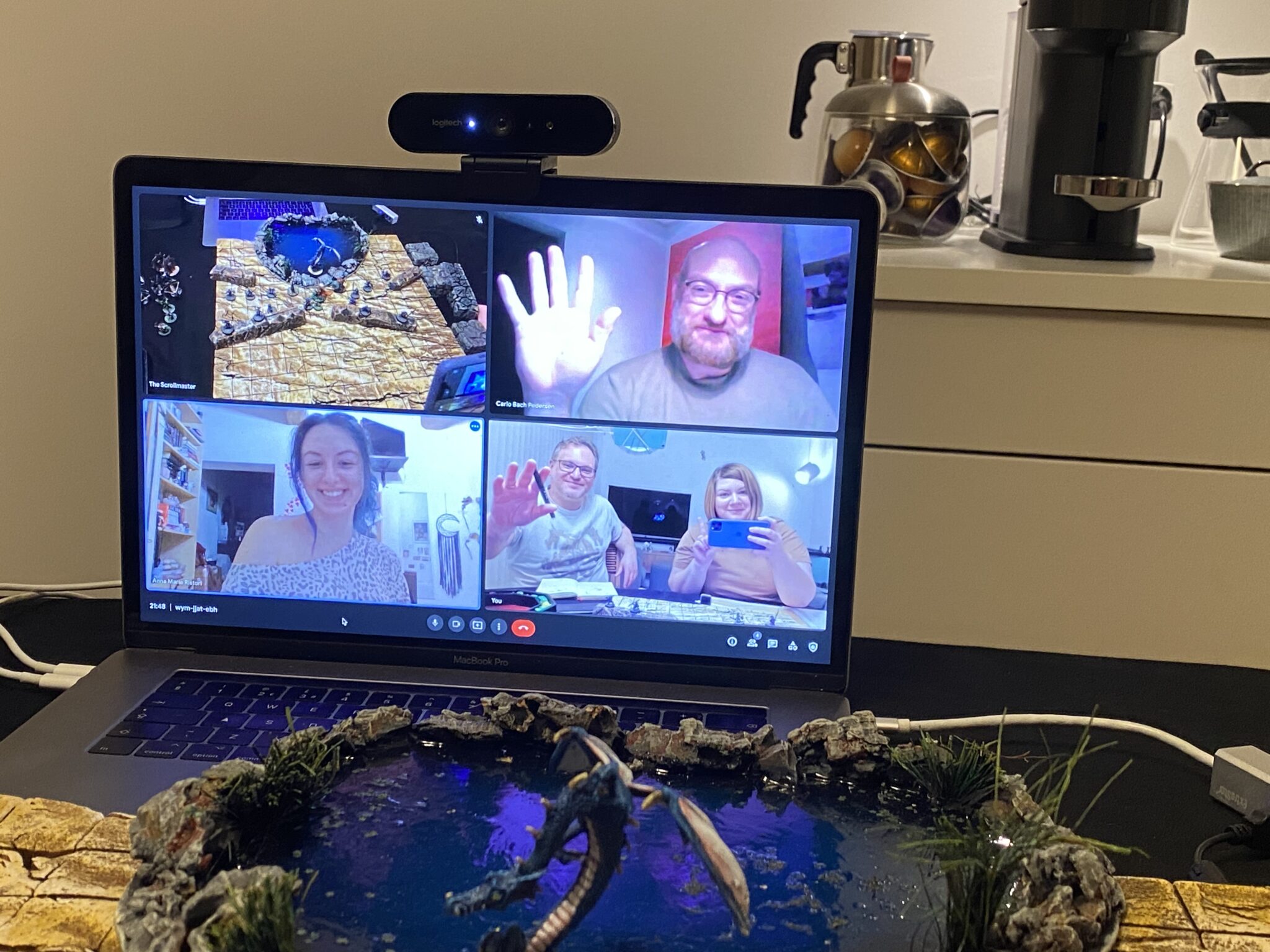