DM note, my wife and I often sing “Dancing. People” in the style of the song Purple Hat and since I was painting mushroom people, she started going around singing “Mushroom. People”… hence the title 🙂

Seipora, faced with a moving, but chained, mushroom, started talking to the mushroom, while Kaari and Thorgga looked at her puzzled.

But the little Myconid Sprout, released some spores that allowed it to communicate with Seipora using emotions and soon party understood it was scared of following the carved hallway leading up and potentially out.

Instead it released emotions of home and safe when the party made moves to go down a hidden natural tunnel leading down. 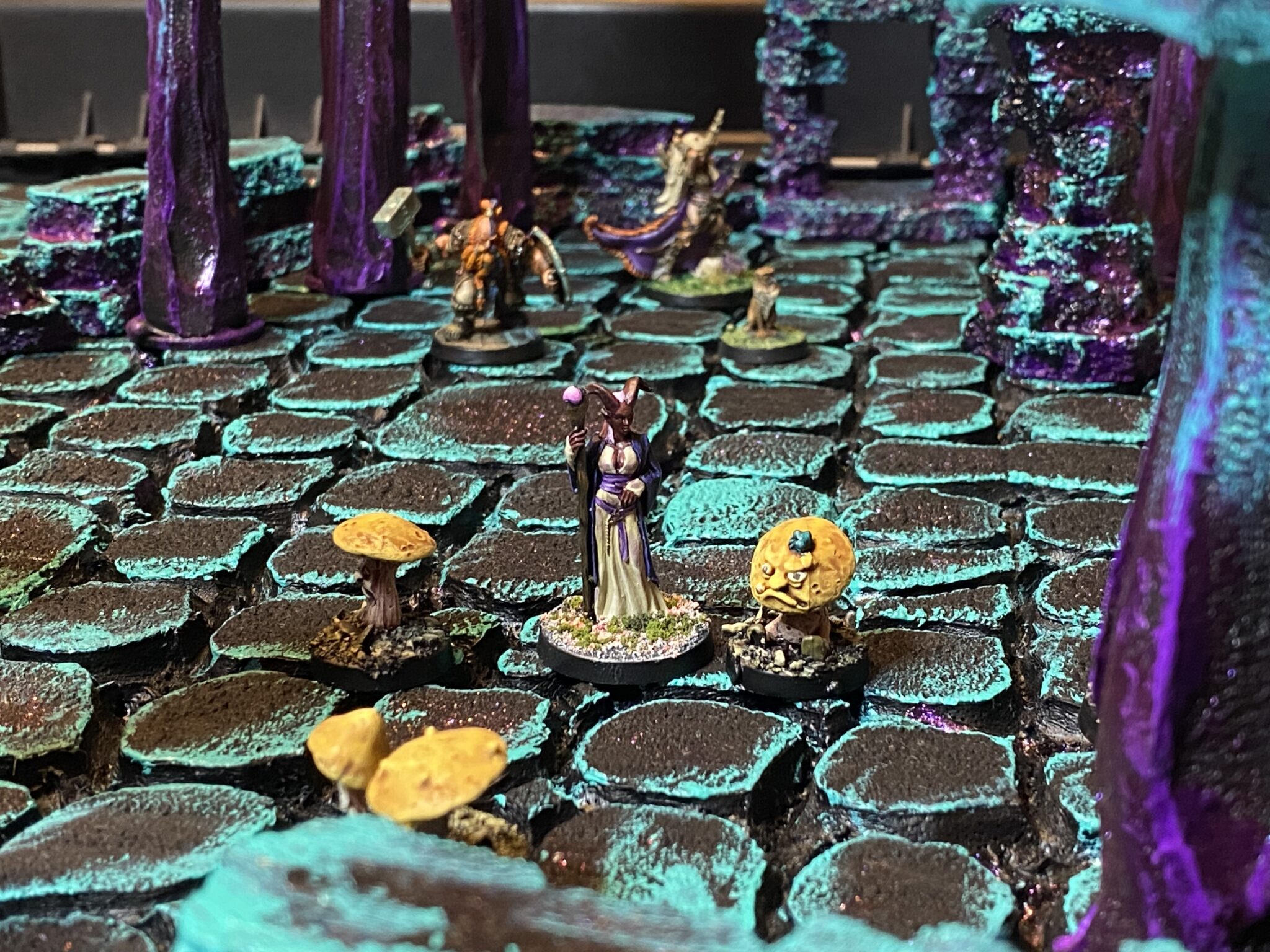 In the end the party followed the emotions of the two Myconid Sprouts and went down and down the dark naturally formed tunnel.

The tunnel lead to a cave full of obstacles and human being standing absolutely still in the dark. Thorgga made his way in only to discover the poor humans had mushrooms growing out of them.

Little by little the party edge forward on the encouragement of the Mycoid Sprouts, but Seipora, having started to feel uncomfortable about the situation, decided that the best way to avoid an ambush was to attack and in a quick move, she sliced one Myconid Sprout in half, which to her surprise released a mental blast of pain that everybody felt. 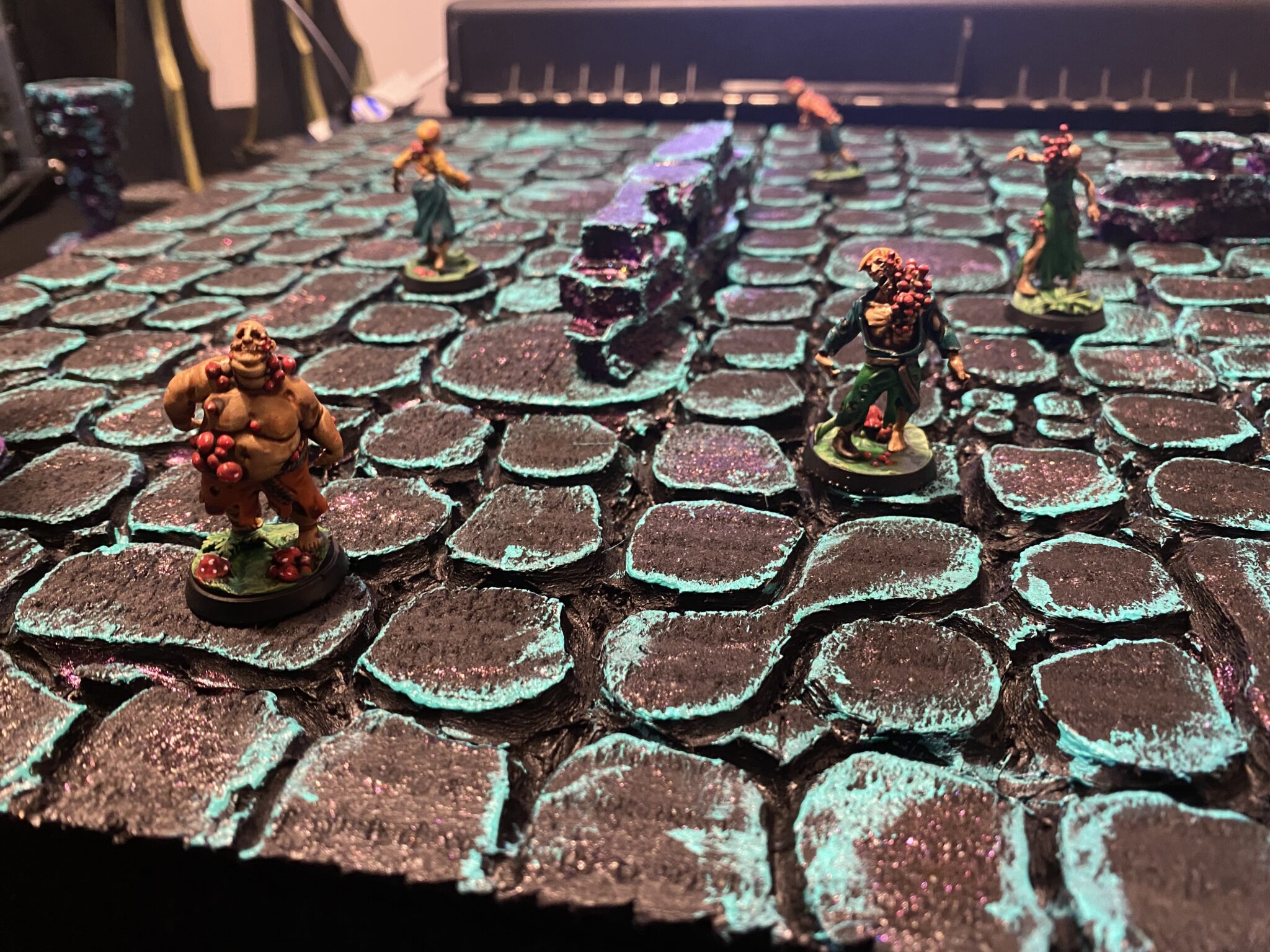 It also seemed to activate the otherwise dormant mushroomed people who made their way to the dead Myconid Sprout attacking the heroes as they stumbled into them. 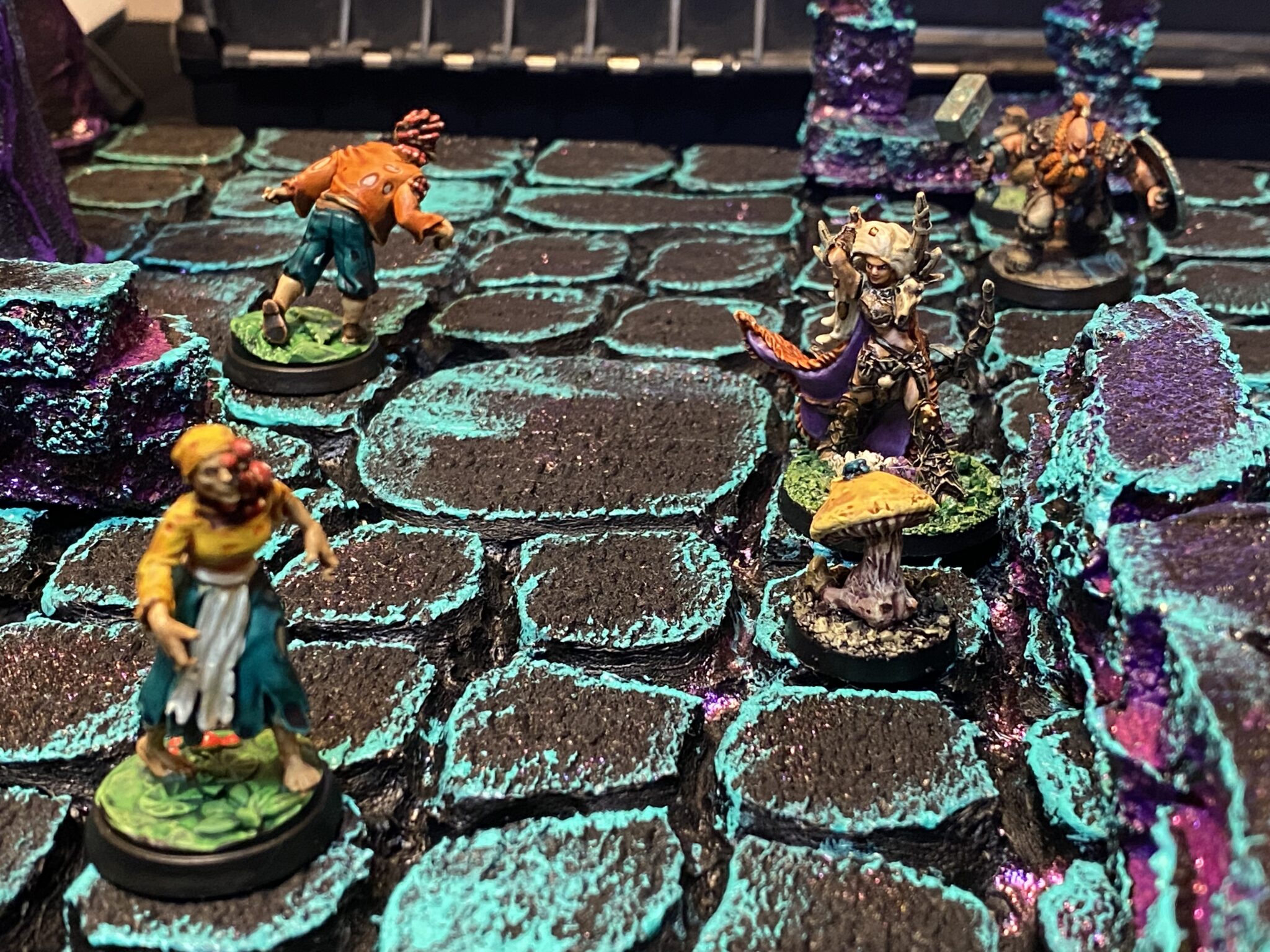 A fight broke out and the last Myconid Sprout made a run for it to reach the exit in the far end of the room only for Kaari to shoot it dead with a single arrow.

Thorgga faced some problems a particularly tough mushroom zombie, but Polly the Owlbear cub, ran to his rescue, jumped on the zombie and with a natural 20 pecked its head off! 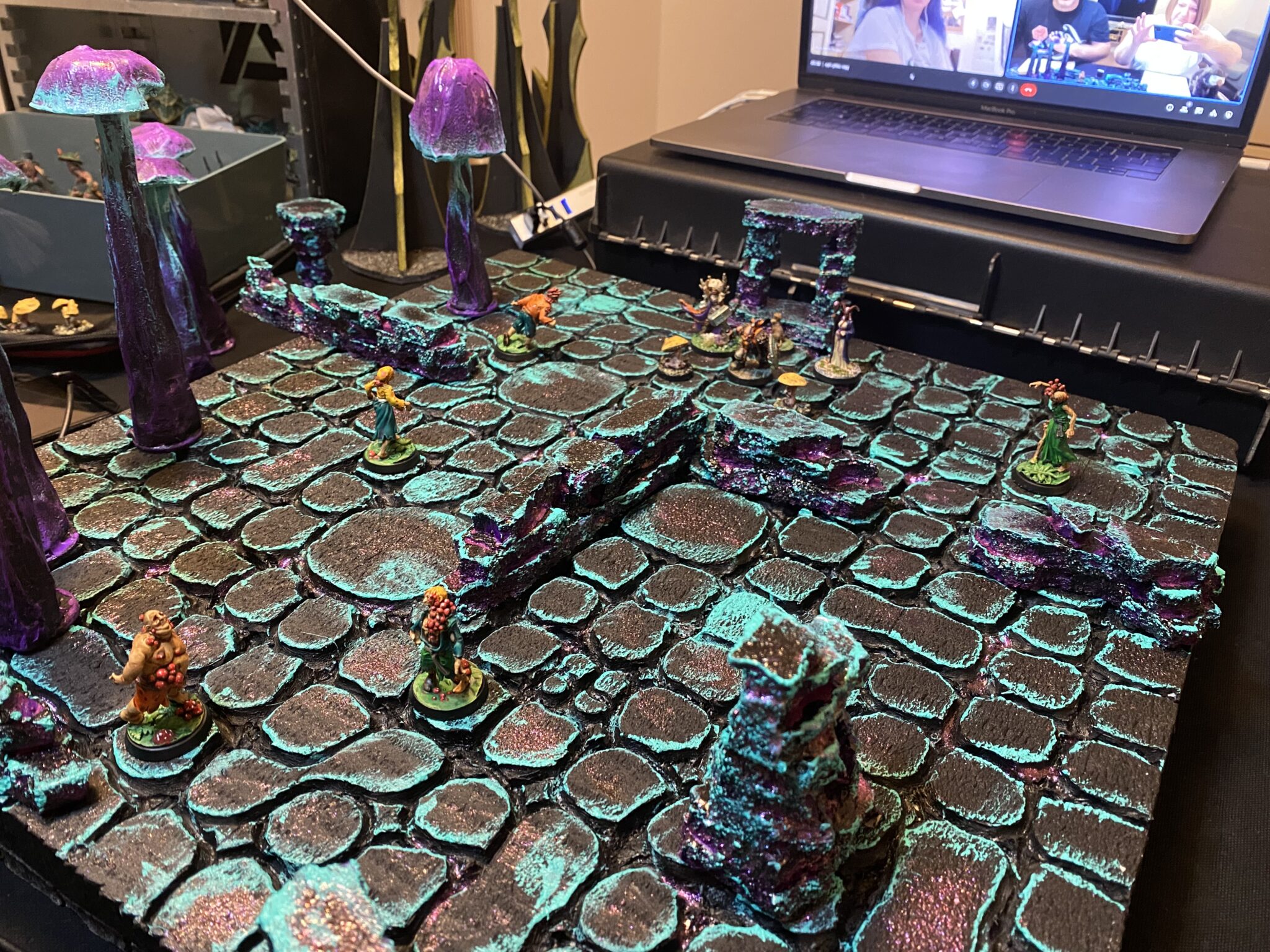 The mental blast from this Myconid Sprout reached far beyond the room. And a deep hum and some heavy steps beyond the room made the party decide to retreat, but only into the shadows of the tunnel as their curiosity kept them mesmerised at the odd and alien mushroom beings of the cave.

And they weren’t disappointed as a huge mushroom giant stepped into the room. Quickly and quietly the the party retreated back and decided to follow the carved hallway up instead. 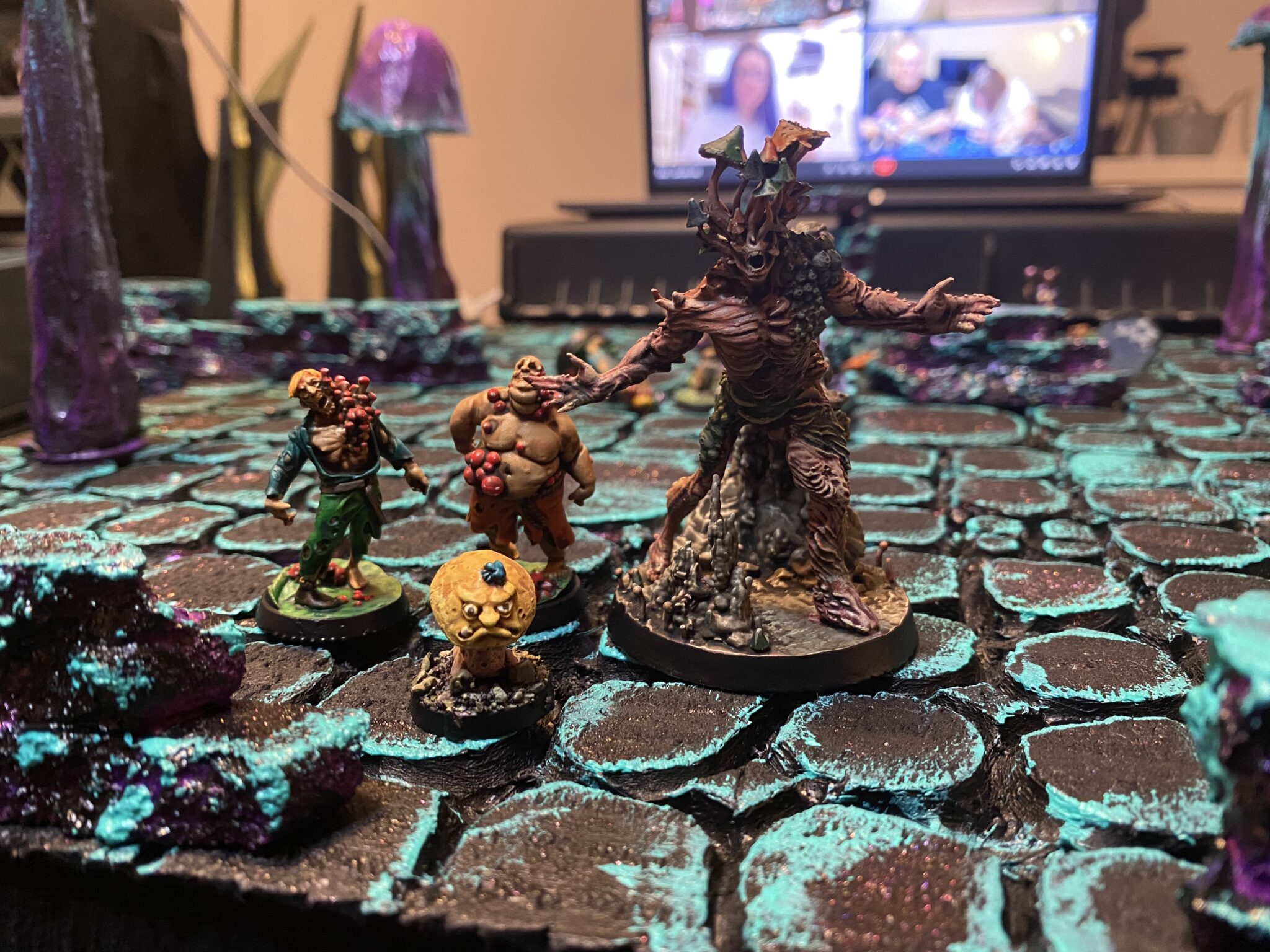 DM note, the idea of dropping the party in the middle of an entire army was an idea I had when I tried to figure out how to set up encounters where combat really really was not a great idea and the players did a fantastic job at navigating around a massive camp of battle-hardened Drow warriors.

Following the hallway up, the structure became less and less naturally formed and more and more ornamented and the quality of the craftsmanship was not lost on Thorgga… eventhough it did smell a bit elfish. 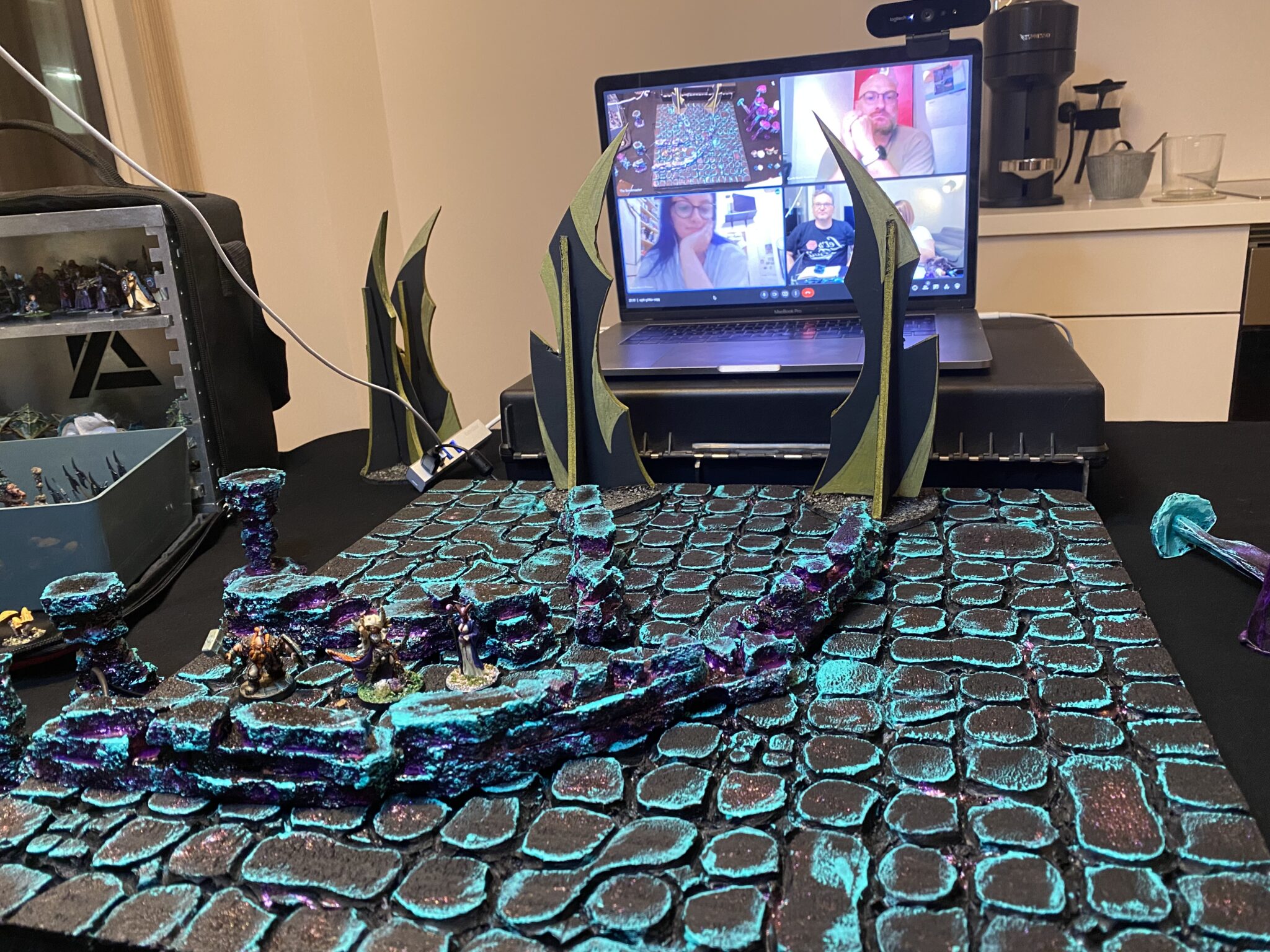 The hallway lead up to a huge artificially created hall, magnificently shaped by magic and hard labour.

Seipora magically changed to look like a Dark Elf guard and with Thorgga and Kaari as would-be spies from the surface, they were able to walk around freely.

However, as they tried to blag their way into the officers’ quarters, they failed and were turned away but not before seeing a strange looking dwarf bow to the General and leave via a magical portal leading to somewhere that looked like inside a mountain with lava flowing. 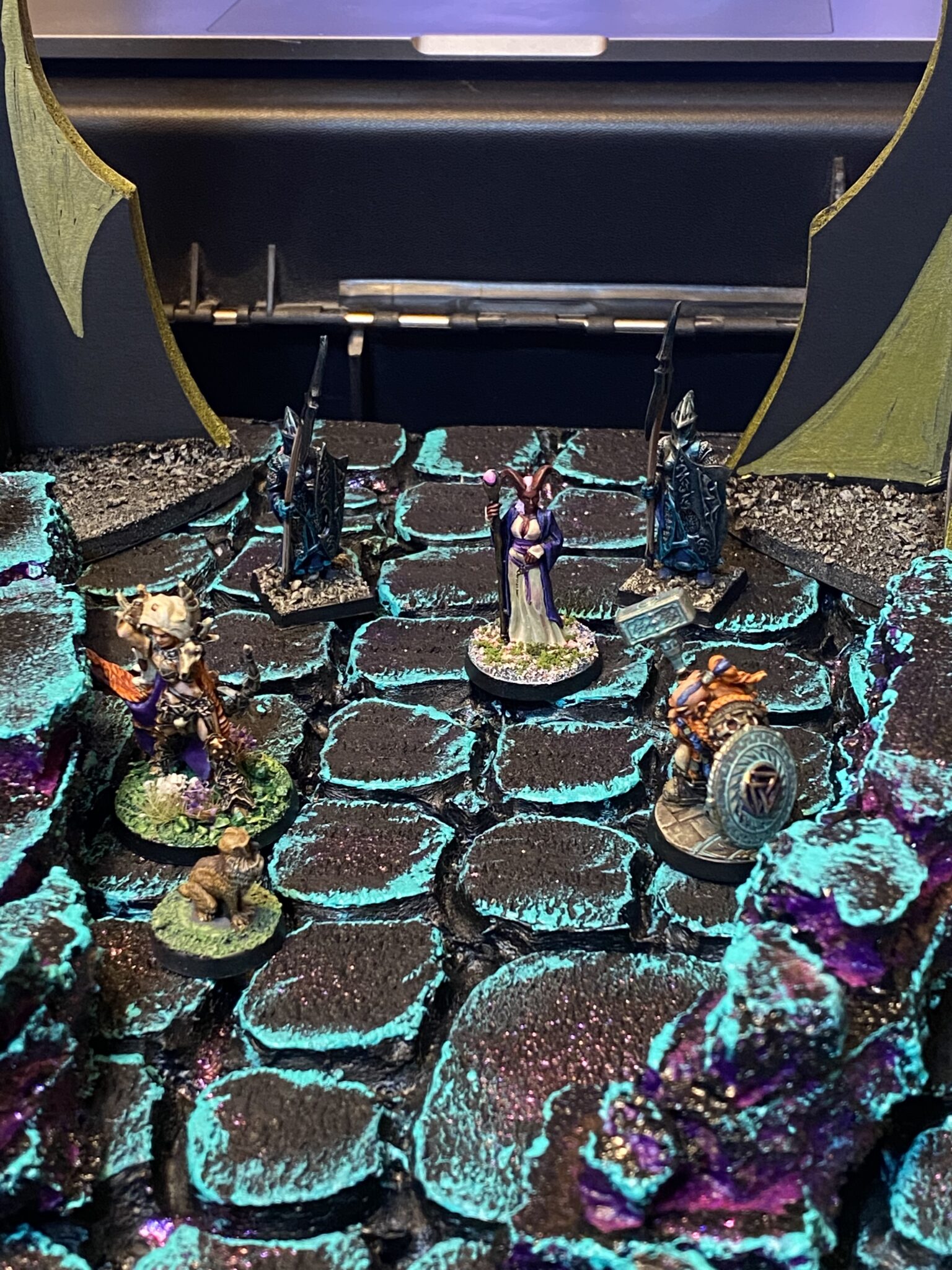 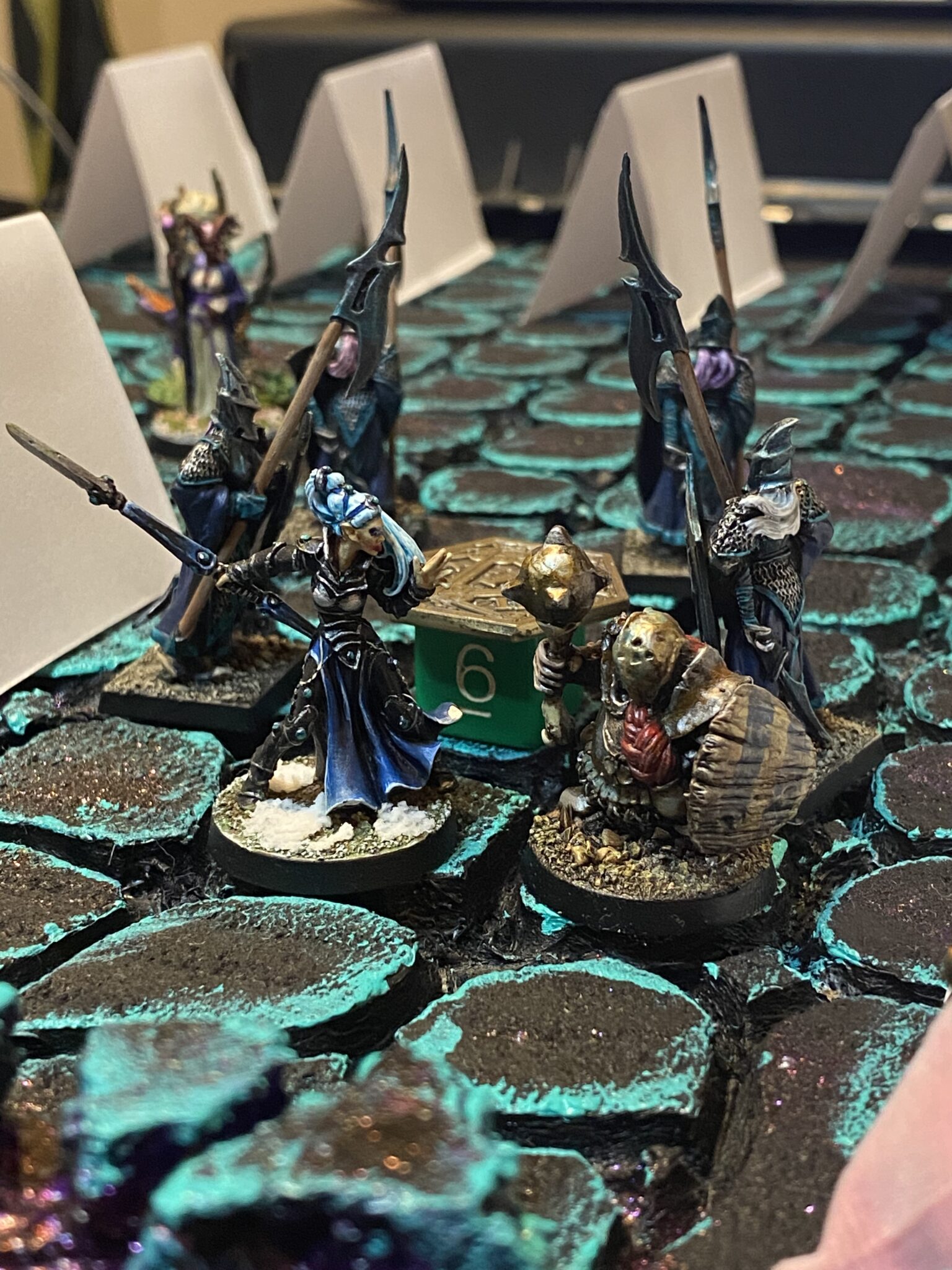 As the Drow army went to bed, the party decided to sneak up alongside the eastern wall. Here they found a cage of goblins. 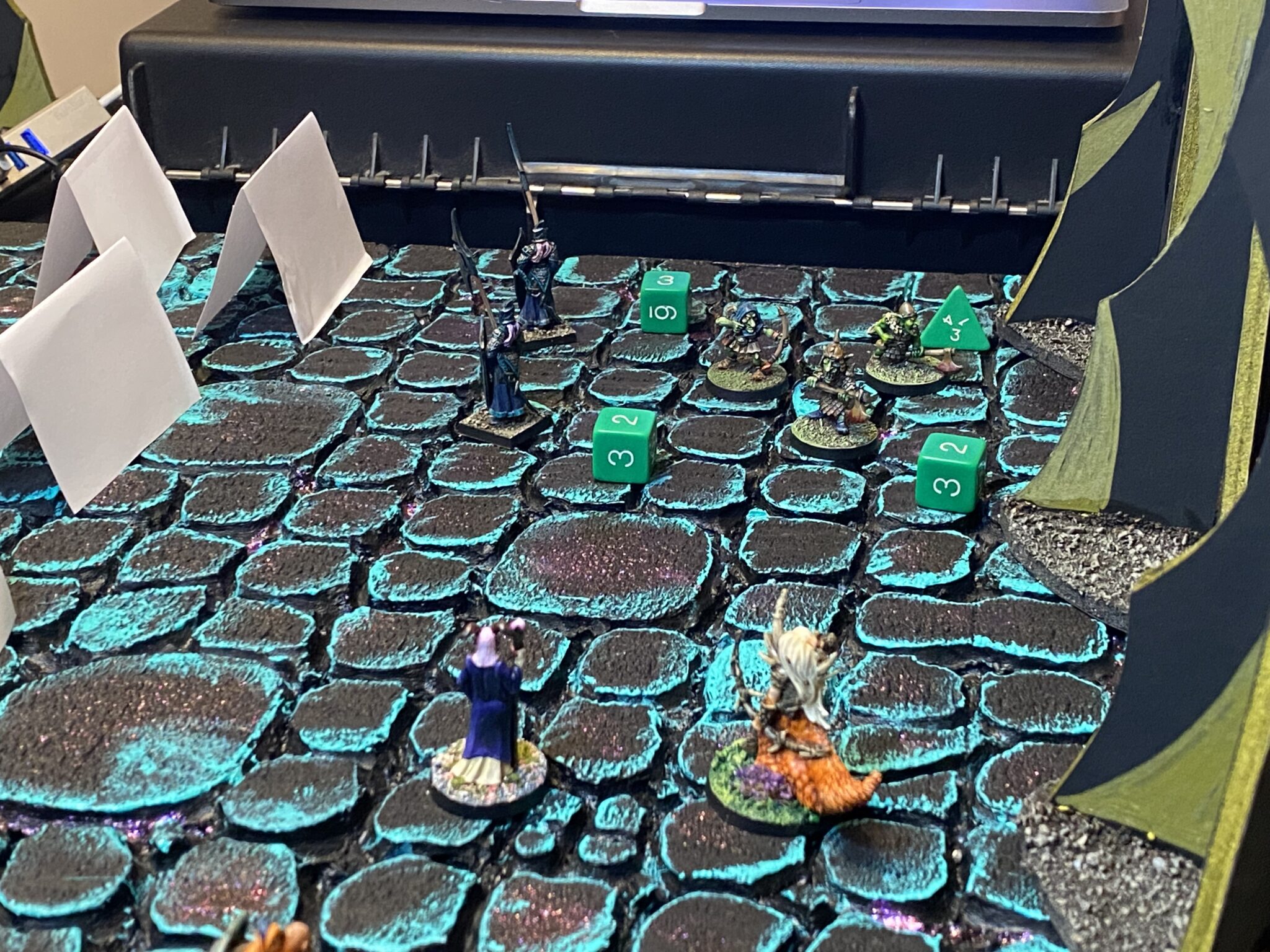 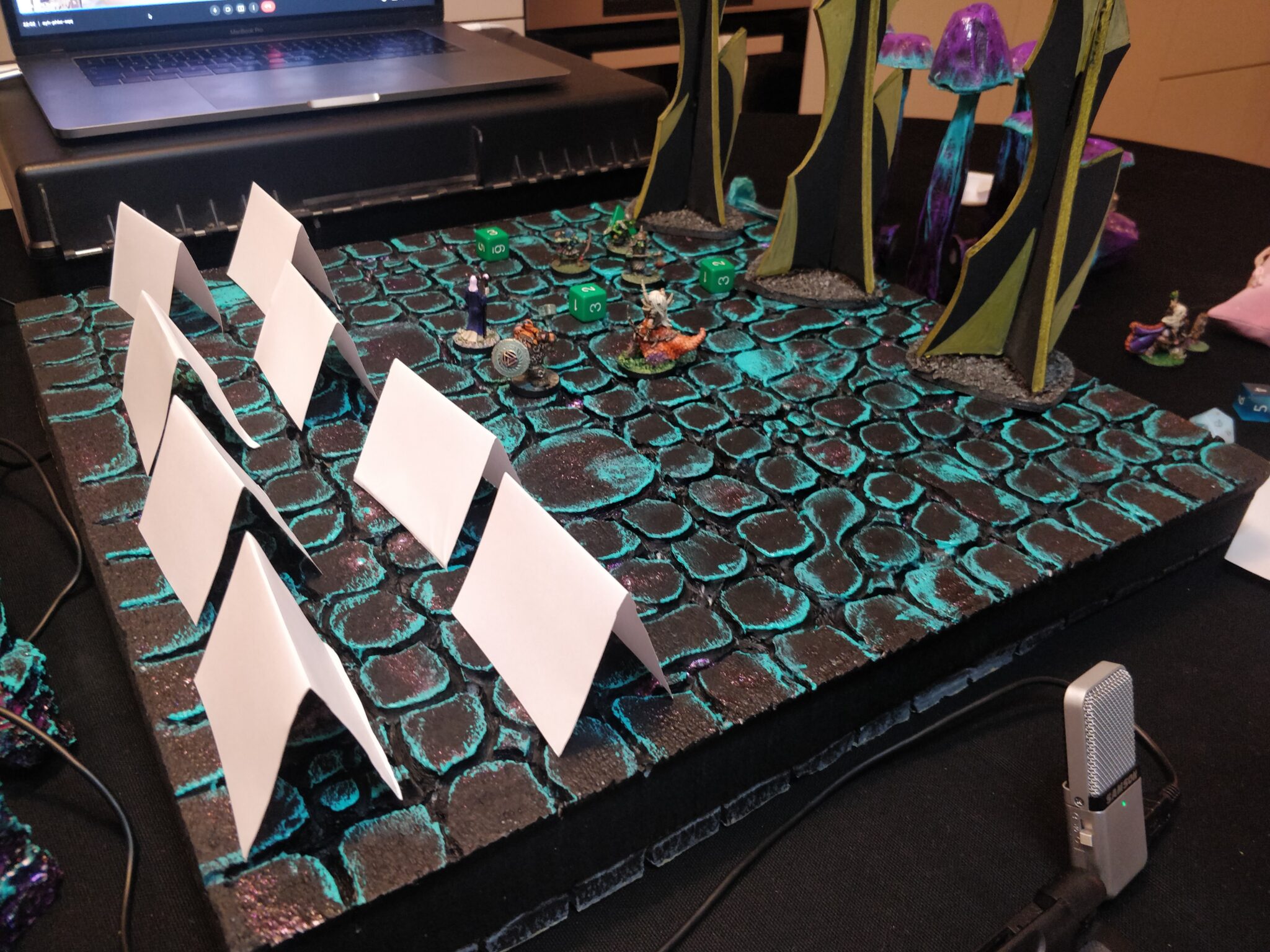 Yes, tents made of paper.

They quickly convinced the guards that they were their replacement and released the goblins only to find three of the stupidest goblins, who they quickly tricked into showing where they had hidden some valuable weapons they had stolen from the Drow officers.

As Seipora’s magical disguise disappeared, the party realised they could see the exit.

“The surface world is finally near!” they thought with relief. 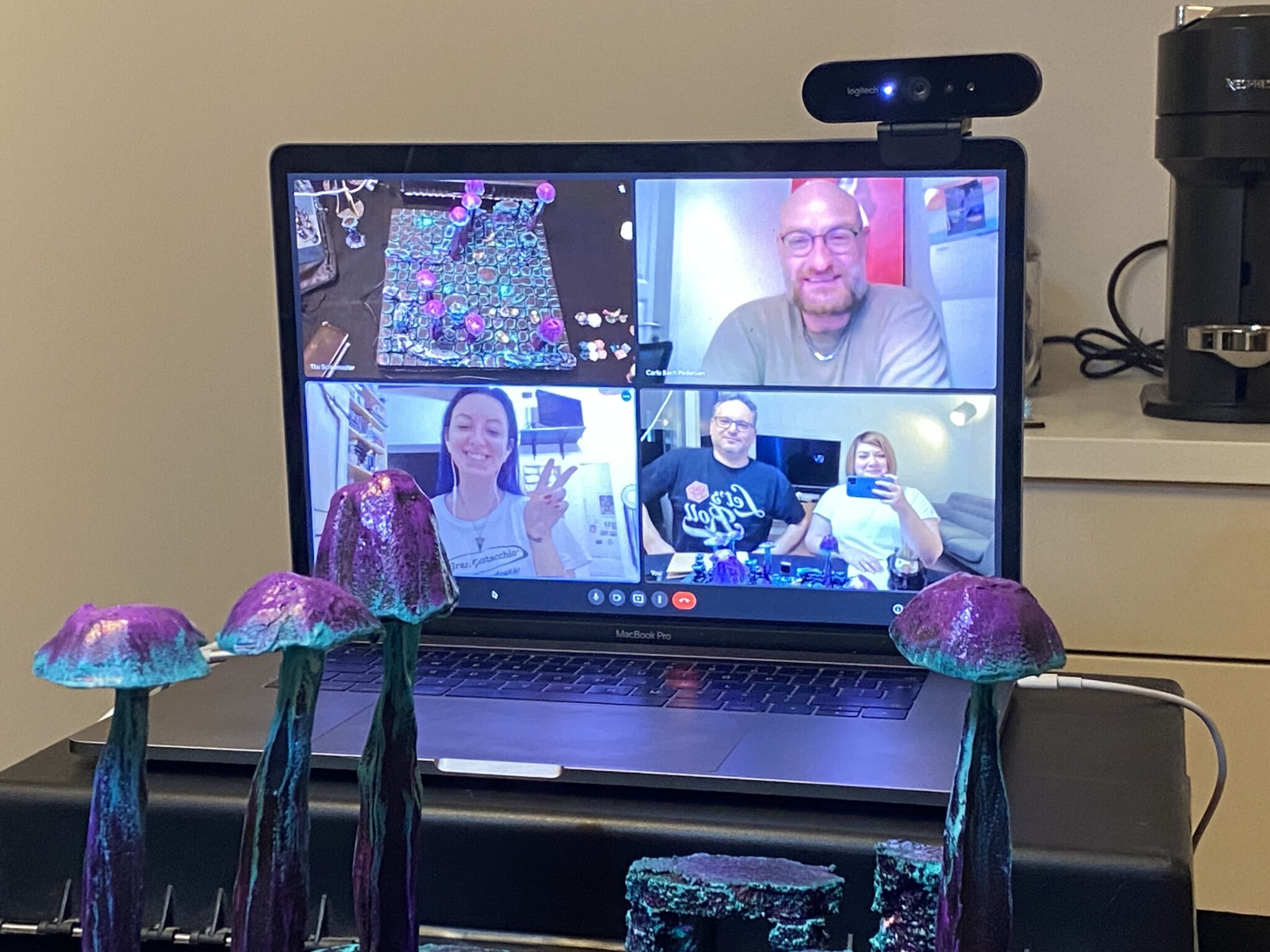