Having rested up, the heroes had a simple choice: Take the tunnel down in the direction of the fleeing Templar Luminis, or take the tunnel up.

After some light (Umberhulk) breakfast and a quick discussion, the heroes chose to go up! 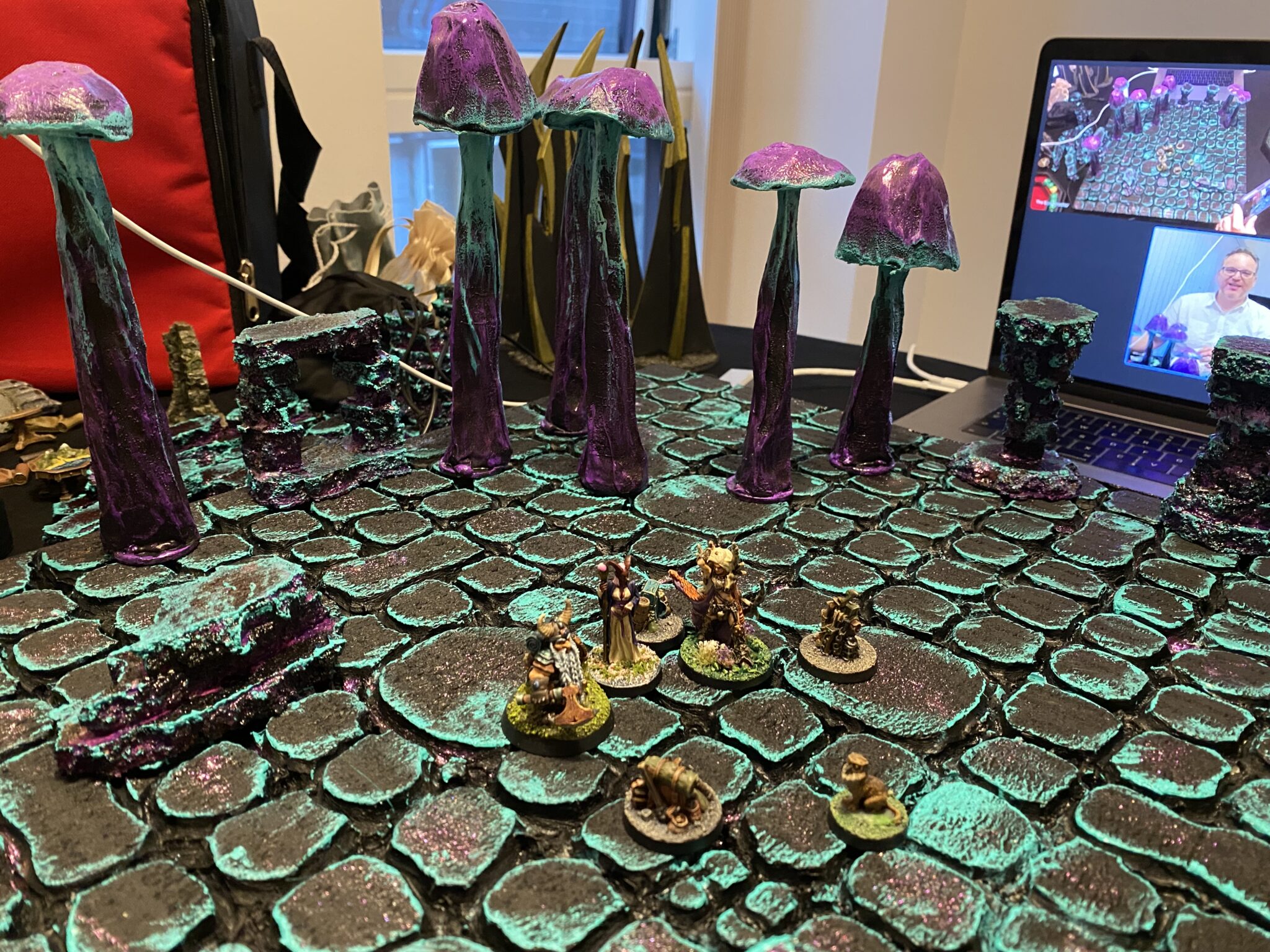 DM note, I don’t believe in rearranging encounters so they always show up in the path of the players no matter what the choose, so choices like this leaves some encounters never to see the light of day.

After walking for some time up and up through the naturally occurred tunnel, the path started going down again towards what looked like a larger area lit up by the mighty fluorescent mushrooms.

In the opening the path turned to the left but there was a crumbled cave-in to the right. Seipora quickly determined that this had been a natural collapse that probably happened centuries ago.

As the party decided to continue, Thorgga went over the the rubbles out of bored curiosity, but as he kicked some stones around, he spotted something hand made: A piece of carved stone.

The party started moving rubbles and found signs of ancient architecture and even a buried staircase, but with the focus on the rubbles, they didn’t hear the Dark Elf sentinel squad until crossbow arrows were flying around their ears. 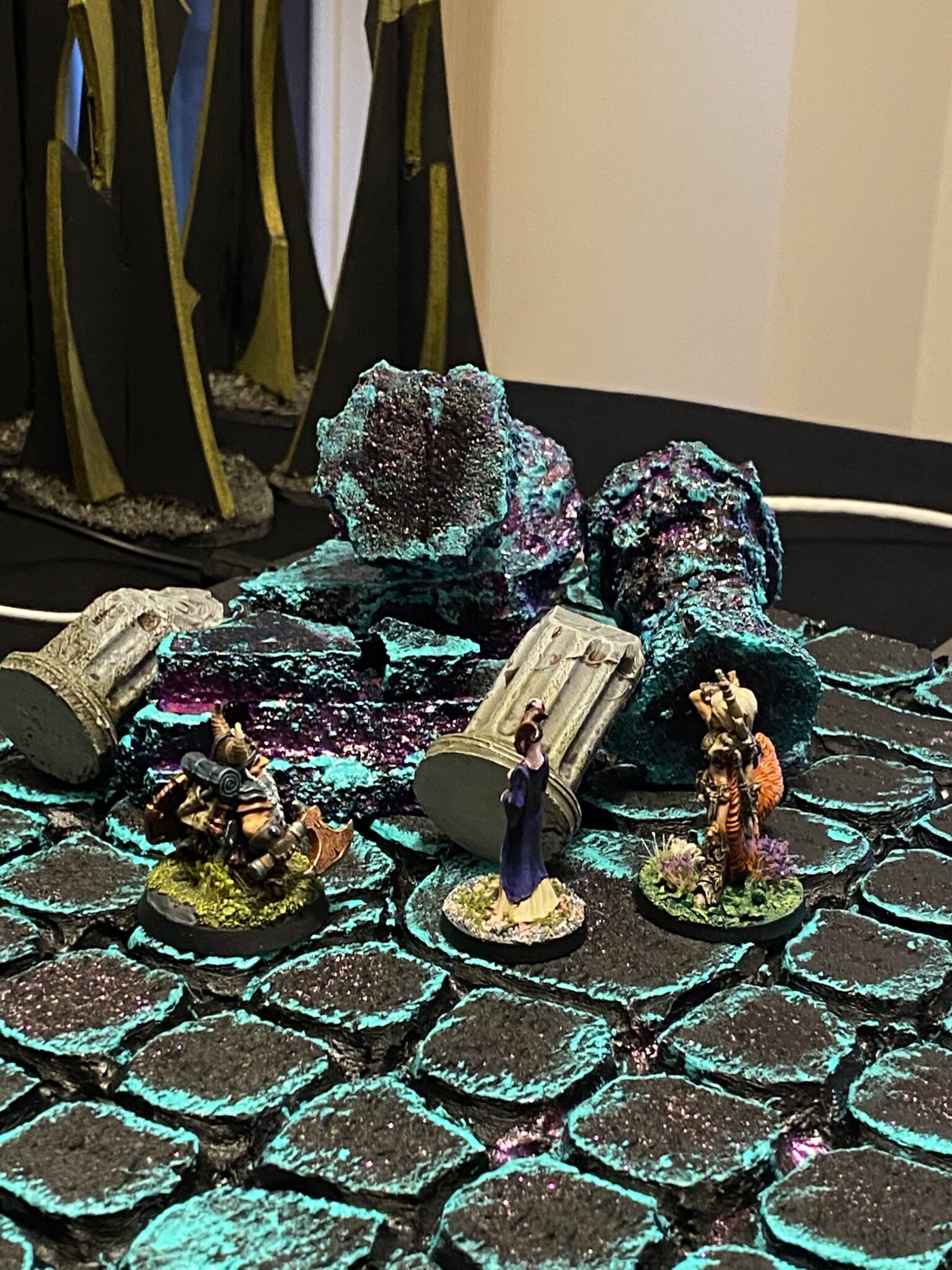 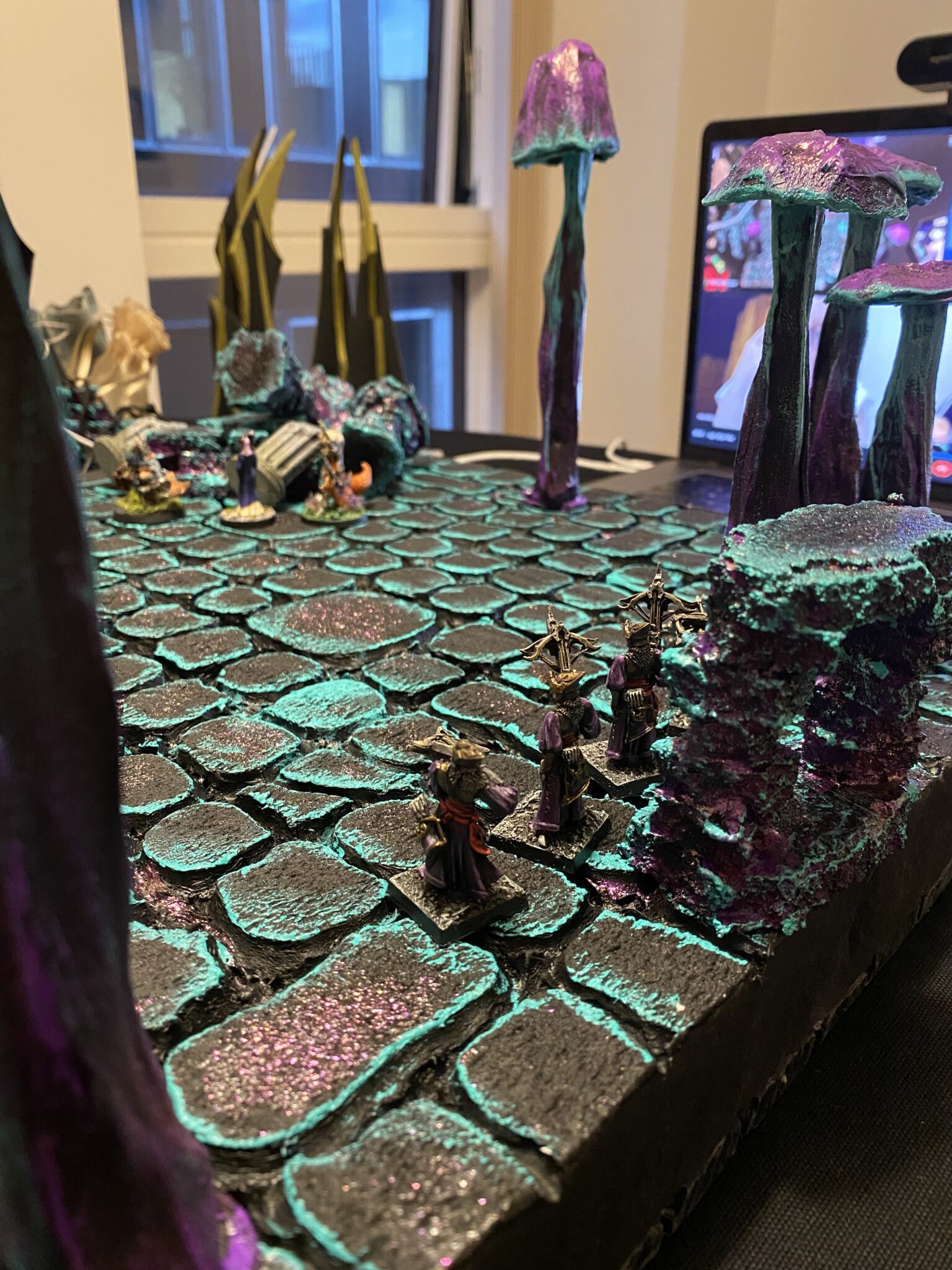 But the Drow were no match for the experienced heroes. “Keep one alive” shouted Kaari the Ranger to Thorgga the Dwarven Paladin standing in the middle of the Drow.

Too late the last standing Dark Elf made a run for it to the door, but was brutally killed by Thorgga to the disapproval of Kaari: None of the Drow were left alive. 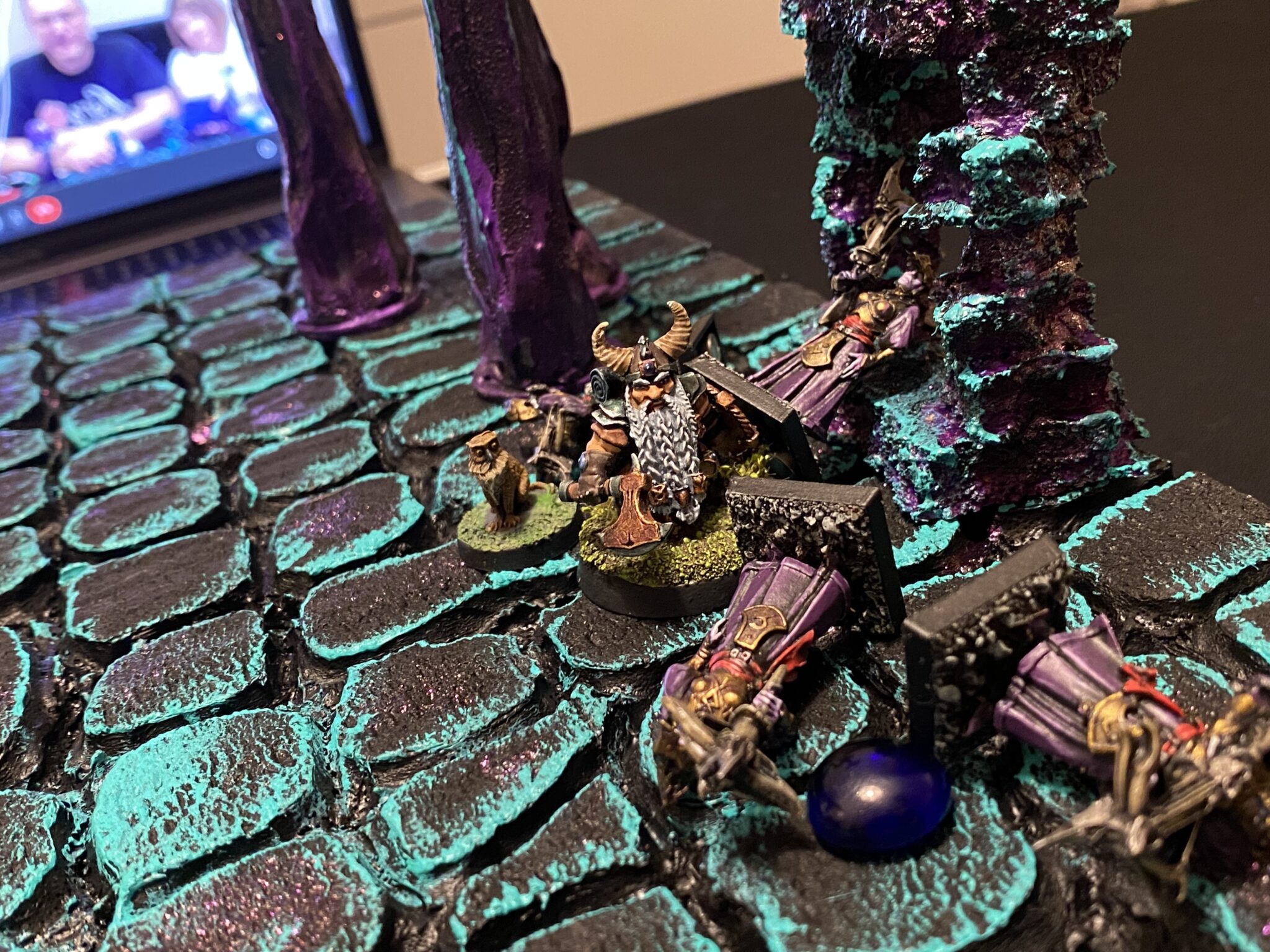 The party returned to clear the rubble to find a well preserved ancient staircase leading up. Up all the way to a beautiful old door.

Seipora grabbed the handle and with a push opened the door into a massive ancient burial chamber that was lit up by torches magically or technically being lit around the room one by one.

In the centre was a sarcophagus with 4 stumps of what might once have been stone pillars. 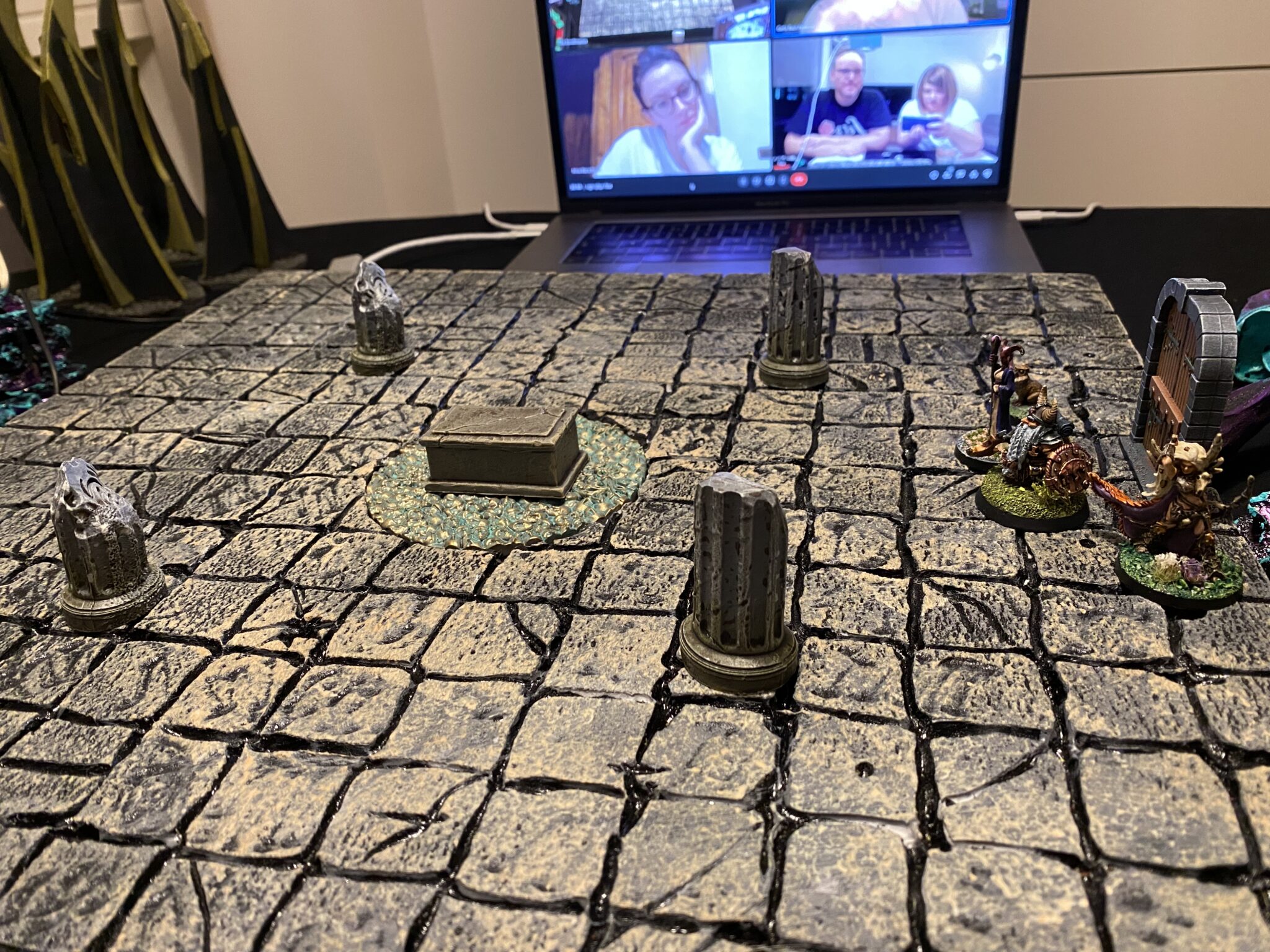 but without the rest of the pillars, the party found the pillars an oddity and a quick look revealed three levers on three out of the four pillars. 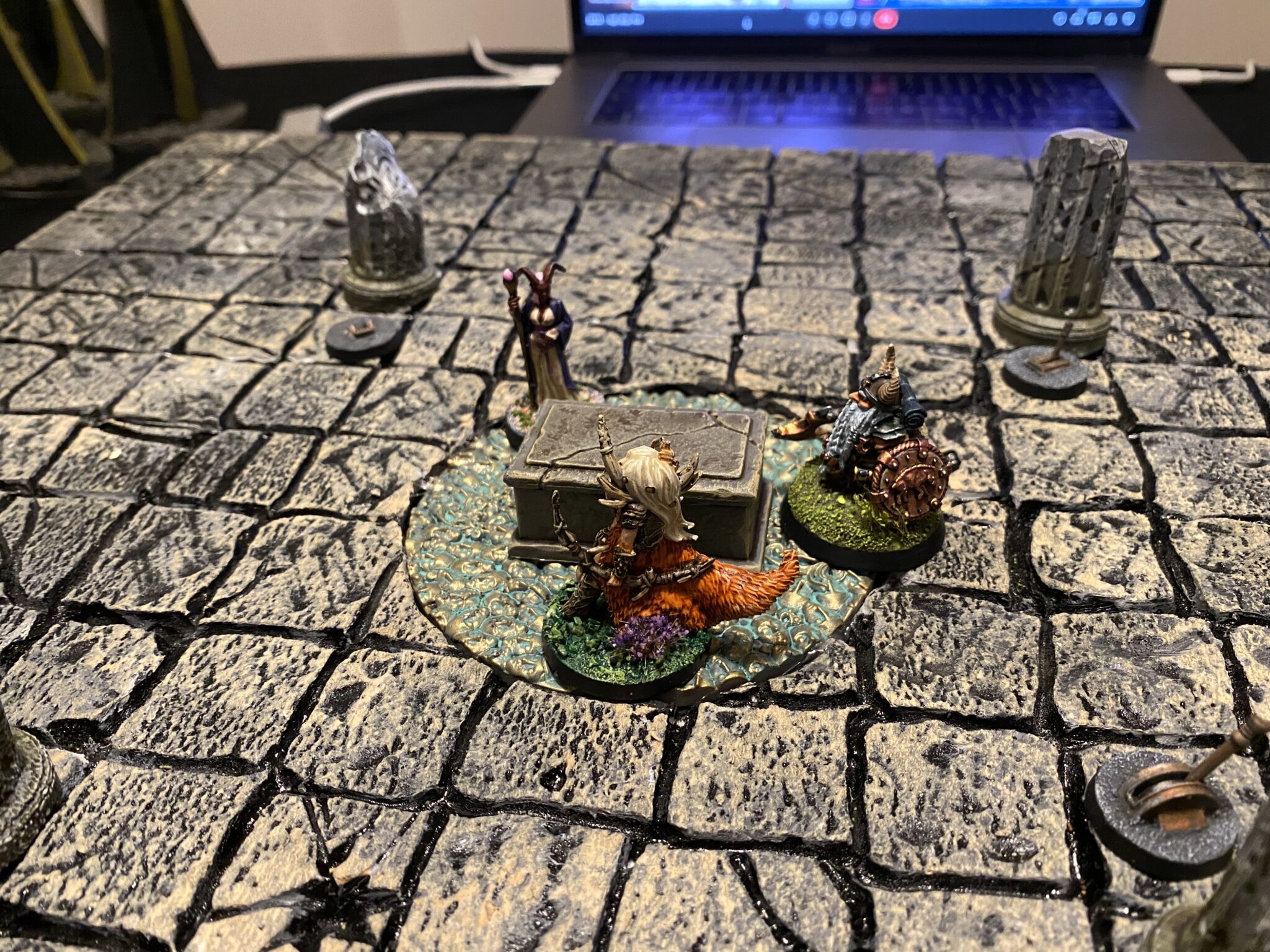 However, the party decided to leave the levers alone and instead push the lid of the sarcophagus, but as soon as they started pushing, the wall on the far end came crumbling down and floods of water came pouring out flooding the room quickly.

And to make matters worse, a Giant Skeleton of a Cyclops, came out with the water. 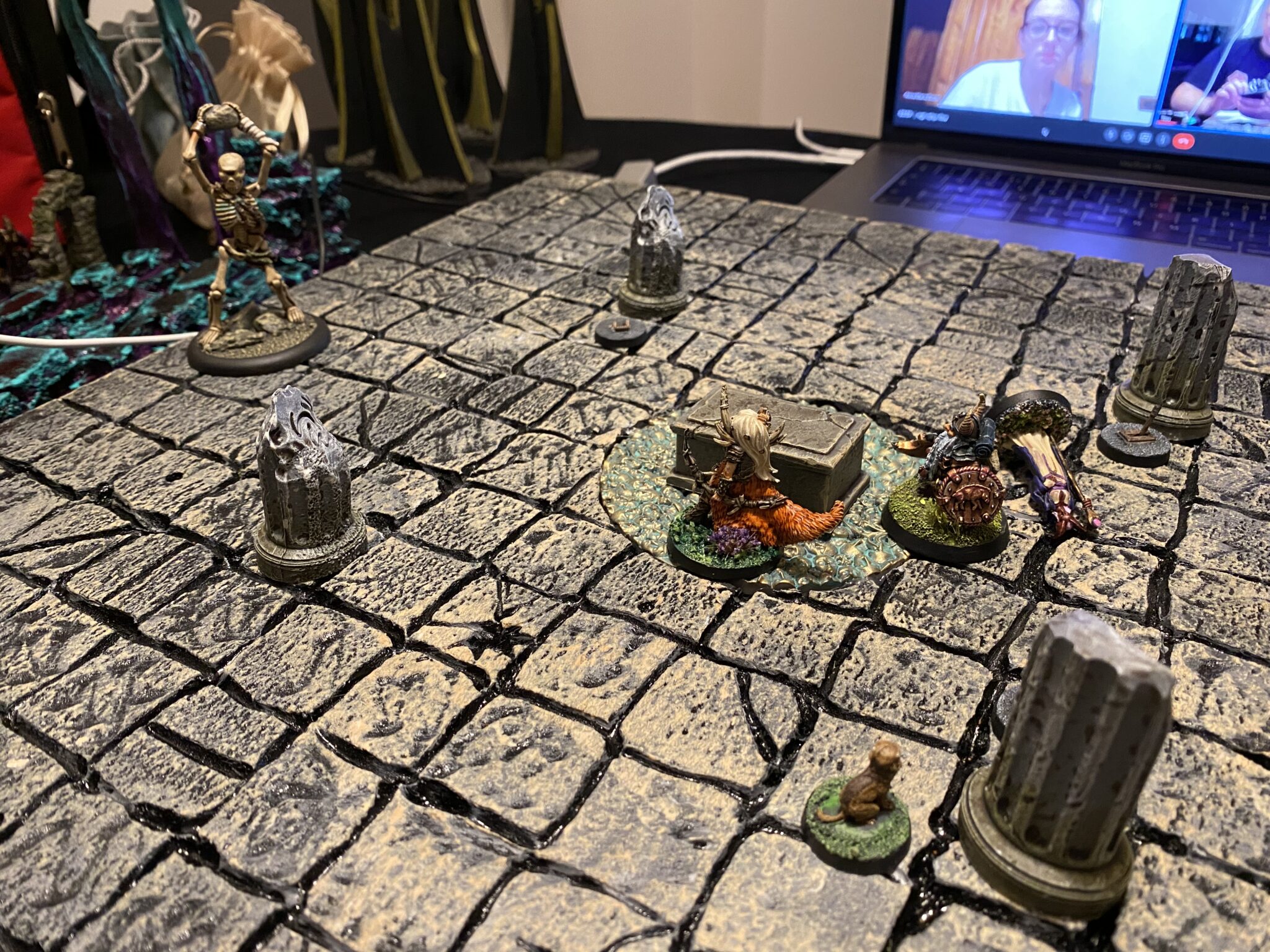 Kaari very quickly cast Hunter’s Mark on the Giant Skeleton and shot it dealing substantial damage to which the Cylops tried to retaliate with a Frozen Glare, but with no effect… other than making the gem-craving Ranger think it had a gem in its eye socket!

Water kept pouring in, so Thorgga tried to pull a lever but it was too heavy.

Seipora in a quick intuitive act, cast Ray of Frost to freeze part of the water and she hit one valve slowing down the water a bit.

While Kaari kept the Cyclops entertained, Thorgga, Seipora and Polly the baby Owlbear, pulled the first lever slowing the water even more, but it was reaching the neck of the Dwarf by now.

Seipora did her signature move and jumped up on the Skeleton to hit it from above but with the unstable movement missed. 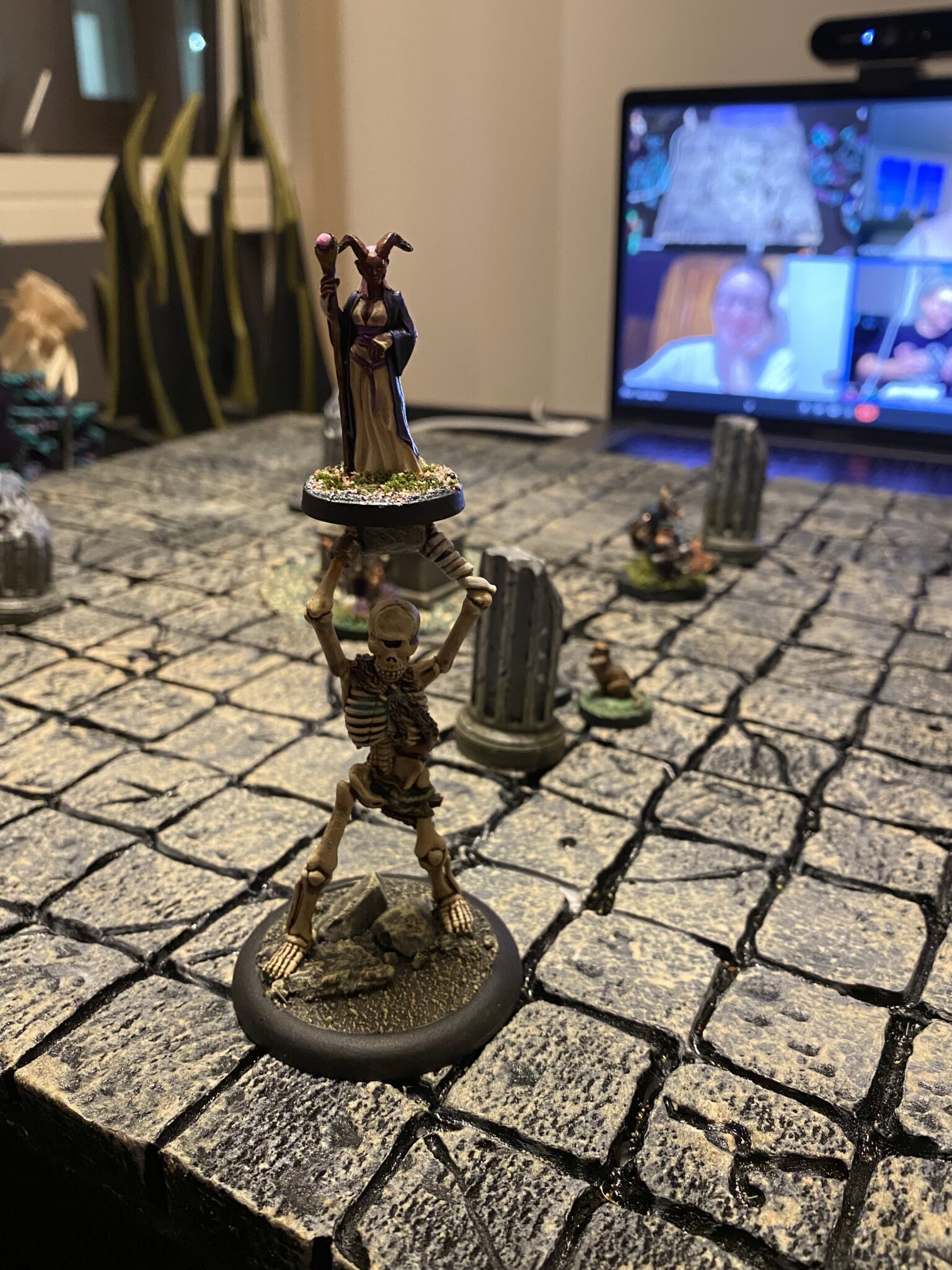 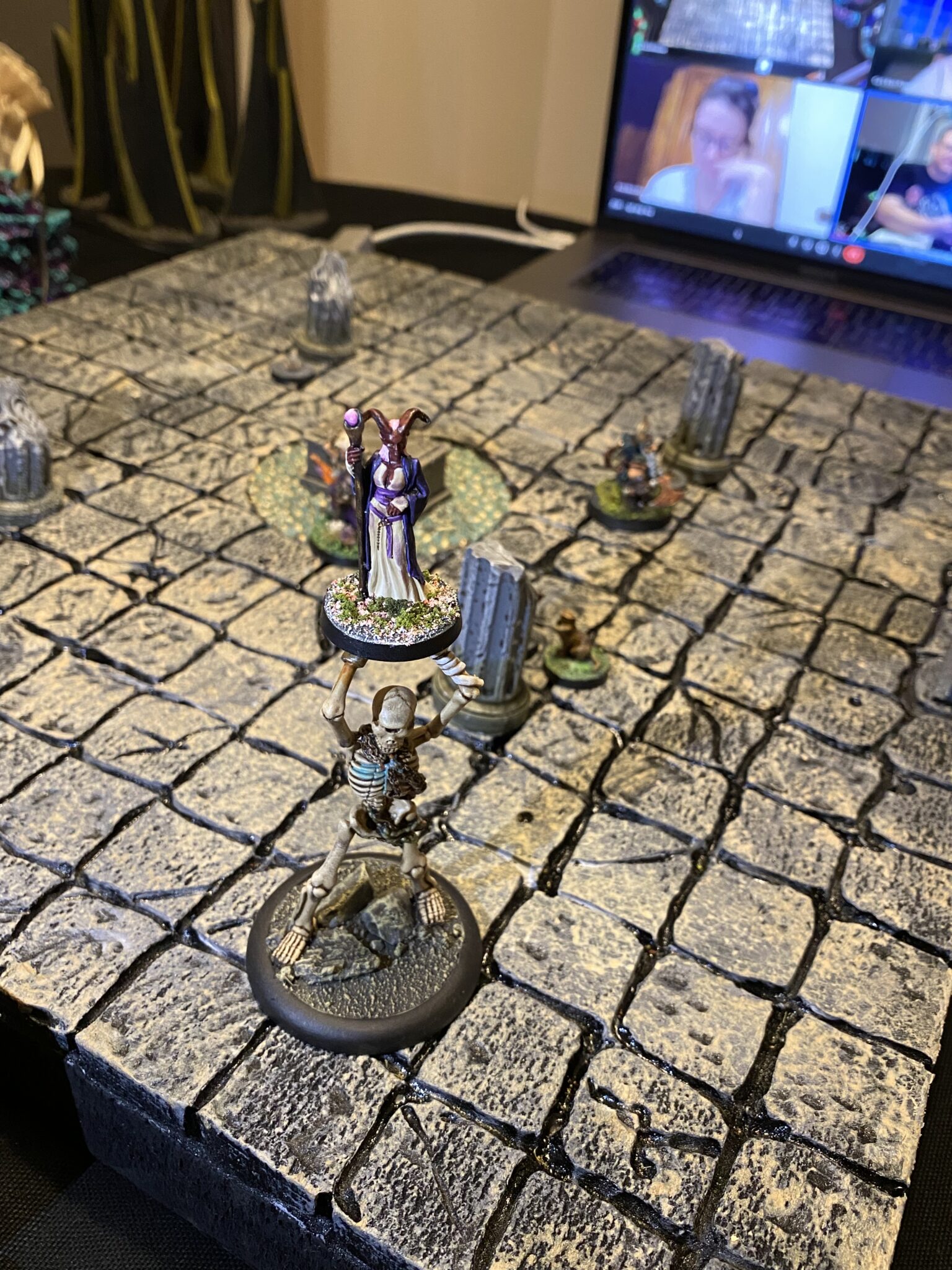 Kaari on the other hand, used the distraction to shoot the Skeleton right in the empty eye socket, destroying the undead guardian.

And finally the party managed to close the water and the water was now flowing away.

While the Cyclops didn’t have a gem in its eye socket, the corpse in the sarcophagus held a red gem and an emerald gem in its skeletal hands.

Thorgga picked those up and had a hunch they might be magical, but the party decided to figure them out later once they were out in the open again.

Hey, how you doin’

Returning to the caves, the heroes followed the path where the Drow guards had come from and found a group of Dark Elf Guards chatting around a table.

Kaari, dressed in the uniform of one of the previously killed Drow, walked up to the guards and said: “what’s new?” 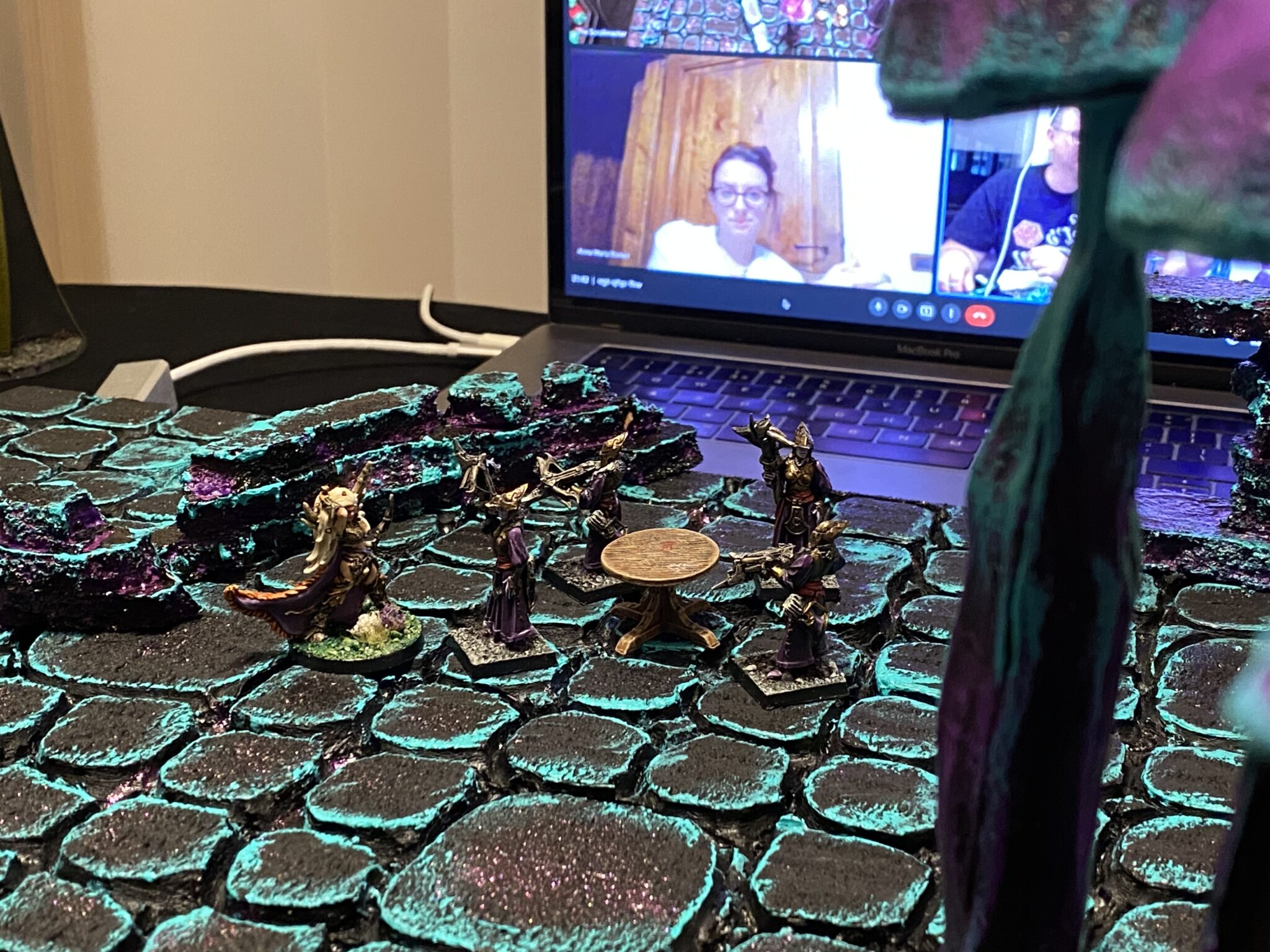 DM notes, what followed was a skills challenge of persuasion and deception rolls, some with disadvantage, but all successful.

Kaari continued the awkward deception with Seipora and Thorgga unable to believe that the Drow didn’t realise the deception, but nevertheless a conversation followed in which Kaari learned that a  larger scale military operation was in the making, something that sounded too important to dismiss.

However, the deception was not meant to last and with the surprise on their side, the heroes where in a good position to win.

But the discipline of the Drow Soldiers kicked in. One Drow engulfed the party in magical darkness while the other ran for the exit for help.

However, Kaari, blinded by the darkness, listened to the footsteps, took aim and fired with disadvantage not only hitting the Dark Elf, but also killing him with a single shot.

Thorgga used his senses, logic and luck, to run out of the darkness straight into a Drow that he seriously injured.

As the Darkness lifted, Kaari stood face to face with the very same Dark Elf, lifted her bow and killed him to Thorgga’s disapproval: Once again no Drow were left alive to interrogate. 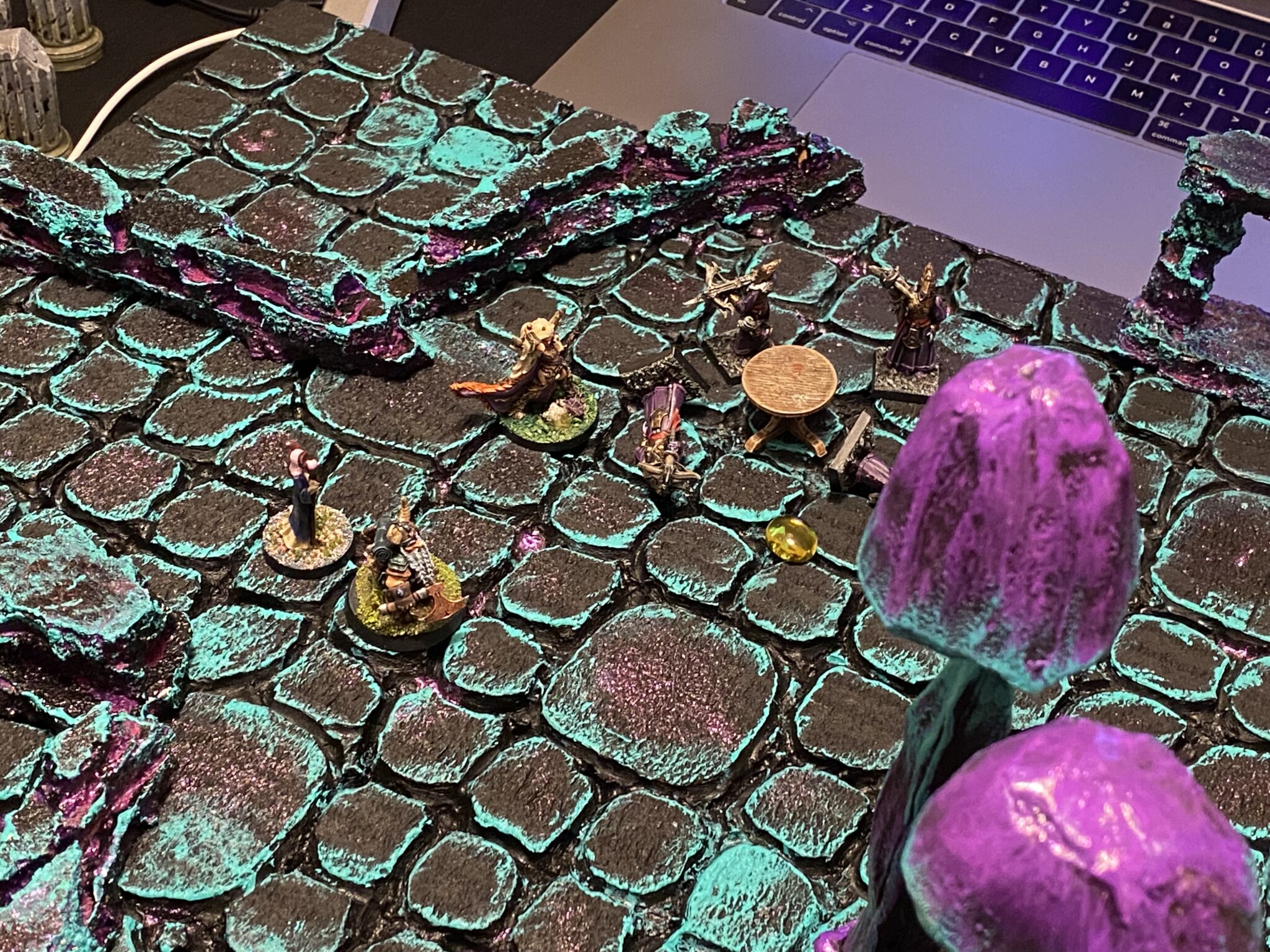 A humming message of help

While the battle was on, Seipora had stepped out of the magical darkness, but in the wrong direction standing right in front a group of small, yellow mushrooms.

Suddenly she felt a telepathic link, frightened asking for aid… unsure where it came from she looked around and back at the mushrooms.. and she saw one of them move towards her, but stopped by a chain around its stem. 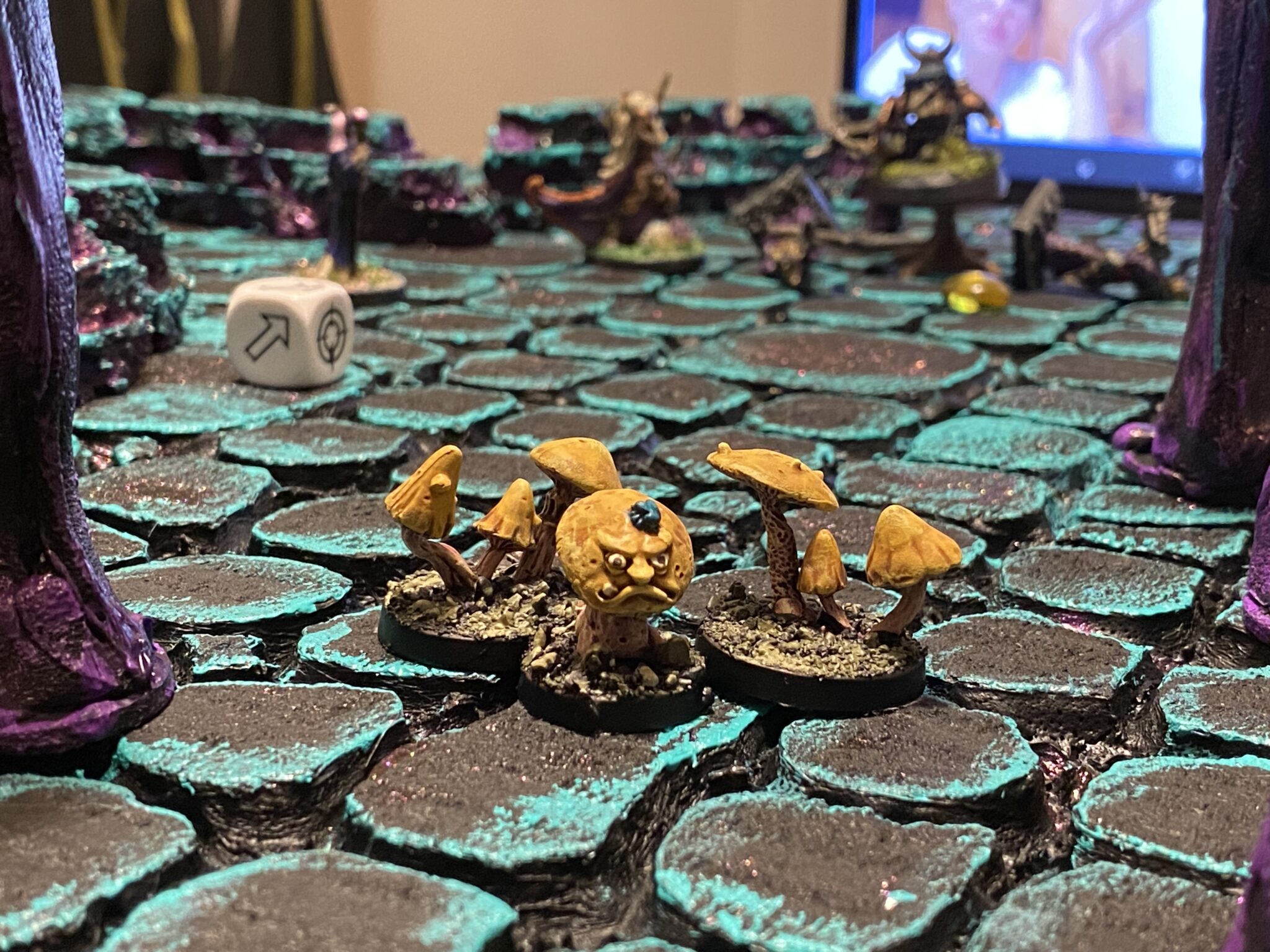 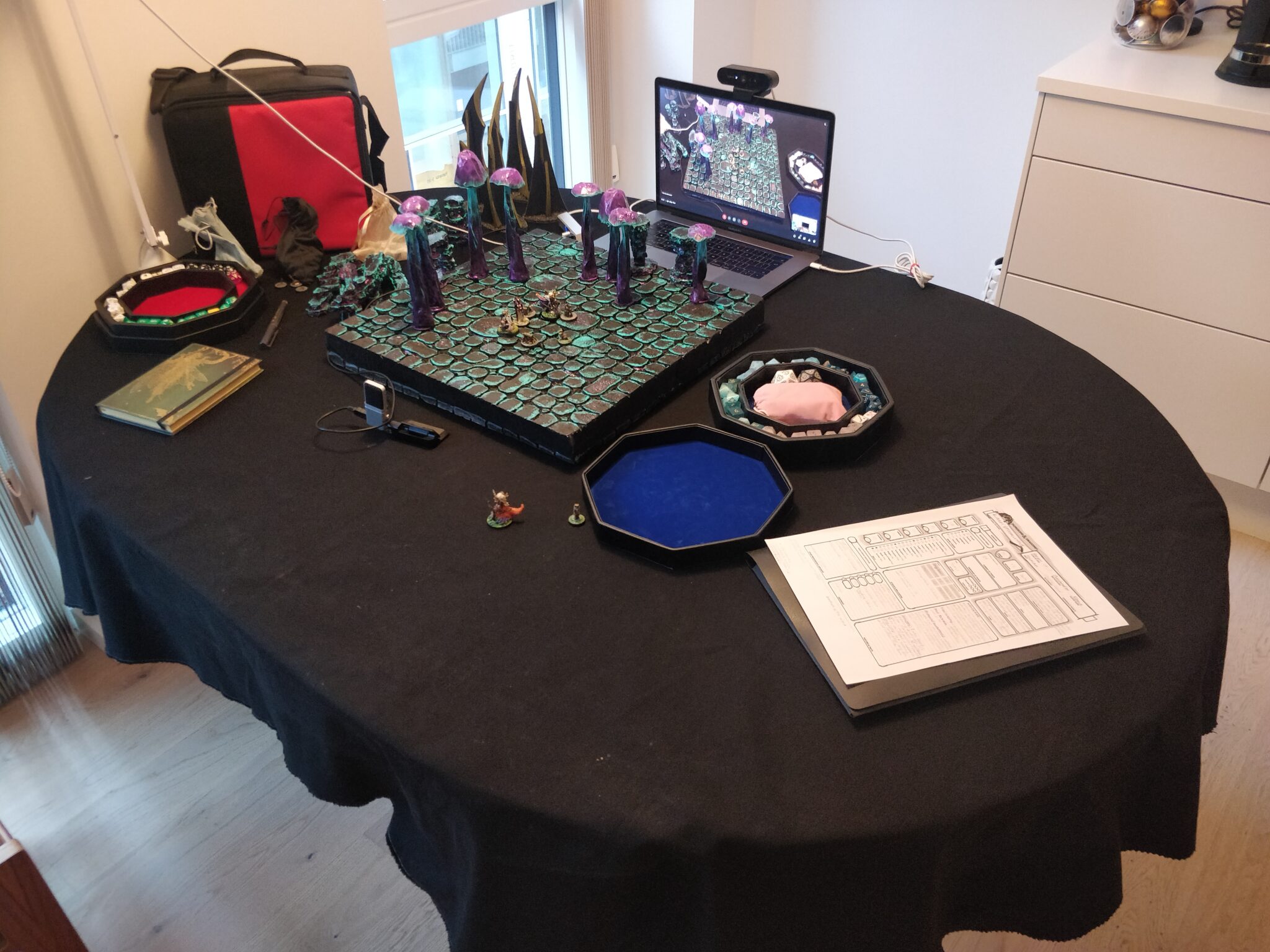