When last we met our Nightshift heroes, they had come in possession of the Black Sapphire, that on the surface was a disputed heirloom, but given the events unfolding, the heroes suspect it is much more than just an unusual gem stone.  The only clue they had was their dying patreon saying they need to take the gem stone to the Fairydopterist. What will they do? 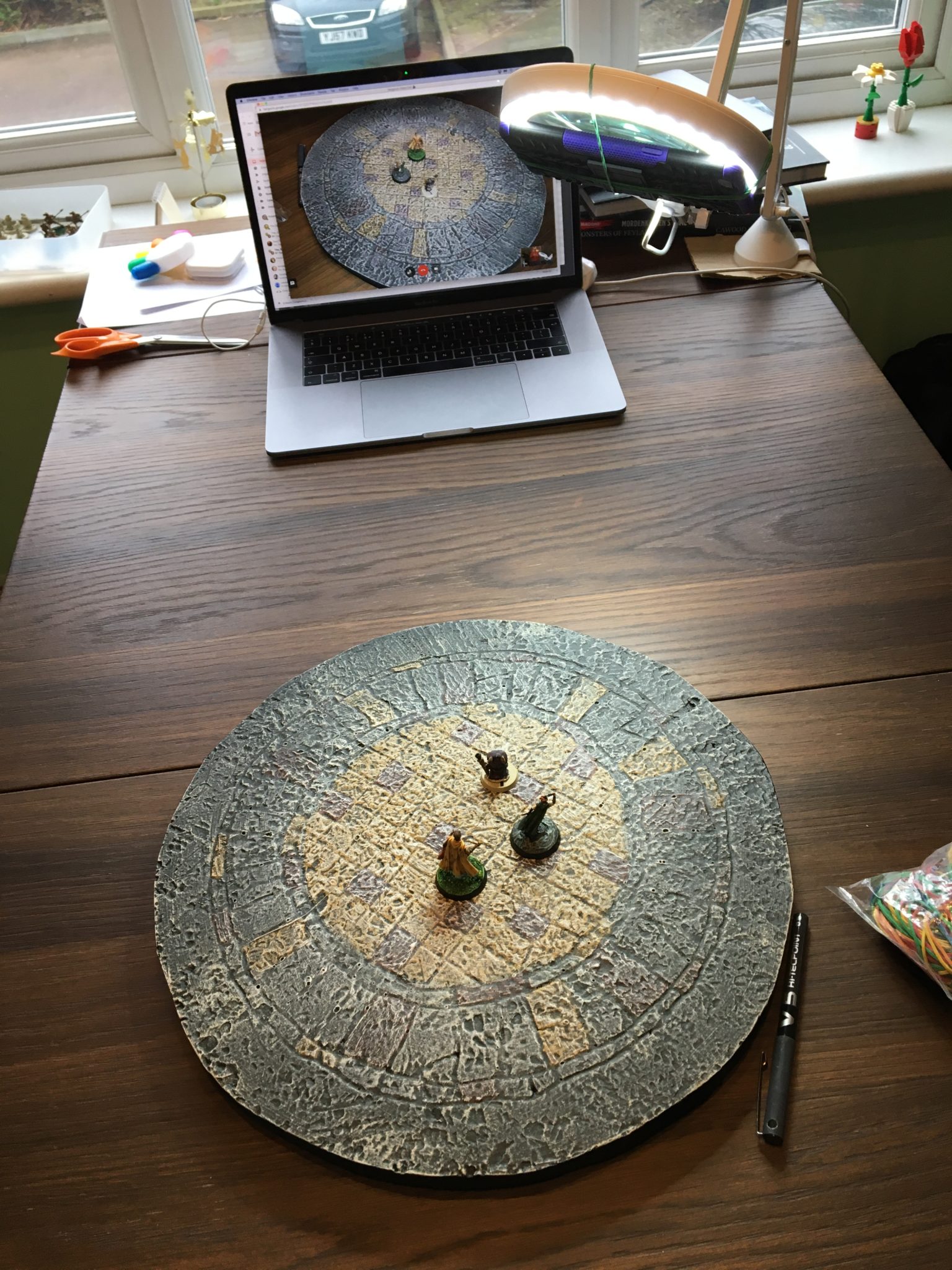 Given the Corona virus lock down, I ran this game as a remote game using Google Hangouts. I tied my phone to my hobby lamp so I had a camera on an arm I could move as needed.

Our games are normally quite scenery heavy and quite tangible in the details, so I had to slim down the complexity:

Things I learned from running the remote game.

How the game played out

The party first set out to find out what exactly a Fairydopterist is by going to the library. Here they spoke to Dwarven librarian Yurnik Greystone, who dug up a “Fairydopterist for dummies” type book and could tell the heroes that a Fairydopterist is somebody who collects fairies as other would collect butterflies.

The Warlock of our party, also spotted that one of the ingredients for preserving fey corpses was the Red Star Flower, a very rare flower in in these parts.

Gathering information from the seedy underworld of Daisygate, the party learned of Dr Wendell Cane, who would be able to provide the Red Star Flower. Indeed the good doctor was in the very same tavern, The Hags Head, where they acquired this information. 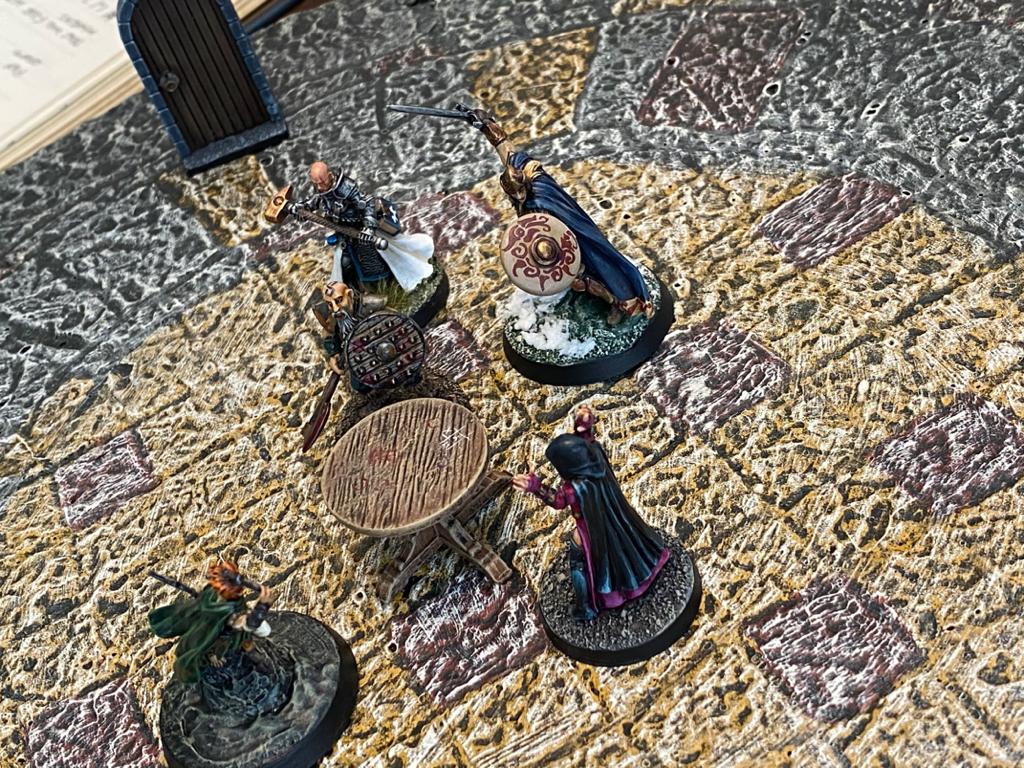 The party ceased the Dr and dragged him out of the tavern only to be confronted with two Ghouls under the doctor’s control.

The party attempted to get Dr Wendell onto a horsecart, but failed as the doctor and one of the Ghouls kept resisting the effort and it was only when a mysterious Satyr showed up to kill the Ghoul, the party got away.

In an abandoned warehouse by the harbour the party questioned Dr Wendell and learned how he had sold the Red Star Flower to a scholar named Tholgina Grimtooth and they also learned of a mysterious cult called The Twilight Wine who buys fairies for sinister purposes.

At that very moment a mob of thugs appeared, killed Dr Wendell and threatened the party to stop their line of enquiries and walk away from this topic all together.

The party jumped on their horsecart and fled.

A brief stop at the library taught the heroes that The Twilight Wine is an ancient cult who consumed fey creatures to obtain eternal life. The cult has seemingly been dormant for 200 years.

Finally the party found themselves at Tholgina’s house, where there was some confusion with a neighbour and local Daisy Guards.

However, that was soon set aside as a oddly mixed mob of citizens, children, a half-ogre and goblins appeared demanding, in one voice, that the party gave them the Black Sapphire. 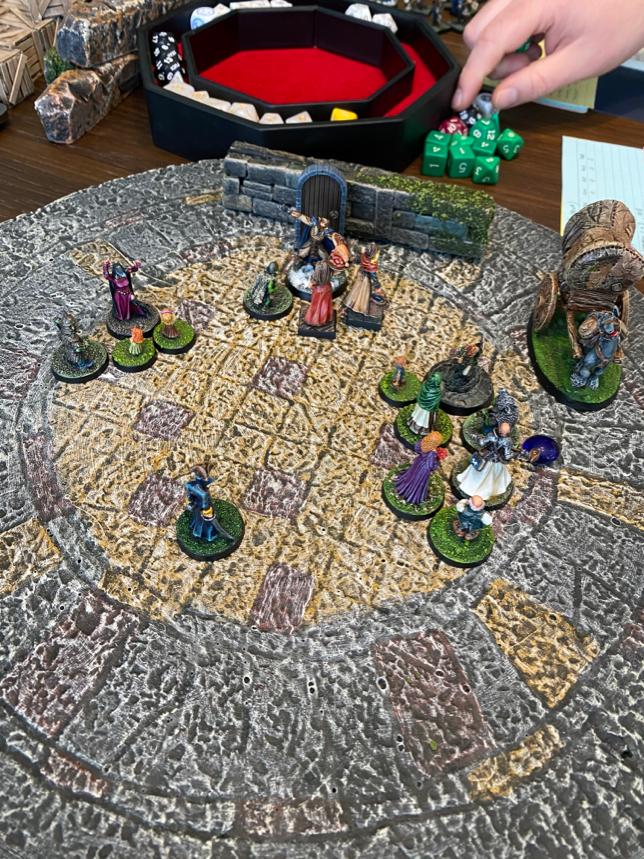 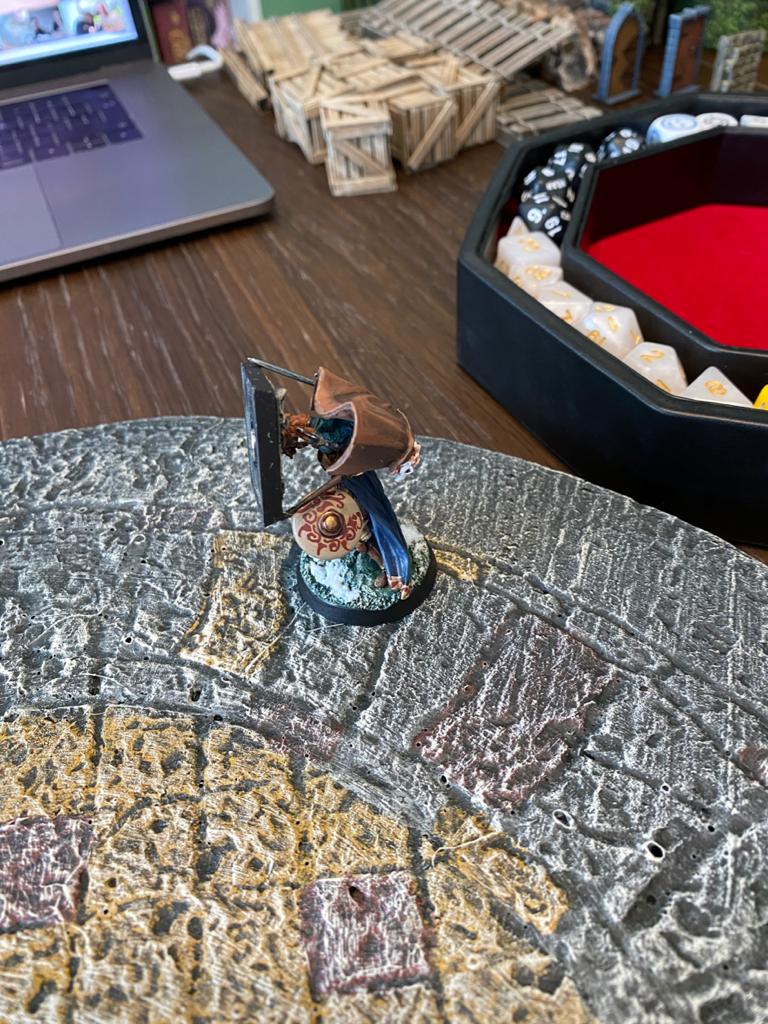 An obscure human figure, that seemed to be as much there as not there, was controlling the mob.

One of the Paladin’s attacked the figure only to see the figure’s skin transform from human pink to deep purple and its face change from human to a menacing looking, tentacle covered purple face.

The Rogue create a perfect distraction by pretending to put the Black Sapphire in a small bag and throw it over a nearby house. 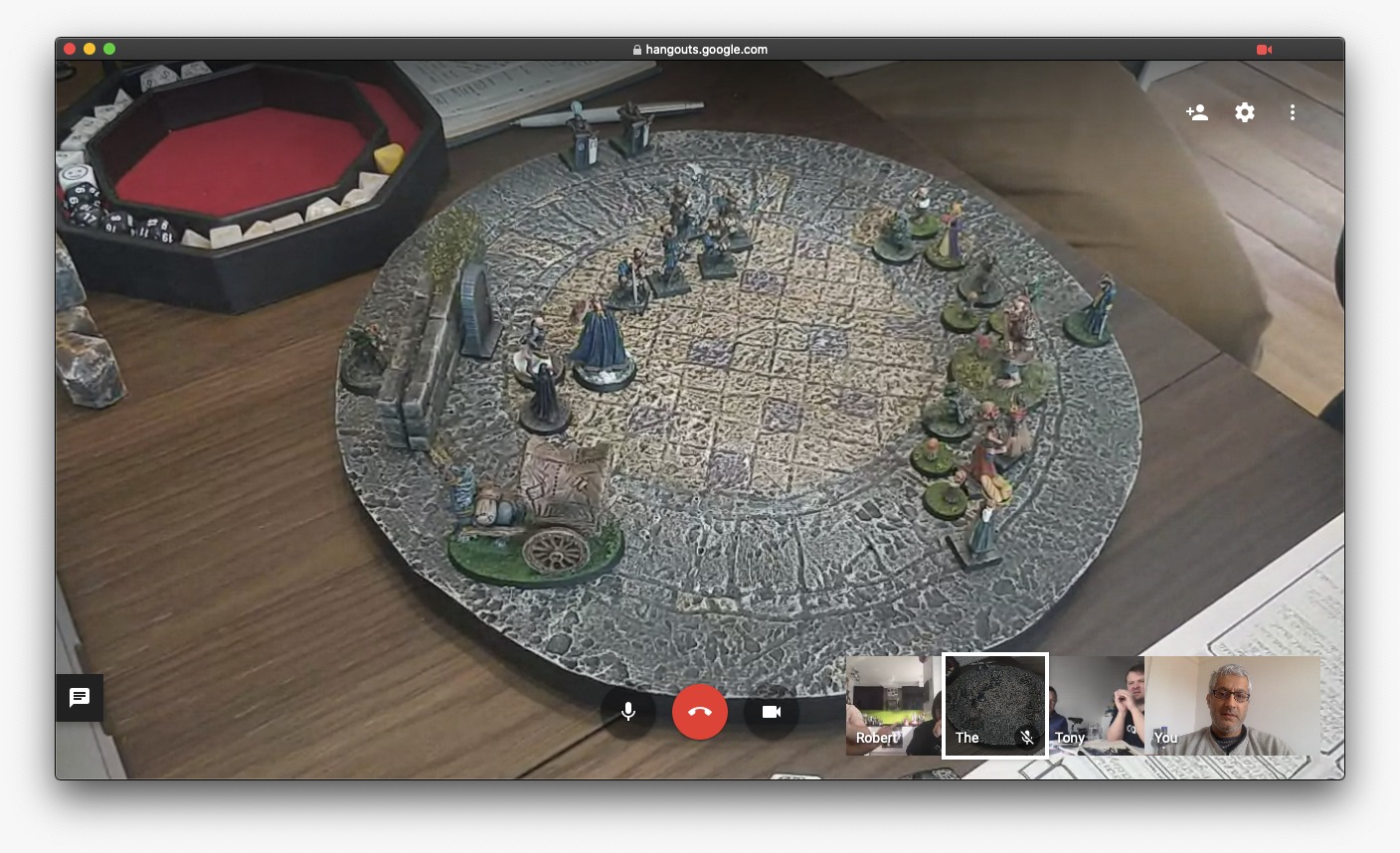 While the creature and its minions left to find the stone, the party chased the horse and cart away and hid in Tholgina’s house.

Once the coast was clear, they left in the cover of night, and hid in the abandoned warehouse.

What will they do next? 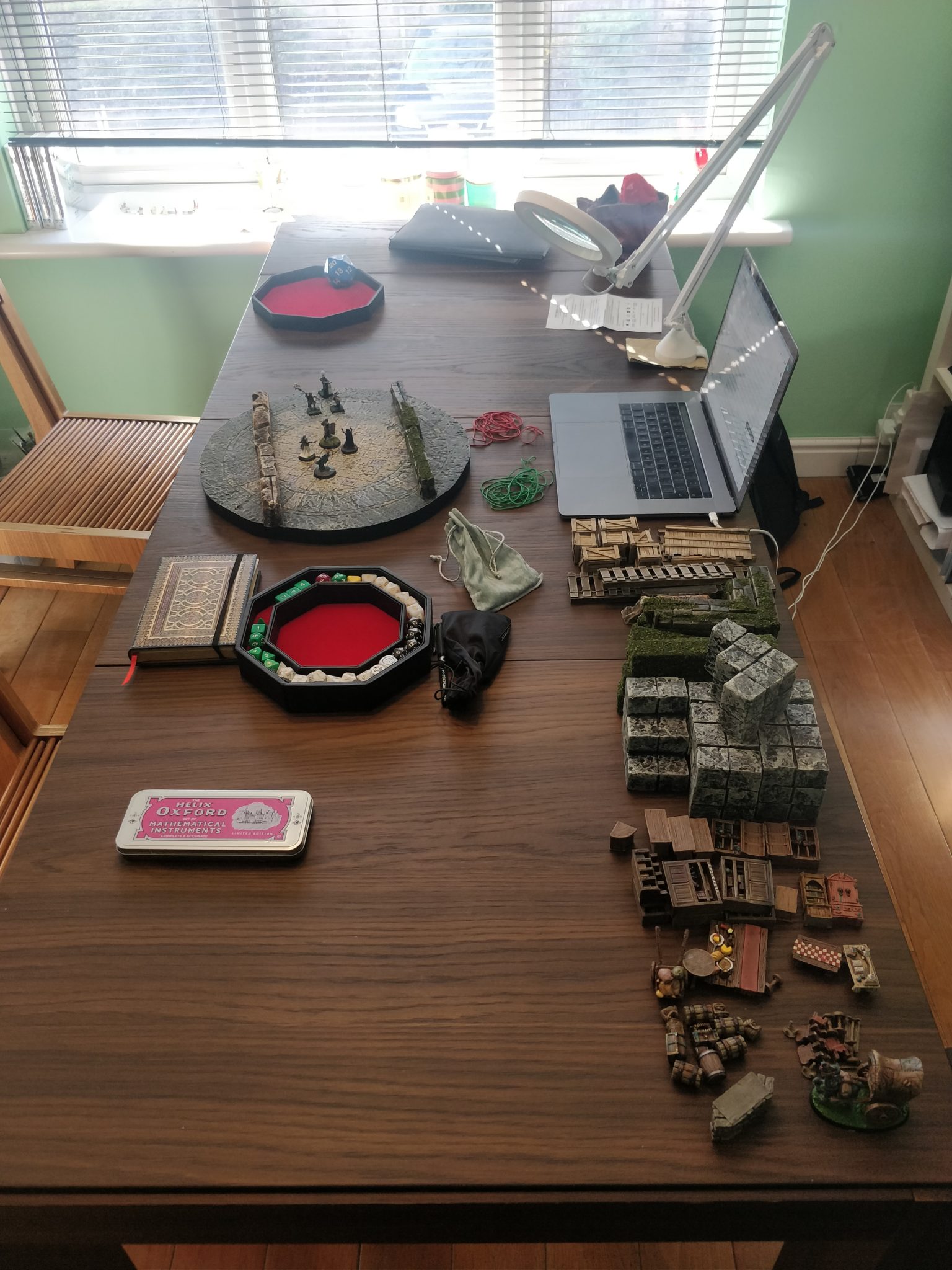