“You did this! I will fucking kill you!”

The normally cold and civilised Rizzo, leader of the Pink Ladies, had lost all her hair to a spell creating beautiful dresses for our heroes.

She was now at the doorstep of Amazin’ Glazin’, the bakery where our heroes were staying.

And she was not alone. With her was her Pink Ladies gang plus a large mob of roused to anger citizens.

Our heroes, Double Trouble, tried with spells and persuasions but the angry mob would not calm down. In a last desperate attempt, they fled back into the bakery.

Penny, the Necromancer, hurried to the back using a spell to Alter Herself as she fled. She transformed into a high ranking officer of the Balance, the local city guards.

Meanwhile Autumn, the Cleric, tried to hold back the crowd but fearing they would break down the door, she cast Word of Radiance to frighten the crowd, but the untrained citizens by the door fell like flies to the spell and the rest got even more angry watching their comrades fall in front of their eyes.

They broke down the door and just as they were about to fall on Autumn, Penny appeared in her Balance Officer disguise and “arrested” Autumn, calming the crowd.

Unfortunately, the crowd assumed Penny had fled and quickly the chatter turned to blame aimed at the School of Necromatic Studies.

But the situation was stabilised for now as Penny in her Officer of the Balance disguise led the “arrested” Autumn away.

A work with Oaken

Our heroes’ first stop was Oaken the half-orc Necromancer at the School of Necromatic Studies. The news had him worried that the Vigilance, the temple opposing the School, would use the incident to stir up animosity towards the School.

He also asked the duo whether the dresses were pretty.

Double Trouble decided that staying at the School was not safe for the neither them nor the school.

Having little choice left, Autumn suggested retreating to the Shelter of Sekhmet, a secret holy place only streets away known only to the followers of Nemeth.

DM note, Shelter of Nemeth also took me by surprise. Anna-Maria, the player of Autumn, invented this herself!

Without any significant trouble, the heroes made it to the alleyway where a secret door led down a staircase to the Shelter of Sekhmet.

Here the part was greeted by the Caretaker of Sekhmet, a very old white Dragonborn, still wearing his plate armour hinting of royal lineage and days of battle long gone.

Here they were safe.

While they were planning their next move, Lilian, a seriously wounded young woman and Sekhmet believer, was brought in to be healed. She had been caught in Autumn’s spell earlier, but was now healed and left embarrassed at having attacked the bakery.

She could tell the heroes that most, if not all, the people hit by the spell had been tended to, much to Autumn’s relief.

Roads in the Shadows

The heroes decided to make used of the back alleys to make their way largely unseen to the Dressmakers.

They had started to noticed an intricate labyrinth of unremarkable, shadowy narrows streets, back alleys and semi-hidden passages throughout the city.

The dresses were finished and waiting for them. Magical to look at, spun of the fair hair of Rizzo and the flame breath of Carnivax, the old red dragonborn baker Autumn lived with.

In the end curiosity overcome suspicion and both ladies dressed in the magical dresses and left the shop, heads held high.

The transformation was complete.

The Balance and the Vigilance was looking for a full armoured Cleric and a black-clad Necromancer with a large black witch’ hat… Not two beautifully dressed, elegant citizens.

The Blitz and The Gossip

However, Double Trouble realised that they would not be admitted to The Blitz. Steve Strange, the tall slender expressionless doorman, would not admit them without tickets, although he did compliment their dresses.

Instead, our heroes went to The Gossip, the trendy tavern run by the Androgynous Albino Tiefling, Pearl, to be seen and noticed in the hope of getting an invitation to The Blitz.

And noticed they were.

Everybody staring at them with admiration and hunger. Impressed, jealous and desiring the dresses more than anything else.

Pearl was equally impressed and made no effort to hide his desire for an outfit like theirs.

Pearl told them that to get a ticket, they had to dance in the town square at midnight exactly and then rush home to sleep.

Penny decided to spend the time before midnight dancing with people in The Gossip, while Autumn stayed in the bar uncomfortable with the whole thing… which other guests took as an impressive display of being the cold and silent type.

Dancing in the Moonlight

At midnight, Double Trouble went to the town square to dance as advised.

After a few elegant pirouettes, the heroes heard a lone pair of hands clapping followed by Pearl’s distinctive voice.

It was a trap. Pearl desired a dress more than anything else. They offered The Gossip as payment, but when the heroes refused to hand over one of the dresses, members from The Dapper Gents, another known clique of party people, surrounded the heroes. 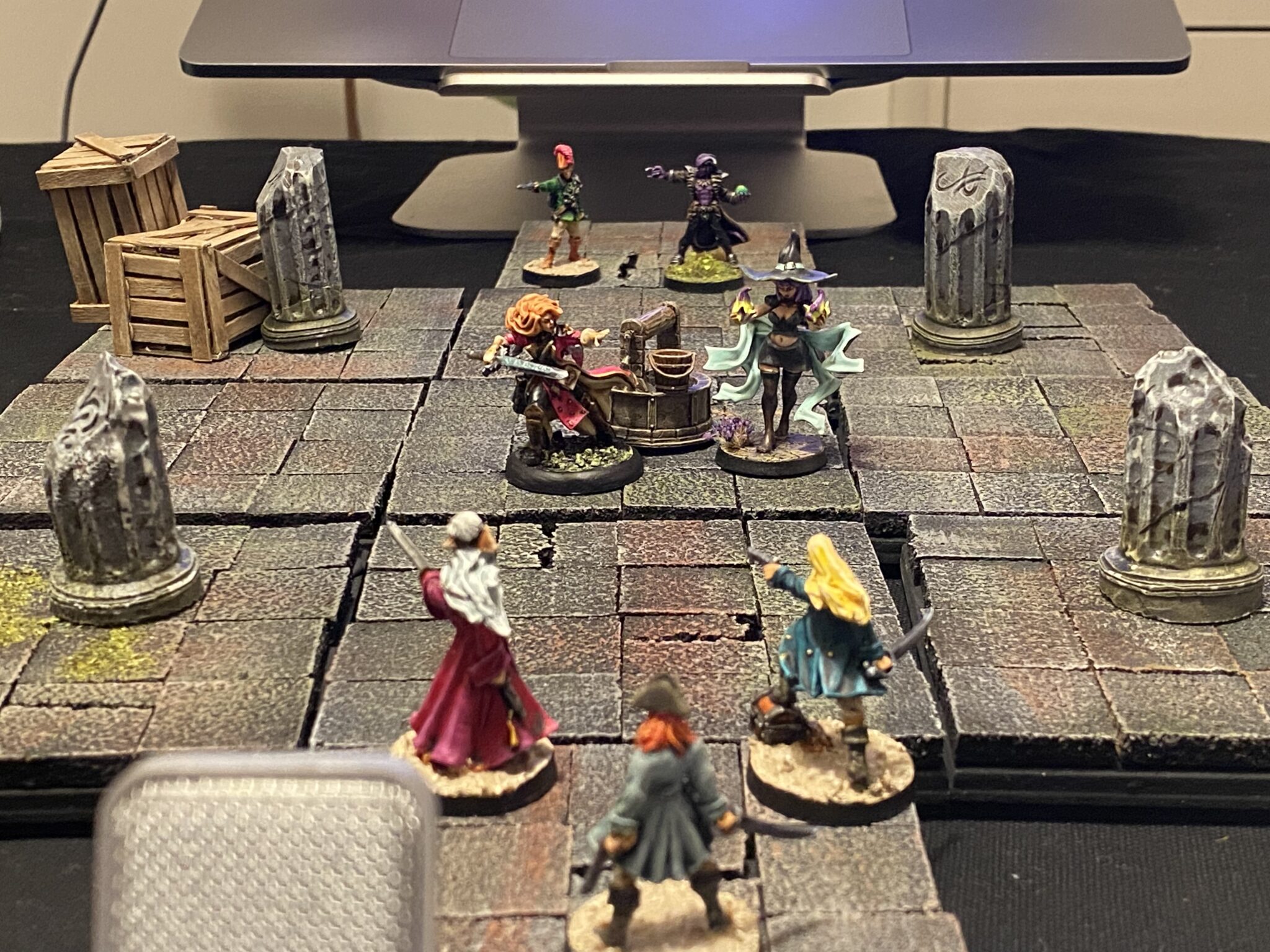 A with that a fight broke out. 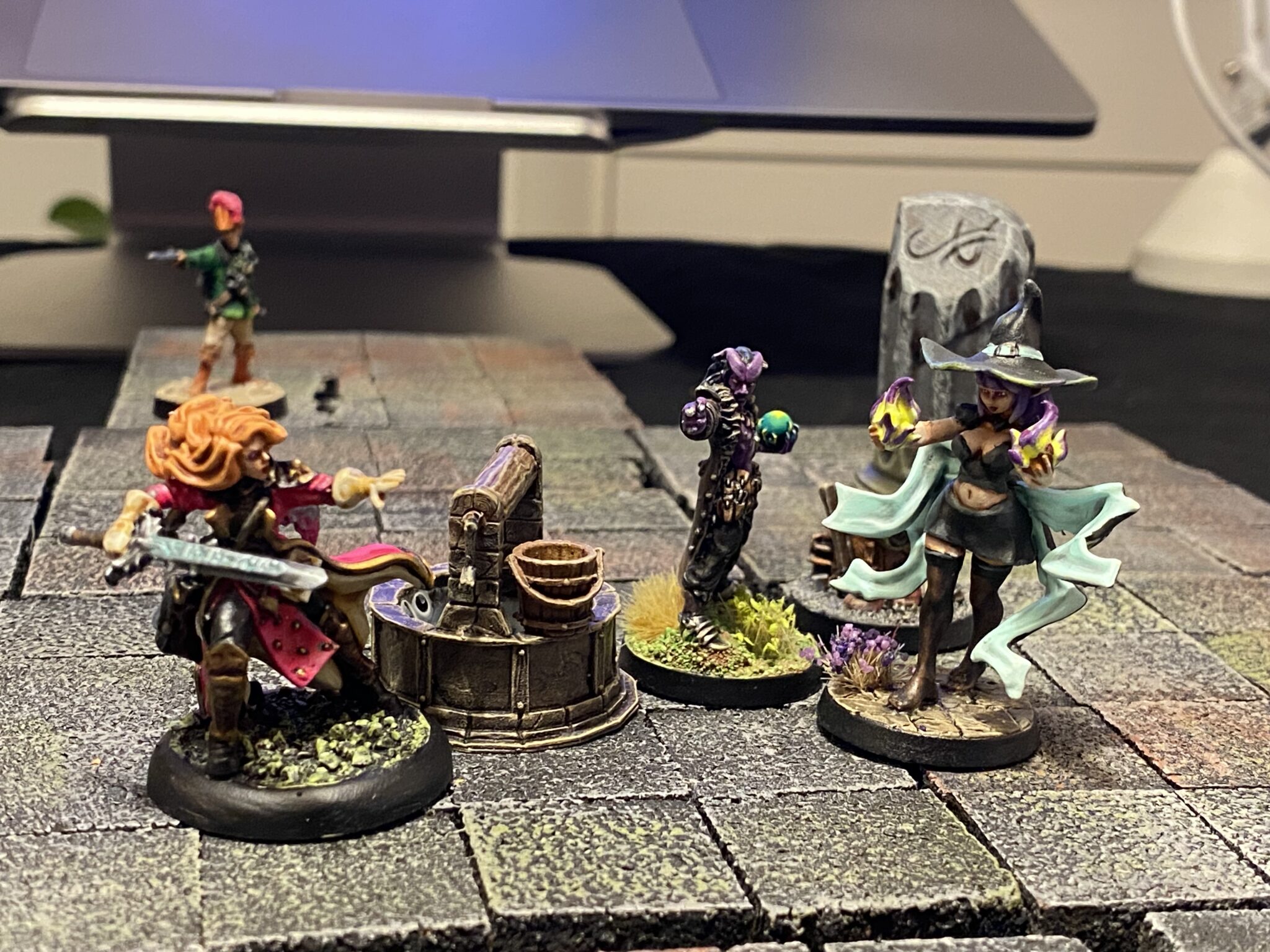 While Double Trouble was stronger and aided by the magic and divine spells, the assailants where many. 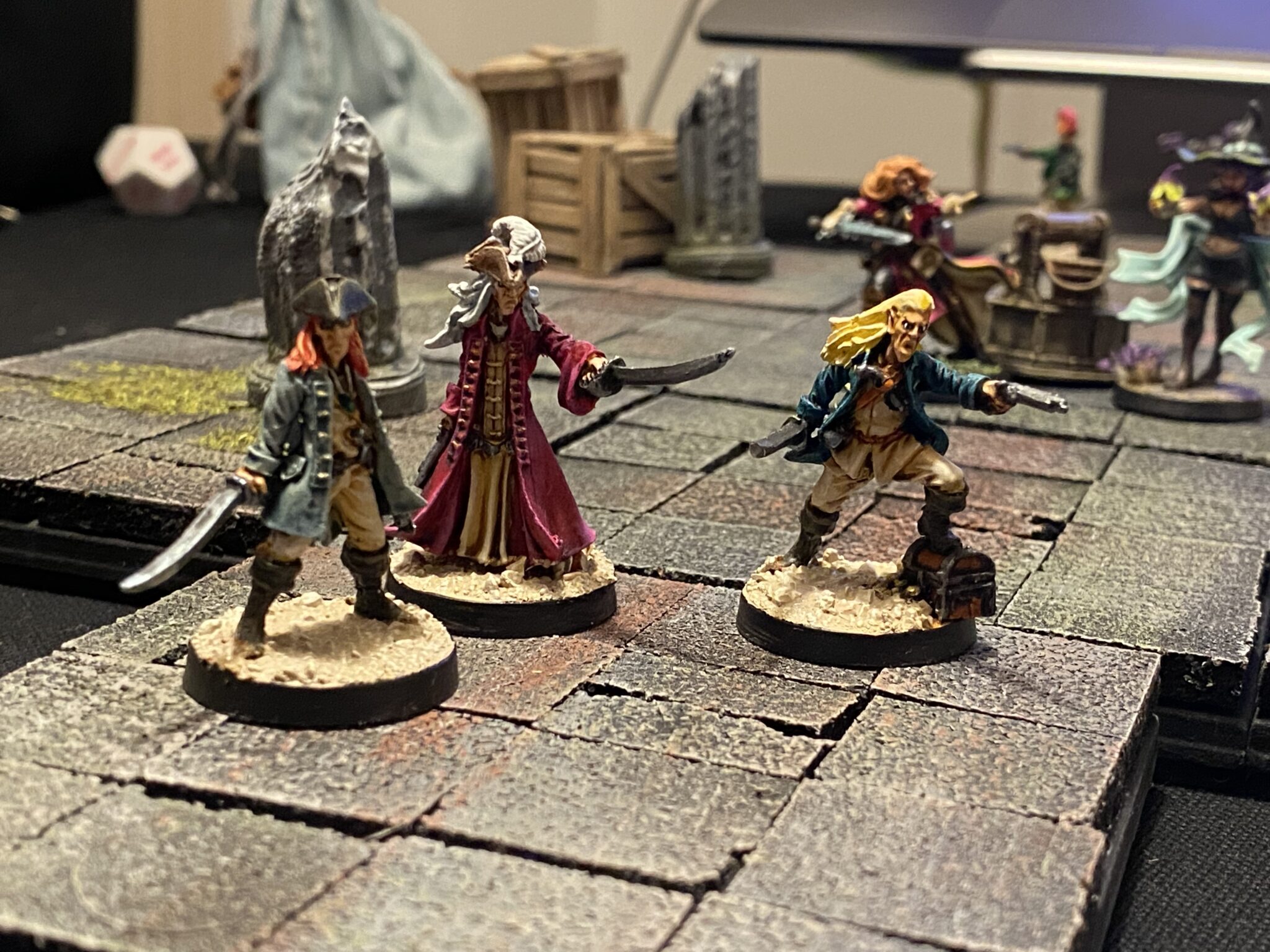 Autumn summoned a Spiritual Sickle to even the odds.

And further into the fight Penny summoned her Pony of Terror to route several of the Dapper Gents. 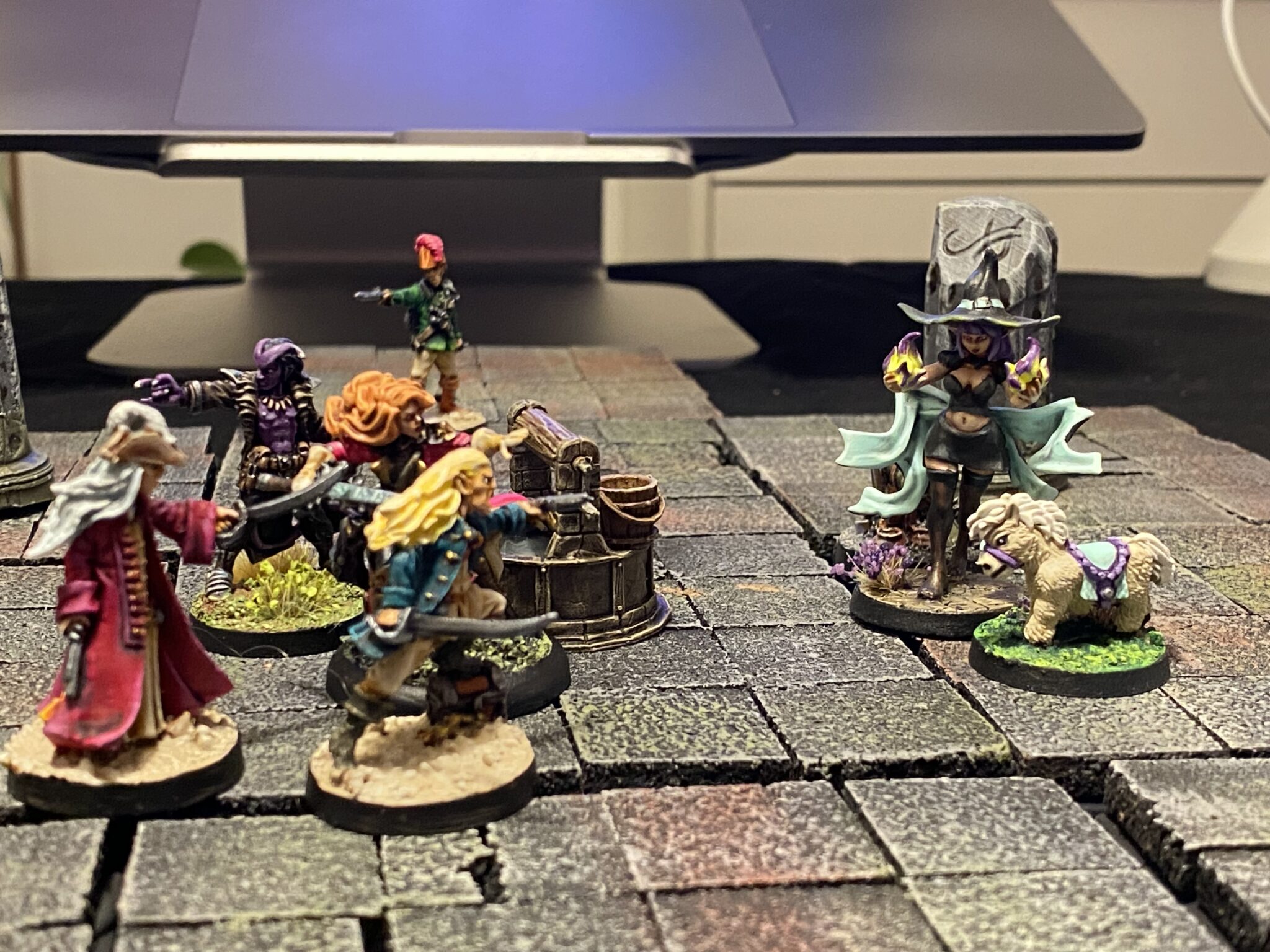 But Penny was still standing. With Magic Missiles she ended the Albino Tiefling and ran down the last standing Dapper Gent crushing his head with the hooves of the Pony of Terror. 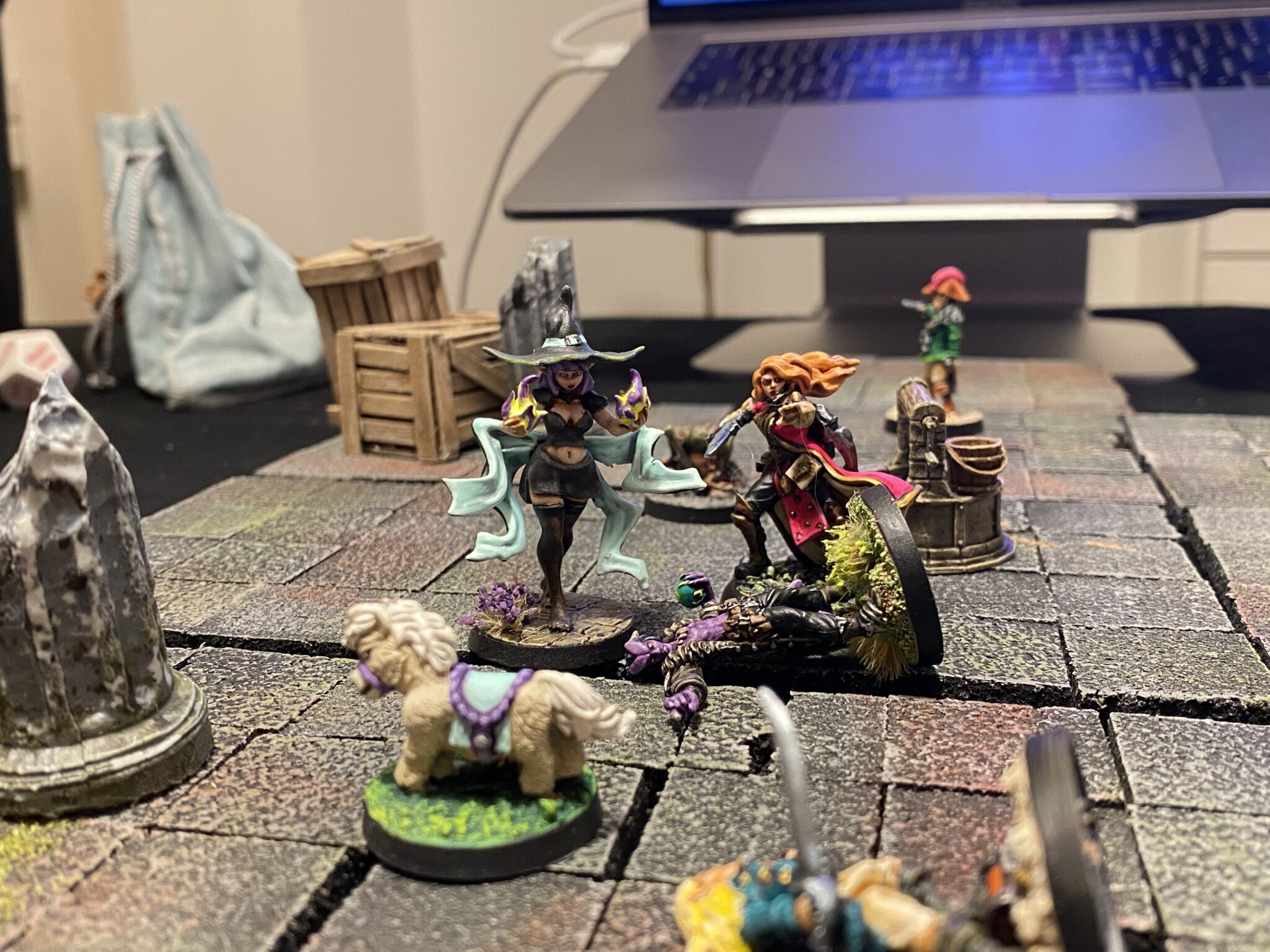 The fight was won, but Penny had to rush Autumn to the Shelter of Sekhmet to revive and stabilise her.

The two heroes went to bed for a much needed rest.

During the night, Autumn awoke and found a golden ticket shimmering in the air in front of her.

She quickly woke Penny and both stared at the magical tickets that only said two words: 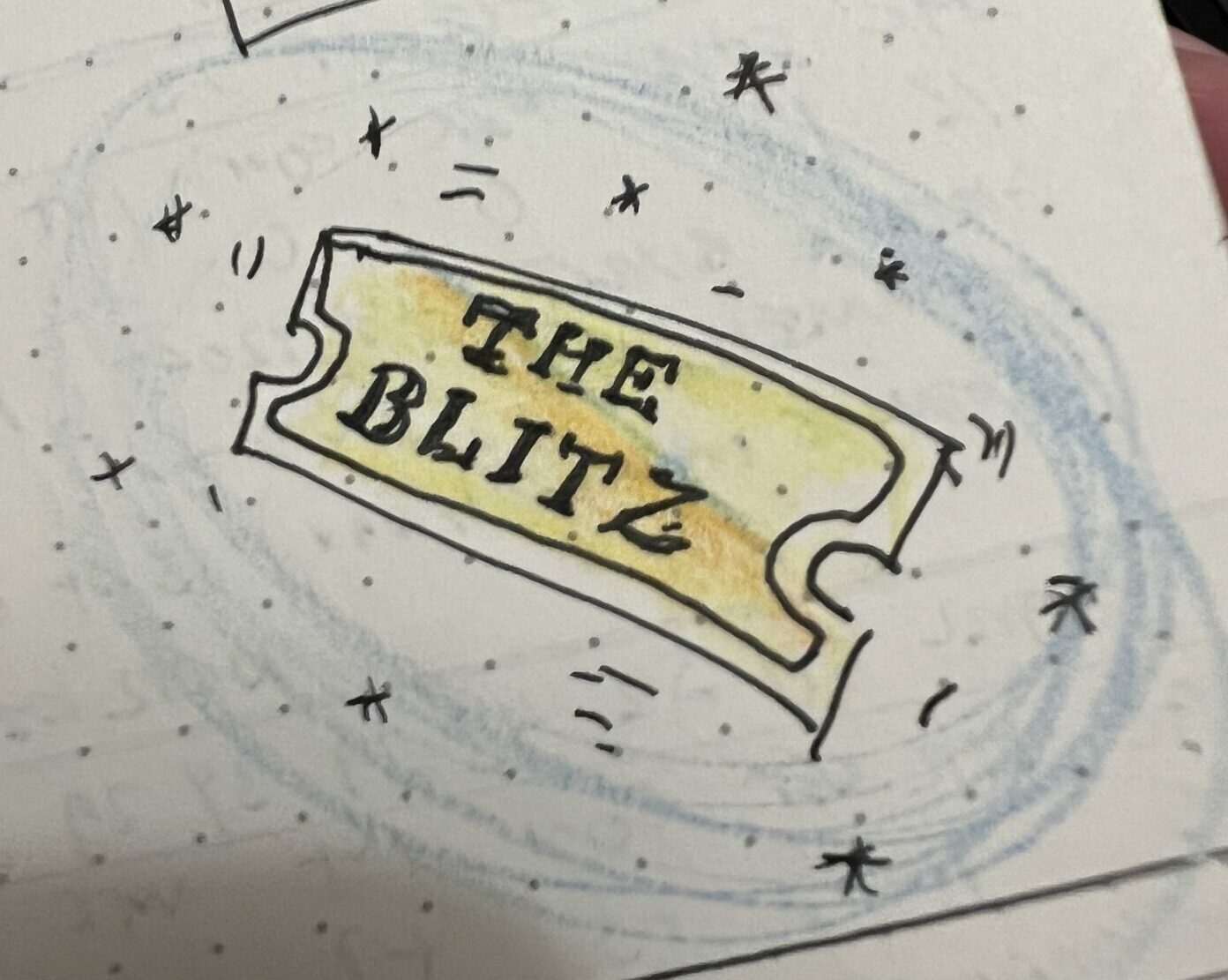 I find city based adventures are more complex run, not meant in a bad way, just different. One of the things is it is really hard to predict what the players will do as they have so many options so below is a short video of how many minis I had readied to cater for whatever might come. 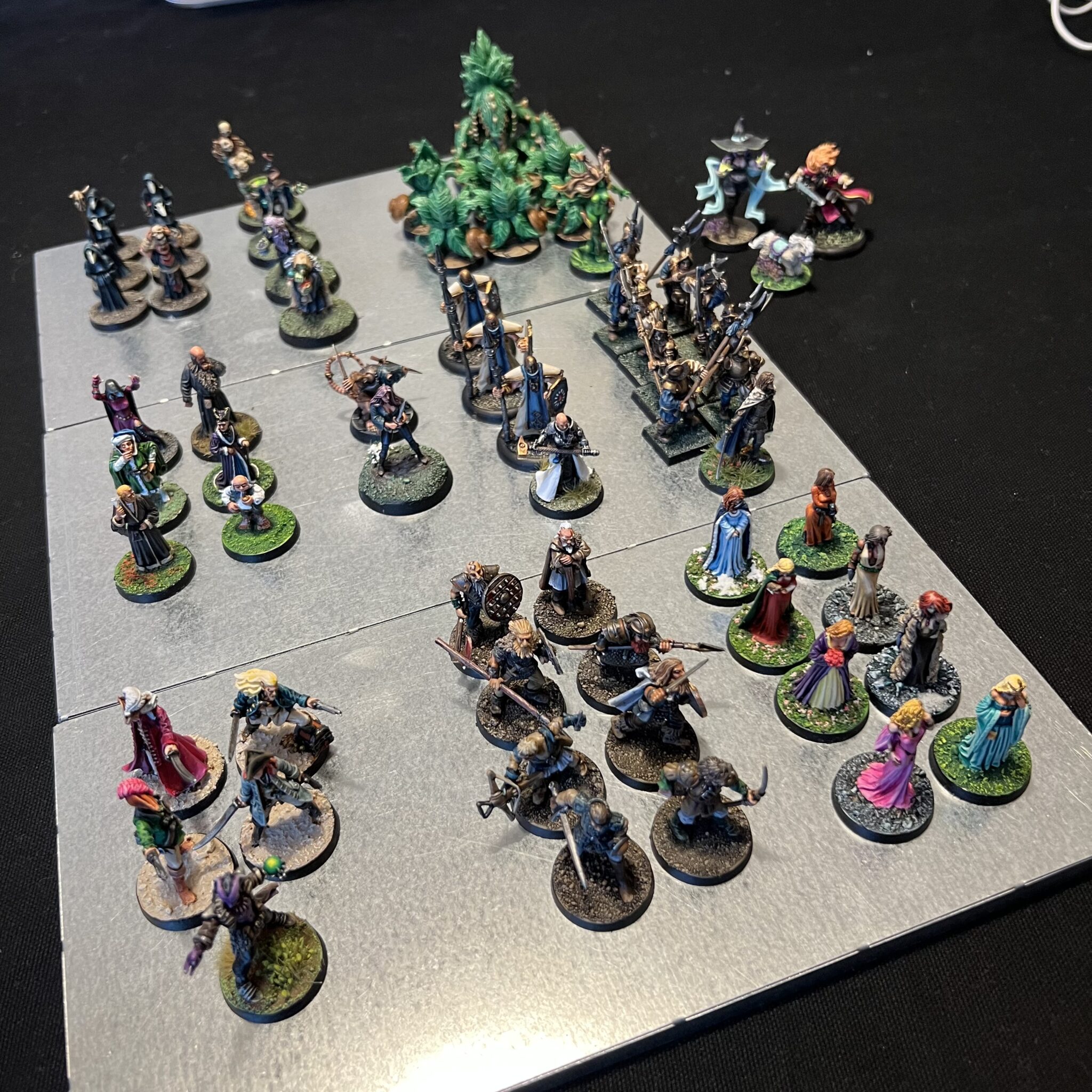