This is the last Dungeons & Dragons game I will DM in London for the foreseeable future as we moving to Denmark.

The last couple of weeks for our heroes have been slow.

It has given them time to sit ate the Silver unicorn and think about and discuss what actually happened when they arrived at Twobridges. The more they discuss, the less everything makes sense:

How does all this add up?

Tired the heroes return to their sleeping quarters, only to be attacked in the middle of the night by some sneaking Ratmen.

As the heroes battle the surprise attackers, the Ratmen suddenly turn tail and it doesn’t take long before our heroes realise the tavern is on fire!

However, some cool thinking by Seipora, our Tiefling Sorcerer meant the party easily escaped through a window she cooled using Ray of Frost. 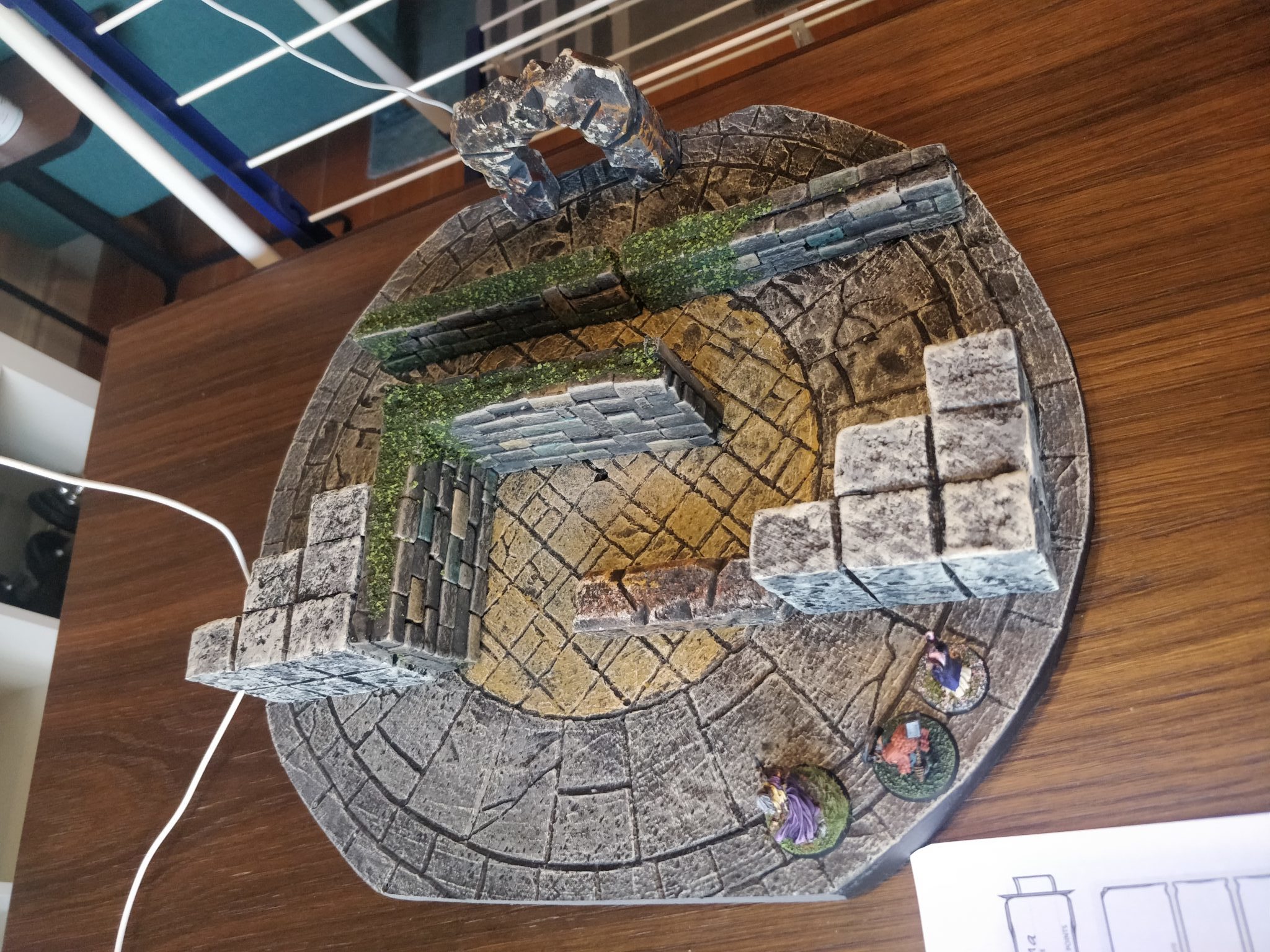 Outside the burning tavern, the heroes see the innkeeper shouting in tears at the Sheriff, who is trying to calm him down. Apparently the Sheriff decided to burn the tavern to dispatch of the Ratmen that has increasingly plagued the town.

Next to the Sheriff is the little girl who is just standing staring at the fire mesmerised.

Nearby civilians are voicing concerns that recently the Sheriff seems to use fire to solve all sorts of problems:

But as the tavern fire is brought under control, the talk is changing to the menace that is the growing number of Ratmen.

While our heroes recognise the Ratmen is a problem and that the nest has to be found, they are more concerned with the Sheriff’s recent erratic behaviour (and unusual fascination with fire)  and decides to pay a visit to his office as it is still late night/ very early morning.

They don’t find anything fire related in his office, but they do find some sketches for a playhouse he has made for his adopted daughter in the backyard. Curiously, it is built on a tunnel leading underground.

The heroes visit the playhouse, which, to their surprise, looks creeping and old. Full of moist, fungus and old timber.

Torgga, the Dwarven Paladin, steps into the house in her noisy chainmail. She sees a big face in the wooden planks moaning about a migraine. Before she can do much she is hit by a tiny dart, that at first, doesn’t seem to do much, but when she turns to call the rest of the party in, she realises her voice is gone.

Aerendyl, the Fighter, steps past Torgga quickly scouts the scene realising a noise clock in the little house, may be causing issues. He smashes the clock and the face turns a frown to a smile and with a big relieving “aaaaaah” it opens its mouth revealing a stairway down.

The heroes quickly decide to go down deep reaching a long quirky and uneven hallway.

Scouting ahead, Aerendyl is suddenly faced with two Ratmen, who seems more interested in reaching the stairs going up.

They pass him easily, but as they try to climb up the stairs, the Paladin and the Sorcerer makes short process of them both. 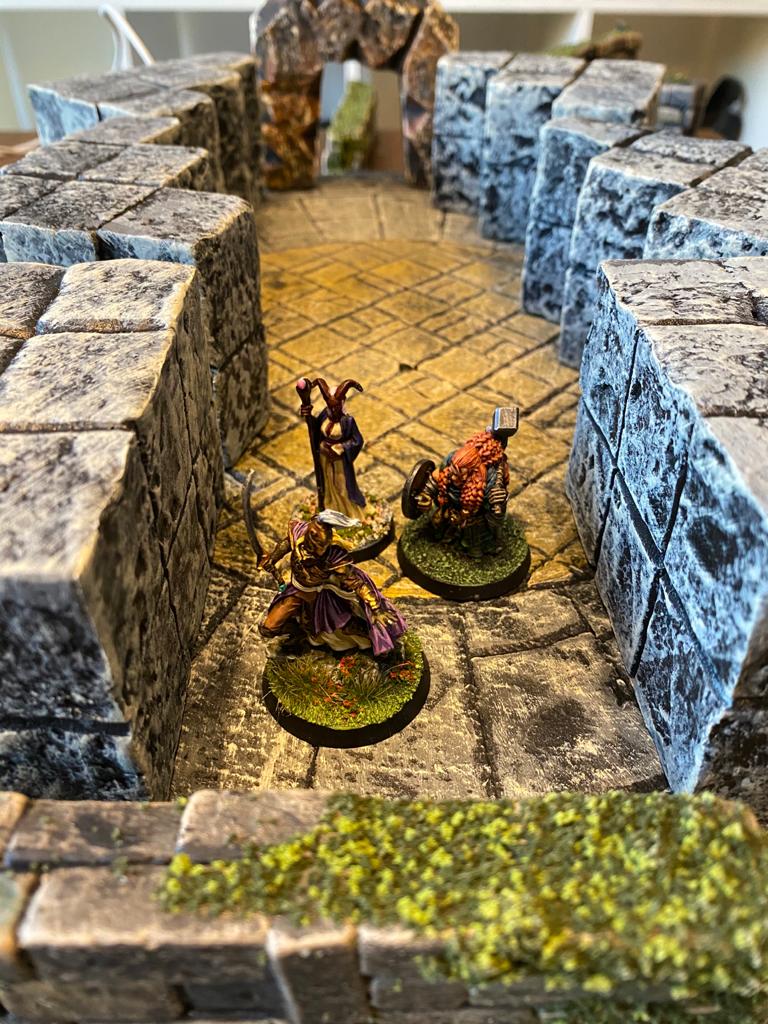 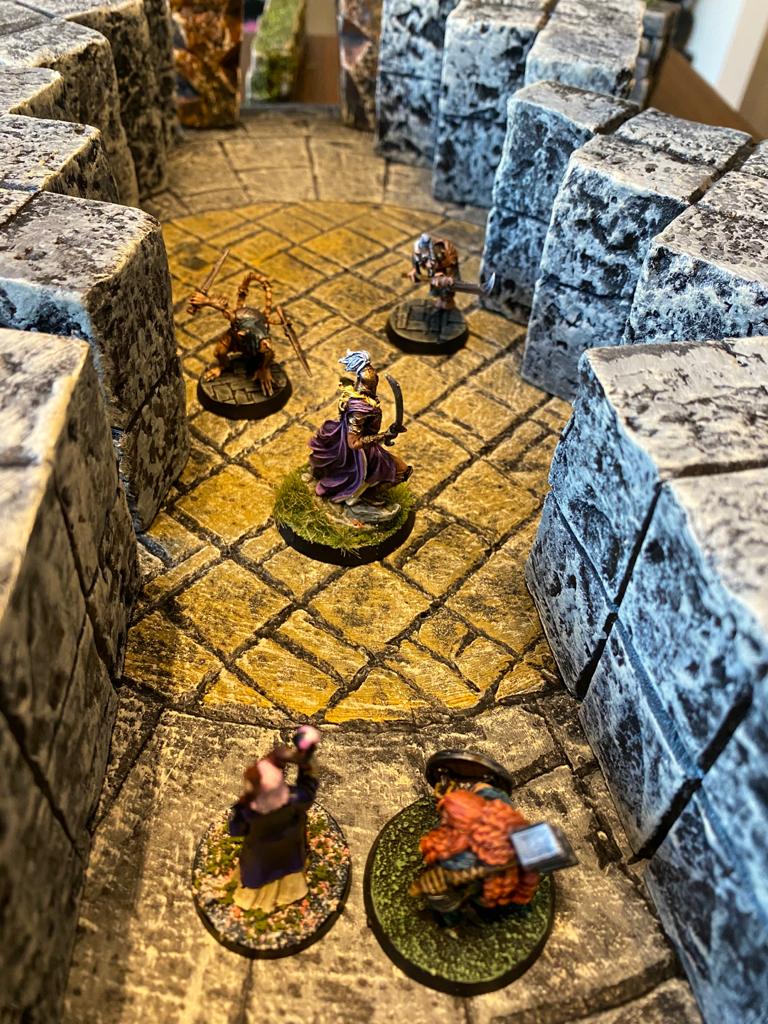 A moment of silence arrive in the hallway before the party hears the annoying but familiar screeches of the little Gazers shouting “hag hag hag”. But as with the previous encounter with these little annoying monsters, the party quickly dispatch them and continue down the hallway.

Turning the corner, they see a big room with a Spectator in the middle of Ratmen bodies scattered. With its back to the heroes, it doesn’t notice them, which gives the party a chance to back out and formulate a plan of attack. 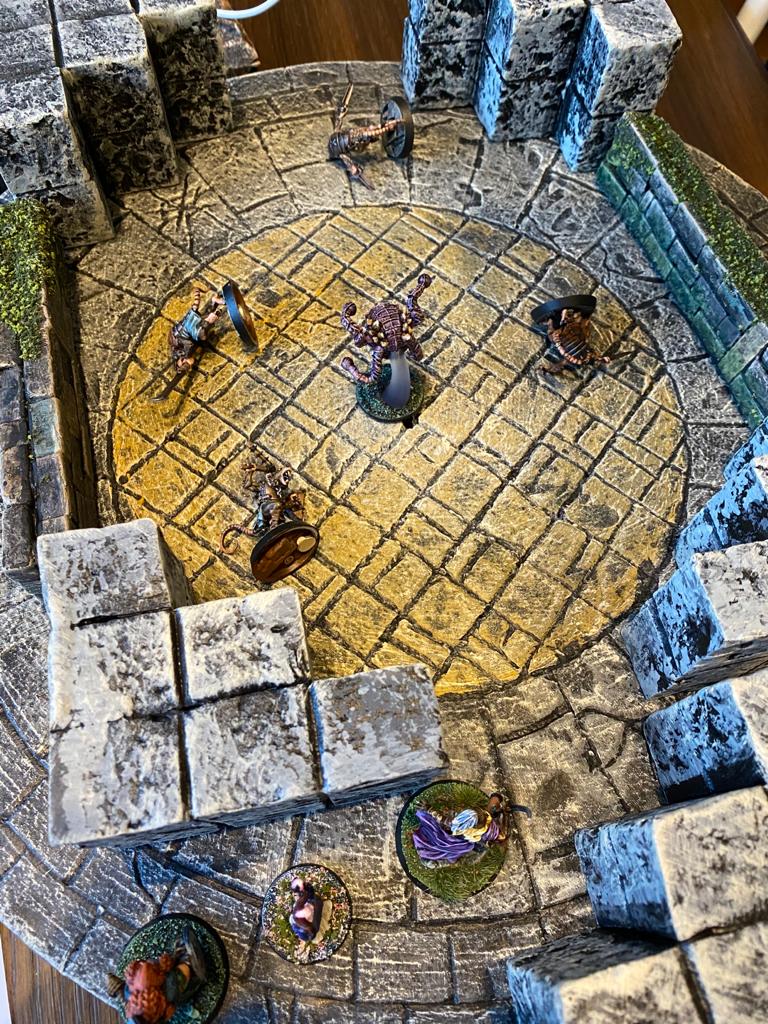 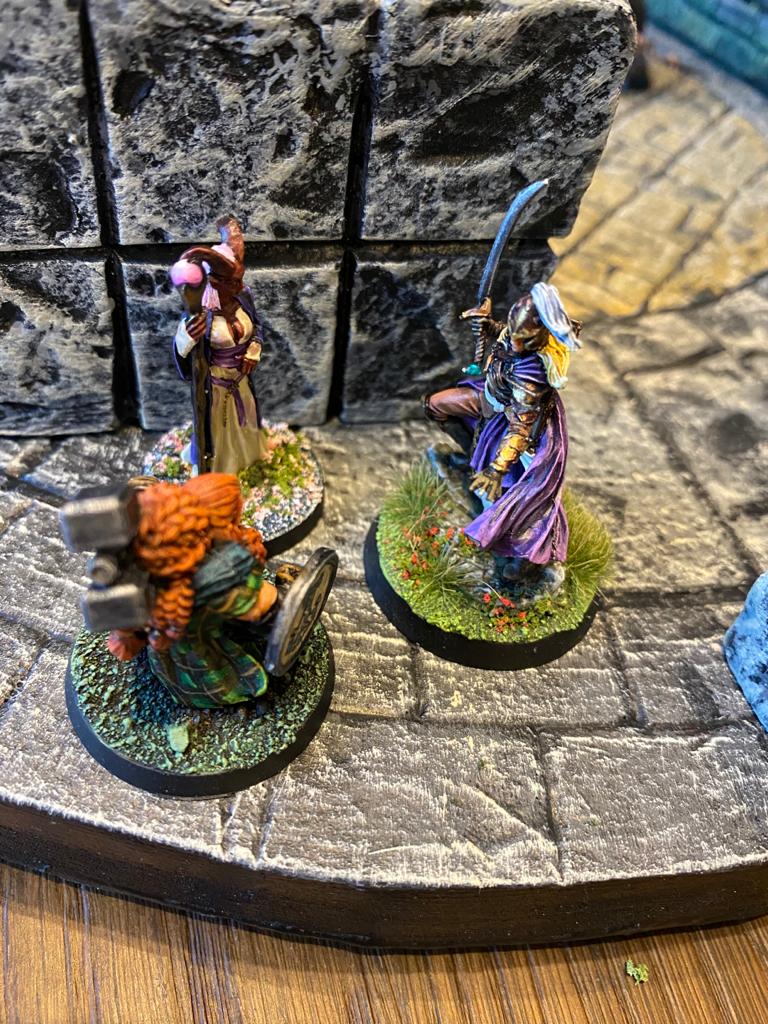 As they rush in to surprise the Spectator, they see a Hag at the far end of the room. Seipora immediately panics at the sight of the horrible creature and runs back out again.

The Hag equally surprised, hisses at the party before turning invisible to escape. However, the experienced Aerendyl manages to shoot and wound the hag before she escapes out the back entrance.

in the meantime Torgga punches the Specator so hard that it is smashed into the ground followed by spells from Seipora, who has returned to the room after recovering her wits. 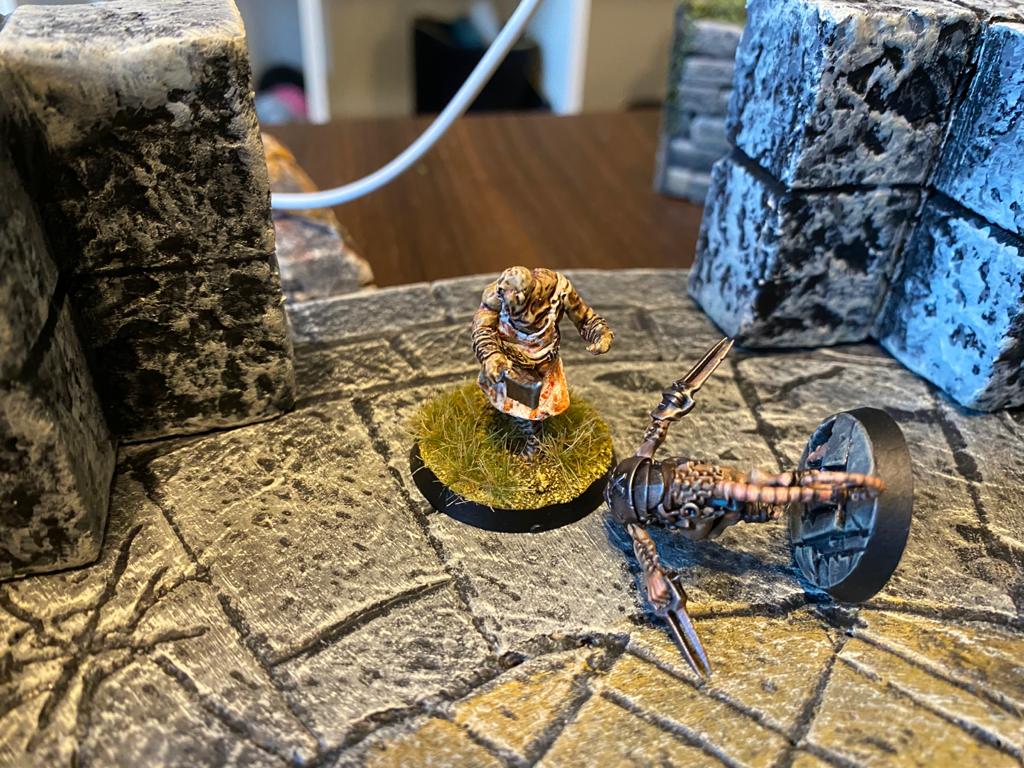 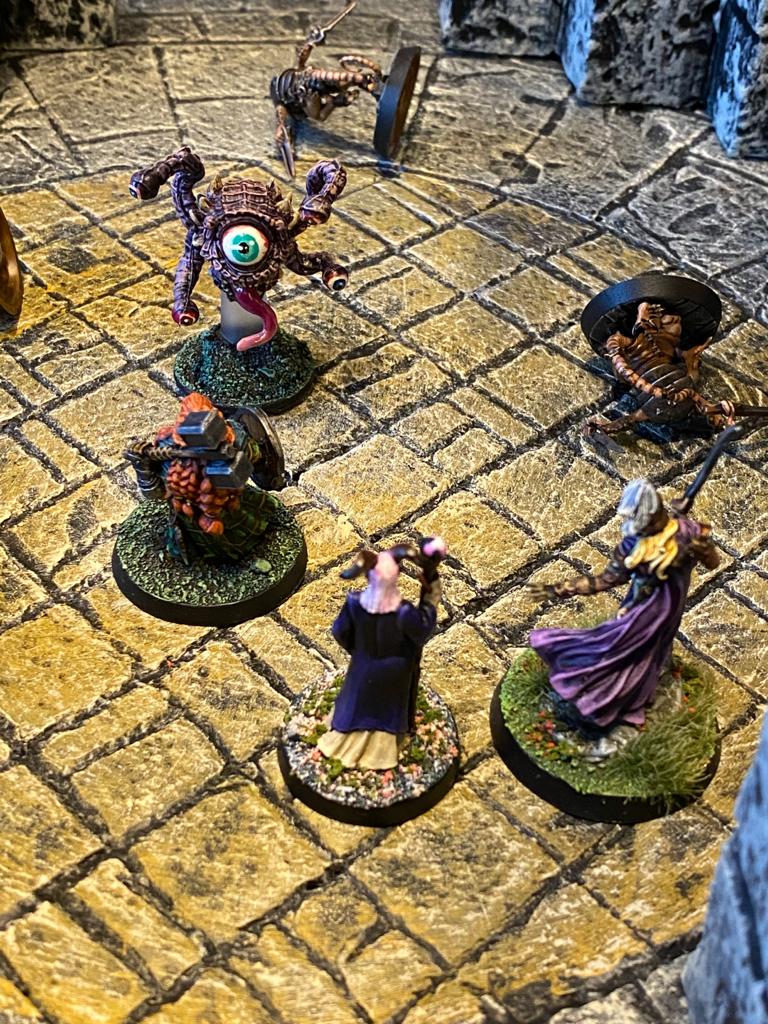 The party rushes after the Hag and find themselves in a huge natural cave lit my fluorescent mushrooms lining the walls, with weed on the ground with a thin mist as a blanket. In the back of the cave is a small, very old house and in the middle of the cave stands the girl.

She invites them in with a smile that grows wider and wider and unnaturally wider as her nose grows and her hands grow to massive clawed hands while her body remain that of a girl. Again the party is shocked, but stands their ground. 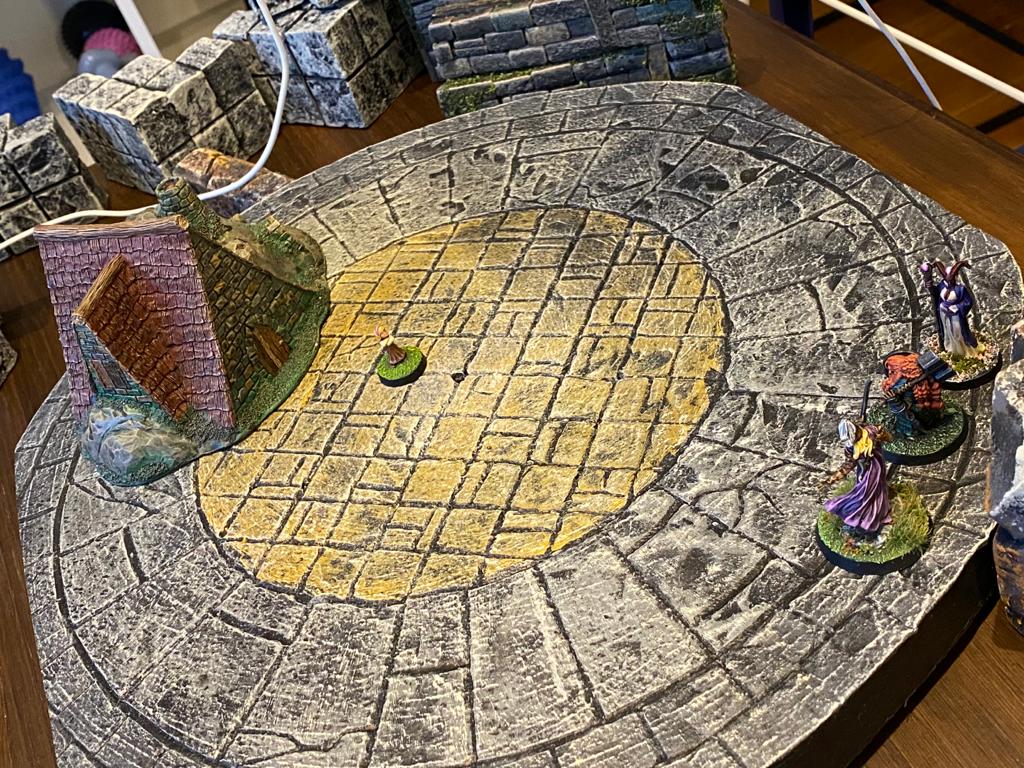 The girl, frustrated that the heroes can withstand her Horrific Appearance, fled behind the house giggling.

As the heroes moved closer to catch the girl, Aerendyl used his Mage hand to signal a “come here” gesture to the girl to come out.

DM Note: A failed persuasion role meant the girl stayed where she was, but the trick was awarded Inspiration nevertheless.

Suddenly two additional Hags, including the one already wounded, materialise next to the entrance blocking the path out. it’s a trap! 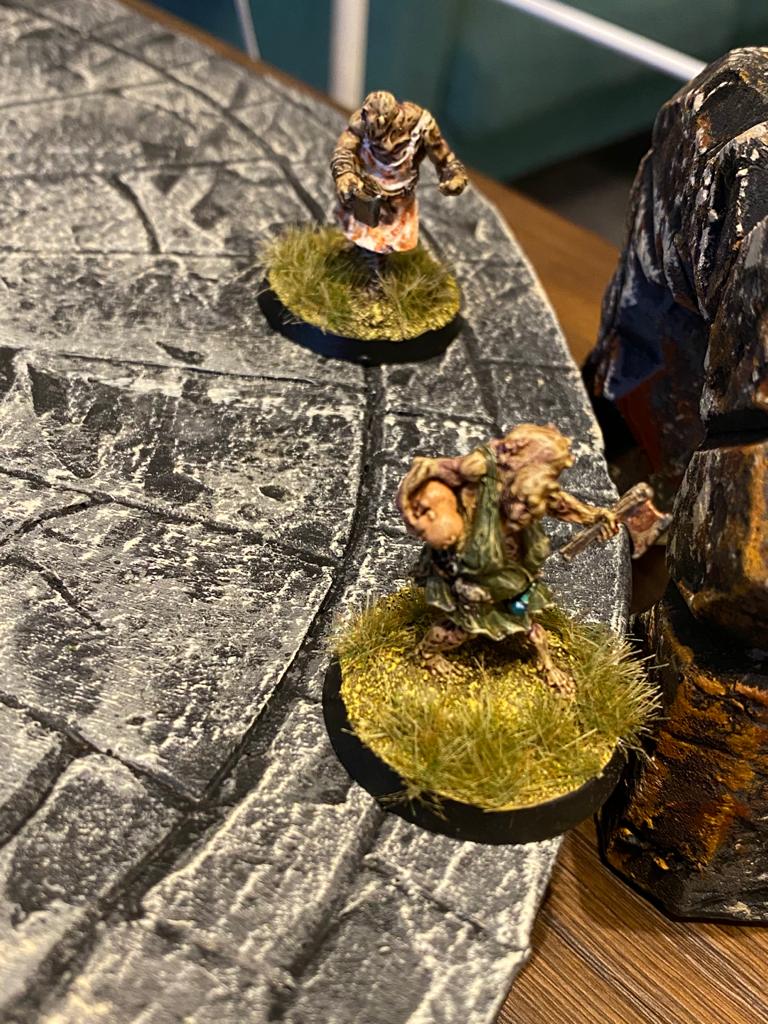 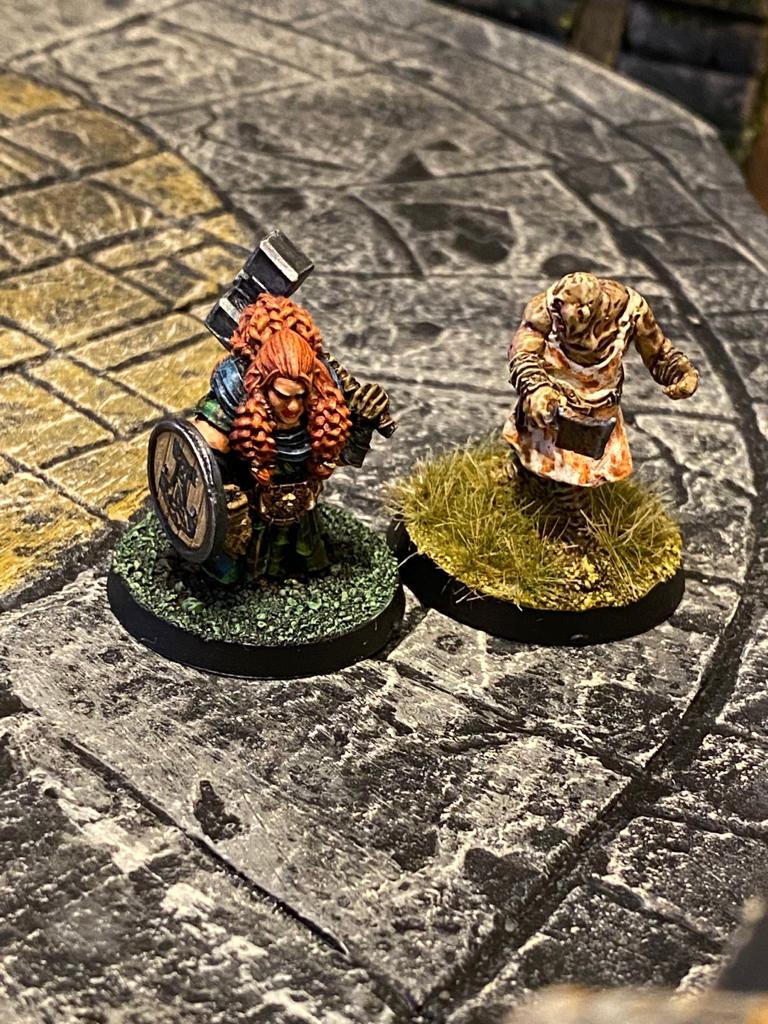 The heroes are facing the fight of their lives. Aerendyl and Torgga each face off to the two Hags, leaving Seipora alone to chase the girl and that has deadly consequences as the girl place her Deadly Gaze upon the Tiefling. Seipora feels her soul being crushed by the the gaze and drops to the floor. 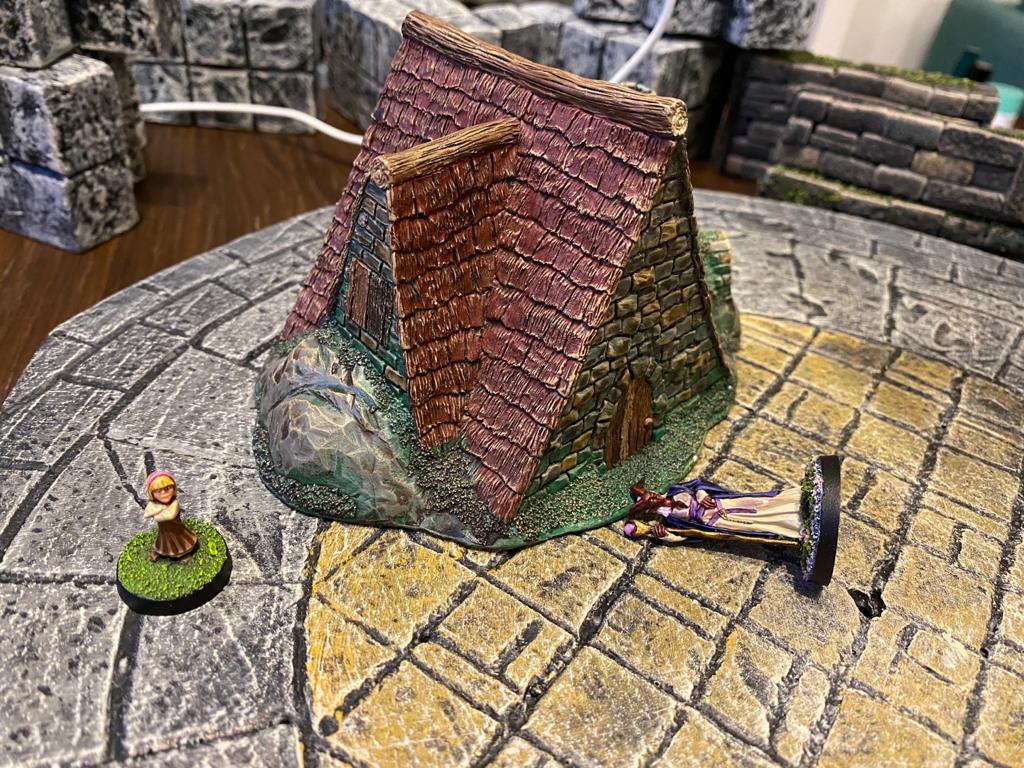 Torgga realising the gravity of the situation, disengages and rushes over and lay her Healing Hands on the Seipora.

The girl frustrated starts screaming “daddy, daddy, daddy” and Seipora and Torgga hear the Sheriff’s voice calling back from the house.

Seipora quickly runs into the house. The Sheriff seeing a friendly face, do not suspect any foul play, so it is easy for her to grap him and push him outside the door to see what his adopted daughter really is.

As the Sheriff isn’t under any charm spell, he cannot deny the facts in front of him and the heroes quickly exterminates the three Hags.

Back in the Sheriff’s office, the heroes piece together what has happened:

The Hags, wanting to infiltrate Twobridges, came up with a plan to disguise one of them as a little helpless girl captured by a Troll. As Trolls are highly unpredictable, they hired an Ogre, who dressed up to play the part.

The idea was that some good hearted, but unwittingly, people would rescue “the girl” and bring her inside the city walls and somehow place herself in the care of somebody in power. The Hags never thought that last part would have been as easy as it turned out to be.

From there, it was a case of smuggling the other two Hags in, to complete the Coven and start their terror on Twobridges.