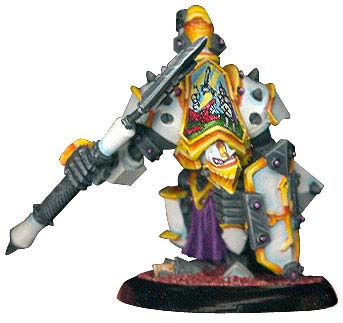 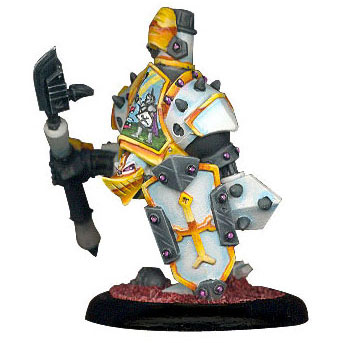 At the time writting this I am actually a Cryx player, but I had this idea that a mideval painting on the big plates of a Menoth jack could look cool so I decided to buy a Menoth jack to try it out. This is the first time in years I am painting a miniature I don’t need for an army. I think last time I did something like that was in 1997, that’s six years ago.

I painted the gold as non-metalic-metal which isn’t really the best technique to do battle-worn warjacks but I didn’t want too many details on this jack. Also I think followers of Menoth are the people most likely to keep their machine well maintained.

As old mideval paintings I want this to have a heroic motif and some symbolic and divine bits as well.

The main motif is a knight standing threathning with sword raised high over a dragon. However a dragon is larger than a knight so I lowered the dragons head to be lower than the knight to get the effect of a fearfull dragon.

The knight has the Cross of Menoth on his shield to remove any doubt of alligance and he has a purple cloak to create a connection between him (and what is happening in the painting) and the Revenger.

Behind the knight and the dragon a secondary story unfolds in which there is an divine intervention from Menoth (the yellow sun rays) to stop an advancing horde of undead, in the shape of a seleton behind the dragon who holds his arm up in fear of the rays.