As the Frost Giant swung it’s axe, it went far above the head of the party and they quickly regrouped to mount an attack.

Kaari went first sprinting towards the back of the room behind the giant. As she left the others behind, she was hit in the back by an unseen force, but kept running. 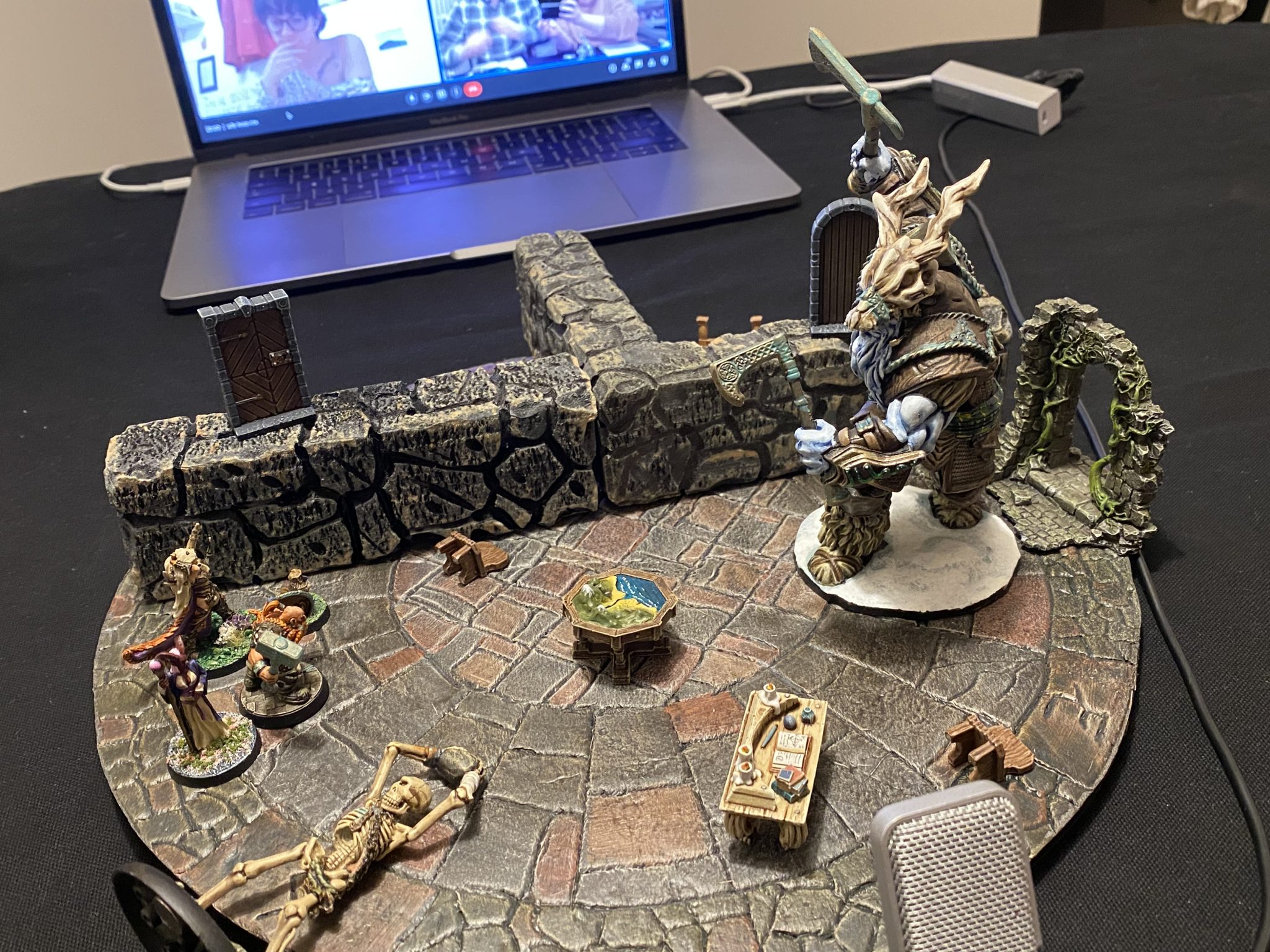 Thorga was next, taking a massive necrotic blow, again from behind. Confused he turned around and swung his hammer to where the invisible assailant might be.

Half expecting to hit thin air, his hammer struck true and with Branding Smite, he revealed a huge ghost of a giant. 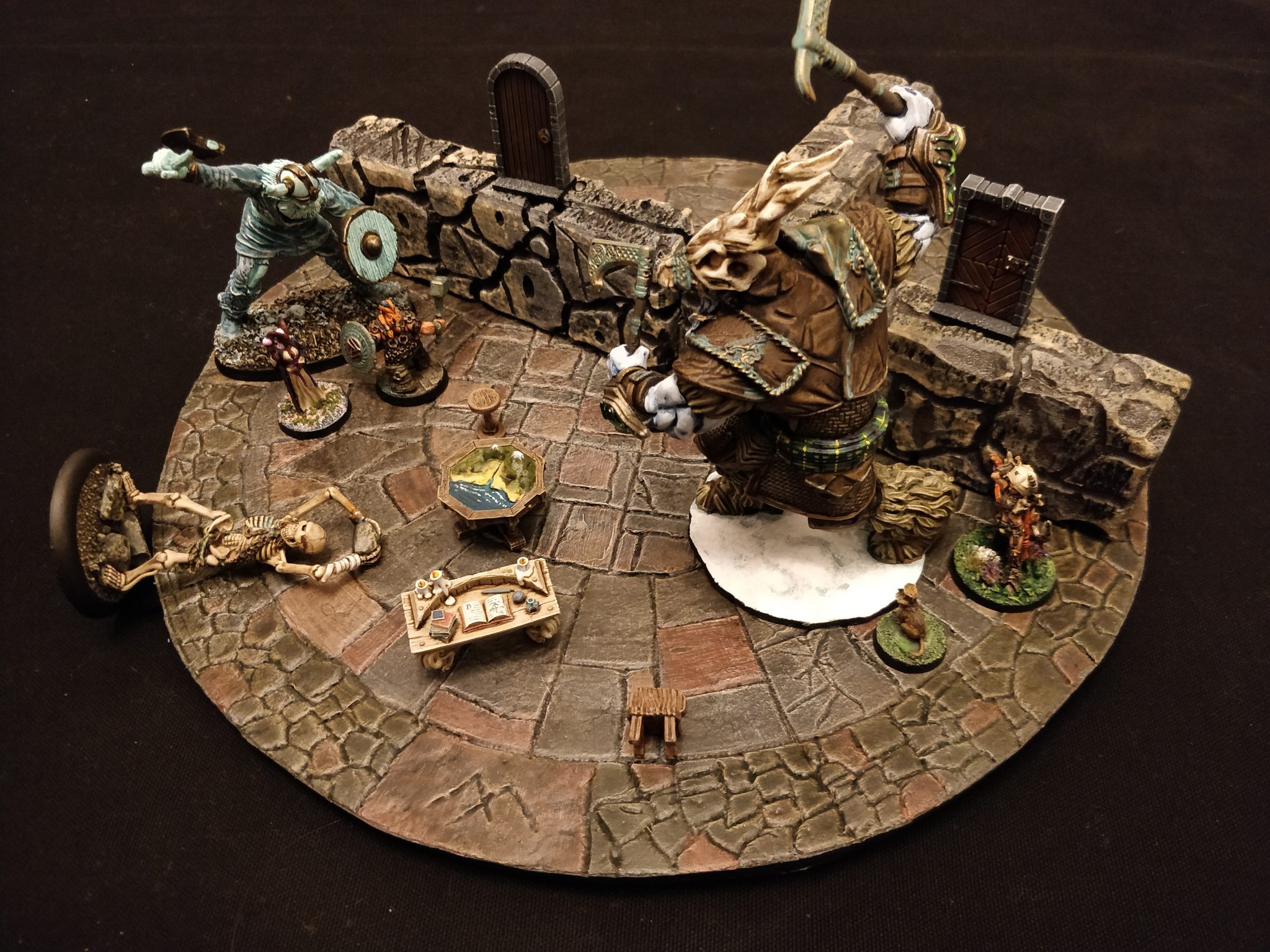 It screamed in rage making Seipora flee towards the Frost Giant, just as the Frost Giant lept forward again swinging the axe in the same arc, but this time it was clear he was aiming at the ghost, not the party.

As the party focussed their efforts on the ghost, they quickly banished it and in doing so, released the Frost Giant trapped in an endless loop in an endless fight.

Relieved, the Frost Giant withered away in front of their eyes managing only to say “thank you” and to give them a massive horn that could be used to call for aid.

Examining what was the bottom level, and essentially the top floor of the upside down tower, the party found an invisible chest matching the semi-invisible key they had previously found and in the chest they found a gold mine of magic items: A Scroll of Meteor Strike, A Portable Hole, a semi-broken Box of Need and a Scimitar of Speed.

The party they left the tower and found themselves outside at the foot of Titanheights with Somberwild Forest in front of them. cross the forest they saw Wildergate and further yet the great lake caused by the magical attack with Dragonskeep on the newly formed island that used to be the top of a mountain now brought down by the magical attack.

Walking through the forest the party soon found themselves in an ambush lead by the might Bazuk the Brawler, a goblin chieftain slightly larger than his troops. 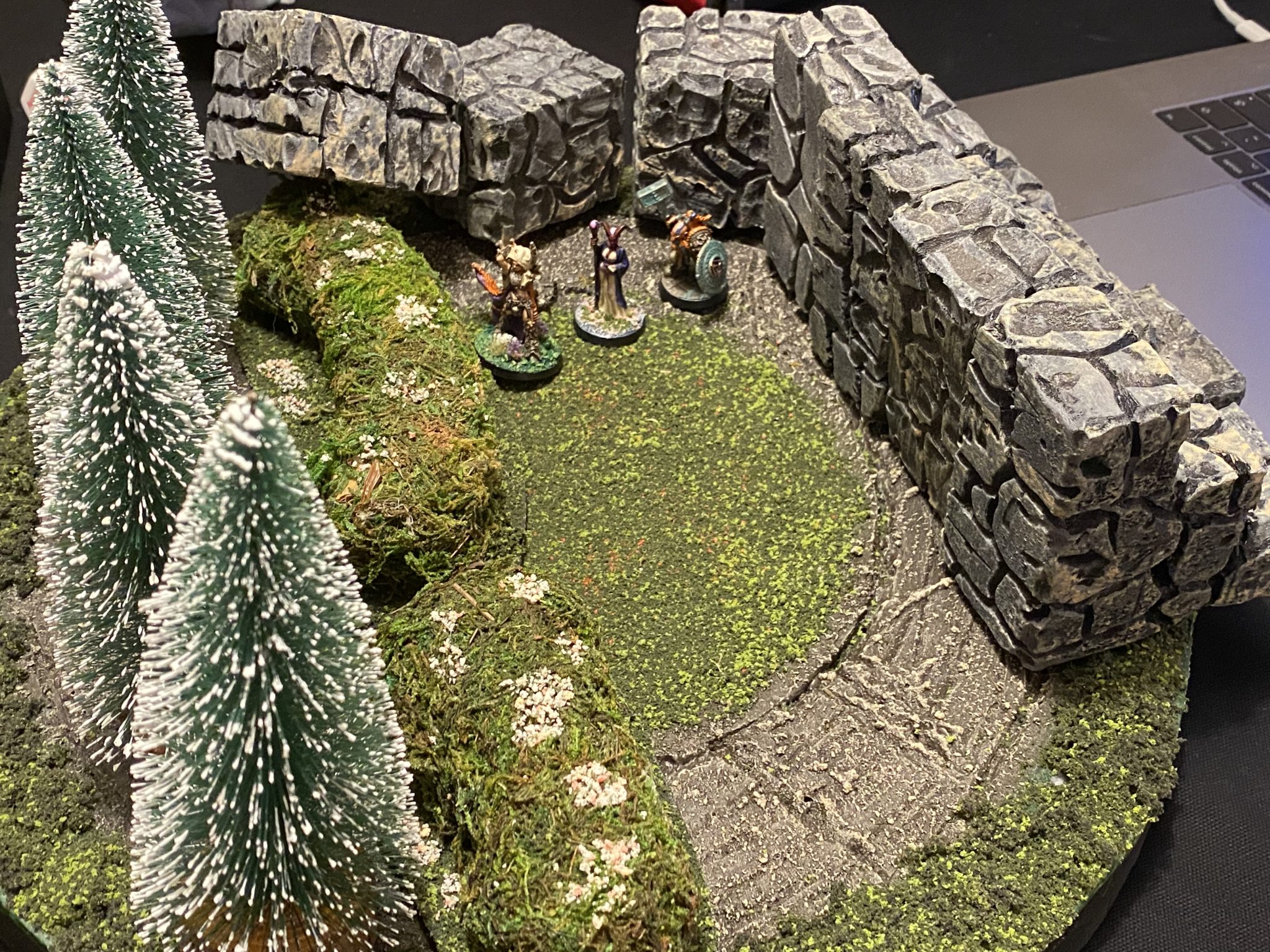 It was a smart ambush, using hidden goblins to fire arrows at the party to try and intimidate them to pay magic items for passage.

This plan was however foiled by Thorga using “Misty Steps” to appear behind Bazuk the goblin chieftain and kill him.

The rest of the goblins was taken care of by a division of Templar Luminis.

Unfortunately it turned out that the Captain of the division was Seipora’s old boyfriend who had disowned her when she got her magical powers. 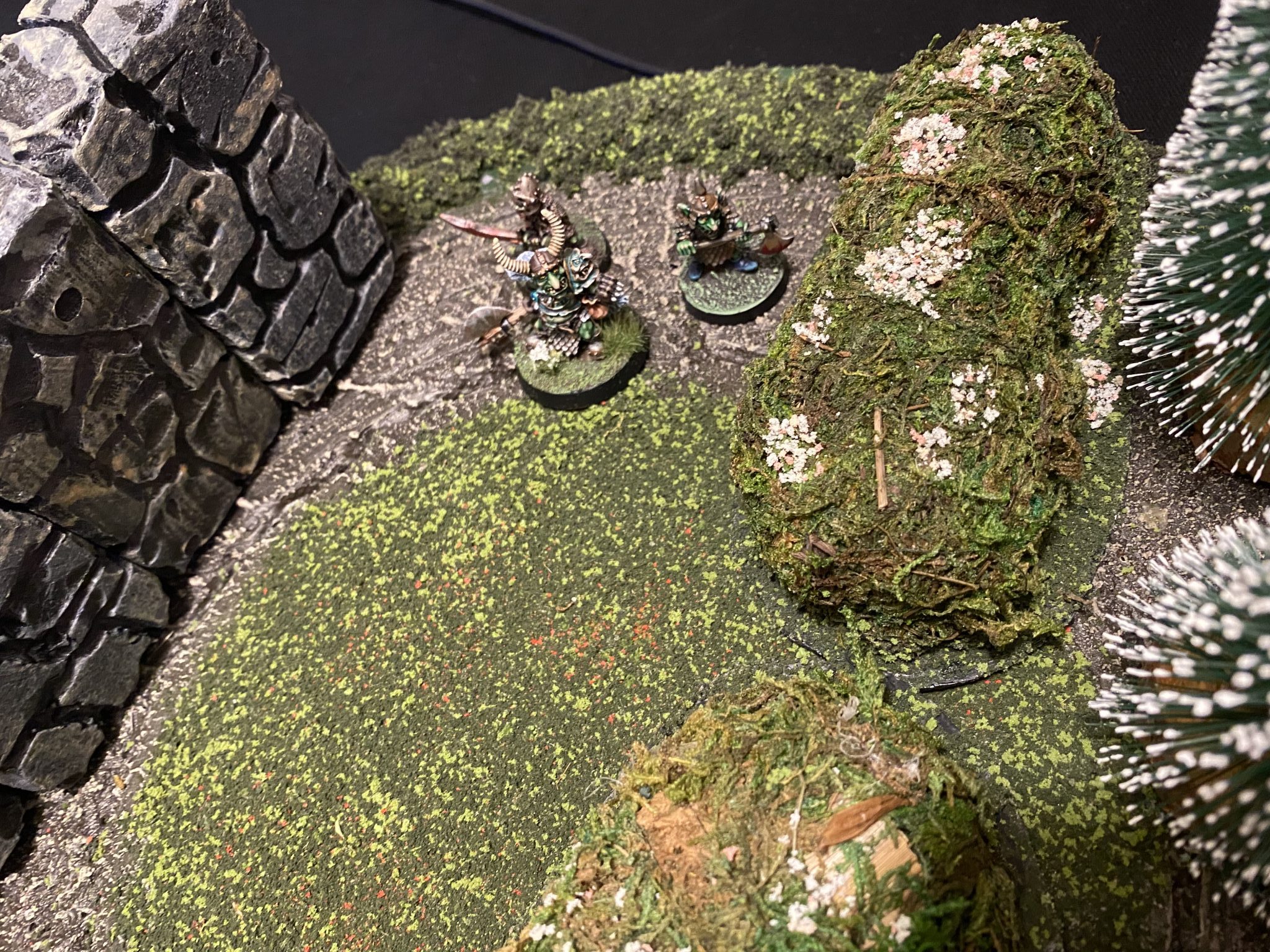 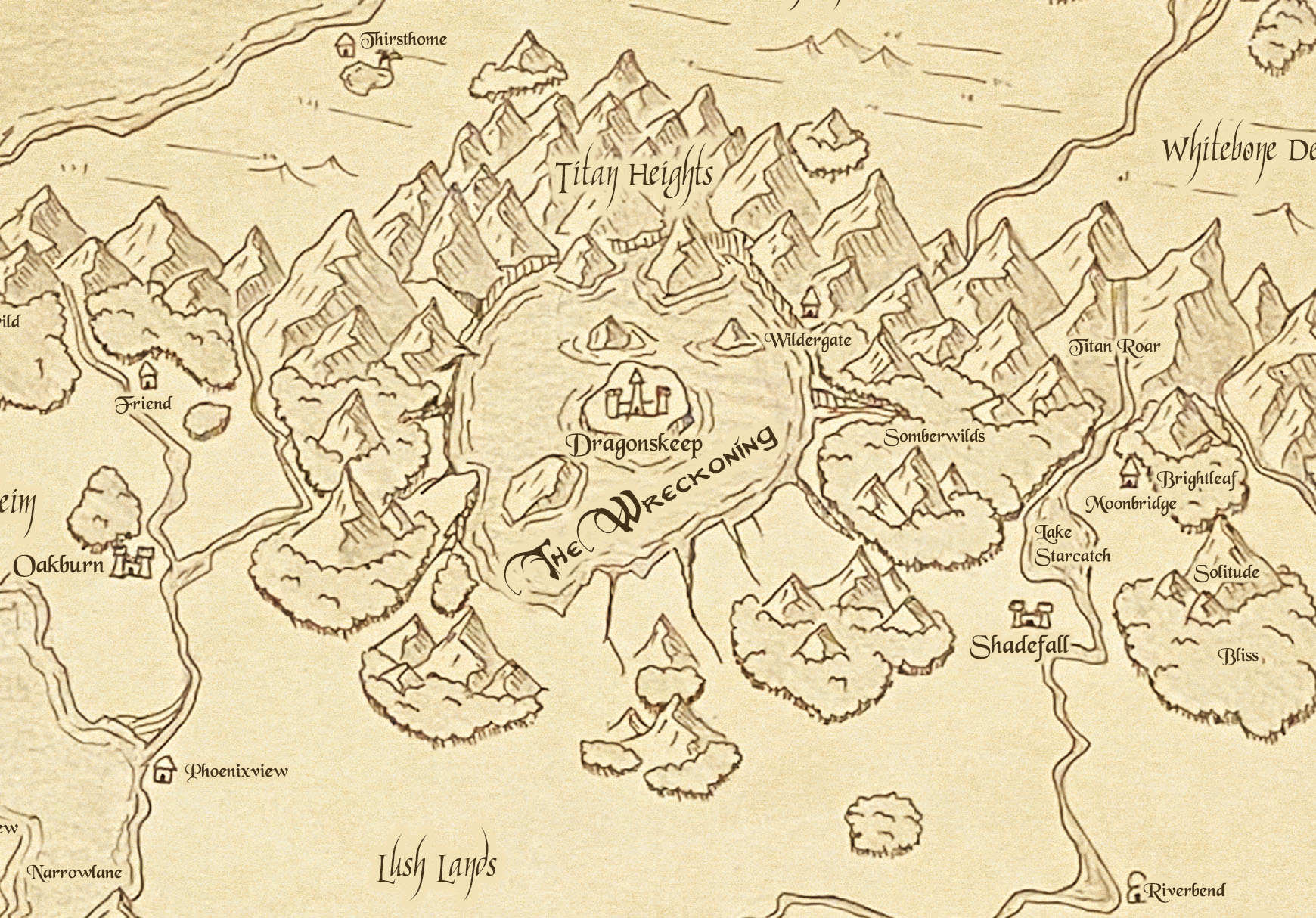 He brought the party back to Windergate as prisoners accused of being magic users (or friends thereof).

However, the prison guards were reluctant to imprison somebody without a proven crime and while this turned into a heated debate, the mayor of the town, Soyas Cindershadow, came to the party’s rescue sensing an opportunity to form allies to countbalance the growing, but uneasy alliance with the Templar Luminis.

Mayor Cindershadow promised the party to ferry them across the lake to Dragonskeep in the morning, but the party, keen to bring the information about secret second attack wave to the Highking, decided to try and get a boat from the Box of Need.

It gave them a balloon flight and faith would have it the wind took them to Dragonskeep.

The party was quickly taken before the Highking, who was desperate for any help and as they went through their inventory of magic items and gadgets, the mood lightened.

With the heroes in Dragonskeep, the Highking finally stood a chance against the imminent attack.

The heroes were left to relax and prepare as they saw fit.

Kaari, went shopping at Håkan’s Hardware Store. Håkan the Halfgiant was a retired blacksmith that with a permanently damaged arm, had opened shop selling various trinkets.

Thorga went to get his armour upgraded by the halfling smith Isaara Gentlefeet (nicknamed “Ms Not-So-Gentlefeet”), who reinforced his armour with scales from a Silver Dragon.

Thorga also asked for an upgrade to his hammer, but got sidetracked by Isaara’s charms and somehow found himself waking up in her bed the morning after.

An offer from the shadows 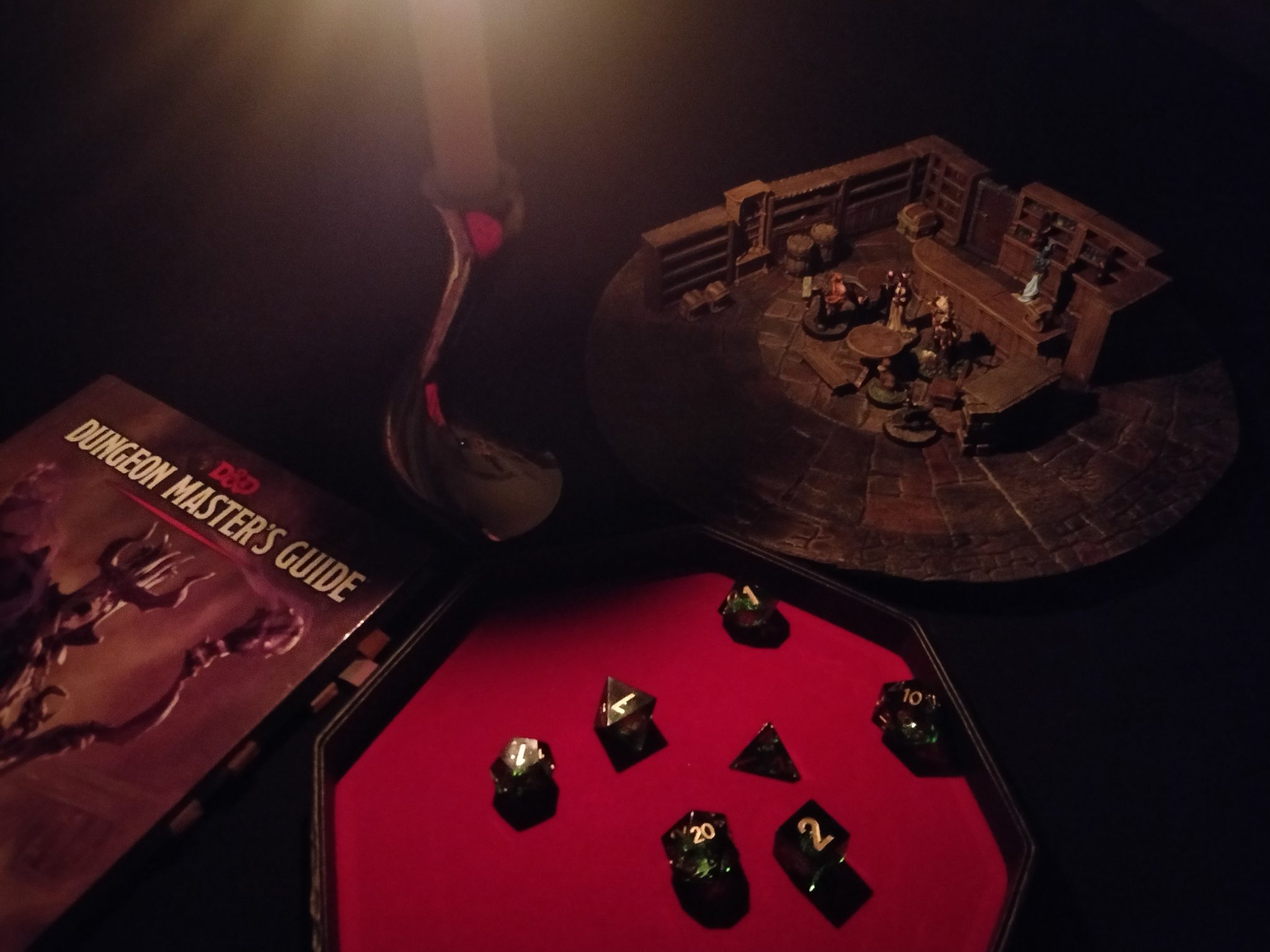 As Kaari and Thorga disappears to do shopping and .. ehh…. other things, a shadowy figure whispers in Seipora’s ear from behind her saying:

How far are you truly willing to go to save these lands?
If you are willing to go all the way, come to “The Boar and The Battleaxe” tomorrow night and ask for a drink with darkness.

As Seipora turns around, she sees nothing but ordinary people going about their business…. And a lone beggar disappearing quickly in the crowds.