“No plan of operations extends with any certainty beyond the first contact with the main hostile force.”

This was my first time ever running a war in D&D and yes, true to the quote the first casualty of the game was my planning! None of the encounters I had planned happened, but fortunately I had a range of rooms, places, NPCs and monsters on hand to back me up.

This has to be one of my all time favourite D&D sessions because of the unpredictable nature of the game.

The calm before the storm

Knowing the Drow army and their allies were only days away, our heroes relaxed and recovered their strengths within Dragonskeep.

Thorga woke up early next to Ms Gentlefeet, the Halfling Blacksmith. He had a nagging thought that attack could happen from below.

Ms Gentlefeet, tired and hungry, half-listened to Thorga’s theories until she realised there’s no food! In panic, she quickly dragged Thorga to the kitchen where they reunite with Seipora and Kaari. 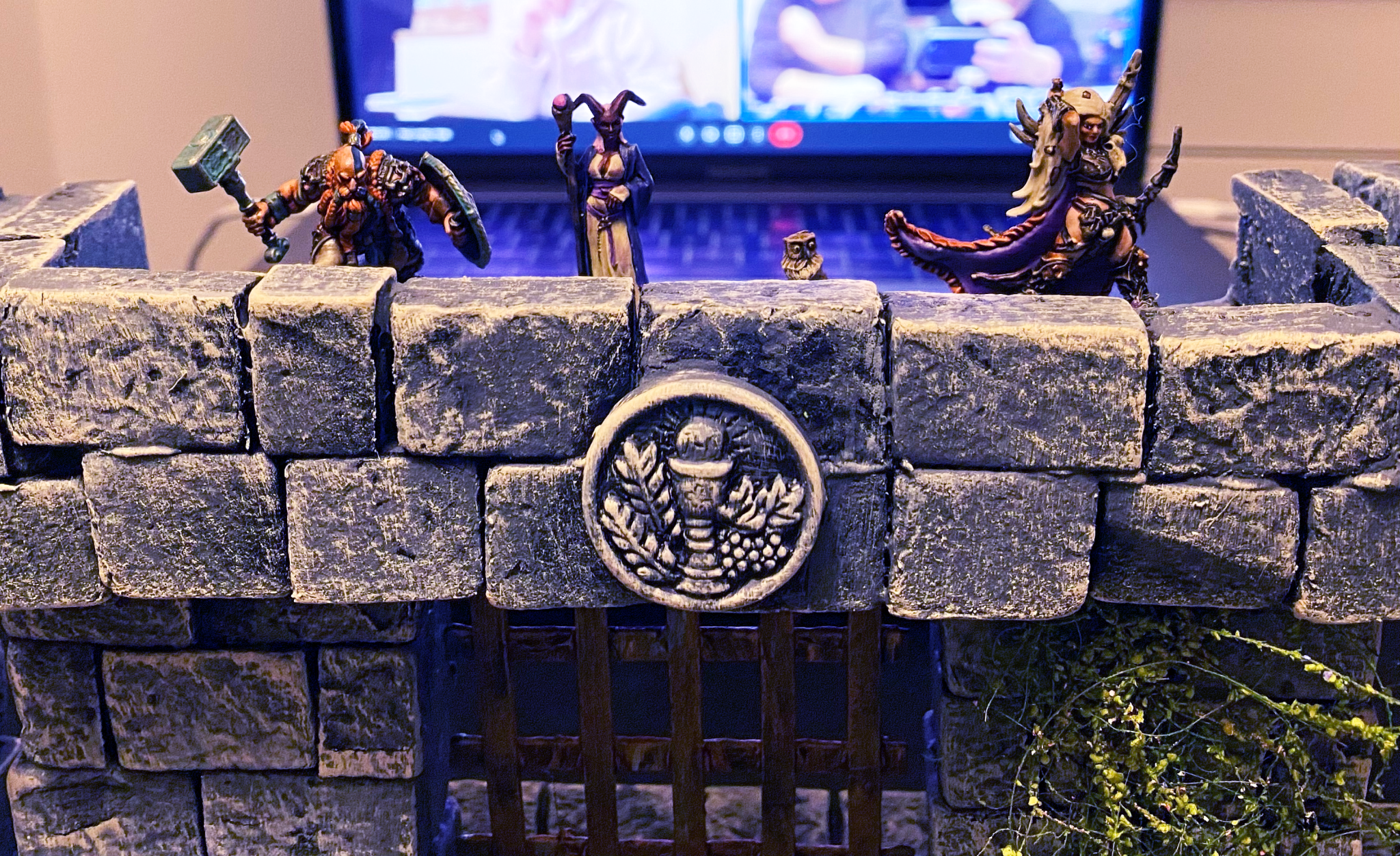 Seipora, the Tiefling Sorcerer, decided to send a mail hawk to her ex-lover, Keiros, now Captain of the Templar Luminis, asking him to come to help protect Dragonskeep. He would later that day send back an acceptance.

She then proceeded to investigate the Portable Hole, Kaari, the Ranger, and quickly realised if should could find another one, she could turn them into connected portals.

Off she went to find a resident Wizard, but on her way she found Nuenal’s Arts & craft run by the posh and snobbish Elf Nuenal, who only had badly disguised insults to offer Seipora. And while everything in the shop looked expensive, nothing seemed magical.

However, leaving the building, she realised that between the adjacent bakery and the Nuenal’s store, there would be enough space for a room, but she didn’t remember seeing a door leading that way from the Arts & craft store.

Thorga and Ms Gentlefeet went to the library where they acquired the blueprints of the castle and investigating the castle grounds with the information from the map, they found two hatchways intact leading down to what used to be the dungeons before Dragonskeep was torn down from the Titanheights mountains.

The tunnel of one was collapsed, but the other was still open even though it looked very unstable.

With the aid from the guards, they stabilised the tunnel right down to where it met the waters of the lake, but with Ms Gentlefeet rigging the reinforcements in a way where they could collapse the entire tunnel if needed.

Kaari went off to investigate options to give the Water Called Witches some means of flying in the air that would also give them protection.

She even showed the local inventor their ballon flight to see if he could replicate it, but there was not enough time.

Instead she instructed some guards to build cover high up the mountain to give the Witches a place to lay down magical artillery on the aggressors.

She also had light armour mass produced for them as well as a studded leather with dragon scales embedded for herself.

Seipora told her partners about the potentially hidden room in Nuenal’s Arts & Craft store. And together the heroes quietly moved through the streets to investigate in the cover of the night. 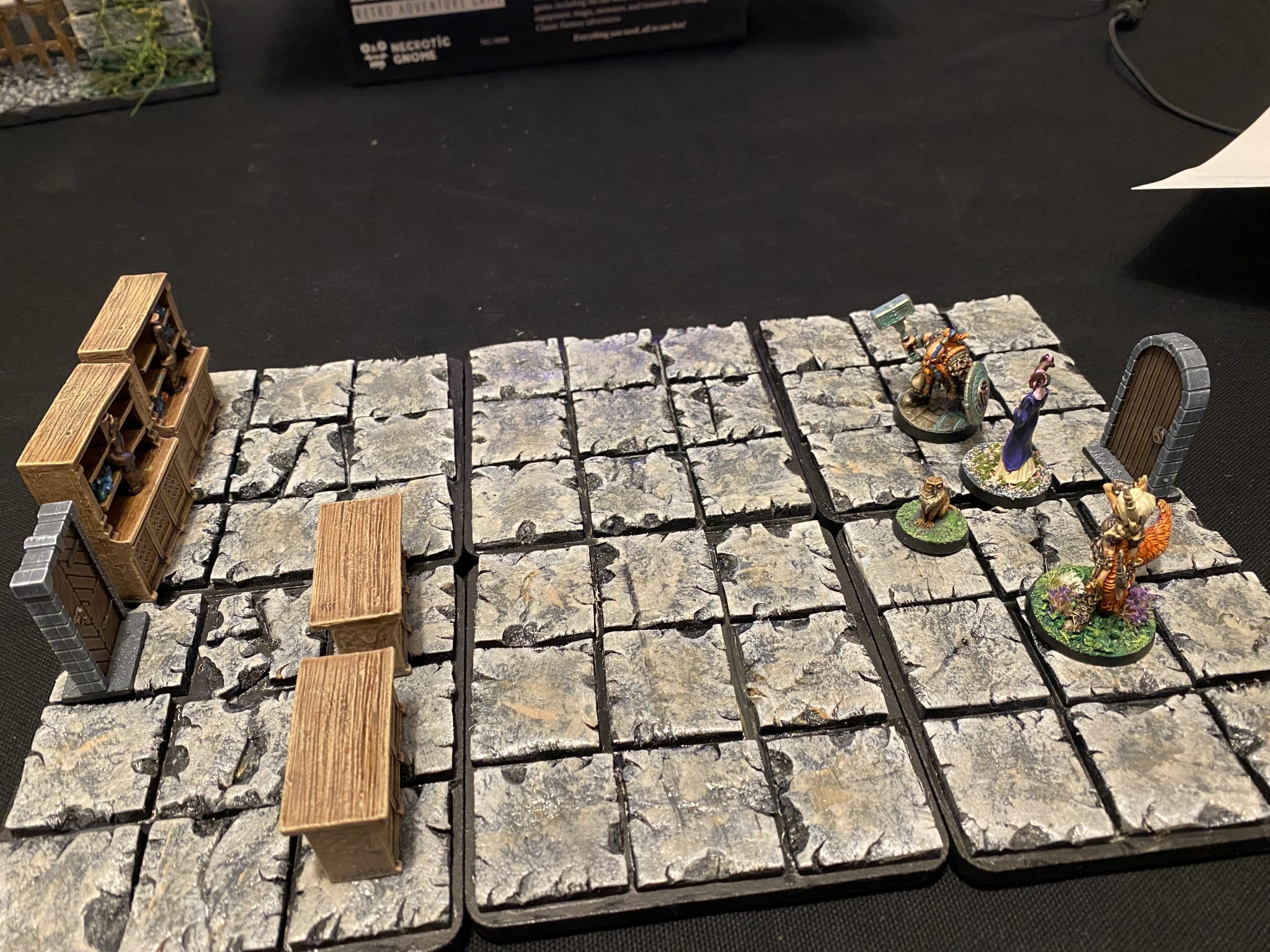 Kaari elegantly picked the lock, but as she started investigating the wall they hoped had a secret entrance, she was distracted the sparkling gems. Being obsessed with gems, she pushed a porcelain vase down and it broke with a mighty crash.

Silence… followed by a hidden door slowly opening in front of her and out came an Oni guardian.

While the Oni was mighty and made use of his magical abilities, he was no match for the heroes. 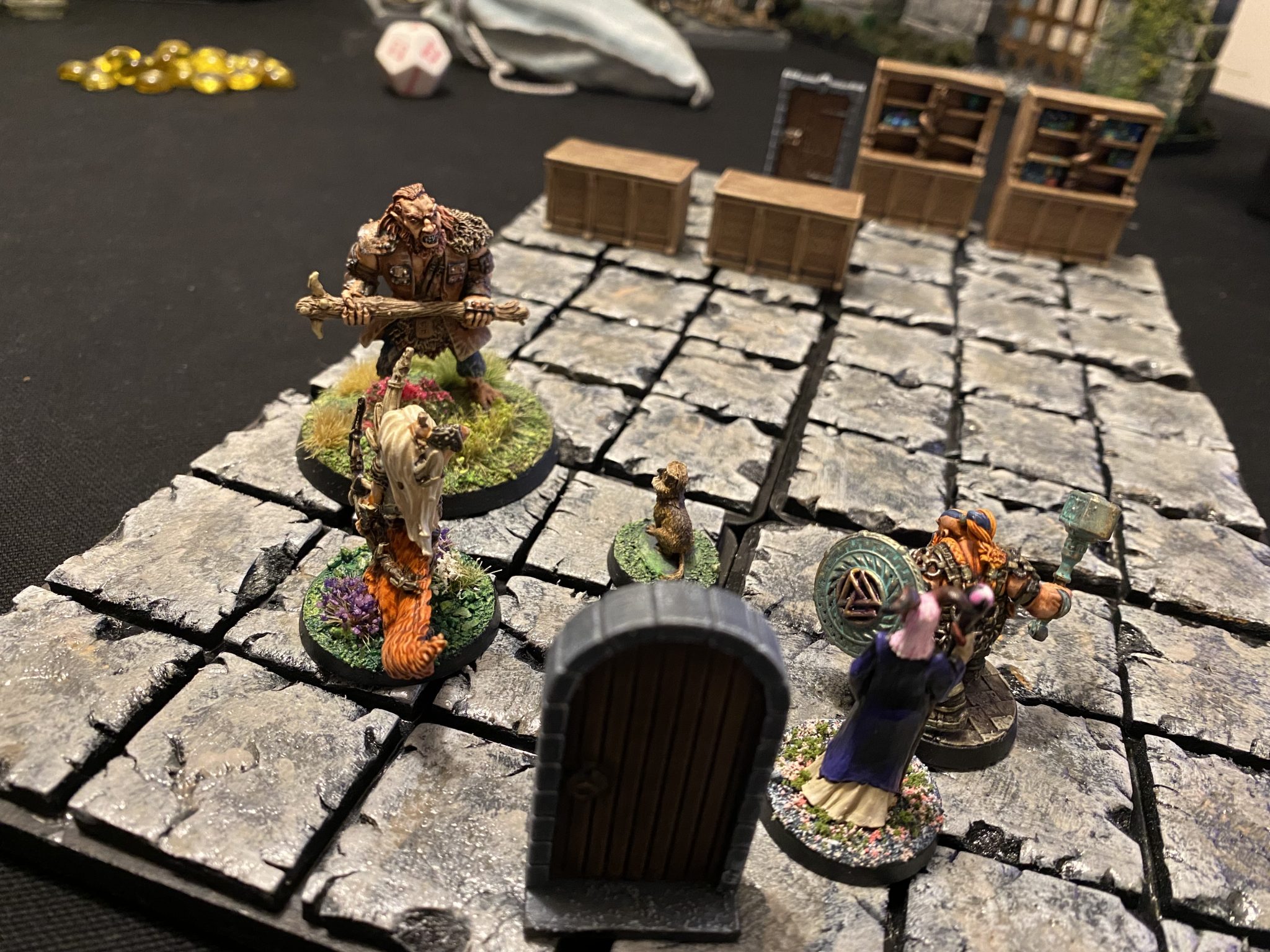 But as he fell, the fight voke up Nuenal who was sleeping upstairs.

The heroes dragged the hulking dead body though the hidden door and just as Nuenal stepped into view, Seipora managed to close the door. Phew!

Inside, secret room was sparsely finished with an elegant desk with three chairs and a single cupboard behind. 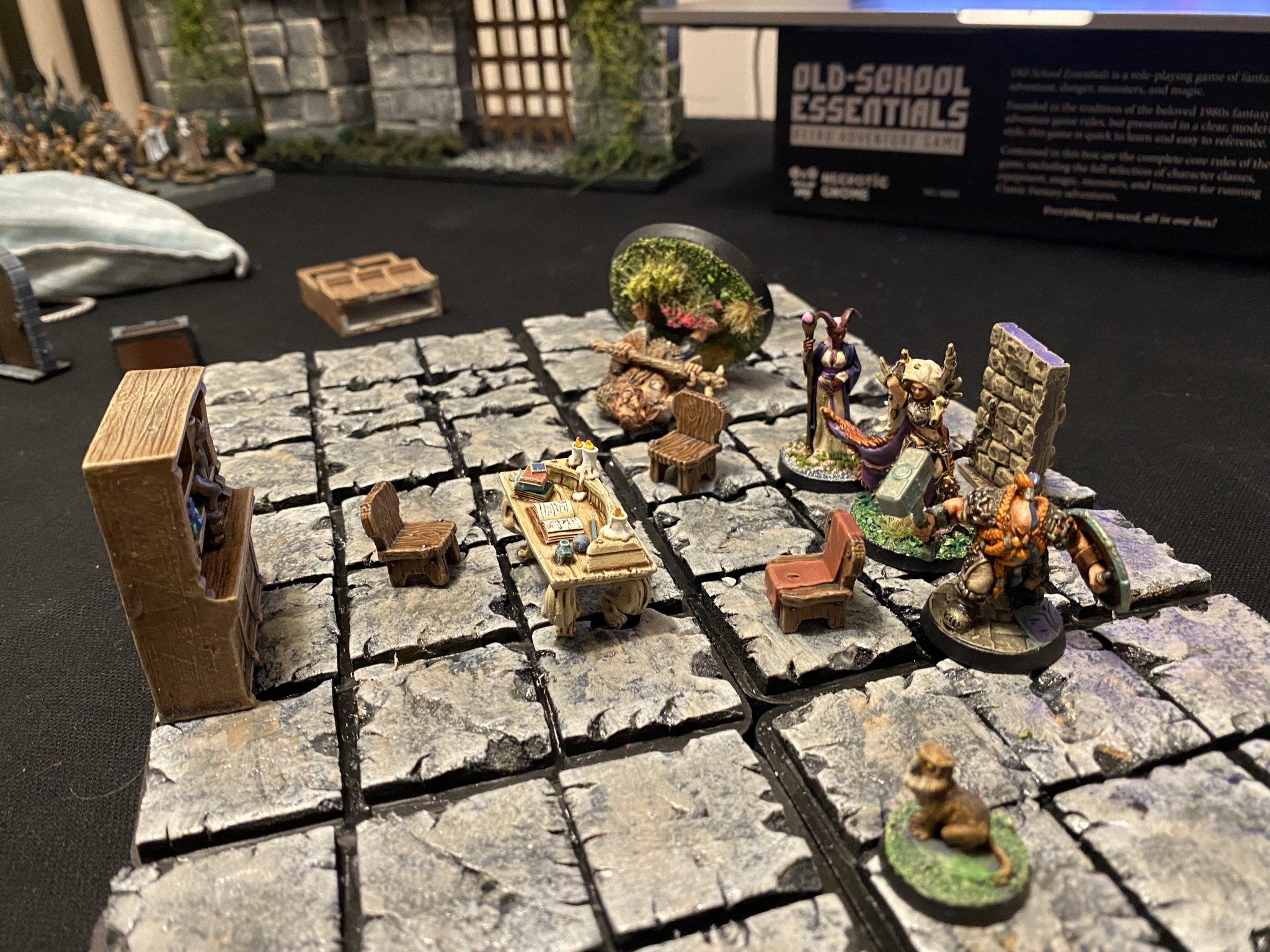 Seipora looked through the items on the shelves and while she quickly realised it was an illusion, she didn’t know how to remove it.

Suddenly she had a brilliant idea! (which ofcourse earned Anna Maria an Inspiration).

Seipora decided to cast Blink taking her temporarily into the ethereal plane. As the illusion was in the material plane, it was no longer in her way and she saw three objects:

She quickly grabbed the mirrors before reappearing in the material plane to the sound of an alarm and as the heroes fled, the cupboard exploded in flame and was destroyed.

Back in their accommodation Seipora realised the mirrors each had the soul of a Sphinx and facing each other they would create a barrier of riddles that would trap people until they answered the riddles.. and if they couldn’t, they would be trapped there forever.

The foe comes within visual range

The Drow army arrived from the West, reduced to 3/4 of their original strength by Volterax’s attack.

And for the first time, the heroes also lay eyes on the army of Dark Dwarves coming from the South.

Final preparations were made and our heroes went to bed knackered. 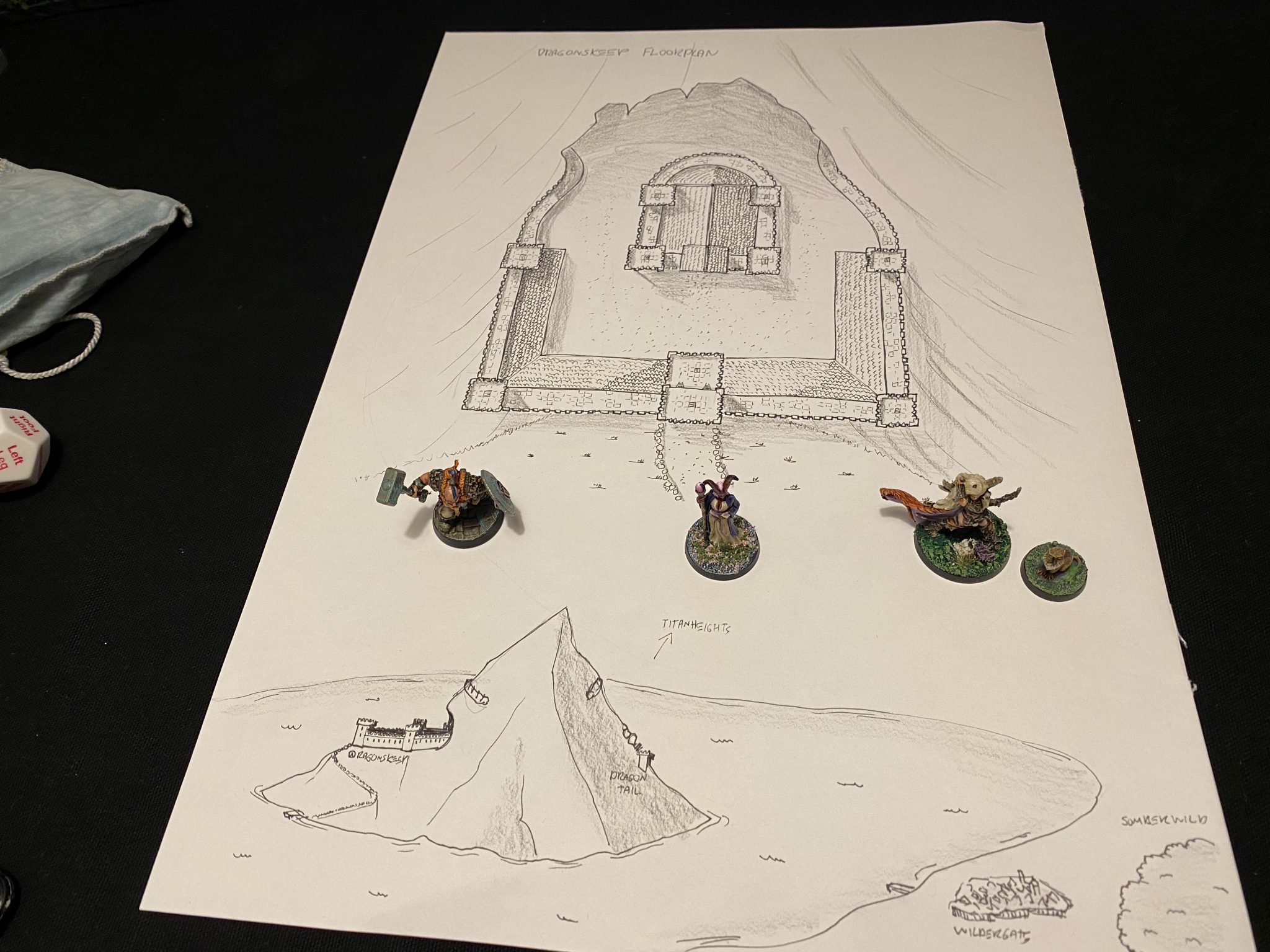 The heroes woke up to a lot of commotion as the defenders of the castle have all woken up to find the protective lake surrounding Dragonskeep had magically been frozen to ice over night.

A bit of good news was that it had enabled Captain Keiros and a group of Templar Luminis to make it to the Keep before the attack.

The first salvo and movements

Suddenly a huge fleshy orb with a huge central eye and tentables with eyes came hovering over the castle ground and fired rays of all sorts at the defenders killing guards left and right.

But the Beholder’s attacks on the heroes was largely unsuccessful and it was chased away by guards regrouping and concentrating their arrows on it.

1/3 of the Drow started crossing the ice from the West.

The Dark Dwarves was reading a hellish looking cannon and the edge of the lake to the south and they also sent a 50 strong phalanx, with a mighty Stone Golem in the centre, towards the gate.

First response from the Defenders

Seipora revealed her Scroll of Meteor Strike and called down calamity on the Drow on the ice. Even with the panicked attempt of dispelling the mighty ancient scroll, they never stood a chance against the rain of rocks.

As last rocks fell, the 200 Water Called Witches on the 100 Griffons arrived from the East.

Now was the time to bring out all the aces and Kaari pulled forth the horn Snærgjallar and blew it. As the deep sound echoed in the mountains, the silhouette of a force of Frost Giants appeared coming down the mountain following Kaari’s orders.

As the Stone Golem phalanx reached the gate and started pounding on its strong wooden frame and soon the sturdy door gave in to the hard rocky fists of the Golem.

Håkan the Halfgiant, who was guarding the gate, pulled the lever to let the fall gate drop, but the Stone Golem caught it and started forcing the cast iron gate up letting Dark Dwarves pour in

To make matters worse, the Hellish Cannon fired a mighty ball of lava that all but destroyed the central building within the castle killing dozens.

“Enough of this nonsense!”, shouted Ms Gentlefeet. “I’m going after that mighty ol’ cannon over there. Who’s with me?” and without waiting for an answer she exited the castle through a small hidden door.

“We can’t hold them”, shouted Captain Keiros while fending off Dark Dwarves trying to stop Håkan from pushing the Stone Golem out again to let the gate drop.

What will our heroes do next time?