Having befriended the Kolbolds and their ruler, the young dragon Desero the Dazzling, the party took a well earned rest in the Sanguine Well oasis.

The following day, the party tried to convince Desero to help them in the fast approaching battle with the Drow, but Desero explained that such an act needed to be sanctioned by the Head of the Blue Dragon Order, Volterax Shocktail.

Desero took the party to the entrance to the lair where Volterax lay asleep. Seipora grabbed the chance to ride Desero for some girl-to-girl bonding time, while Kaari and Thorga rode lizard mounds provided by the Kobolds.

As the traveling group reached the edge of a huge square hole in the desert (the entrance to Volterax’ lair), Desero lay down for a nap at the edge, leaving our heroes to find their way in.

Down at the bottom of the square hole, in the middle of the floor, the party found a 5 sided Obelisk with 5 glowing markings: 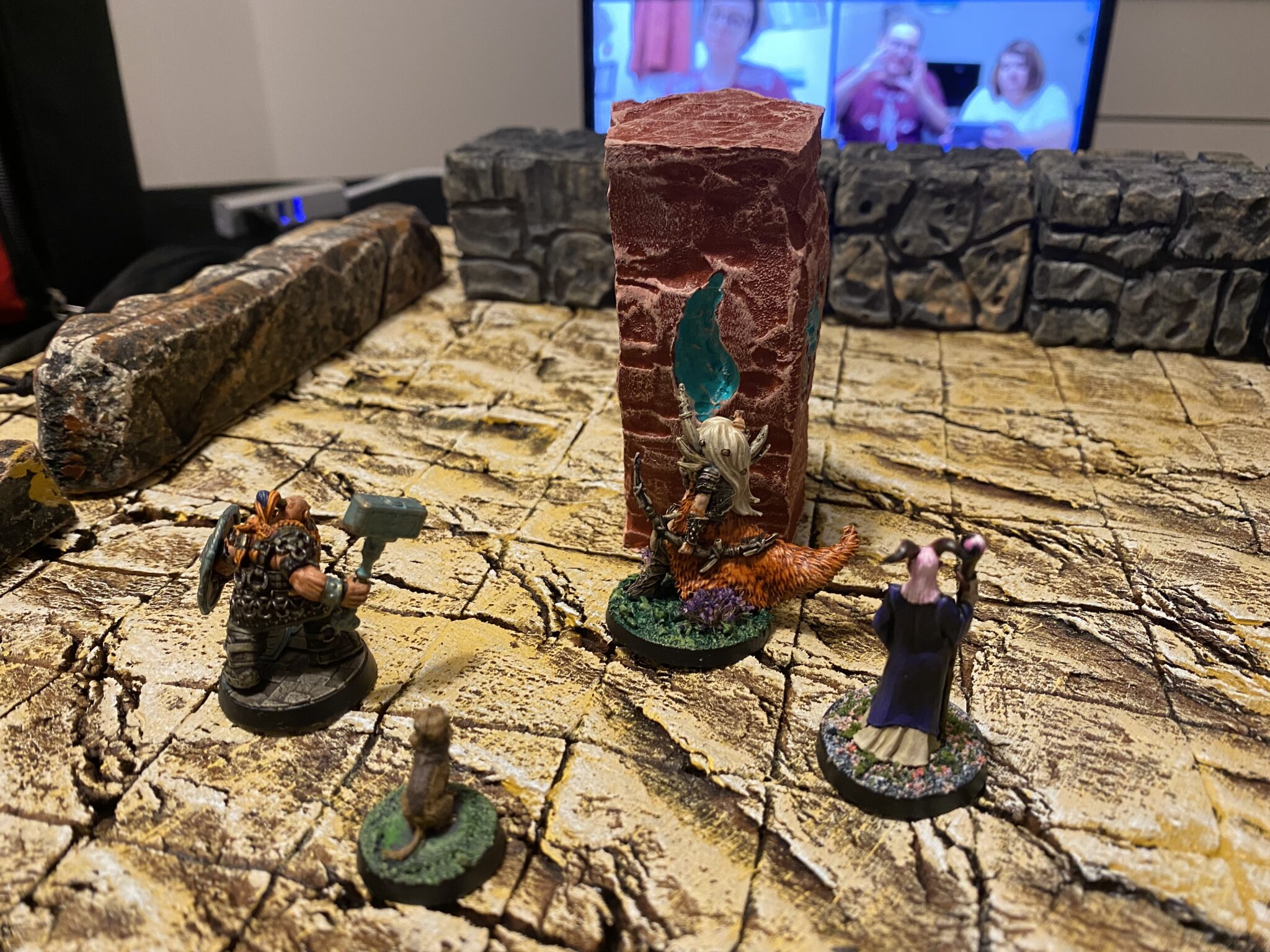 To call Volterax, the party had to activate the right one and they started by activating fire resulting in a flame elemental appearing and attacking them. 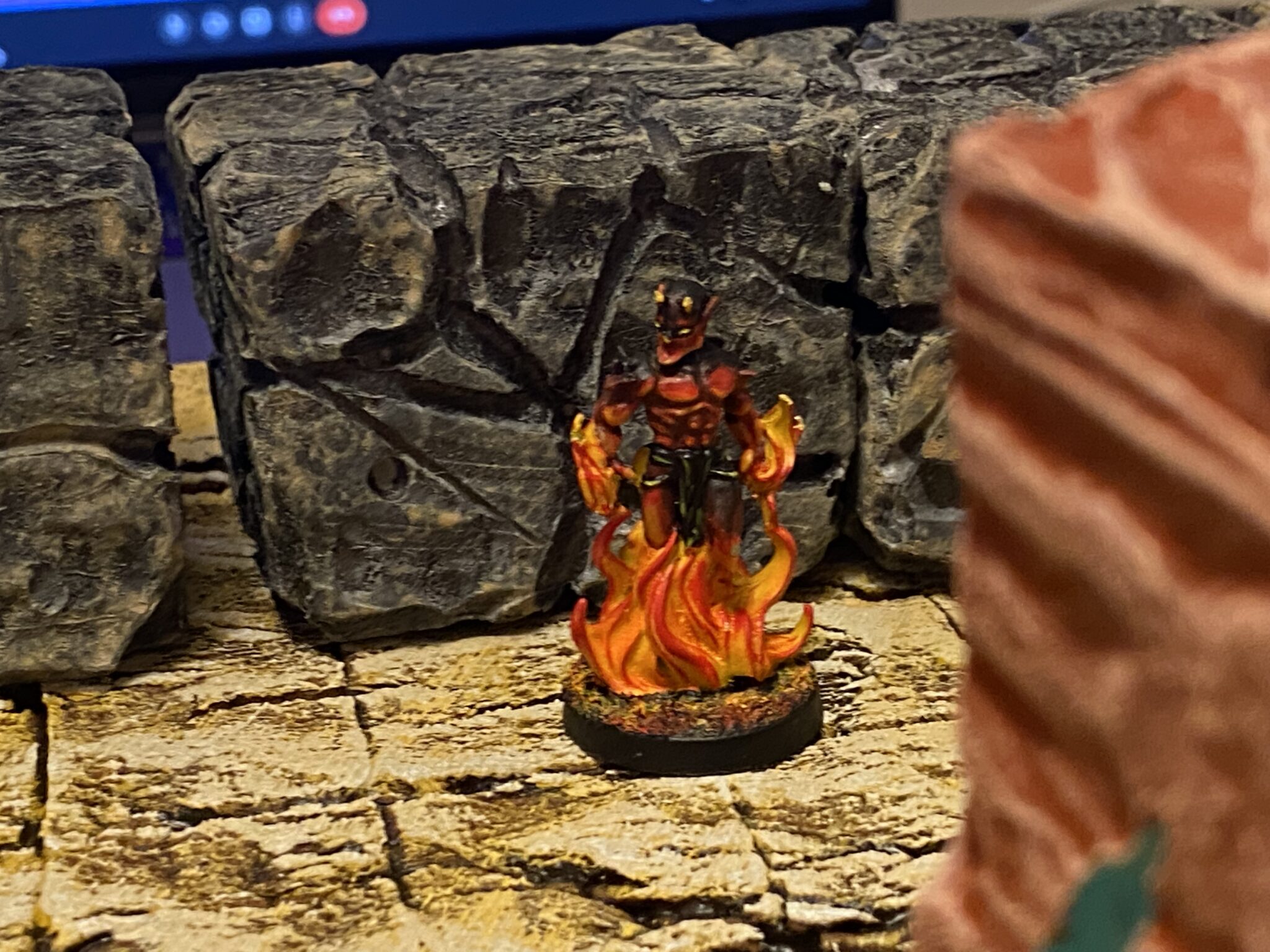 To add to the situation, the obelisk also started sinking into the sand rather quickly (I rolled a 1 on a D4 meaning the obelisk would disappear in 1 turn).

Kaari the Ranger suddenly recalled that Blue Dragons breathe lightning (Good roll on Nature check), so the party managed to strike a flint on the obelisk activating the right symbol before the obelisk disappeared down in the sand.

And up came Volterax Shocktail, a much older and larger Blue Dragon with a menacing attitude causing fear in all heroes. Indeed, Seipora our Sorcerer was hit with such a shock, she fainted (Rolled a 1 on fear check). 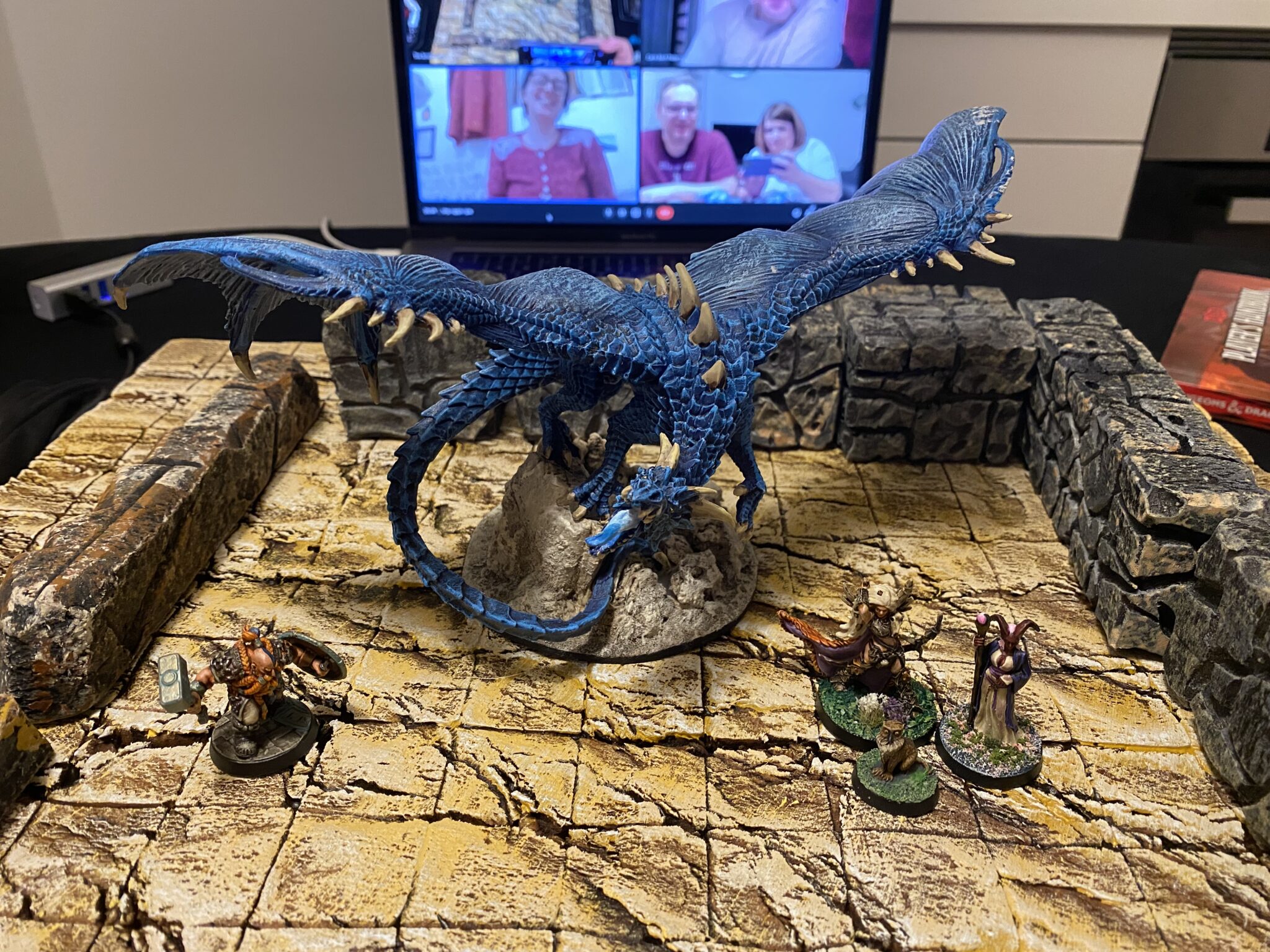 Through some discussions, Volterax offered the party 1 wish and they asked Volterax to fly them to Dragonskeep and on the way cause some damage to the Drow army heading in the same direction on foot.

As they flew over the Drow army, Volterax nosedived almost to the ground before leveling again to deliver her devastating lightning breath that in an instant vapourised 10-15% of the Drow army, before she ascended again into the clouds flying up up alongside the side of the mountain range Titanheights.

A hard landing on Titanheights

However, at the top of the mountain range, the heroes found out the hard way that Chromatic Dragons only serve themselves and Volterax rolled over forcing Kaari and Thorga to fall from her back down onto the mountain top to the sound of her evil laughter.

Desero, not entirely happy with the change, was commanded to drop Seipora as well, before the two Blue Dragons flew away, leaving the party stranded at the top of Titanheights.

Freezing, the party started to panic, but Kaari, a Ranger who grew up in these mountains, quickly found shelter in an abandoned bear cave and Thorga, with his Dwarven stonecrafty skills, rigged a hole so the smoke from the fire would not be seen from the entrance.

In the process of finding the cave, Kaari had spotted some days old Goblin foot prints, some wolf paw prints and some more recent large foot prints she couldn’t identify.

Exhausted, the party went to sleep. Kaari took first watch and heard something outside in the forest. As she scouted she saw a big silhouette quickly vanishing.

Thorga took next shift and hear sounds everywhere, not being used to the forest, but although paranoia almost overtook him, nothing happened on his shift.

Seipora’s heard nothing on her shift and even fell asleep…

Hunt for the kidnapper

Tracking big foot prints leading away from the cave was no easy task as the quarry had made efforts to cover its tracks. An ordinary person would have lost the trail, but Kaari was not only a Ranger, but a Ranger familiar with these mountains so for her the trail stayed true all the way to a large ice cave.

Meanwhile Seipora woke up hanging upside-down with her feet iced to the ceiling of the icy cave. 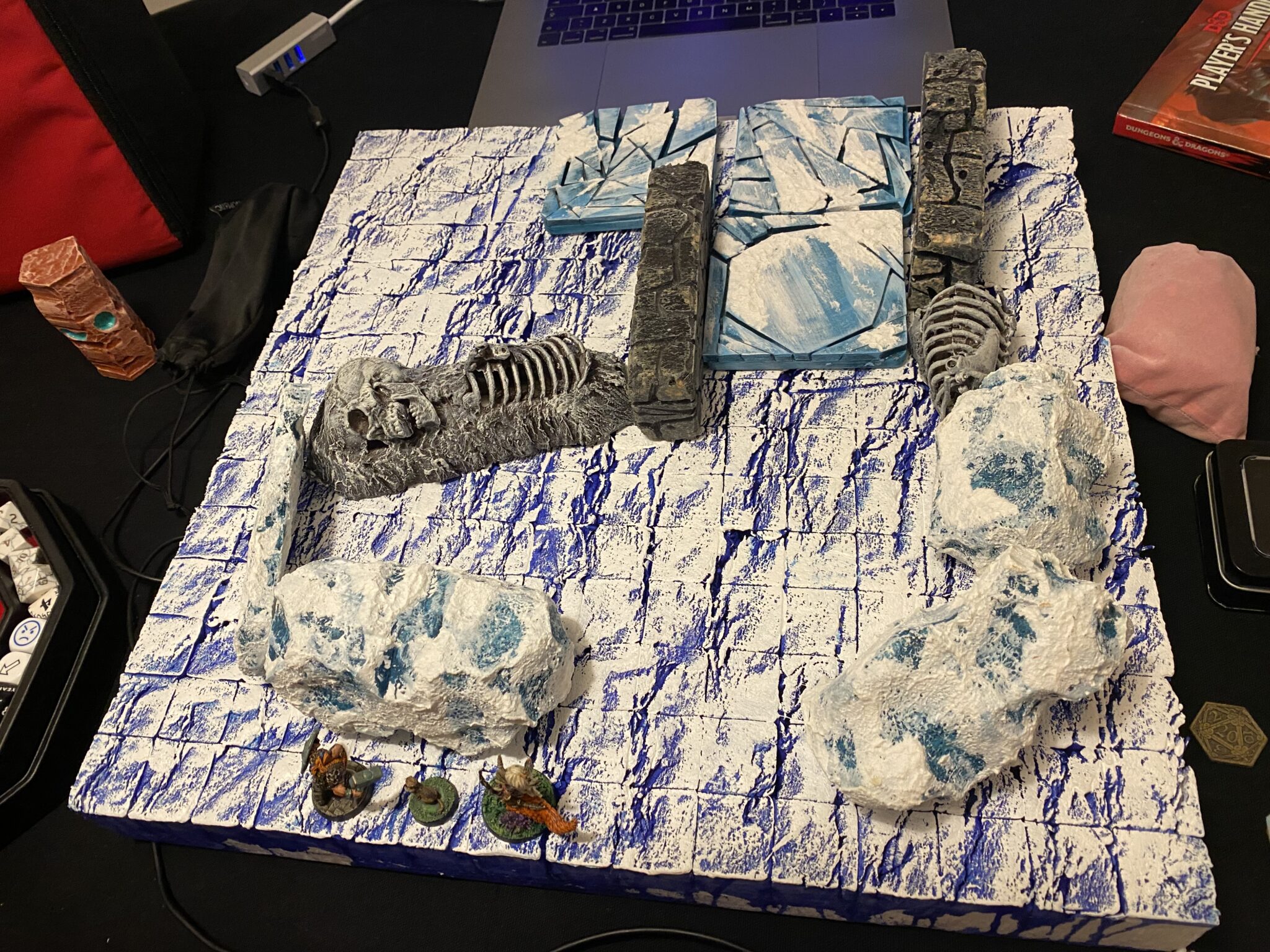 Kaari and Thorga ventured inside the cave and to their surprise they found a man-made hall way leading deeper inside the mountain side. They investigated the hallway and found the floor was ice covering a nasty spiked pit trap.

Seipora used her Wild Magic the shape a fine thin line of fire to cut herself free silently. She dropped down and landed on the ground in front of an Abominable Yeti, but her Wild Magic protected her by causing Confusion on the Yeti, who wildly started hitting imaginary foes around it leaving Seipora to escape out the very same hallway Kaari and Thorga had found the other end of. 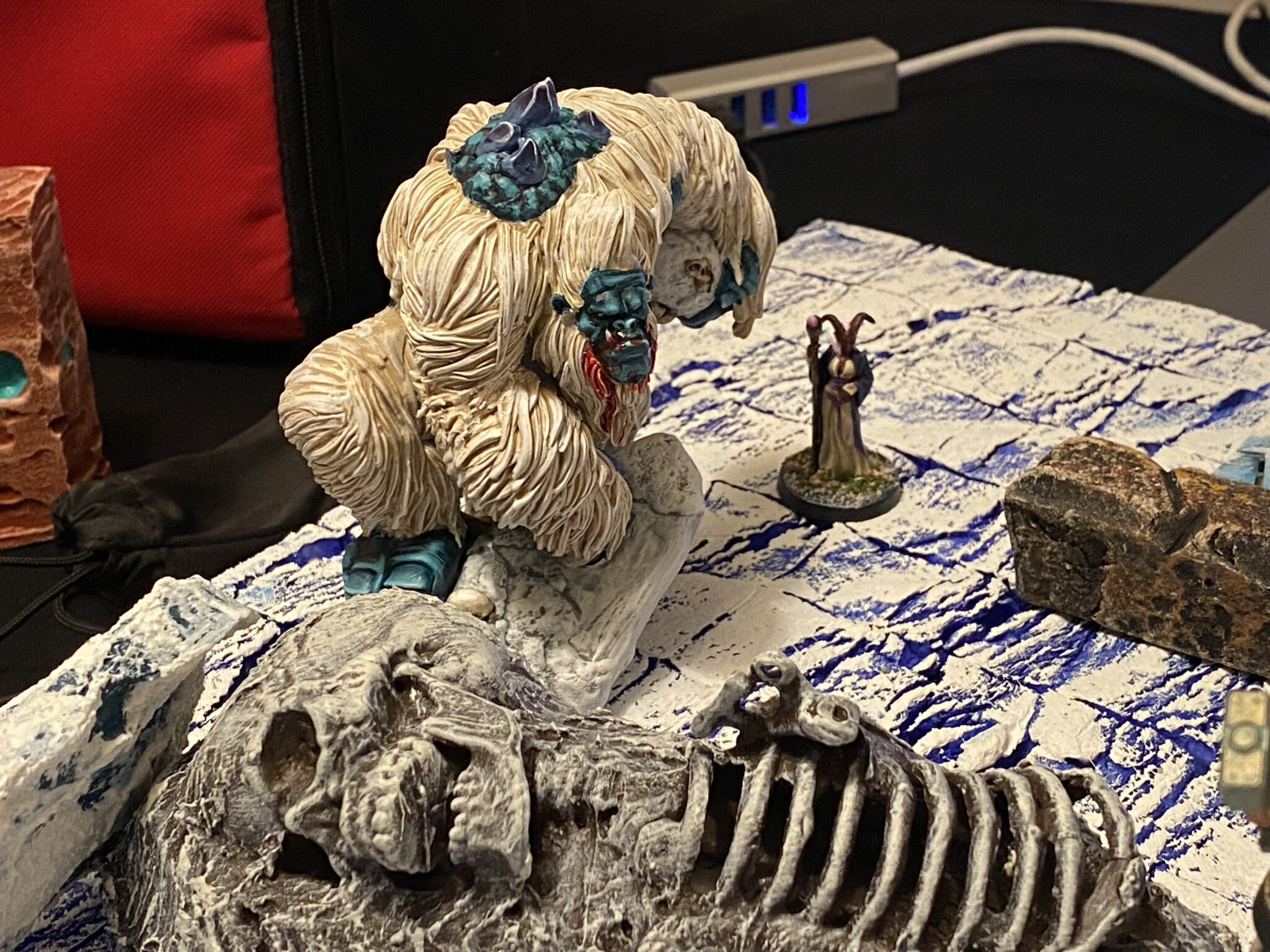 Unfortunately, Seipora in a rush to flee the Yeti, ran on to the icy surface and fell through down on the spikes.

Kaari and Thorga hearing Seipora’s screams, found a ledge to climb across. Unfortunately the Yeti heard it too and a fight broke out between our heroes and the deadly foe. 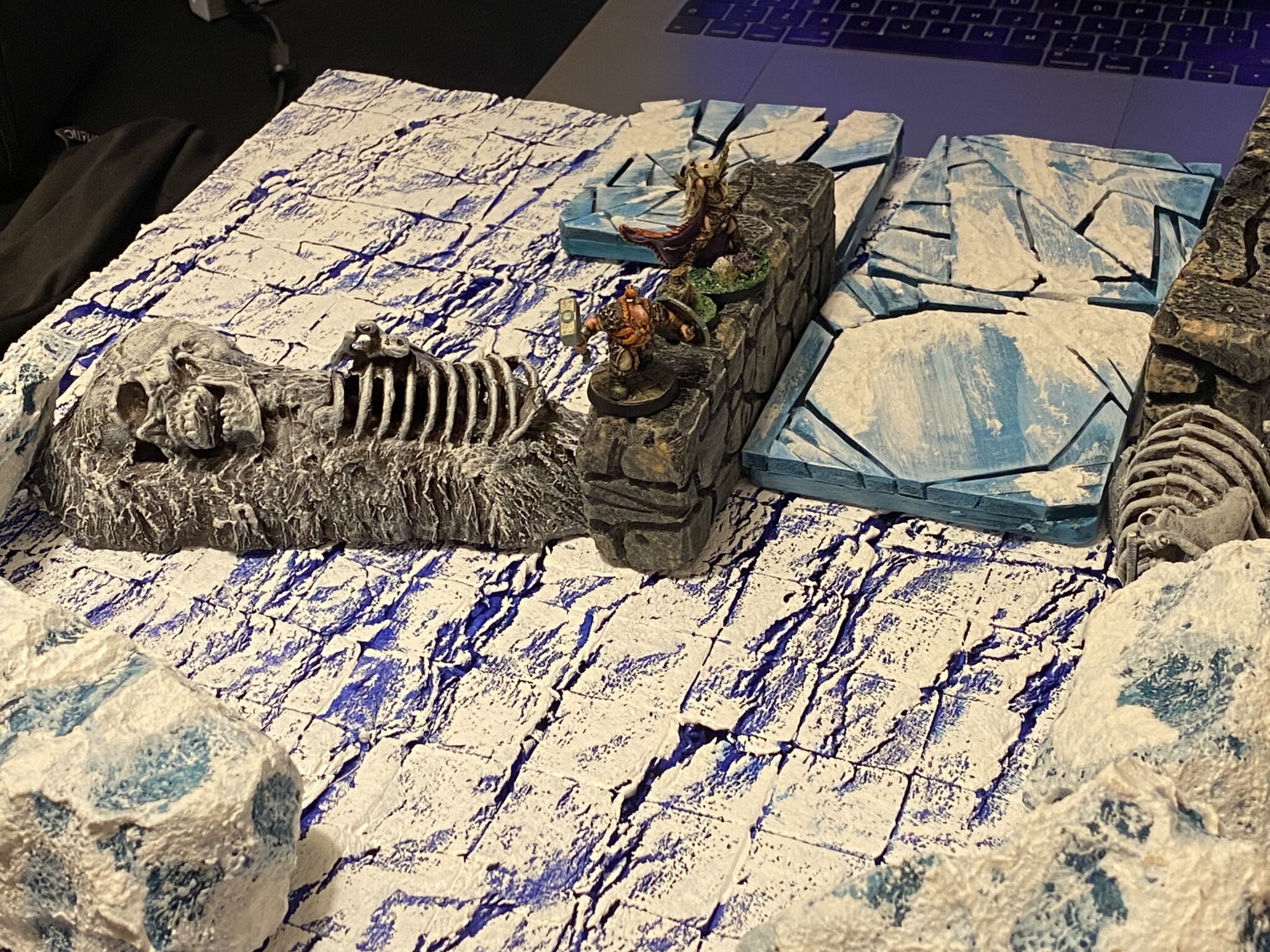 As the heroes were gaining the upper hand, the Yeti used it’s Cold Breath hitting all heroes and killing Seipora!

(DM note, I realised I never had the conversation about Death Saves with the players, so while I would have preferred not to use them, given the situation, I decided to use them and we have since discussed this and we are keeping Death Saves)

Luckily Kaari had trained her Owlbear Cub to deliver the potion of healing in the small barrel hanging from its neck, so off Polly went and Seipora felt the refreshing potion down her throat as she rose awakened. 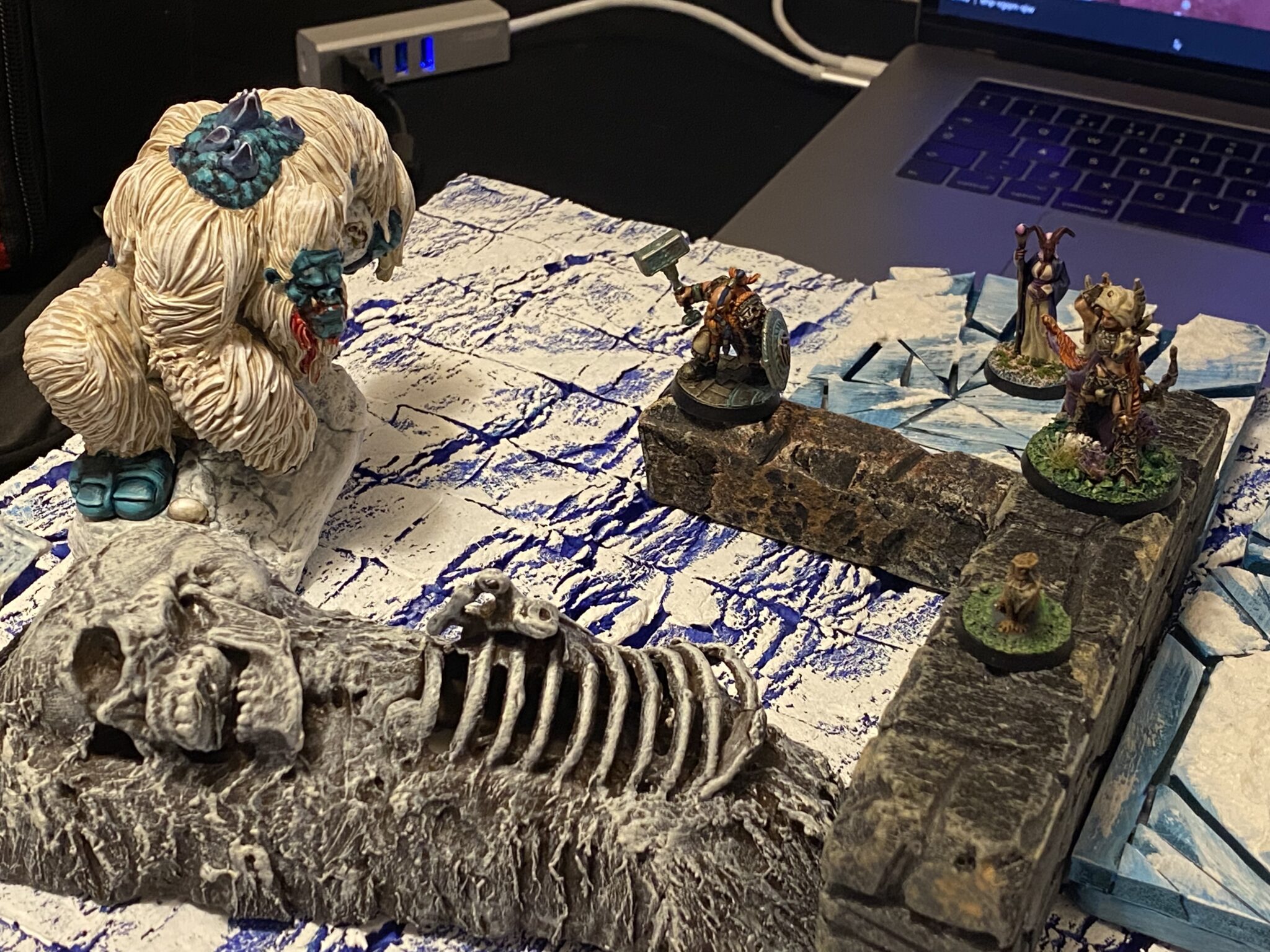 She shot a Firebolt at the Yeti, who panicked and ran for the exit, wounded by Thorga’s hammer and the arrows from Kaari’s bow, but still alive to flee.

Will our heroes chase the Yeti or will they stay and investigate the ancient ruin making up part of the Yeti’s cave? 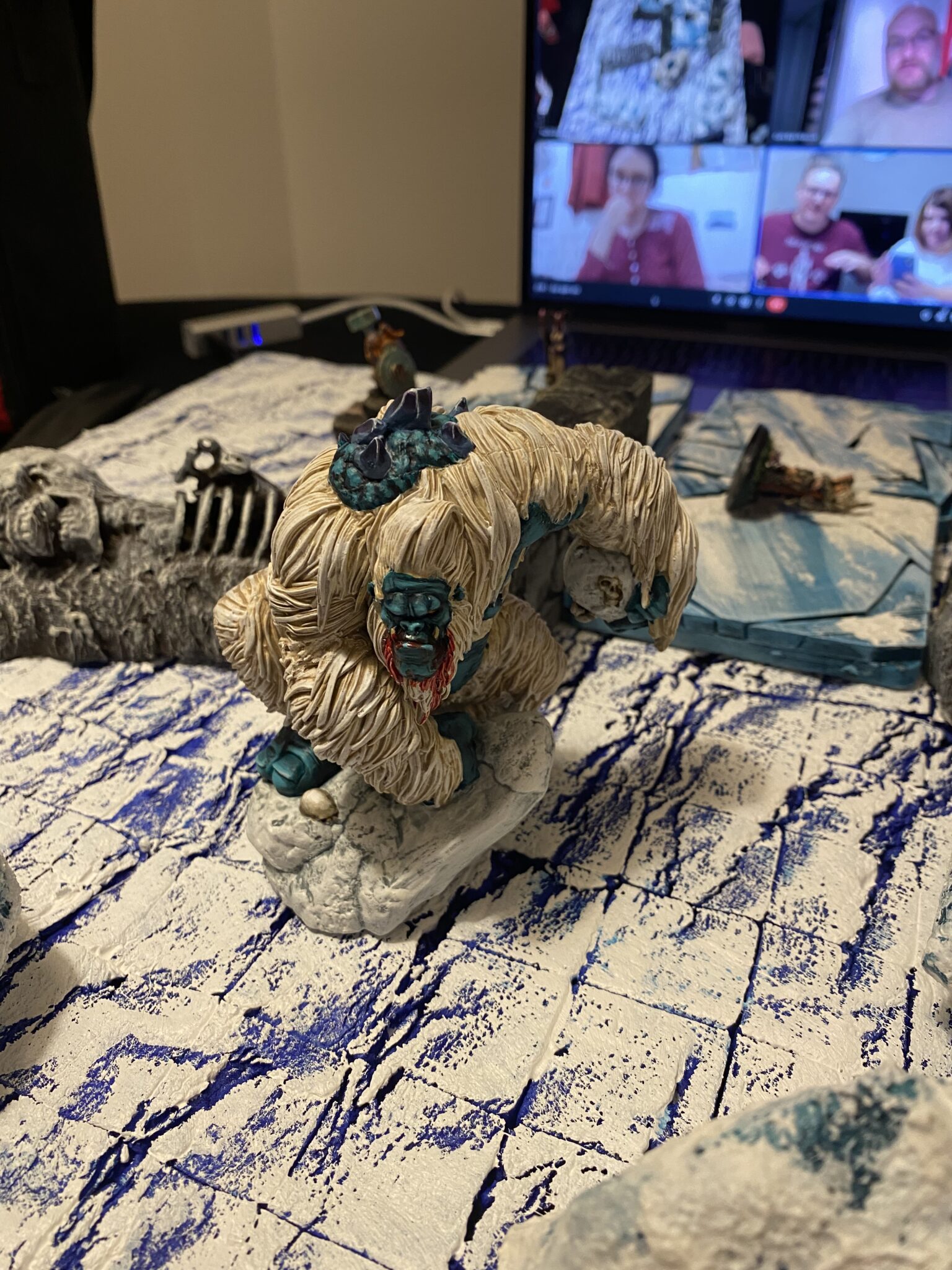