DM notes: Although I used to play tabletop wargames like Warhammer and Vor the Maelstrom, I have never run mass combat like a castle siege before in Dungeons & Dragons and Professor Dungeon Master’s video on How to Run Mass Combat has provided a fantastic formula to follow.

Looking over the situation, the heroes had to choose between helping hold the gate against the mighty Stone Golem brought by the Dark Dwarf phlanax, or follow the Halfling Blacksmith Ms. Gentlefeet, who was sneaking out a secret door to tackle the mighty hellish cannon that had all but destroyed the central building of Dragonskeep.

Håkan the Halfgiant holding the gate had received reinforcement in the form of Seipora’s ex-lover, Captain Keiros and a division of Templar Luminis.

But still the heroes decided to split the party and let Seipora follow Ms Gentlefeet, but with the aim to acquire the cannon from the enemy and use it against them rather than sabotage it.

The Ranger Kaari and the Dwarven Paladin Thorga stayed behind to help at the gate just as the Stone Golem broken the mighty wooden door.

The summoned Frost Giants were directed at the Drow army stuck on the West bank of the lake due to the Meteor Strike having previously crushed the ice between them and Dragonskeep.

And the newly arrived Water Called Witches, riding the Griffons, attacked the Dark Dwarves main force as a distraction from Seipora and Ms Gentlefeet’s mission to take the cannon.

DM notes, it meant I would have to run two encounters simultaneously. I have run multiple encounters before and I think it is great fun. 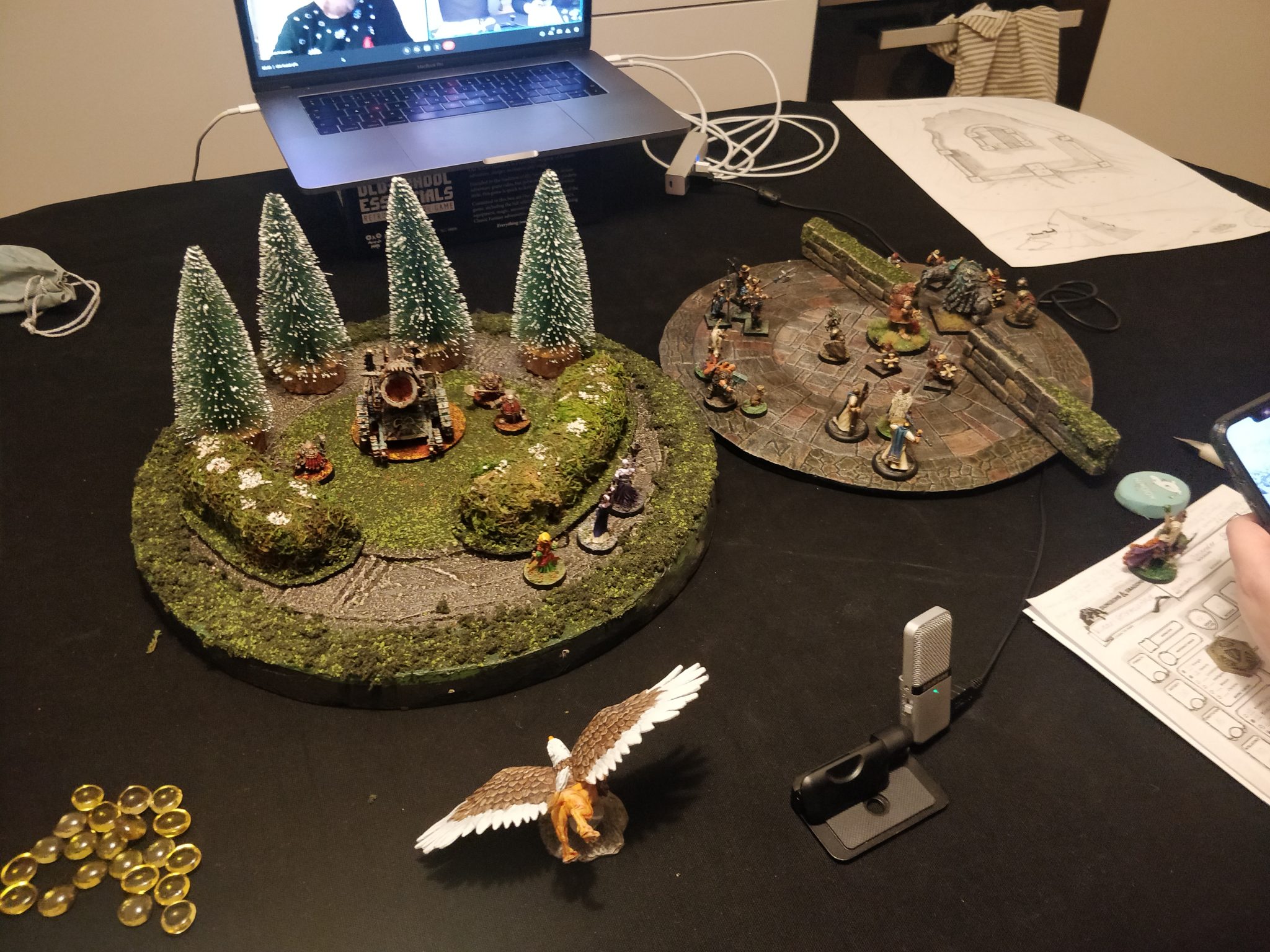 The clash at the gate 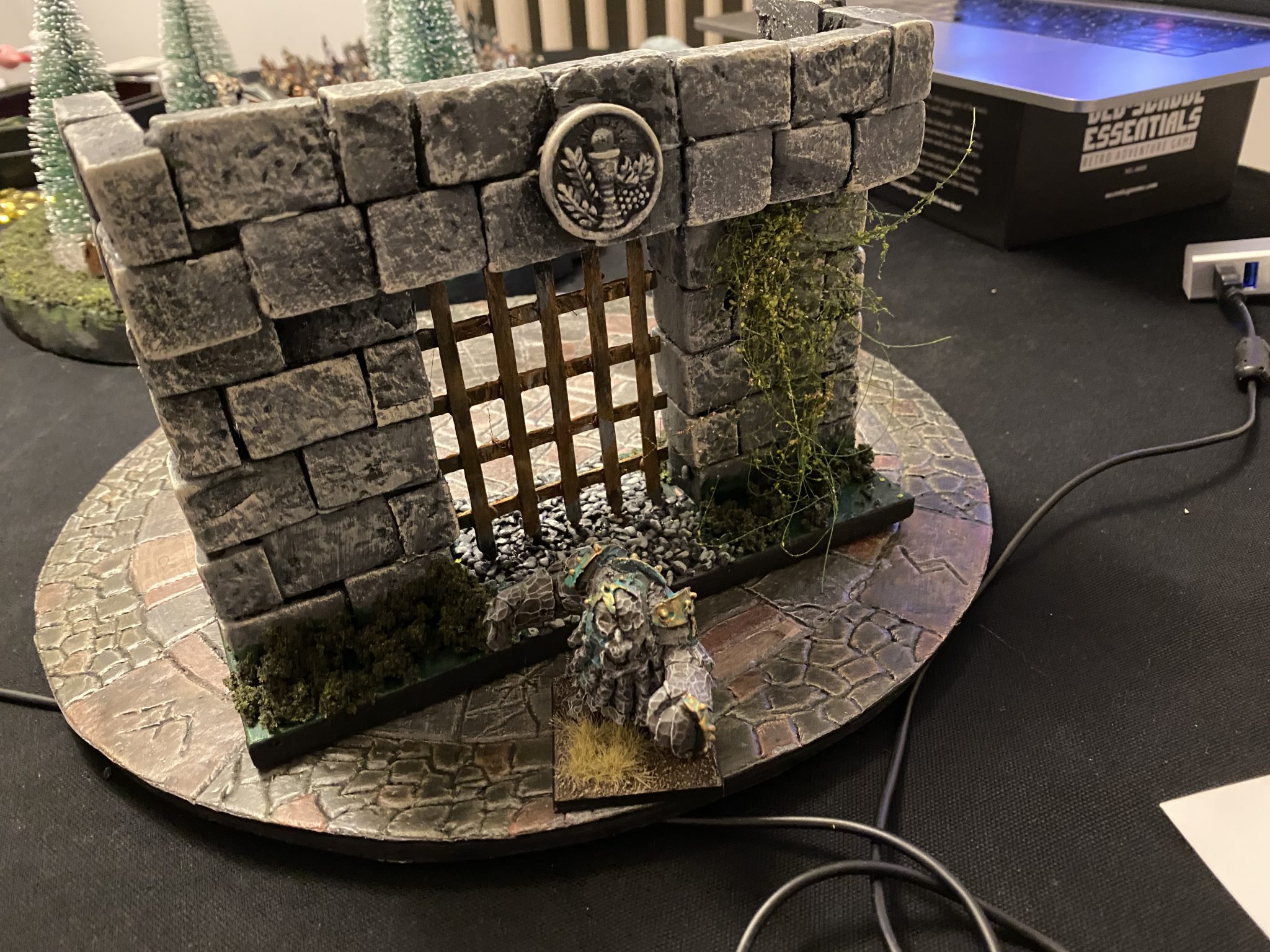 As the Stone Giant broke through, Håkan released the heavy iron bared fall gate, but the Golem caught it and the armies of the Dark Dwarves poured in.

The battle was evenly matched between the forces of the castle (consisting of Kaari, Thorga, Håkan, Captain Keiros, Templar Luminis and the castle guards) against the assailants led by the Stone Golem and followed by ranks of Dark Dwarves and Drow warriors. 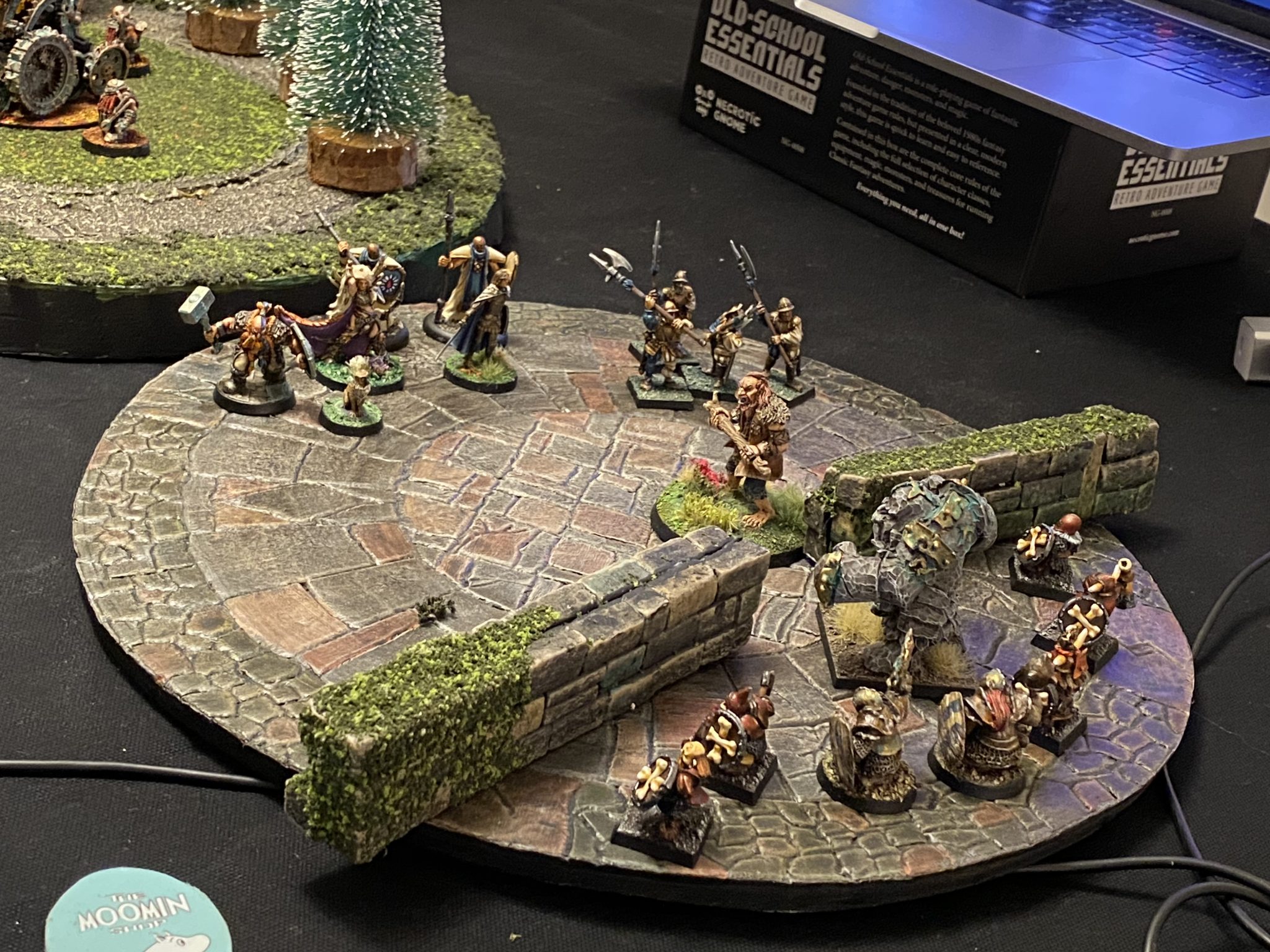 But with the strategic experience of the Dwarven Paladin, the castle force organised into a shield wall protecting Kaari and her high damaging ranged attacks. 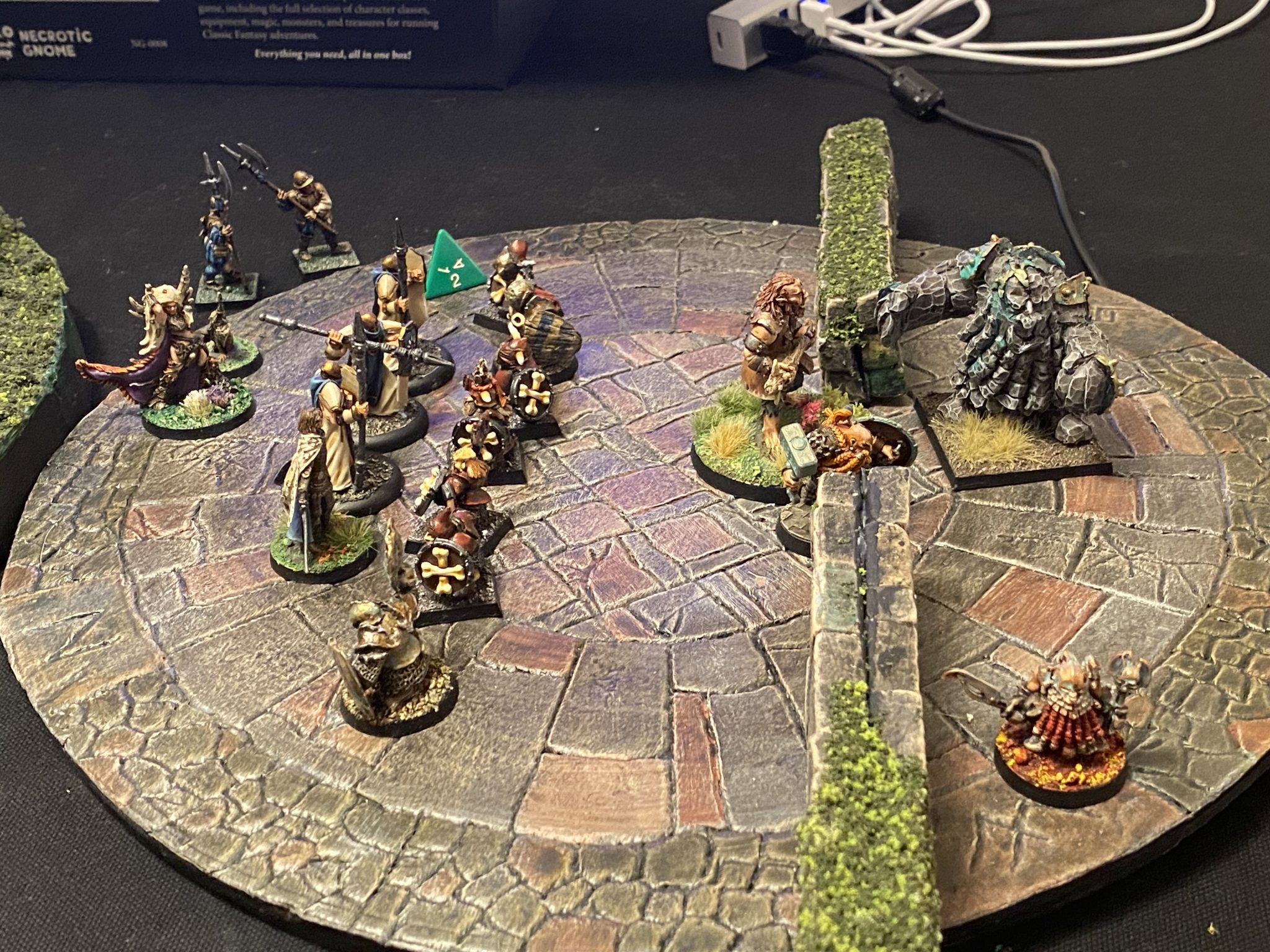 This manoeuvre proved successful, and Kaari’s sharp eye and magical bow brought the Golem down to a crumble with the gate crushing it to dust. 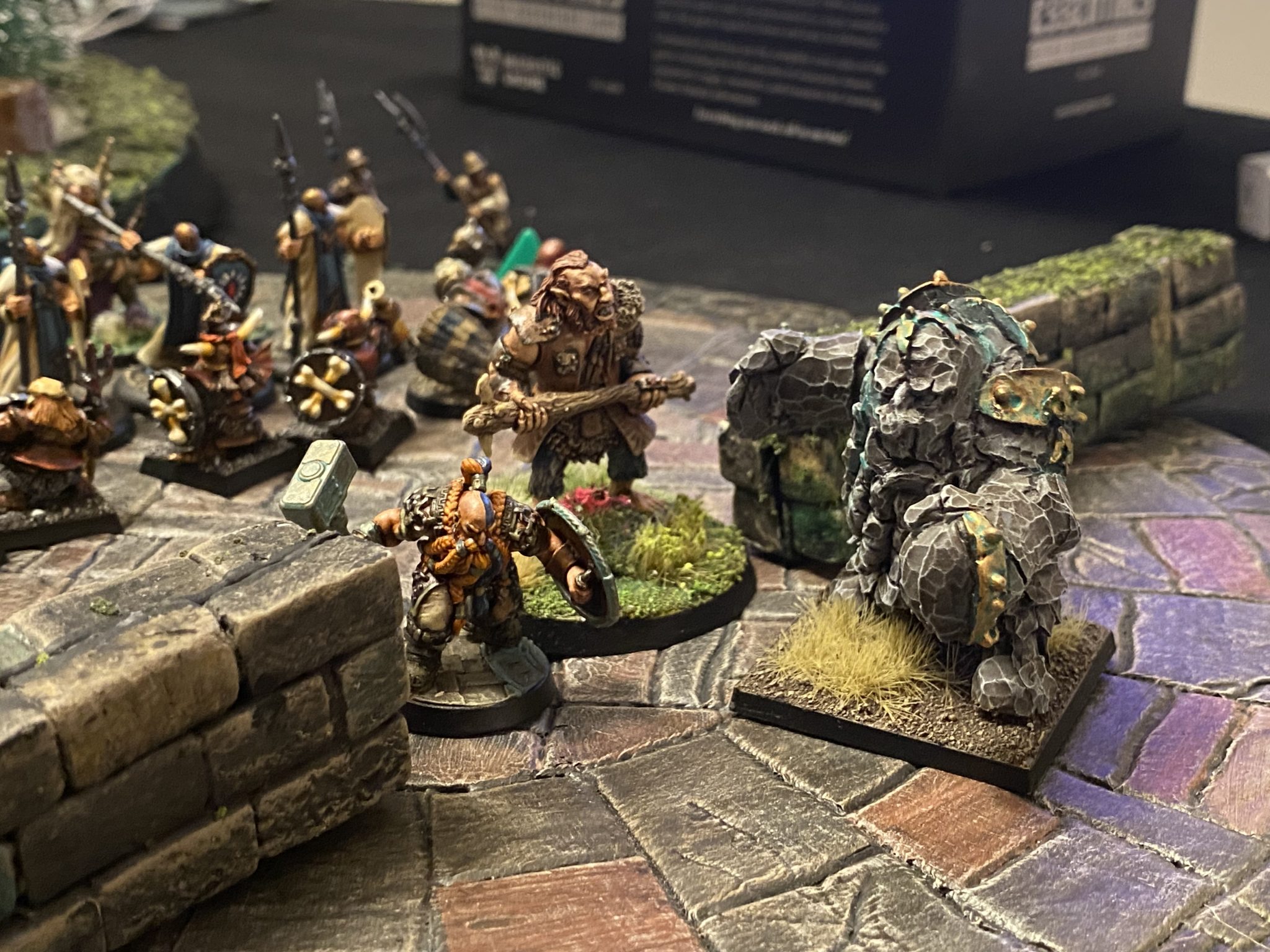 The skirmish at the cannon 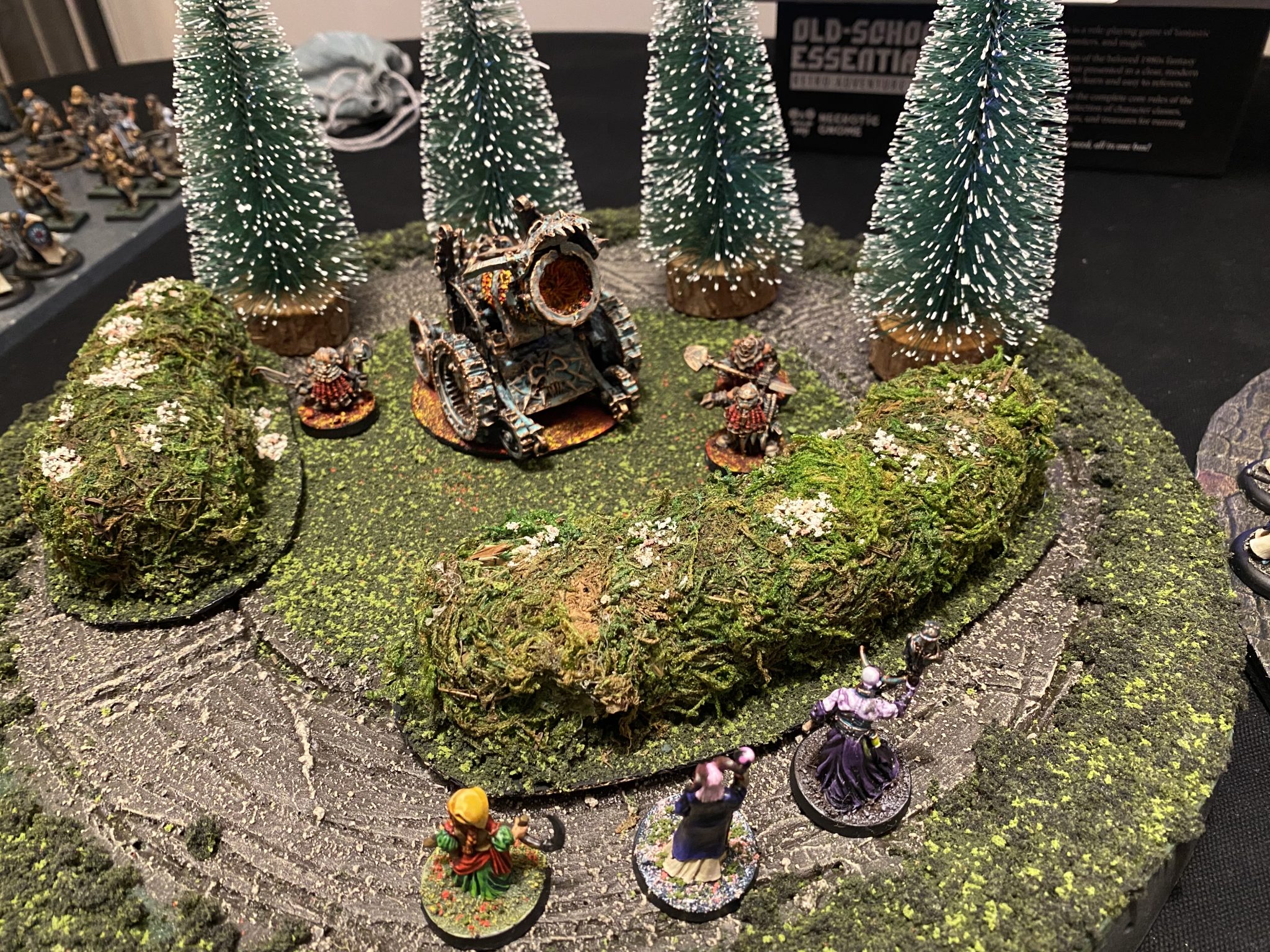 Seipora, supported only with Ms Gentlefeet and one of the Water Called Witches, planned a surprise attack on the three Dark Dwarves protecting the cannon.

She cast blindness on one and directed her two comrades to engage the other two. 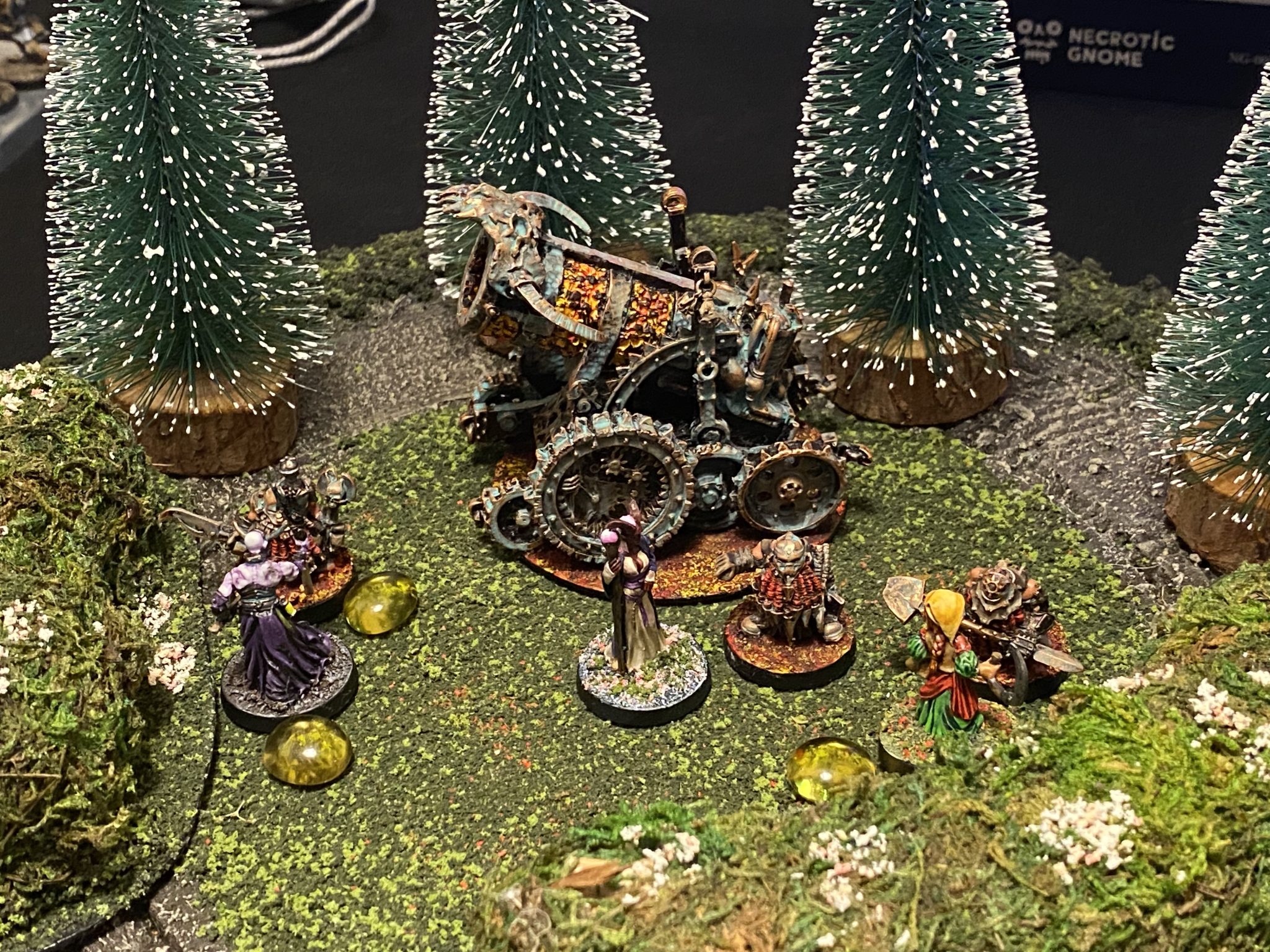 While she soon had the upper hand with the Dark Dwarf she engaged, she realised Ms Gentlefeet was struggling with the sturdy and battle hardened Dwarf. She ordered Ms Gentlefeet away from the fight to investigate the mechanical component of operating the cannon.

In the meantime her and the Water Called dispatched the three Dwarves before they could call for aid. And between the two magic users. they quickly discovered how to move and operate the hellish cannon and fire it at the mighty Dark Dwarven force coming up from the South.

With the cannon hammering down on the Dark Dwarves, it was time to do the final tally on the outcome of The Battle at Dragonskeep. The idea is to count each army’s successes and the result is how many D20s each side roll. The side with most Nat20 rolls wins the war:

This was more nail-biting than I expected.

In the end the Castle Defenders won!

Having fought side-by-side withe both the Water Called Witches and with his ex-lover Seipora, Captain Keiros realised that the Templar Luminis was fighting the wrong cause.

Having defended Dragonskeep and the High King so valiantly, the Templar Luminis were appointed the honour or becoming the King’s personal guard.

For the heroes the victory brought both fame and fortune. They were all awarded the ceremonial title “Keepers of the Dragonskeep Key”.

A few nights later Seipora had a dream she couldn’t remember much of other than a voice saying: “I can see you used our cannon. By using it you agreed to our terms and conditions and you have paid in full with 19% of your soul. Thank you for doing business with us. “.

She woke up with the below contract in her pocket. What did this mean?

We will find out in the next campaign: “A Date with the Devil“, but for now: Big thanks to my amazing players and I look forward to continuing in 2022. 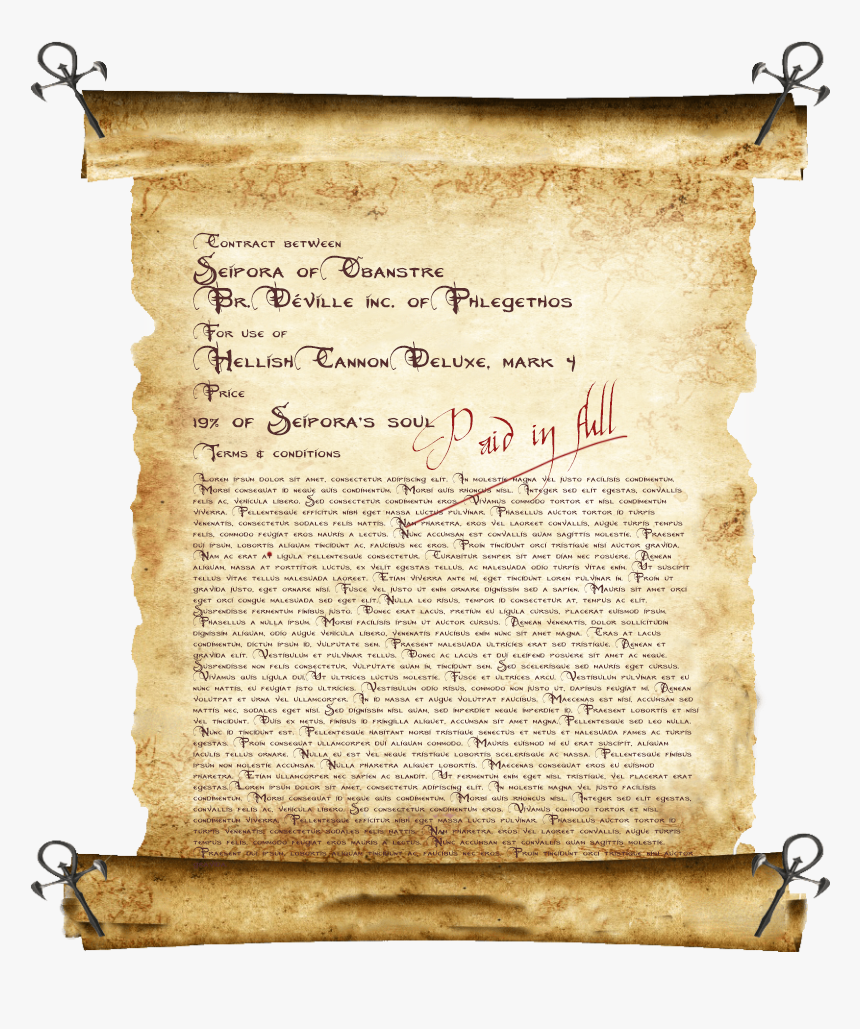