When I introduced 5 friends, who all but one had little to no experience with any roleplaying game, to Dungeons & Dragons early 2018, almost 2 years ago, I did not expect the oneshot would turn into an almost 2 year long campaign spanning 18 games.

And it has been the best of what RPG can offer: Fun adventures, cool moments, those 20s (and 1s), death of a character and an absolute fantastic team of players who have whole-heartily jumped into a hobby alien to them.

However, all good things come to an end and without further adieu here’s the summary of the last game of our campaign “War of the Triplets”.

Once there was a creature. It was alone in its universe and it was happy.

Once it learned of other universes and saw other creatures and it felt lonely for the first time.

It visited our world. It saw a King and a Queen with their 3 young daughters and it wanted the same.

It killed the King and Queen and stole the Triplets.

It found a kingdom with no ruler and took it for itself and raised the girls as its own daughters. And all was good.

One day the creature awoke. Blinded by a curse.

Enrage and confused it could only discern the curse had been cast by a living creature.

So it killed all nearby enemies. The curse remained.

It killed all friends and allies. The curse remained.

Finally, it killed the three young women, the triplets, its daughters. The curse remained.

Now alone again, the creature regretted killing the daughters, so it raised them as undead beings.

The creature now gathered strength and built armies with the intent of killing every living being until the curse was lifted.

Horrified by the prospect, the triplets fled to find a way to stop their father.

Varona Stillborn used her intelligence to create a new element, but her plan failed.

Hortensia Everbleed fled to the mountains to gather increase her strength as a Vampire.

And I, the third sister, used my wisdom and intuition to find, not an all powerful weapon, but a way to weaken my father.

It is now yours to take, but beware this weapon does not distinguish between friend and foe.

The party came from two different journeys. 3 had visited a nearby Oasis and found the Cage of Carnage and the other two went to the location of the final showdown to scout ahead.

One tricky practical challenge was that one of my players could not make it to the final game, but since he had a powerful time altering magical item, I planned the game in such a way that he had sacrificed himself removing him from his fellow party members’ memories, but in doing so allowing them to re-fight the encounter. The one we play was to be the second one without players or characters knowing it.

Objective was to find the entrance to Fortress Fata Morgan, the Windy Gate, before a flood of undead came rushing down.

The 6 doors you see below are all fake, there’s a mirror behind each to point the players to the fact they have to look in the magical mirror they are carrying to find the entrance which is bang in the middle of the board.

However, the players made the connection with the magical mirror really fast and chance would have it they looked in the mirror at almost the exact spot where the real door is!

The door wasn’t physically at the table yet, so as a DM I could have decided to move it somewhere else, but the logic of the players, the way they methodically and with some luck found the right spot… it wouldn’t have been fair.

So this encounter came and went fairly quickly.

Note layout of scatter was different in game as it was positioned by some of the players as a reward for their successes in previous game, 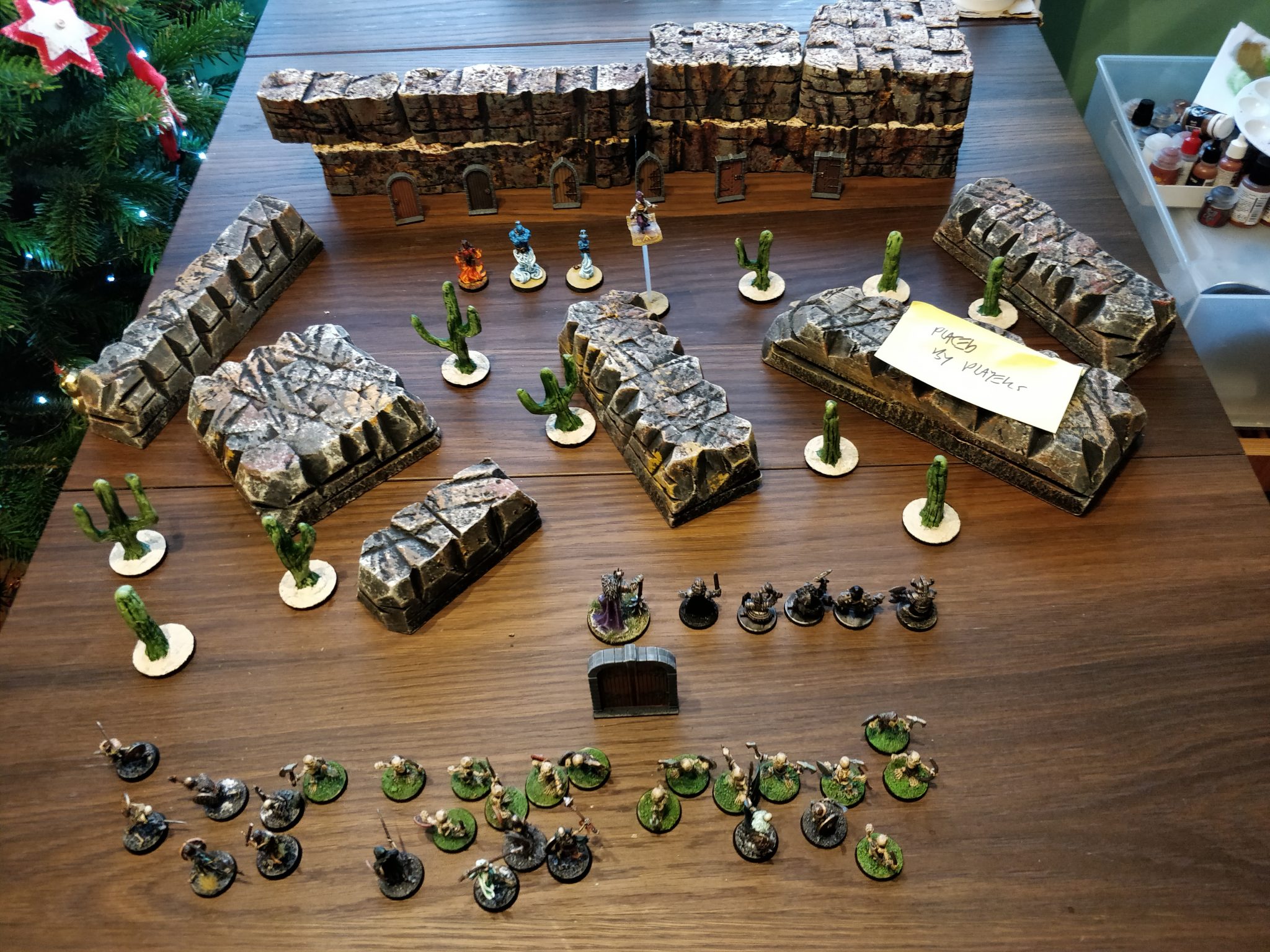 The players heard the tale described above by the third sister the mummy queen and that led them to the basement of the fortress, where they stepped across into the Feywild only to meet an old friend Bebbie The Beholder Bartender having breakfast with 4 fey creatures, who each would answer 1 question with a 50/50 chance of telling the truth.

This encounter was much more fun than I expected! 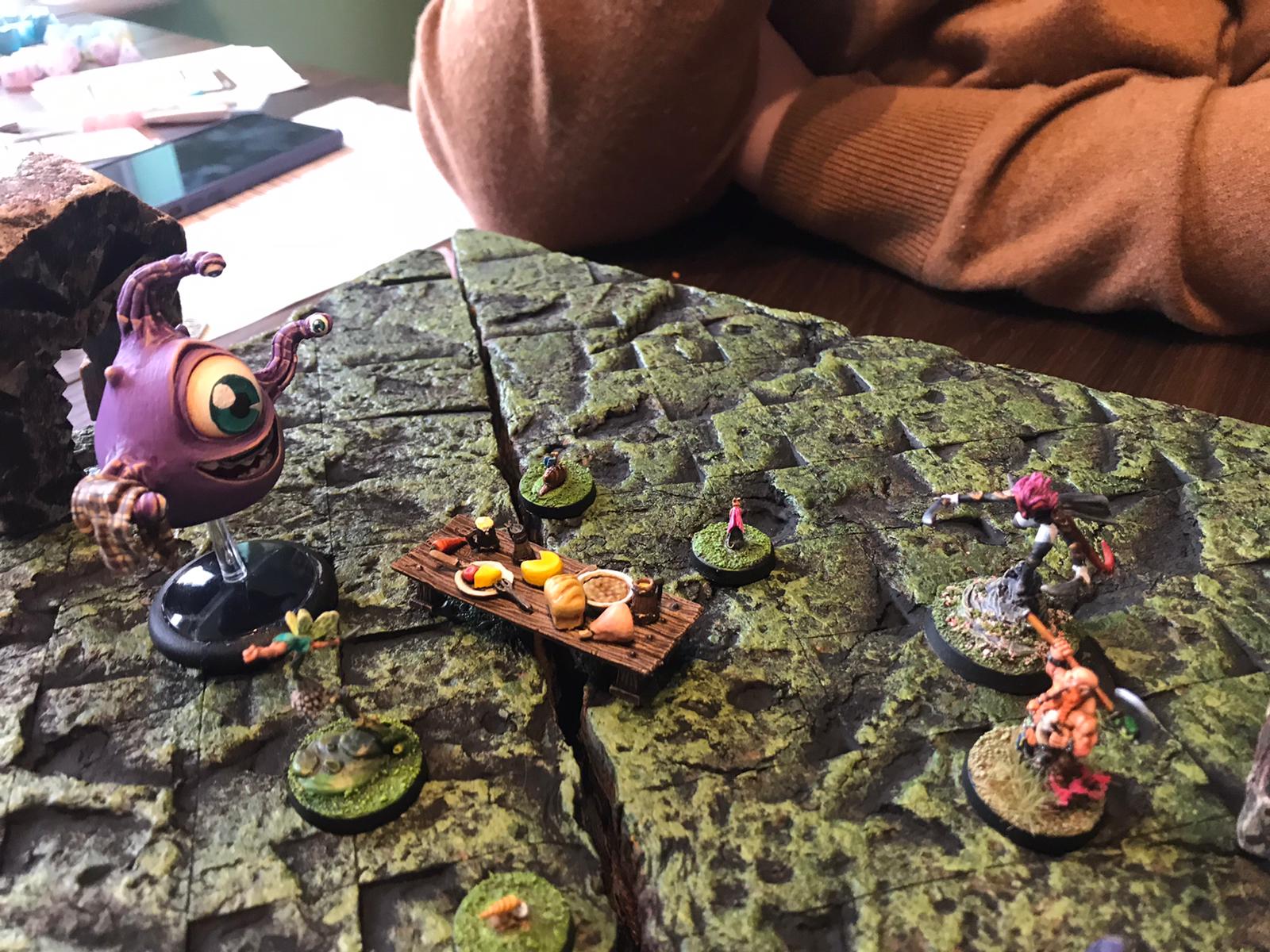 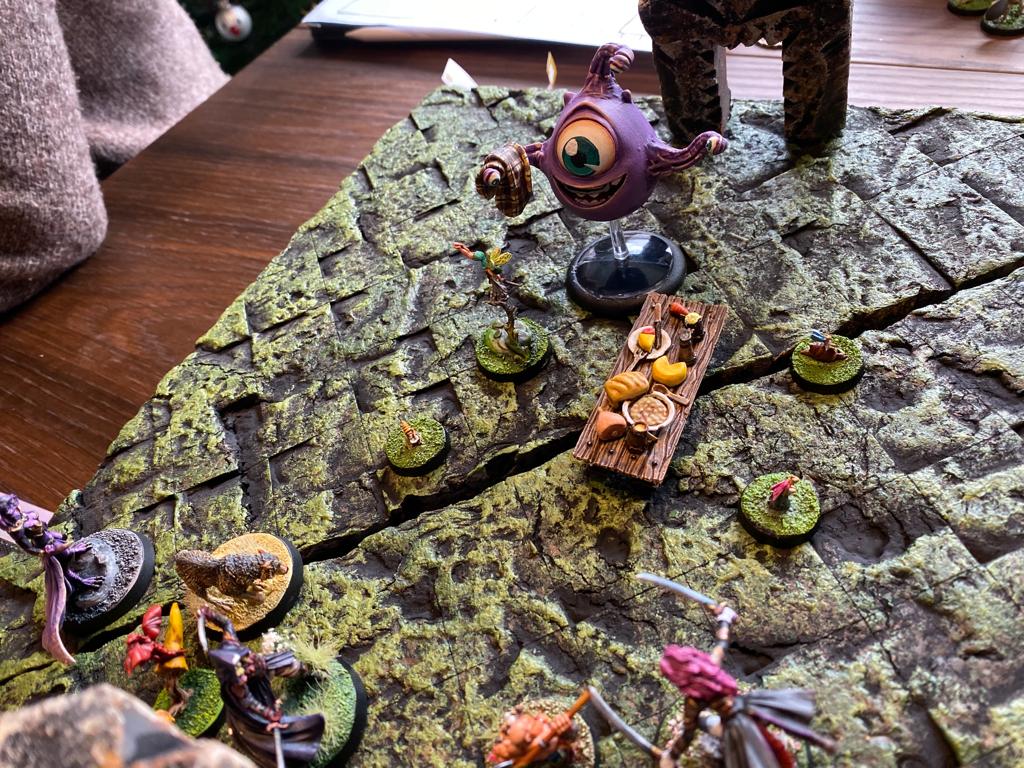 Encounter 3: Get the Weapon

I used the tips from Dungeon Craft on running a Labyrinth. Was a great fun experiment.

However, the Minotaur was almost a random encounter, where as the Medussa was the real price and her head the weapon the party was seeking. These were my rooms: 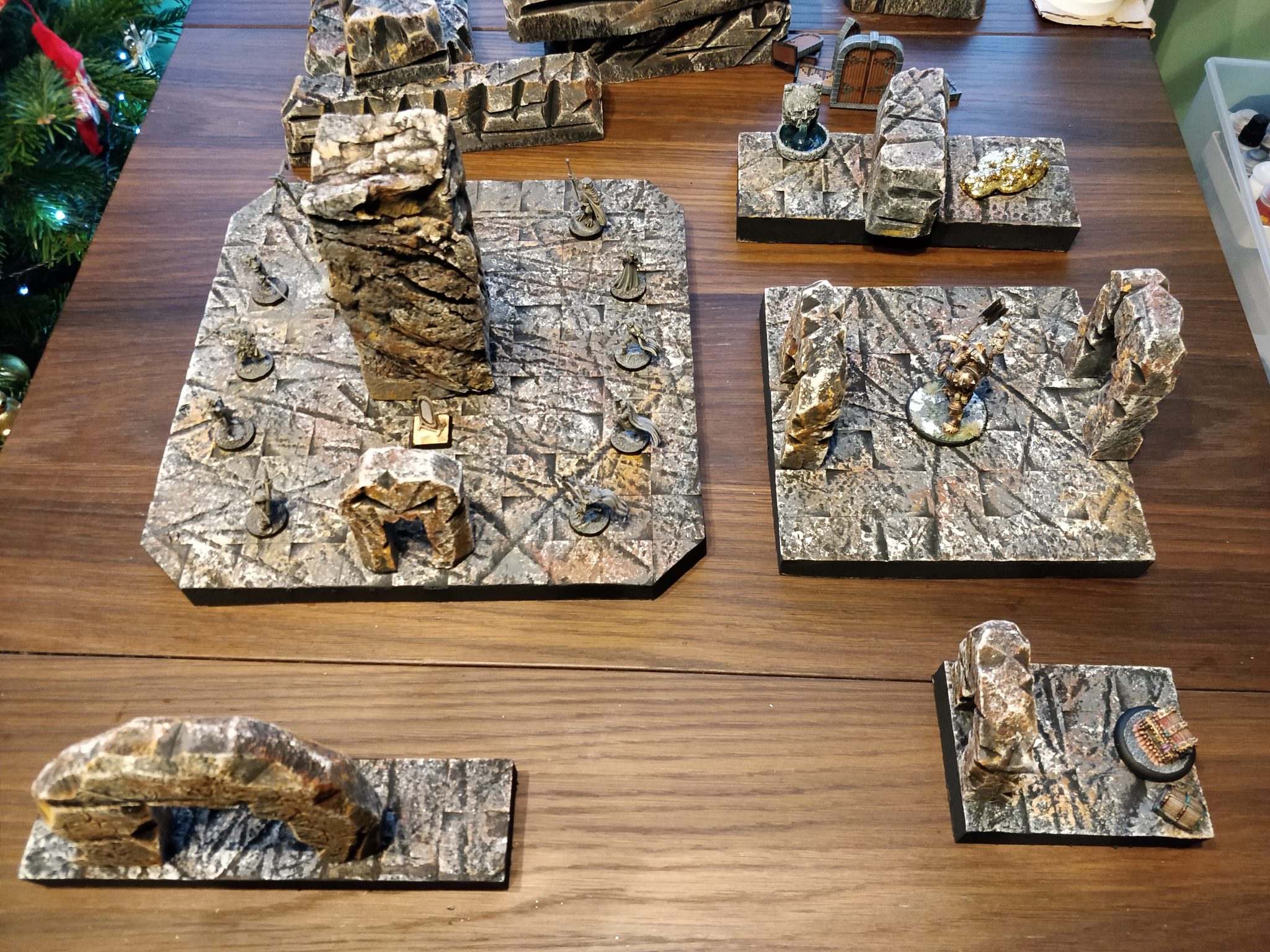 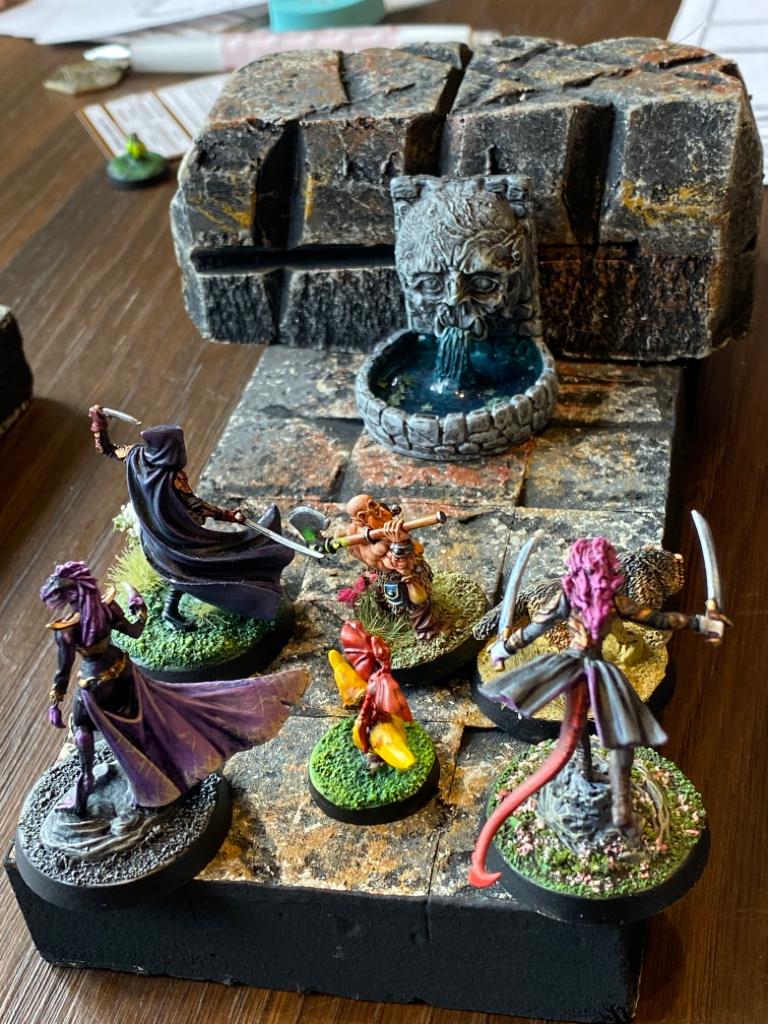 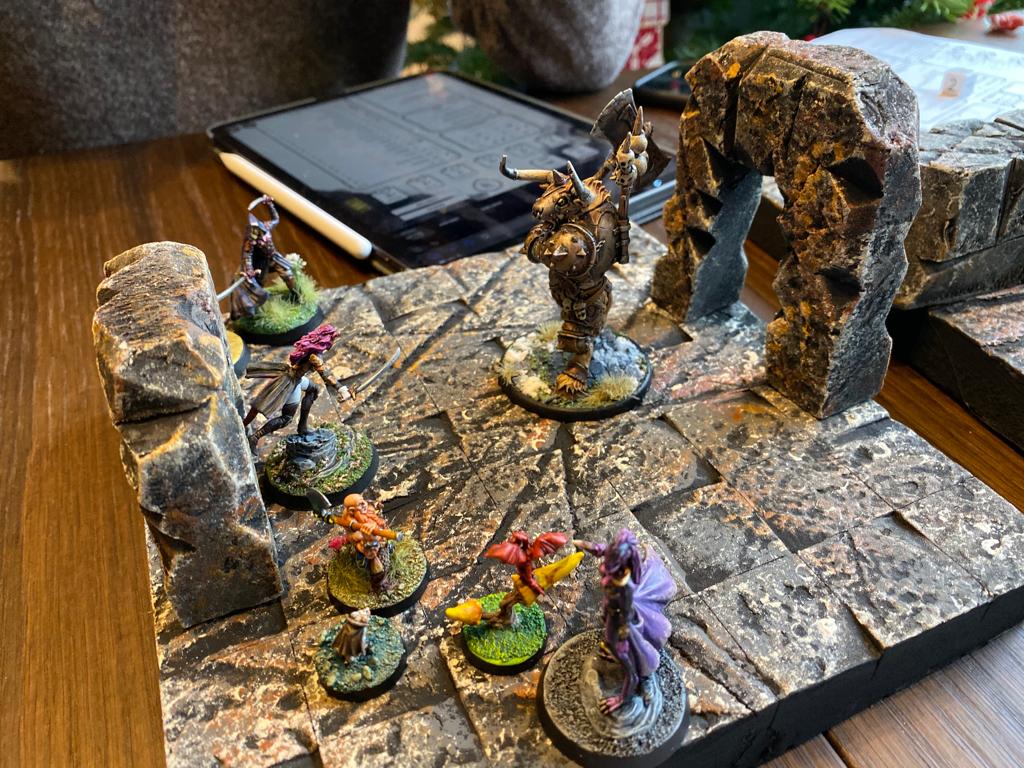 Encounter 4: Get to the Portal

A frantic battle in the Mummy Queen’s room. Her conjuring a portal while her guards and the party held off the undead horde. 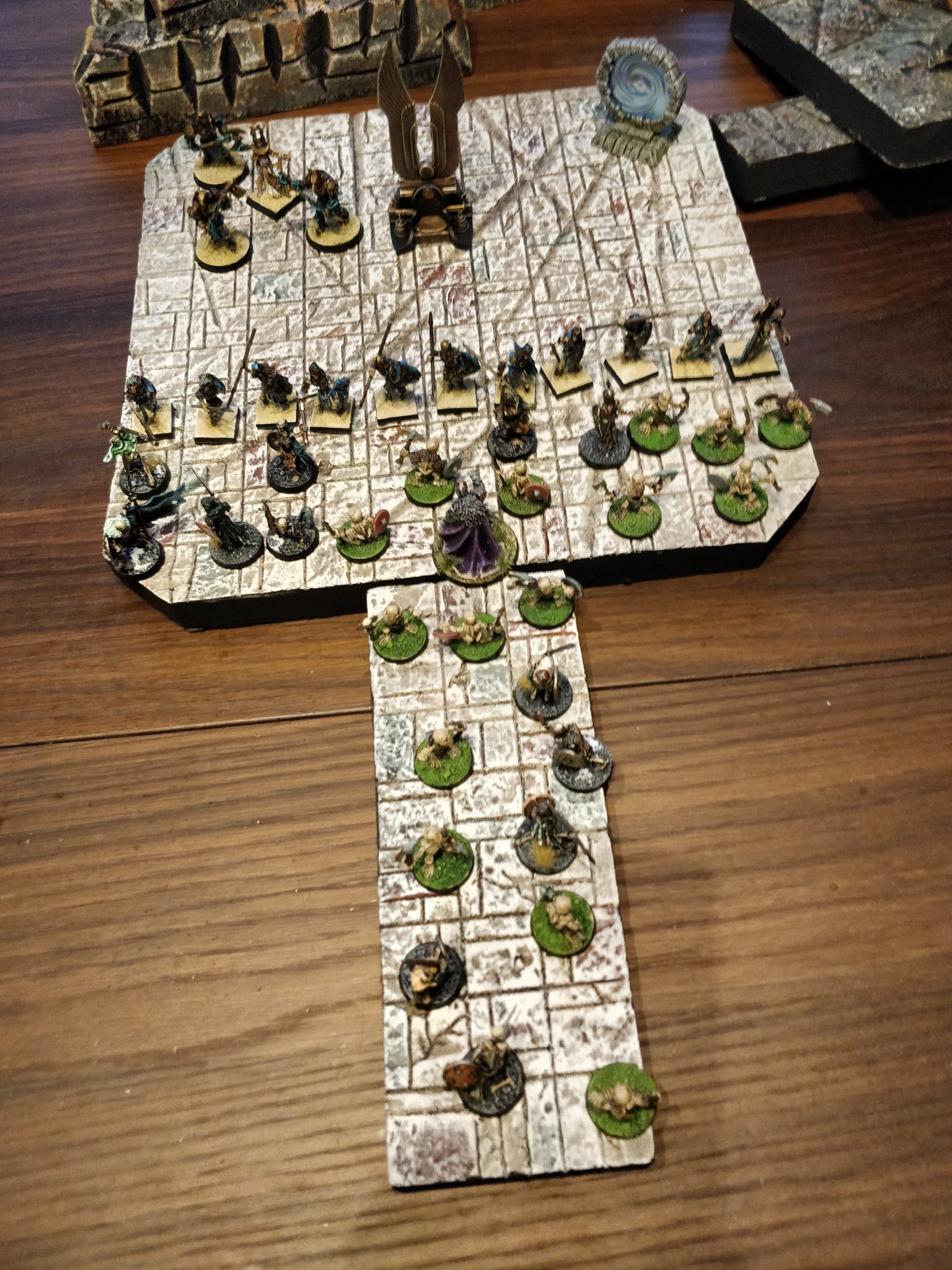 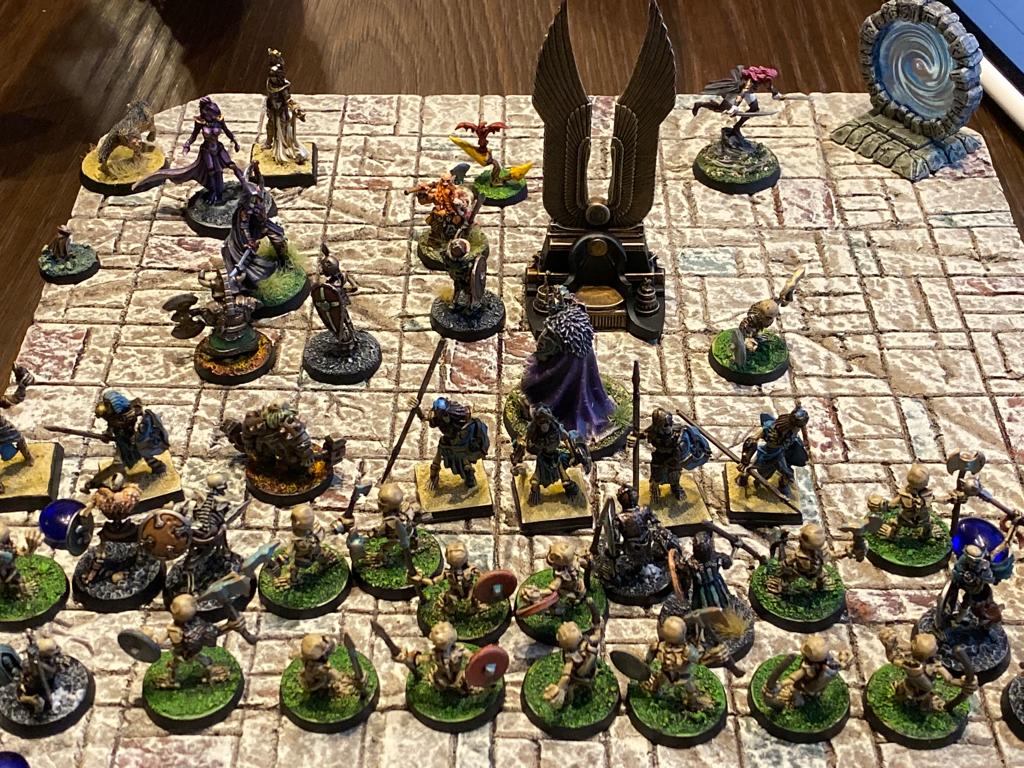 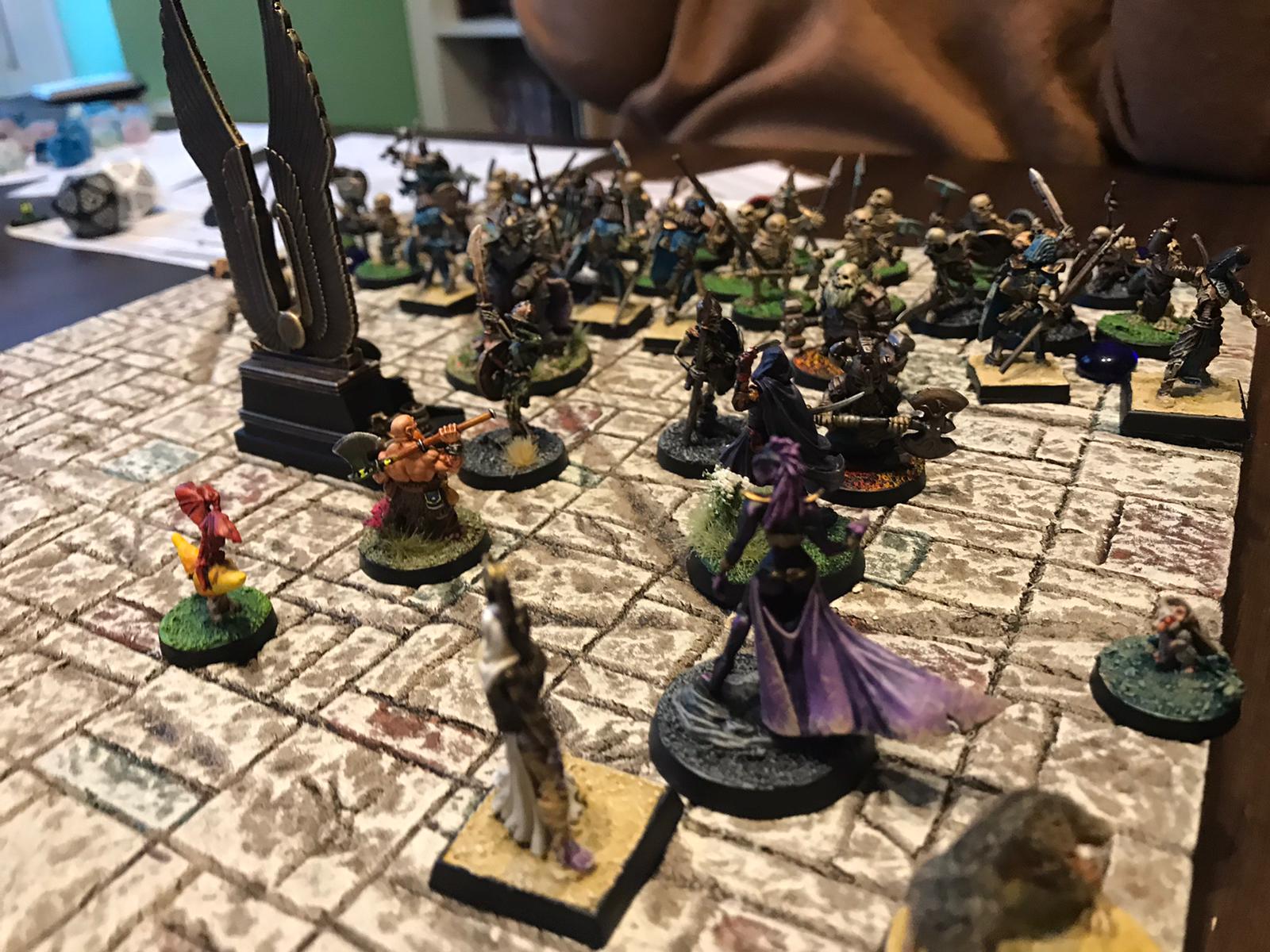 Encounter 5: Through the portal and into the fray

Party is teleported to an underground lair of strange dwarven design and finally learns the truth about the Triplet’s father: He is a Beholder blinded in the centre eye.

I wanted to make this encounter special to reflect a beholder lair. So I built bespoke scenery that could stack to two tiers.

I brought in the ground tier, had the beholder attack and retreat around a corner. As the party ran around the corner, the beholder was gone! Where was it? look up. 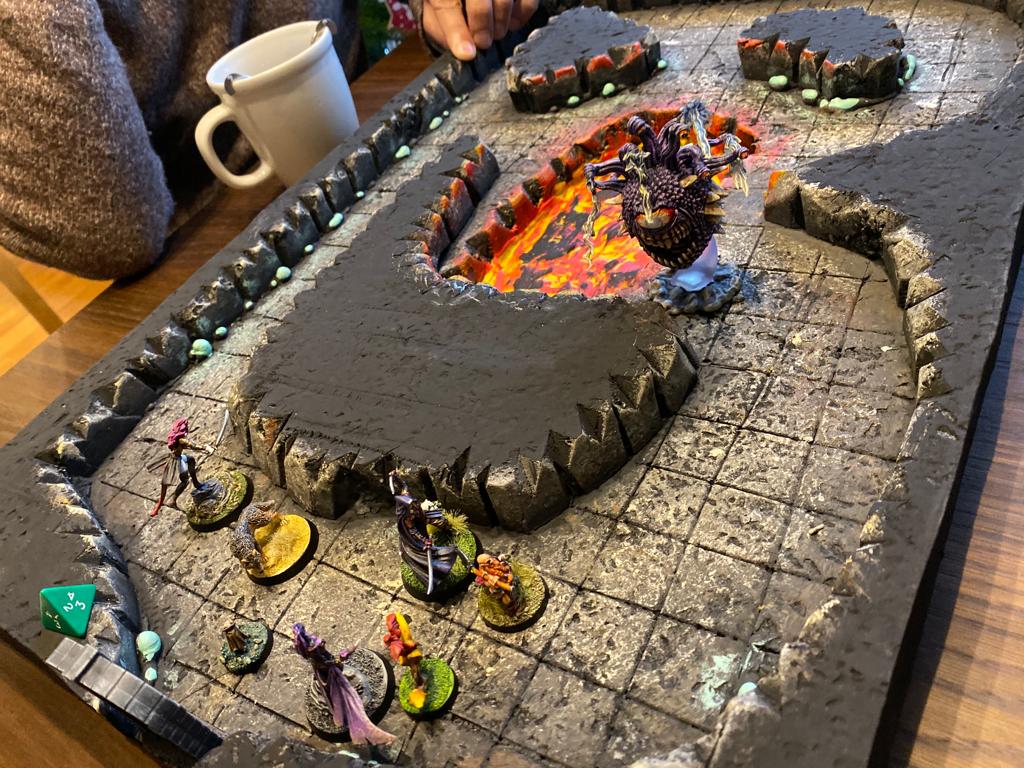 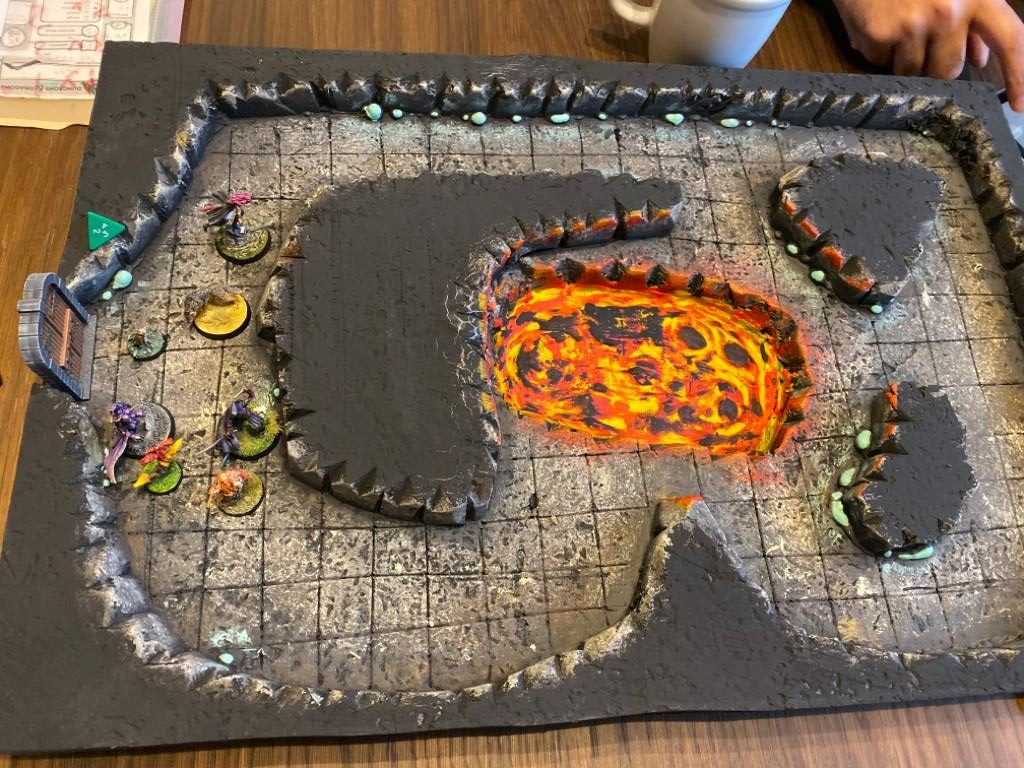 And then I brought in the second tier and I loved the look on my players faces when they realised this would be a fight in 3 dimensions.

All and all fun final fight but a couple of things didn’t work out as I expected:

In the end I had to kill our Ranger just so I could tell the story of how their 5th party member had saved the day by sacrificing himself.

All in all a good fun fight. 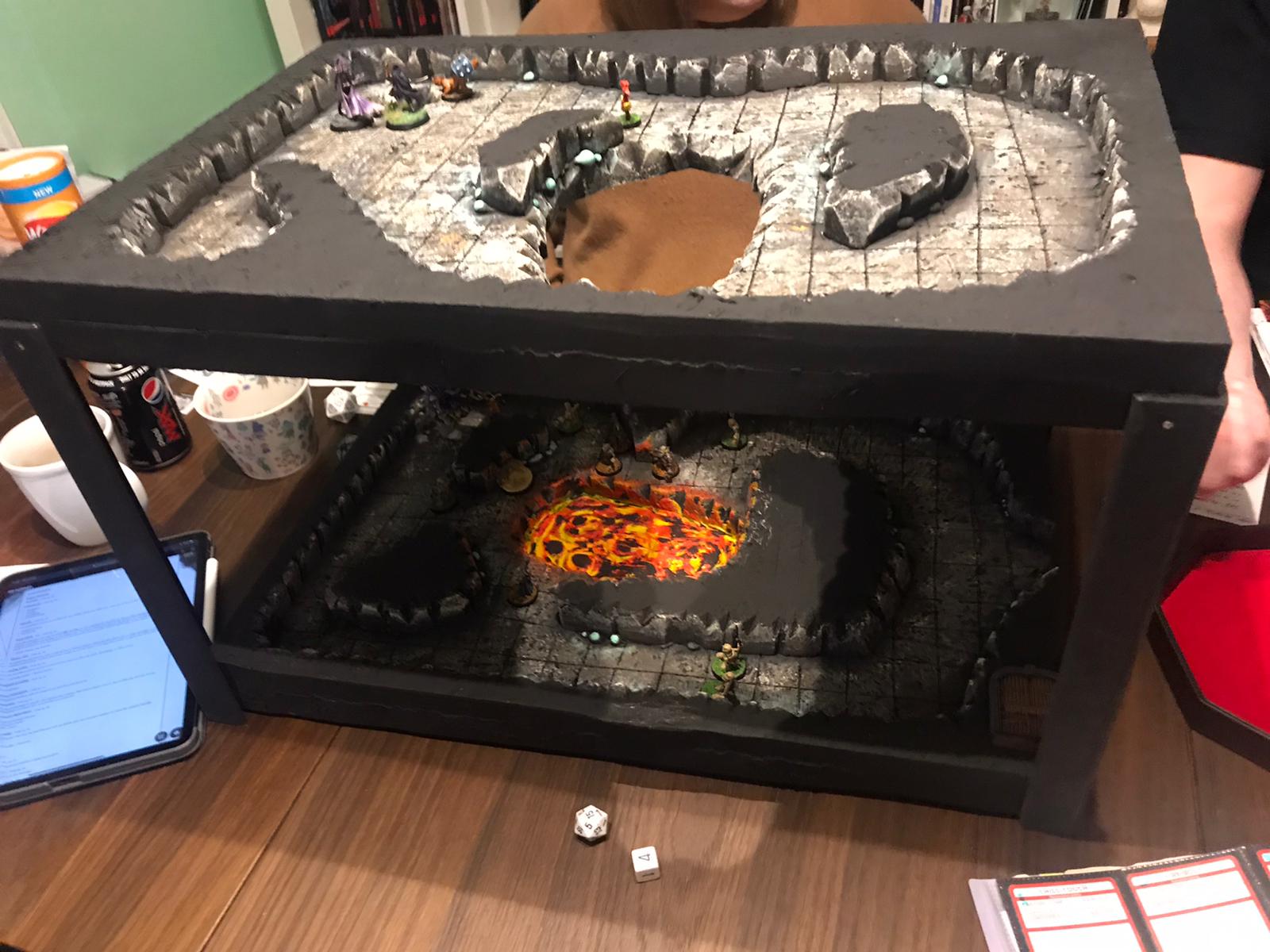 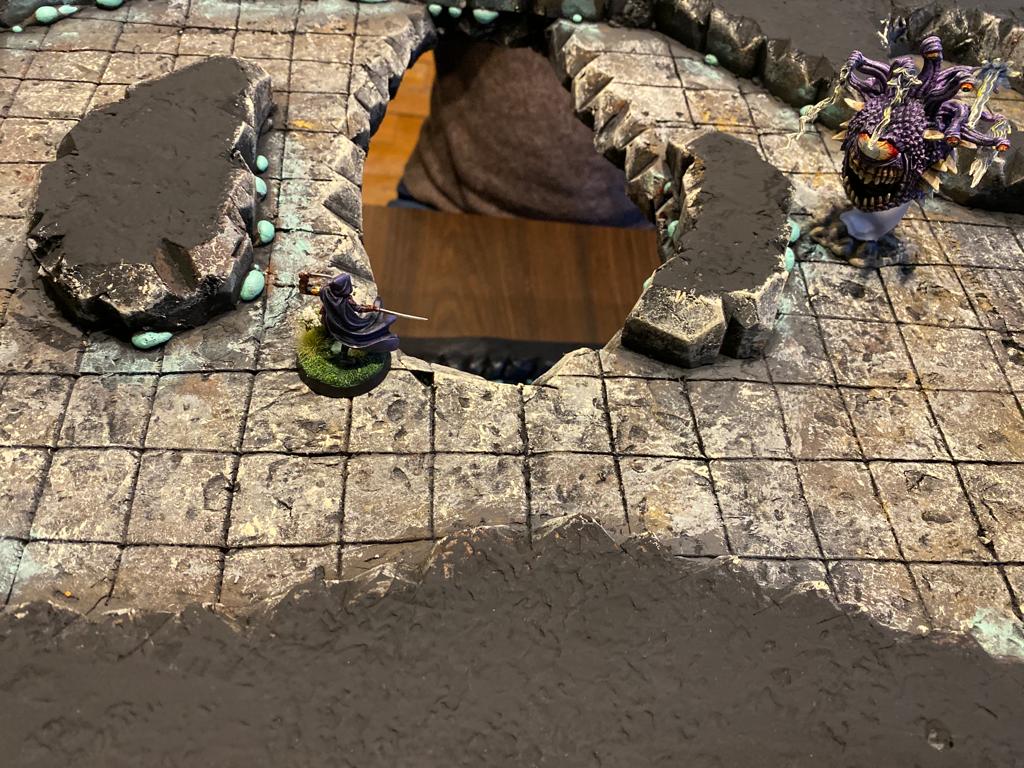 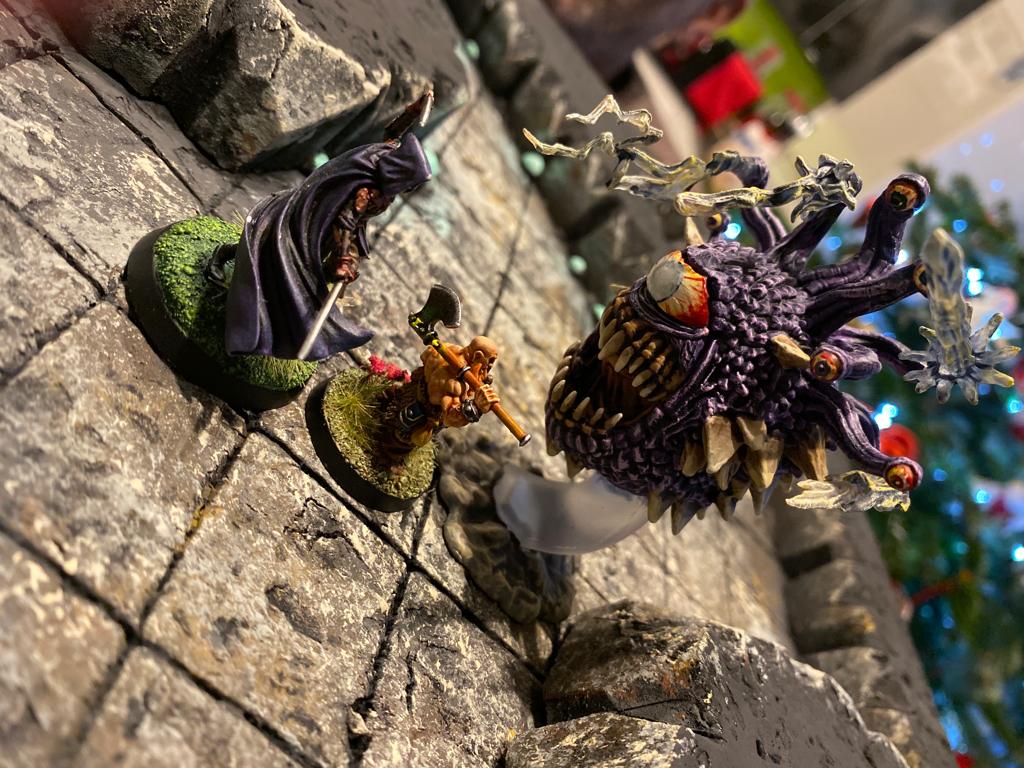 As the party made their way up, they realised they had been fighting under the Dwarven mountain kingdom Parthonax.

They were hailed as heroes having saved all living creatures in this world.

However, in time, the life span of the different races came into force and first the Dragonborn Sorcerer passed away having lived a full life, soon followed by the Tiefling Rogue.

As age creeped up on the Dwarven Barbarian, him and the Elven Ranger decided to retrace their steps of their adventure and soon found themselves back in the Everdry Desert where they had found the Windy Gate.

While the Dwarf took a breather, the Elf darted around looking for something and soon found a message in a bottle he had written prior to the encounter fearing him and his friends would not have survived.

As they read the letter, they noticed the elf had named 4, not 3 companions. Who was the 4th? The Cleric Feather? Neither had memories of this person, but they couldn’t deny that the Elven Ranger had written him in the letter in the same reverence as the rest of his fellow travelers.

“Who knows?” said the Dwarf. “Maybe there’s still a mystery left to solve”.

The Beholder cursed itself in its sleep!

As you may know, Beholders have very vivid dreams… dreaming of beholders is how the procreate… so it is not that surprising that they may also cause harm to themselves and as such fuelling their xenophobia.

We plan to continue playing D&D and next year I will start a West Marches style campaign called “Daisygate”.