This post is very long, so here’s a ToC to give you an idea of what’s coming up:

After the party successfully saved the Unicorn (and as such the flow of ale from Barley Town), the party left Parthonox to head to Lyrayara, The Twin Ominitropolis of the Elves.

Crossing the Godscar bridge, they saw a boy on the other side shouting for help as he was being chased by a Goblin on a great beast.

Having dispatched the goblin and saved the boy, the party accepted to help free his sisters from the hands of the Goblin Chieftain, Gnimsh The Wonderful, who had kidnapped the kids to make them use their slender arm to open an ancient door in a nearby collapsed ruin.

After a brave, but failed attempt at a full front assault on the goblins, it became clear the goblins were more than happy to exchange the kids for the key to the ancient door… if the party could find it. 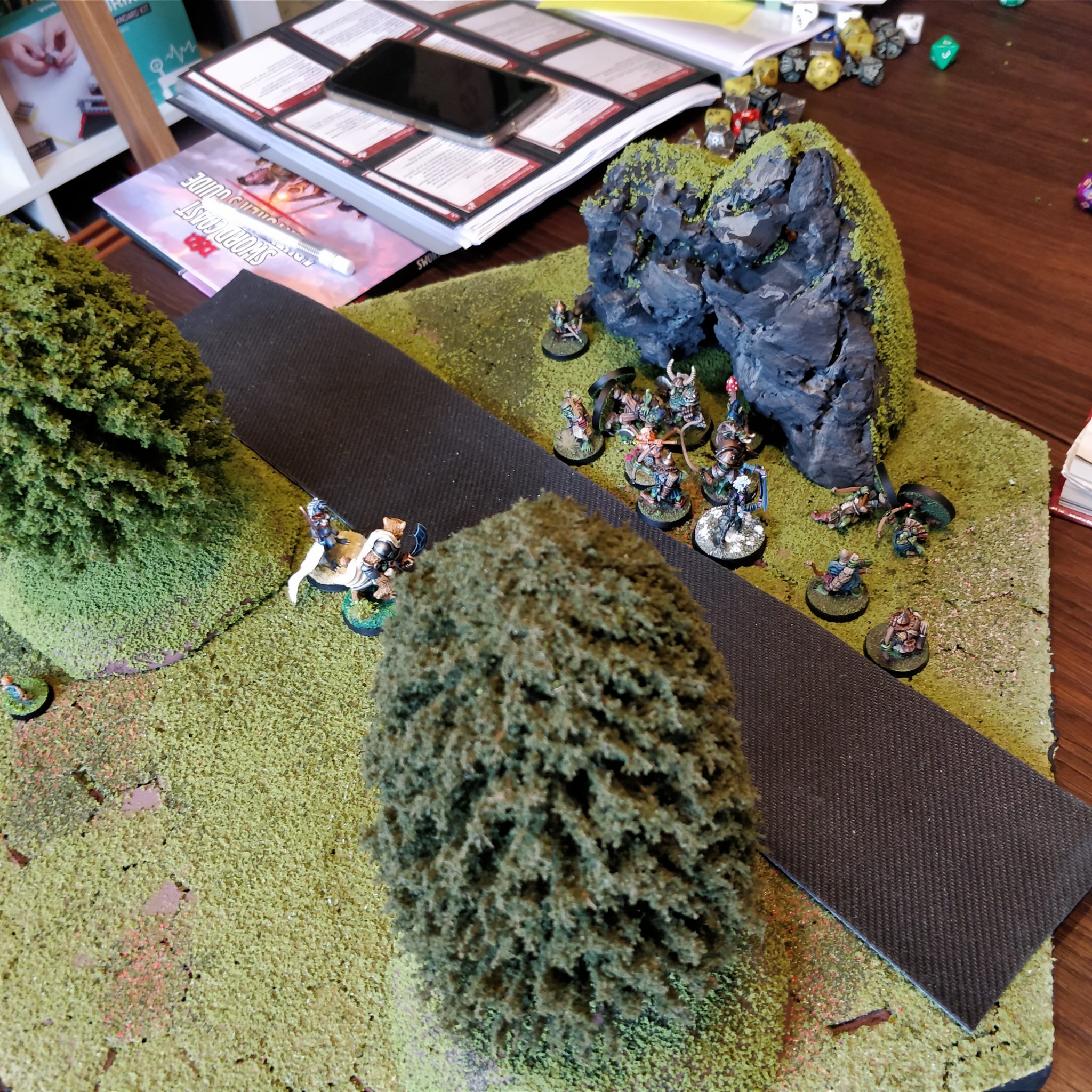 As it happens, the key had been with the children’s parents, who were killed a few days earlier by crocodiles. The Goblin Chieftain quickly set the record straight that the so-called crocodiles were in fact the savage gatormen, whose behaviour and goals were equally alien to the party and the goblins.

The party found the cave of the Gatormen and quickly killed the guards. Inside they made an unlikely alliance with Esmaralda the lonely hag who fell in love with the party’s elven ranger. This infatuation led to the hag helping the party cross over to the Feywild in order to access other otherwise inaccessible areas of the Gatormen’s cave. 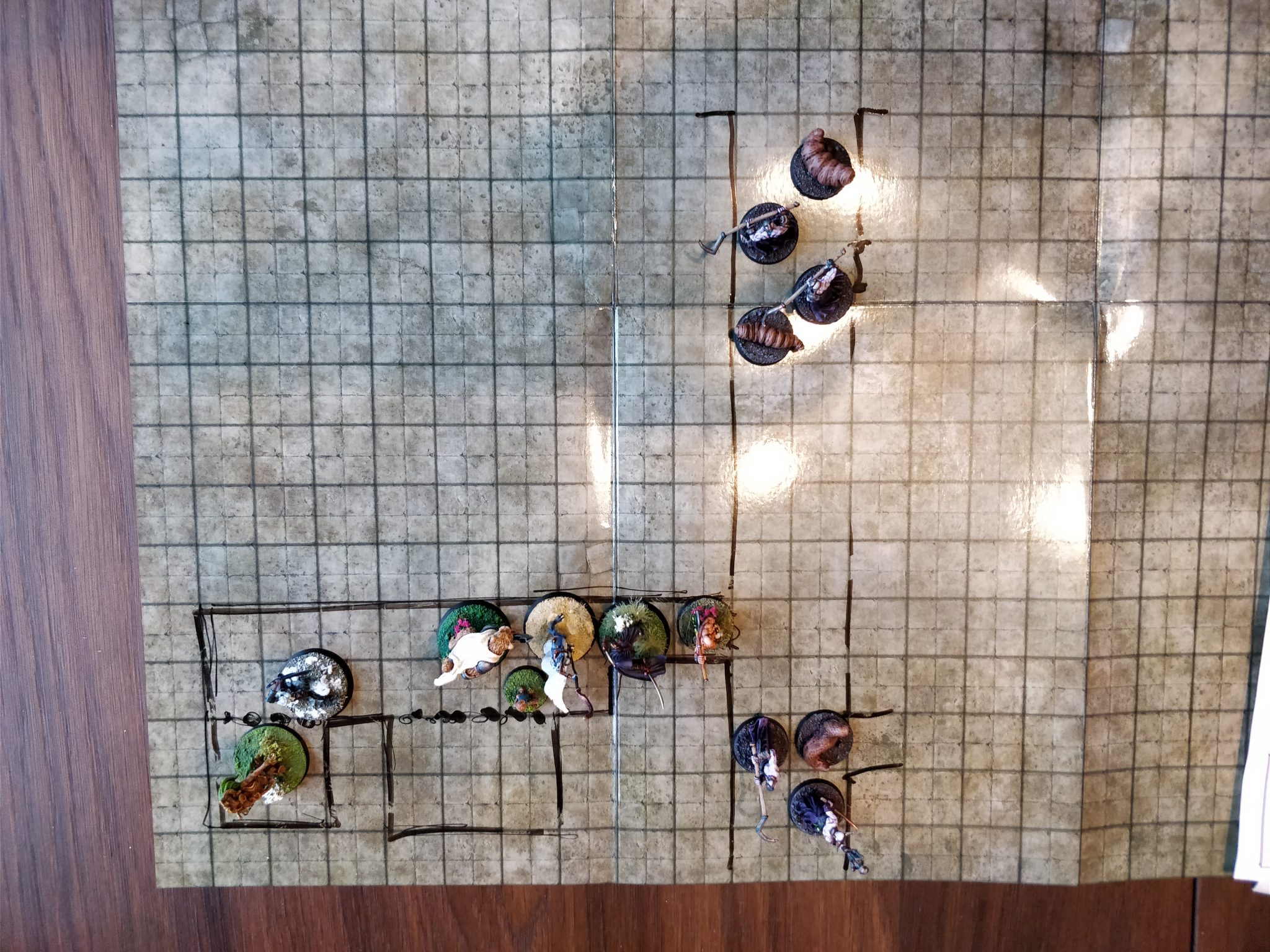 The party made it to the Feywild but unfortunately we ran out of time as I had underestimated the time this particular adventure would take. So we left the party in the first room, the local prison, in the Feywild where they met a captured Dryad.

While lingering in the prison, three of the party members fell asleep and Chapter 2.5 happened.

Between the two halves of this particular adventure and wanted to do a couple of changes:

Looked great, but the walls made it difficult to align the tiles, plus it couldn’t fit my table 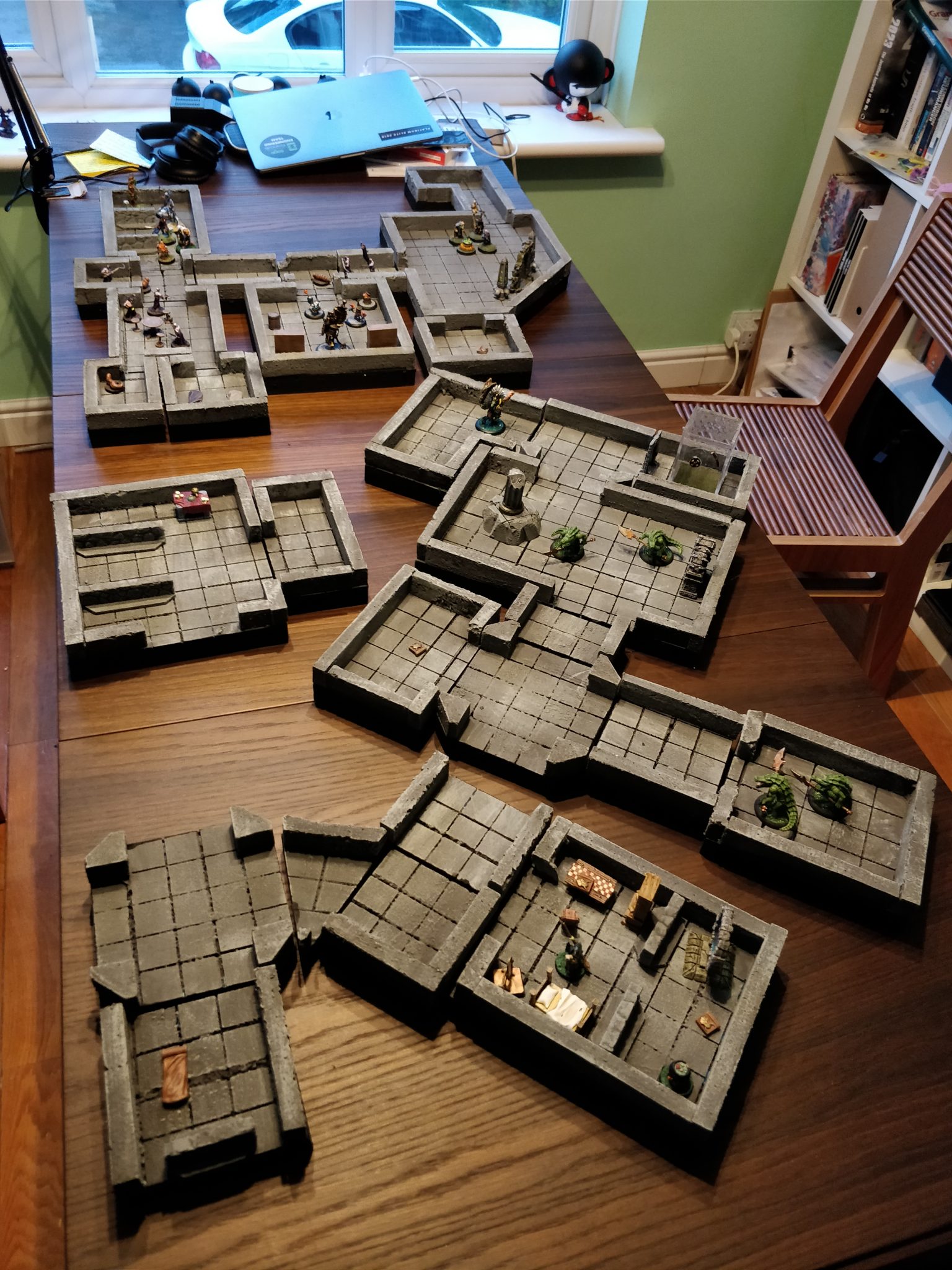 I re-made the tiles, cutting off the walls and ended up with this, which granted doesn’t look as epic, but it works better. 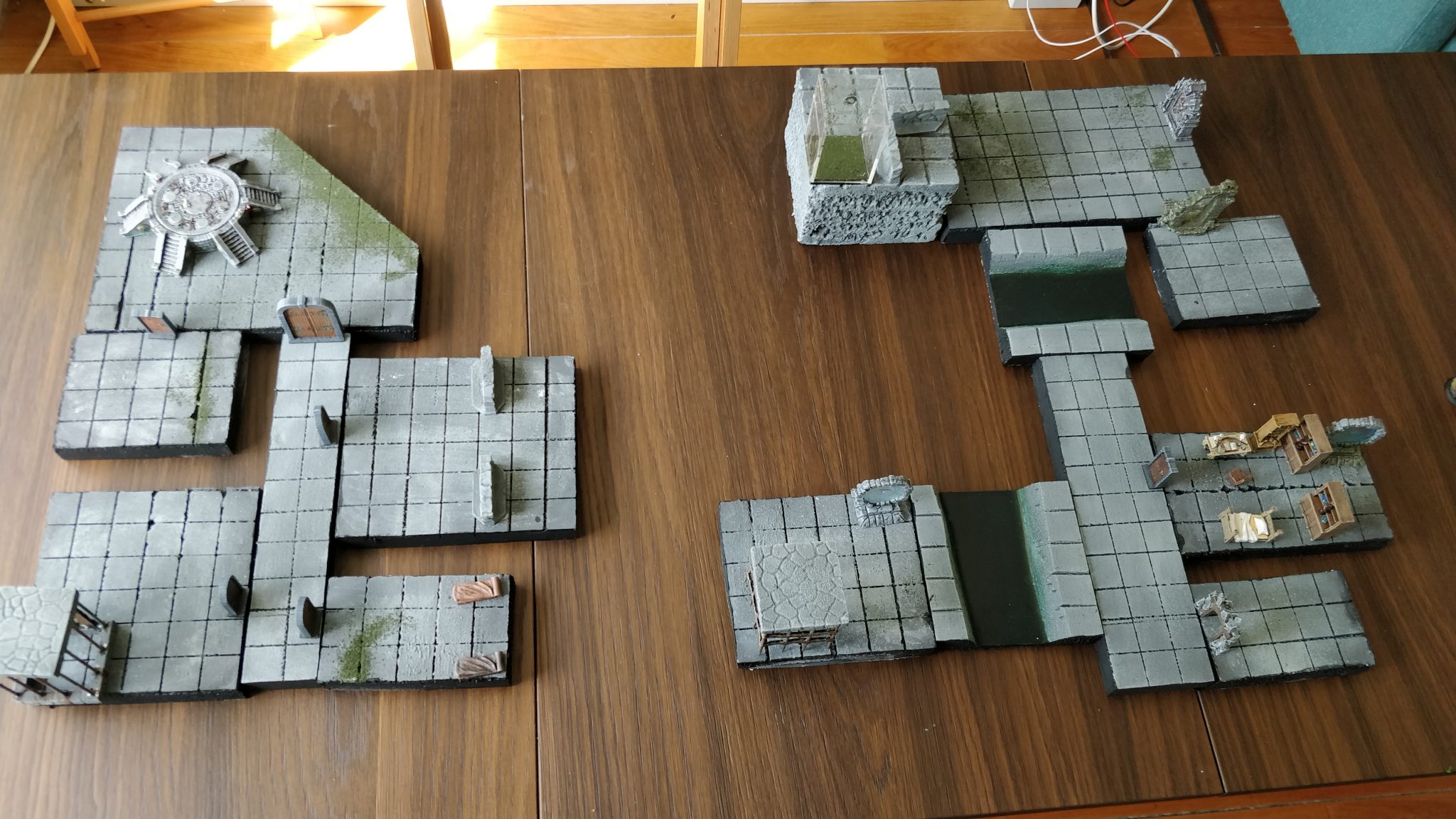 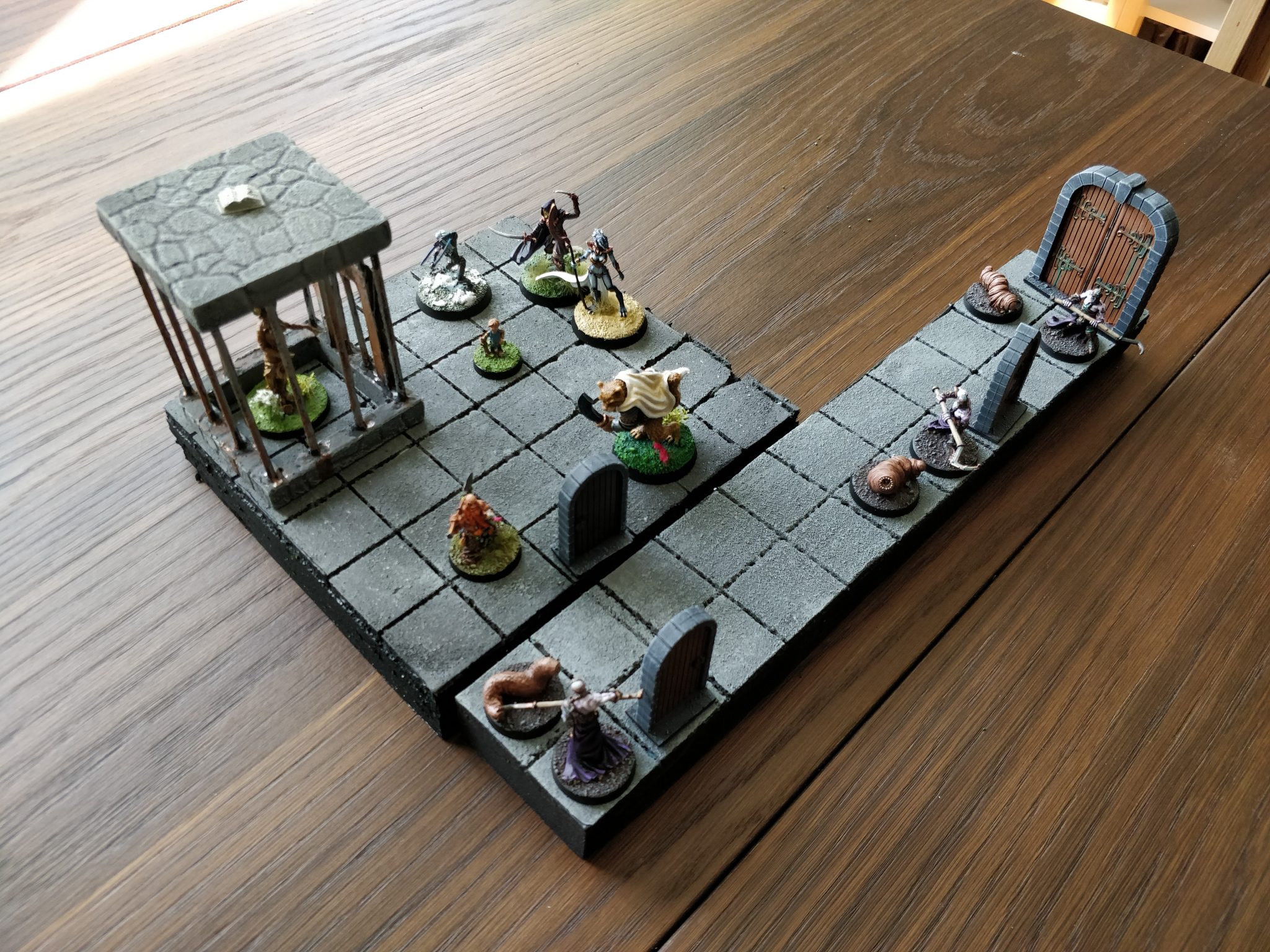 This was a lot of fun and I applied a bunch of stuff I learned from the Runehammer Youtube channel especially around room design and key mechanics (Treat, Timer, Threat). 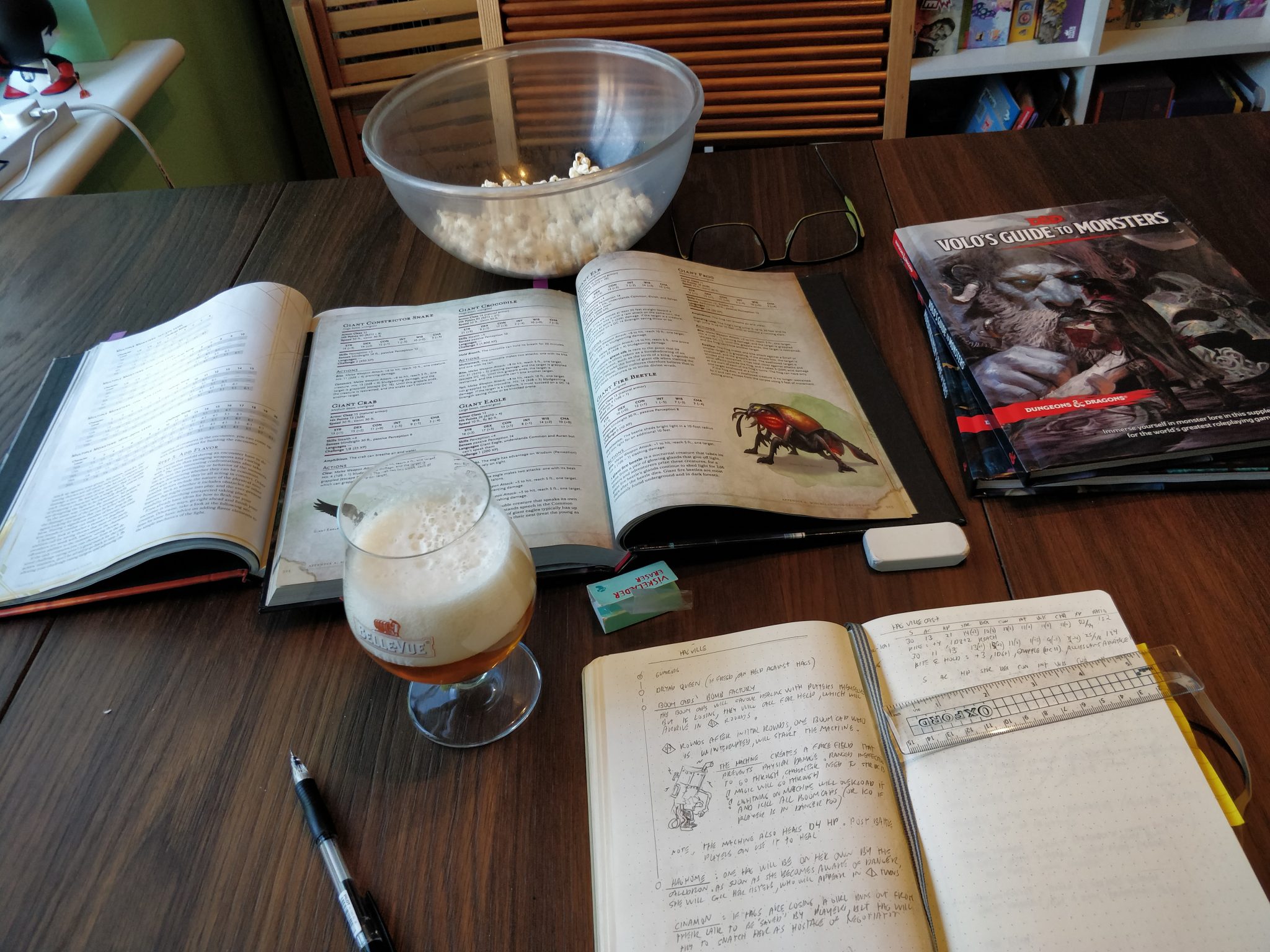 The party woke up after a deserved (and for some, disturbed) night of rest and carried on through the Feywild, only to face the three hags running the show. A short fight commenced and the hags were killed (note to self: Don’t nerf baddies. The party is lethal by now).

In the process, the party save a girl named Cinnamon, who the hags had in their home.

Scouting out the Feywild plane, the party found a way back into the material plane and straight into the main living area of the Gatormen… or rather their toilet (roll CON check).

The party all snuck into position around the sleeping Gatormen and a quick fight later, they were all dead, but in the process the Gatorman Enchantress had been woken up and she proved a hard fight.

Having cleared the area for Gatormen, the party gain access, through a blood sucking portal, to the Gatormen treasure room where they fought off some crocodiles and grabbed the key and legged it before the Giant Crocodilles showed up.

Back outside the party handed the key to Gnimsh who went inside to unlock the ancient door. Some rumbling and shouts later all the goblins and orcs, except the orc Mr nice, were dead!

The party went inside and found all goblins killed by an ancient Dwarven stone golem. They sensibly left, but brought with them the key for future reference.

Finally the part arrived in Selbina where they handed the 3 children and the girl Cinnamon over the children’s uncle and aunt, Hozmin and Helnah…. 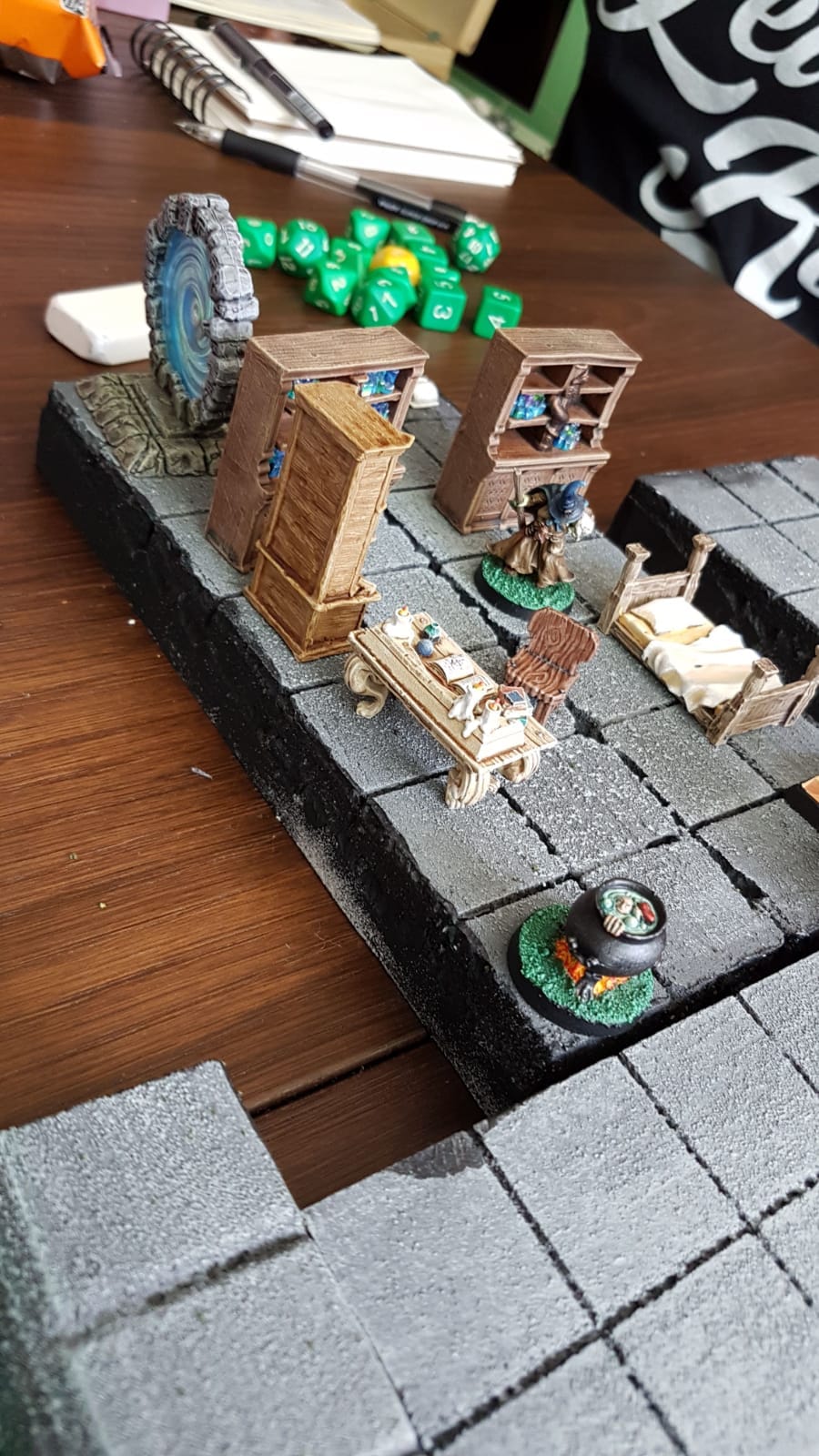 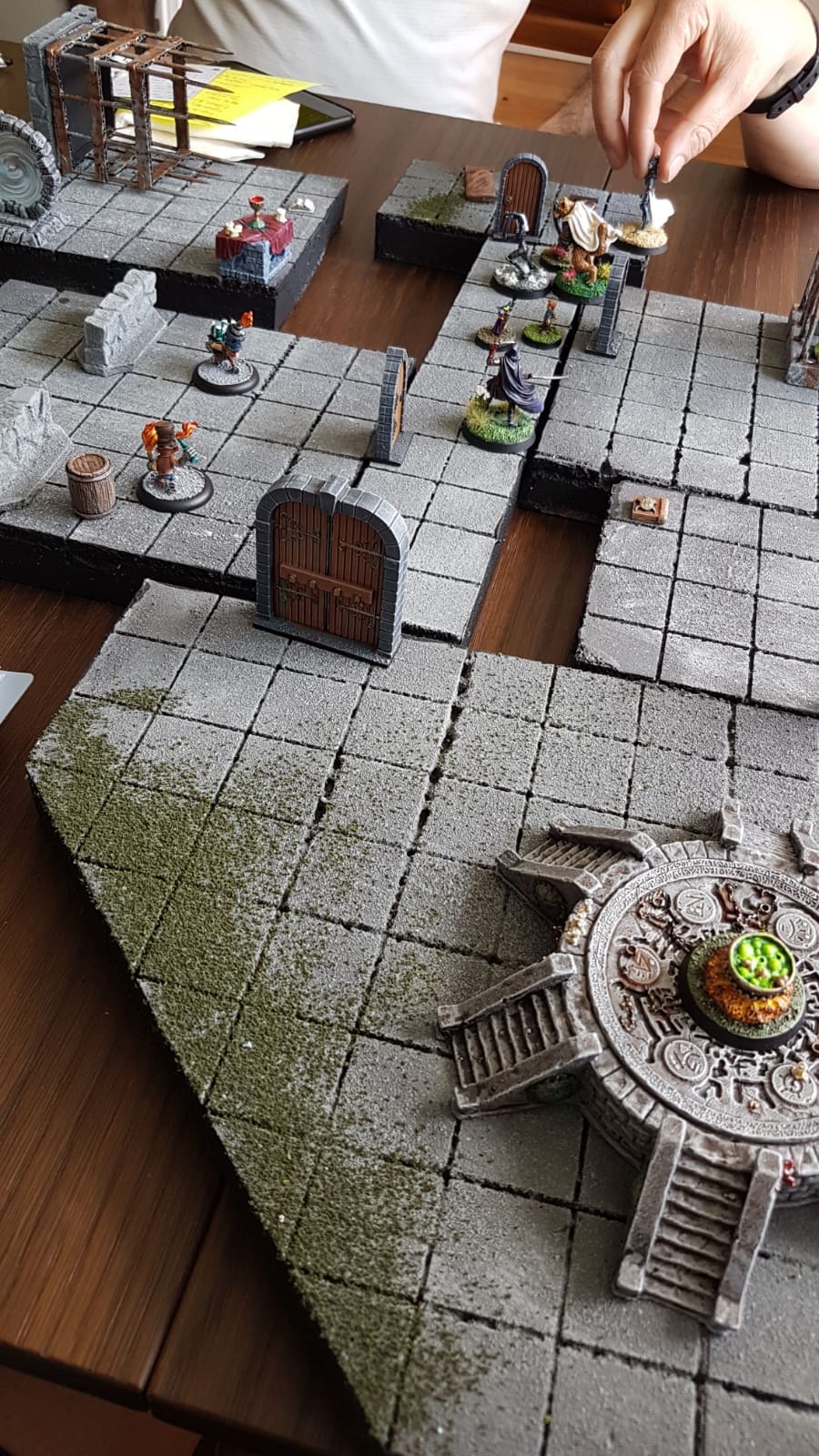 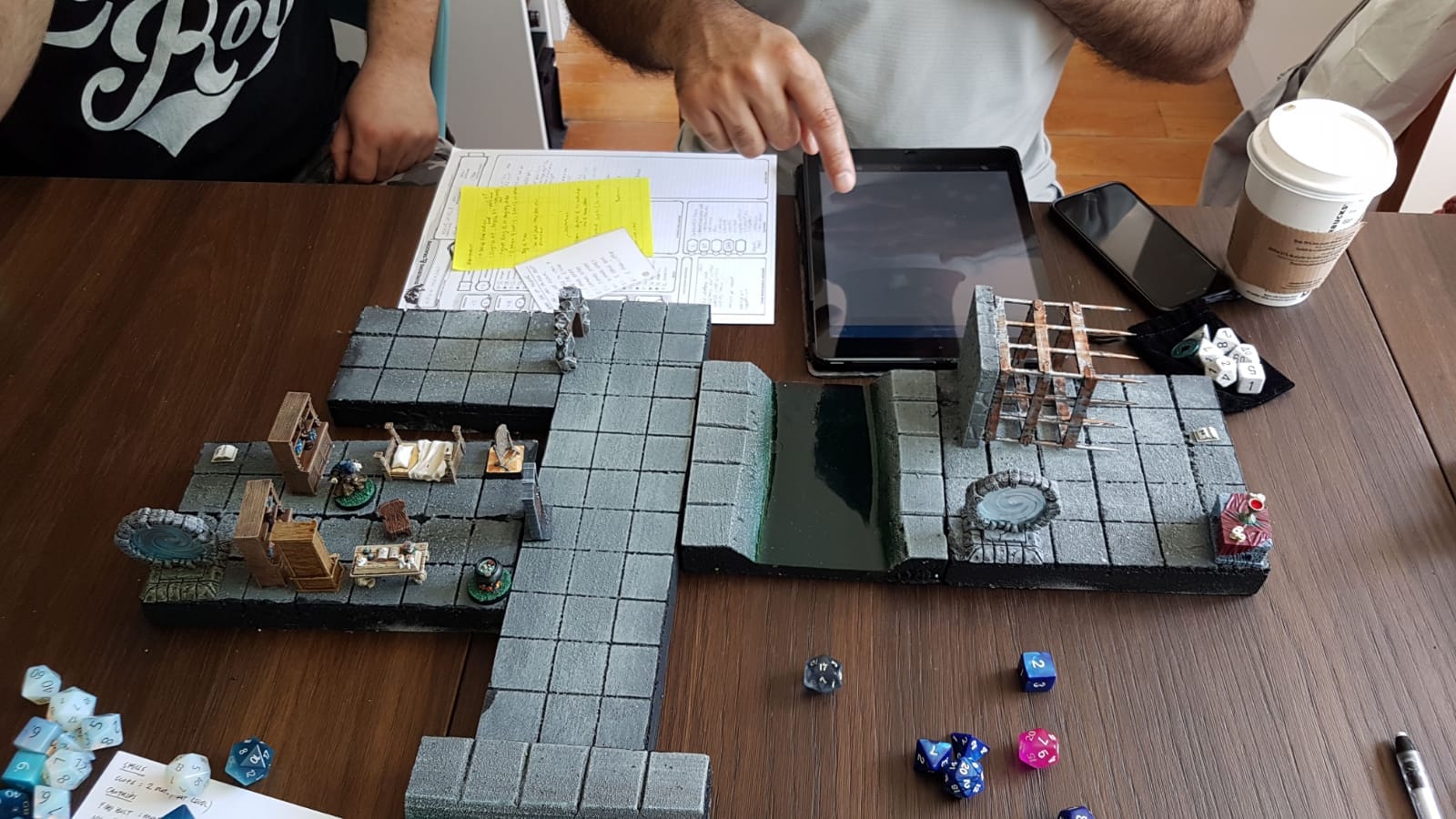 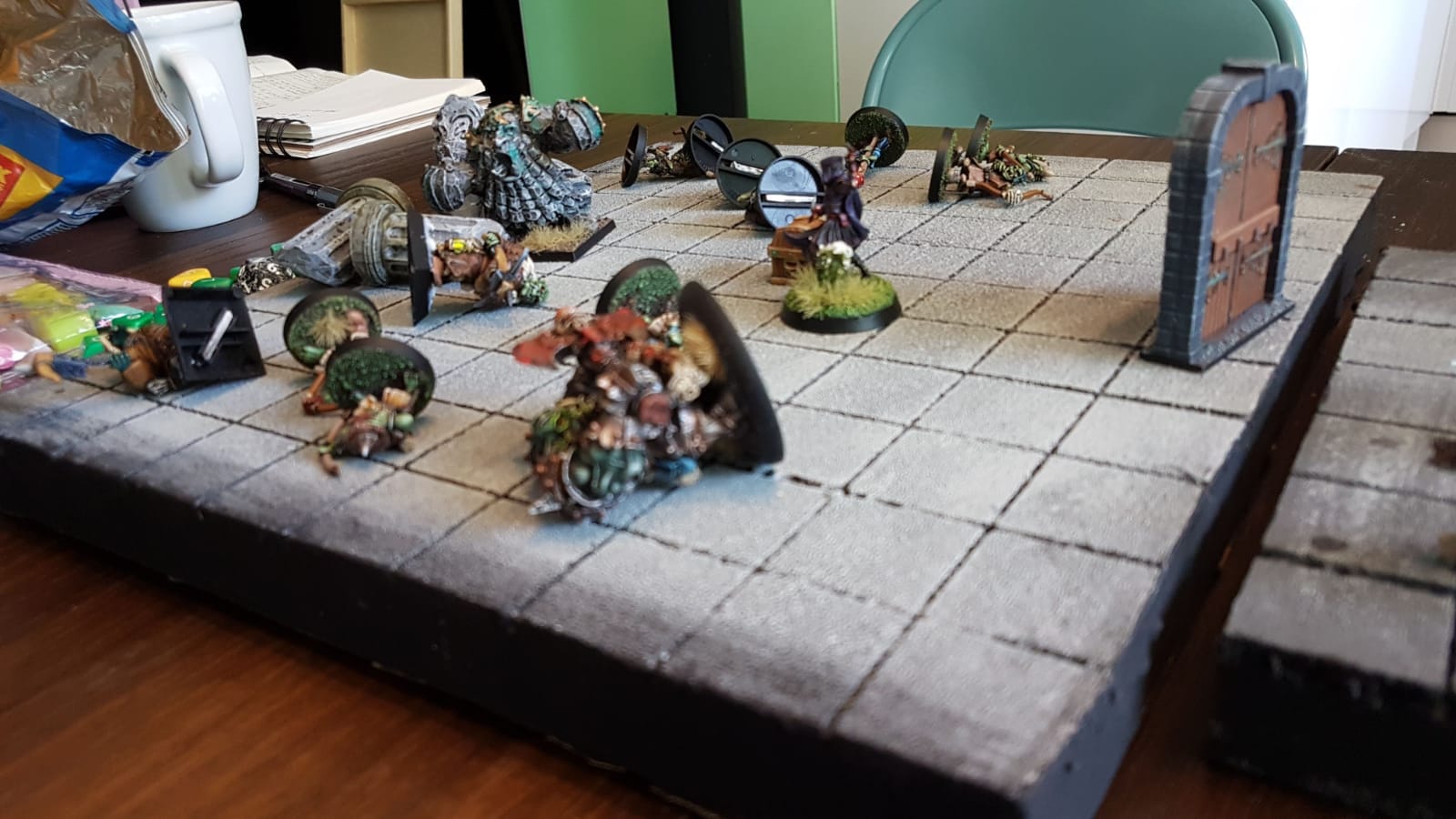 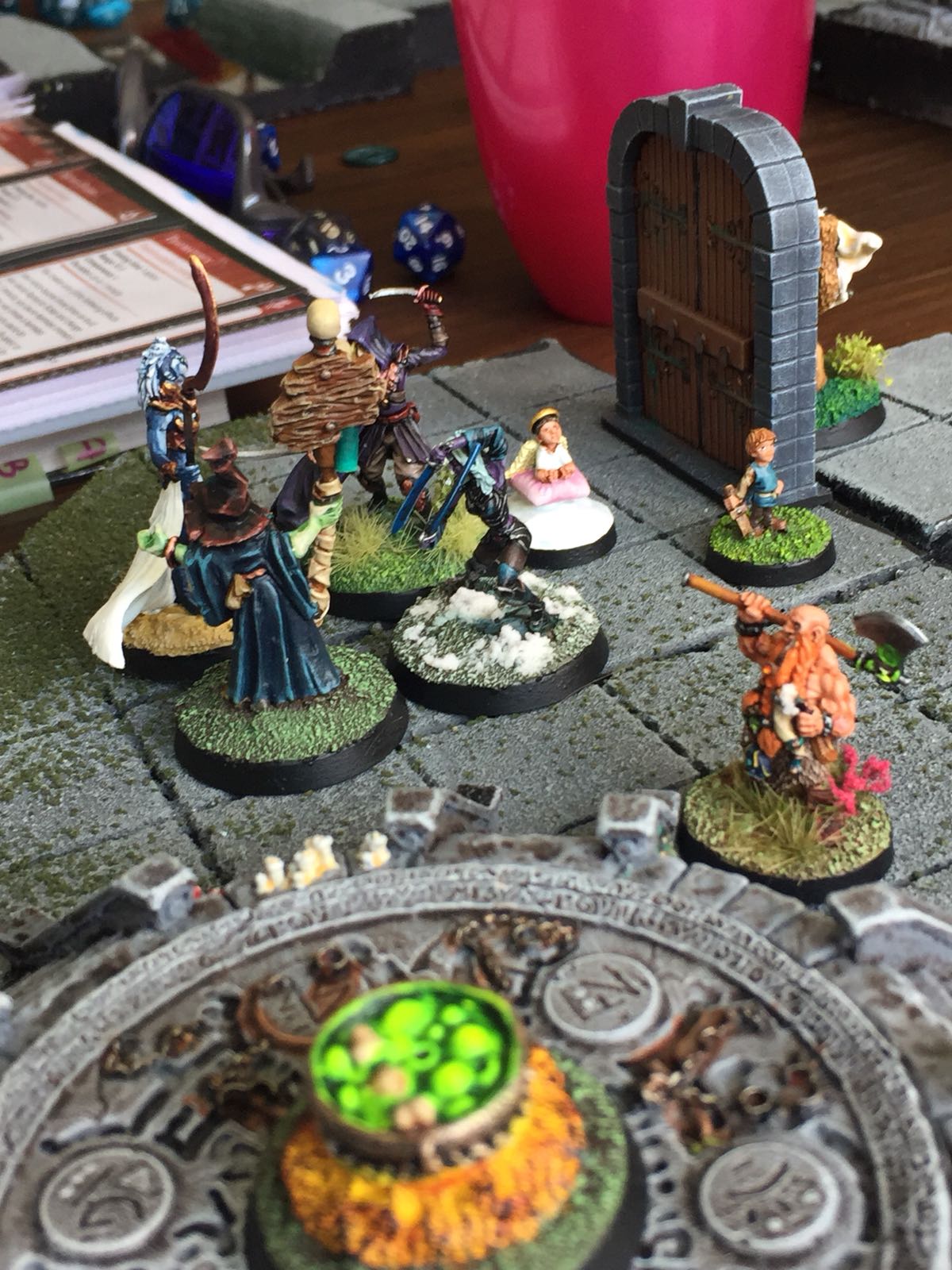 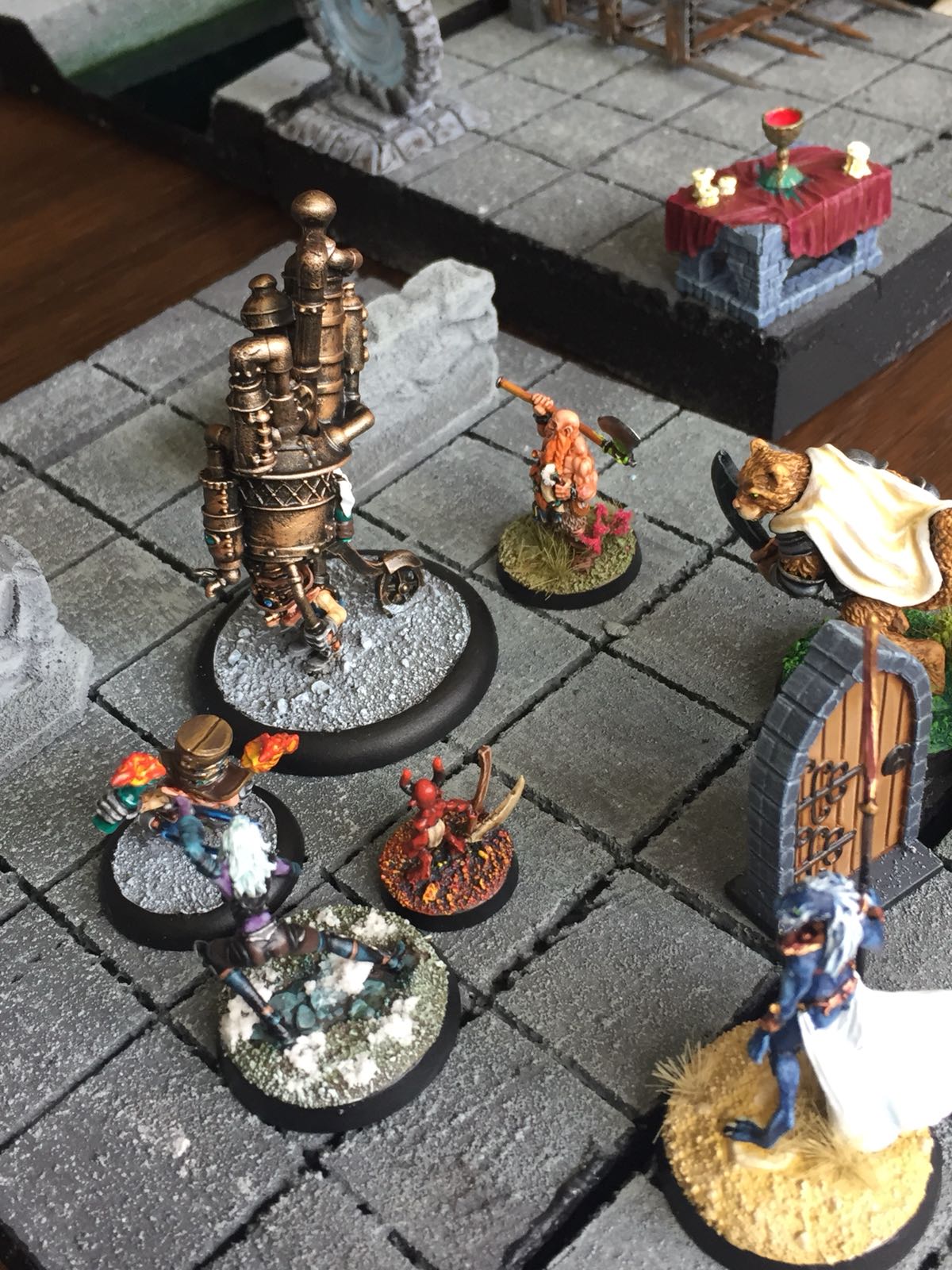 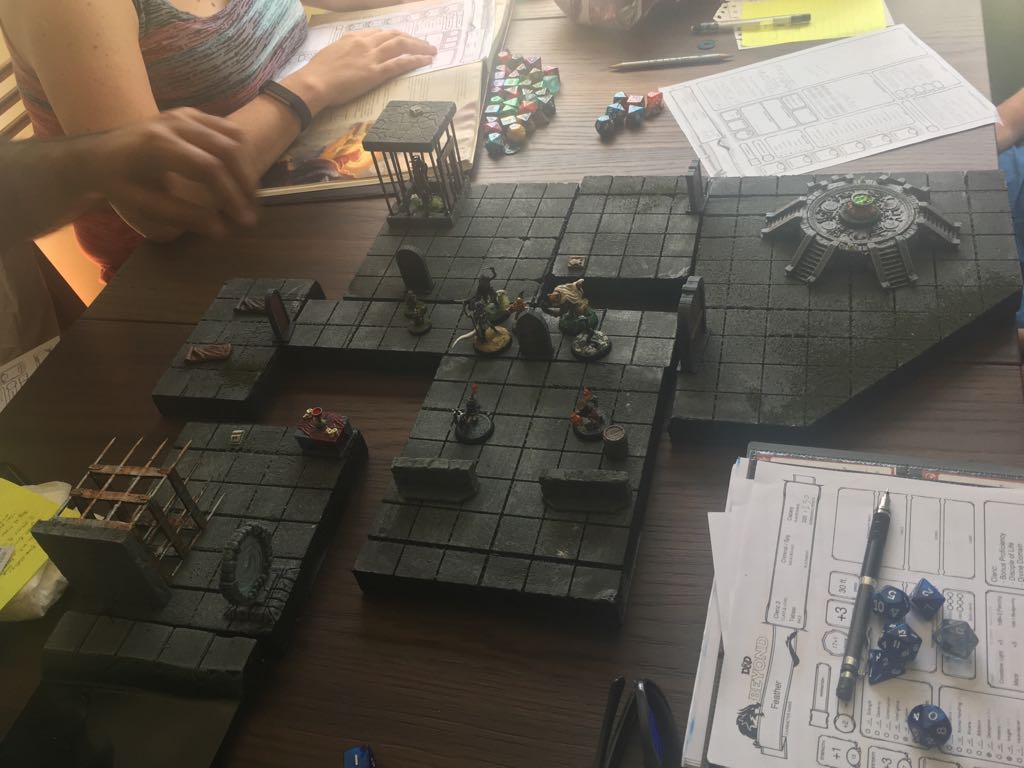 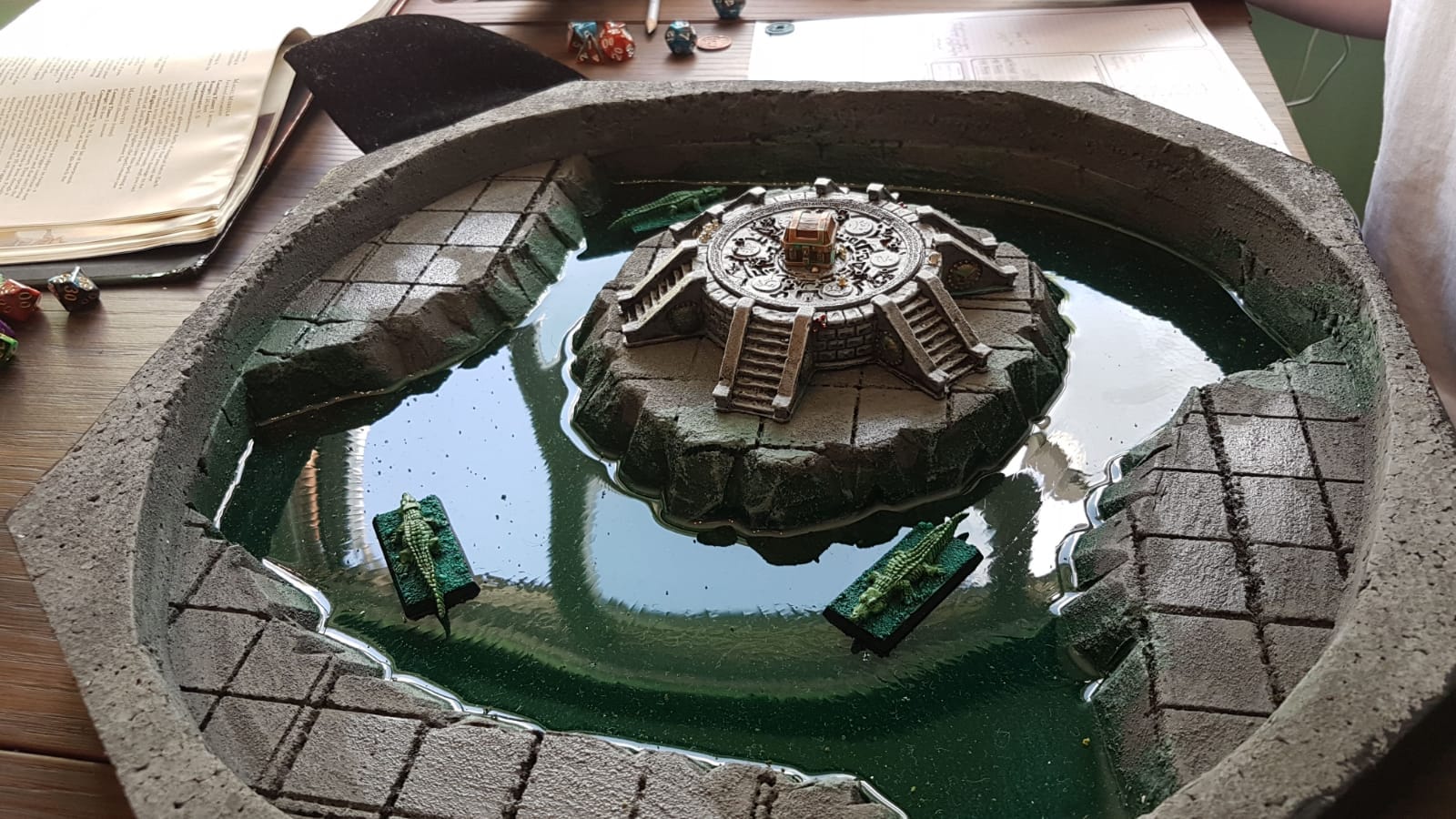 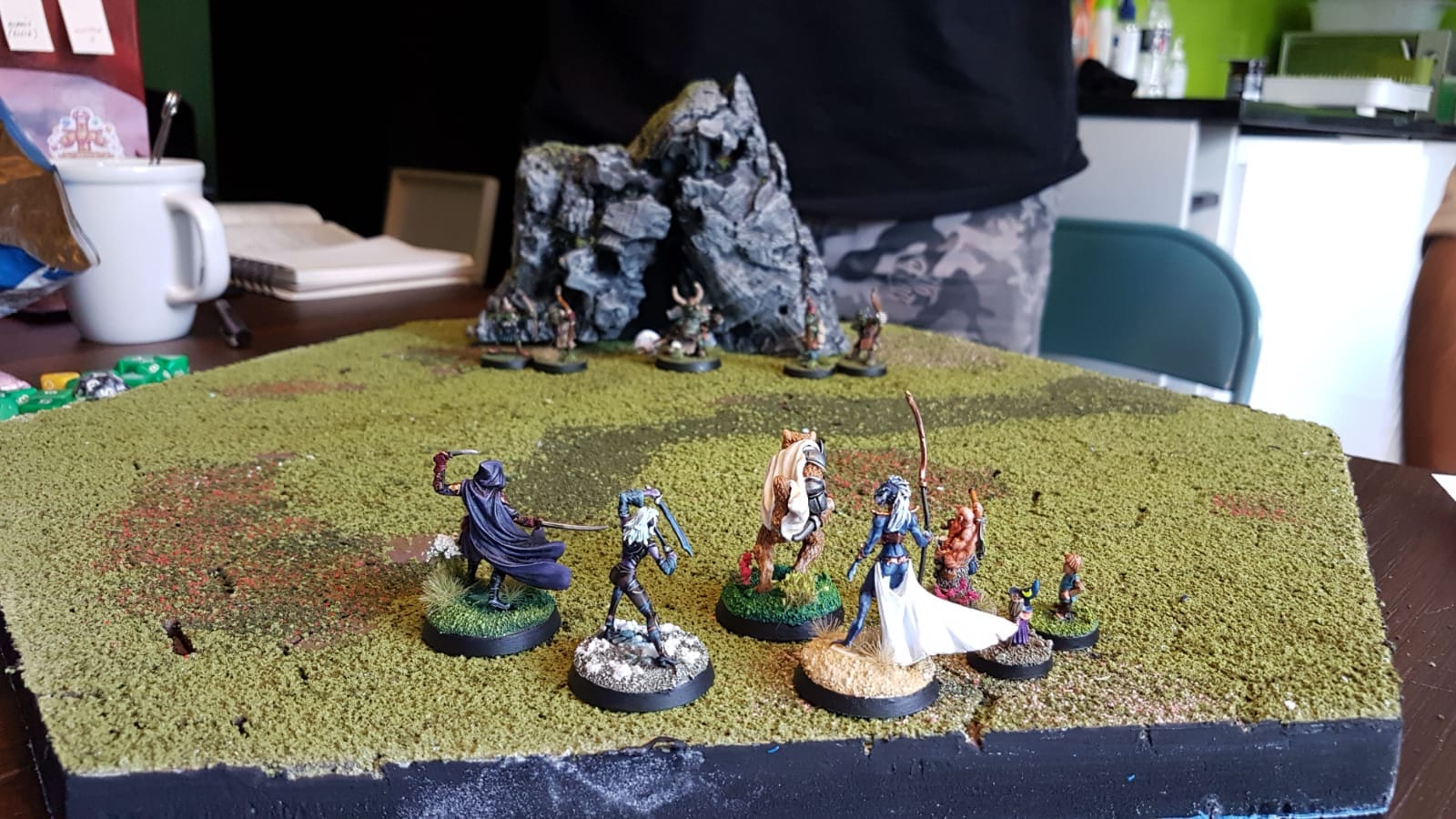 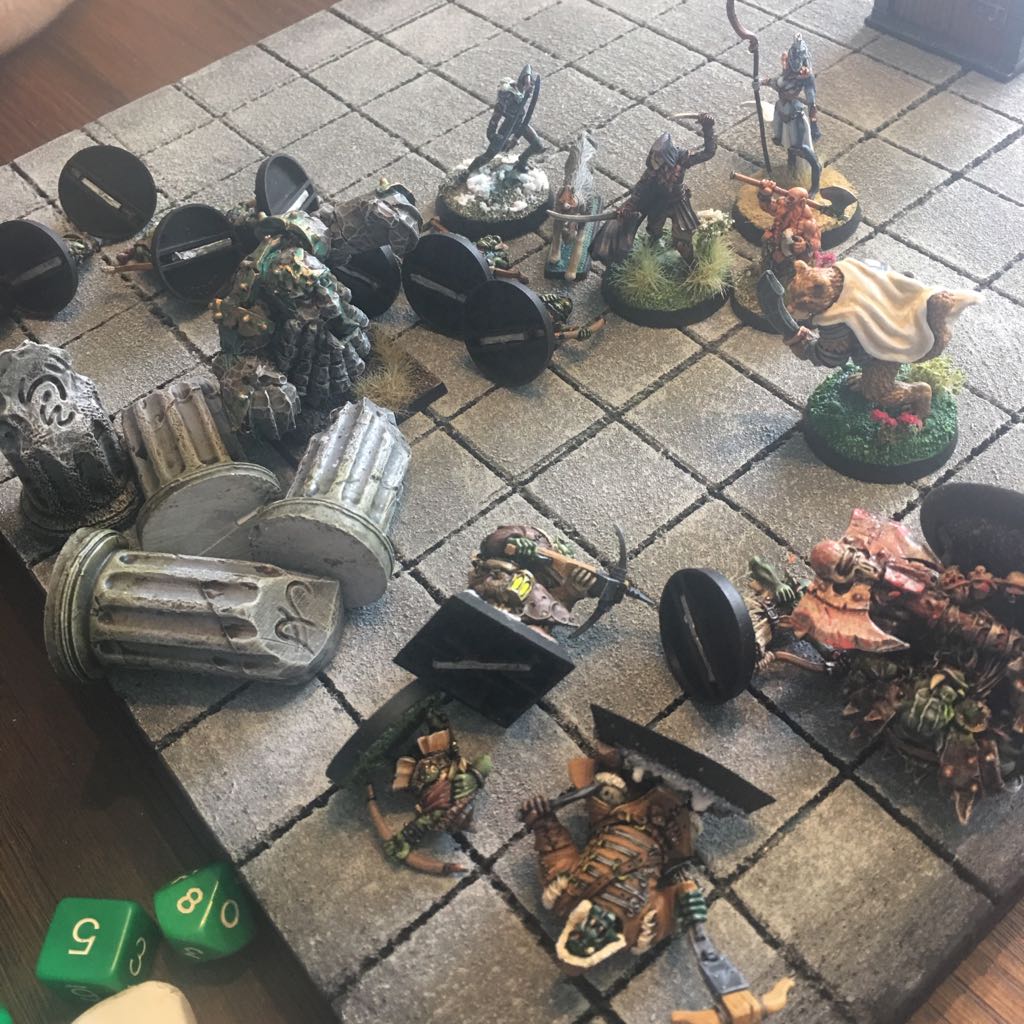 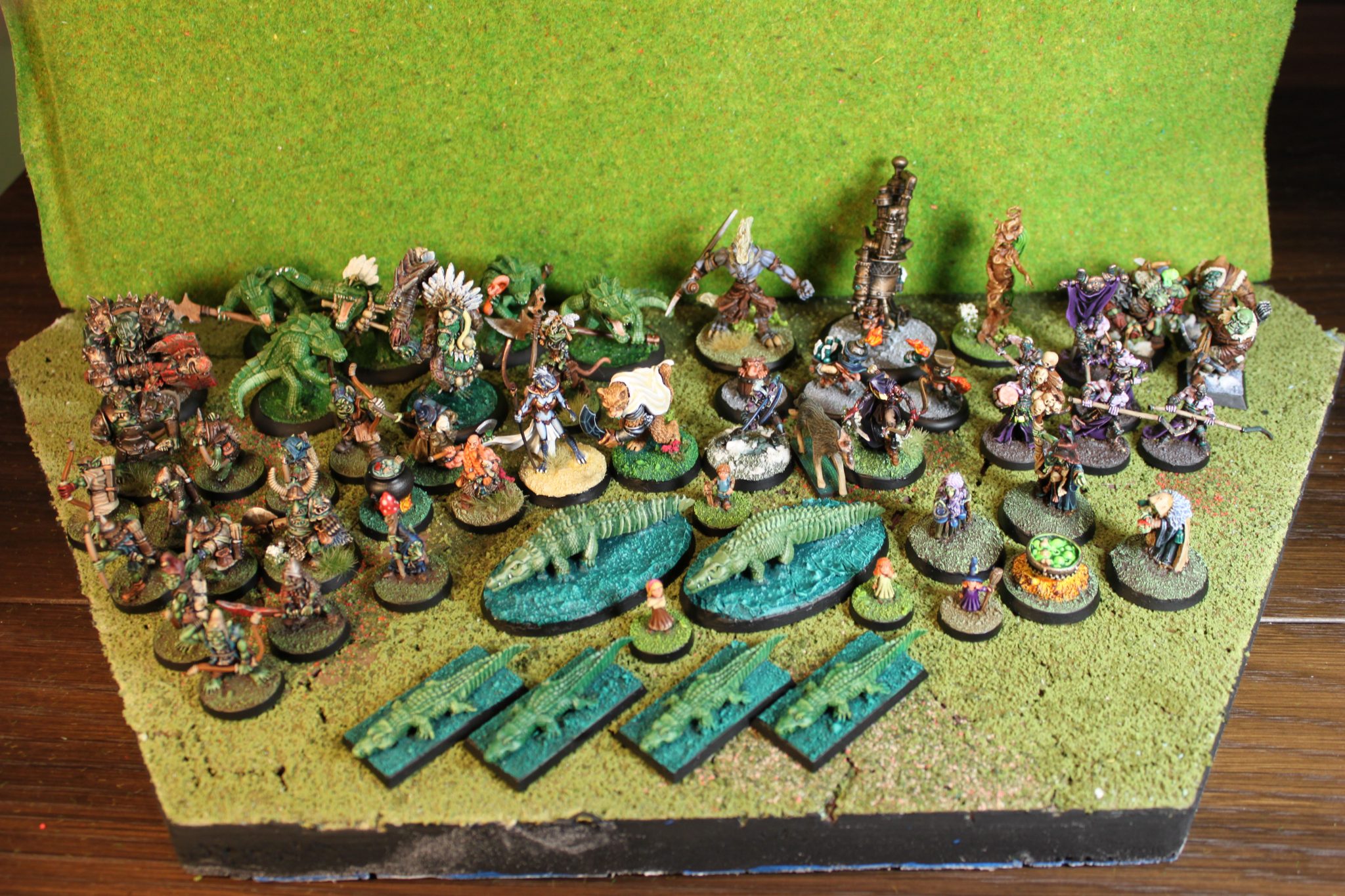 Dungeons & Dragons – Kolgor and Trackers of the Behemoth (Rackham Miniatures)