We left our heroes after they had routed the Empress Eternal in her own home. Damon the Paladin had cast Haste on Grimshaw the Dwarven Barebarian, who was now in hot pursuit of the fleeing vampire.

Grimshaw ran into the second floor of the Crimson Spire facing a hallway of doors and the wounded and panting vampire at the end of the corridor.

Too late did he notice she was not quite as vulnerable as he thought, and he fell for her vampiric charm… after all, maybe she was a friend, an ally against the Fey Forest. Why harm her?

She fled the scene as the rest of the party arrived and they found the oddly pacifistic Barbarian. While the comrades couldn’t quite figure out why the Barbarian had had a change of heart, they knew they had to move forward and Alyanys, the Half-Elf Warlock, suggested should all go and “ask the Empress Eternal how they could help her” as a trick to convince Grimshaw to keep moving. 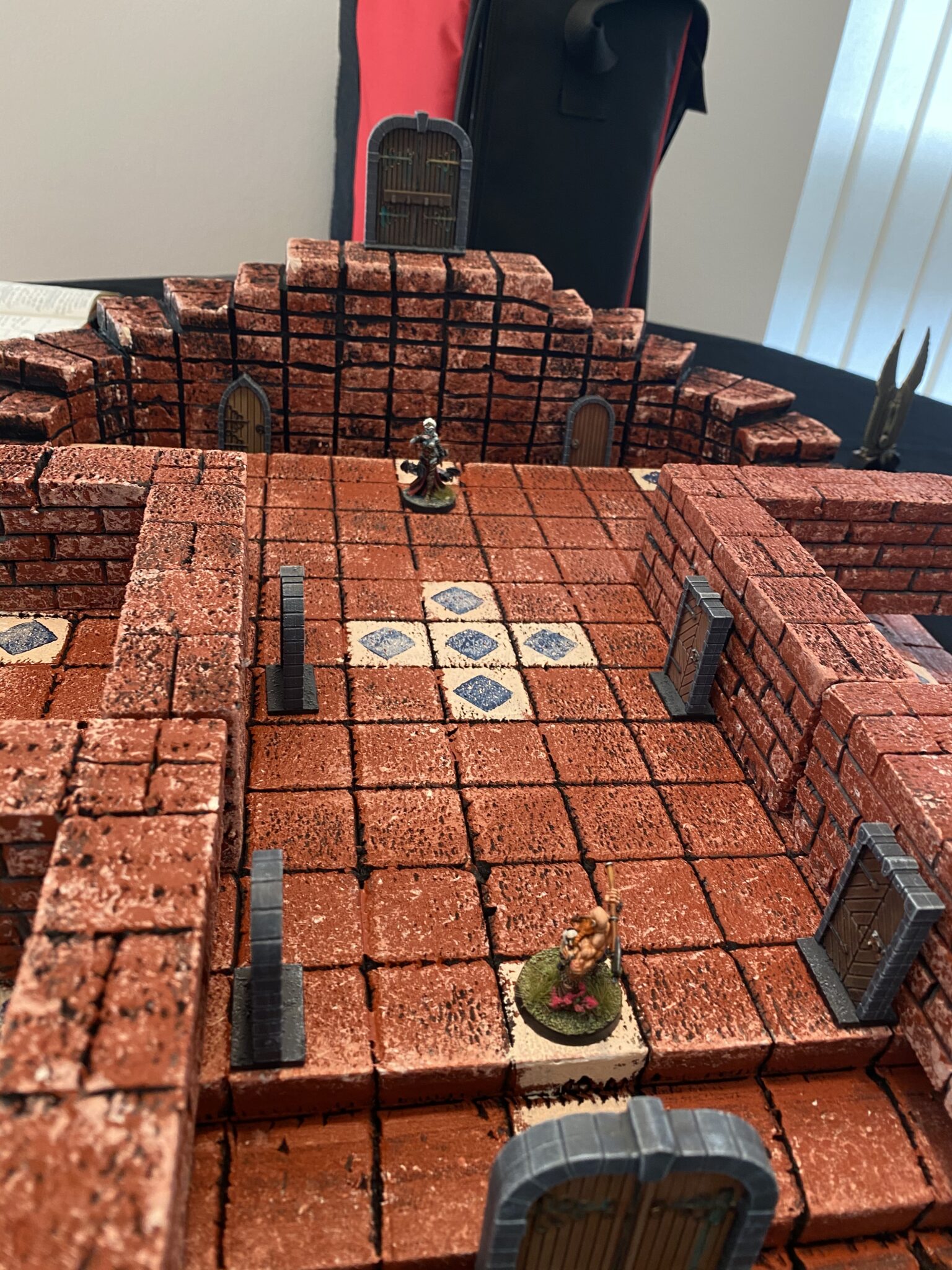 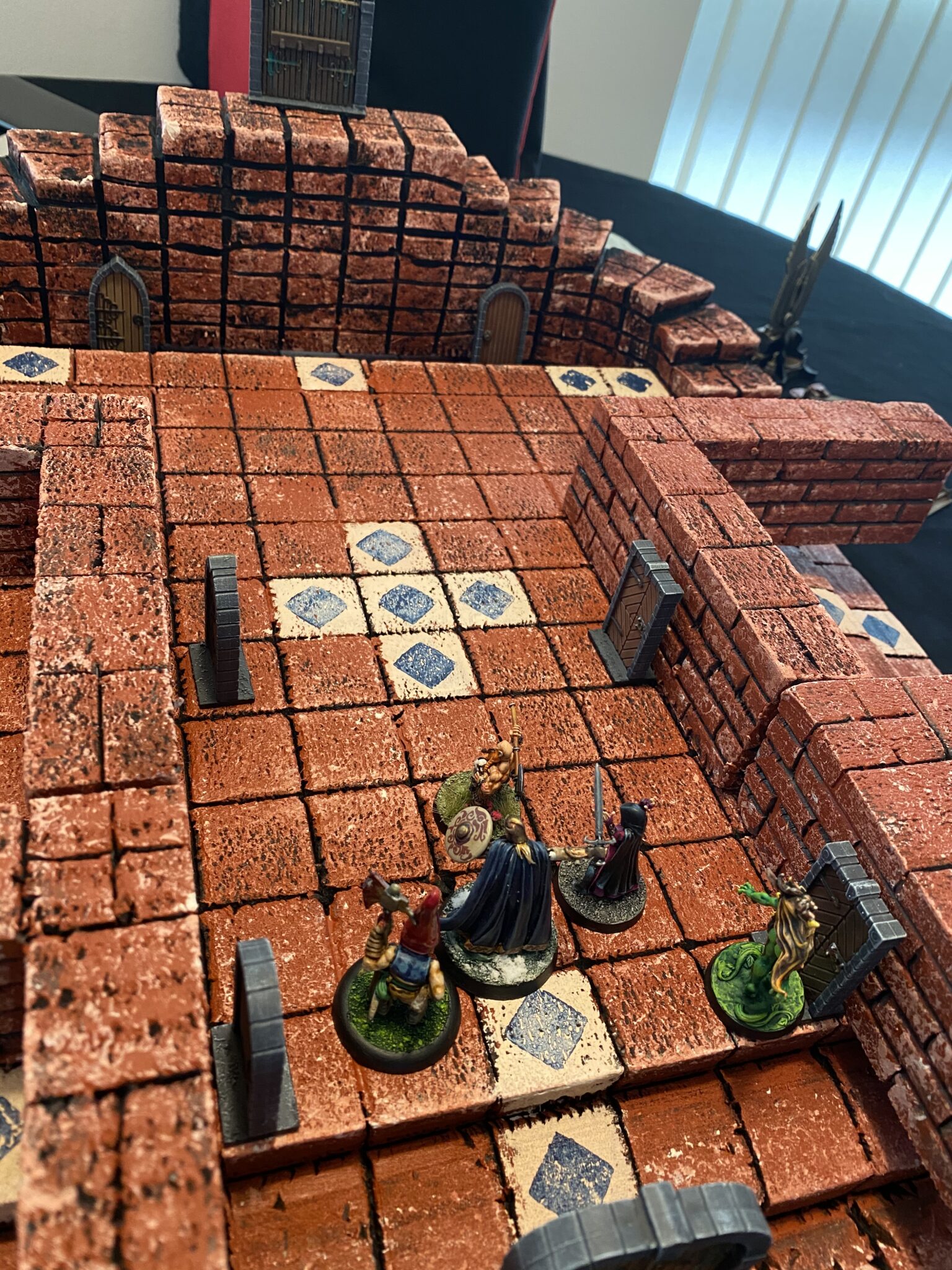 (DM note, next scene was Theatre of the Mind)

In preparation for the climb, Damon case Protection from Evil on the heroes.

The party started the long climb to the top and were attacked by an unfamiliar foe, a Vampiric Mist, who they managed to frighten away.

Half way up, they found a mirror hanging on the wall and another mirror opposite, just floating in the air.

The heroes made it through unscathed, but their fey helpers were helplessly sucked into the mirrors.

(DM note, the mirrors were there to protect the Empress from a Fey riot and from invisible foes climbing the stairs)

Further up, the party was ambushed by the same Vampiric Mist. It chose its target at random, attacking Grimshaw, which was a stroke of luck as it meant he could reroll the vampiric charm he was under.

Add to that, the Protection from Evil, gave Grimshaw the boost he needed to break free from the spell.

Finally they reached the top and stepped up through the trap door. 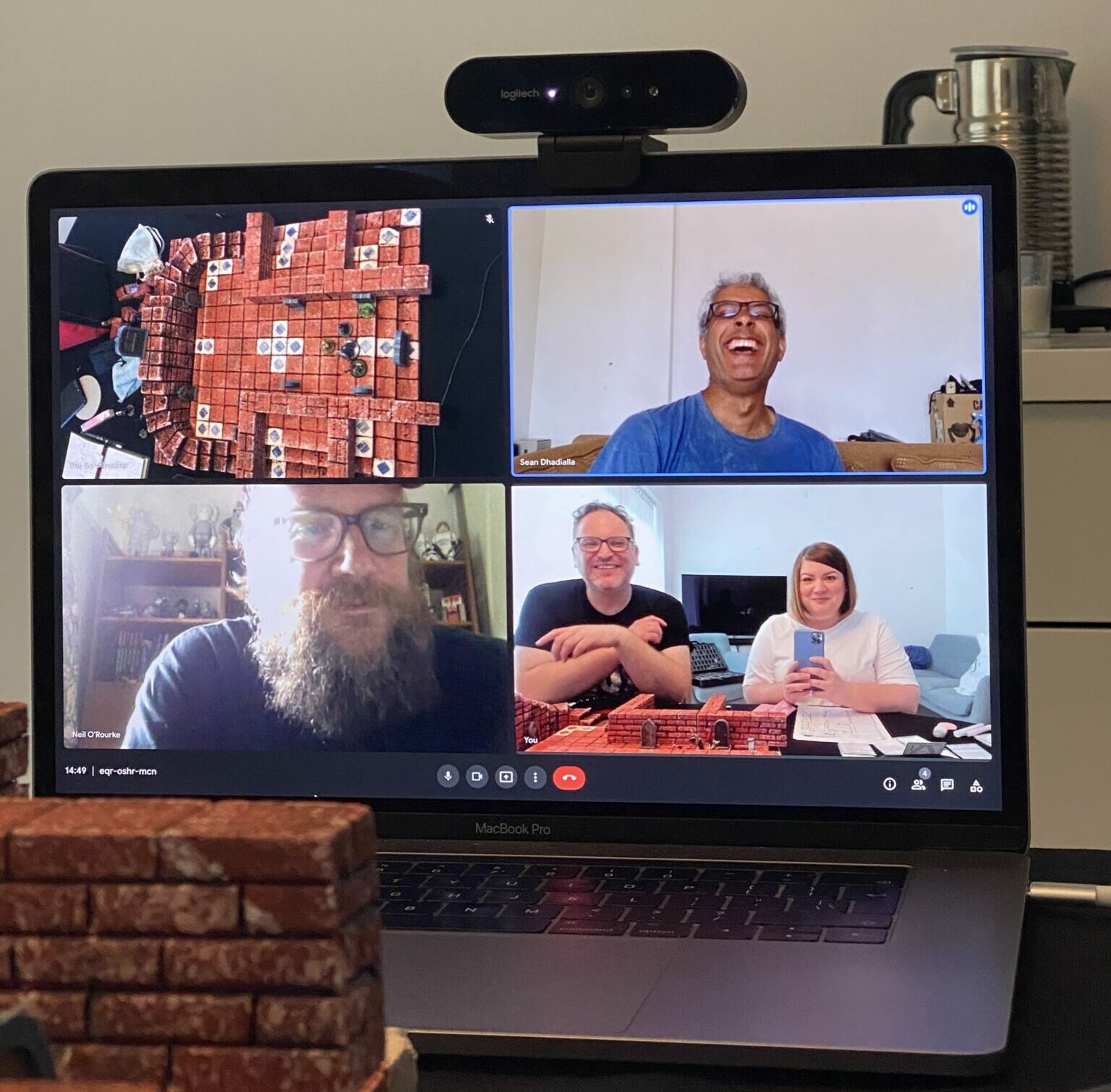 Fight at the top of the Spire

To their surprise, the party did not find the Empress Eternal. Rather, they faced three Winter Wolves circling a massive hole in the floor with a deadly fall. 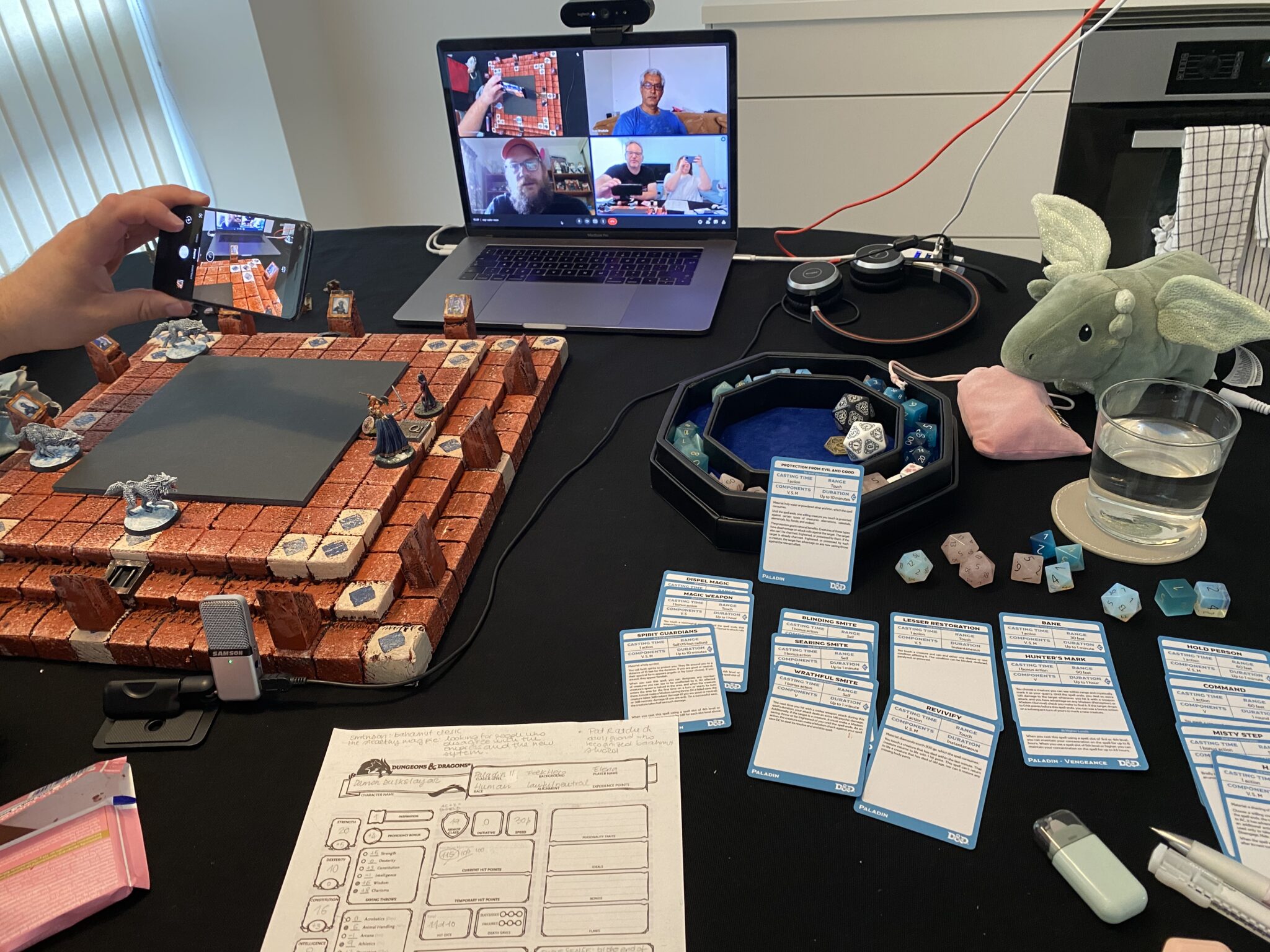 The room had no other ways out and the walls was covered with jars of formaldehyde and body parts. It also had 12 paintings of the Empress Eternal.

As the heroes battled the wolves, they found the paintings could shoot lightning and dispel spells. They also quickly learned that one wolf was no other than the Empress herself and the fight was on. 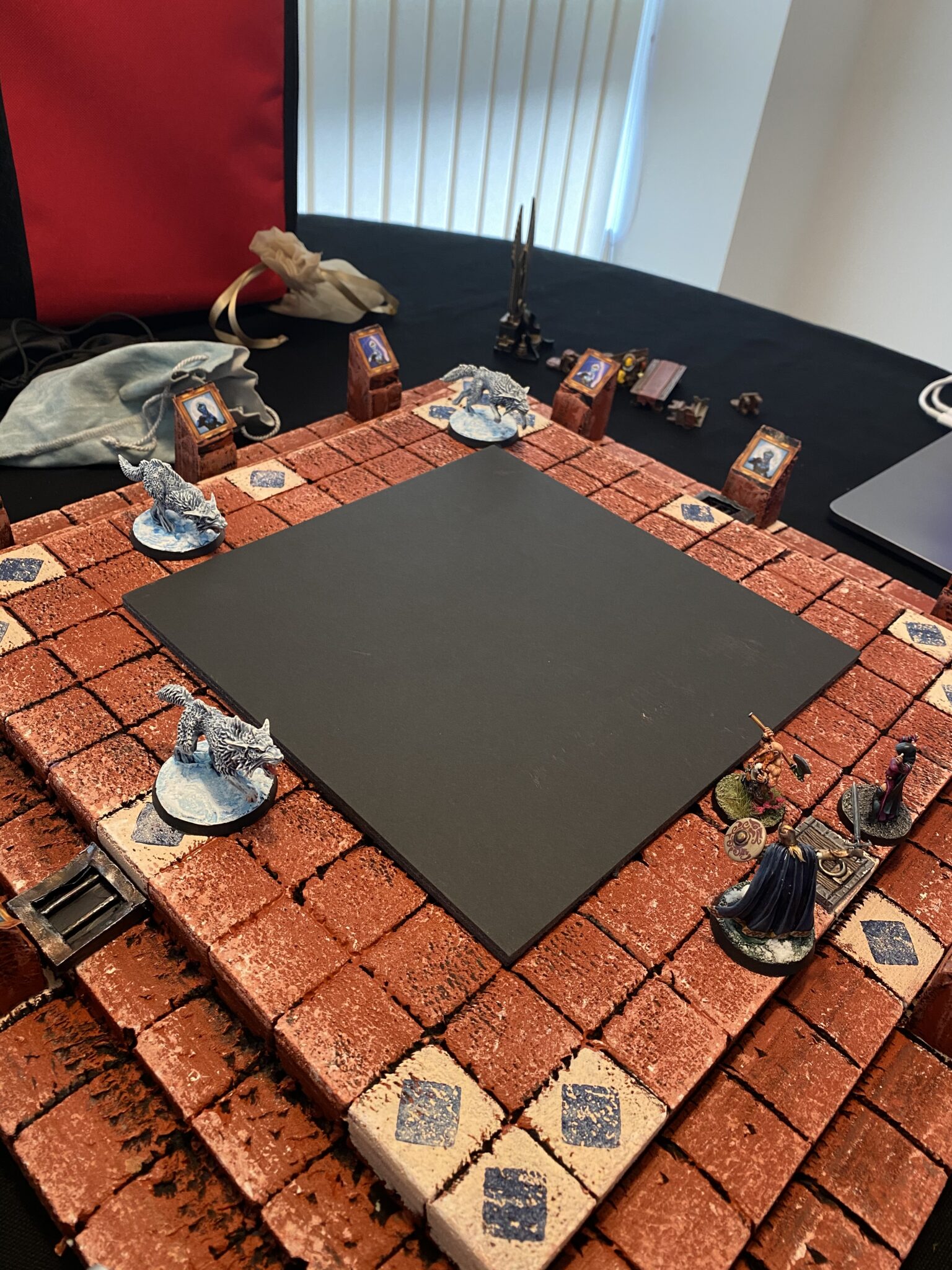 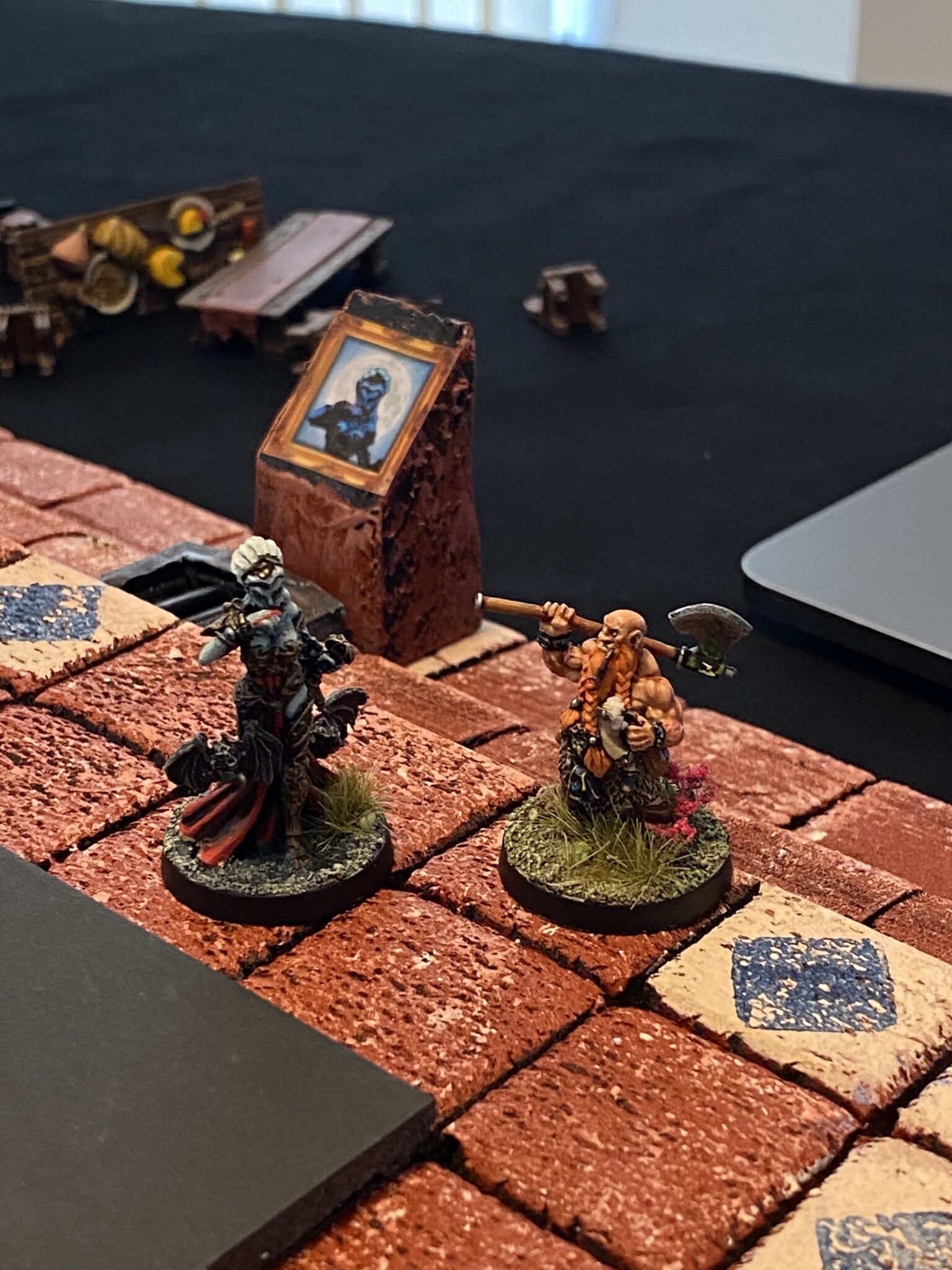 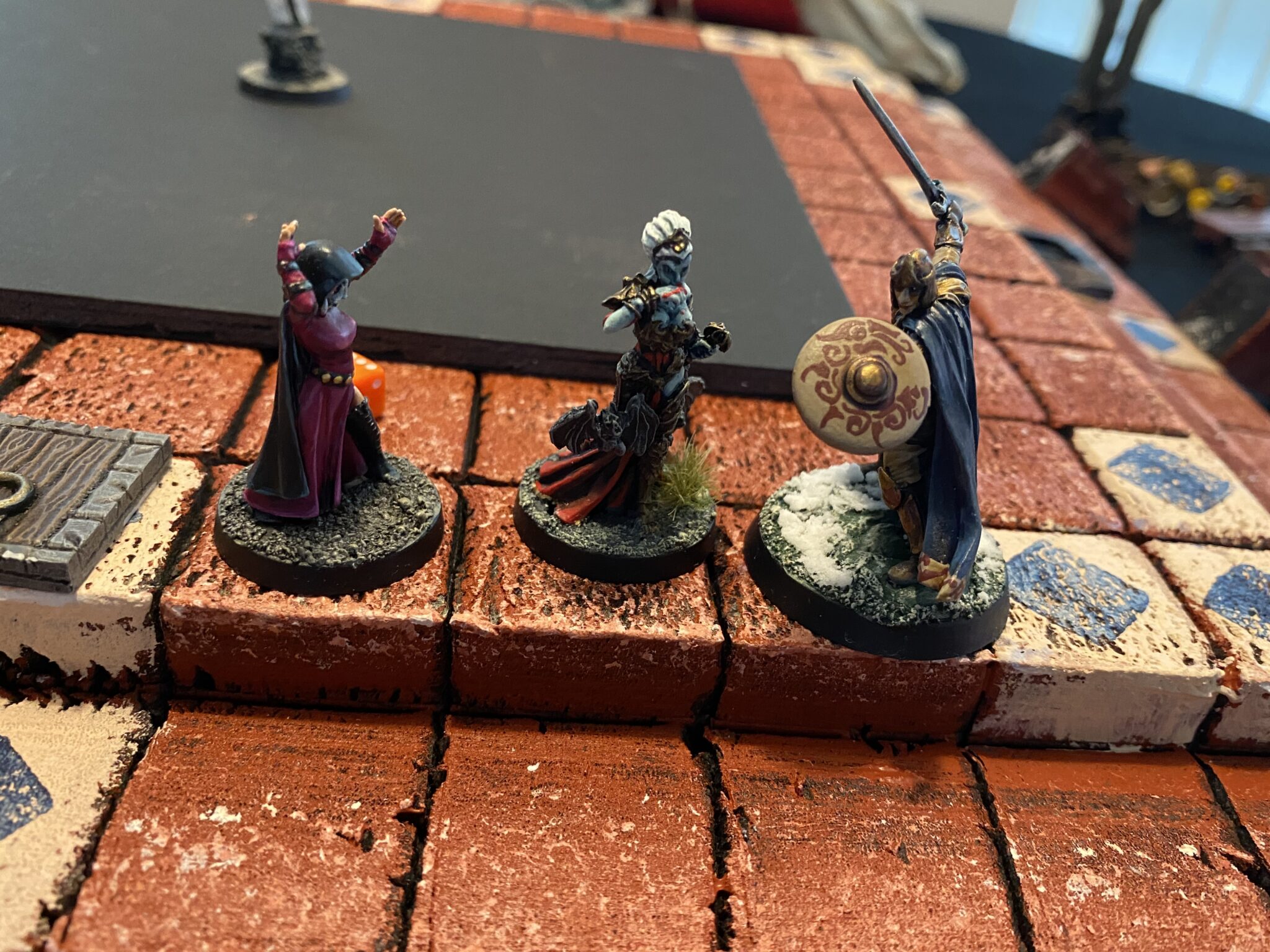 And it was made worse by a Brain in a Jar appearing causing disruption and damage. What was worse was that the brain in the jar, was from their old battle brother:  Jean-Jacques La Cour. 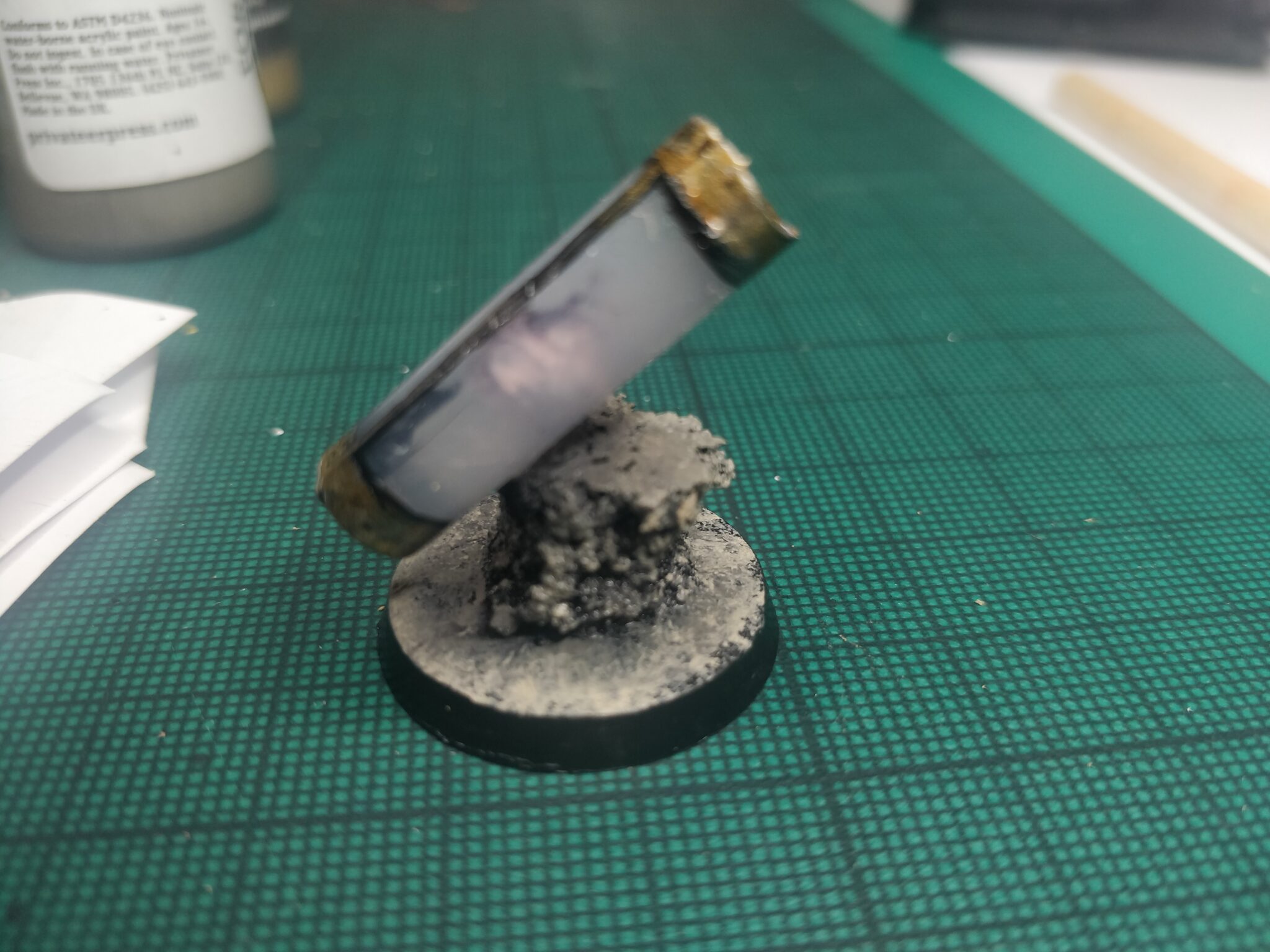 It was a long and tough fight and it started to look like the heroes might not make it, but then the tides turned and they combined their efforts with Alyanys bringing down the blood thirsty foe once and for all. 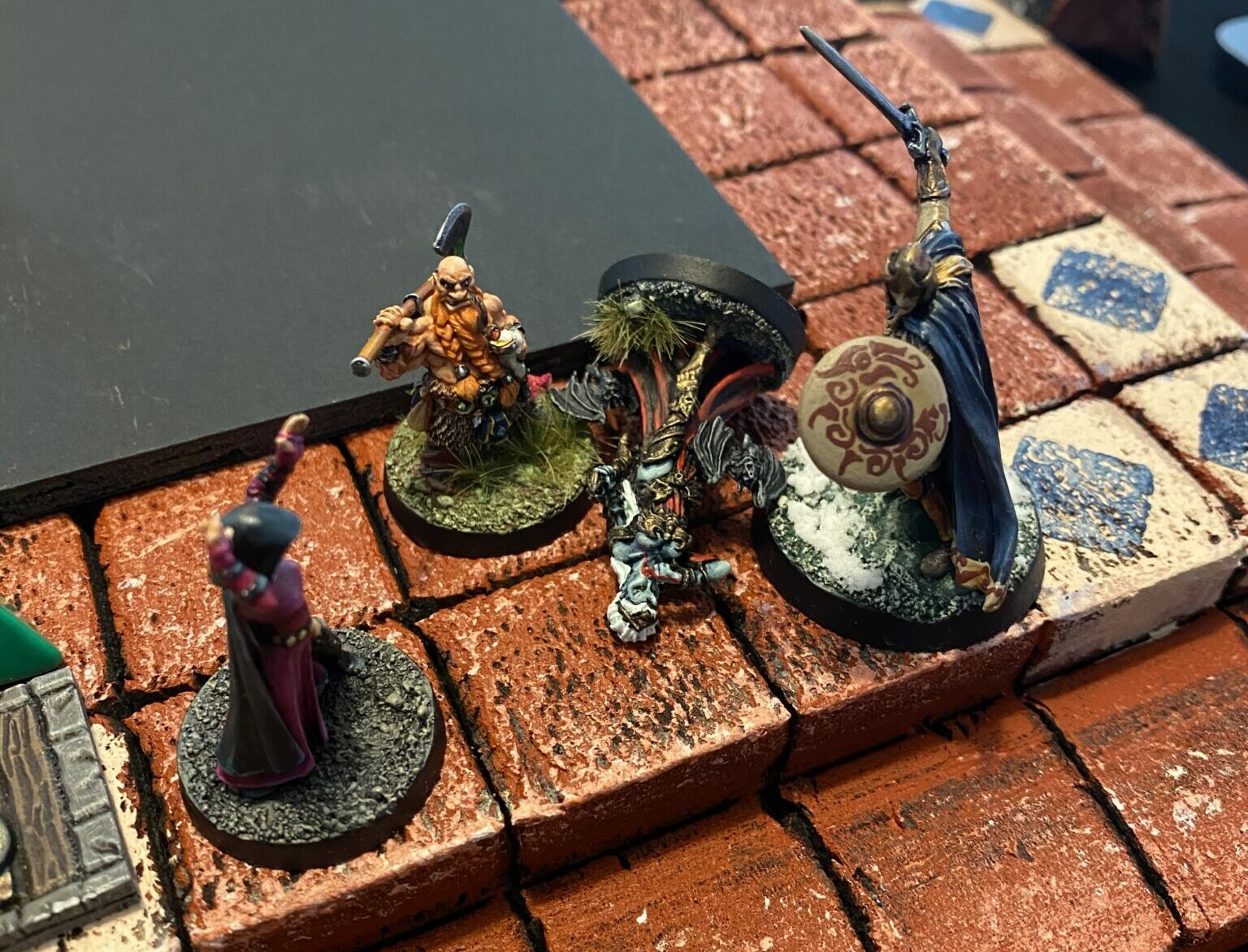 …or so they thought!

Having not spent a huge amount of time researching Vampires before entering the Crimson Spire, they party didn’t know Vampires would not die unless they had a stake through their heart.

Fortunately, the brain of Jean-Jacques was now lifted from the Vamperic Charm as well and urged the party to find the coffin of the Vampire before she regained her power.

Rushing down the stairs, following the Divine Sense of the Paladin, the party kicked in a few doors in on the second floor, only to find a Vampire Spawn couple engaged in carnal activities. 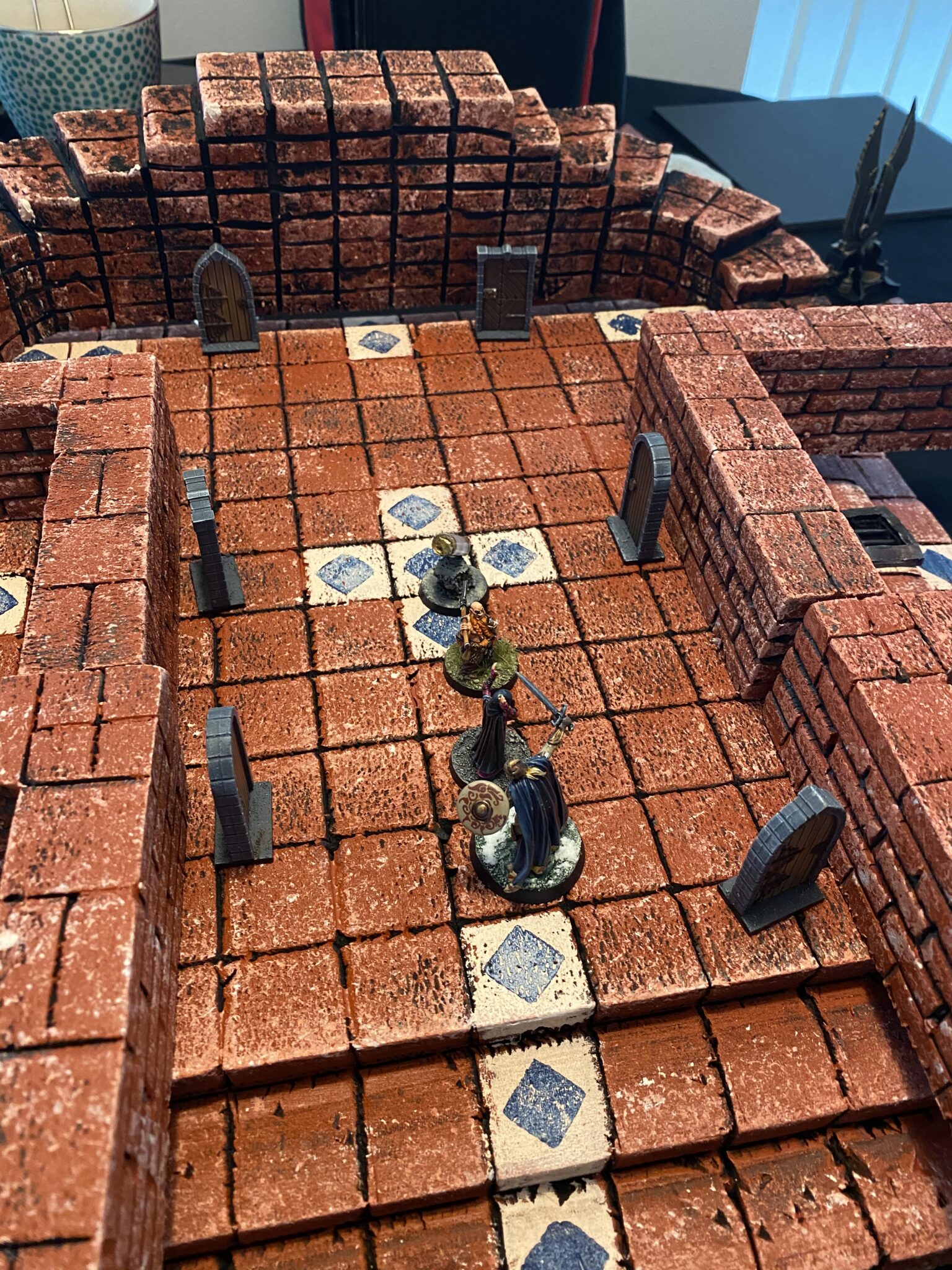 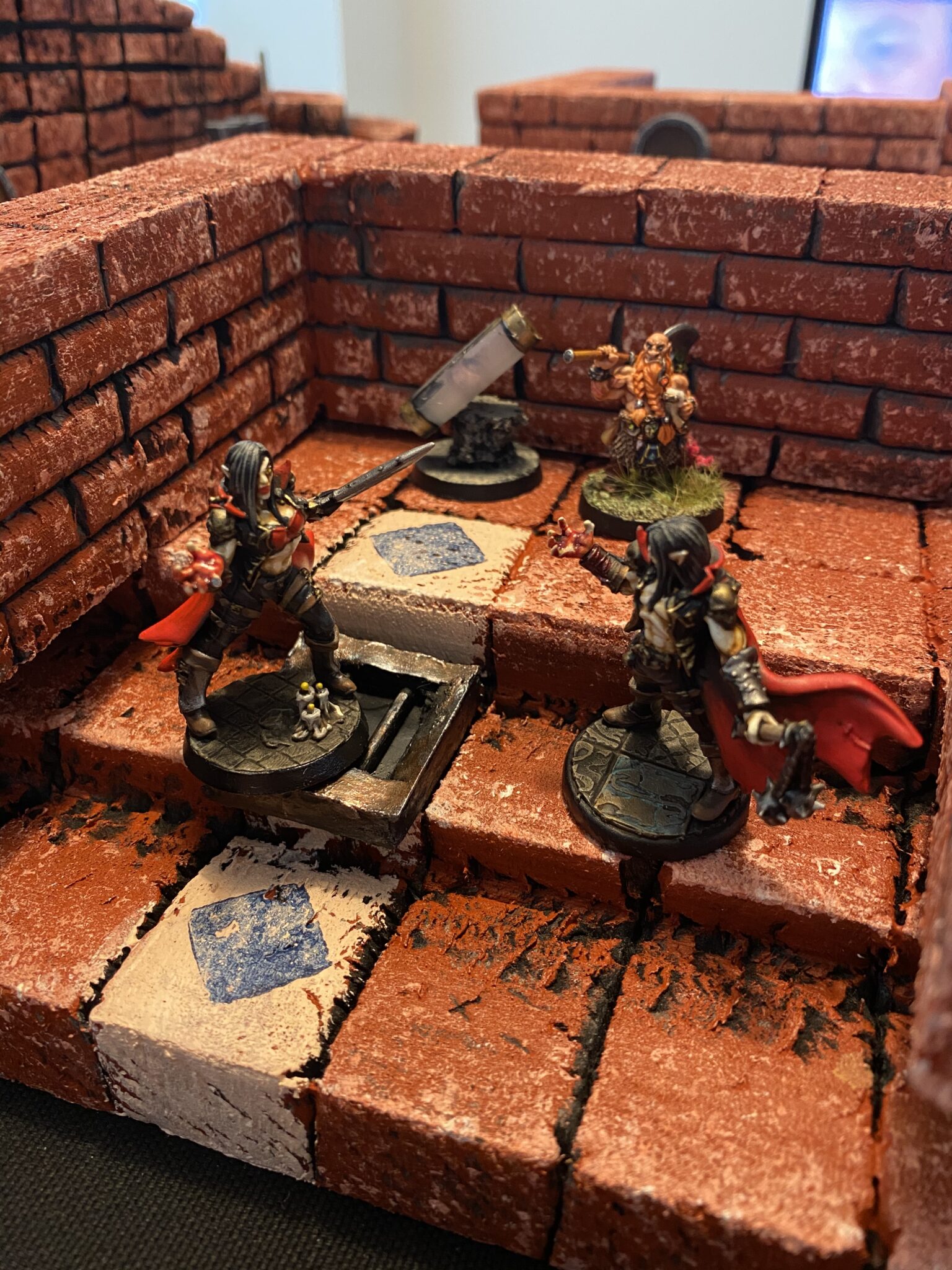 After a quick fight, the party dispatched of the Vampires (with the help of Jean-Jacques) and kept going down.

Investigating the floor in more details, they found a cloak room and here Alyanys found a service elevator, which the party took down to a horror of a combined food chamber and sleeping place for the mind numb servants.

Frustrated, the party searched the floor to find a way down and in the end Grimshaw found a drain hidden by an illusion spell and the party went down to finish the vampire once and for all… or die trying!

The drain led down to a small chamber help up by four pillars with a stone sarcophagus in the middle and a big Stone Golem standing watch motionlessly. 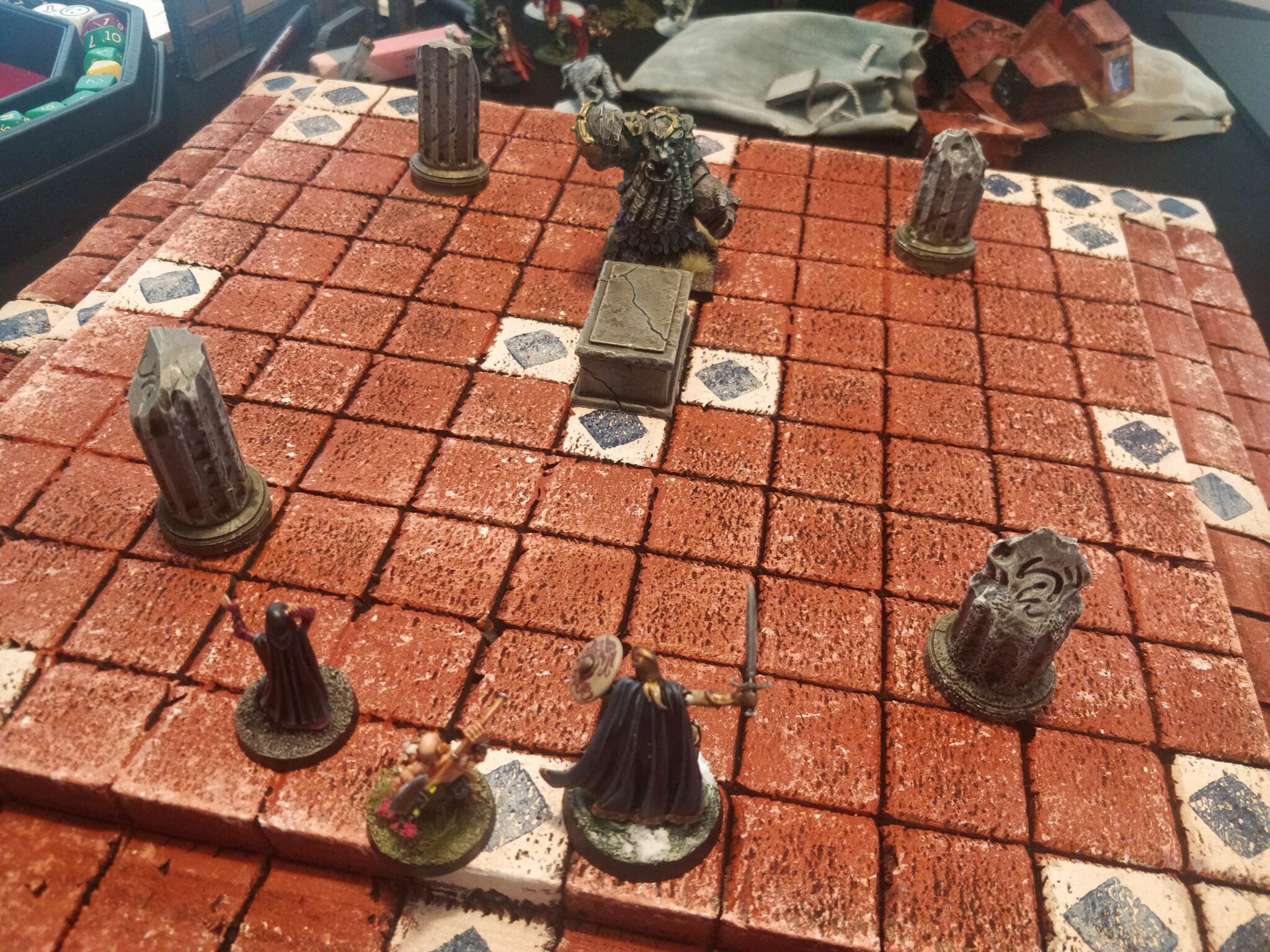 But the experienced heroes hatched a plan on the fly.

Damon cast Haste on Grimshaw, who in turn ran over and place his immovable stone on the foot of the Stone Golem and legged it after taking a quick hit. 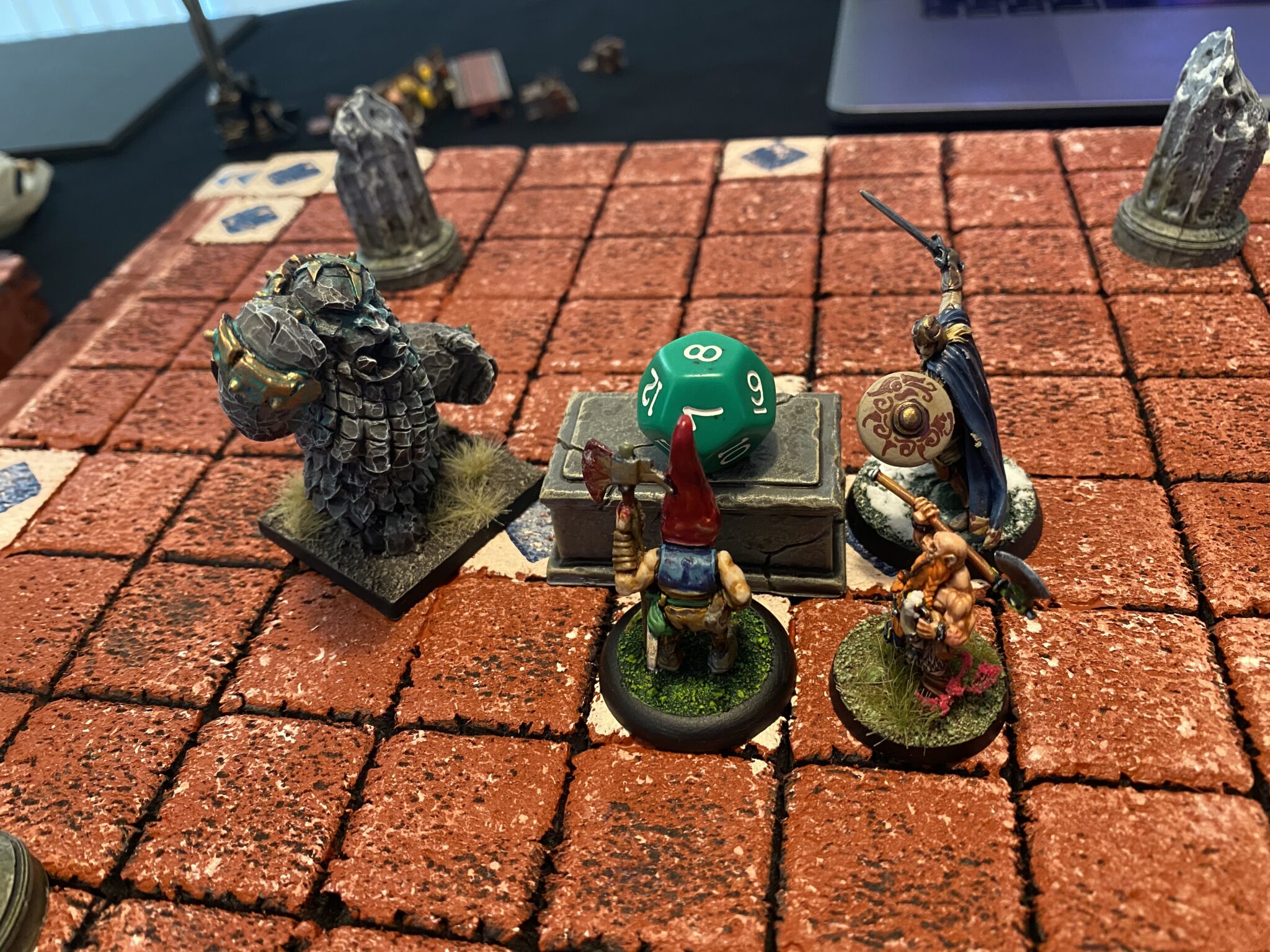 Then the party started to push the lid of the heavy sarcophagus, while the Golem started to break his foot off (and with a nat 20 that happened fast) then started to hit on the heroes.

But it was too late.

They had managed to get the lid half way off and Grimshaw picked up his immovable stone and put it on the lid to tip it open, Damon, not wasting a second, broke his last Javelin on his need and jammed the sharp wooden stake through the Vampire’s heart pinning forever in eternity.

With the Empress Eternal incapacitated, the Crimson Spire (which was in reality was a Domain of Dread) started to collapse and the already tired and wounded heroes ran for their lives.

As they ran outside, they realised the who tower, the Aura of Death and everything odd about the whole area was being sucked right into the ground and they barely made it safely away before the massive sink hole was covered with water.

It was finally over. 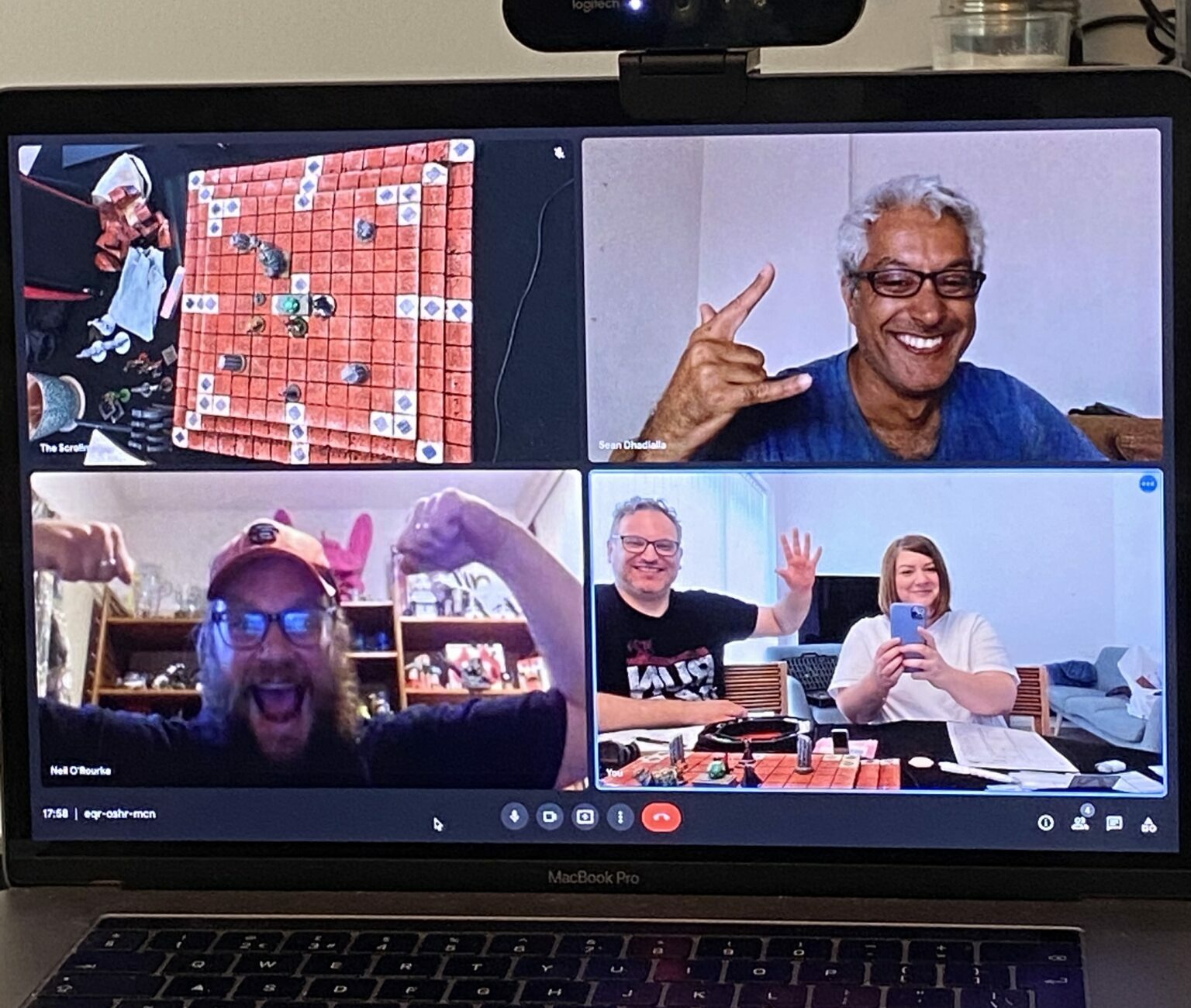 All good things must come to an end 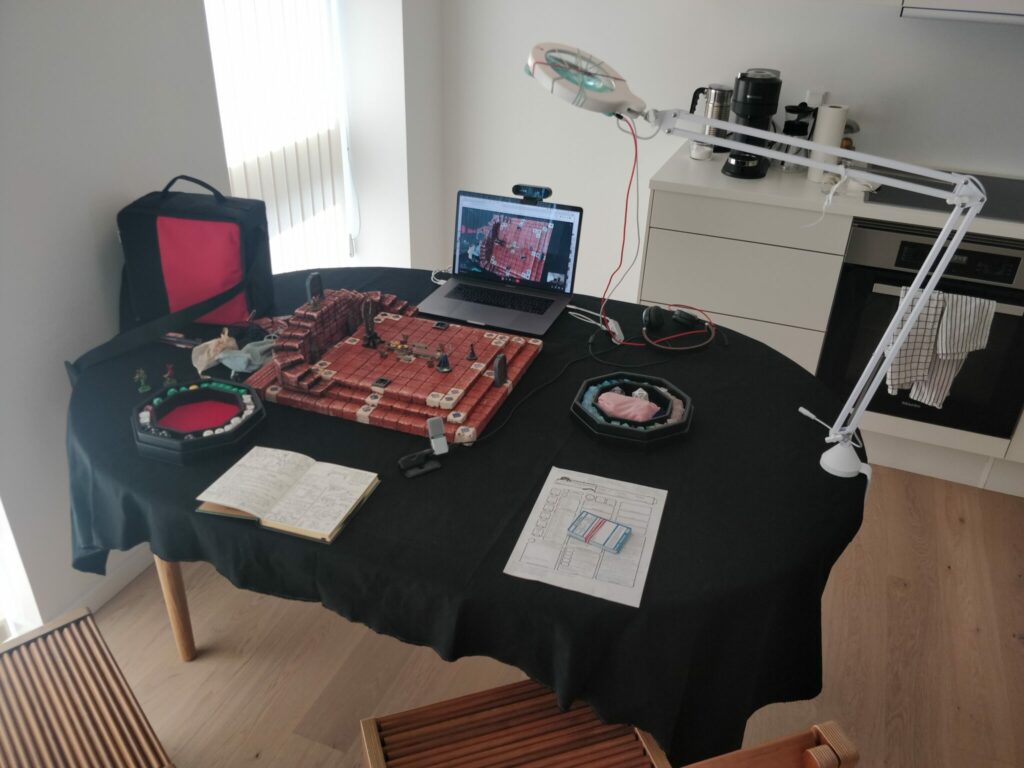 The Fey Forest retracted its attack and the Arch Fey approached the party and kept their promise of sending them back to Daisygate in their own timeline.

Appearing in the middle of the market, with no fanfare or even as much as raised eye brows, the heroes had returned in an instant.

Wearing and bloodied the looked at each other in silence before Grimshaw spoke up:

“Right, I am going to get pissed!”

And with that, our heroes disappeared into the crowd.

After our first campaign, The War of the Triplets, there was a number of things I wanted to do differently.

First of, I didn’t want a singular epic campaign that was planned out from the beginning.

Second, I wanted a campaign more like a TV series that evolves from episode to episode. This not only gave me much more freedom to change direction depending on needs, it also let some of my players to take the DM chair and run some of the games.

Third, I wanted it to be grounded in a single location, which became the town of Daisygate. I have grown very fond of Daisygate and expect I will update it and use it in the future.

And Fourth, I wanted the main villain to appear right from the start. The big baddie in the previous campaign actually only appeared in the very last chapter and neither my players nor I really felt anything for it. So to do it differently, Baronesse Leonilda Von Crupp, who would later become the Empress Eternal, appears in the very first chapter and later as the first major defeat for the party.

I have really enjoyed this campaign.

There has not really been any moments where, I as a DM, have been bored which, more than anything, is a testament to the players, who have moved from newbies, to experienced players who understand how to apply creative problem-solving in a world with literally no barriers to your imagination.

It has also been an anchor in a world of change. Brexit and Covid-19 has really changed the world over the last few years.

And my wife and I have also moved country. In fact we have moved 7 times over the last year before landing in Copenhagen to start a new life. 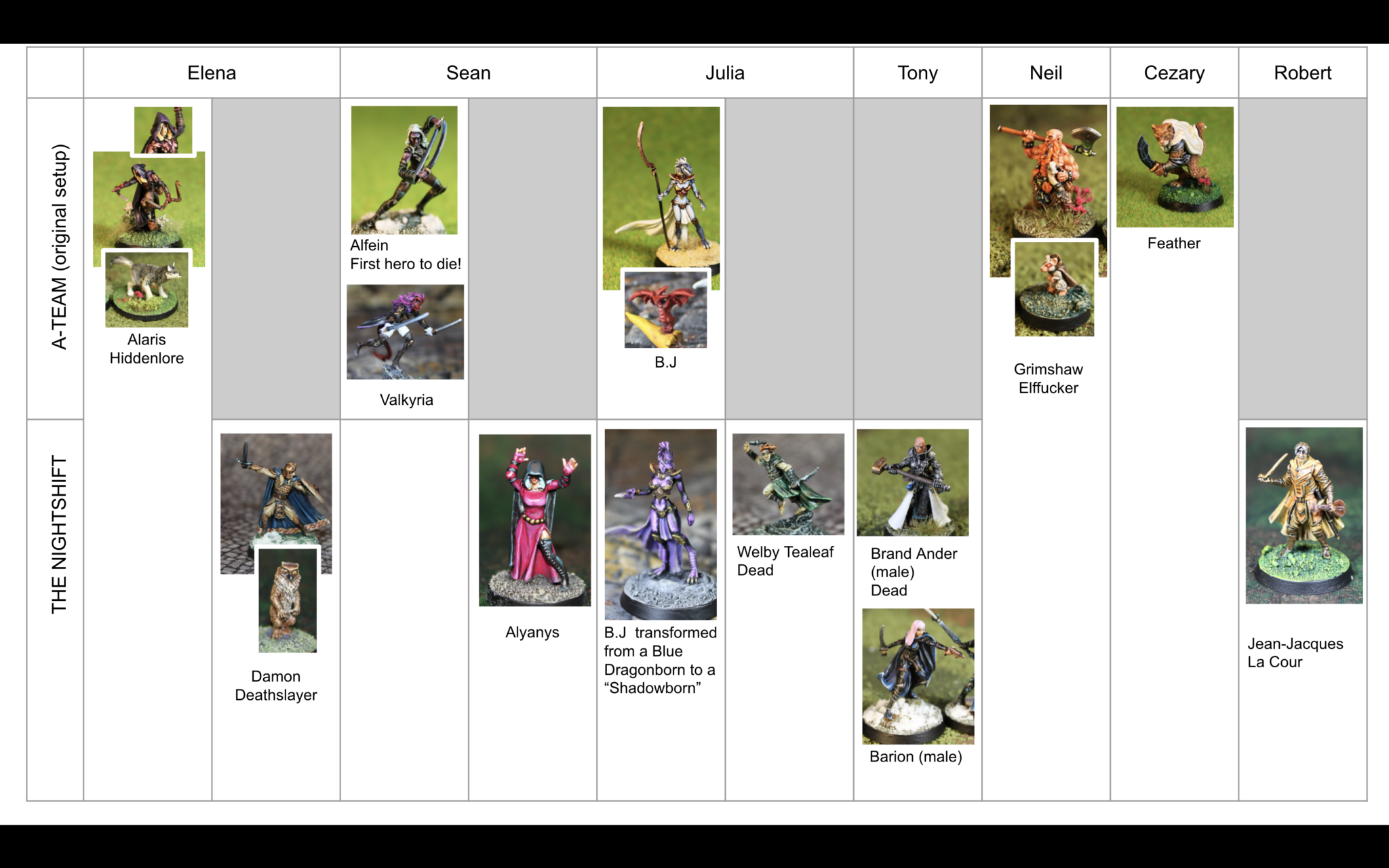 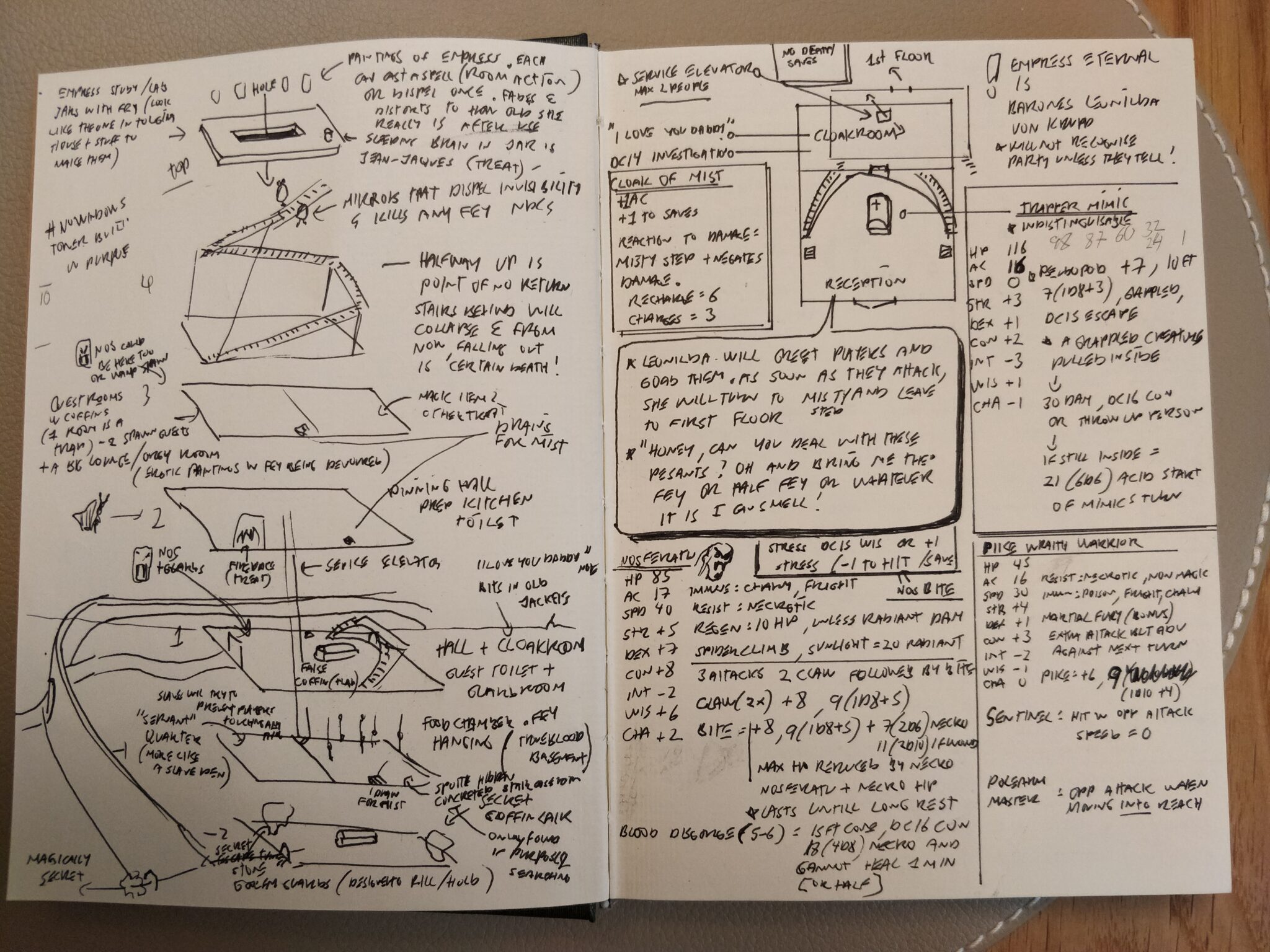 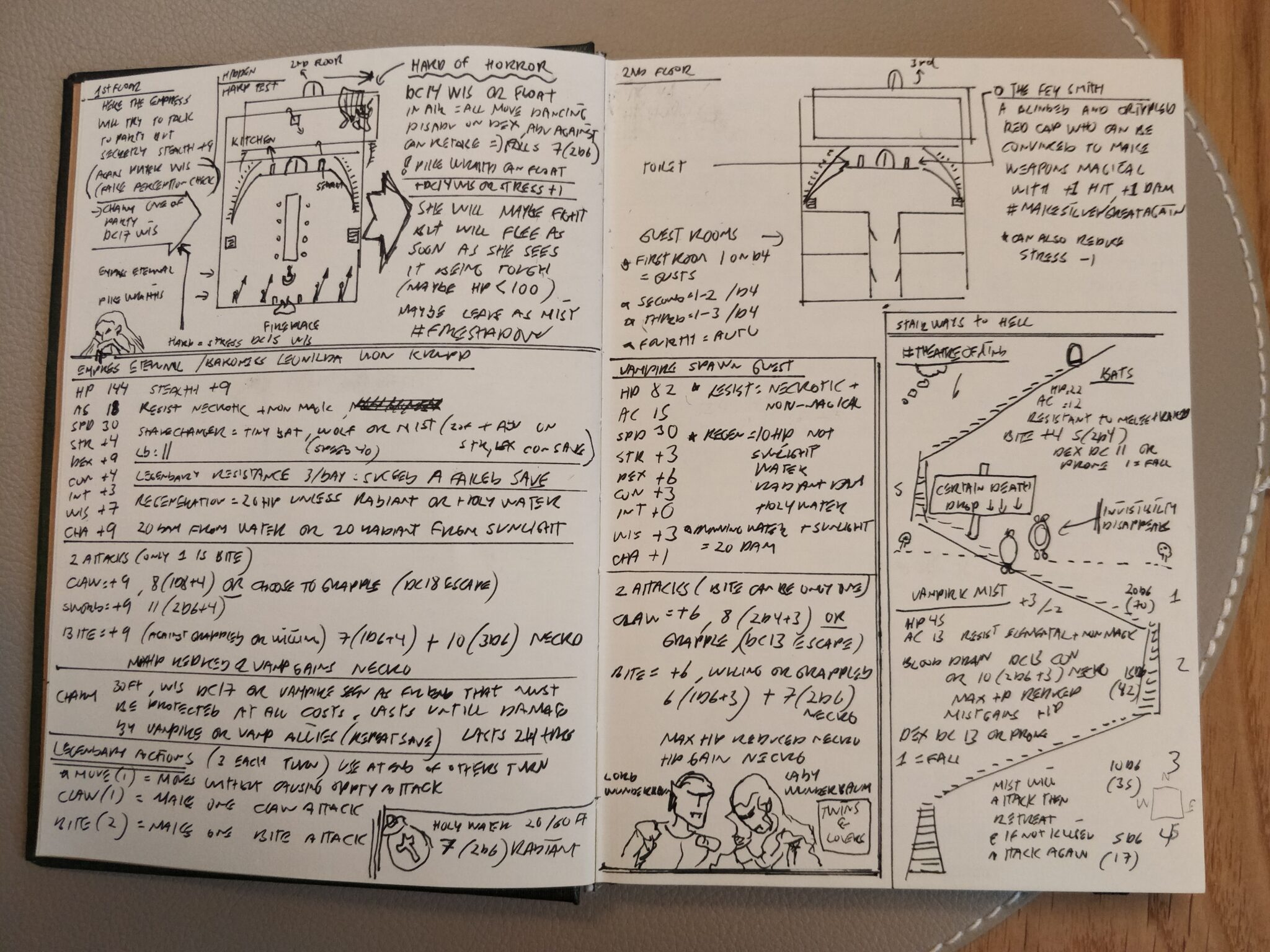 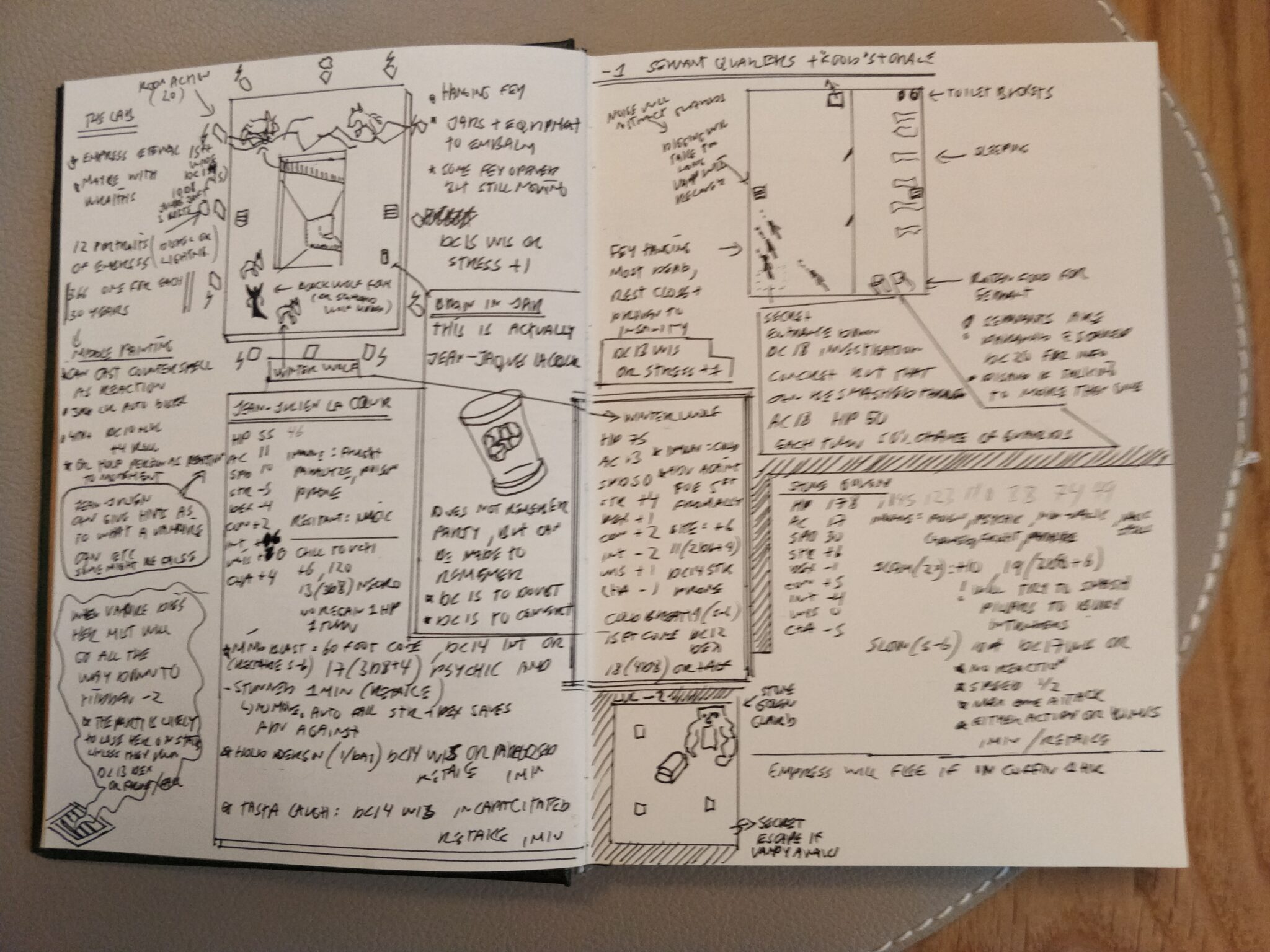