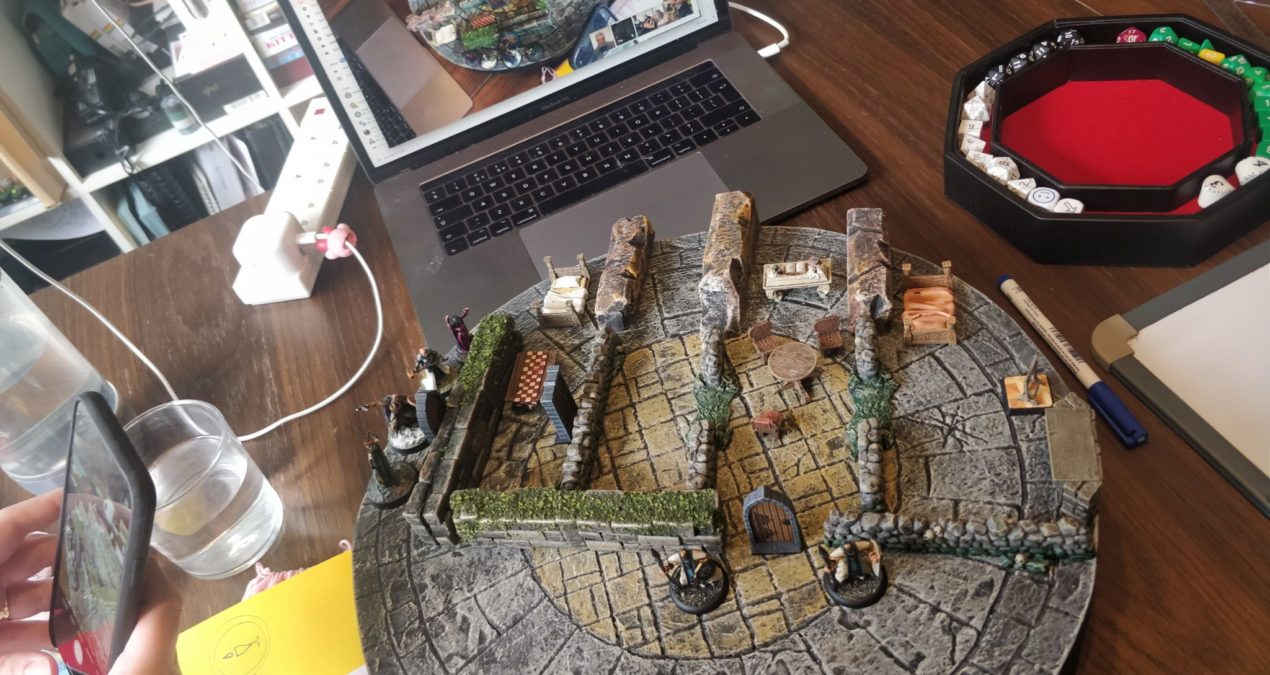 Dungeons & Dragons – Daisygate Chapter 13: The Search for the Baroness

Having learned of the Baroness’ disappearance, Damon rallied the rest of the Nightshift heroes and they quickly ran through a number of ideas of how to get into the castle and in the end settled for a similar approach as what Damon had had success with already:

The two Paladins would claim to be entering the castle to provide extra protection for the Baroness while Alyanys the Warlock made herself and Welby the Halfling invisible and followed closely.

It was an easy ploy made easier by name-dropping Sergeant Konrad who had previously let Damon inside. 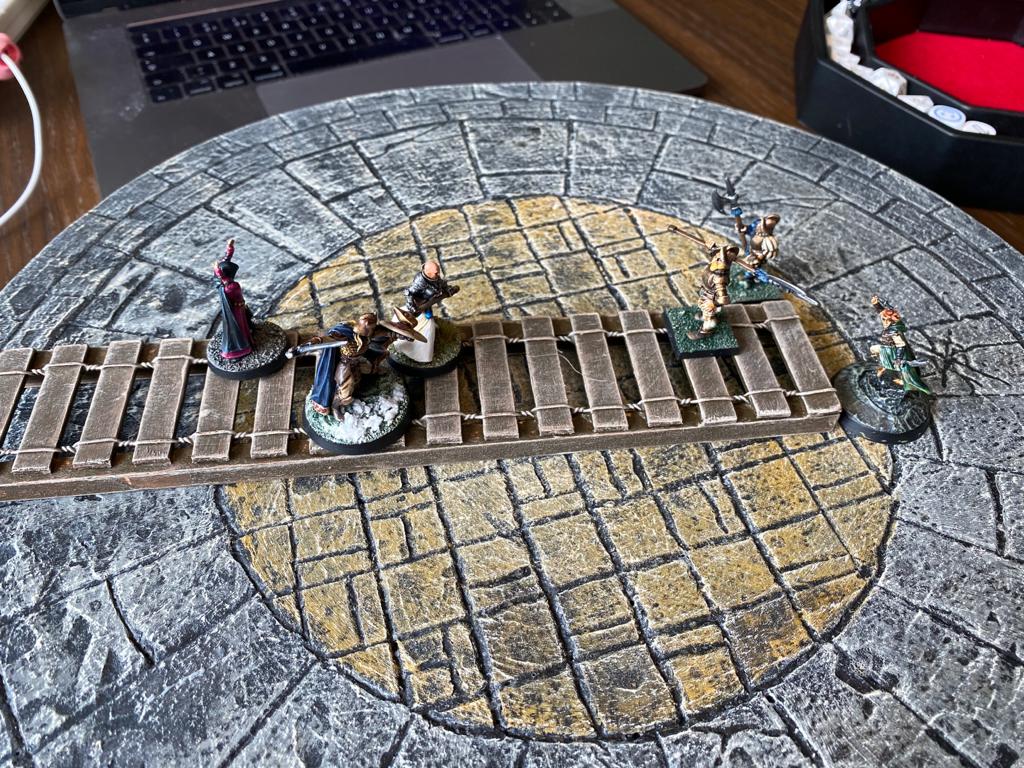 The four made it quickly to Simonette’s chambers, the Lady-in-Waiting thart Damon had been courting and who had pleaded for his help in finding the Baroness.

She was nowhere to be seen.

After briefly investigating her chambers, Welby the Halfling Rogue, cast Disguise Self to mimic the look of the Royal Guardians protecting the Baroness’ door around the corner from Simonette’s room.

Unfortunately, he made the mistake of speaking to them not realising the Royal Guardians never speak and was immediately attacked by one of the royal Guardians while the other ran for help.

The party fought the Royal Guardian, but even between the four of them, they barely managed to kill him and push him inside the Baroness’ chambers before reinforcement came.

They bared the door and their experience quickly led them to a secret passage way down through the fireplace leading them far below the castle.

Hurriedly they descended closing the secret door behind themselves leaving no trace of how they had escaped the chamber. 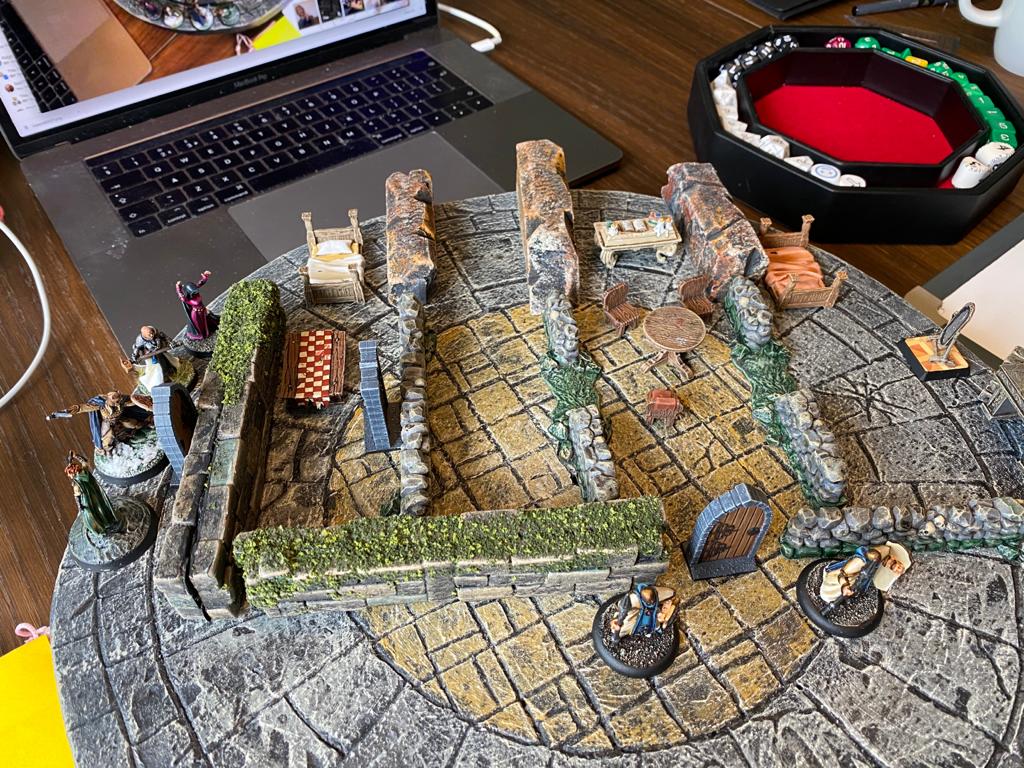 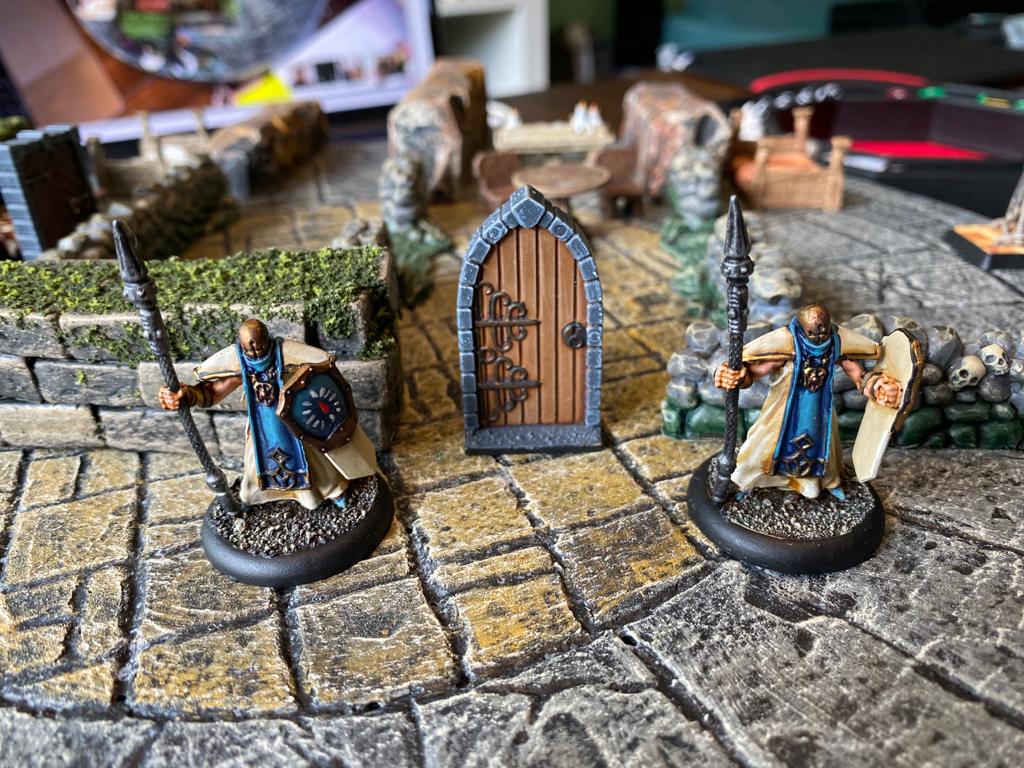 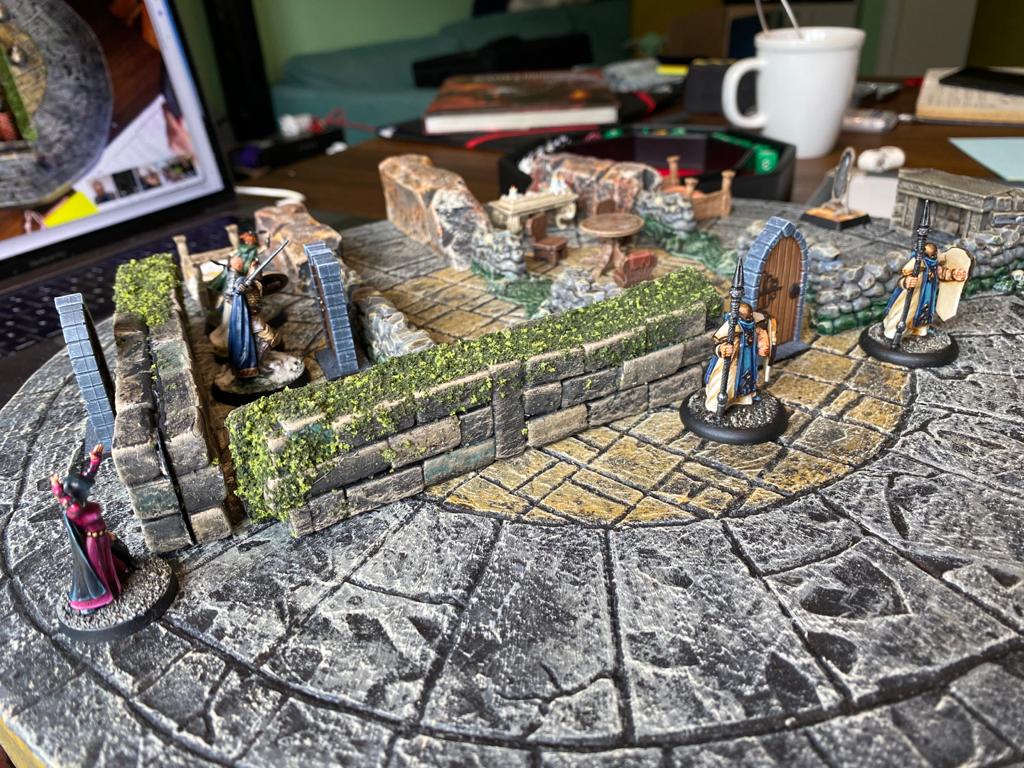 The stairs led them down to a huge underground room carved in the very rocky bedrock under the castle held up by two huge columns.

As the party walked through the columns a Stone Giant Dreamwalker emerged from one of the pillars where she had been sleeping camouflaged by her rocky hide.

A brutal battle commenced. Brand the Paladin was petrified and added th the Giant’s shoulder as a neat little ornament, but in the end the party was victorious and Brand freed. 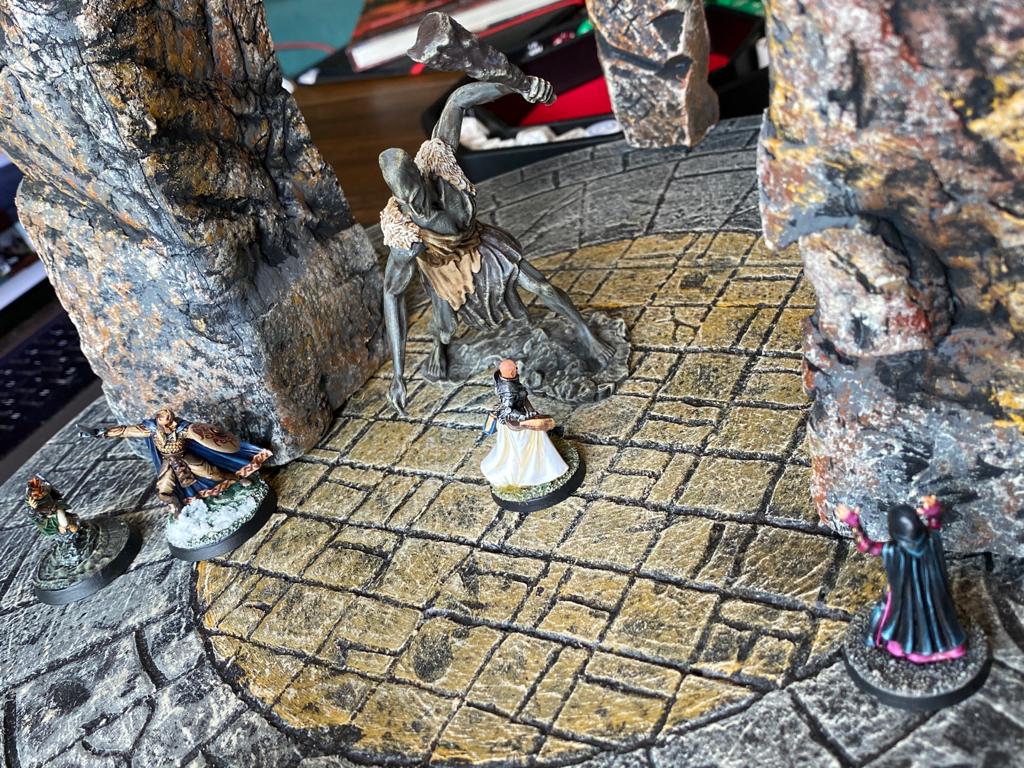 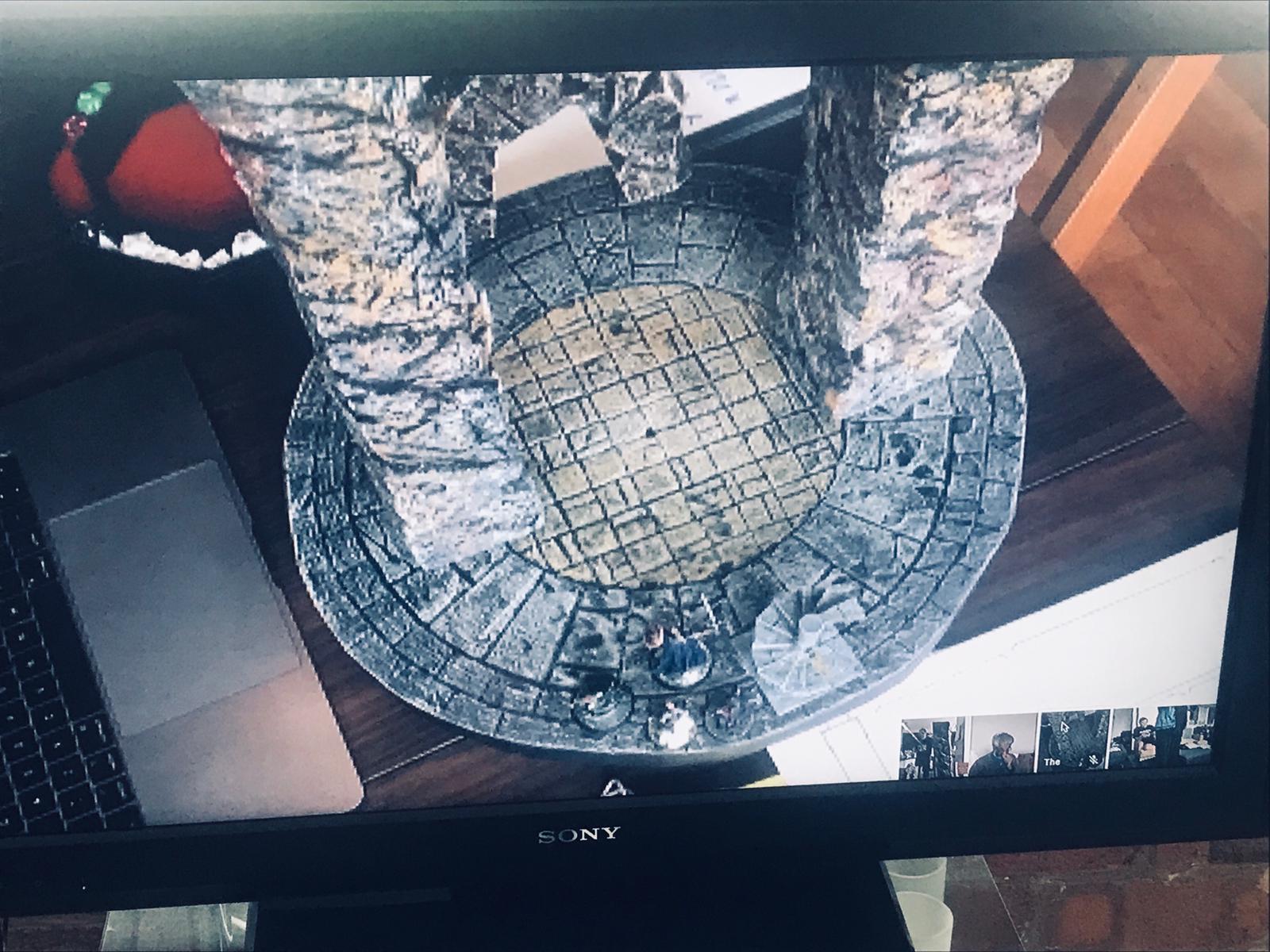 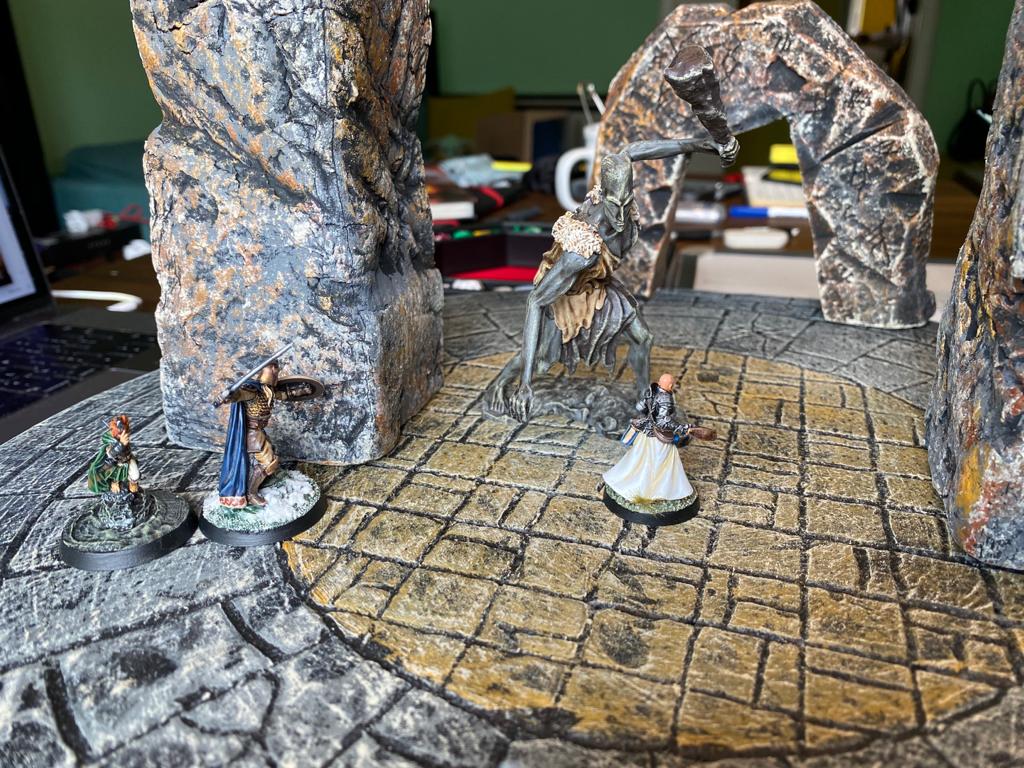 The heroes left the huge room through a short path leading them to the backside of a hidden door.

They opened and walked through and found Baroness Leonilda Von Crupp standing naked in a bathtub washing herself with Fairy blood dripping from hanging fey folk above her who had their throats slit.

The sheer horror of the scene was too much for Welby the Rogue who froze in place unable to move or speak as well as for Brand the Paladin who unable to control himself started hitting Welby with his weapon.

To the Baroness this was all pointless and boring. Giving no fucks arrogant as she is, she told the party to leave pointing at a door in the back near two Royal Guardians.

Damon tried to Command the Baroness, but only succeeded in making her lose her patience. Calling two more Royal Guardians, she left the room confident the Blood Keepers would be able to show the uninvited guests out.

PM Note, given how much trouble a single Royal Guardian had given the party at the start, I had expected the party to comply and leave… .however….

However, the heroes were not so easily deterred and tried to follow the Baroness only to find another two Royal Guardians.

The Rogue, the Warlock and Damon the Paladin all reluctantly moved to the exit, herded by four of the Royal Guardians, while trying to come up with a plan.

Brand stayed unmoved by the secret door they had entered from even with two Royal Guardians approaching him. In the end they lost patience with his stubborn attitude and knocked him down.

Welby, hearing Brand fall, rushed over to get him back on his feet with a healing potion, but it was a short lived success as both Brand and Welby where knocked down and killed!

Meanwhile Alyanys and Damon faced the other four Royal Guardians. They fought bravely, but in the end they where killed too.

Yes, this ended in a TPK also know as “Total Party Kill”. Not seen one of these for a long long time. 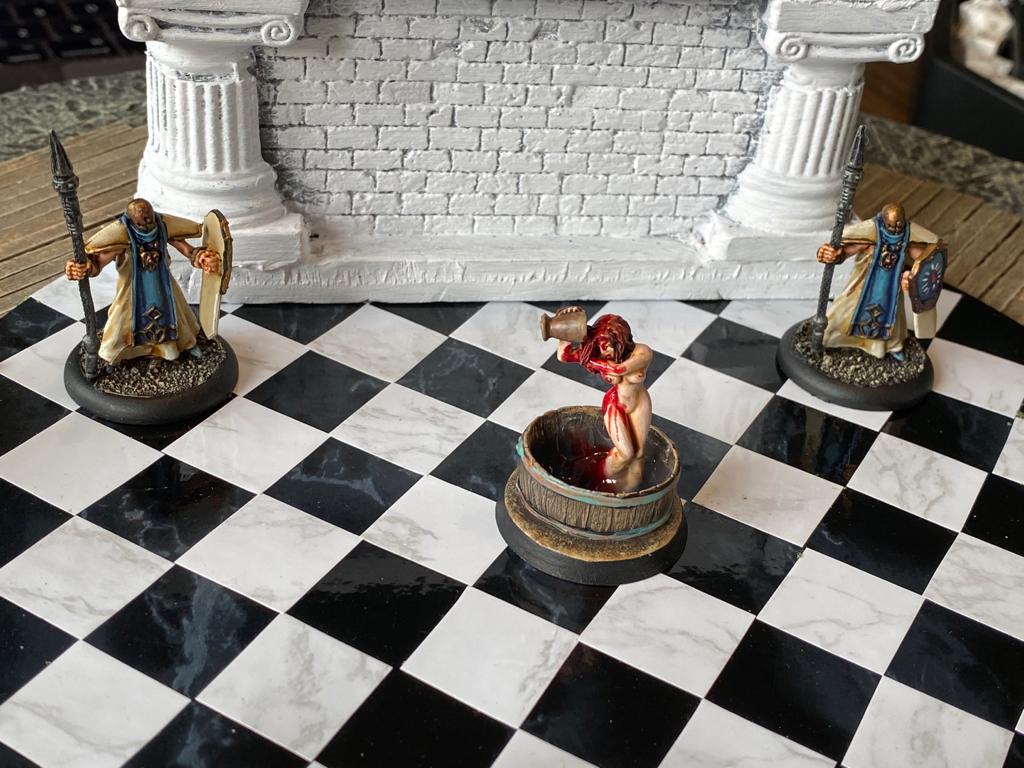 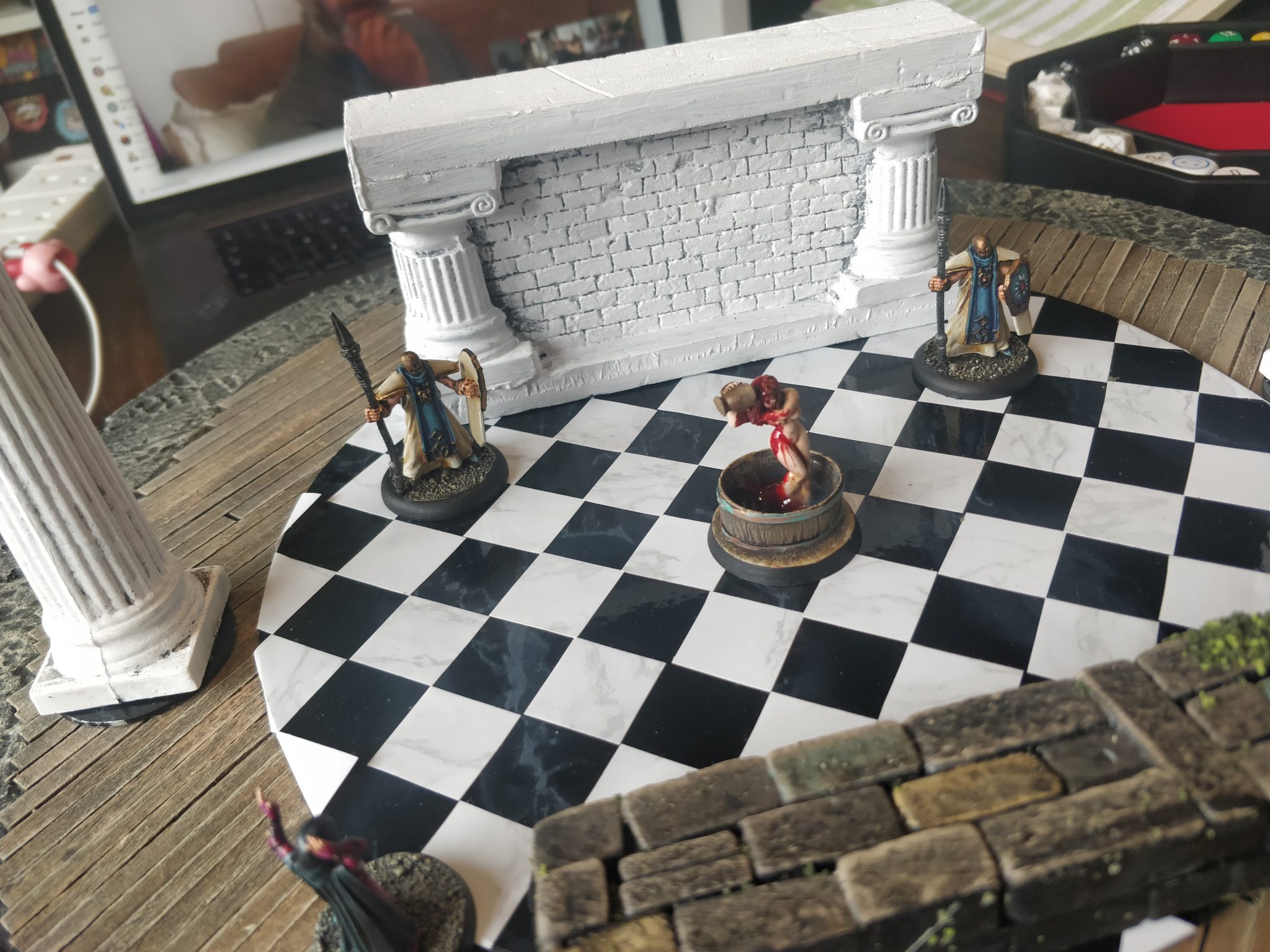 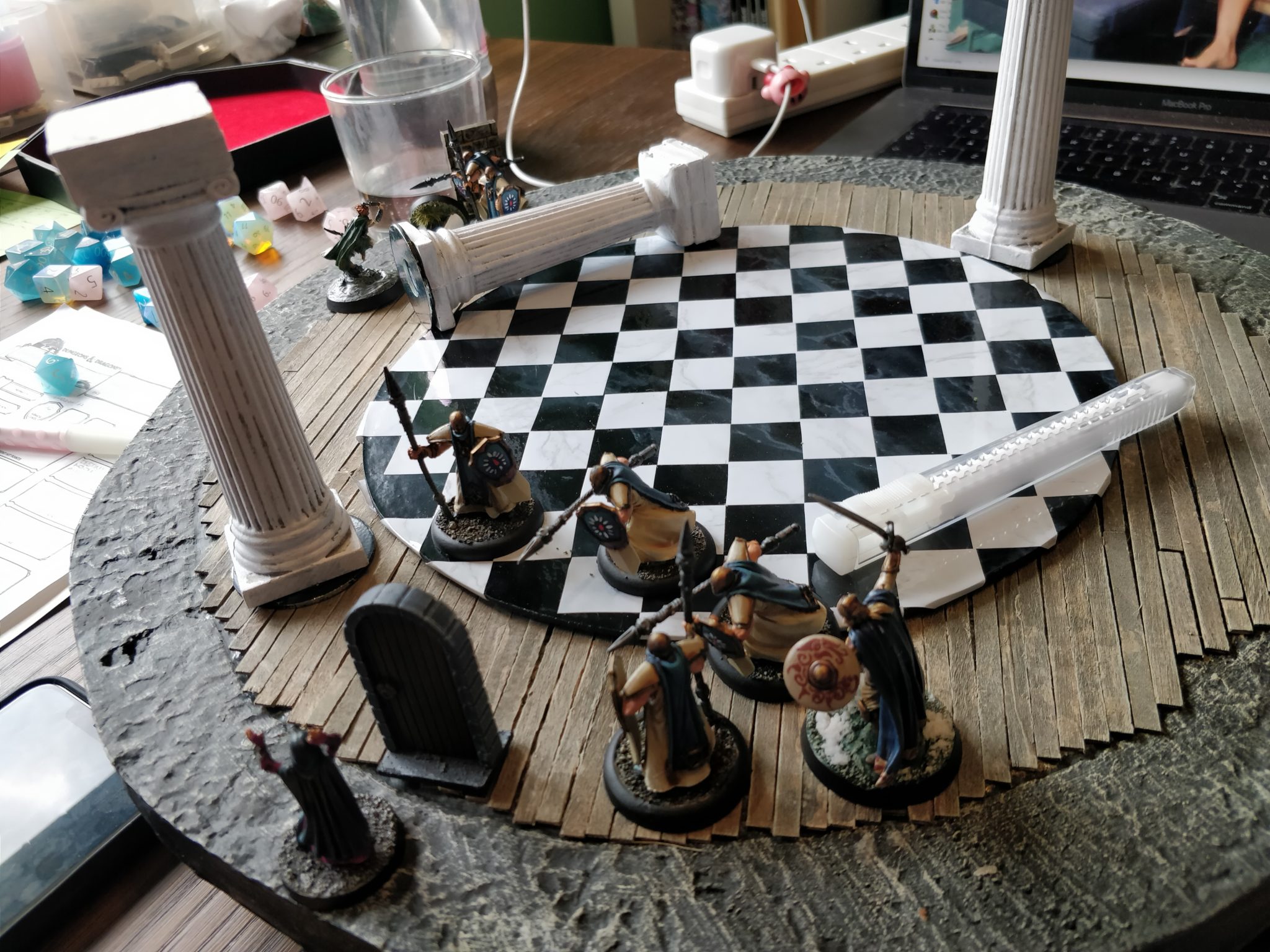 DM note, to be honest this was a pretty epic (and self-inflicted) final battle, but chance would have it that I recently painted a Grim Reaper miniature and I decided to set up a final final showdown…

The four heroes, now dead, woke up in a barren wasteland. It was ice, but not ice, it was grey, it was featureless, it was Death’s waiting room.

The Grim Reaper himself moving in an unnatural slow fashion, but at the same time with incredible speed, soon stood before the players and the final fight for their lives began.

First Brand the Paladin fell to the Reaper’s Scythe.

Then Welby the Rogue fell never to rise.

But in the end, this was enough distraction for Alyanys and Damon to damage the Grim Reaper with Damon Duskslayer (henceforth named “Damon Deathslayer”) landing the final, brutal blow that received a respectful nod from Death himself, who chose to withdraw leaving Damon and Alyanys with their lives.

They both woke up in the Unnamed Tavern. On the beds of Welby and Brand was all their equipment and loot, but the two heroes themselves had perished forever. 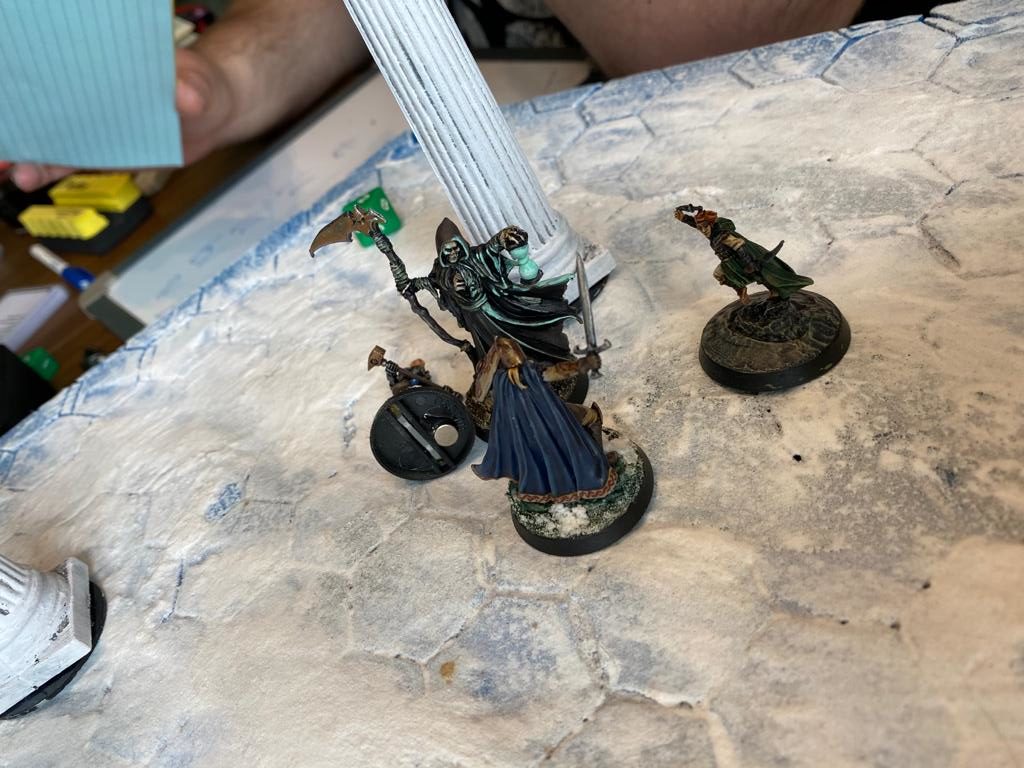 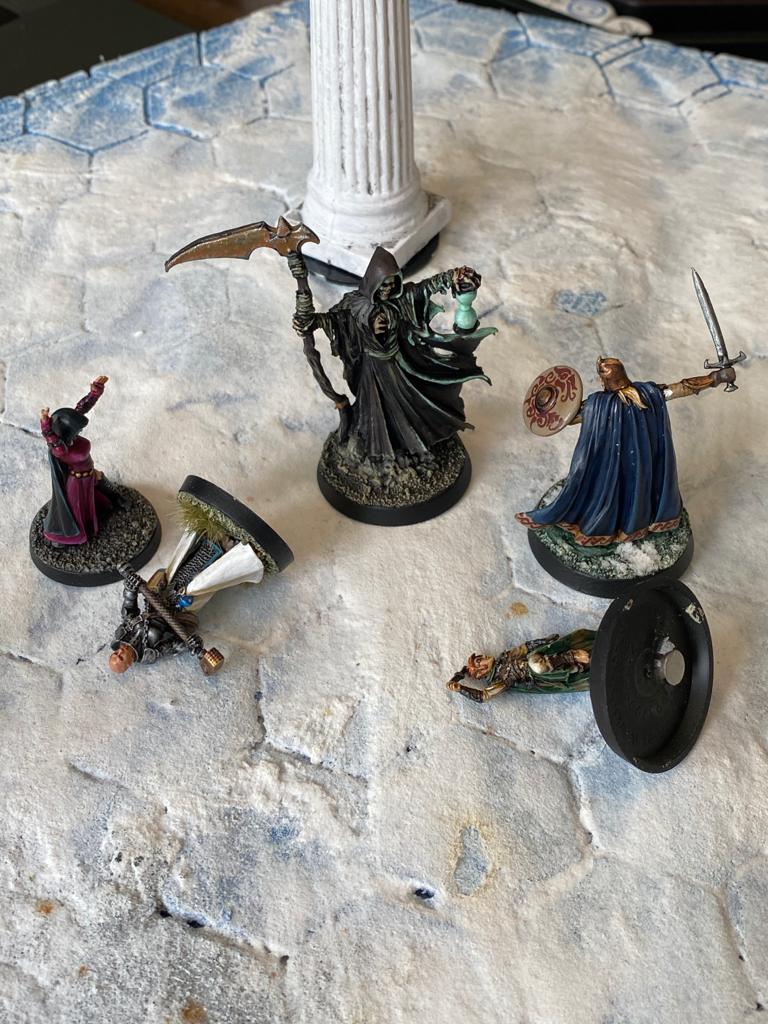 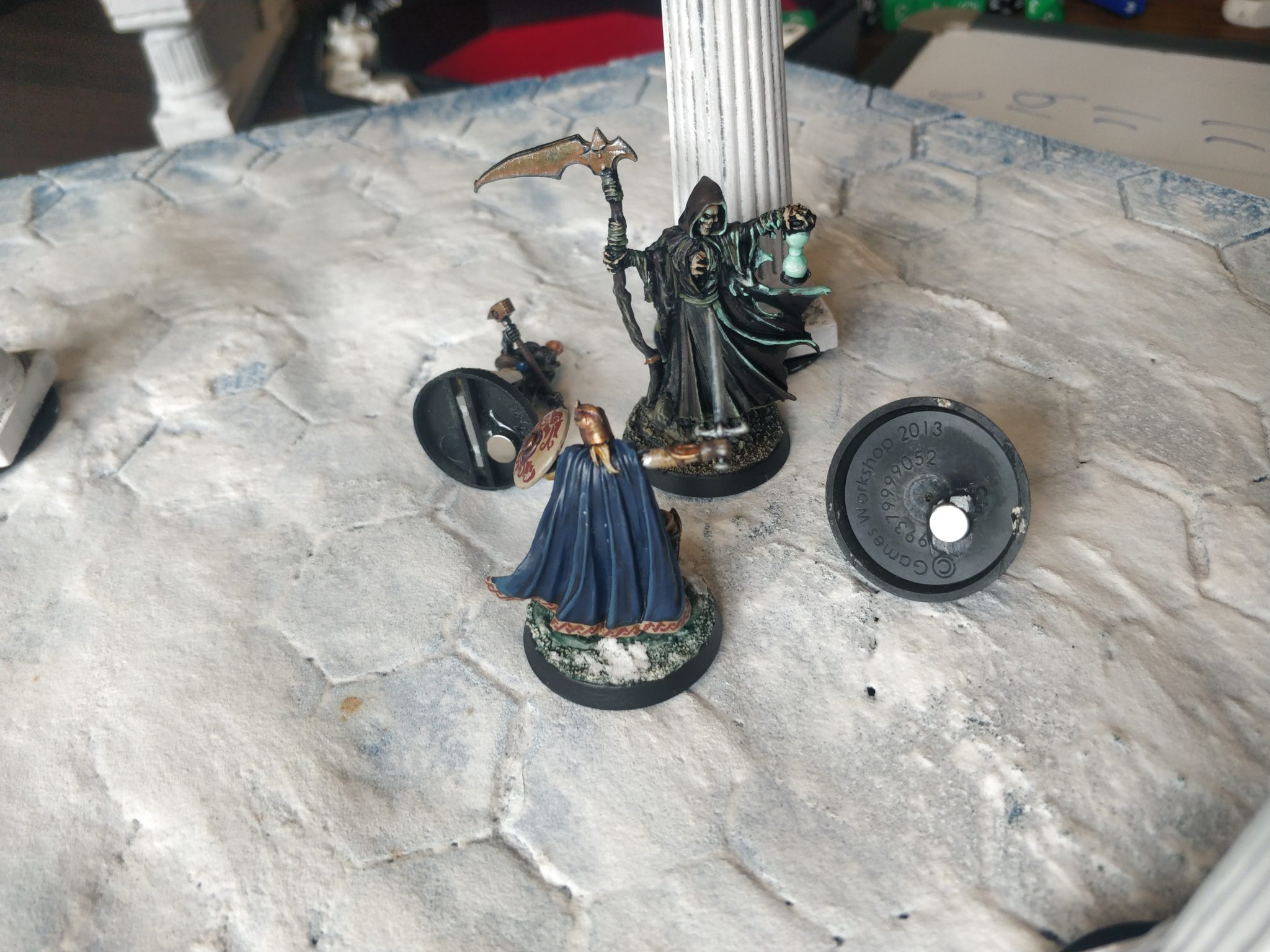 Dungeons and Dragons, Orcs and Goblins