February last year, I introduced D&D to a bunch of people who almost all had no prior experience with the game or very little from when they were in school.

Now, a year and a half later, we are still playing the same campaign, but in the last chapter of our campaign, we had the very first character death!

I’ll come to that at the end of the article, but the game also had some other lessons learned that I want to cover.

Long story short, the party is heading into the Everdry Desert to retrieve something from Fortress Fata Morgana. And to enter the desert they have to go through the Golem Gate.

For this game I did do some more structured planning for three reasons:

One night ahead of the game, I set up all encounters and modified them beyond my original notes for them using PostIts… this turned out to be a really helpful tool. See further down for the set up vs the actual game.

But in hindsight, I should have played out the encounter with actual combat as I would have spotted some problems we encountered. See below.

Waiting at the gate to the desert was the undead reincarnation of an elven NPC they had encountered before, who now does the bidding of The Unseeing Eye, a mysterious foe who wants to kill all living beings.

The first encounter was the party against a Sword Wraith Commander with his ability to raise additional Sword Wraiths.

From the top down:

All in all this encounter went like expected, but there were three things I would have liked to improve: 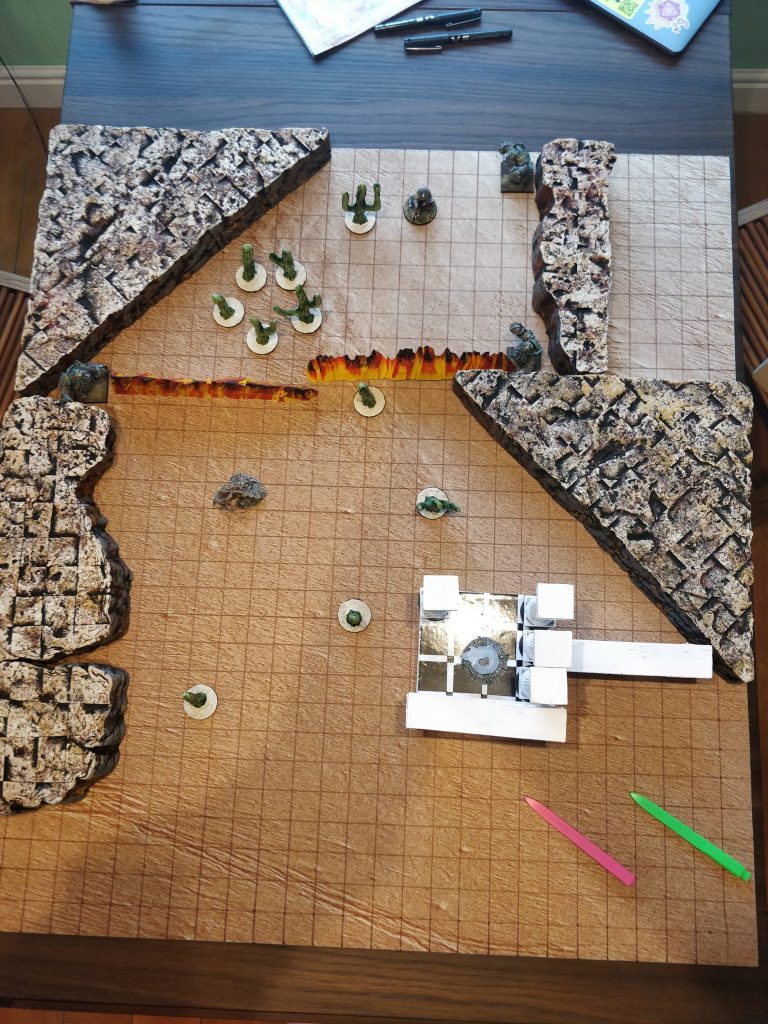 Splitting the party with the Flame Wall worked a charm. The Barbarian and Rogue faced the Sword Wraith Commander, while the Ranger and the Sorcerer were stuck trying to figure out how to help. Also, the Ranger early on figured out that the Water Weird would be of use. 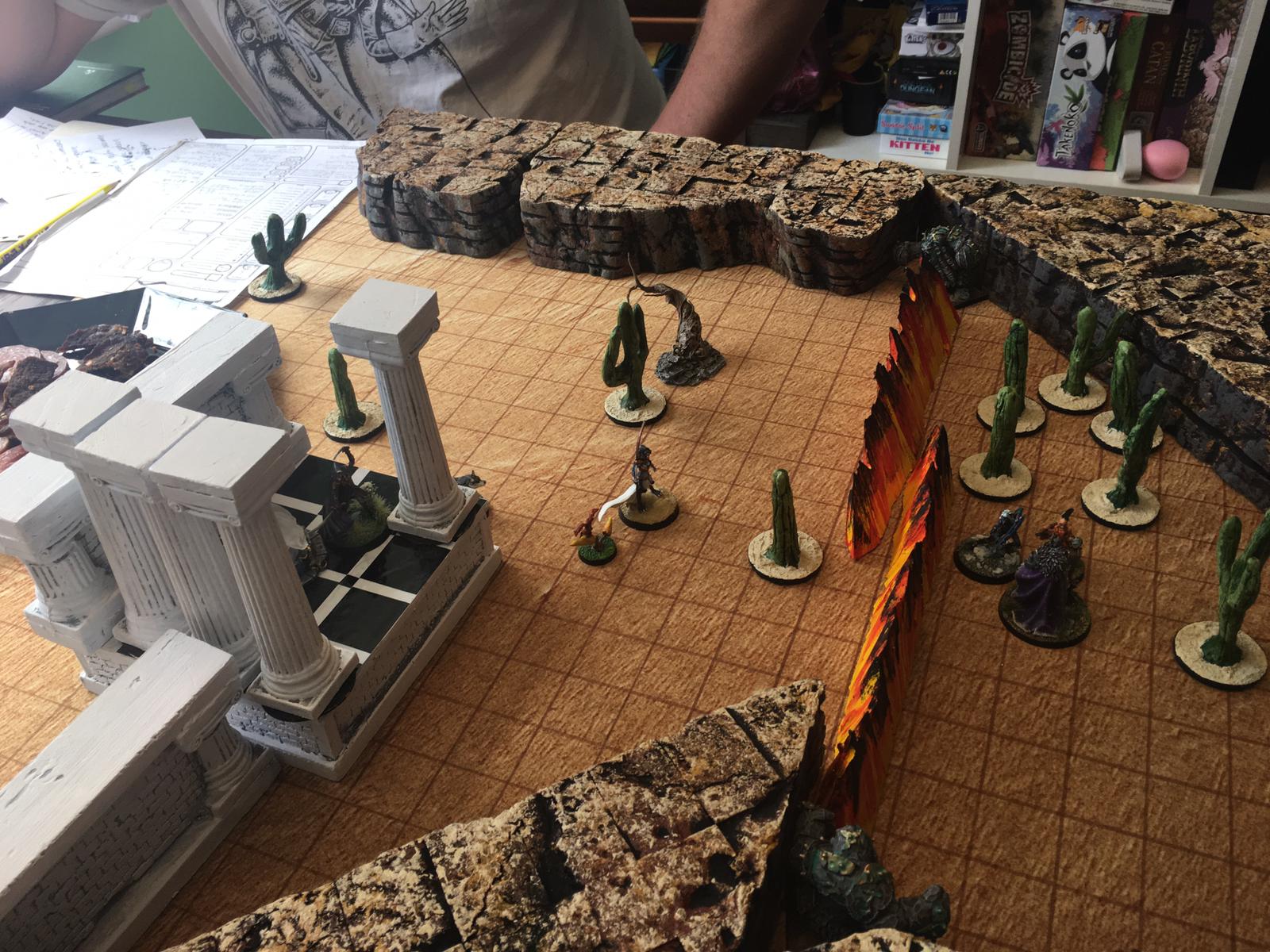 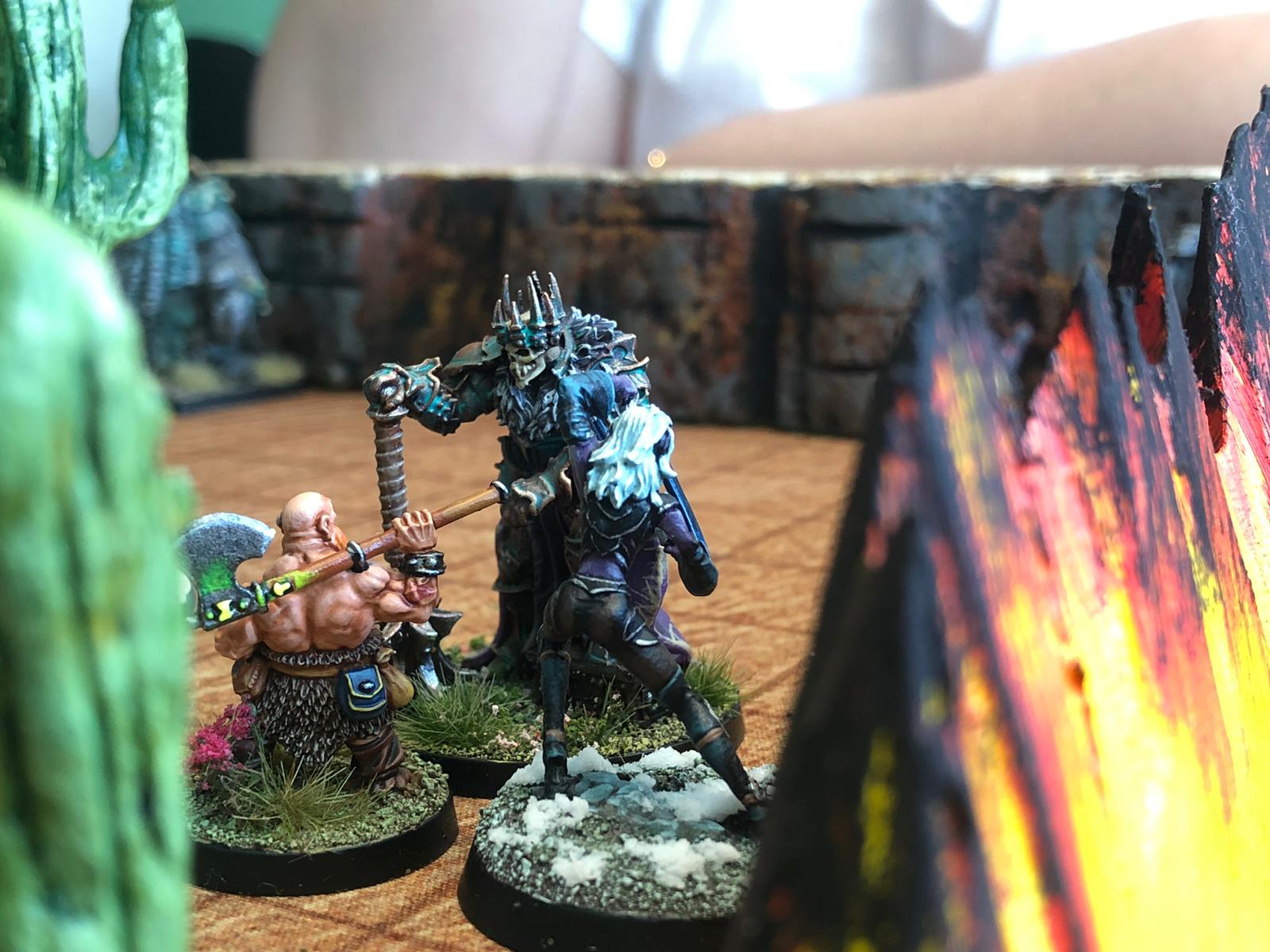 As the party entered the Everdry Desert, I expected them to bypass the first Oasis on the map as they had figured out a clever way to carry all the water they would need in the desert. However, this was not so and the next encounter the party found themselves in was the oasis that was the home of the Young Blue Dragon Electrax Stormwing.

So this encounter went FUBAR in a really epic way!

The gist of the encounter is simple, but it is lethal: 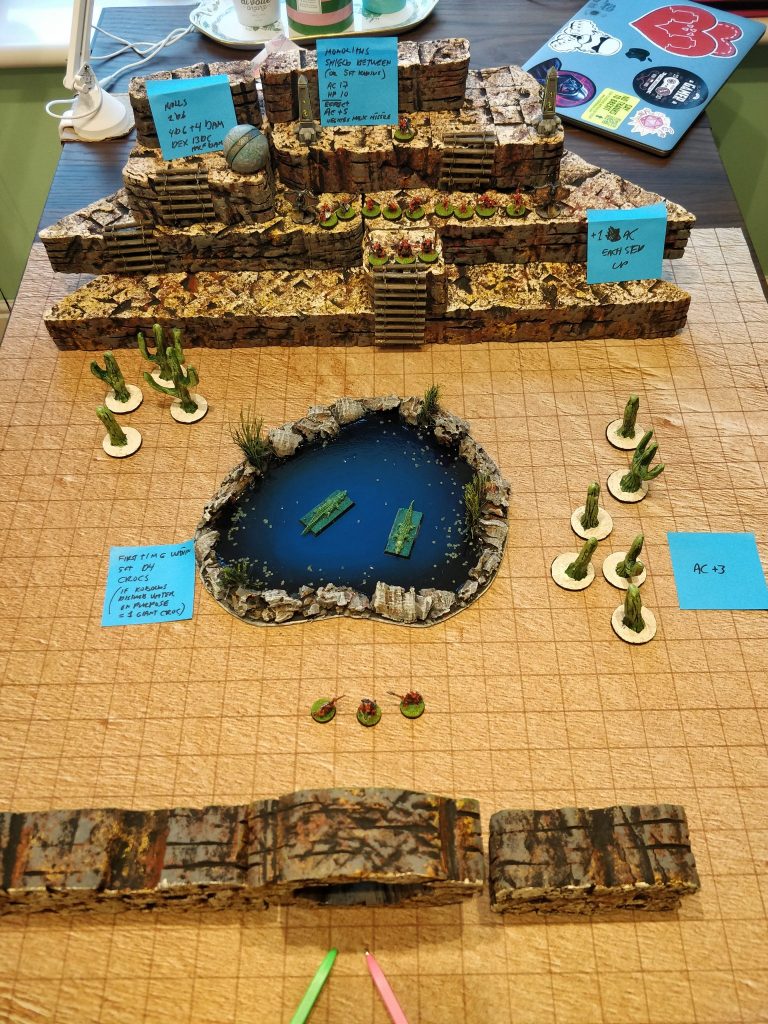 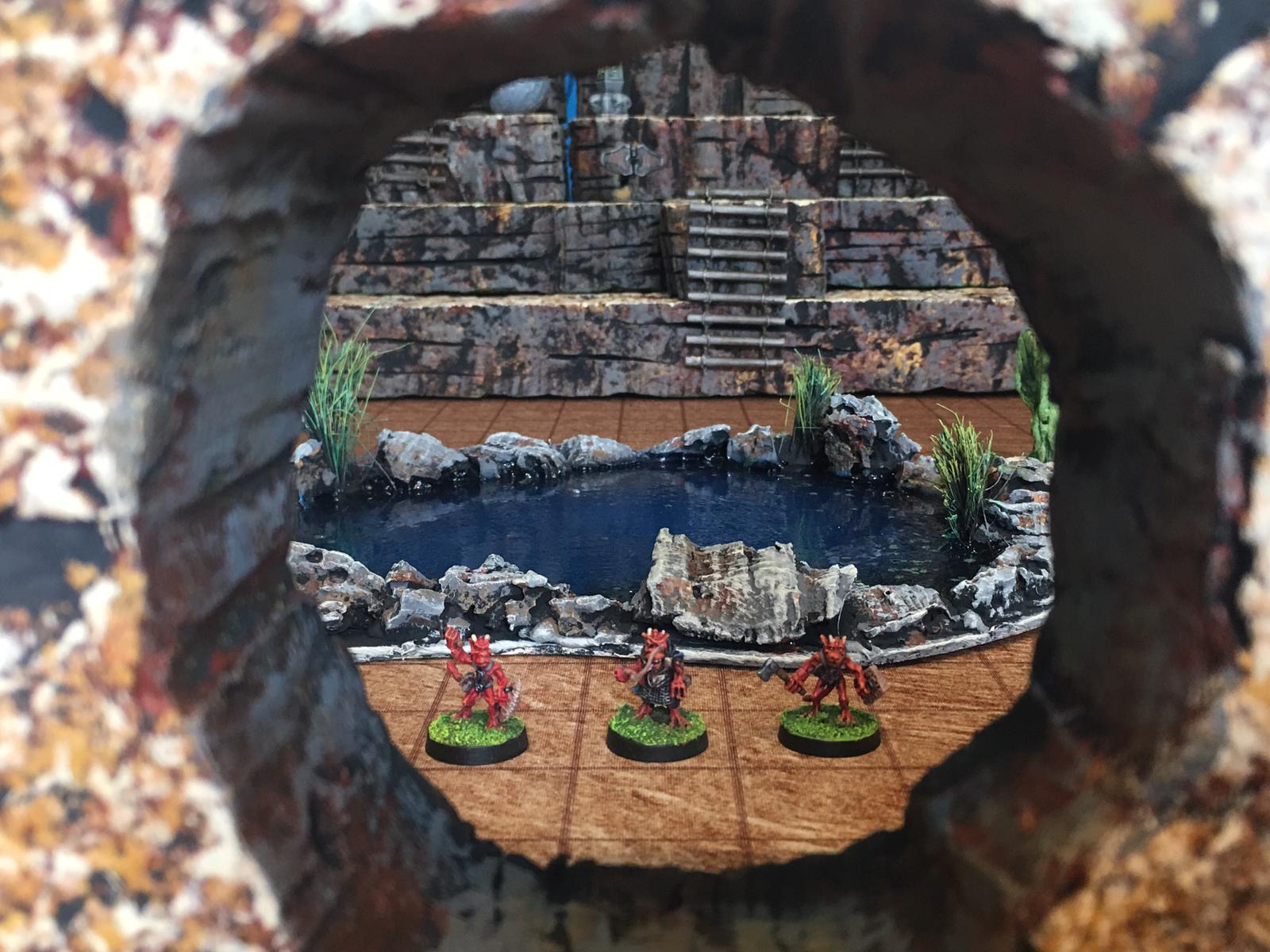 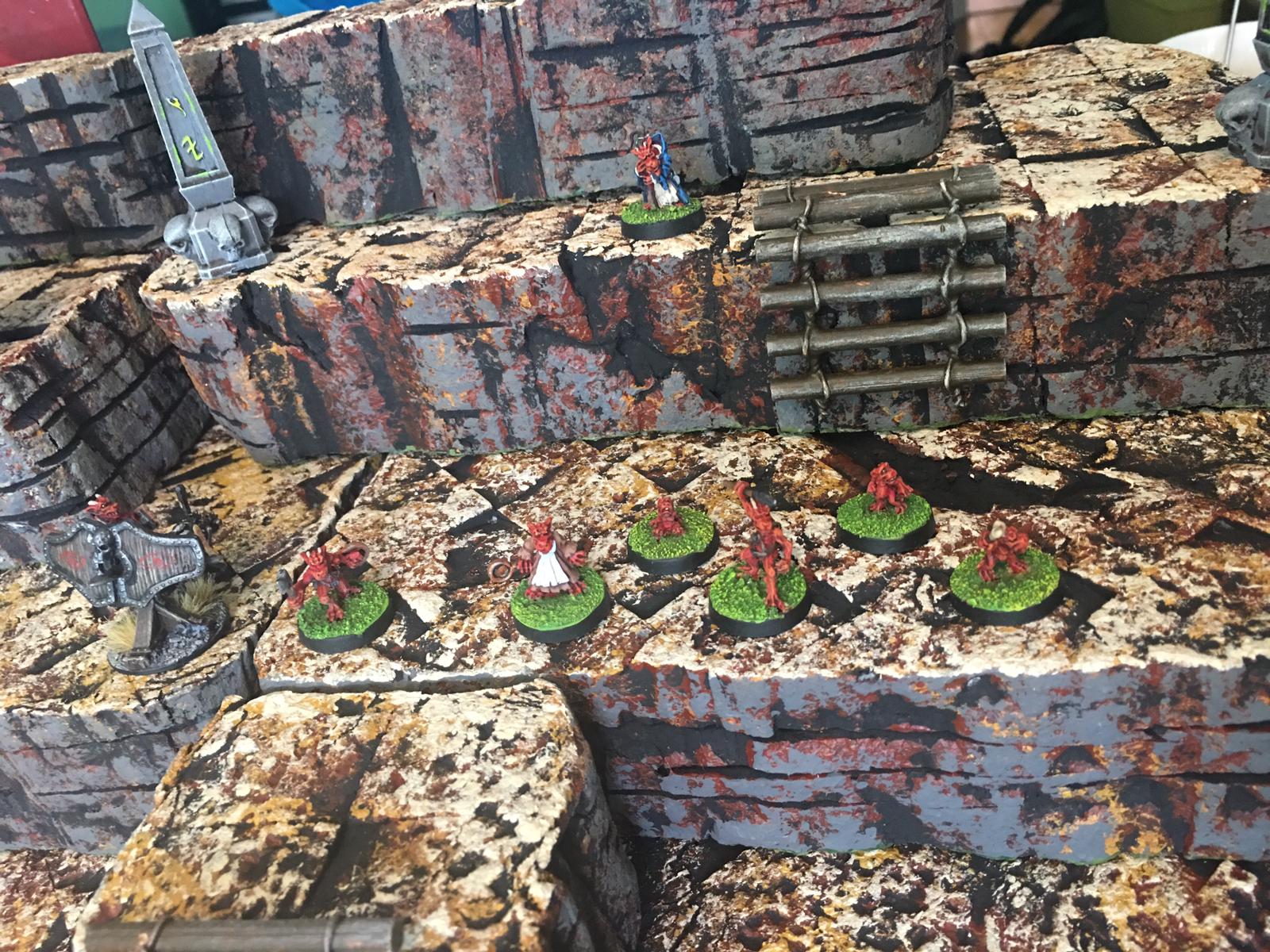 But, this highly defended cliff wall is NOT the encounter, it is the bait!

The real encounter happens once the Kobolds feel they are losing at which point they will signal for help up in the sky. After which the party will start to feel a tremble underground and D4 rounds later the Young Blue Dragon emerged through the ground right in the middle of the party.

Elextrax Stormwing demanded and explanation to all its dead Kobold subjects spread all over the area. And further demanded the party would surrender and kneel before her….

…but the party did not all kneel and Elactrax attacked. Her lightning breath was devastating and the Rogue went down immediately.

Our Barbarian leapt up the cliff wall and took over a bolt thrower (amazing idea by our Sorcerer player and I am so pleased the players are starting to use the stuff on the battlefield), but in the end got knocked out by the Dragon followed by the Ranger leaving only the Blue Dragonborn Sorcerer standing. What an roleplaying opportunity!

The Sorcerer dropped to her knee and the dragon recognising the blue linage in her, stopped short of killing her too, but not before our Rogue had rolled 4 failed death saves in a row (one Inspiration reroll) and died for good!

This was a mighty epic battle I did not see coming! And I must admit I am looking forward to the next game more than any game we have had to date for a number of reasons:

So yes, our campaigns first real death is not in vain! 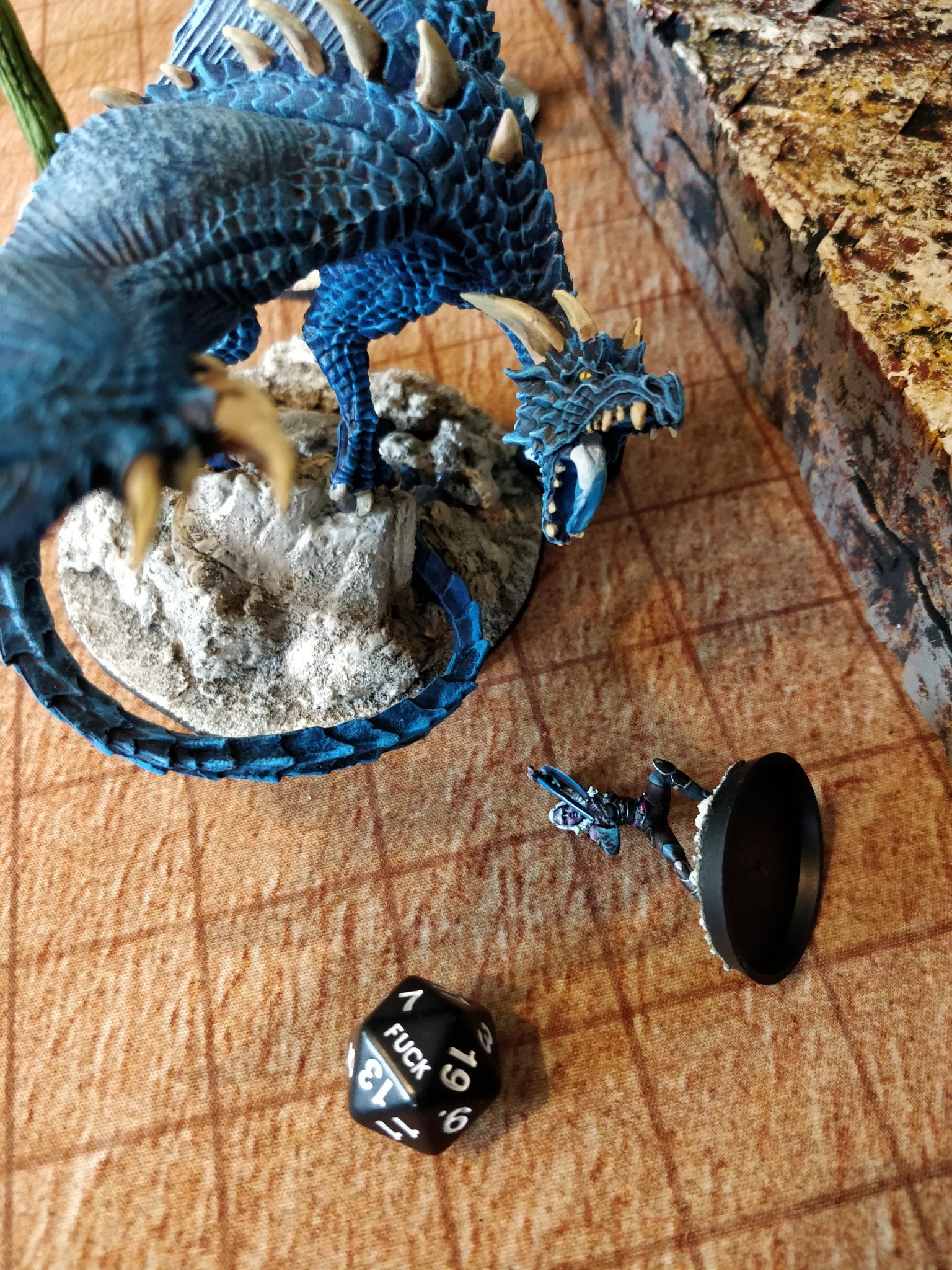 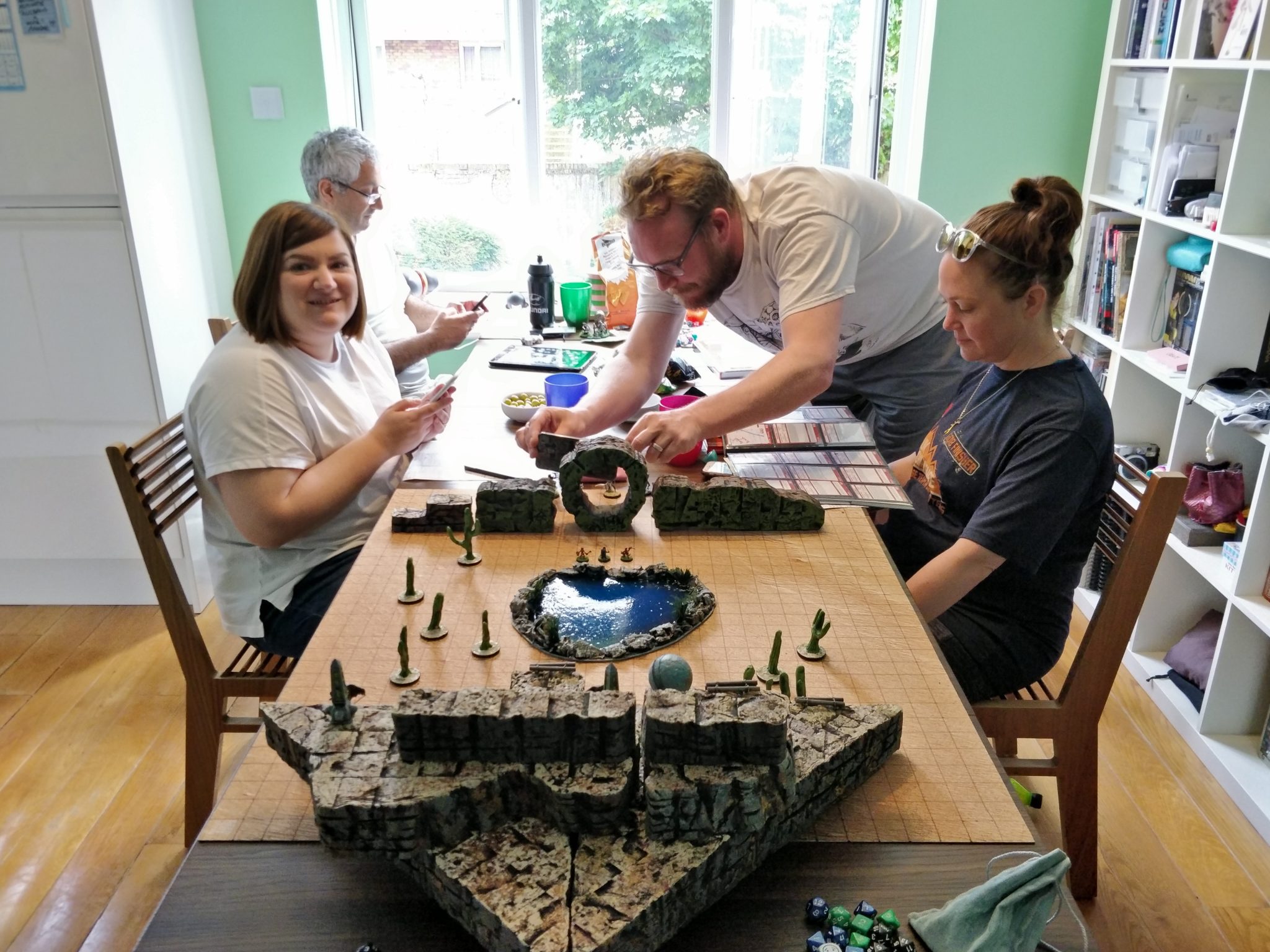 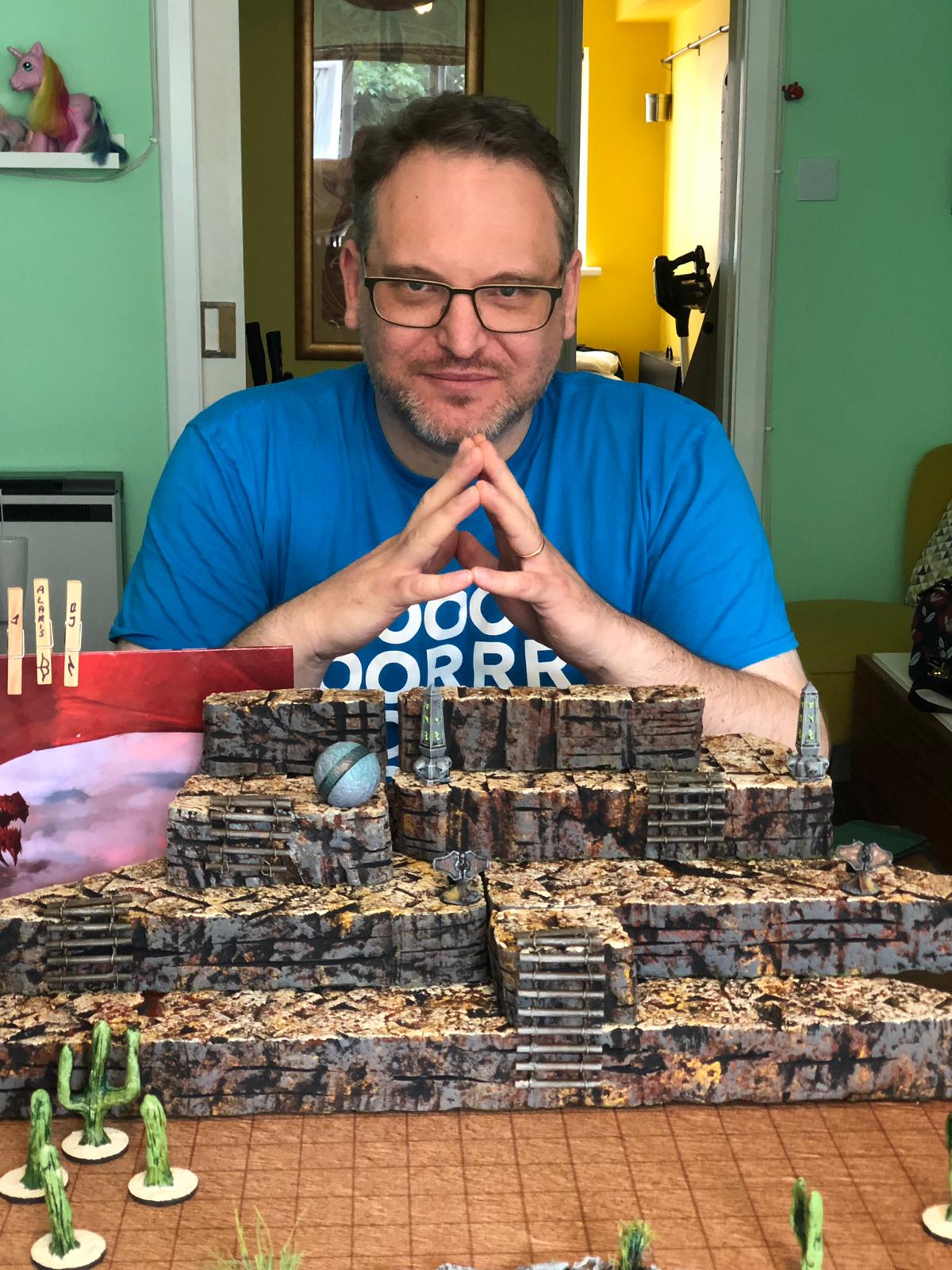 Goodbye Lady Alfein. We will miss your sneaky ways.