Photo credits to all my players. Ellie, Julia, Neil and Sean.

Back in February this year (2018) I started playing Dungeons & Dragons again for the first time in 20 years with bunch of people, where all but 1 hadn’t played RPGs before… or dabbled a little bit in school back in the 80s.
The first game was the start of our campaign and in short ended with the party rescuing a unicorn from being sacrificed, but the necromancer Varona Stillborn left the scene unharmed. The elven ranger of the party noticed some similarities with Varona’s sacrificial rites to some he had seen performed by his father’s right-hand man on wolves back home in the Elven Omnitropolis.

And so the party decided to venture to the Lyrayara, the Elven Omnitropolis to investigate.

7 months later, and 7 games later, the party arrives at Lyrayara for the conclusion of the story arc…

As the party crosses the square in front of the castle, they intervene as they see some children maliciously teasing a beggar and they calm an increasingly tense argument between a drunk patron and a candied apple seller.

I’ve been intrigued by mechanised social encounters since I saw Runehammer’s youtube video Social Encounters: Decoded. And for this game I wanted to give the party some interaction points with random city dwellers that could become either a benefit or an obstacle later on in the game.

To track this I made social encounter cards that has basic details about the NPC, their motives and fears and how they would act further down the storyline depending on the first encounter. Below you can see two of the cards. 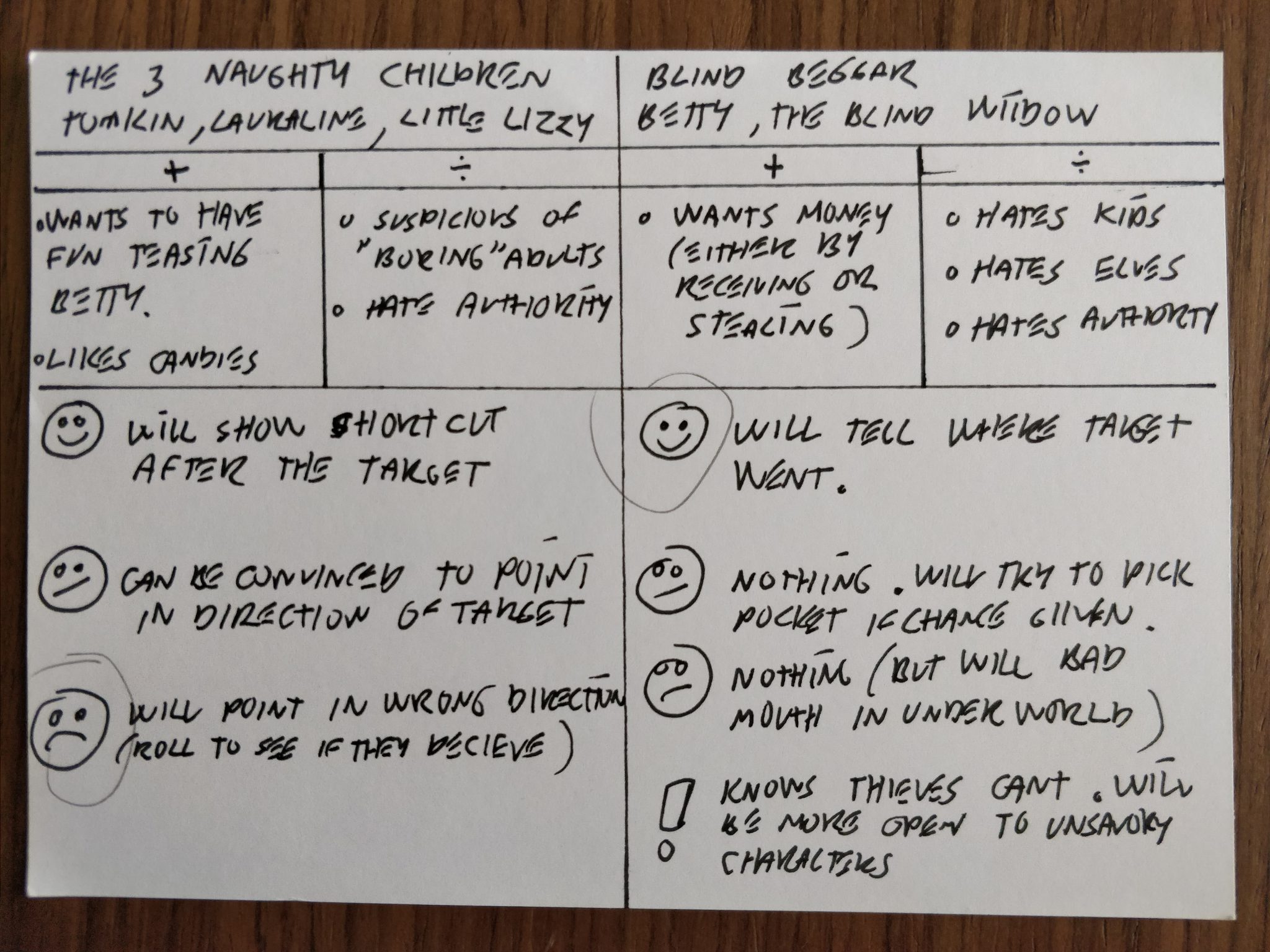 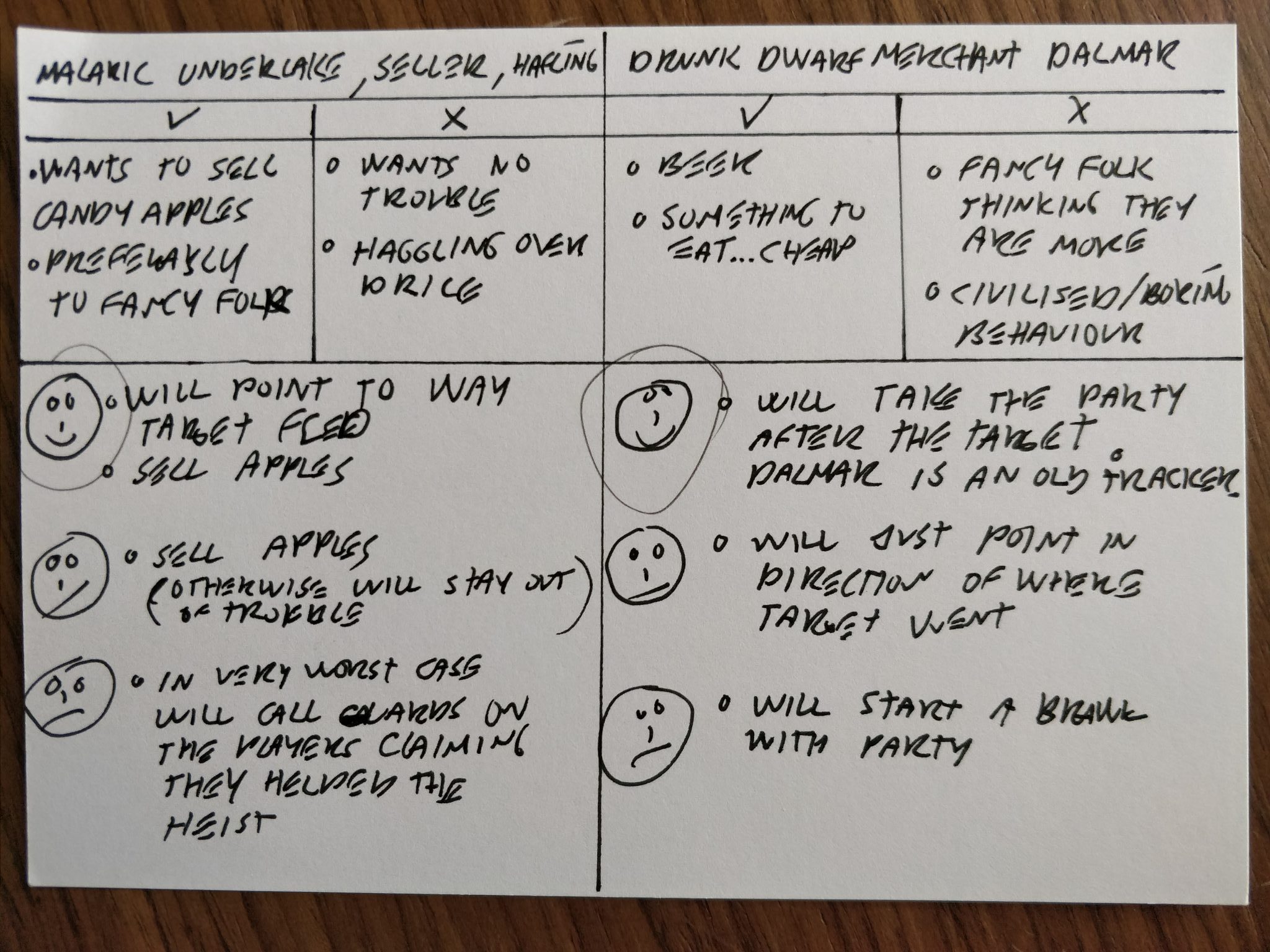 Entering the castle, the party sees the wonderful Eternal Flame guarded by four elves for the house of Alaris, the Elven Ranger of the party. As well as multiple king’s guards.

Two wood elves are currently in front of the royals. And while the party waits, a group of three drow ambassadors enter and cuts in front of the party as they feel it is their right to do so. That little misunderstanding is corrected quickly by the Grimshaw, Dwarven Barbarian.

While the party are making their greetings to the royals, the High Queen has a violent fit and falls unconscious with froth from her mouth.

The High King orders the Eternal Flame to be removed and secured in its nearby temple, he orders the guests held, but with none of the guests having been near the queen, it seems unlikely they are to blame.

Soon it becomes clear the wood elves, now found dead in an ally, were to blame, but as the guests and the King try to make sense of the situation, a messenger comes running telling the High King that the Omnitropolis is under attack by undead dragons and another messenger brings news that the Eternal Flame never reached the temple.

The king charges the party, with the help of the drow, to find the Eternal Flame.

So… A number of things happened here:

There are a few things my players do not know yet, so I won’t spoil it but at the end of the page, I will list the loose ends coming out of this session.

The party accepted the High King’s ask (also as it came with a promise of a significant reward). Chasing after the Eternal Flame, they lost the trail but saw the three children from before and asked them for direction. First the children gave them one direction with absolute certainty, but upon receiving threats from the Dwarf, they reluctantly changed their minds and gave a different direction.

This was the consequence of the social encounter. The party had left the children before with a negative attitude. See the social card above.

As the party kept running, a portal appeared. Out stepped a senior drow official ordering the 3 drows to follow him, which they did. As they left the official explained to the party the Ever Frost had been stolen. 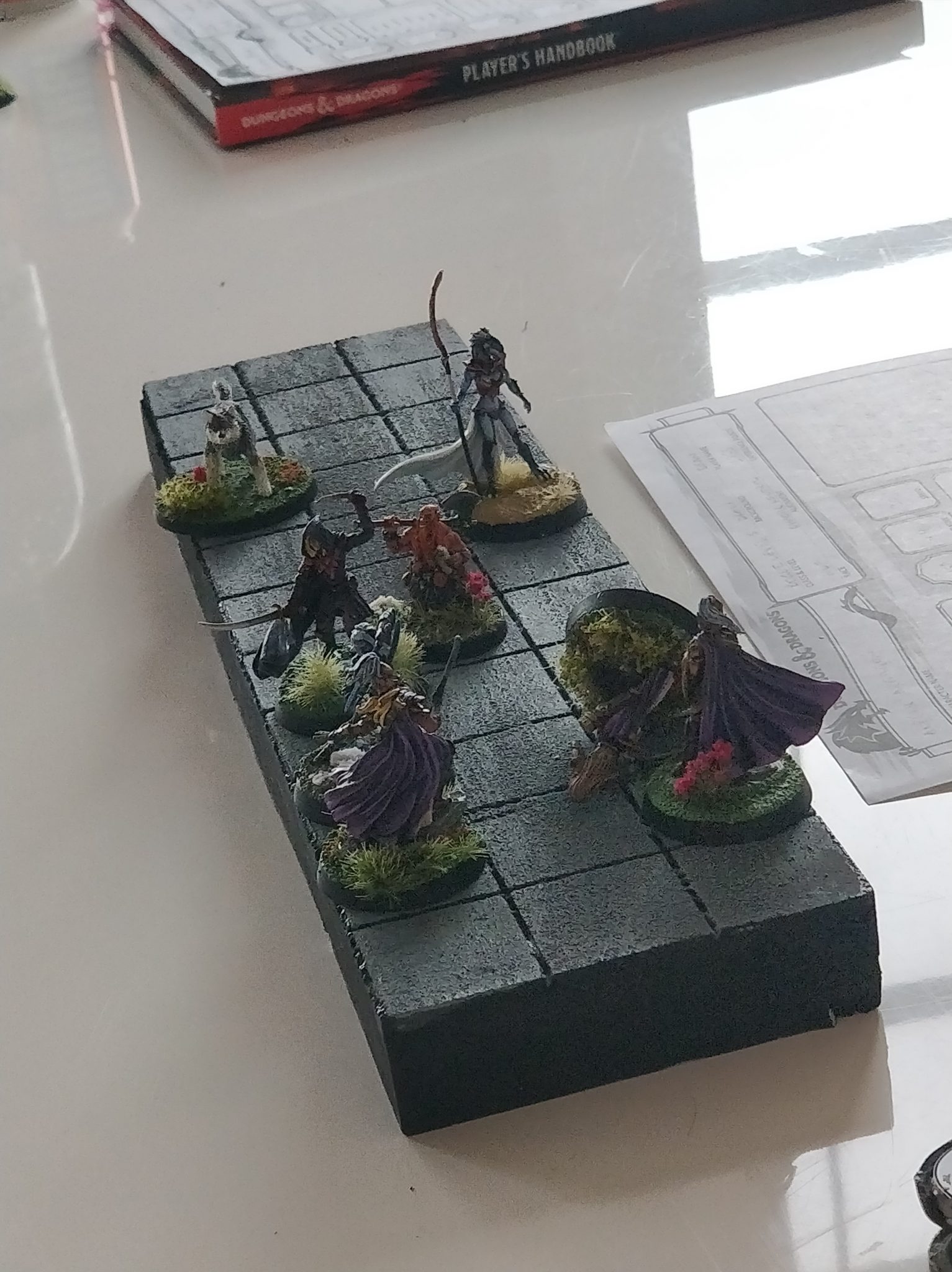 Outside the War Council

Having defeated the elven guards keeping one alive and bound, the party found the last guard dead and the Eternal Flame gone.

But with the guidance and the tracking, the party found their way to the War Council, an underground bunker used by the Elven leadership in old days during the great wars.

Alfein, the Drow Rogue, scouted ahead and found a rambling elven man who died in his arms. The party caught up with the Rogue and Alaris, the Elven Ranger, could explain that this was indeed the right-hand-man of her father, the very same elf she had seen carrying out sacrificial rituals.

Note, a chunk of content was lost here, which leaves more loose ends. See end of this page.

Stepping inside the entrance to the War Council the party faced three doors: The ornamented centre door leading directly down to the war council, now locked with an ice lock and a fire lock, and two shabby and recently made make-shift doors on either side, one looking like burned coal on the edges and clearly opening into something hot, the other ice rimmed and clearly opening into something cold.

The party decided to force the bound elven guard to open the frosty door. Unfortunately the shock of the cold door shot up through his arm and took away the last breathe of life from him. But the door was opened. The second door, the party opened by using acid splash on the handle and just kicking in the door.

The idea with the two doors and what lay behind is a simpler version of Runehammer’s “Room Design: Fire and Ice” video. 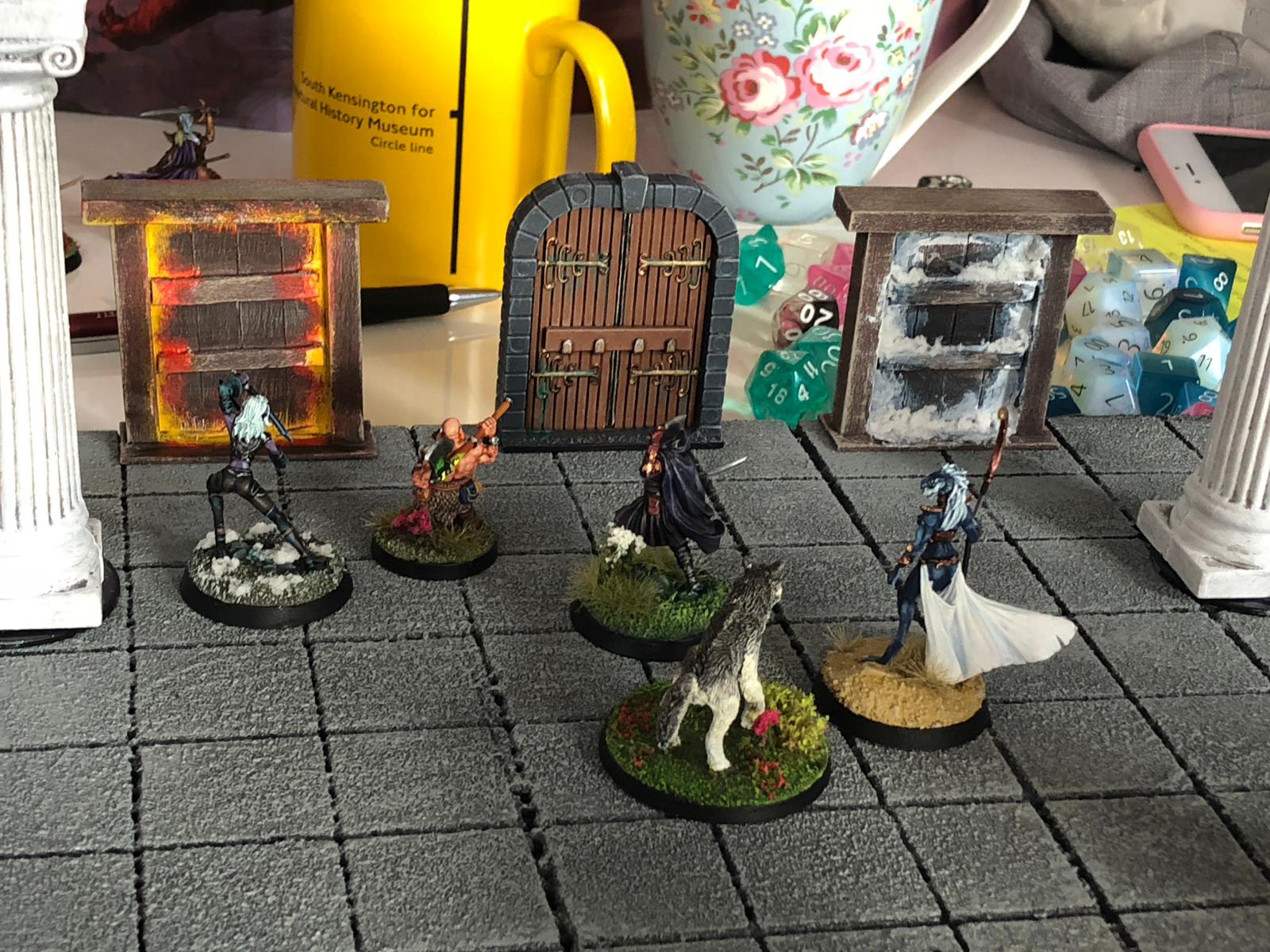 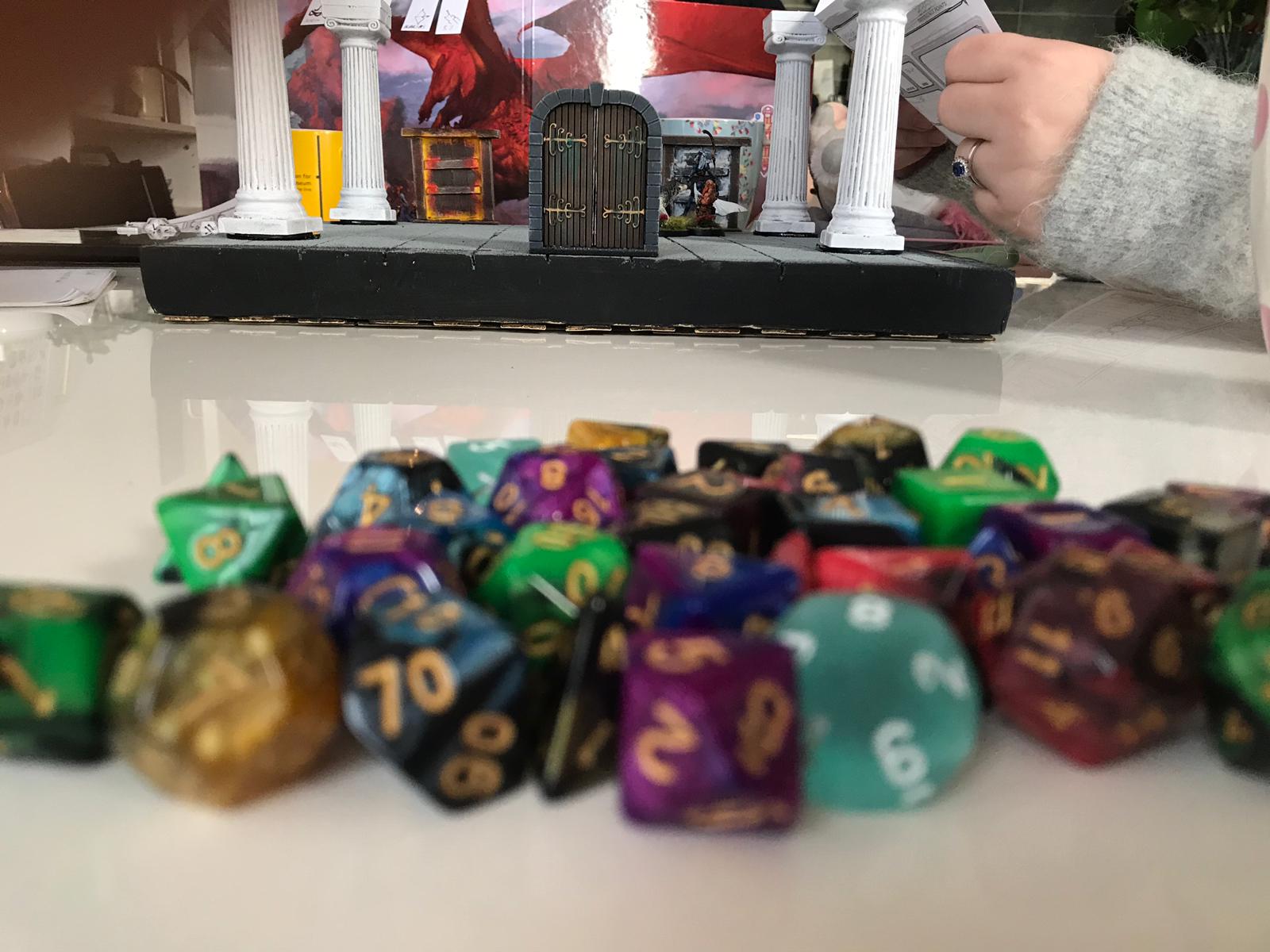 The party decided to enter the frozen room first. Here they faced a pack of ‘Frost bites’ as well as a hovering, but chained, winged demon skeleton with a frost key around its neck.

The room has 3 elements:

I used my Ice and Snow Gaming Board for this room. 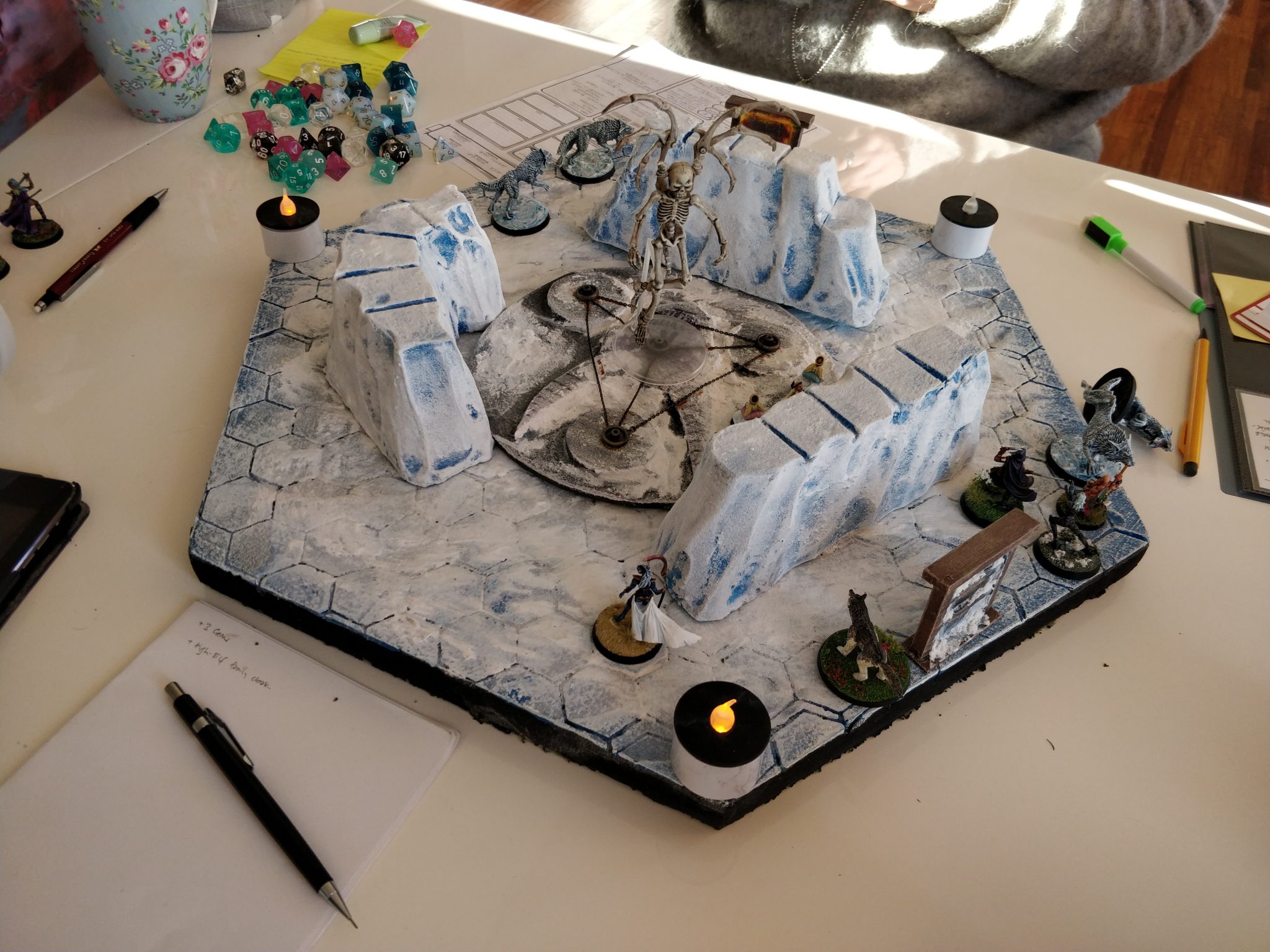 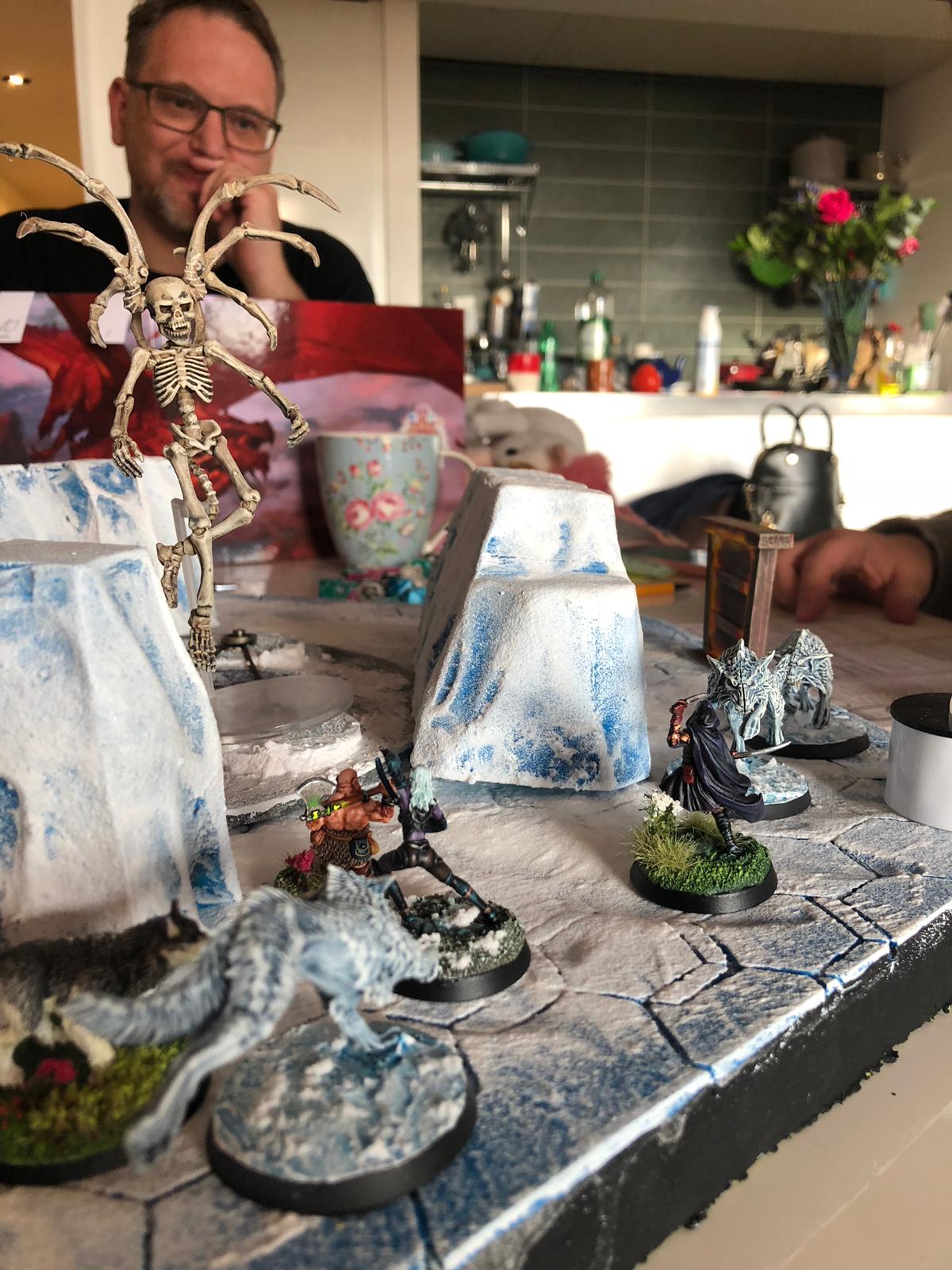 One of the players caught me sniggering behind my DM screen.

Back-tracking to the entrance, the party took a short rest to catch their breath before entering the fire room, where they faced a Nightmare, the very same type of creature Varona had wanted to create from the Unicorn. The Nightmare had the fire key around its neck.

As the party started planning their approach across the lava pit, skeletons began to emerge and the lava started rising.

This room has 3 elements:

The players went through this room as a warm knife through butter. Not only did the manage, by chance to lock the lava in place just before it started flooding the lower rises, they also killed the Nightmare in record time. Goes to show PCs can be crazy deadly.

I used my Lava Inferno Gaming Board for this room. 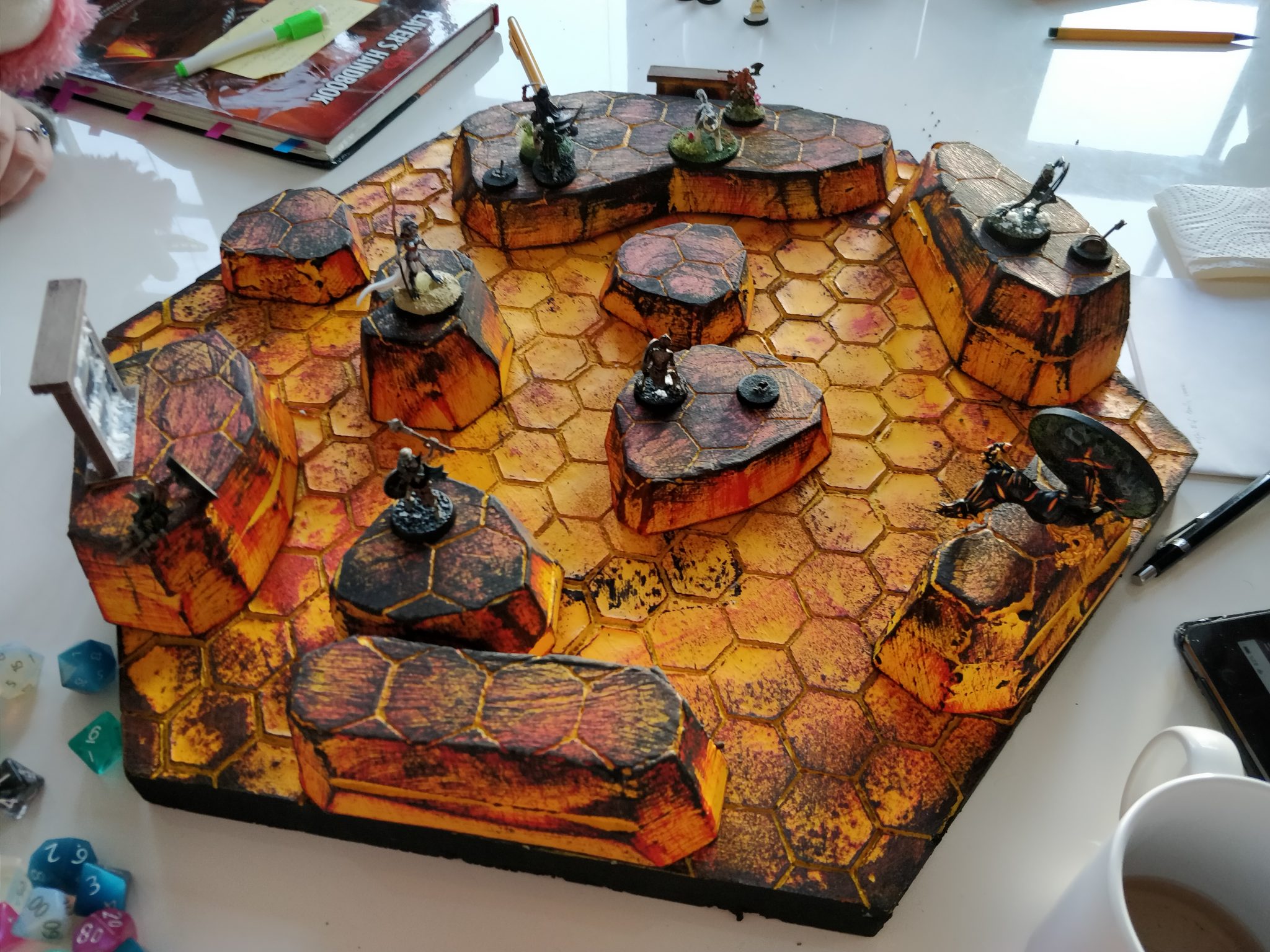 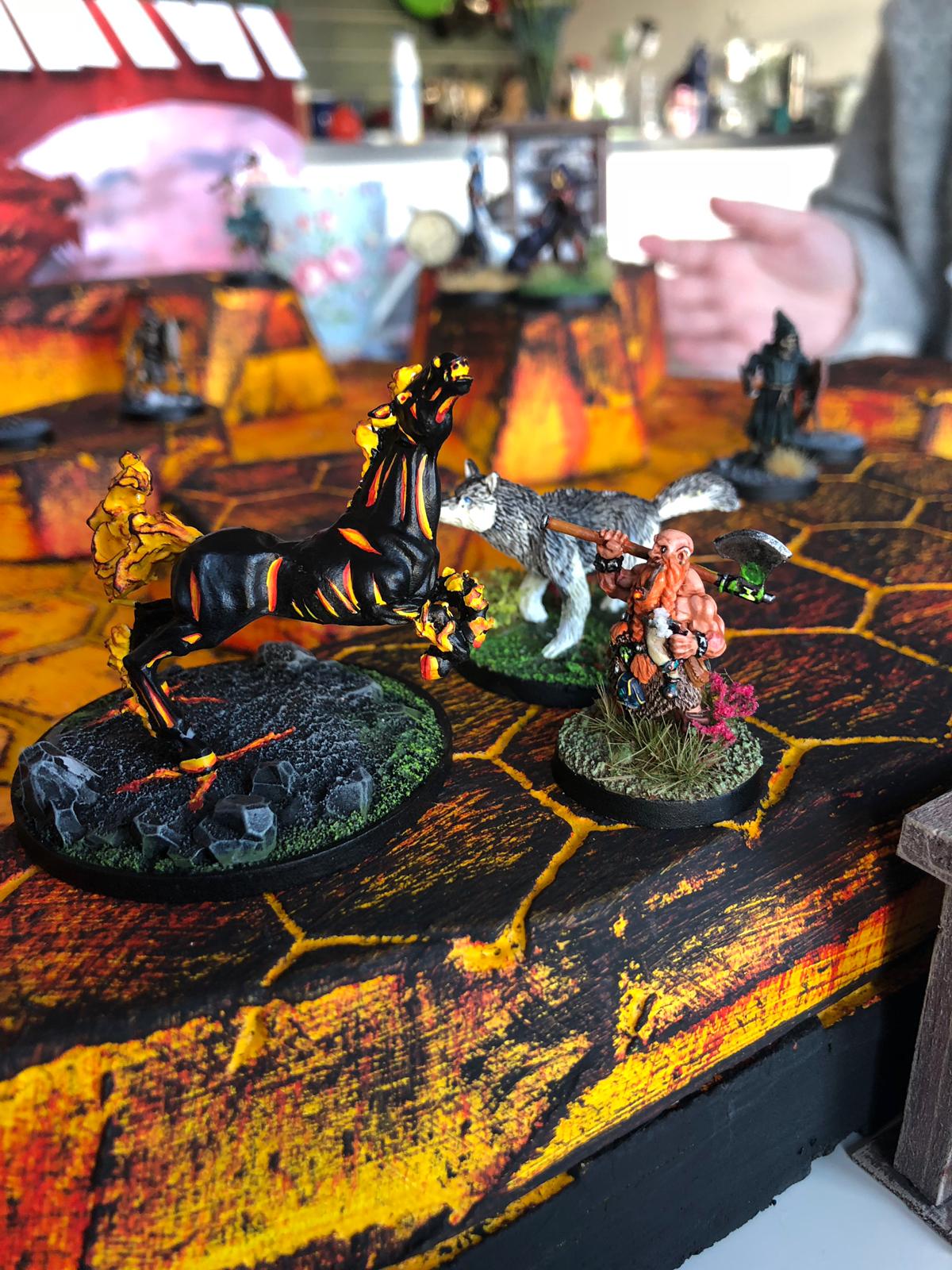 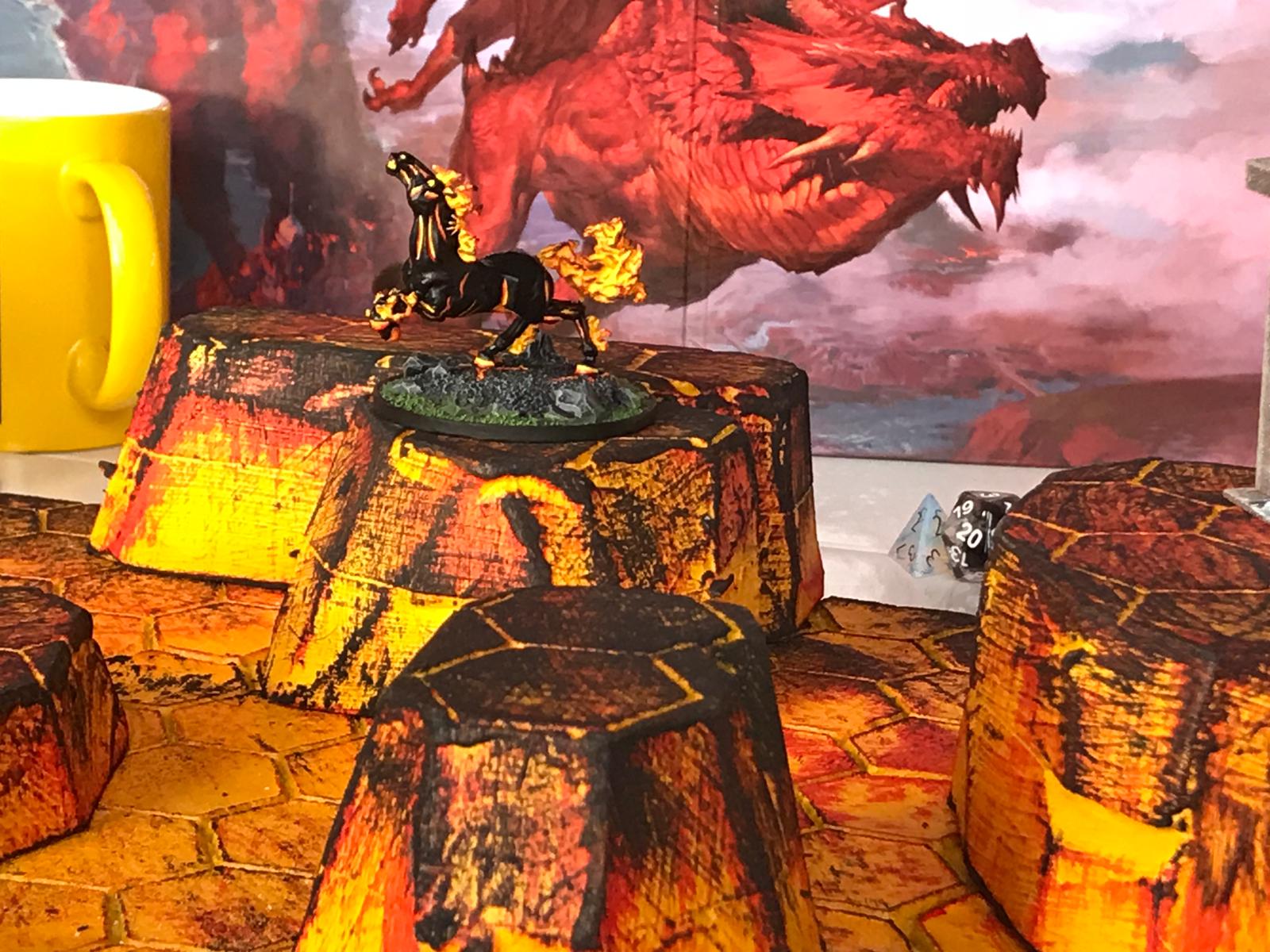 Entering the War Council and AI cards for monsters

The party entered the War Council. The Eternal Flame at the far right corner, the Ever Frost at the left, both having their power drained through two elemental Deathlocks and redirected to Varona standing in the middle and in turn she redirected the energy to an ever growing mass of a never before see colour.

The party started the attack but for a while Varona simply shouted at them to stop as they were preventing her from creating a weapon to kill her father, but in the end the party ignored the warnings and continued the attack.

A while back I saw a video by Runehammer called “Build AI for your Monsters!“, where he goes through some ways of running the boss monsters. Summary:

I tried the AI controlled method for both the Demon Skeleton and the Nightmare and they had limited success due to the party’s ingenuity. BUT for Varona and her two supporting Deathlocks, the AI cards proved very powerful and in a few cases I was literally cringing of what would come next but stopped myself from nerfing them.

The result was two downed characters in the process of the battle and even made the bosses cast Fireball, something I would never have done as 8D6 seems like a crazy amount of damage. However, of three characters hit, only one went down from the fireball. Granted the other two were barely hanging in there, but it goes to show how tough a lvl 4 party actually is. 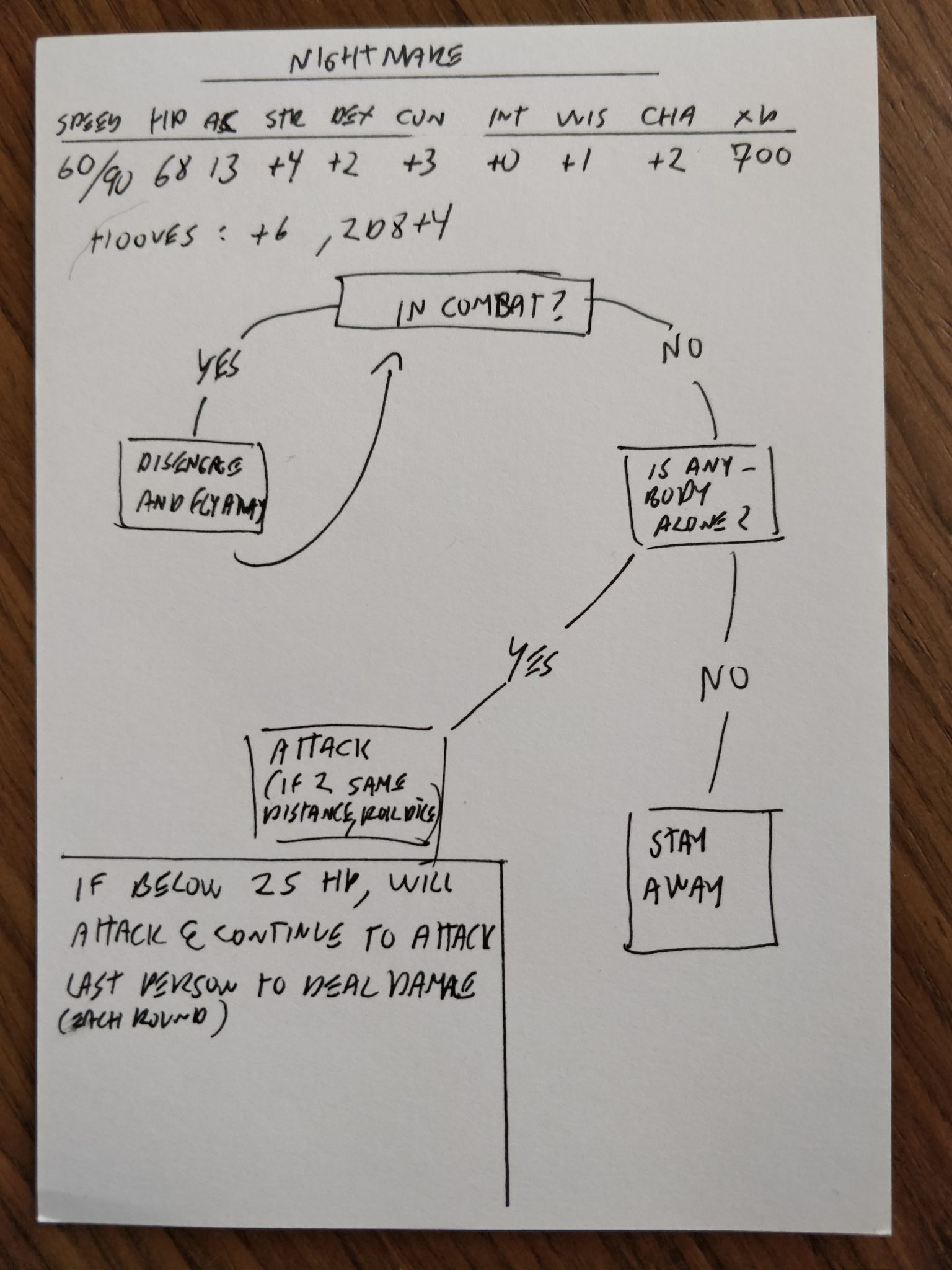 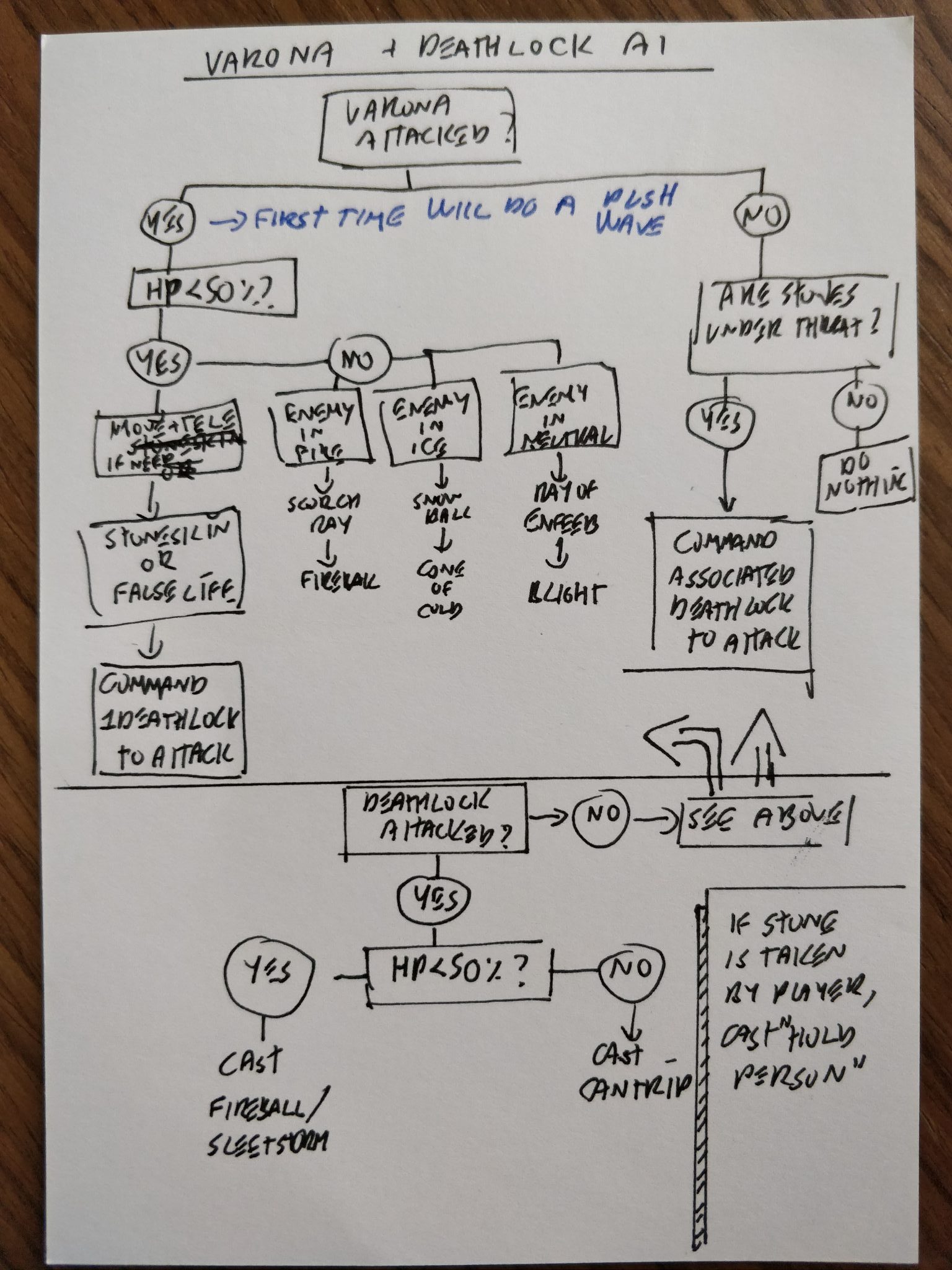 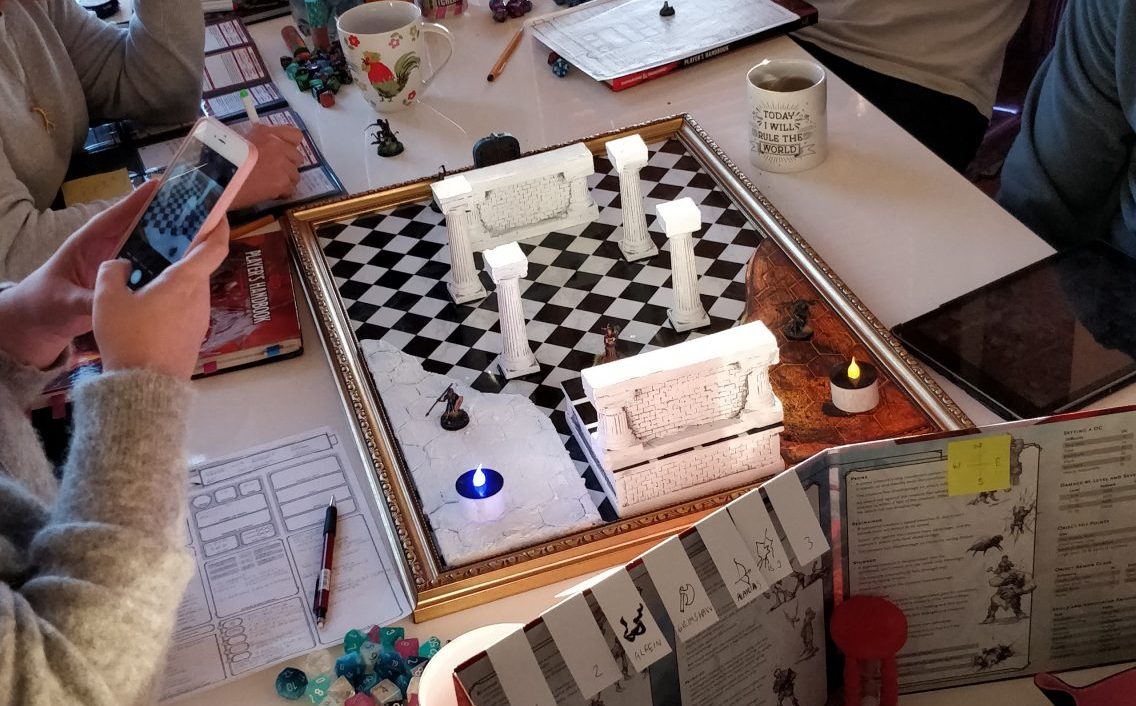 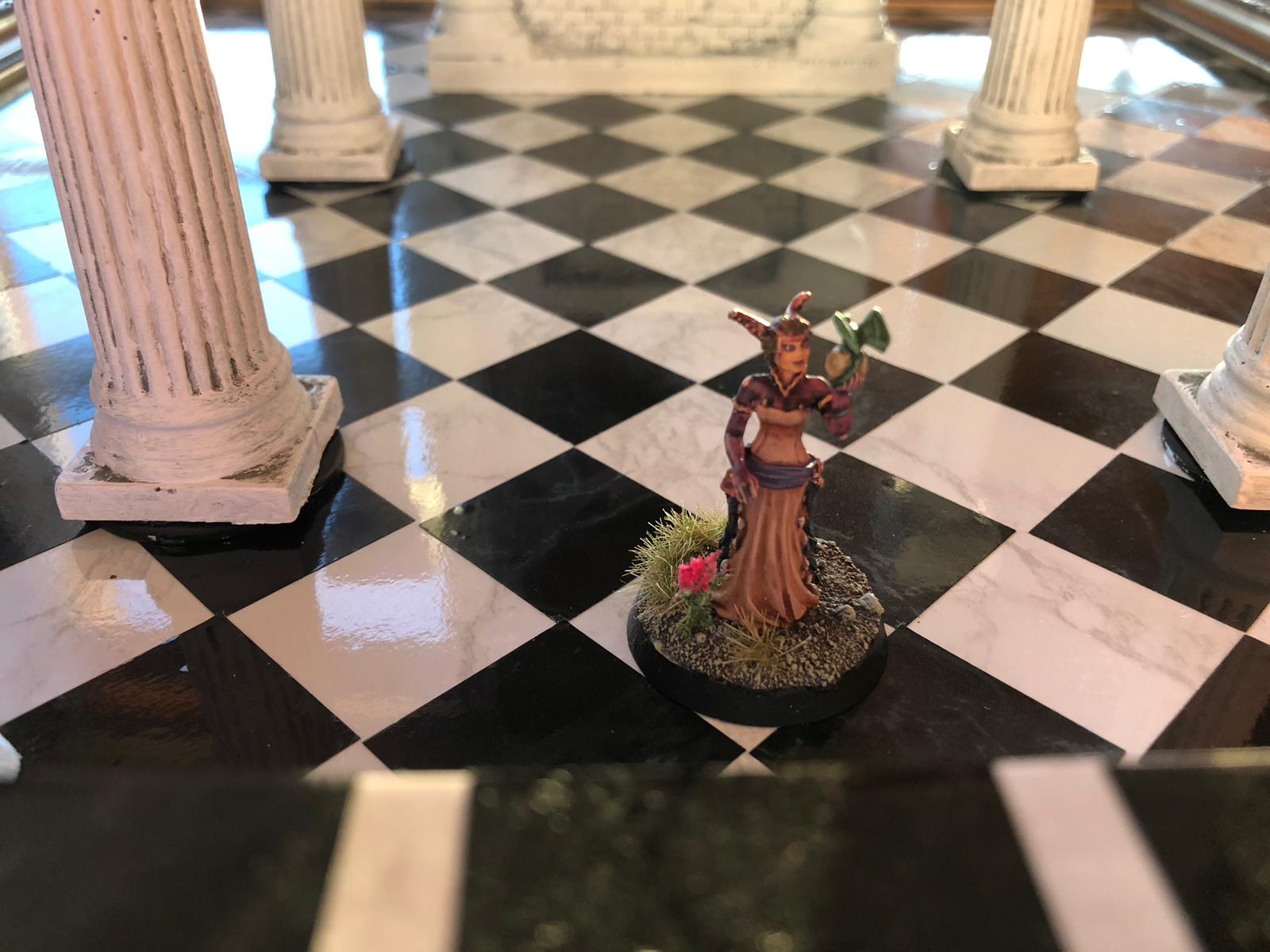 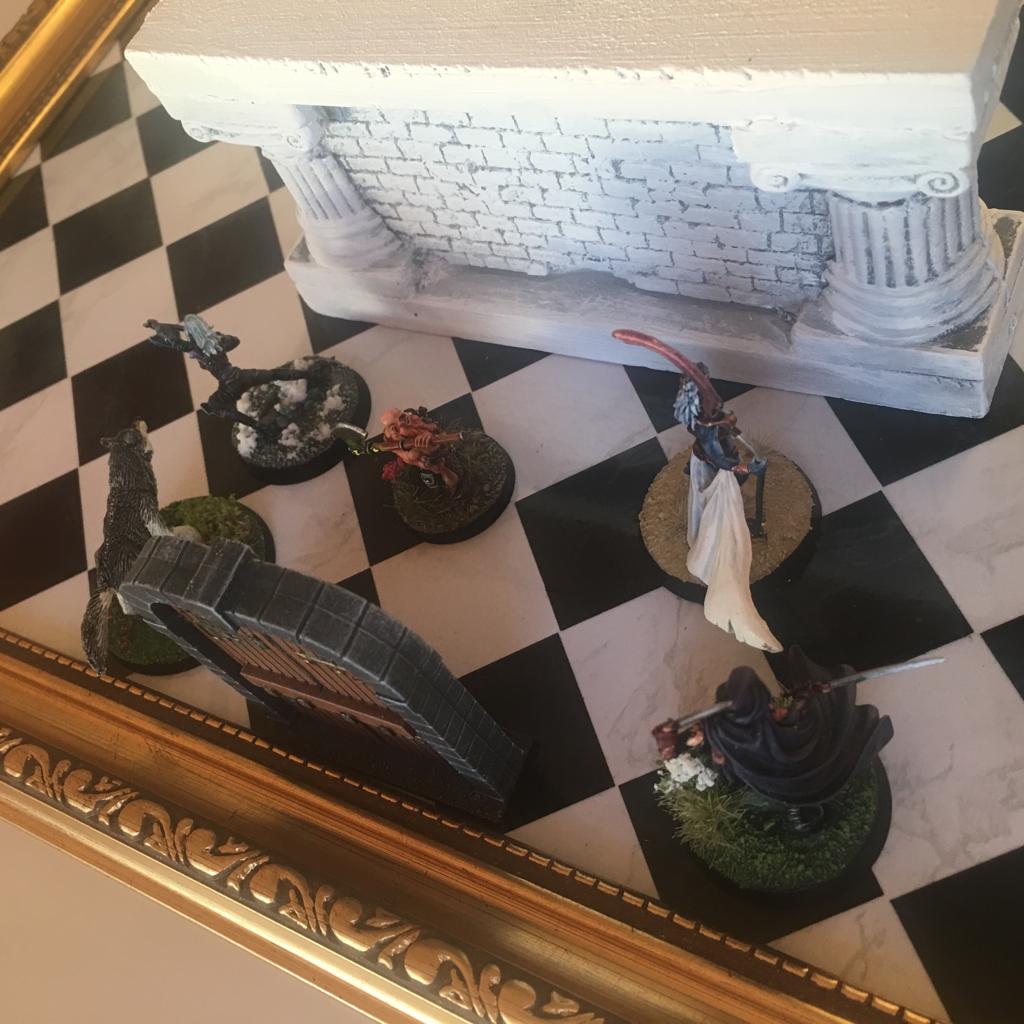 “No you fools”, shouted the Necromancer Varona Stillborn, Daughter of the Unseeing Eye as the adventurers killed the two Deathlocks that had been her conduits to the raw energy from the primal elementals.

Drained from fending off the adventurer’s attacks, taking the direct hit of the raw energy from the primal elements without the Deathlocks as conduits, forced Varona to her knees. She knew all was lost and all she could do was contain the damage the new unknown force before she died.

“Run! Leave! I cannot contain it for long”, she shouted and the adventurers, her adversaries, but still people she respected in her twisted honourable logic.

The adventures, pausing for a second at this strange turn of attitude towards them, quickly gathered their fallen, one was raised on the fly, the other was dragged to the door by the wolf.

They kept running, looking back, but never stopping. They made it out on the streets with the unknown mass of energy having utterly engulfed and destroyed the War Council.

And it kept growing. And the party kept running. Warning people as they passed them, urging them to retreat and flee. And for a time it seemed it was all in vain as the mass kept growing destroying houses and entire blocks.

Suddenly the mass retreated will full force as it imploded into nothing. The immense force of the implosion, destroyed a thousand homes and lives with it and the sheer force brought the two halves of the Twin Omnitropolis crashing together,

A month later the damage had been catalogued. Thousands dead, but given the force of the unknown mass of energy, it also become clear that Varona’s sacrifice saved the entire Omnitropolis from being destroyed, but why?

The party stayed in the aftermath to help with the rescue and clean up after the incident. The High Queen made a full recovery and while the undead dragons proved real, they turned out to be nothing but animated corpses made to fly as a distraction only.

As the party sits around what has become their regular table at the inn, they finally have the head space to consider the events and the more they think the more unanswered questions appear:

A woman suddenly appears out of the shadows, almost like out of nowhere.

“Do you realise what you have done”, she says in a calm chilling voice.

“My sister was creating a weapon to destroy our father before it is too late. Now almost all home is lost. The only hope that remains lies with my other sister. She has the last weapon that can injure our father.”

“However, I am… prevented from approaching her. I task you with finding her and retrieving the weapon.”

As this point she steps into the light and you see she is a Vampire: “Should you fail, your lives are forfeit! I shall see to it myself personally.”

With that, she explodes into a swarm of bats and disappears into the night. 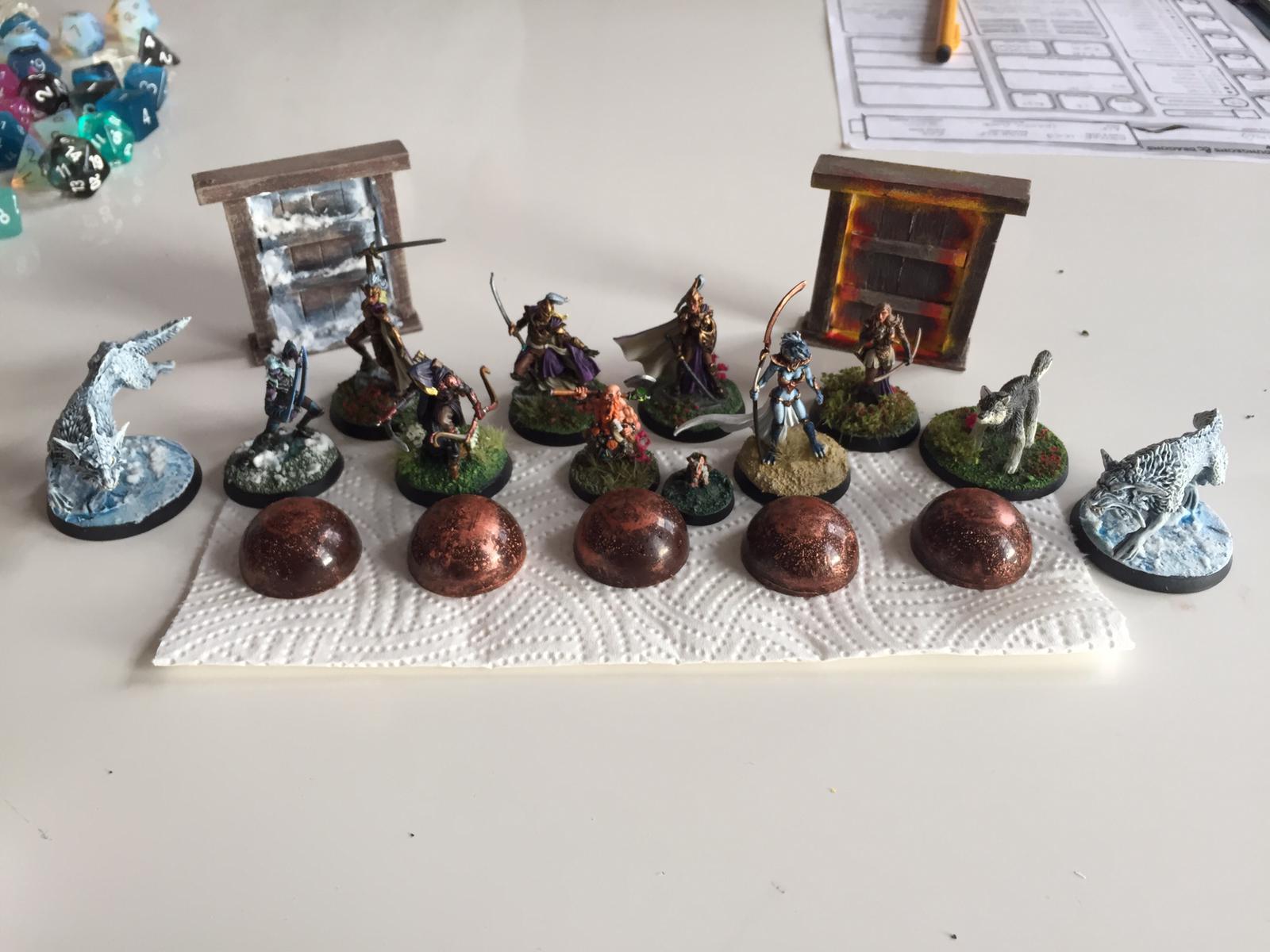 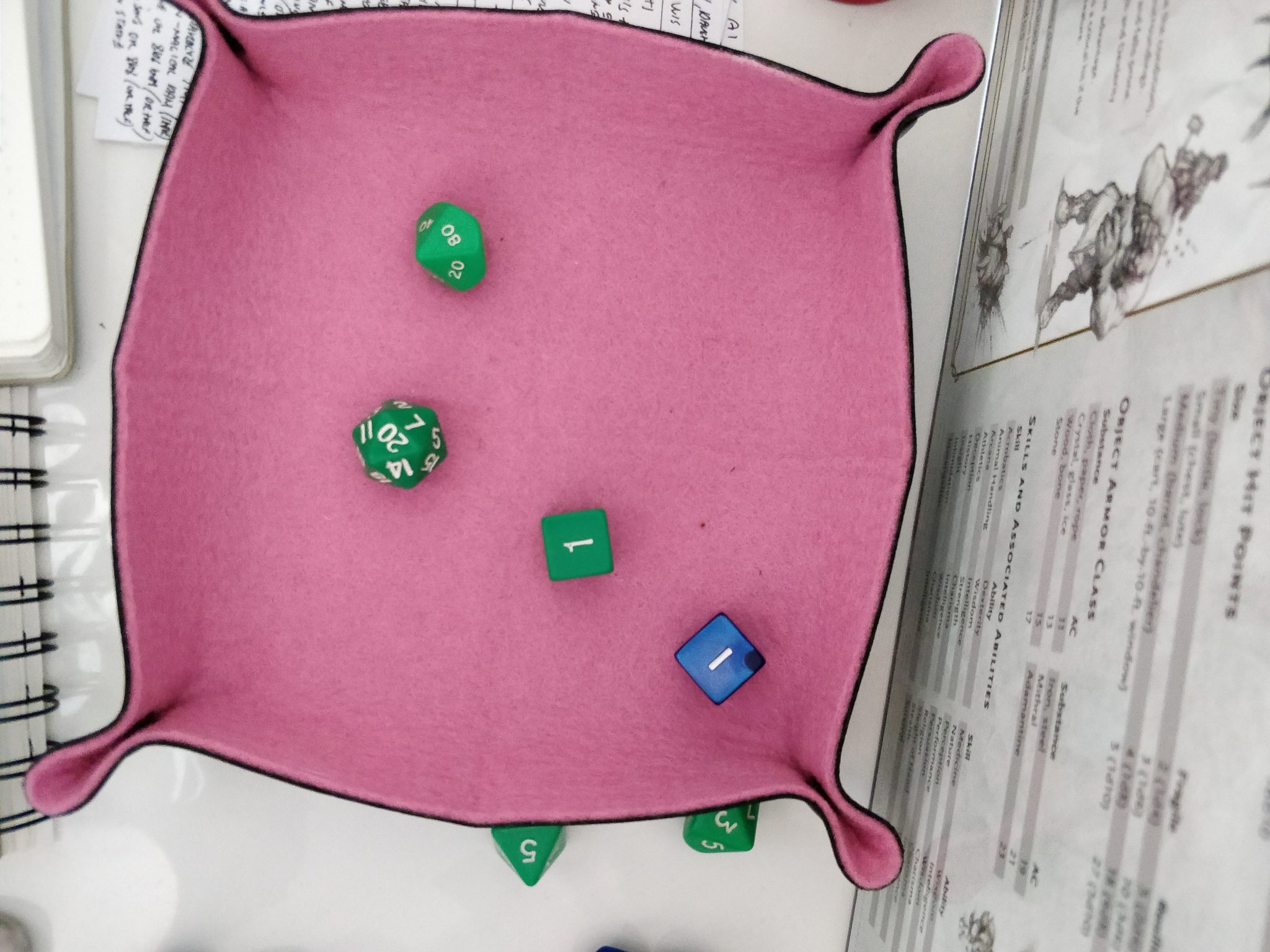 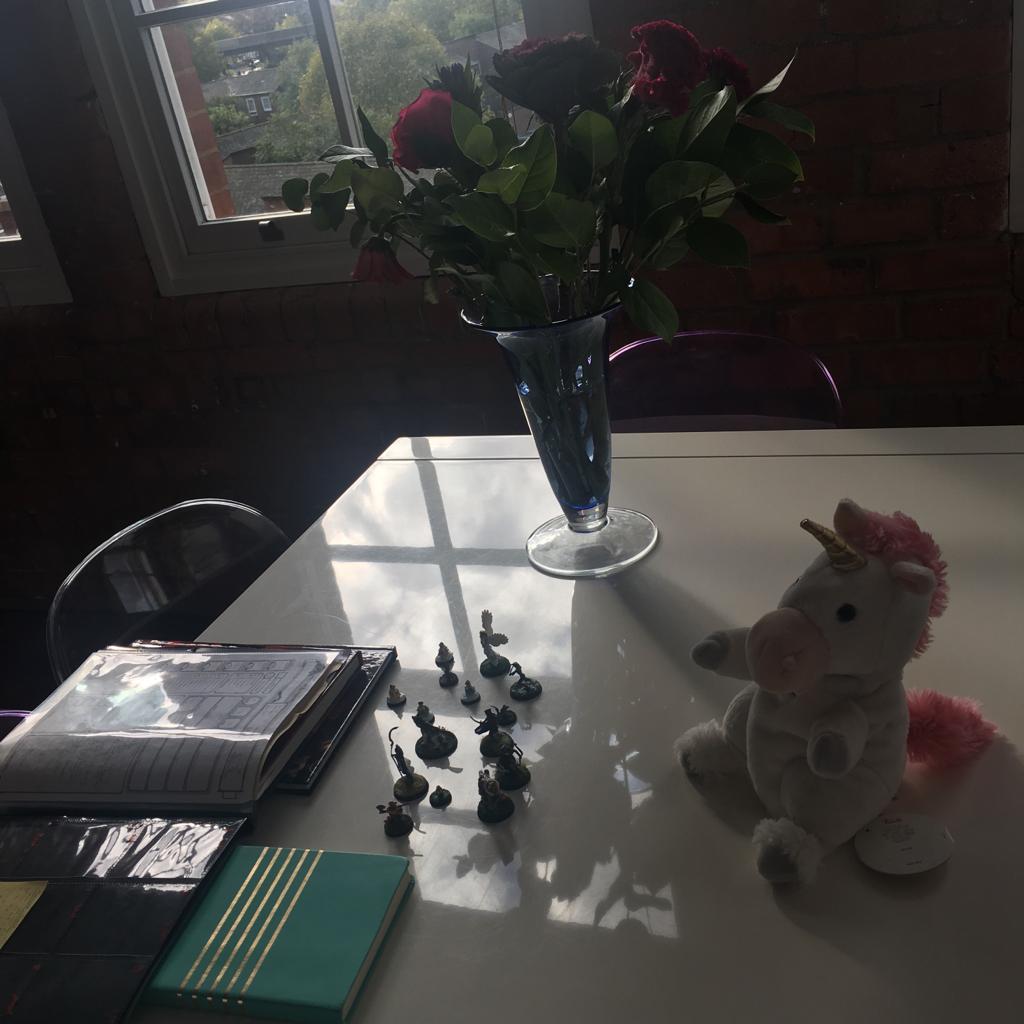