So… Just to be clear this game did NOT go as planned.

A Total Party Kill can be mighty epic and fill the table with satisfaction eventhough every character got killed. However, a Wipe Out where basically the party utterly fails is never fun and unfortunately this spin-off chapter turn into exactly that.

In hindsight I made two critical errors as the Dungeon Master:

i walked out of this game thinking it was a total cluster fuck, but interestingly I also learned a lot about what the players actually wanted from the game.

One player, who was new to roleplaying games when we started earlier this year, said this was one of her favourite games as it forced them to think and act as a team. She liked that there was lots of character development (I’ll come to that further down in Social Encounters section)

This was backed up by the rest of the group and one said there were valuable lessons in thinking and working with third parties (NPCs). 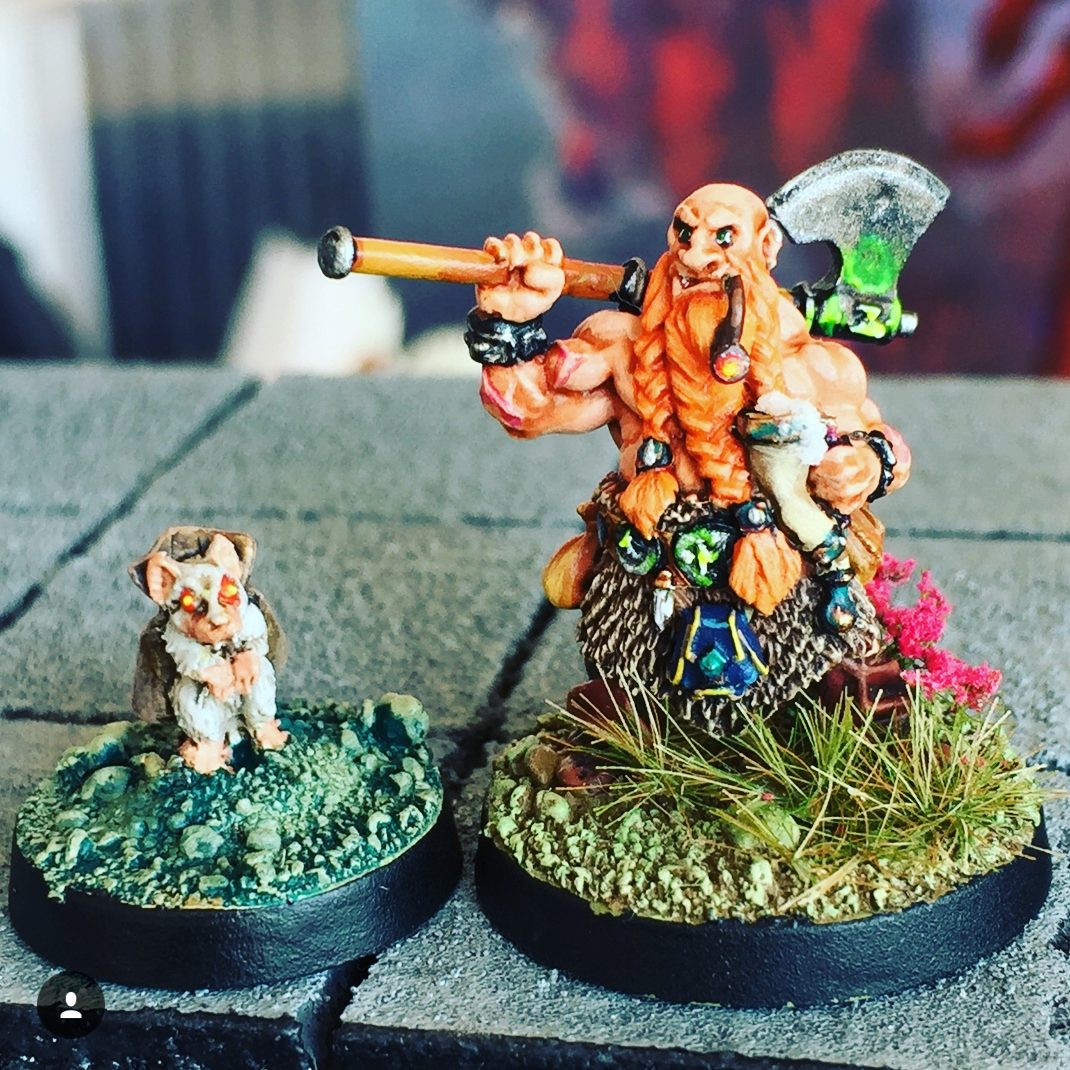 Shortly after reaching the harbour city, Selbina, Alaris, the elven ranger left to cross the Flaming Sea to act as the vanguard to prepare for the rest of the group’s arrival to the Elven Omnitropolis, Lyrayara.

) , the group boarded the airship “The Singing Swan” managed by the Elven Captain Tarathiel and his first mate the half-ogre, Rodrok.

Social Encounters in the air

I wanted to test out some awesome tips on using game mechanics for social encounters found in Runehammer’s youtube video Social Encounters: Decoded.

The base idea was to create some conflicts between two social groups on the ship: The Elven captain and the half-ogre first mate and the slick, but untrustworthy band led by Elaine Marley. Depending on how players acted, I would score their relationship with each group. This score would influence events later down the storyline. more on that later, but here were the social encounters:

Suddenly another airship comes sailing through the clouds. It is full with Goblin Pirates including Goblins with cannons.

A fierce and loud battle takes place… which unfortunately attracts a nearby Wyvern, that comes crashing down on both ships and after a few rounds of battle, it tries to flee but is caught up in the sails and drags both ships down with it. 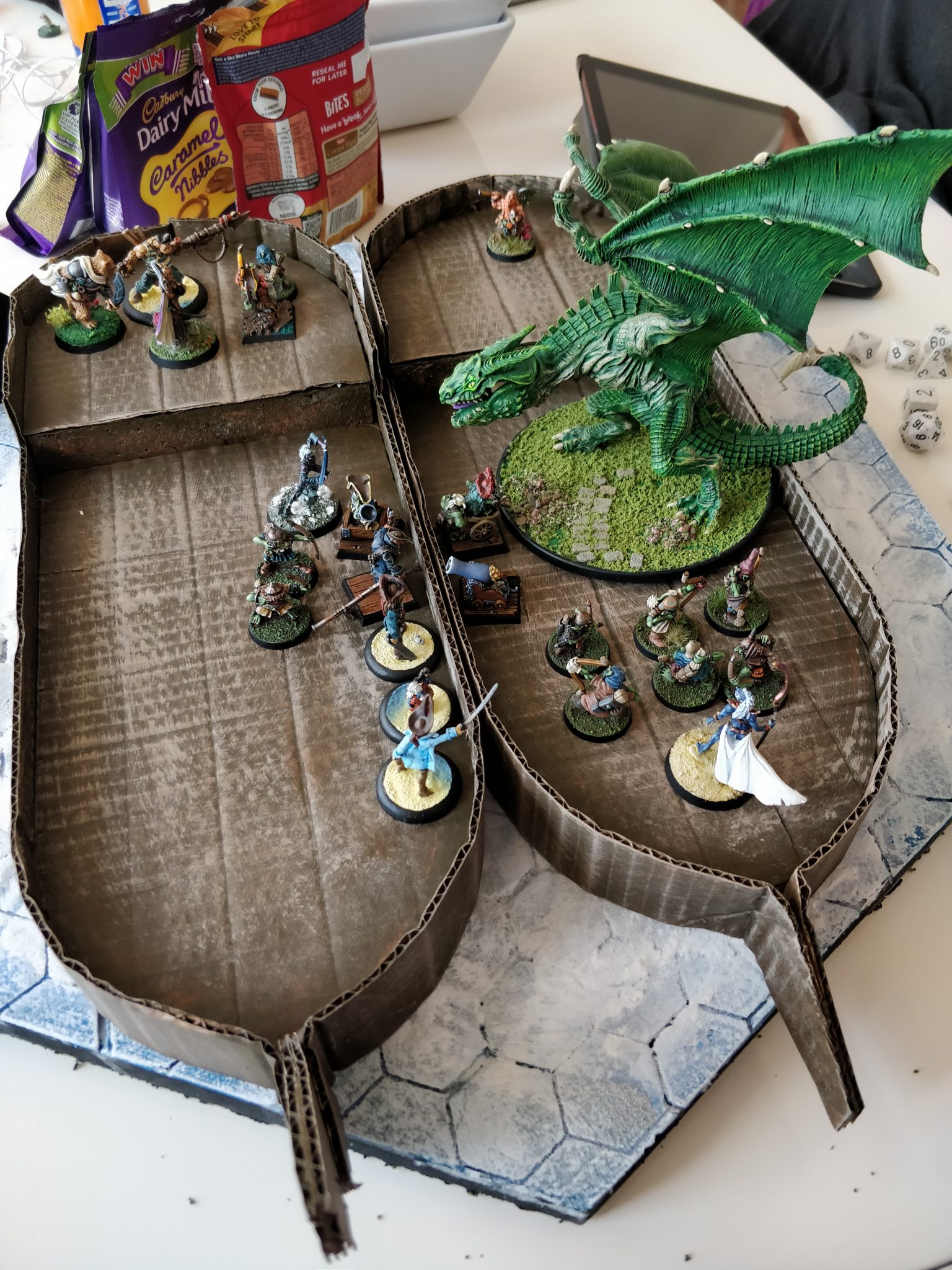 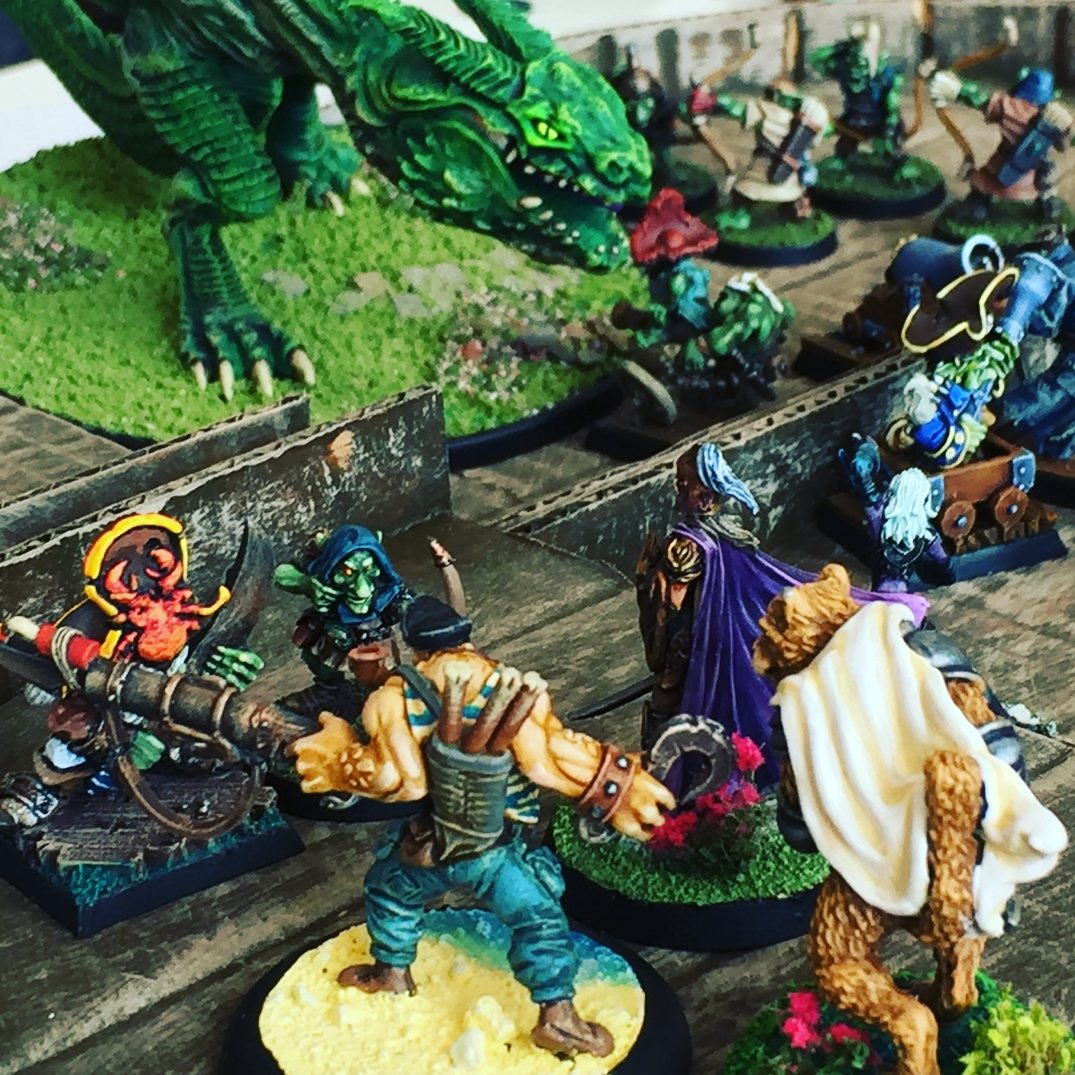 At night, the party wakes up washed up on the shore of an island. They quickly group up with Captain Tarathiel and Rodrok as well as Elaine and her band.

In the horizon they can see the a fair amount of the Goblin Pirates have also washed up.

Captain Tarathiel explains there is a life boat with limited carrying capacity on the top of the dormant volcano at the other side of the island and from the movements of the Goblins, it seems they know this too. The race is one! (see my earlier note of changing to a living and dynamic environment)

The grave of Captain Cornelius Seagrave 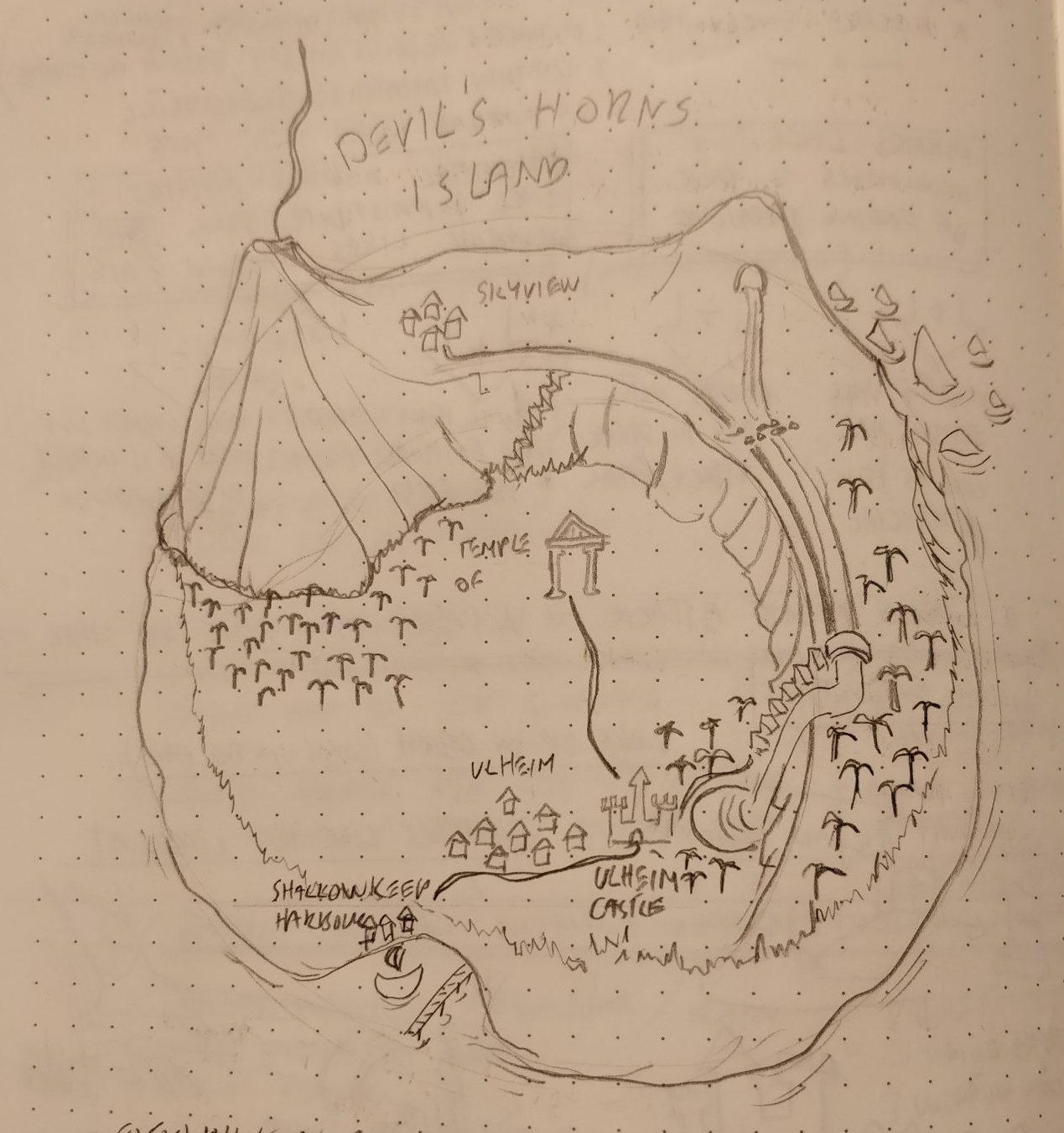 Scaling the steep hill together to cross the island to get to the life boat, the group comes to an ancient grave marked as the grave of Captain Cornelius Seagrave.

The Captain sees this exercise as a waste of time and him and Rodrok starts leaving to continue towards the life boat (note, the social score the players have with the Captain although not stellar is positive so if he would wait by the life boat as long as he can).

Elaine and her band smells gold so they remain.

The tombstone has a map on it that the party rubs down for a copy (see my notes on the mistake of giving the party a map). the tombstone also has a riddle saying:

Captain Cornelious Seagrave
Never did he find the treasure of his dreams
So now here is the map for you to take for free
His tongue now forever silent
Forever will he now keep the key.

Having read the riddle, the party opens the grave (after some debate about disturbing the rest of the Cornelious) and the see a key hanging from his neck, which they take.

After having exited the dug up grave, the party has another debate and while this is going on, one of Marley’s band jumps in the grave and suddenly her and the band leaves quietly while the party continues to debate.

Note, at the party has taken a fake key that was hung around the body of Cornelious. The real key was in his mouth (under his tongue) and Marley’s man found it hence the quick departure.

As the party, now alone, left the clearing where the grave was found, the soon found themselves fighting goblin pirates in an effort to cross a bridge.

The party dispatched the goblins in short order, but while the fight took place, Elaine and her band made good progress and barricaded themselves in a castle further down the road. 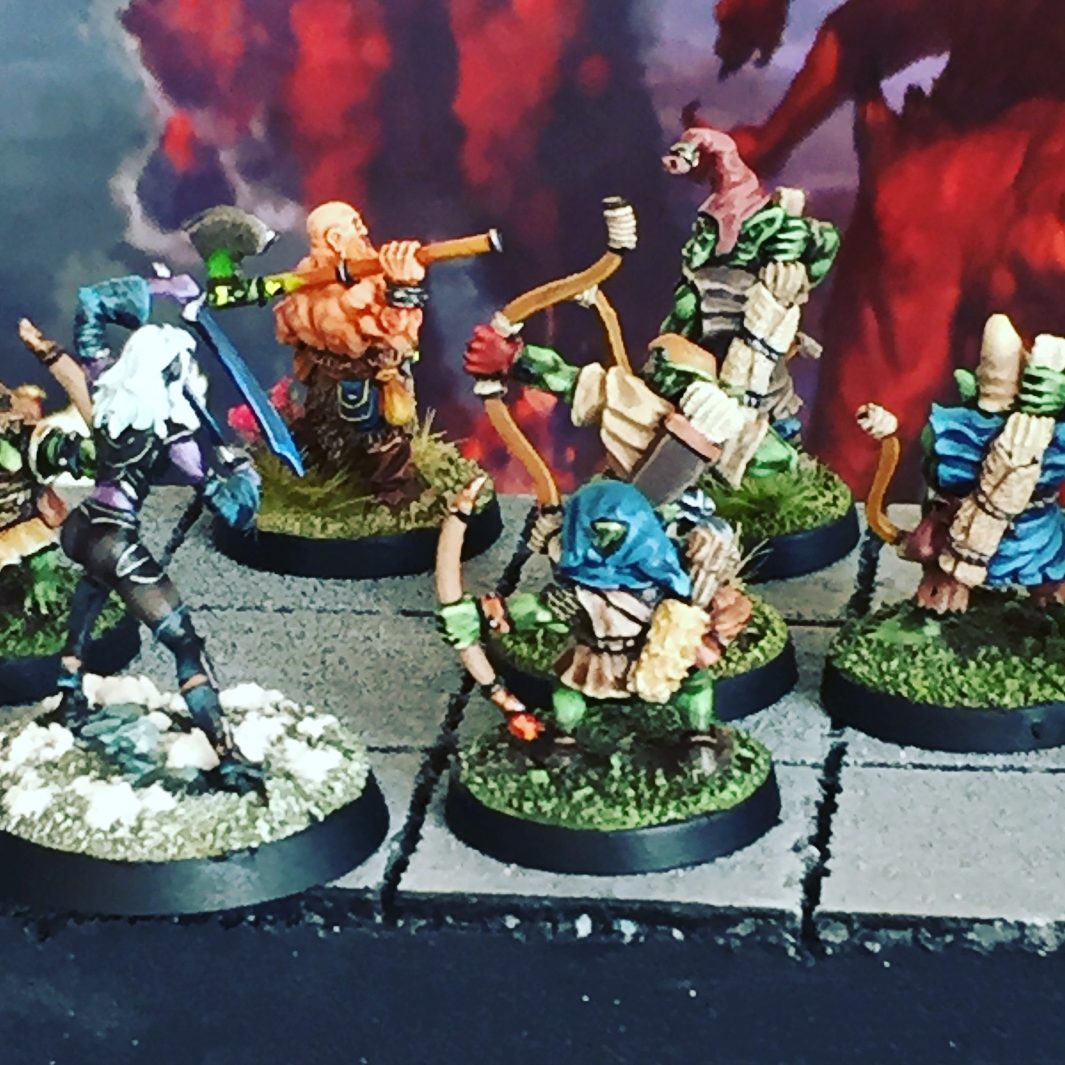 Having spent the night in the nearby town ruins, the party now left to find the treasure in the temple marked on the map. They did find the temple but alas, the key was fake so they were unable to open the treasure.

Realising the mistake, the party now back-tracked to the castle only to find Elaine and her band killed by the now raised Cornelious Seagrave and his undead sailors.

Back-tracking further back to the grave, the party was again met with disappointment as the grave was now empty (Seagrave has retreated into the ocean with his key).

Captain Tarathiel and first-mate Rodrok had long ago reached the life boat, but having fought off Goblin Pirates, they now faced the returning Wyvern and unable to hold the line much further, they had to make the hard choice of launching the life boat and flee.

The party having just found disappointment at the hole that was once the home of Captain Cornelious Seagrave’s corpse, saw the life boat take off in the distance.

To simulate the party being stuck on the island for several weeks, I used a game mechanic from an earlier version of Dungeons & Dragons called “Skills Challenge” , which I first learned about in Matt Colville’s youtube video: “Skill Challenges! Running the Game #21″ . On that note, Matt’s “Running the Game” series have been a tremendous help for me getting back in the Dungeon Master chair after 20 years away from the hobby. Highly recommended.

Unfortunately, the party failed the Skills Challenge and and lost 1 points of CON due to hunger, illness and whatever else fun stuff you find on a deserted island.

Eventually, the party was rescued and are now making their way to meet Alaris at the gates of theElven Omnitropolis, Lyrayara.