It is the day after the official Warmachine torunament at AGS Con 05 with a slightly Cryx-y feel to it (4 Cryx armies vs 1 Cygnar and 1 Khador) and a somewhat recognisable list of players (4 from my local club PEWC).

My force used was (I had two forces but only used this one):

A good day of gaming nevertheless and congratulations to Angrychef for winning the tournament. Photos below are from my 3 games.

First game was my only game agaisnt a non PEWC player named Pete.

Pete’s Cryx was led by Skarre, whom I have never played with or against and had 2 mechanithrall units, 2 Seethers(!) and a Bile Thrall unit.

It started out really well for Pete quickly surrounding the objective spot in the center, I then did a massive Mechanithrall attack on his center, failing to kill the Grasped Seether but managed to kill the other Seether, which he countered by exploding Bile Thralls all over the place killing lots.

I had been circling my Pistol Wraiths around to get Skarre but we were suddenly told we had 7 minutes left so they never got to see much action other than killing Pete’s Skarlock. The last round was a hektic attempt from me to even the scores and by the end of the round I won 9-5!

Great game. Best of the day.

Pete and his 2 Seether Cryx force 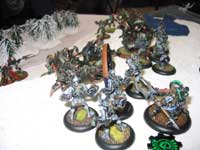 Second game was against Angrychef and with his Cryx force quickly grapping all the good positions there wasn’t a lot I could do.

A chance appeared for me in the middle of the game to target the Iron Lich leading Iains forces, but with my army spread out too much I failed to kill him altough he took a lot of damage my Skarlock was just out of range with venom. Bugger!

This happy go lucky attack left my army wide open (even more than before) and it was only a matter of time before Iain wiped out my entire army with a bunch of rather brilliant and well though moves.

My Cryx surveying the enemy Cryx

Angrychef taking up defensive position in the center ruins

Last game was a against Chaz’ Cygnar led by Brisbane from Apothesis. Let me just say he is my favorite Cygnar caster from this day forth. Very cool Warcaster with an equally cool miniature.

Chaz dug in with various spells, but remembering how hard the enhanced Stormblads unit was from our last game I used most of my force to deal with them. Looking back it was way overkill but it worked and with a couple of bad dice roll on Chaz’ behalf when firing Brisbane’s gun (Pistol Wraith with 2 Soul Tokens survived with 1 wound), it didn’t take long to cast grippling grasp on Brisbane, pop Denny’s feat and circle the Pistol Wraith with two soul tokens to finish of Brisbane. 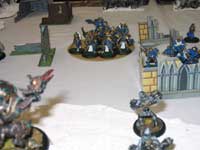 Cygnar digging in with Brisbanes spells 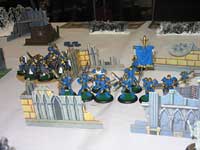 Most of Cryx attackes the Stormblades