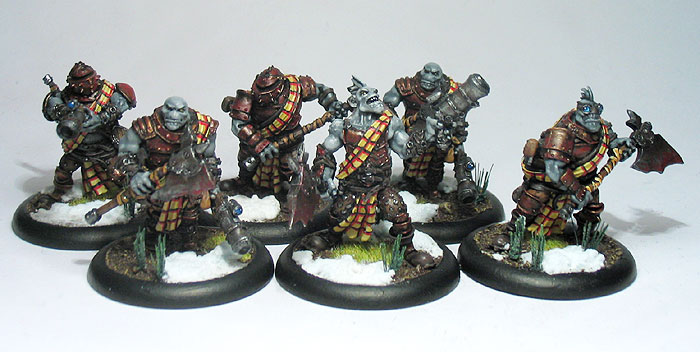 Each players starts with 500GC (Gold Coins) which can be spend on buying troops before we begin or be saved for later. You do not have to use all GCs but remember you can later only buy troops in the City and Warjacks in the Warjacks Workshop.

Mercenaries are not alowed from the start but can be bought later.

Victory conditions
All games are untill one warcaster is dead. If you have lost 50% of your troops you are alowed to conceed the game.

Note: You never get VP for killing Warcasters.

Warjacks
Damaged Warjacks cost the same (hey, it’s not my fault you let it get damaged). You must play with 500 point if possible. For example if both players have 500 point worth miniatures then you cannot decide to play only 300 points. Only if one player has a lower point value in miniatures can you choose to play with lower point cost.

After the resource roll is made you are alowed to retired heavily damaged Warjacks. If a Warjack has 2/3 of its boxes filled you can remove it from your sheet.

Troops and solos
Only damage on Warjacks carry over from game to game. If the damage on a multiple LIFE trooper is half or more of his life, then the model is considered dead, but does not count towards VP since he/she/it did not die during the battle but later from his/here/its wounds.

If you have lost the leader of a unit but still have troops left, one of the troops is automatically upgraded to the leader. That goes for all units with a leader type figure.

One Mechanik can repair 1 damage box automatically at any resource location except the Ambush.

Before each game both roll a D6 and see what resources are available.

Cities has a lot to offer for the needing warbands.

Workshop: Roll a D6 to see if a particular workshop is available in this city. Repairs cost 50GC. Roll 2D6 and choose the highest. On a double add the result. Multiply the result by 5 and the result (repair result) is the number of damaged boxes you can repair. You choose where to allocate the repair result after the roll has been made.

Mercenaries: Roll a D6. On a 4+ the Mercenary you are looking for happens to be in the same city as you and is available for hire.

Seer: Pay 100GC to add or subtract 1 for the next resources roll you make.

You help a bunch of Gold Diggers and get your share of the find.

You are attacked by The Black Brigands, a huge band of bandits but you manage to catch their leader and chase off the rest.

Note: If the Gang Leader has already been captured by another player, treat this as a City roll (see above).

Note that Scrap Thralls are considered a unit for this purpose only. Treat your Thralls as one unit.

You gain 3D6x10 GC next time you arrive in a city.

In each battle you face untill you reach a city you must use suitable model for the gang leader in the game. The Gang Leader will only defend himself and has to be with in 2″ of a miniature you control. If this is not the case he will run towards the nearest table edge.

If the Gang Leader is killed he is considered captured by the opposition.

Blessed by the God of Gangs: Only takes Damage from Magic or Ranged attack on 4+ on a D6. This protection is also in effect if he was not the intended target.

You find a hut in a forrest with an old, retired Warcaster. He agrees to help you.

The Magician can fix both Arch node and Cortext Damage. Repairs cost 100GC. Roll 3D6 and choose the highest. On a double or a triple add the result. Multiply the result by 5 and the result is the number of damaged boxes you can repair on one or more Warjacks, which you choose after the roll has been made.

Here you can buy new Warjacks. You can also get repairs for everything but Cortex and Archnode. Repairs costs 100GC. Roll 3D6 and choose the highest. On a double or a triple add the result. Multiply the result by 5 and the result is the number of damaged boxes you can repair on one or more Warjacks, which you choose after the roll has been made.

Leave me alone or I’ll turn you into a Toad!
After a few nice words (and beers) the Wizard agrees to help you.

In the next battle your warcaster have an extra spell to use (he forgets it after the battle). Roll a D8 and consult the chart below. Note if you roll a spell you already have, roll again.