DM note: So… the goal for the party last game was to open a portal to Mount Celestia from Phlegethos to allow the Fallen Angel Azrael to bring through her partner from her angelic days: The Angel Arcon.

They did, but being in the middle of a hairy battle with two dragons and endless Kobold minions, the party jump through the portal!

Moments like these are what makes DMing great as I did not see this coming! Suddenly I rethink the trajectory of the story AND had to scramble to make heavenly scenery pieces. 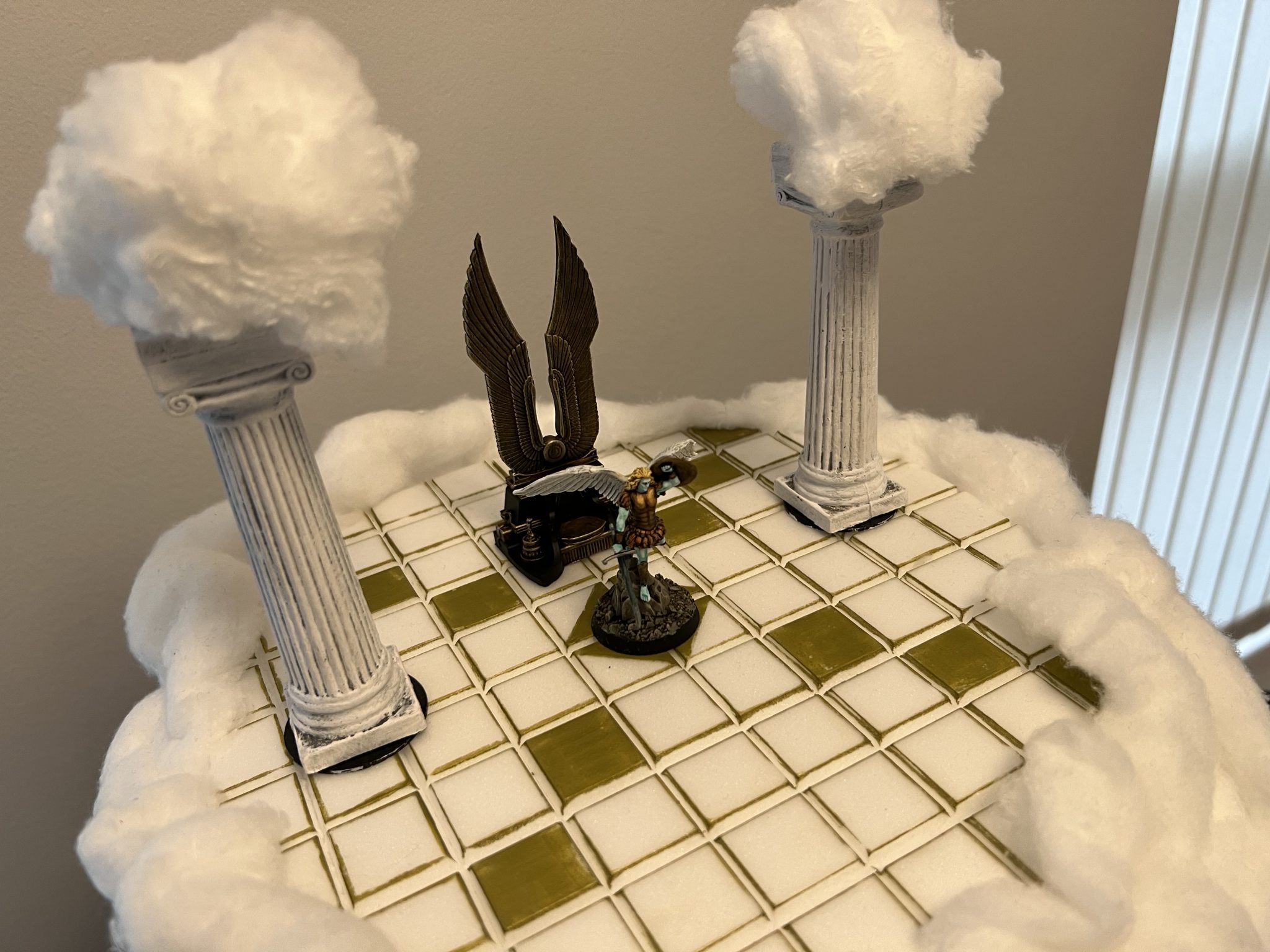 Archon greeted the the party having crashed through the portal finding themselves in the most beautiful and tranquil surroundings in the clouds around Mount Celestia. 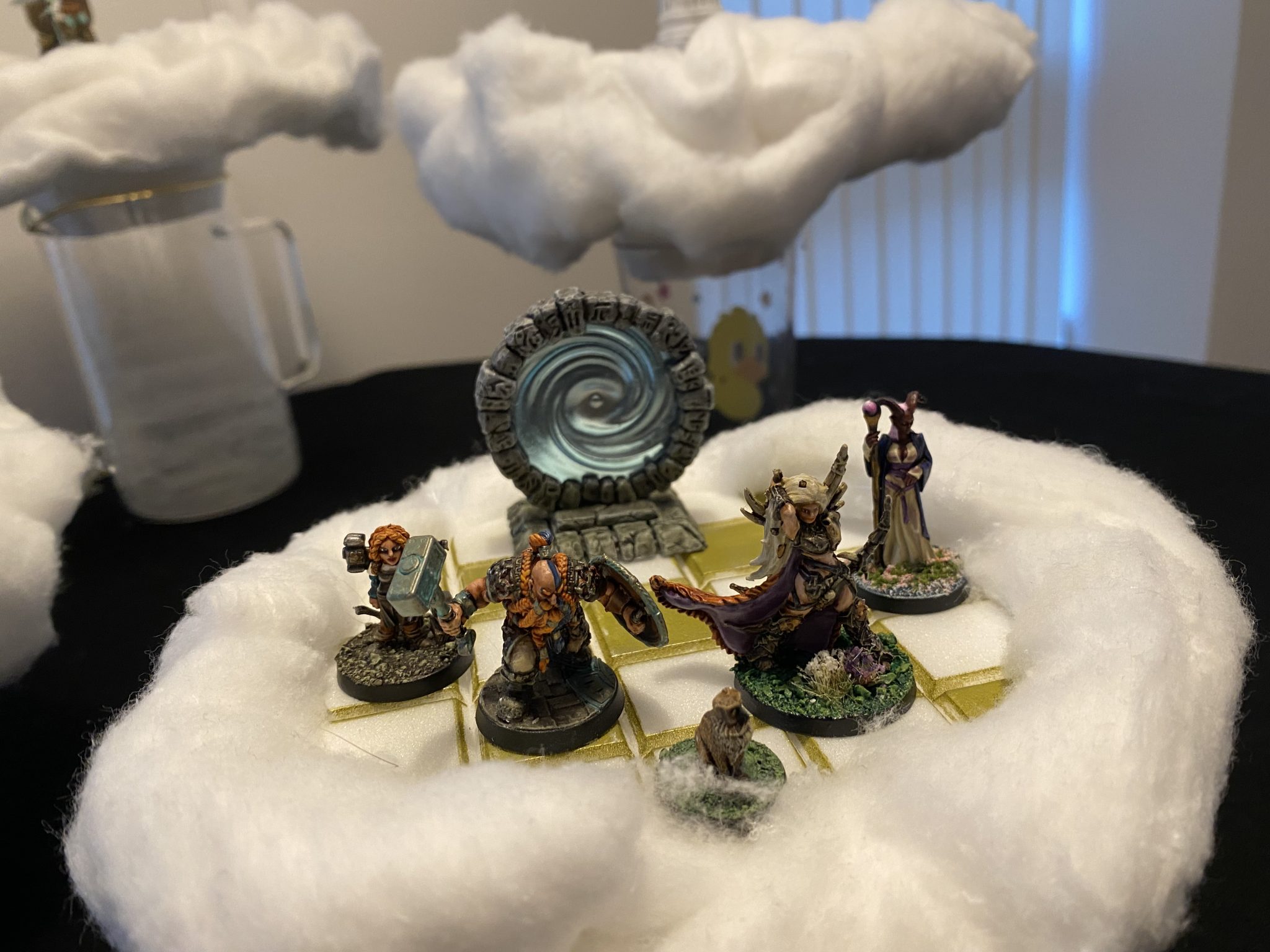 The party explained to the Angel they had been sent by his beloved Azrael to bring him to her in Phlegethos. 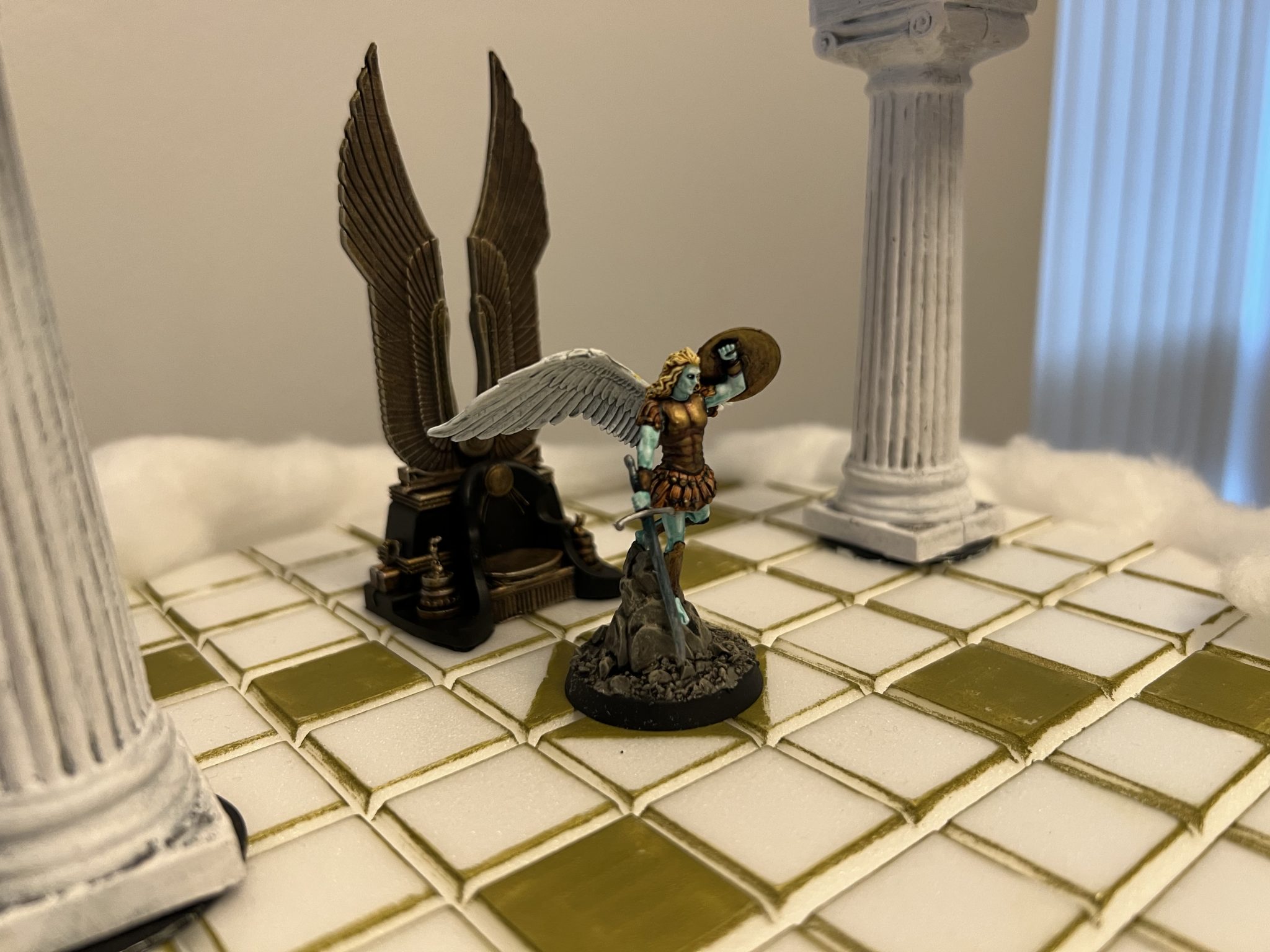 However, Archon looked shocked and it became clear that not only had he believed Azrael to be dead, he also had not intended to follow her to Phlegethos and had stayed behind on his own accord believing her to have gone mad as she stepped through the collapsing portal she her self had conjured centuries ago.

Rattled by the revelation, the party tried to explore options for Archon to both help regain the Soul Coin that contained 19% of our Tiefling Sorcerer Seipora’s soul as well as defeat the Demons attacking Dragonskeep.

Archon explained that Angels did not engage with the conflicts in the Material Realm and while he offered his sympathy, there was nothing more he could offer.

Suddenly Azrael started breaking through the portal with difficulty as Mount Celestia tried to repeal her approach. 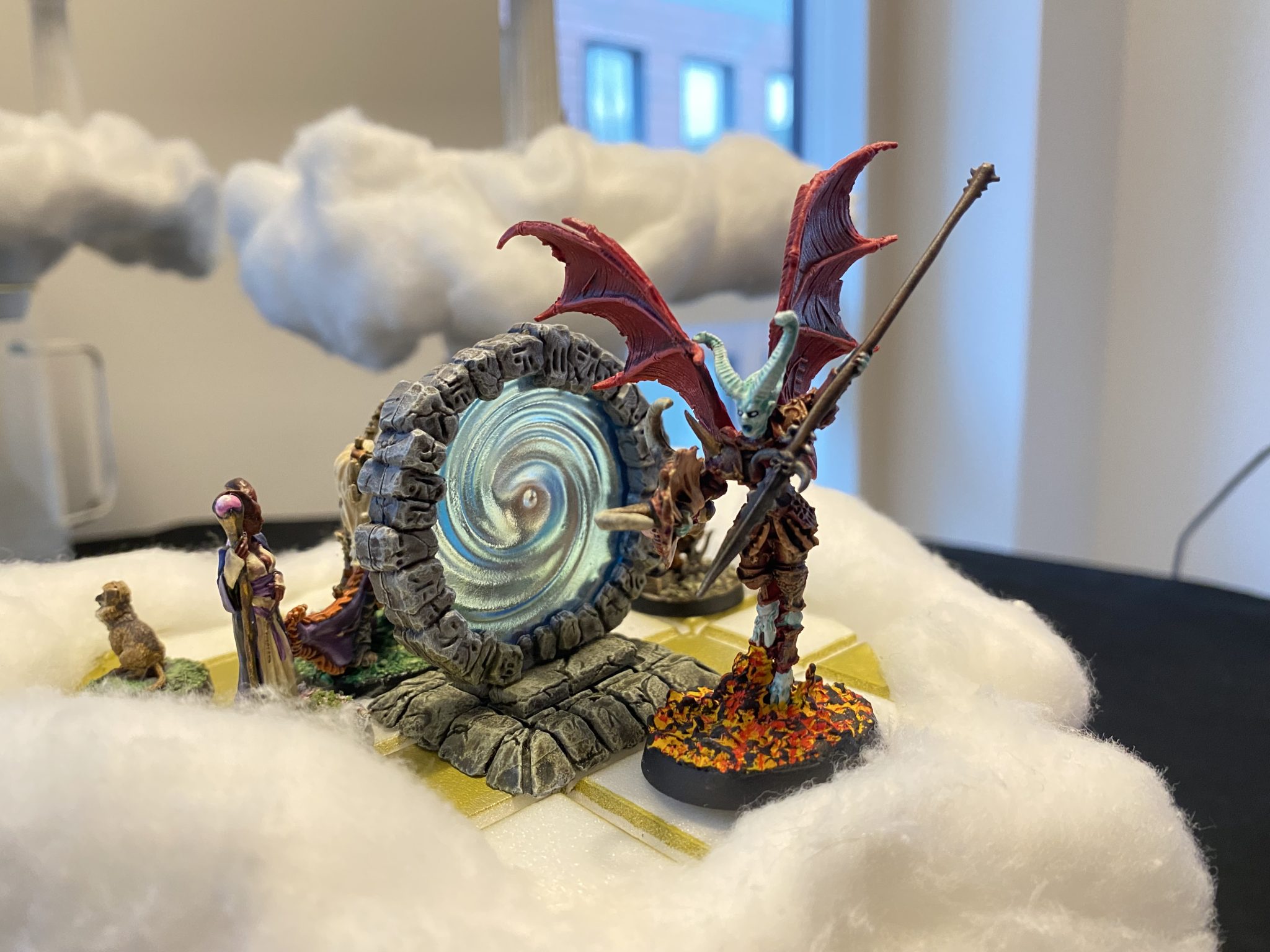 Stuck in the portal, yearning for her lover, she desperately cried out for Archon to help her, while two Kirin appeared as cautious guardians of the Celestia realm. 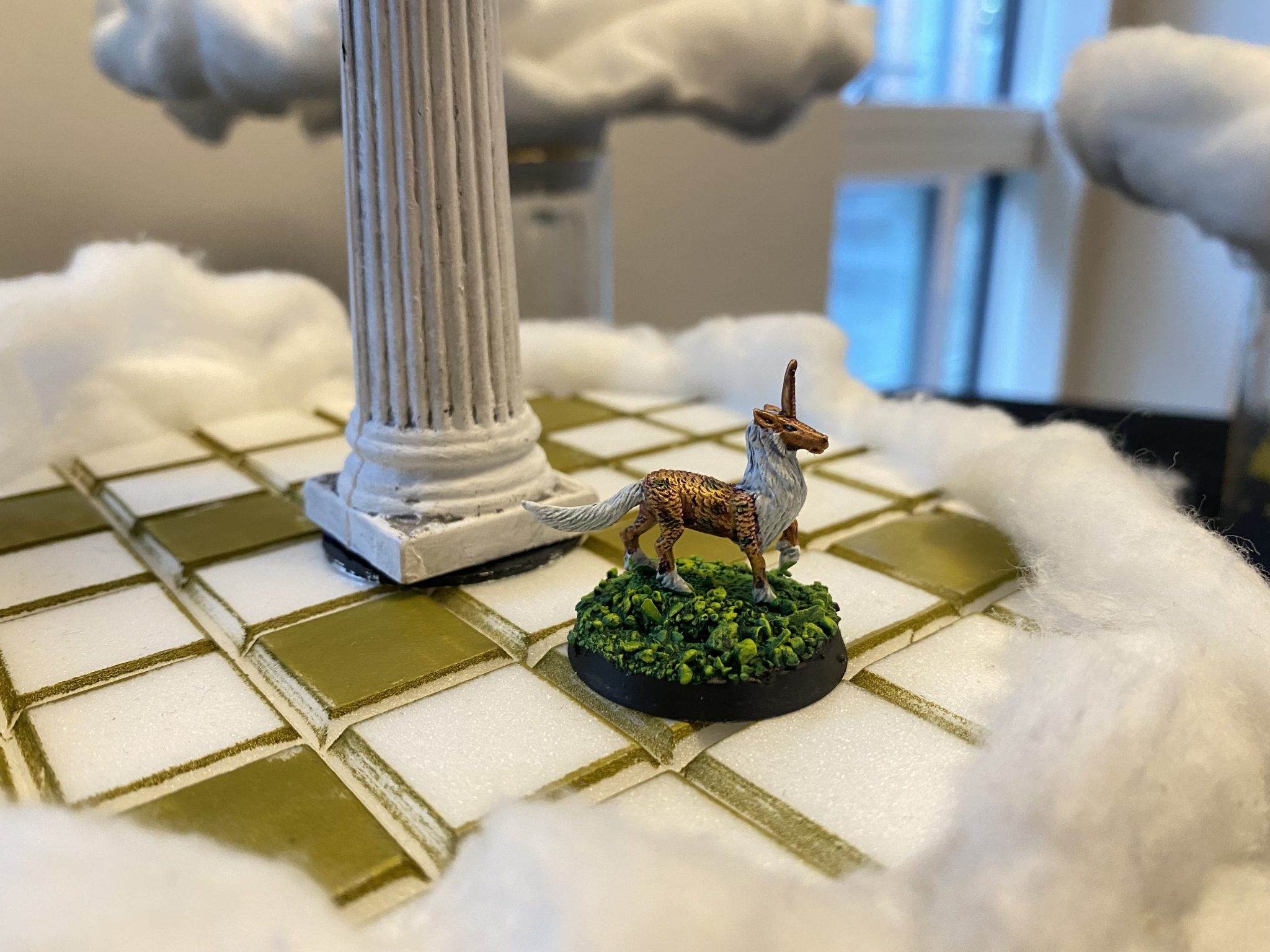 Archon, tears streaming down his perfect emerald skin, begged Azrael to return to hell. knowing she was lost forever, he still loved her and hoped for her life.

However, the party having used the opportunity to discuss the situation, decided to help Azrael. After all, she held both the Soul Coin and the promise of aid against the Demons.

Quickly, Thorga the Dwarven Paladin (who had stayed at the portal to keep an eye on it), grabbed Azrael’s hands and Misty Stepped to another cloud.

DM note, what a bold move! Earning Inspiration, but also a DC15 STR check, that I quickly decided that if it failed, the dwarf would be Misty Stepping but only with hands! Fortunately for Azrael, the roll was a success! 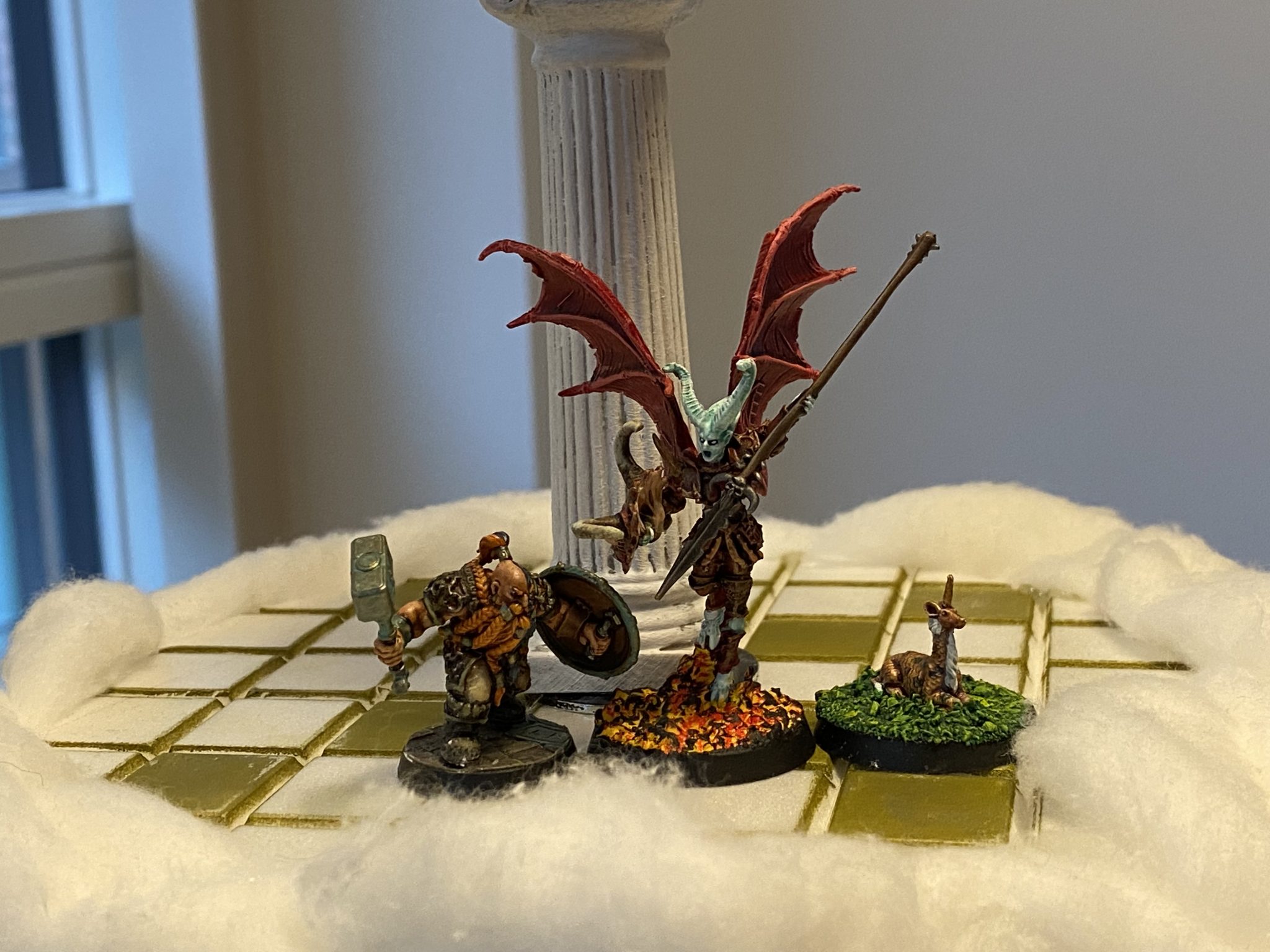 The battle of the lovers begins

With Azrael freed from the portal, tears of blood and anger streaming down her face, it was clear the party had chosen their side.

To help them in their aid, Azrael called forth a rainbow bridge that would allow the party to move between clouds, but without her full concentration the bridge moved randomly until Thorga reached into his bag of useful things and got a small whistle that allowed him to re-position the rainbow bridge. 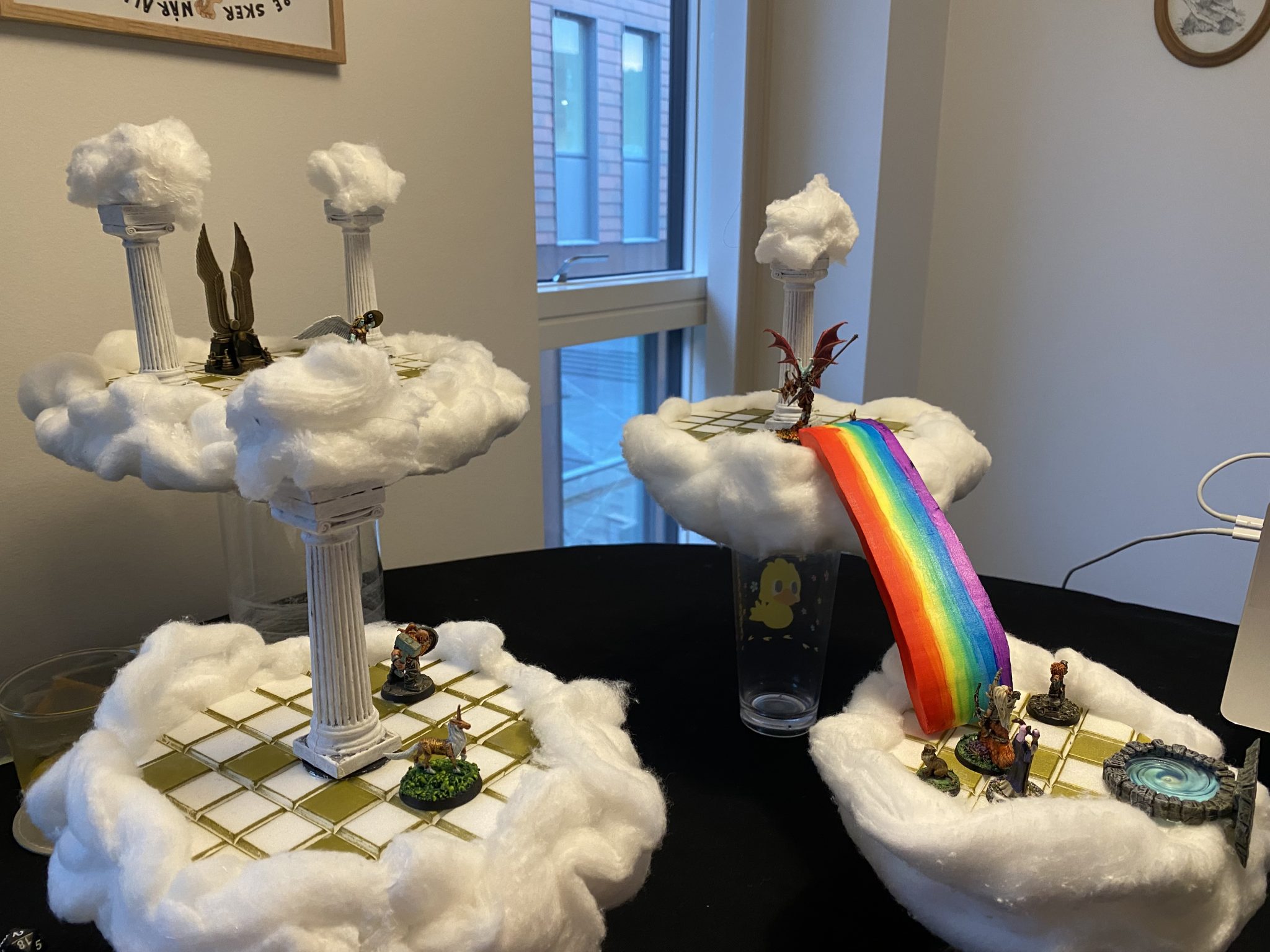 At the same time either Seipora or Kari muttered something needing counseling after the tragic love story’s true nature had been revealed.

And as called, James Brimstone appeared to offer his services. In the end his ability to heal the body as well as the soul became a more immediately needed help. 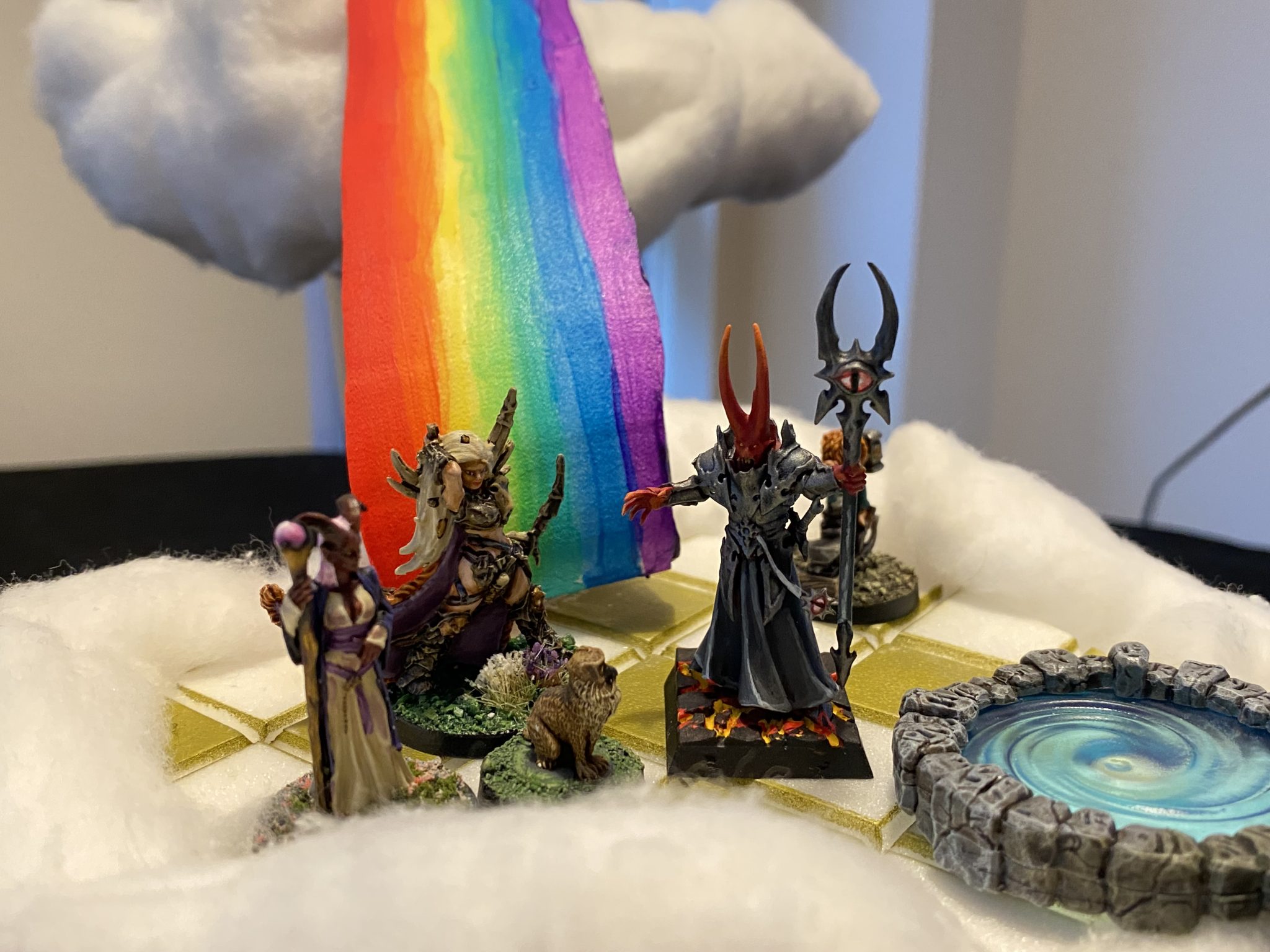 Seipora and Kari used the bridsge to move to Azrael to support her as Archon started swopping in for the attack having realised he could not allow his lover-turned-devil to remain. 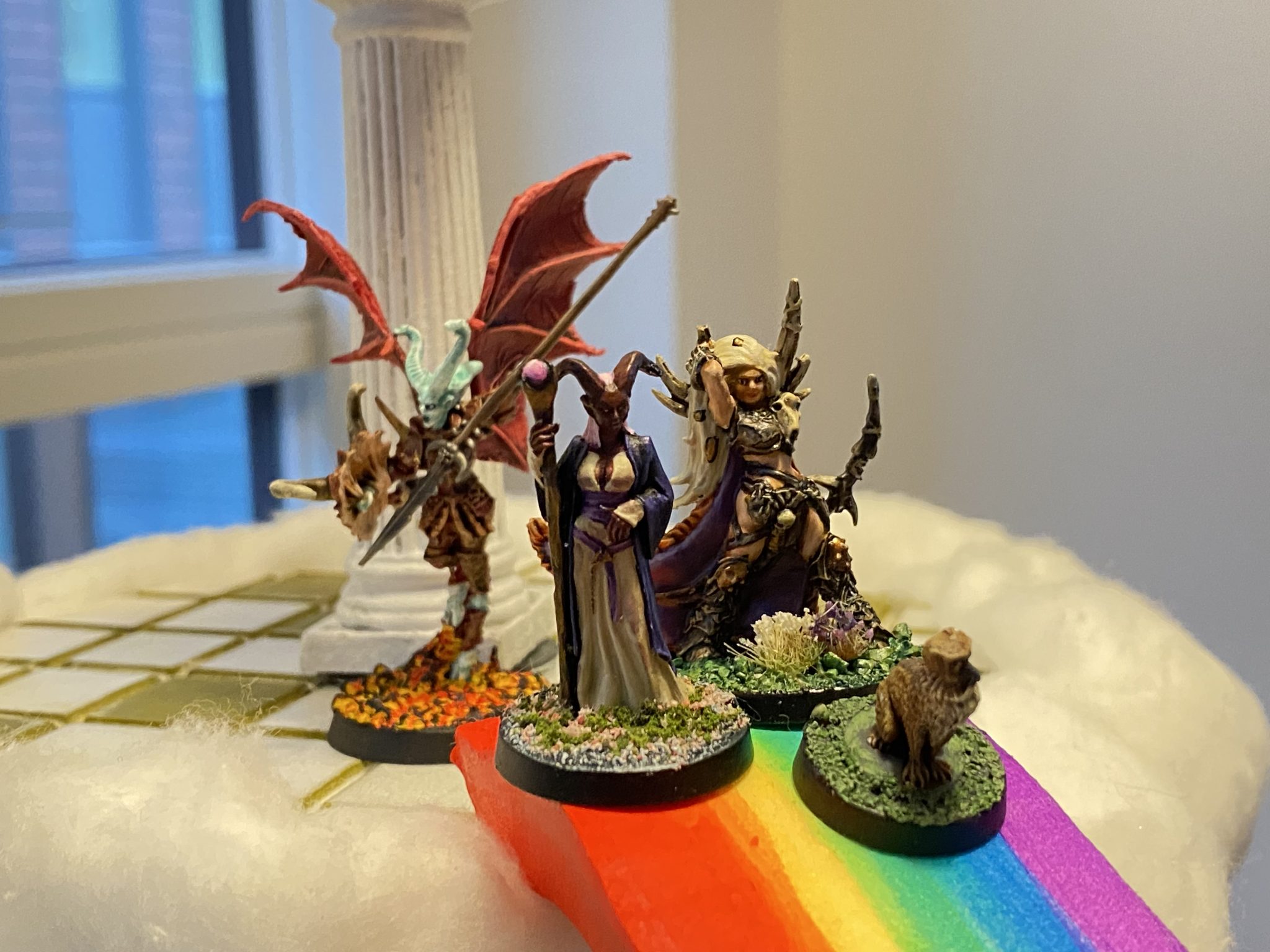 Archon tried to remove the heroes thinking them in danger, but as his good nature would not harm anybody not fully wicked, he scattered the party by dropping them on different clouds. 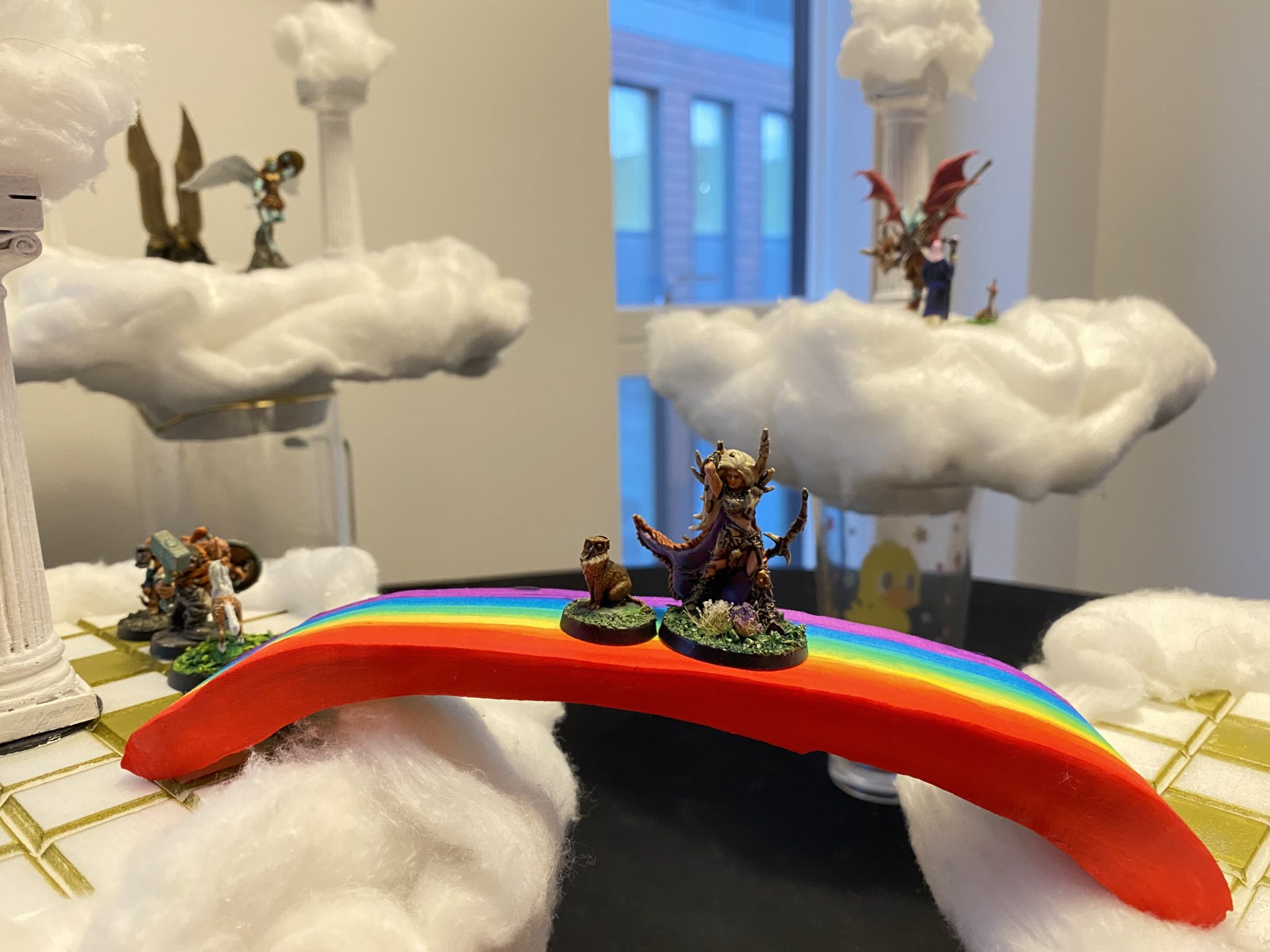 Once he had removed the heroes from immediate danger, he went in for the kill.

Pinned away from the battle, the heroes quickly regrouped to use the bridge to aid Azrael. 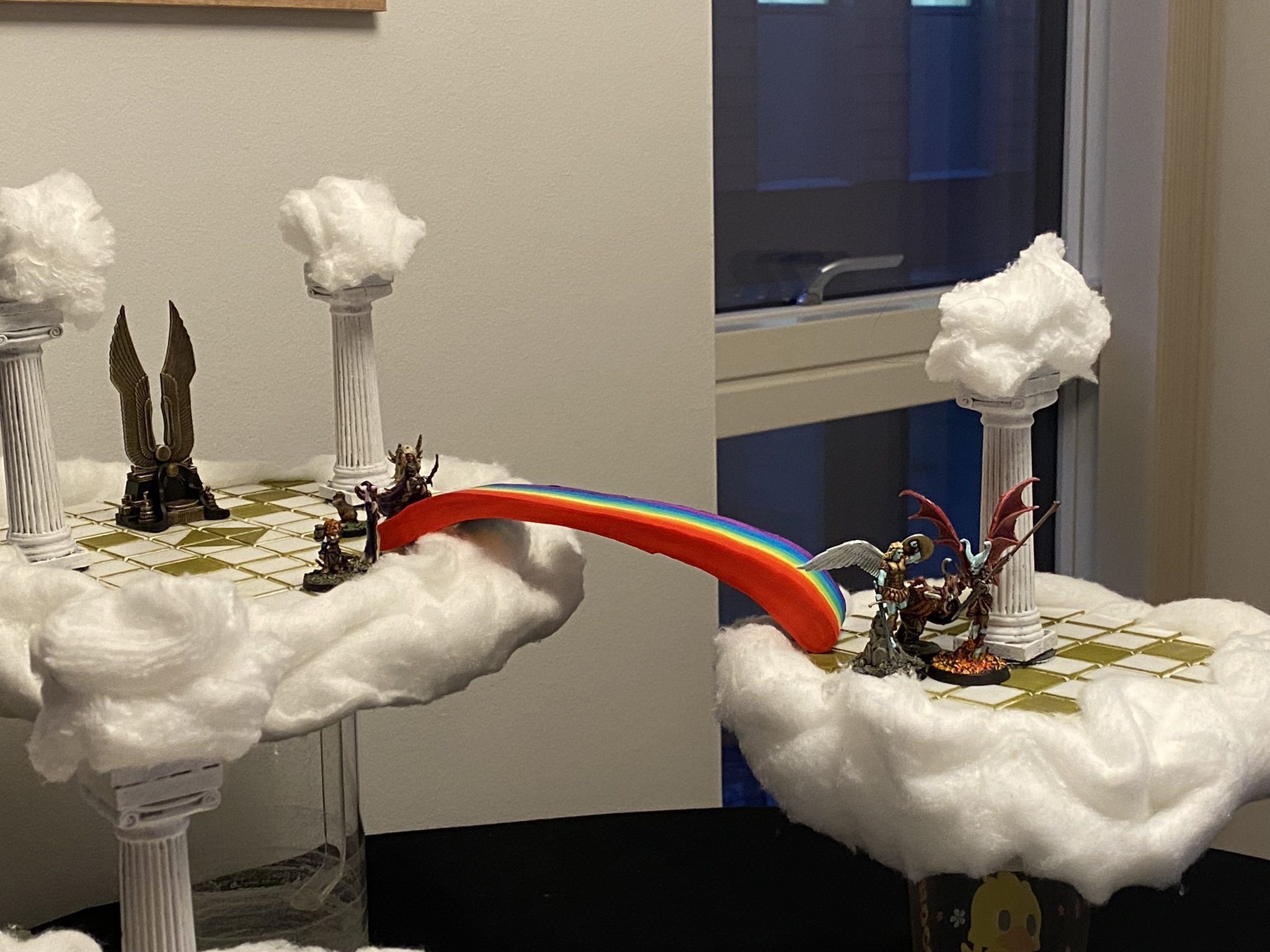 And thus Azrael, the Fallen Angel, murdered the love of her life, the Angel Archon with her three newfound friends.

The horizon darkened with Angelic shapes fast approaching to deal out judgment and vengeance.

The drained Angel Slayers, thought it best to retreat to Hell, but Azrael, distraught by the loss of her lover, would not move.

The party quickly decided to bring the body of Archon with them to make Azrael move and they returned safely to Phlegethos.

The heroes wasted no time and poured what they had left of healing potions down the throat of the limp angelic body.

Azrael jumped with hope in her blood teared eyes.

Archon violently regain his conscious, but realising where he was, he uttered “what have you done to me?” again and again, louder and louder, until the mutter became screams:

“WHAT HAVE YOU DONE TO ME?”

Screams merged with insane laughter echoing across the fiery wasteland of Phlegethos as Archon descended into the bliss of the deepest madness only immortal beings can ever reach. 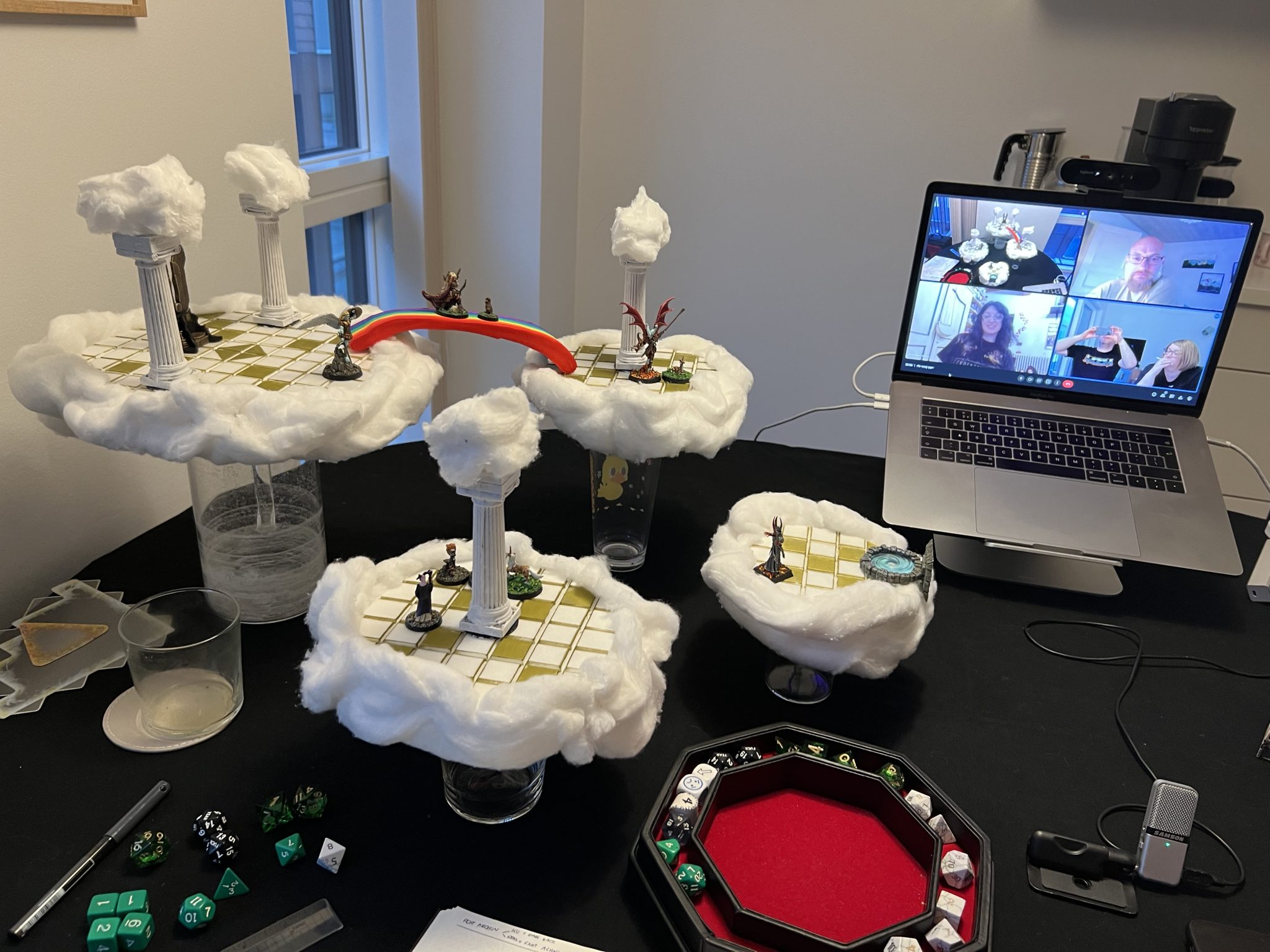