In our previous game, Our Warlock, Alynanys the half-elf, had suddenly been summoned away by her patron, the Pit Fiend general, Xinphalaxal The Angel Charmer. (Sean, her player, was Dungeon Master in last game).

However, Alyanys did not returned as planned so the rest of our heroes went through her stuff and found a letter addressed to them with a glass ring that when broken, would create a portal to where-ever Alyanys might be, so they could grab her and all jump back safely.

Hastily, the heroes opened the portal and found themselves in a large hot room, full of black smoke and a suffocating atmosphere, and with stream of lava running across the floor.

They had arrived in Avernus!

In the large room they found Alyanys collapsed in a cage made of scorching hot metal. Seeing their suffering companion, the party yelled out at the half-elf forgetting their normally cool composure.

Unfortunately, it alerted two infernal dwarf guards, who immediately intervened to kill of the intruders.

Ultimately the heroes where victorious, but struggled to free Alyanys from the burning hot cage.

In the end, she regained her composure and wits, and used her Chill Touch spell to use its grave-like coolness to freeze the cage and, with an exhausted kick, break the now brittle bars.

By now the heroes had noticed a second cage holding a cabinet from which enraged demands of being let free, came.

Having unlocked the cage, the cabinet transformed into a wild angry Demon bent on revenge on its captors, the devils. However, the heroes decided to try and prevent the Demon from enacting its revenge and it turned against them.

Damon, the senior Paladin, cast “Hold Person” to hold the creature in place while the party fled out of the prison into the the prison entrance. 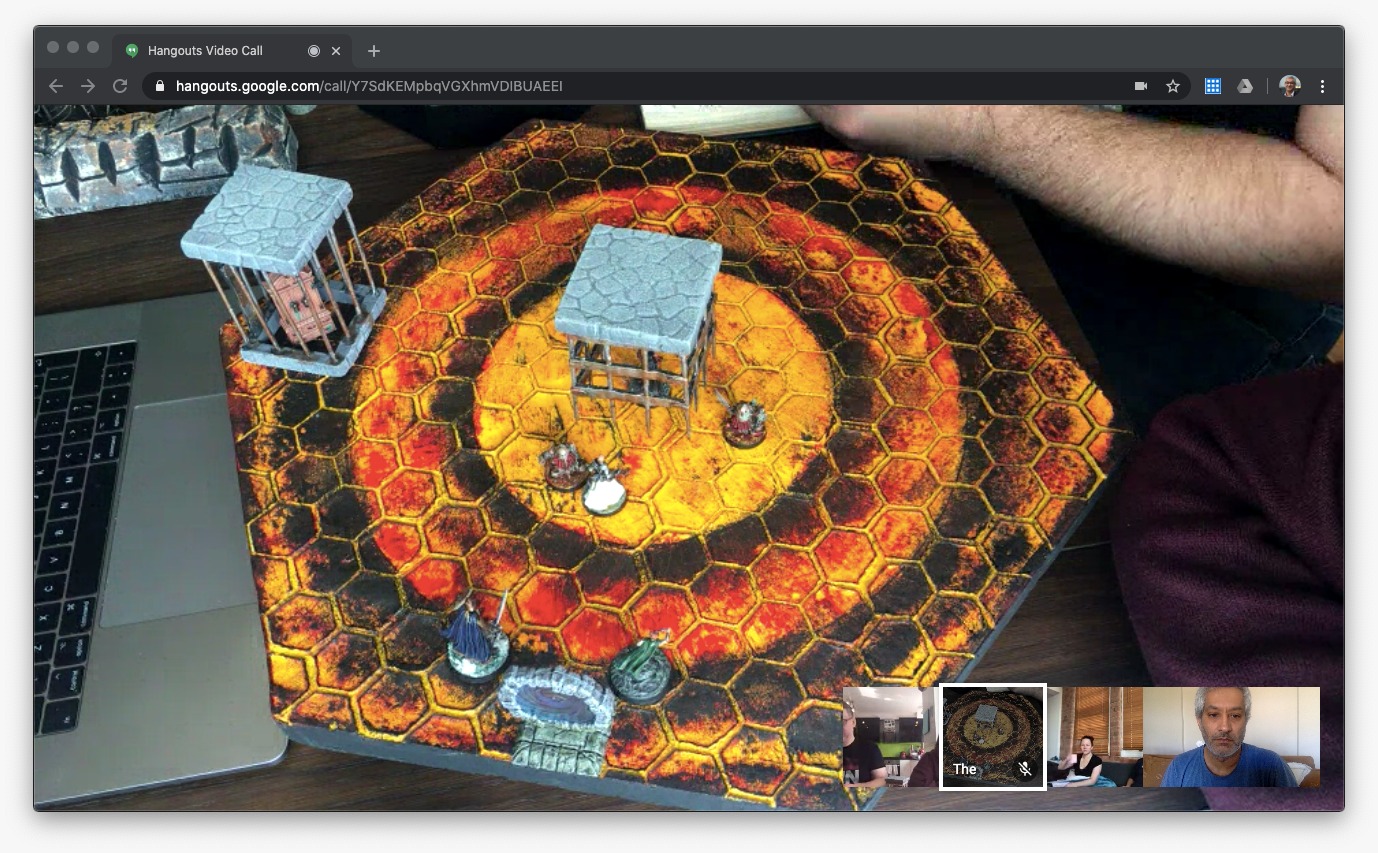 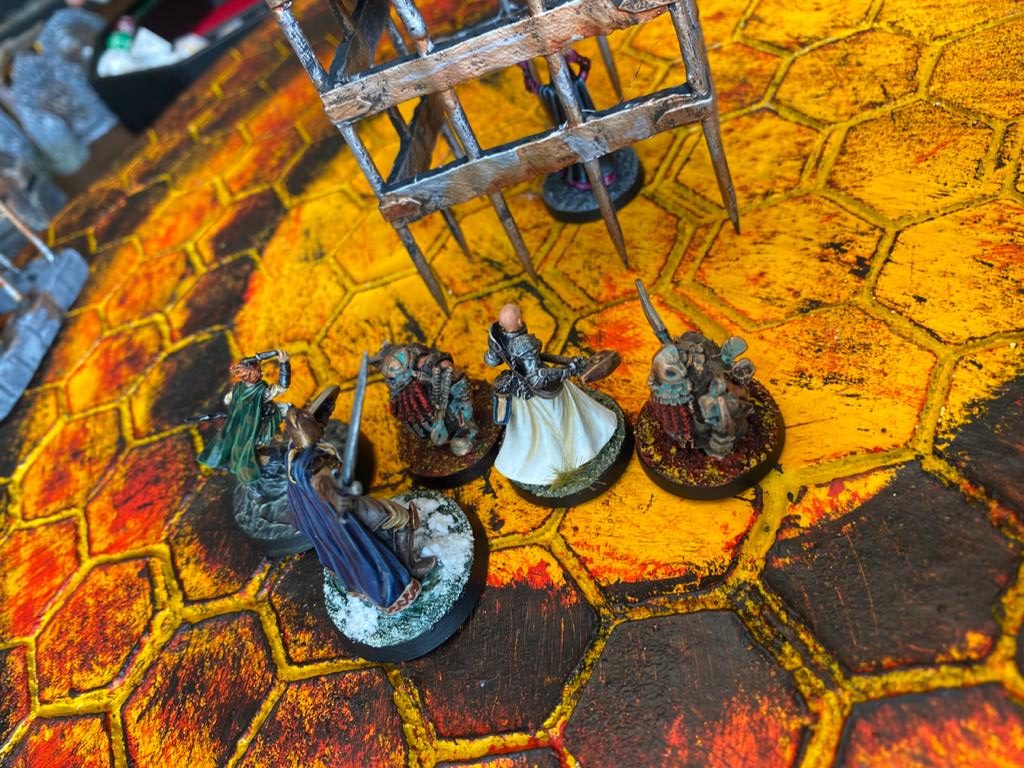 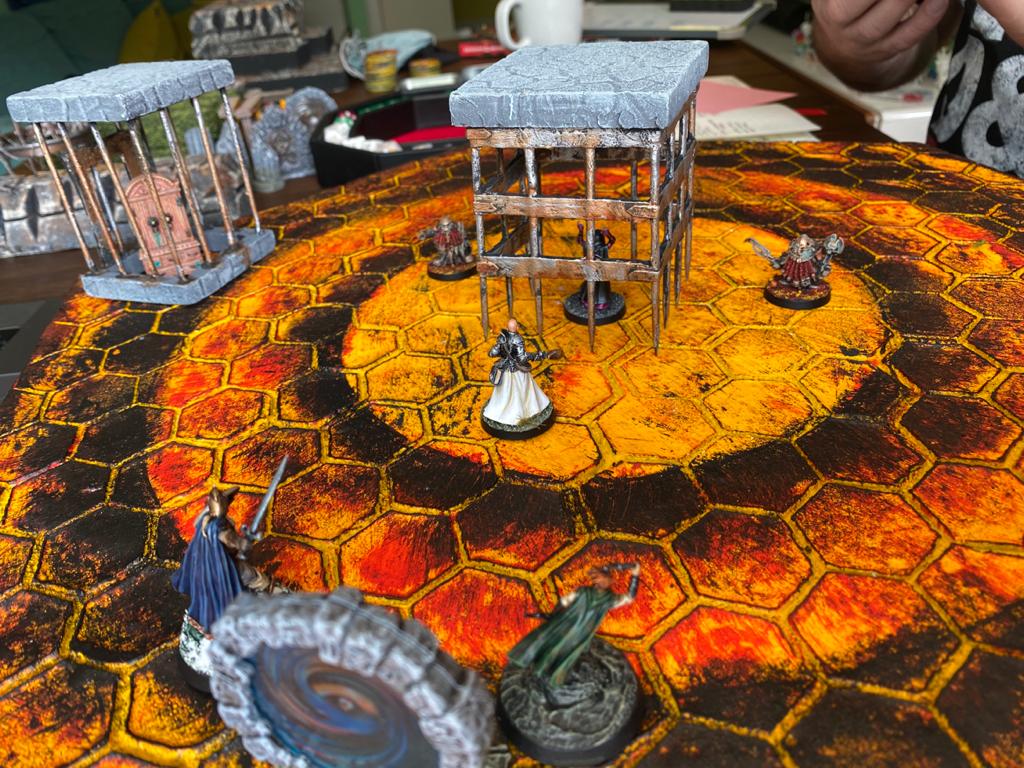 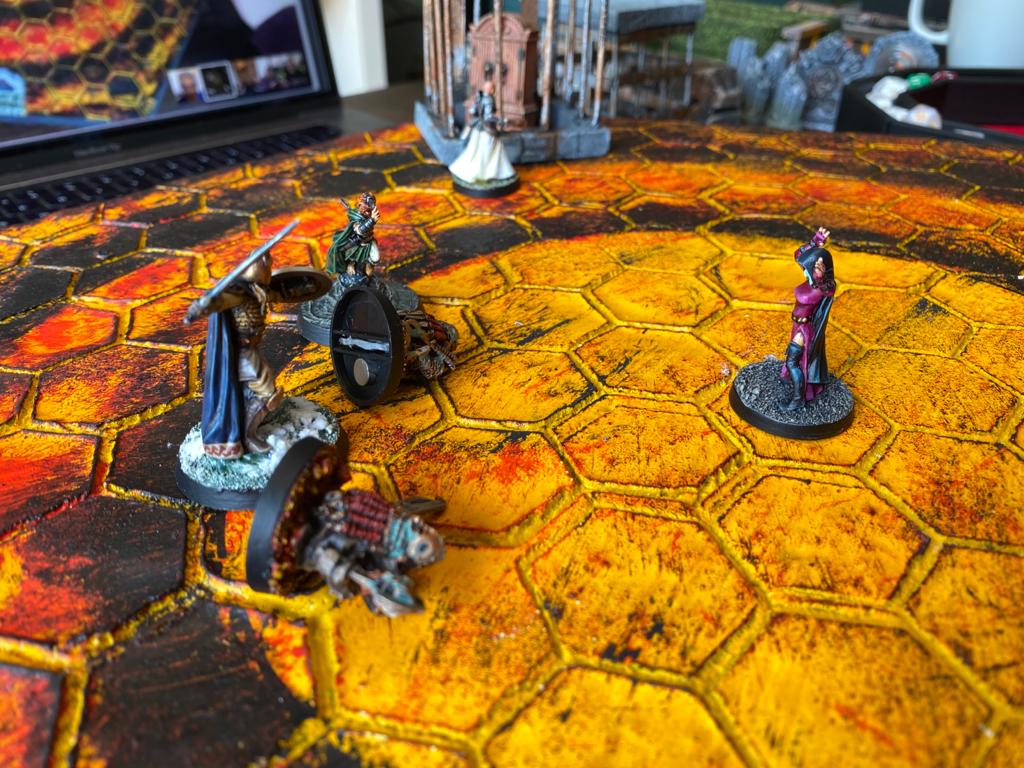 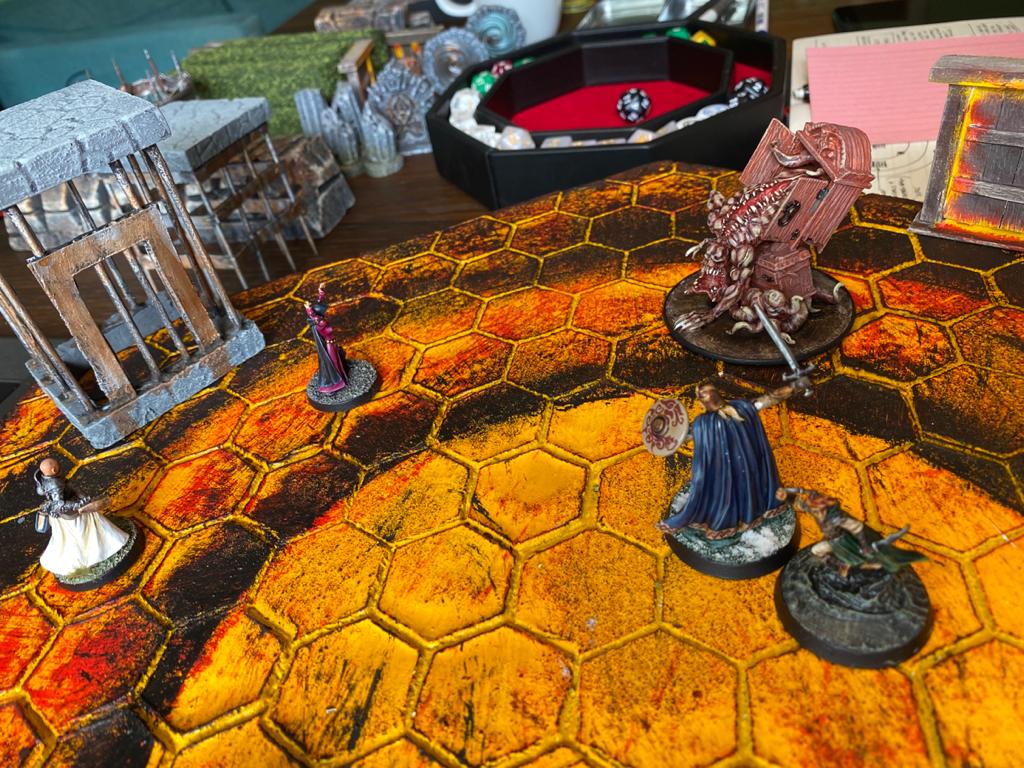 I don’t tend to use source books, but the “Decent Into Avernus” book looked interesting so I bought it and used the Demon Zapper and the Bone Brambles ideas.

Out in the Prison entrance, the party found a cage hanging low from the ceiling with a Unicorn, who our heroes immediately set out to free.

They had just freed the Unicorn, when the enraged Demon came crashing through, but the Unicorn “zapped” the Demon. It had effectively been a protective measure against any demons who would try and enter the prison.

Demon killed, the Unicorn disappeared back to its original realm leaving only a 5 inches wide disc, that the heroes ultimately ignored as they proceeded out of the prison. 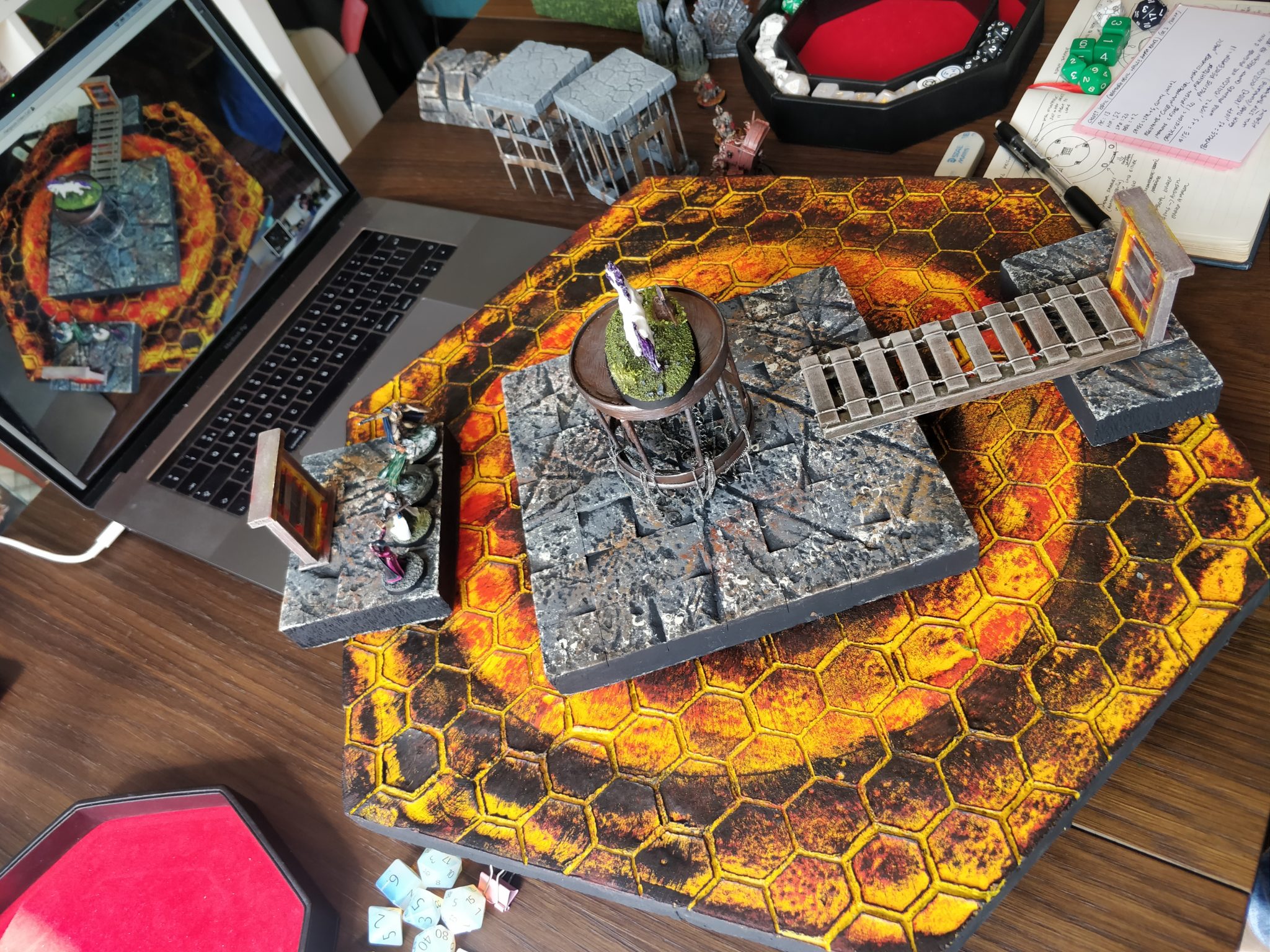 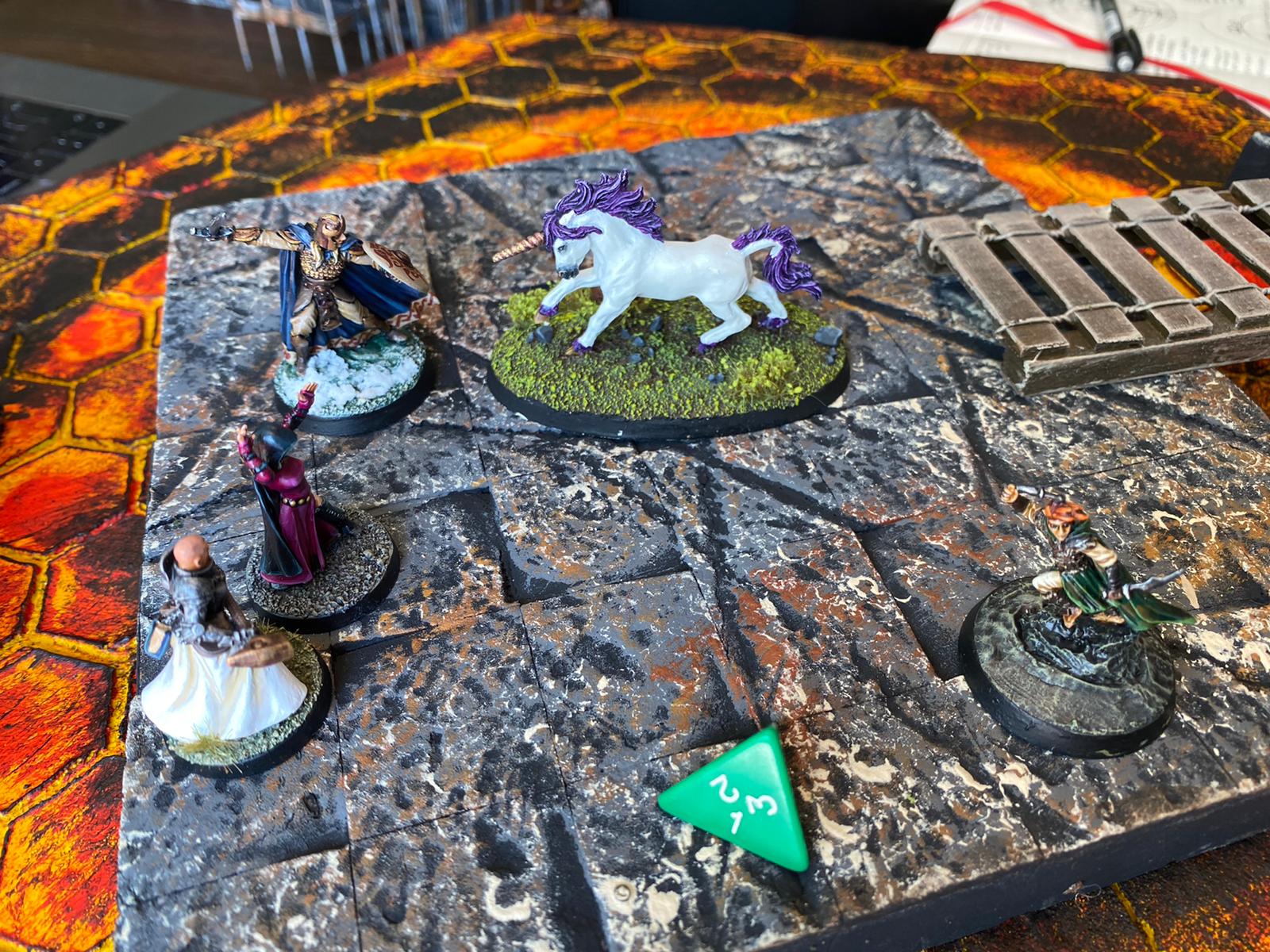 The Blood Wars from afar – What a view

The heroes emerged outside the prison on a broad ledge / road on a mountain side and it was here they saw the full landscape view of Avernus and the raging Blood Wars below in its full, terrible glory.

To the right the could see the edge and entrance into a creepy forest with branches looking like bones. And in front of the entrance there was a simple wooden shack with a big sign saying “Tickets”.

The heroes already drain from their short visit in Avernus, decided to head for the exit, but in a last minute decision, Damon decided to talk to the Night Hag managing the ticket booth.

It turned out the Bone Brambles was the only forest in Avernus and as such, a tourist attraction. Damon was talking to the Night Hag, Welby, our Halfling Rogue, tried to pick pocket the Hag, but was caught and the Hag attacked!

Fortunately, our Junior Paladin, Brand, calmed the situation down and the Hag, offended, closed the booth and left.

This left the party to continue towards the exit, which turned out to be a tunnel heading down. Walking straight into the tunnel, they triggered the floor mechanism to tip and they slid down into a lava oubliette with a terrible Soul Screamer Cannon firing mercilessly at them.

through some hard struggles and jumping between pillars emerging (and disappearing) and moving a ladder in position, the party finally made it to the Cannon and smashed it, but not before Alyanys was downed.

As the Cannon was smashed, Xinphalaxal appeared, taunting the heroes about Alyanys being out of reach for them to save. 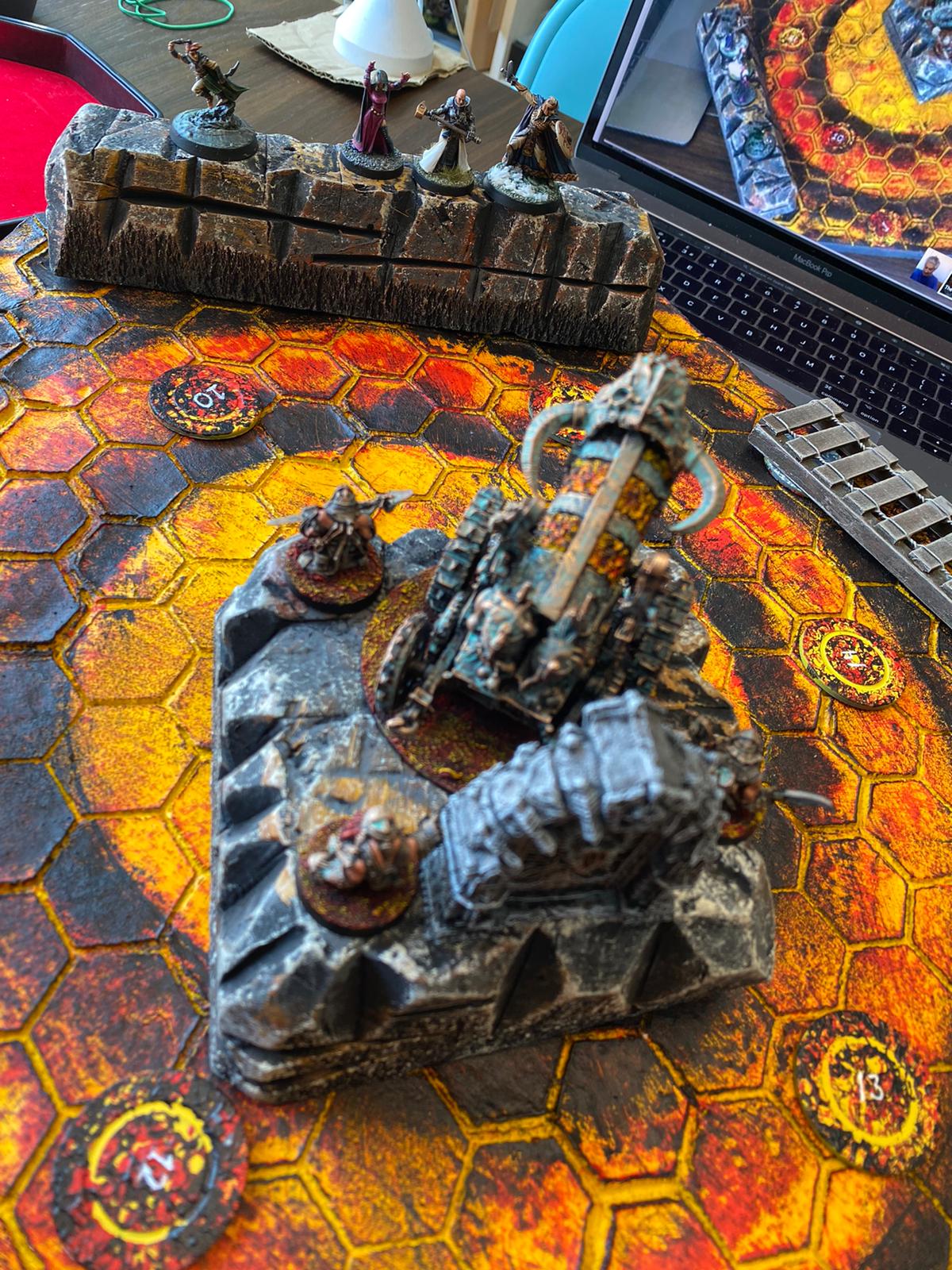 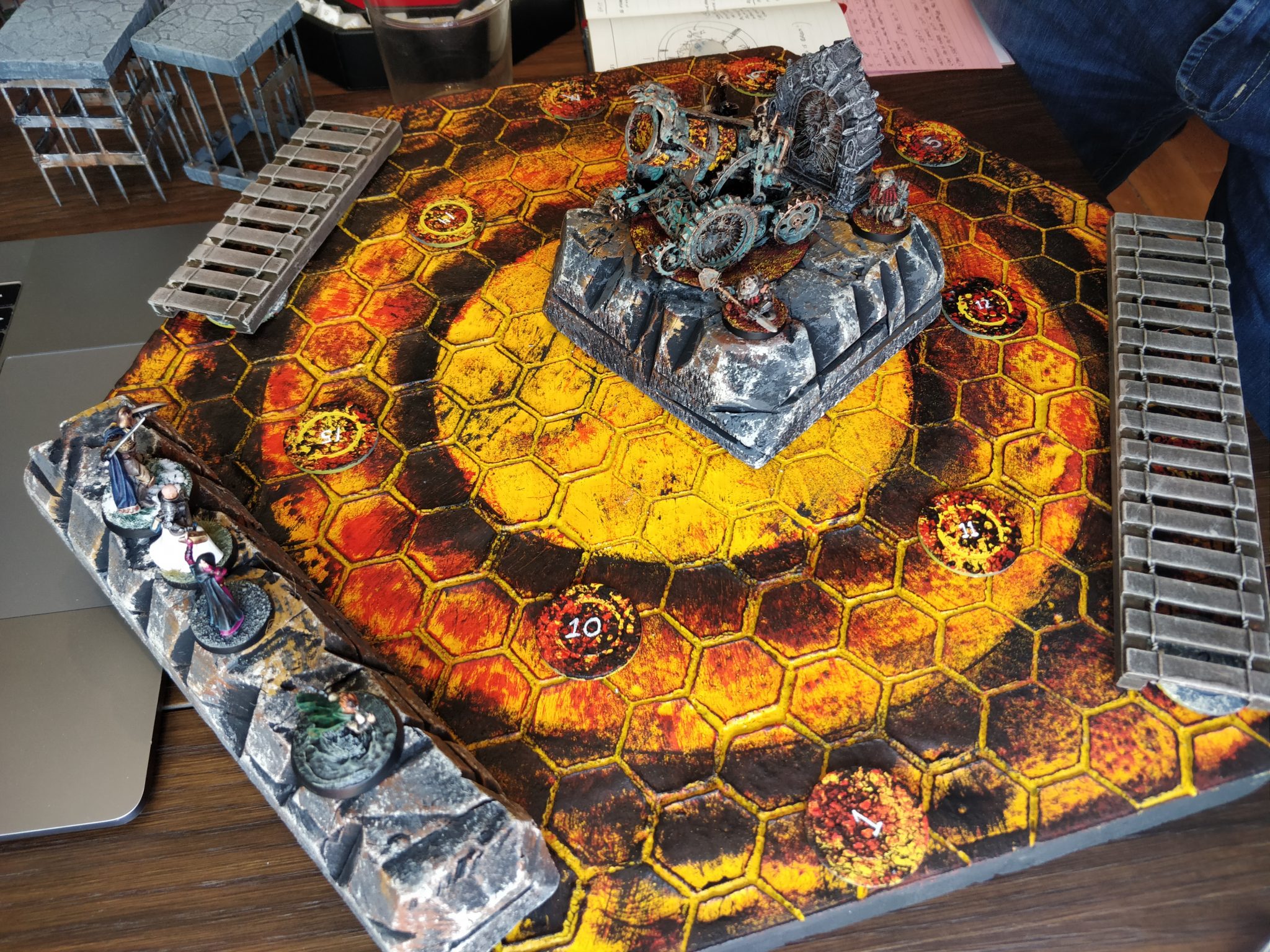 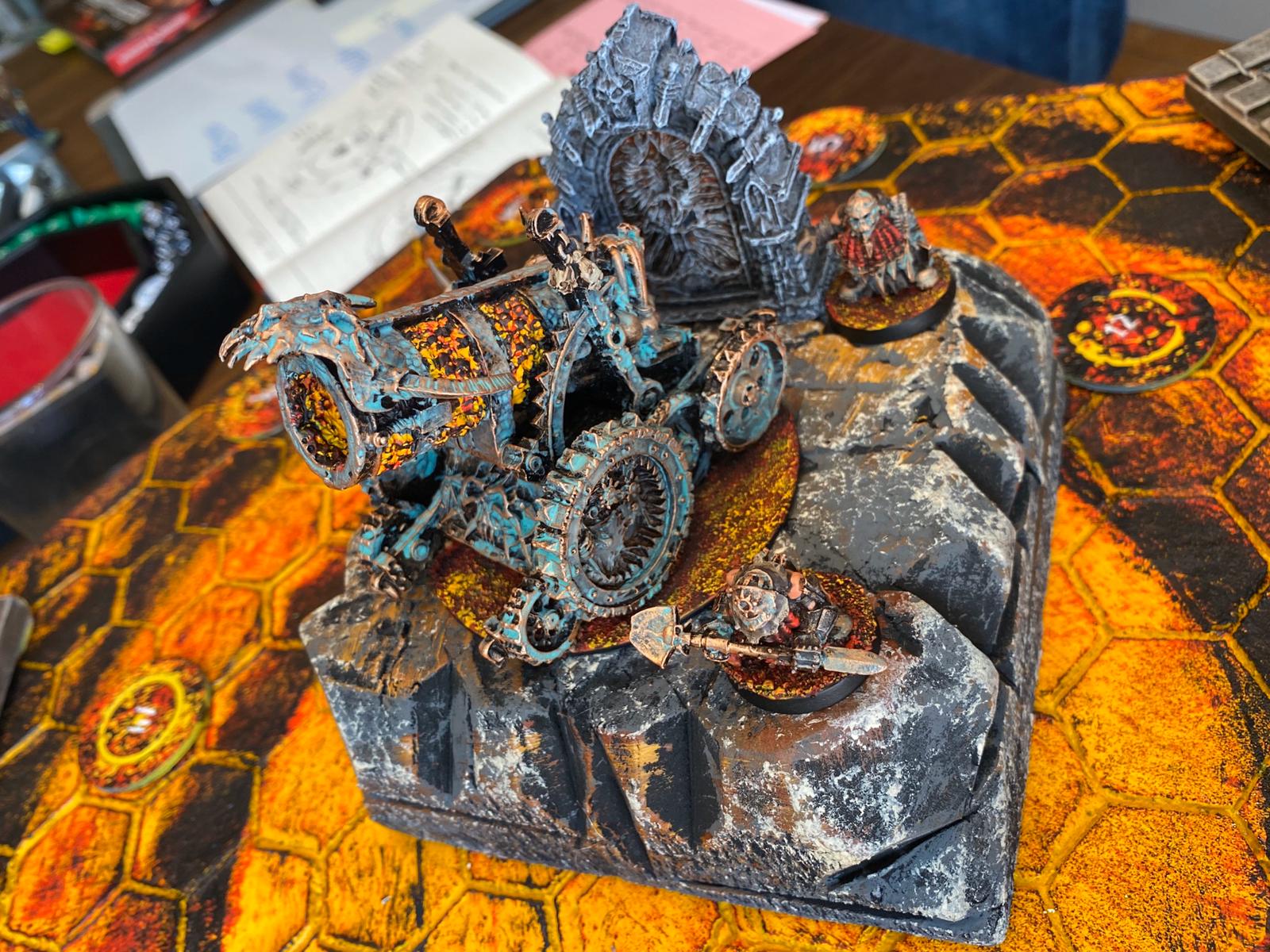 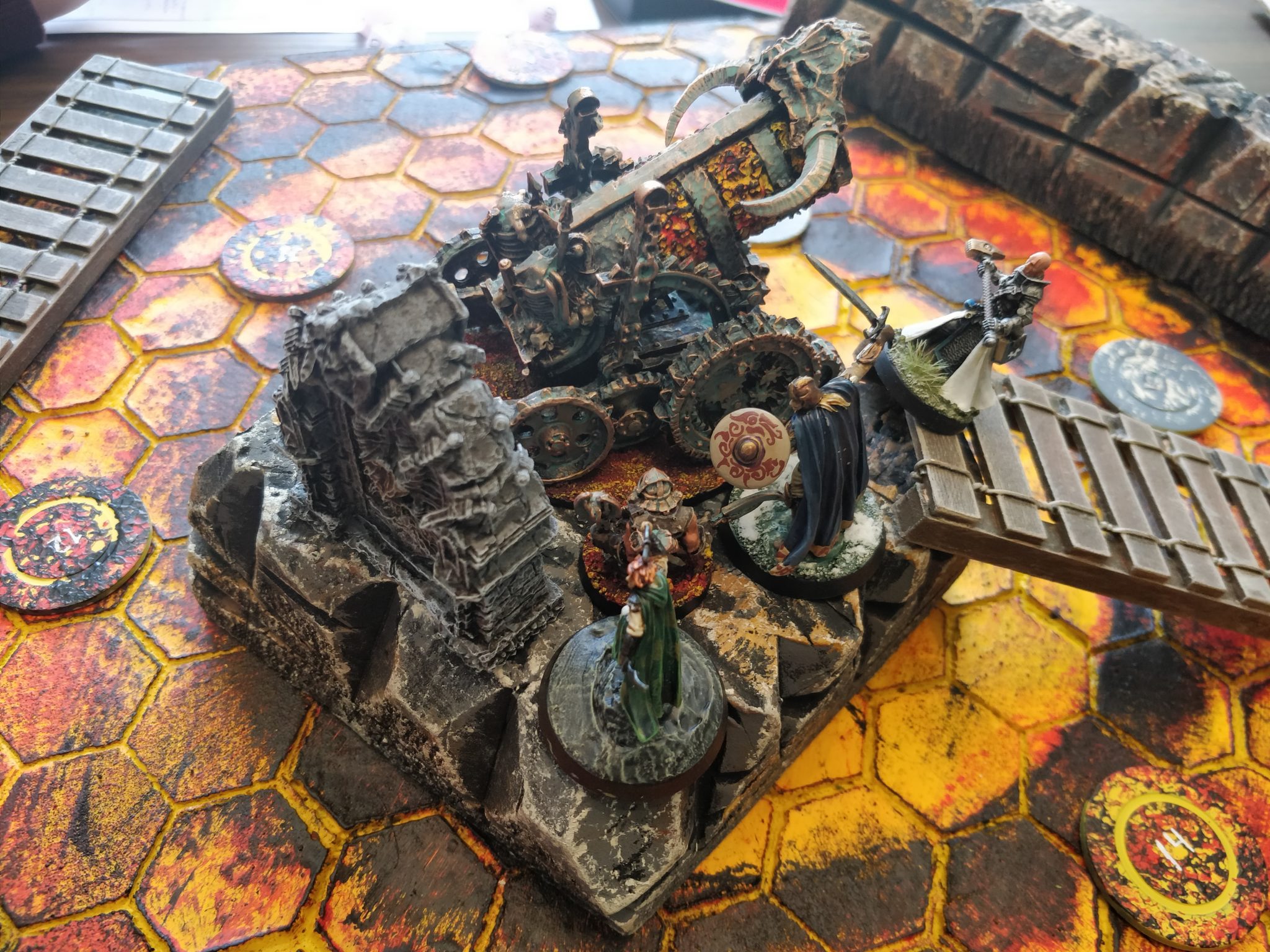 Playing Cards with the Devil

He offered them to help as long as somebody would sign an IOU contract with him.

In a desperate attempt to get out of the situation without signing a contract with the Fiend, Brand, the Junior Paladin challenged the Pit Fiend to a game of cards, which the Xinphalaxal arrogantly agreed to.

DM note: I used a simple dice game for this. Tony, the Paladin player, was given the a D6 to roll. He could choose to keep rolling the die and add the numbers BUT if he rolled 1, he would lose. In the end he rolled 4 times with a total 21.

The Pit Fiend would then roll to beat the number, but being a better gambler would roll with D10s… I rolled a 1 on the first roll!

But ultimately, pride cometh before a fall, and Brand beat the Field in cards! 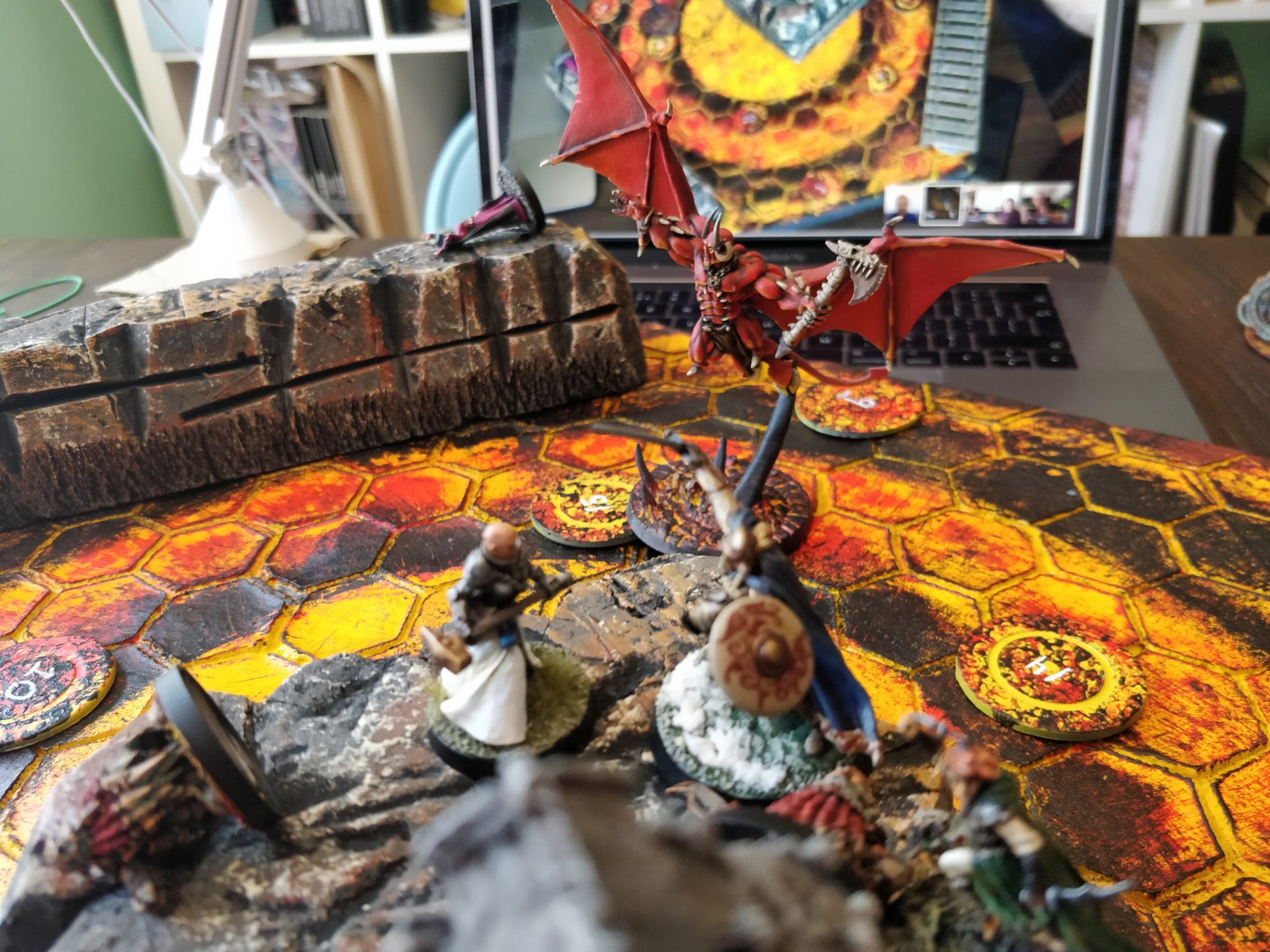 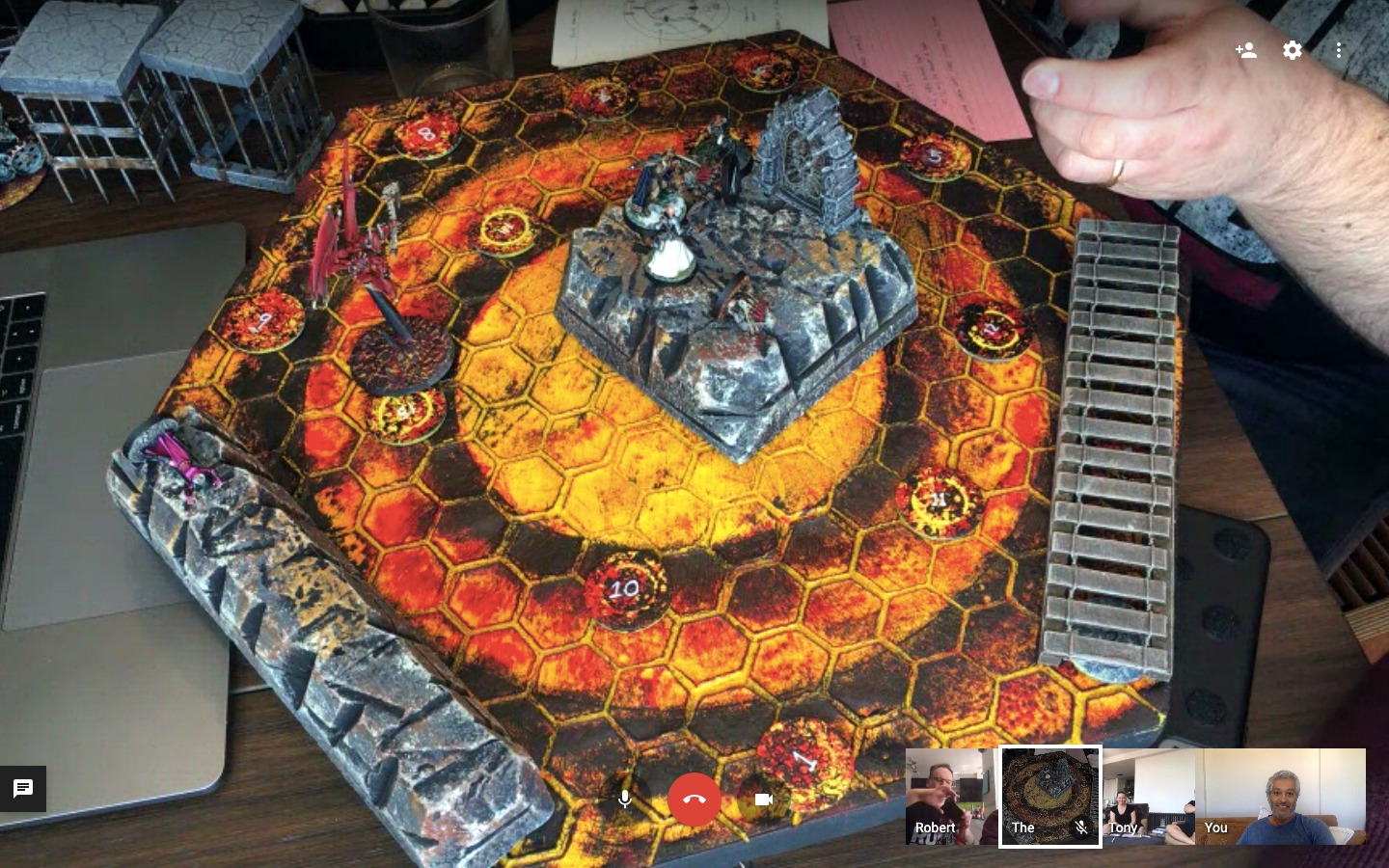 As the screams of the infuriated Pit Fiend faded away, the heroes found themselves back in the Daisygate in the Material Realm.

Me in my new t-shirt and one of my player’s sofa setup (Like it!) 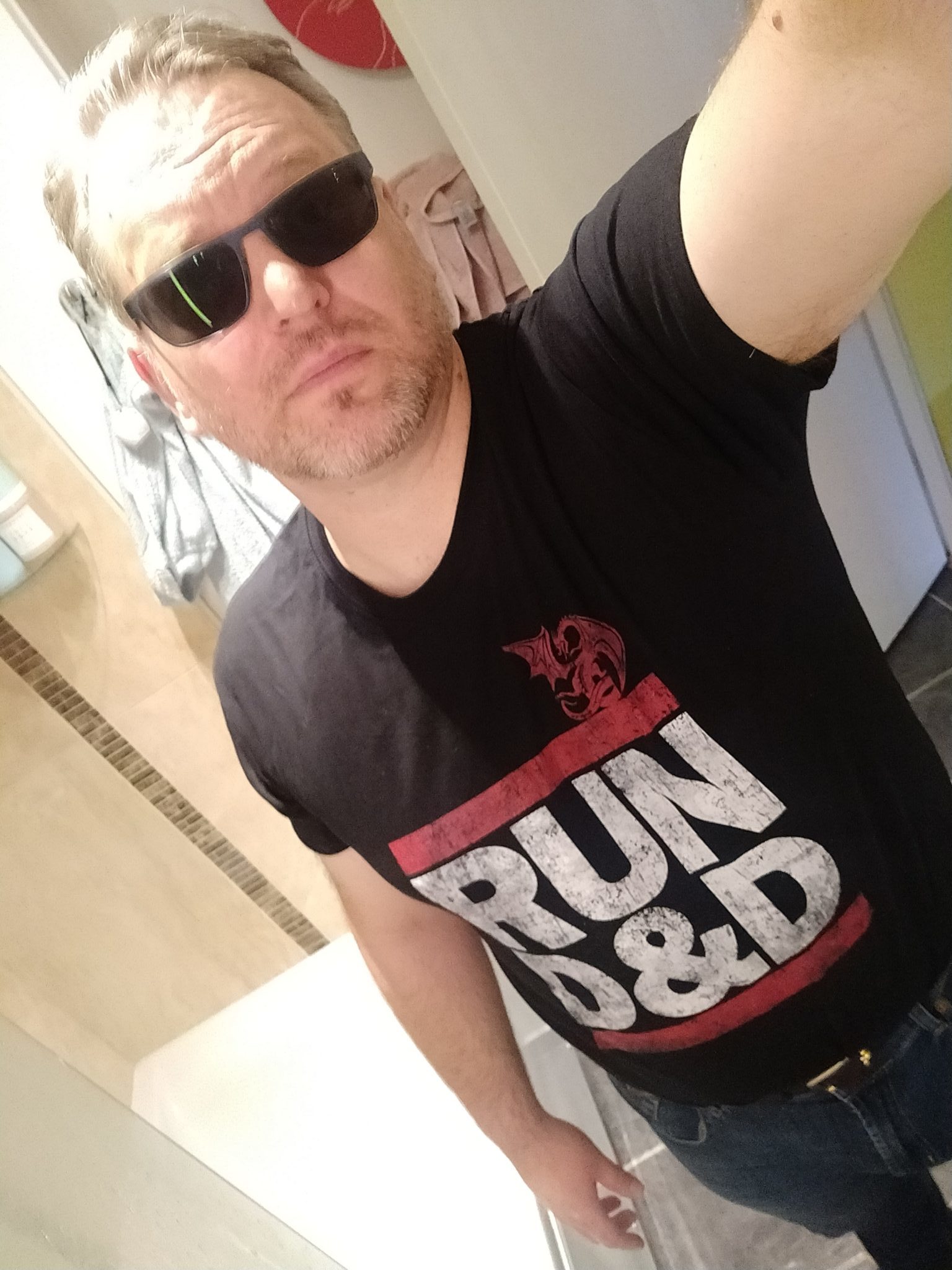 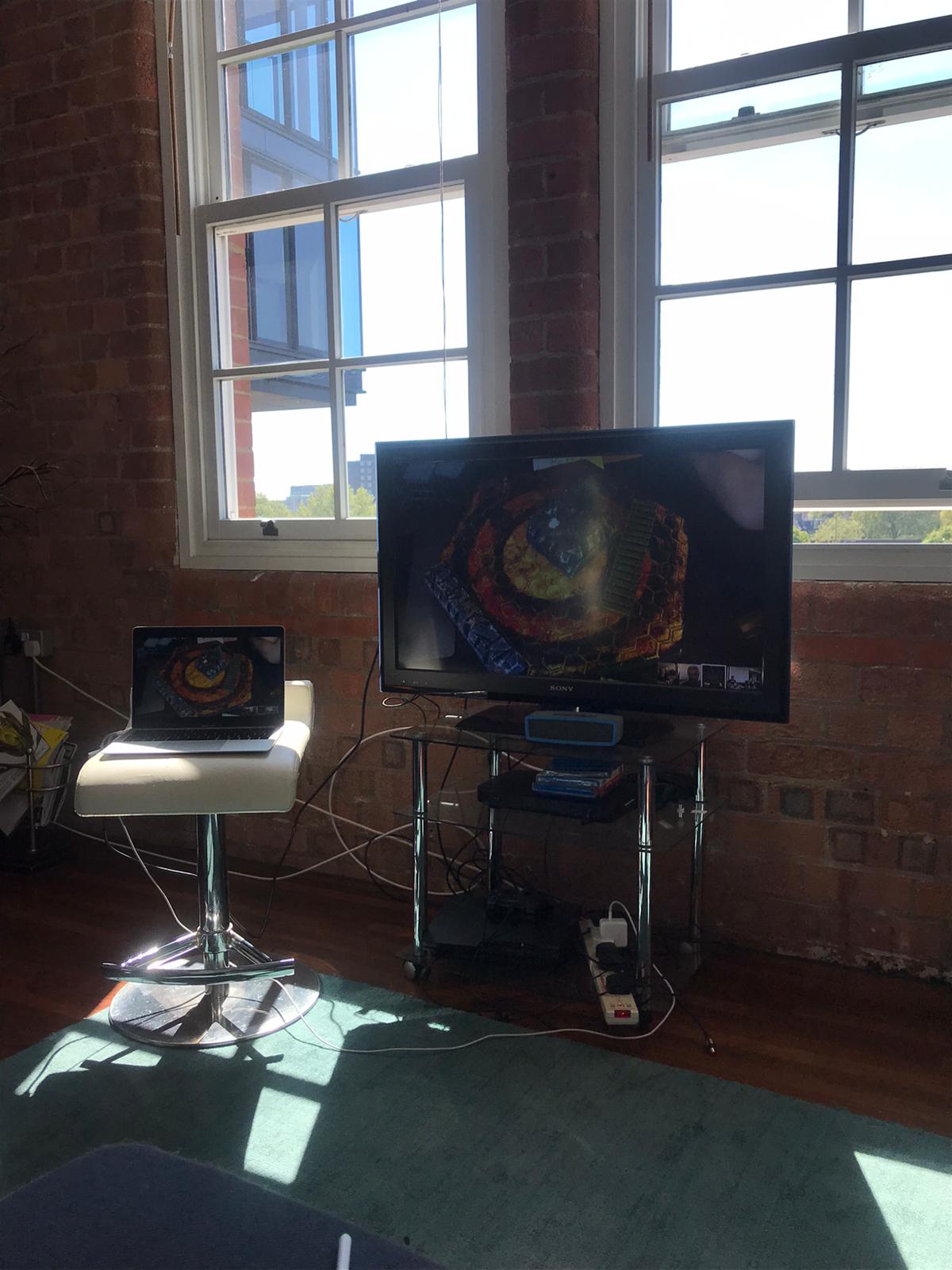 Scenery scatter for this game and my setup 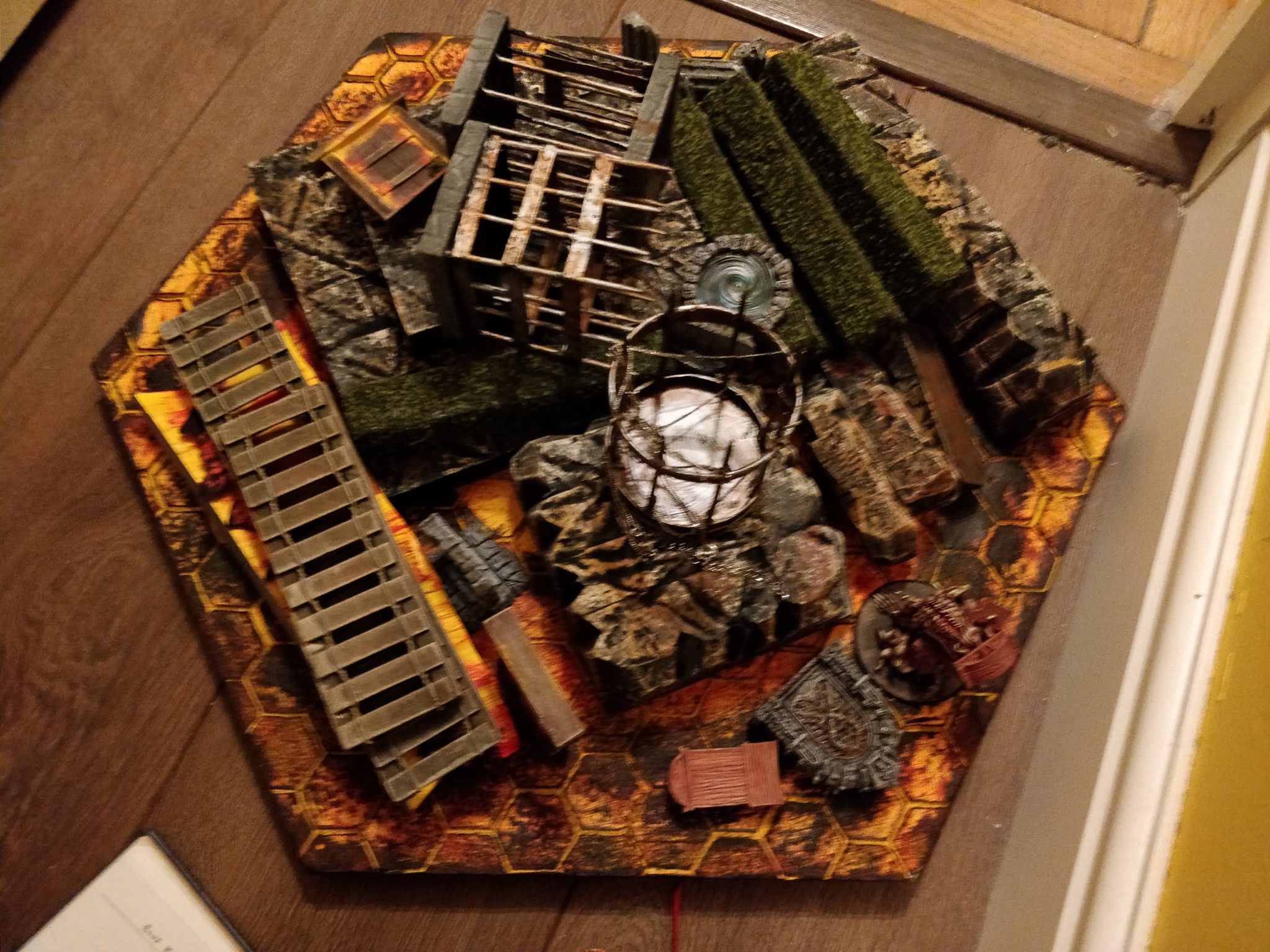 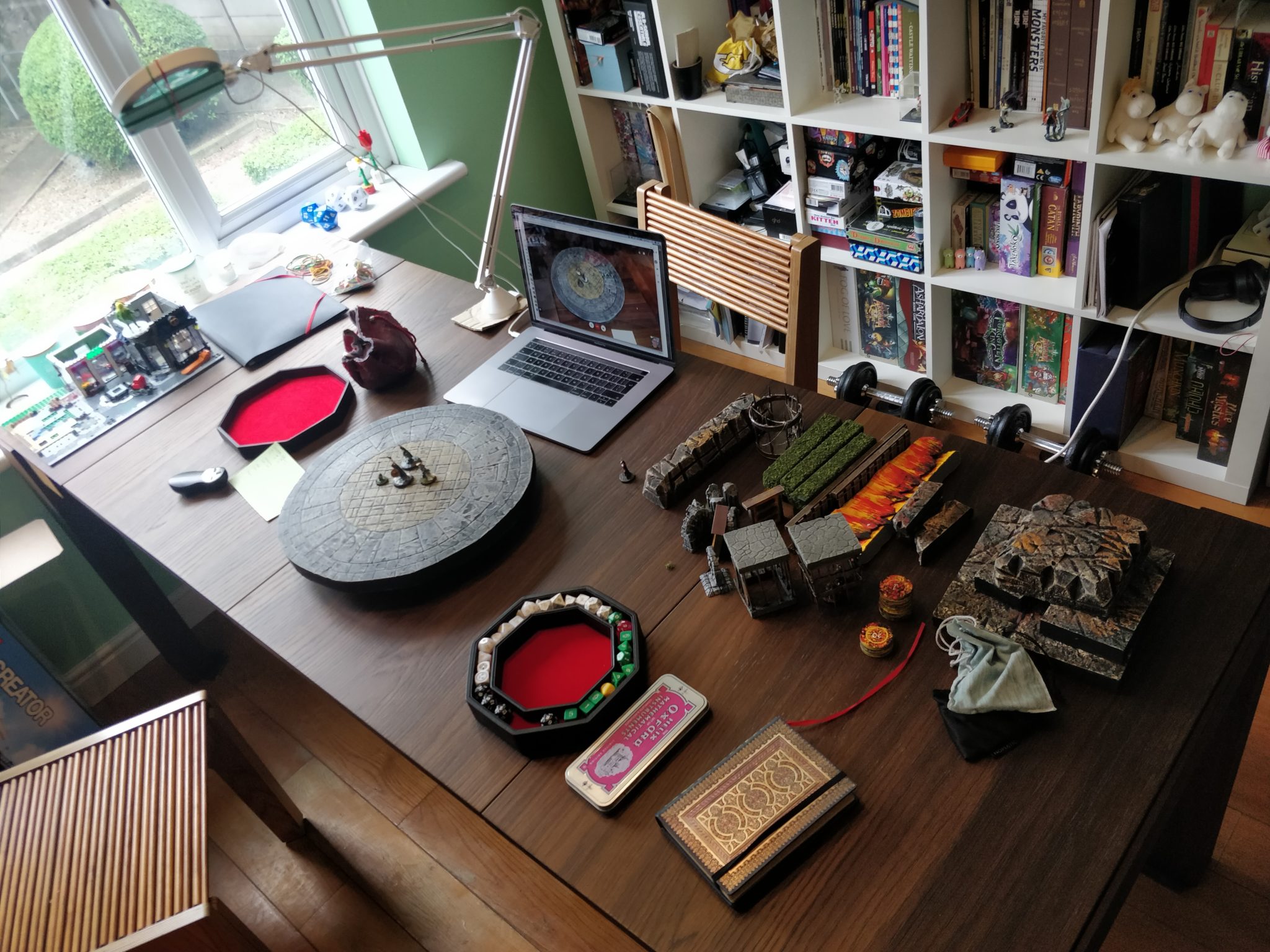