Following the successful, but unappreciated, efforts to send the Demons back to the Abyss, our heroes had no desire to help the High King with the looming threat of the hidden Necromancer.

Indeed, the only appreciation was from the commoners who named the party “The Hell Benders”.

Besides, Thorga had learned of the reappearance of the Trolls that killed his village in the hunt for the Dwarven treasure from the songs (which are its people, not gold).

He had learned the Troll Pack was heading towards Wildgate, the forest entrance to Mountainhold, the mighty Fortress on the most western peak of Titanheights.

Alas, not all would be joining Thorga in his hunt

Thorga and the ever-hungry Halfling Blacksmith, Ms Gentlefeet had been spending a lot of quality time together lately and at breakfast Ms Gentlefeet revealed she was with child and thus would stay in Dragonskeep, which was her home.

However, not wanting to let her companions down, she had crafted magical weapons out of rare glass she had found deep in the old dragon cave that is now Dragonskeep. Glass created by the fiery breath of dragon flame.

She warned her friends that naming weapons forged by dragon magic, would give the weapons additional abilities that could not be predicted as the name itself would be source to these abilities.

Seipora, the Sorcerer received a spell focus she named “Attaraxia” that with 3 charges (D3 replenished each day) could boost spell damage (if max rolled on Dam dice, roll dam again). Furthermore, if foe was killed by using Attaraxia, further 2 charges could be spent to capture the foe’s soul in a Soul Coin.

Kaari, the Ranger received two scimitars she named “Crystal Generation”, each with the ability to boost damage by rolling the damage dice again, if it roll max damage on the first roll.

Finally, Thorga, the Dwarven Paladin received a mighty great axe he named “Troll Splitter” with the ability to boost damage by rolling the damage dice again, if it roll max damage on the first roll.

As morning broke, the Hell Benders said their goodbyes to the commoners (who had gathered by the gate to send them off), and set of to Mountainwild, the forest to the West.

Not long after entering the forest they heard cries of battle. One side sounded like a Yeti, while the other sounded like Trolls.

Kaari, asked a young stag to investigate with her eyes looking through the deer’s. Unfortunately, the deer didn’t make it far as it was attacked by a Troll.

The party ran to the deer’s rescue, but arrived too late!

hiding behind trees they could see the Troll feed on the deer and to their disbelief, it was growing antlers! 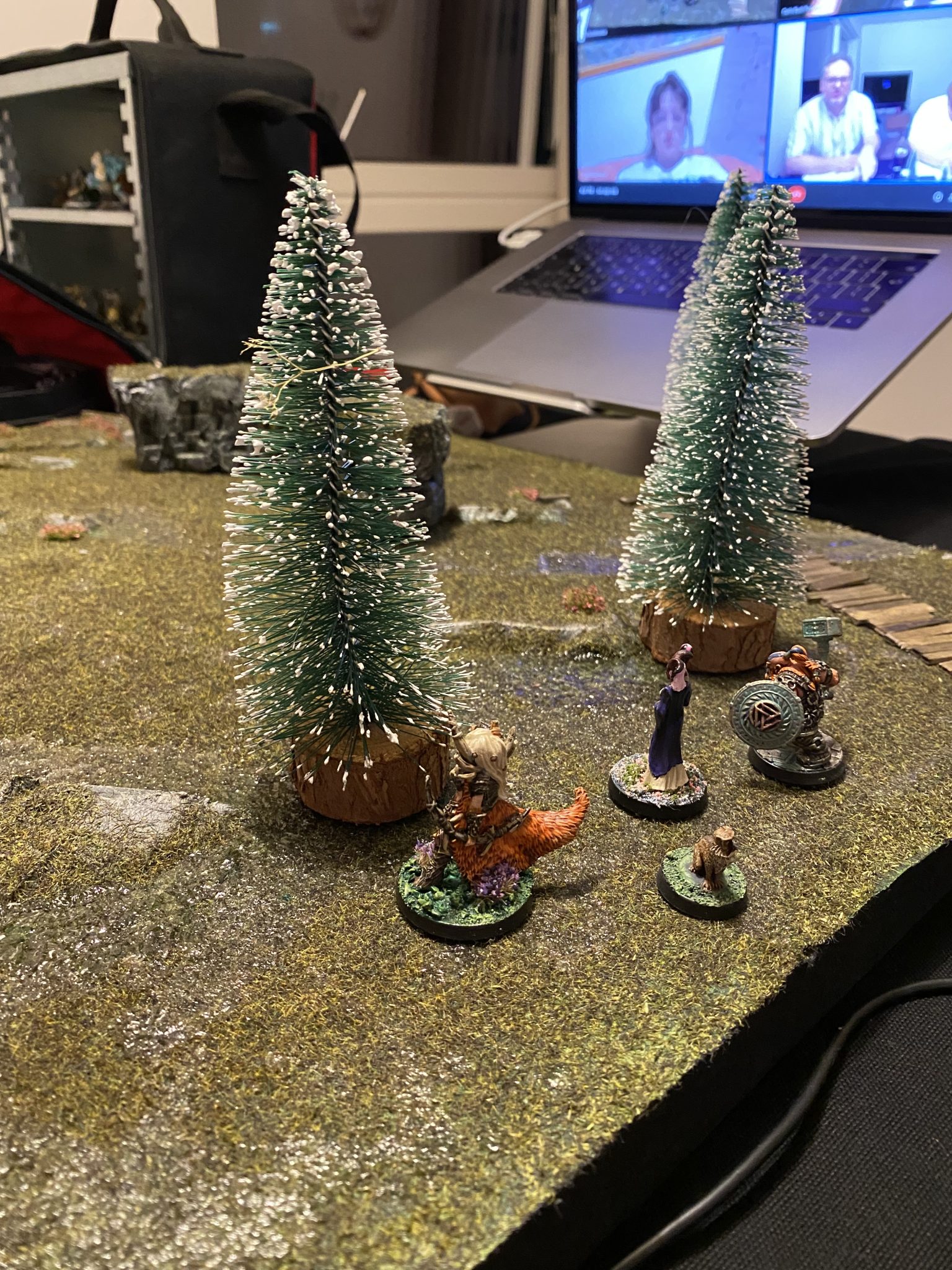 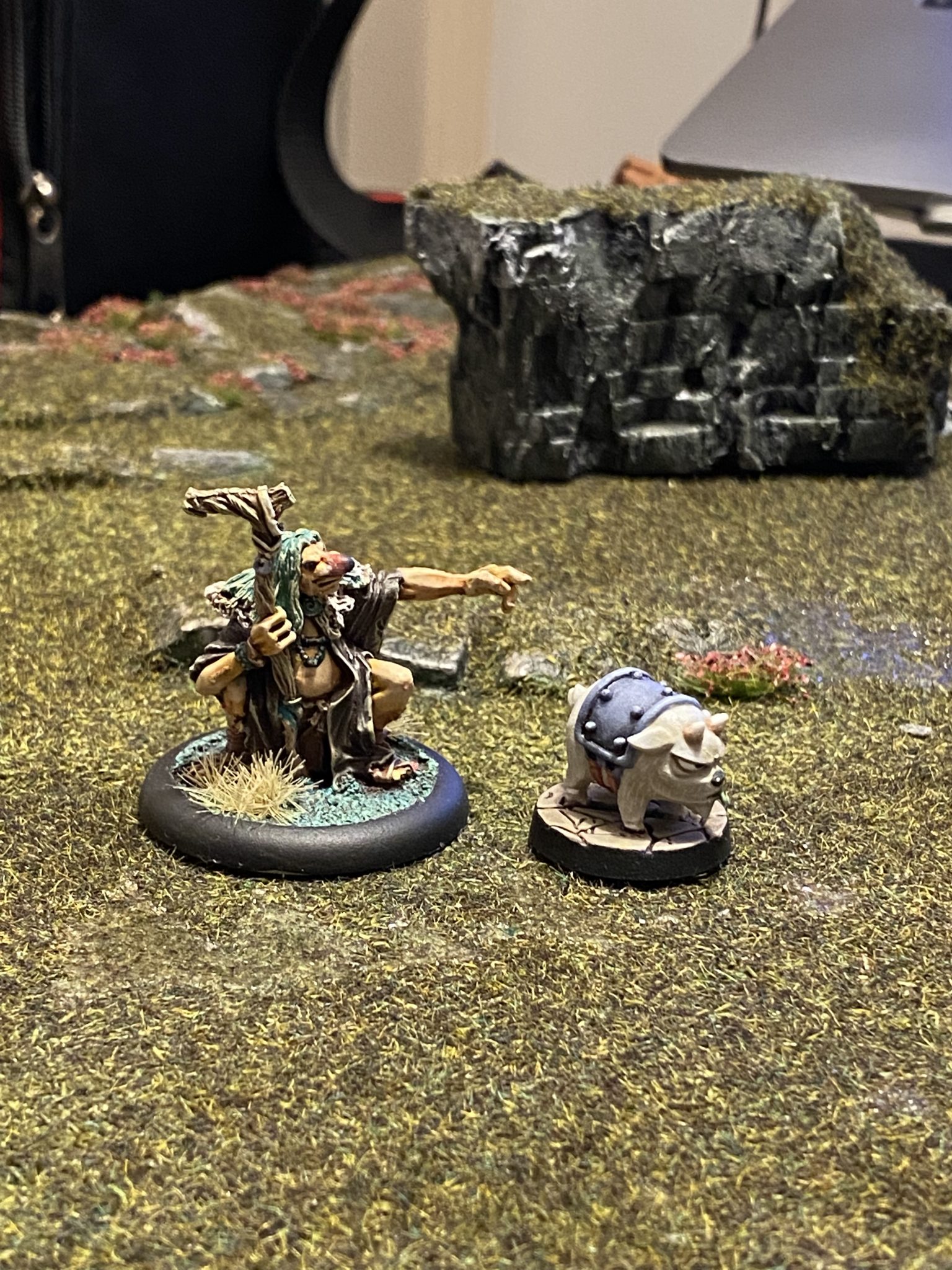 They immediately attacked the Troll from the shade of the forest. The Troll, furious being interrupted, looked for the culprits. 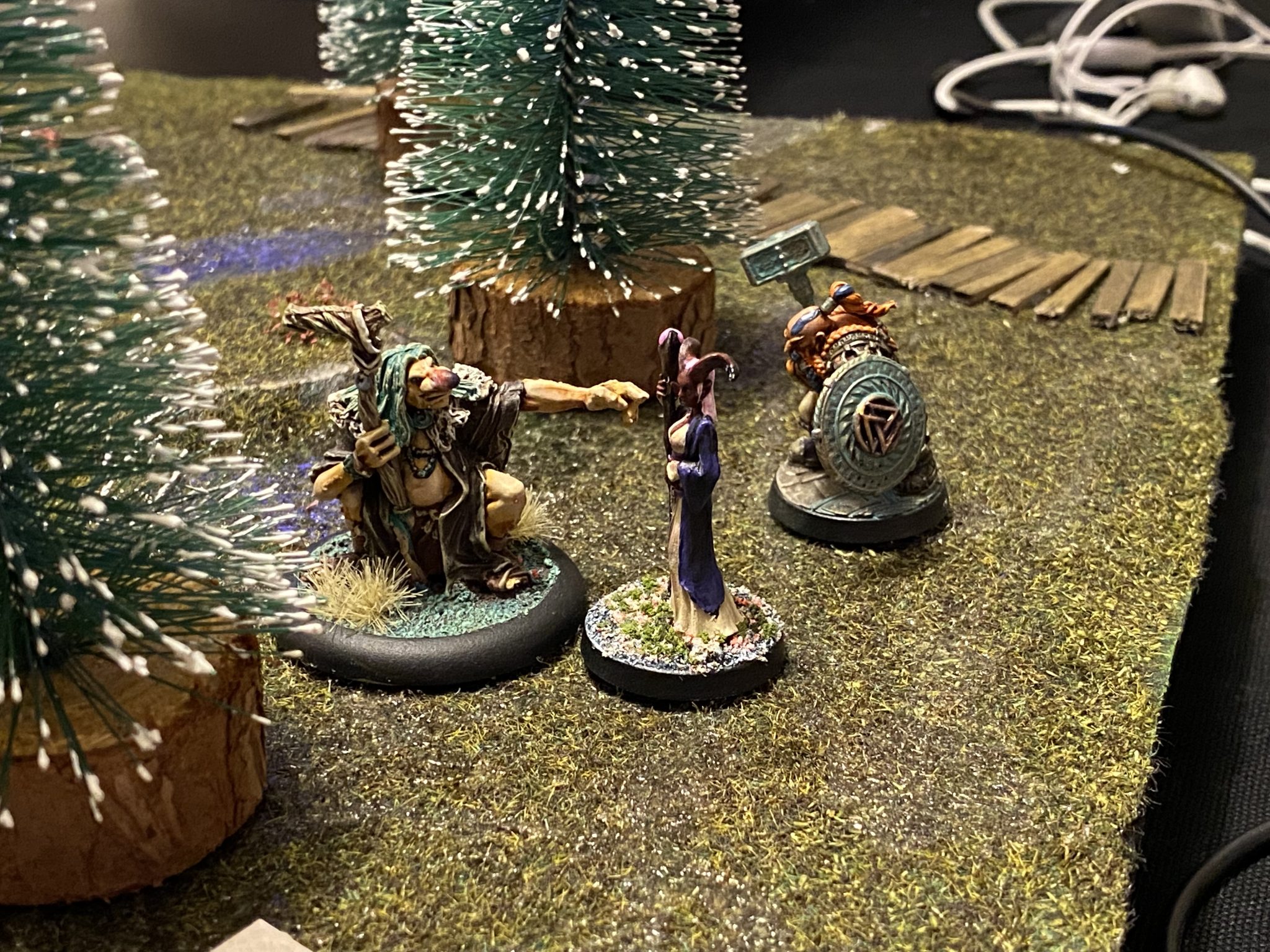 While the unusual Troll couldn’t spot Kaari, who was using her Ranger skills to hide, it spotted Seipora and came running for her trying to use its new antlers to gore Seipora.

It missed and stood face to face with Thorga and his newly acquired axe Trollsplitter!

Death of a Tailor

The battle cries in the distance had died out, so the party decided to make haste to Wildgate to warn the townsfolk.

On the way they came across a small Dwarven village named Silkenstead, famed for farming and crafting the finest silk.

The villagers told the party that Trolls had passed by days ago, and had eaten their local wiseman and tailor Tom Swiftneedle, leaving the village leaderless.

While it seemed odd the Trolls would have stopped only to eat one of the Dwarves, this was no time to ponder upon and the experienced heroes quickly organised the villagers and made it safely to the more protected Wildgate.

As the group of heroes and villagers made it to Wildgate, the townsfolk wasted no time receiving the villagers and sending warning up Mountainhold to the other towns.

But it was clear the town had already been overrun by a previous wave of Trolls leaving the front gate destroyed.

And similarly to the grisly tale of the eaten tailor of Silkenstead, the townsfolk said their local Living Ancestor Grombar Stonebite, had also been eaten. But by one specific Troll: A relatively smaller female Troll, who seemed to be the leader.

There was not much more the townsfolk could tell except that corpses of Trolls had either “VVV” written on them. Either as scars, tattoos or warpaint.

But again time was precious and the heroes needed to arrange for fortification of the destroyed gate using a heavy horse cart they covered with kay and drenched in Dwarven spirits. 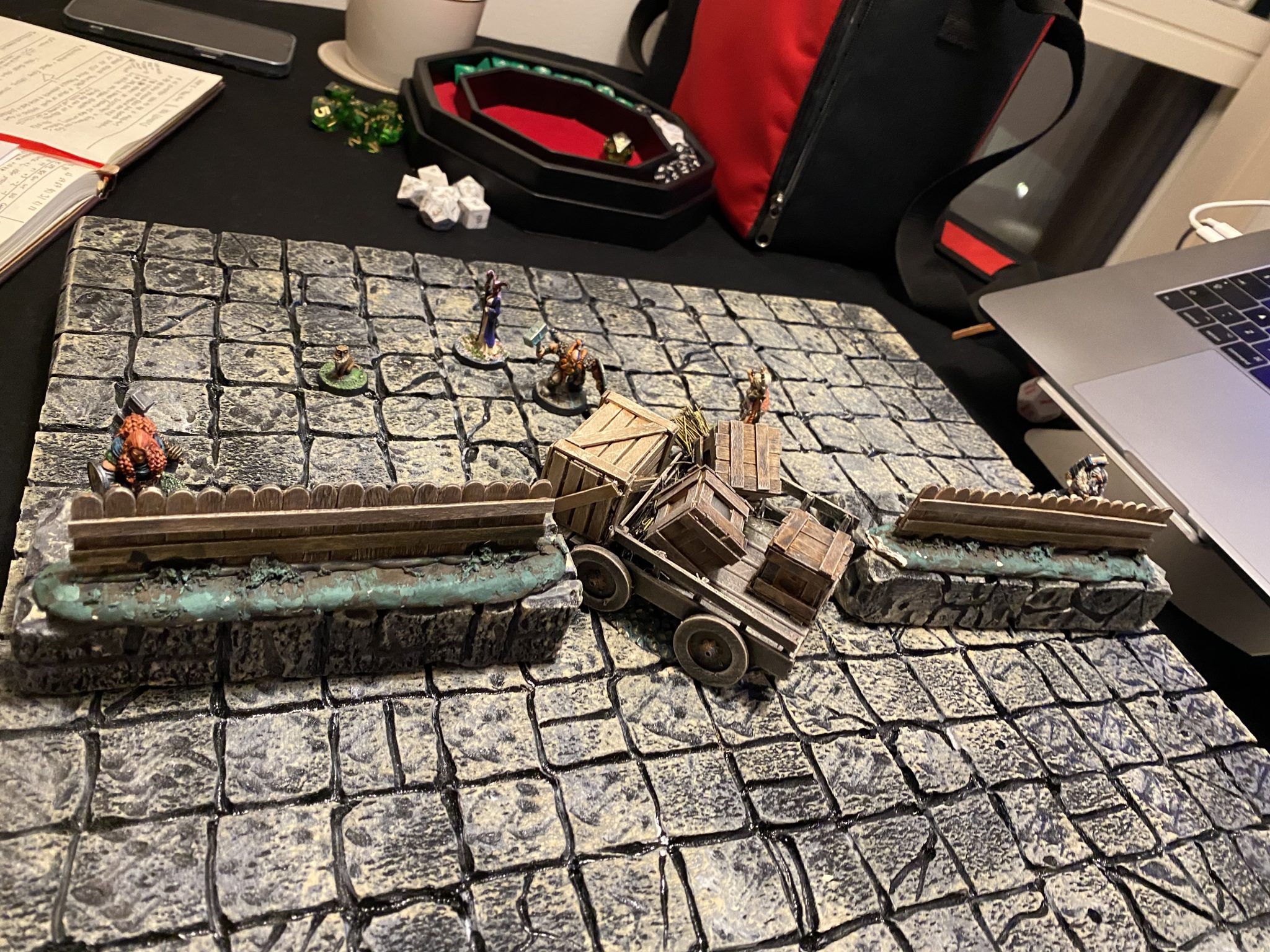 Just in time for a small group of Trolls to emerge from the forest led by two huge ice-blue Trolls. 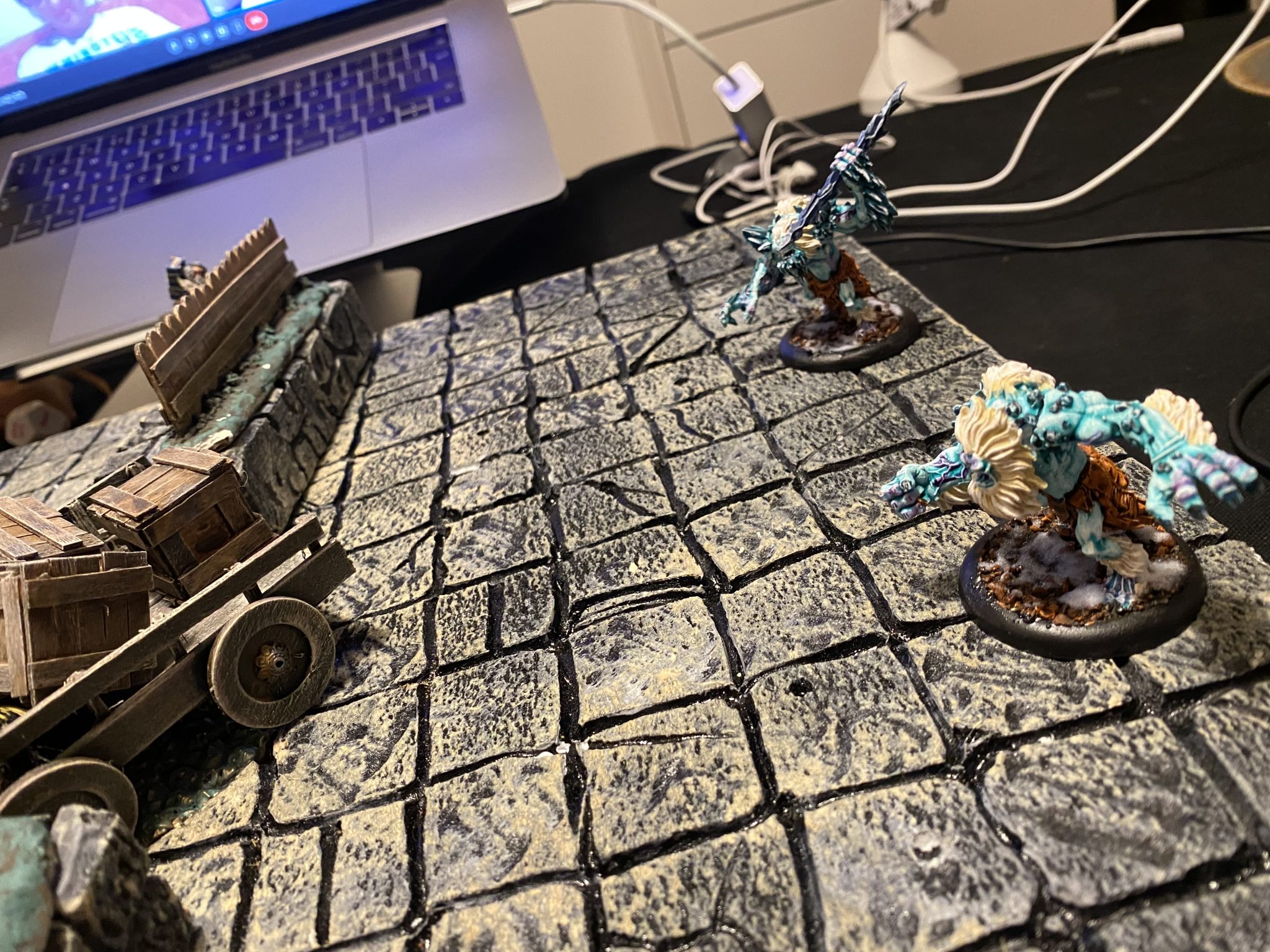 As the local Dwarves fought the regular Trolls, the heroes focused on the icy abominations that swiftly approached.

Kari cast Spike Growth to slow them down, but one Troll was so fast it got up on the cart and managed to breath icy breath across the defenders before the cart went up in a massive fire explosion. 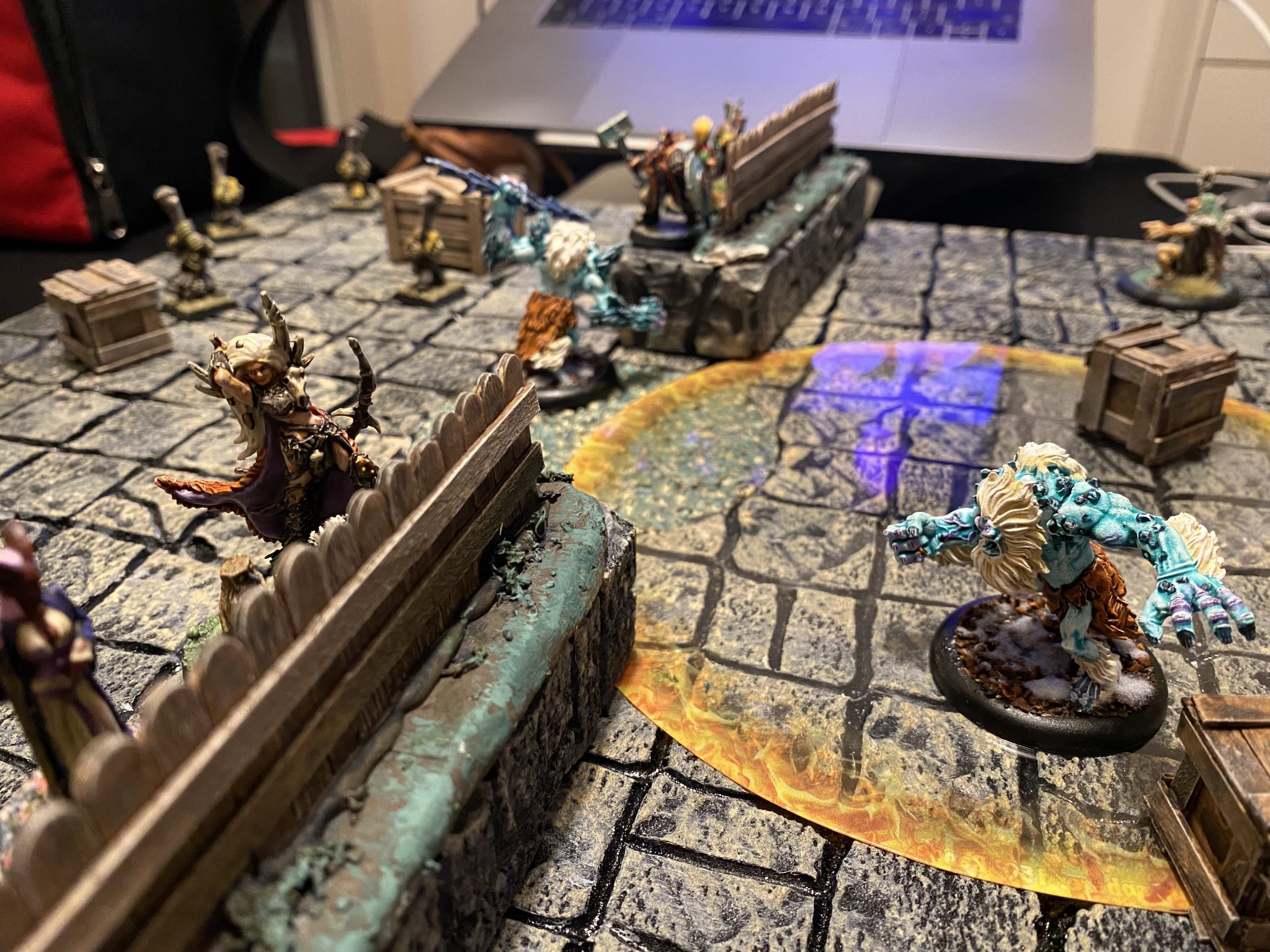 Seipora and Kaari focused fire on the slower Troll, while Thorga faced the second Troll on his own. 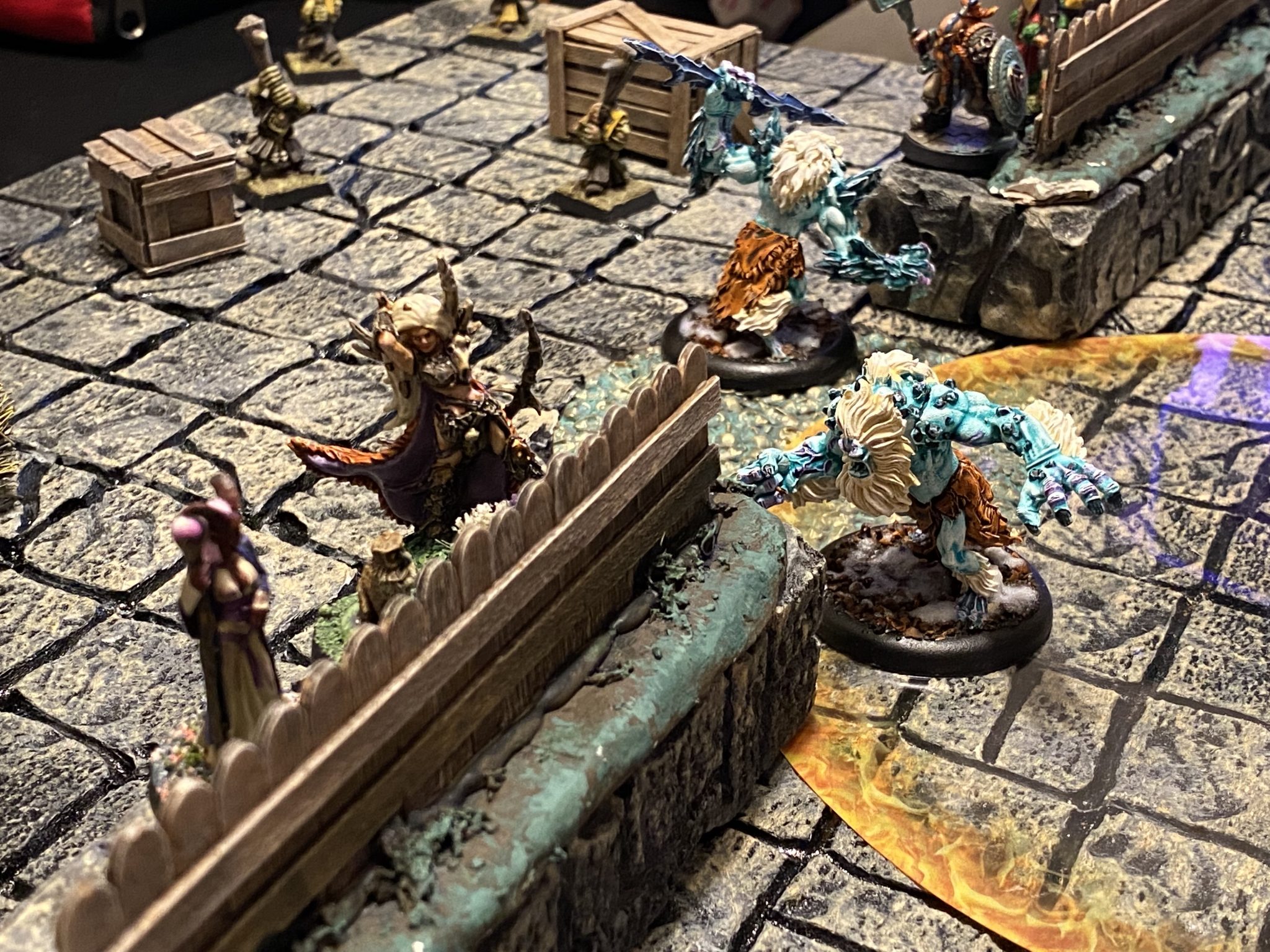 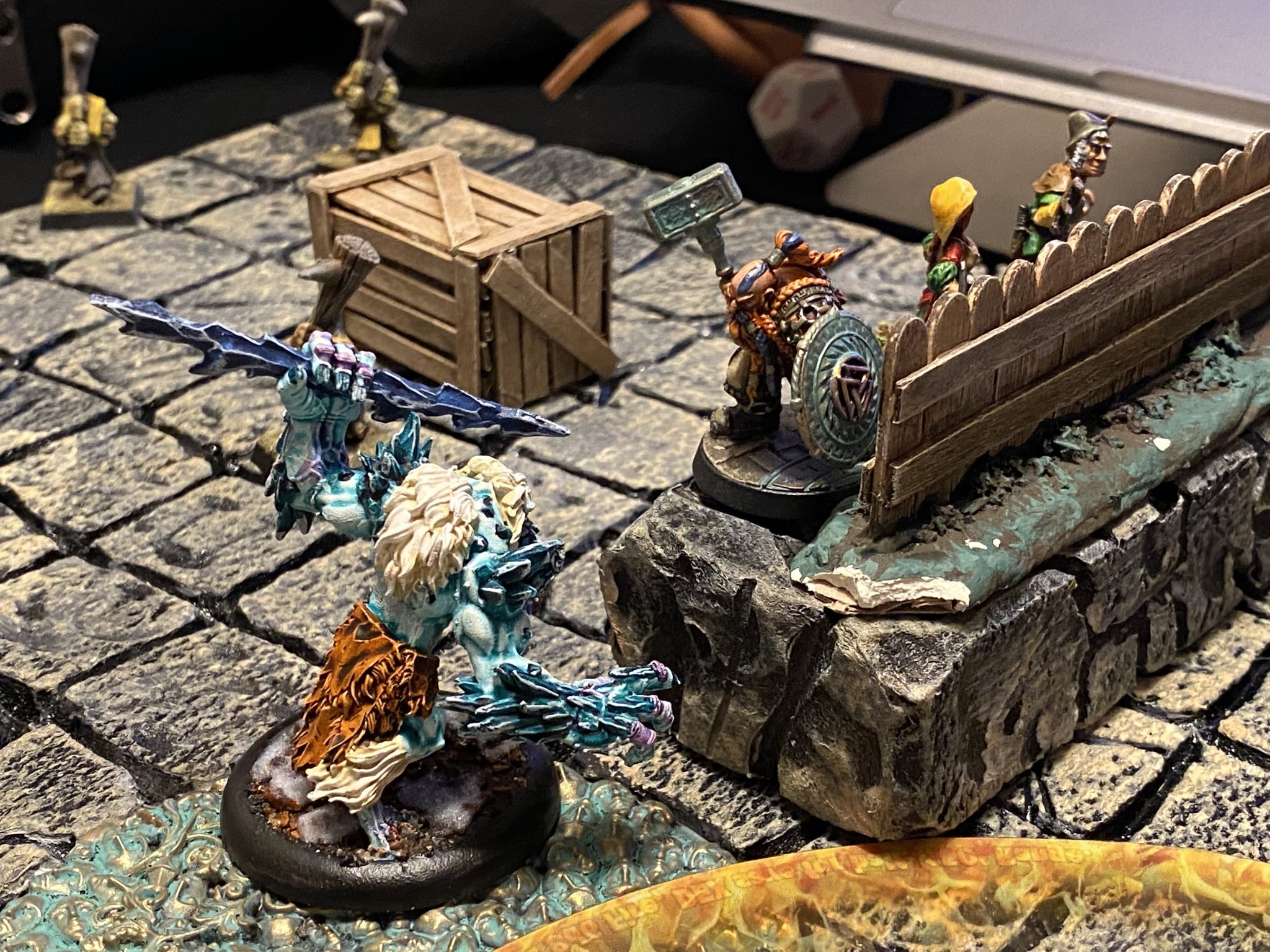 This is when the heroes noticed problems behind them.

The sneaky Night Goblins living inside the mountain, used the commotion to appear from the ground scattering all over, stealing what they could, which meant the local Dwarves suddenly had to deal with another, more familiar, foe. 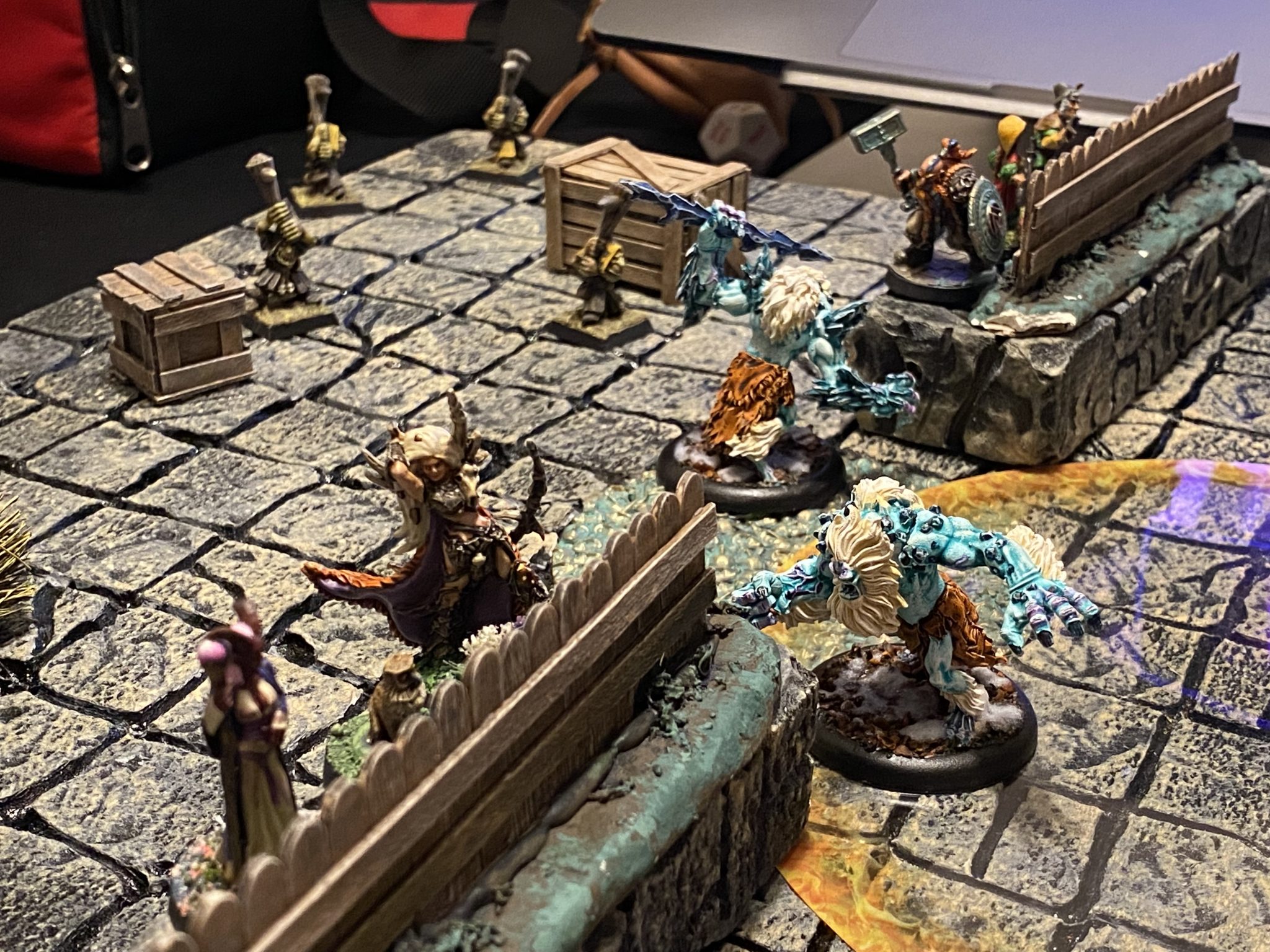 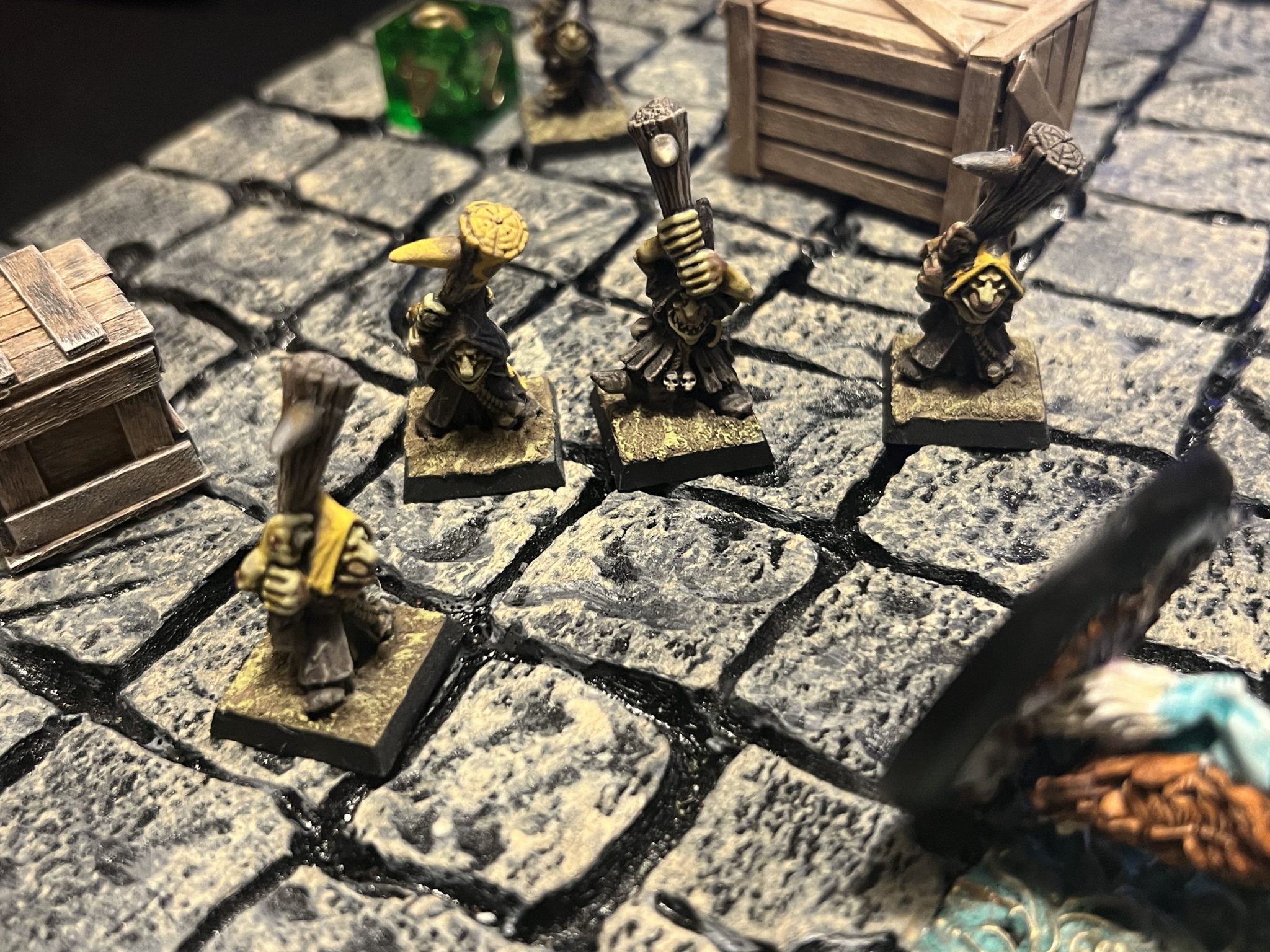 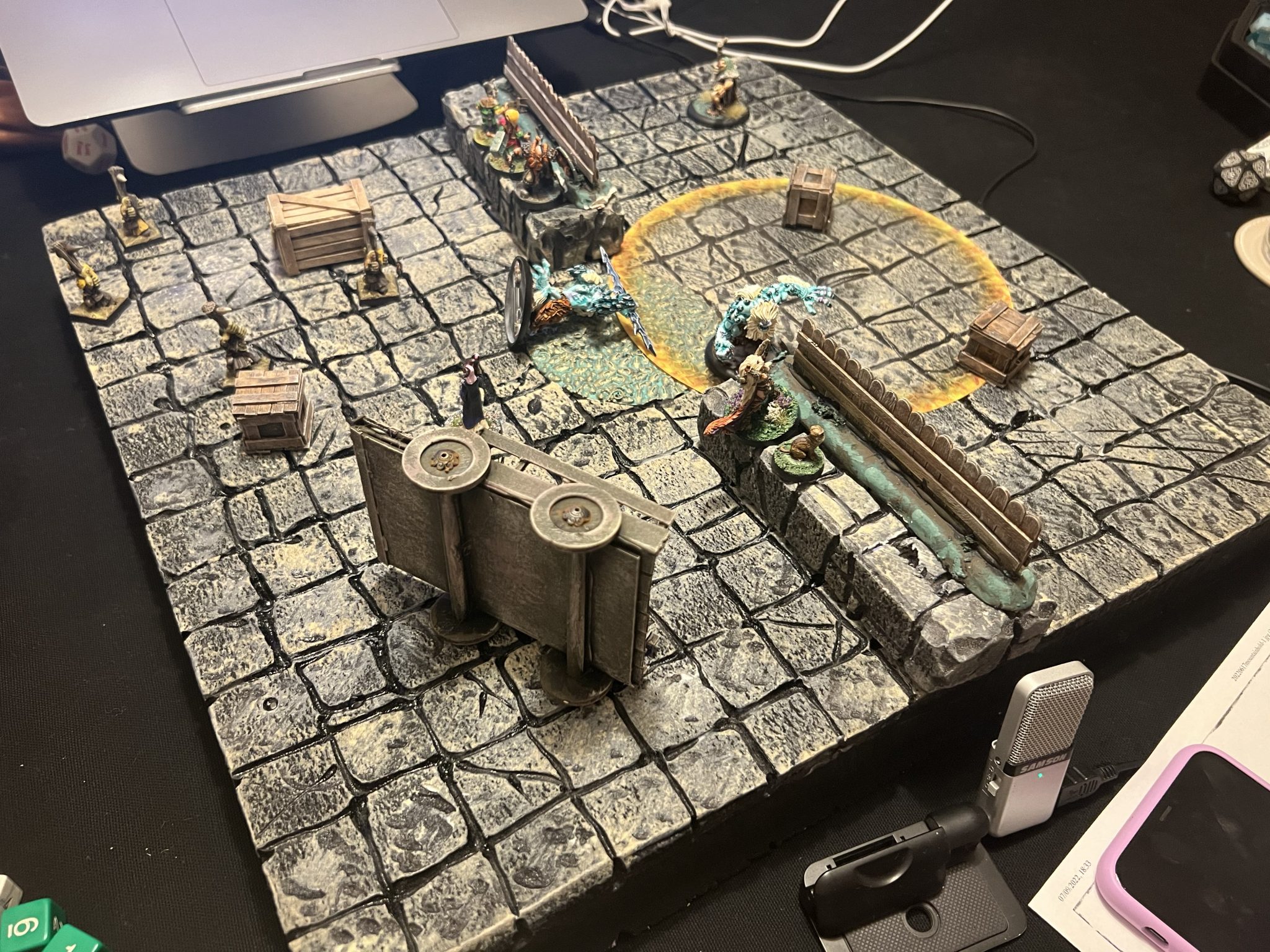 The worn out heroes were given bed and almost immidiately feel asleep. 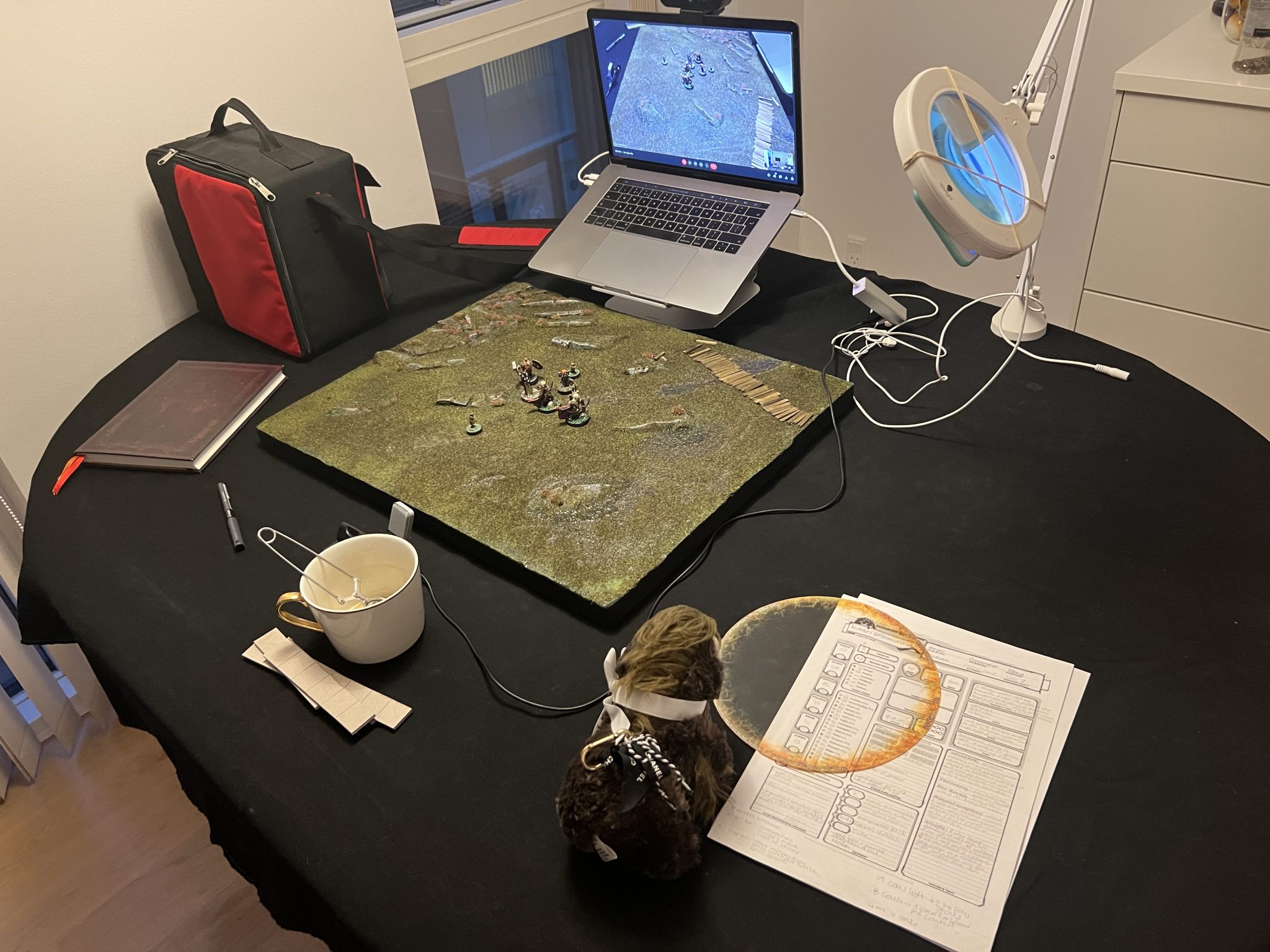 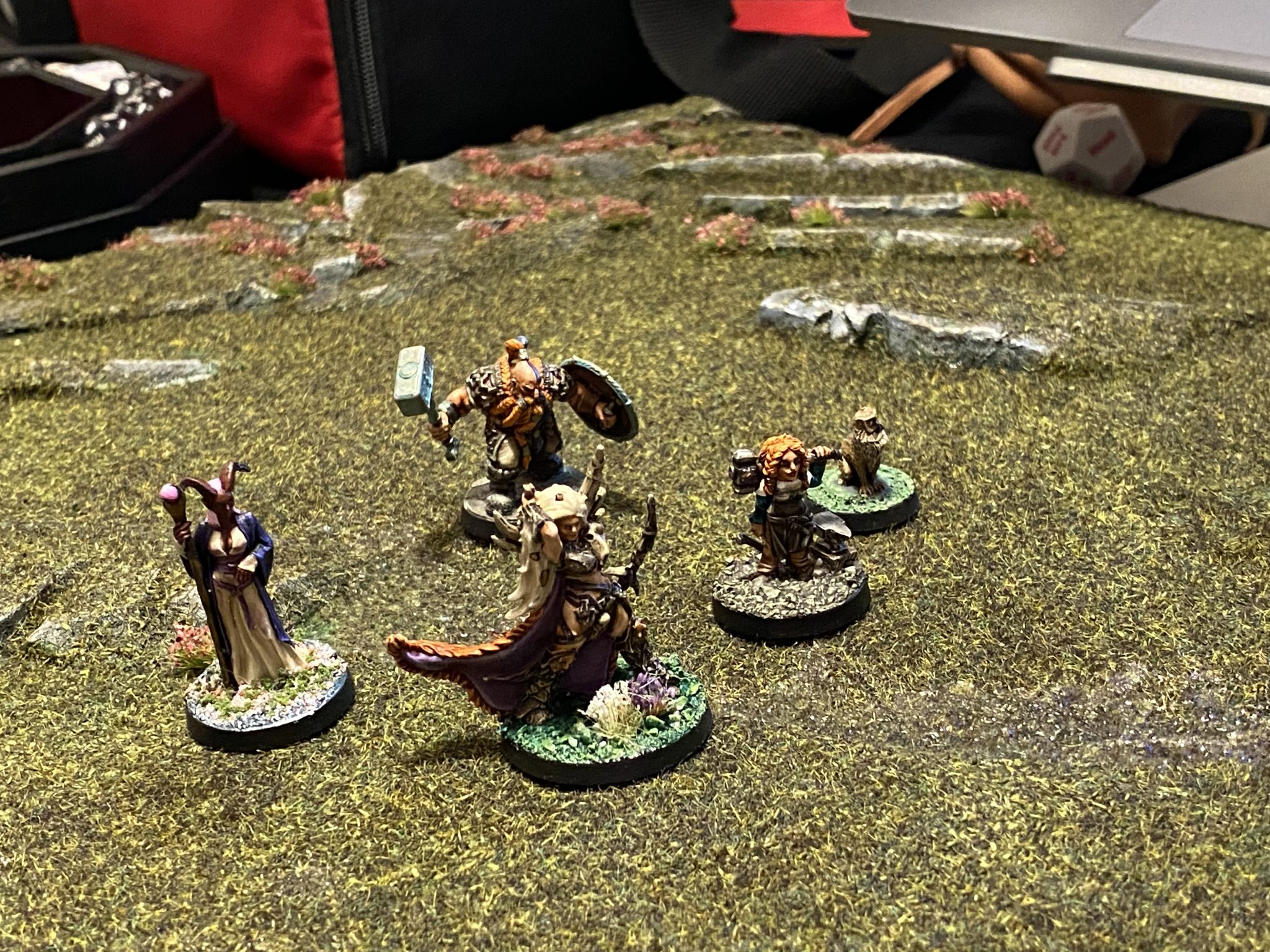