This year I incorporated the Christmas game into our campaign rather than running a Christmas themed oneshot.

Having faced three waves of trolls (and an attempted sabotage of their winter storage), the townsfolk of Wildgate were grateful for the help of our heroes, The Hell Benders, but they were also worn out by their continuous misfortune.

But as it started snowing, they all started cheering to the surprise of our heroes.

It turned out that each year the first snow brought a magical “snow bridge, a bridge made of snowflakes frozen in the moonlight leading up to a portal.

However, Father Winter did not emerge from the portal nor did his Winter Gnomes.

Our heroes decided to investigate.

As our heroes crossed through the portal, they found themselves in Winter Wonderland, a snowy realm in the Feywild, a plane none of our heroes had visited before and had little experience with.

Kaari used her Primeval Awareness. But to her surprise all that happened was a tiny invisible fairy turned visible in front of her eyes, turned around and slapped Kaari with a grumpy “how rude!” comment before she flew away leaving the Human Ranger stunned and slightly embarrassed.

In front of them lead a road up to a distant large magnificent house. The road led through a valley with a steep wall down the left side of the road and a lower, but also steep, wall down the right hand side with a forest above.

The heroes chose the safe footing of the road as they proceeded to the house. 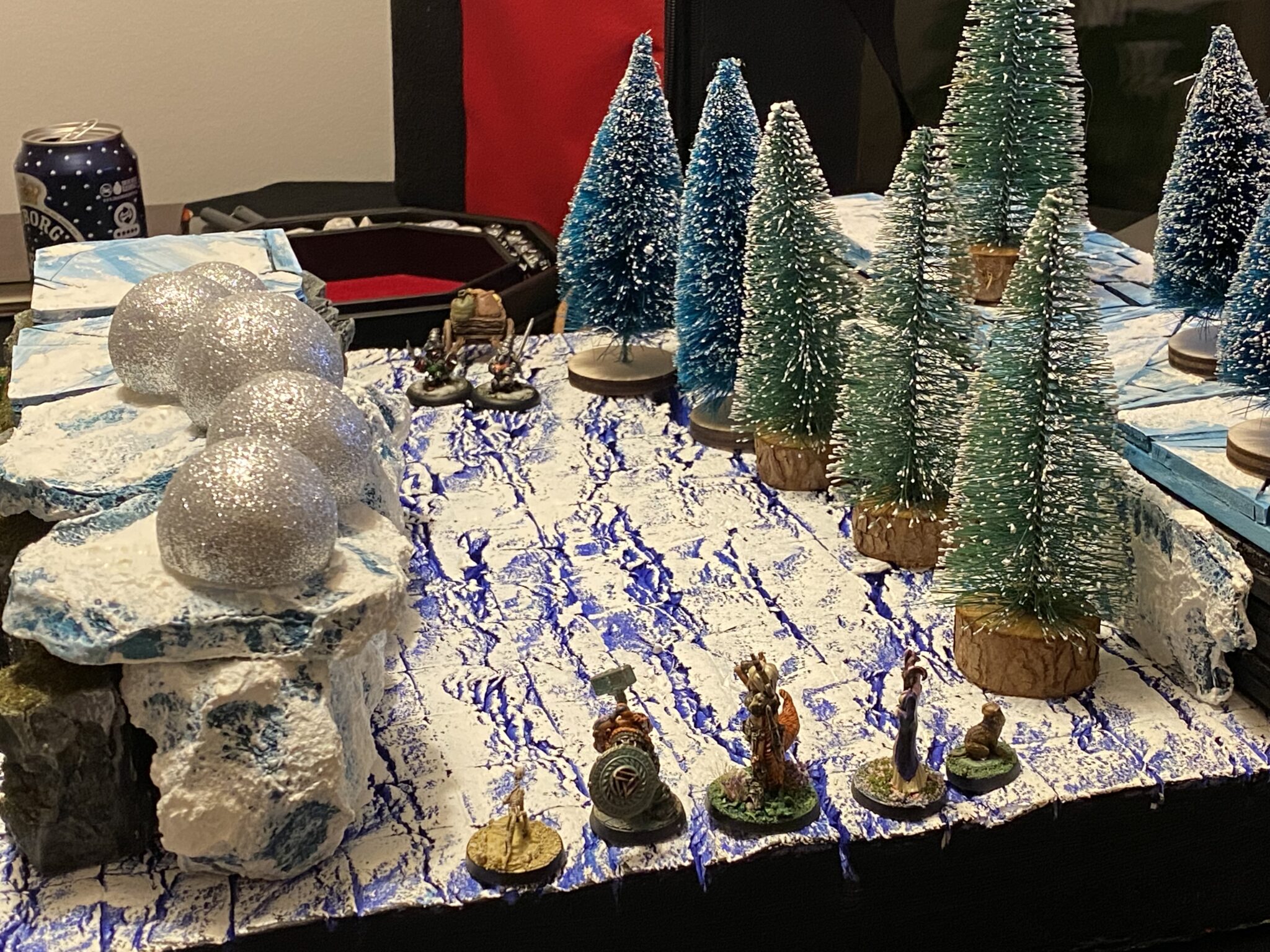 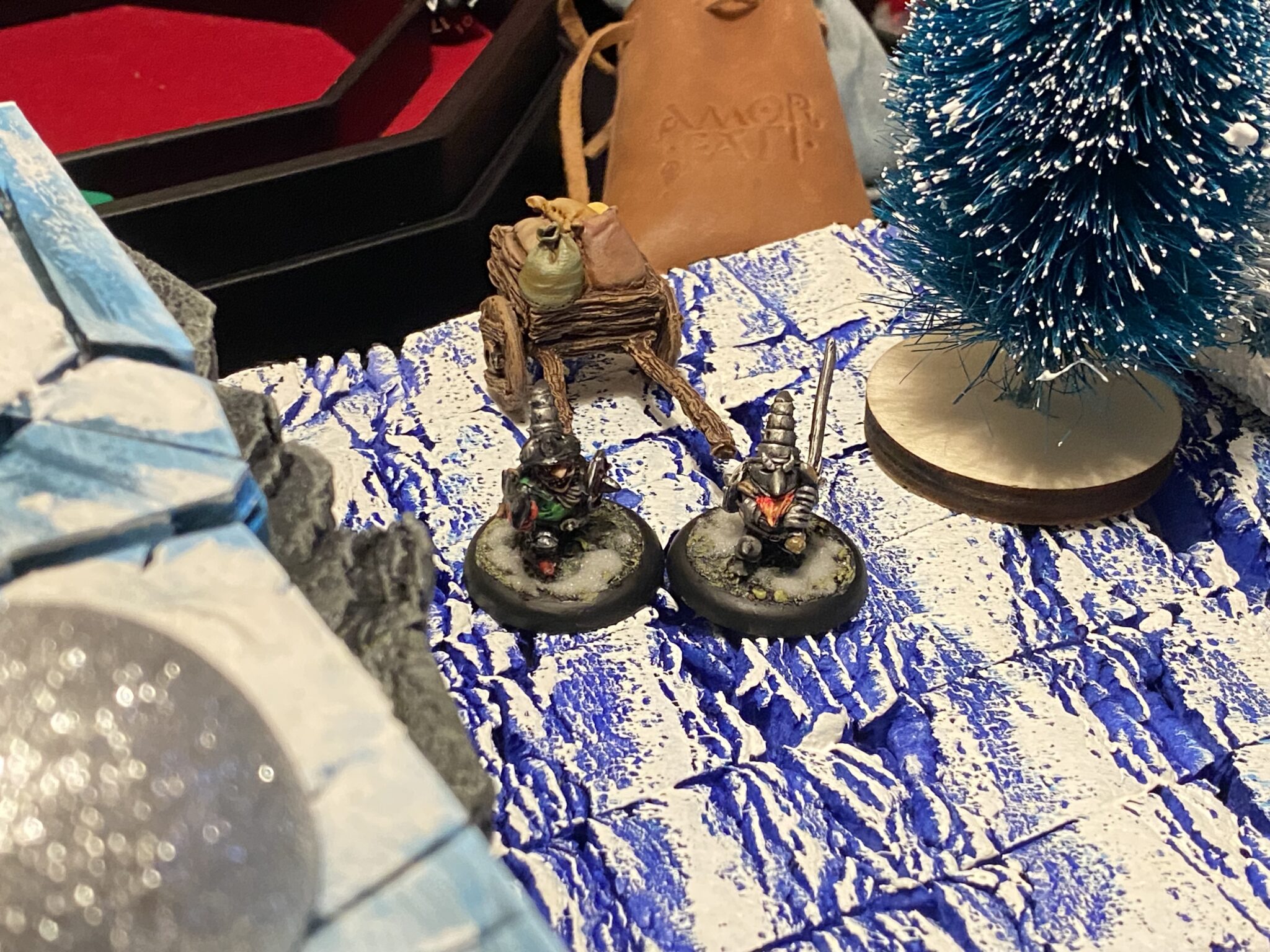 The gnomes explained they were bringing presents to Wildgate, which our heroes found odd given the townsfolk was expecting Father Winter himself. 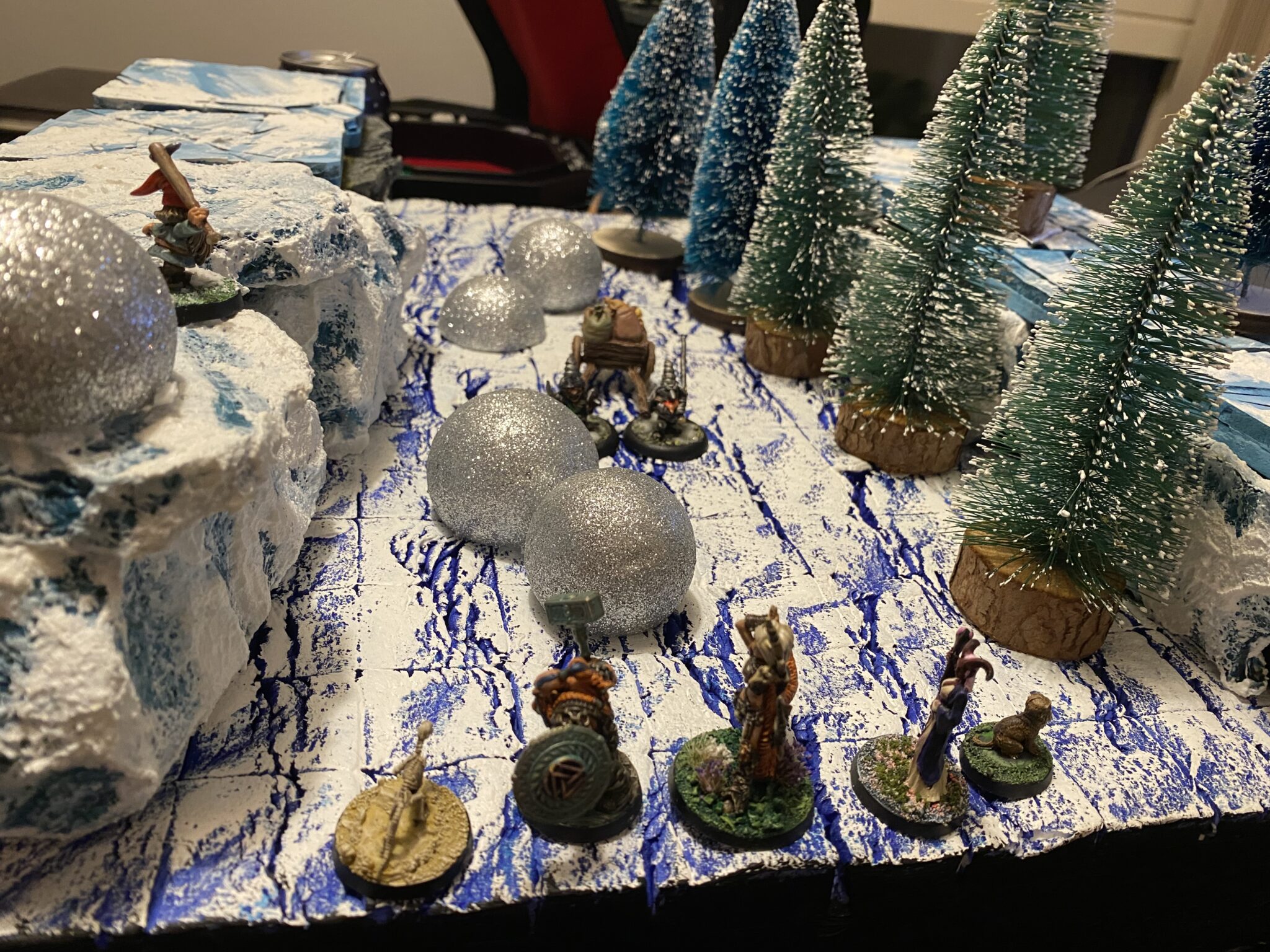 But before they could investigate much further, large chunks of snow came down from the steep hill side to the left.

It was an ambush by Rebel Winter Gnomes. 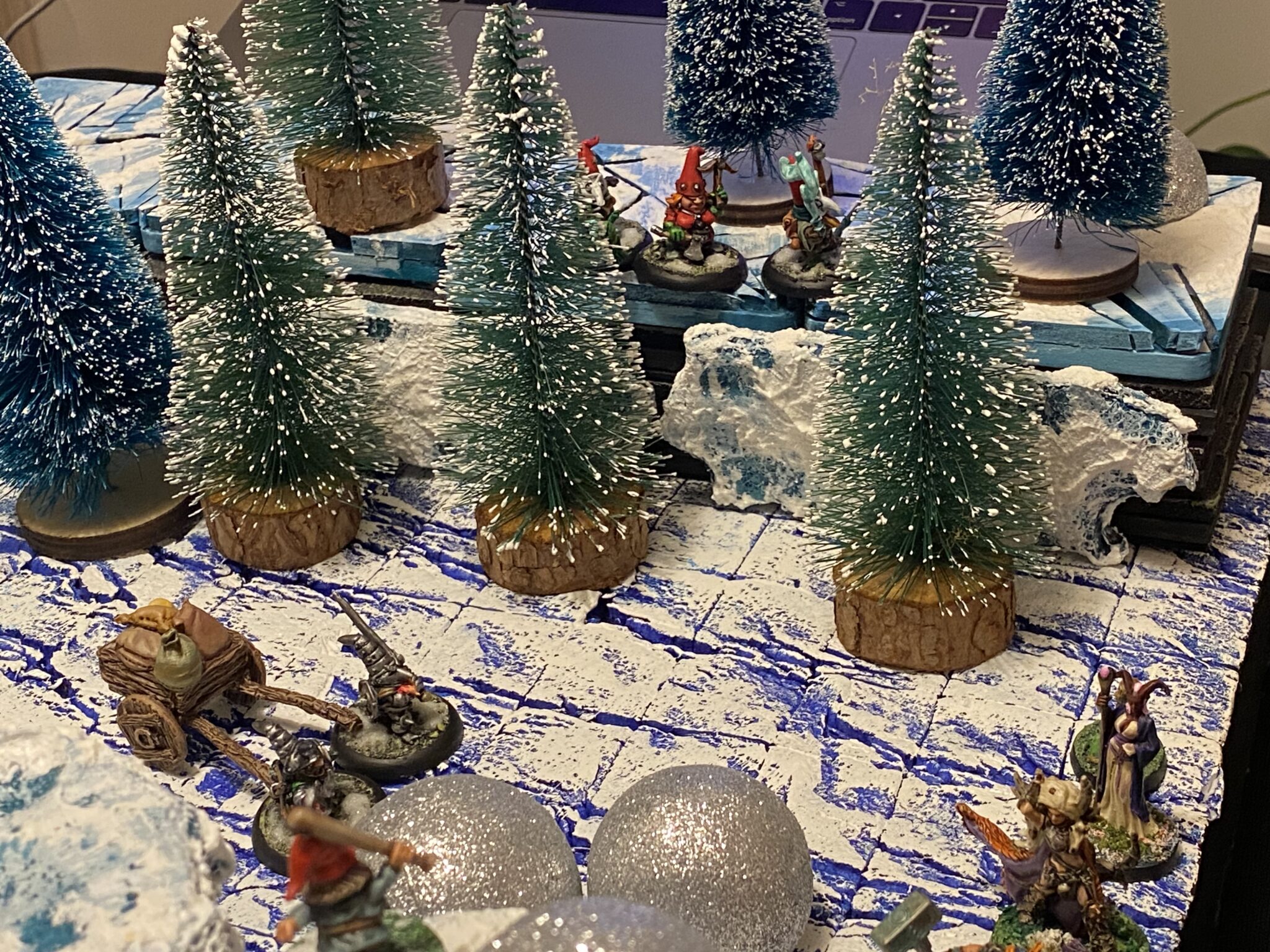 The snow blocked the cart from moving and more Rebel Winter Gnomes appeared from the forest side led by a female Winter Gnome. 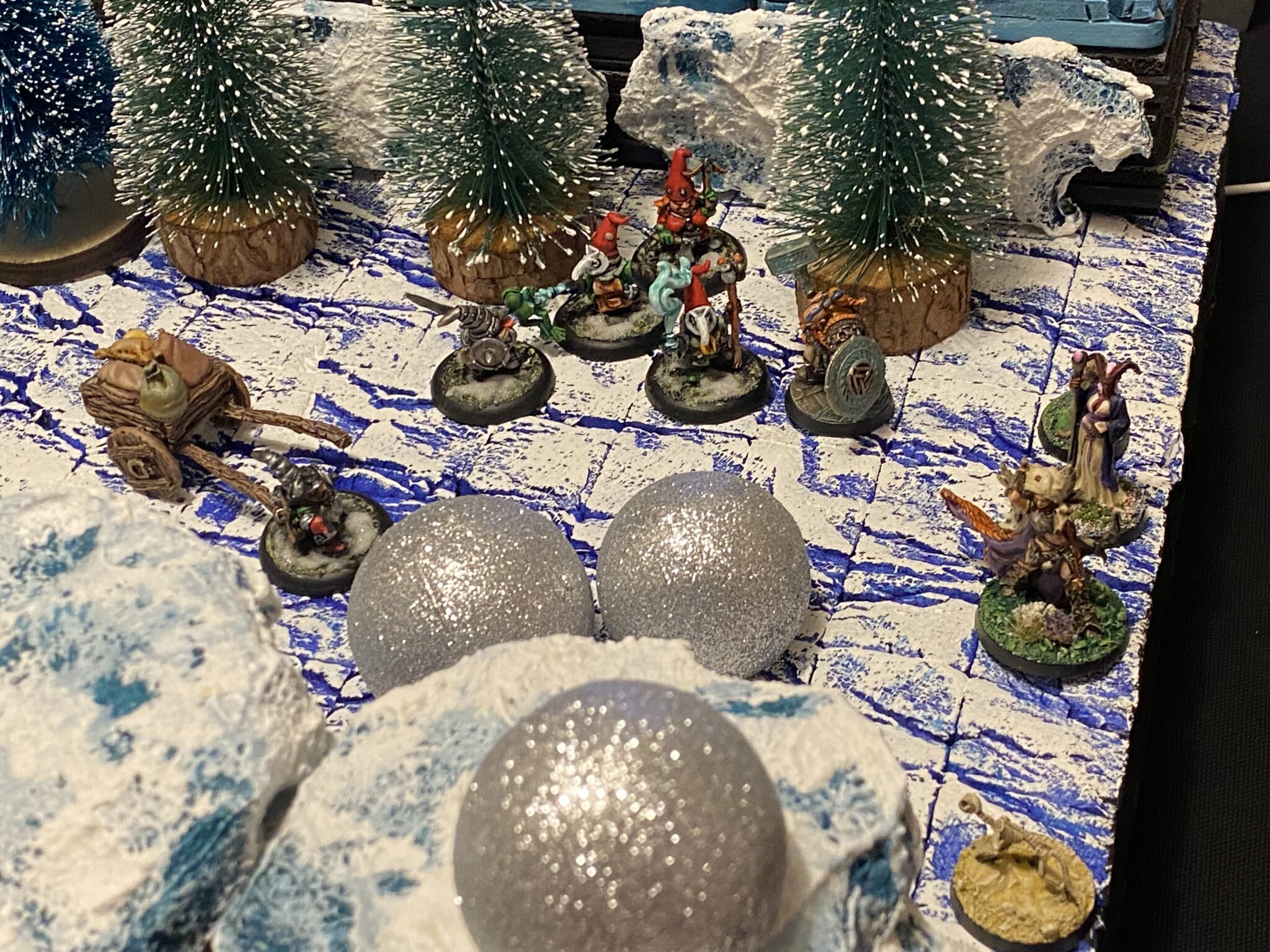 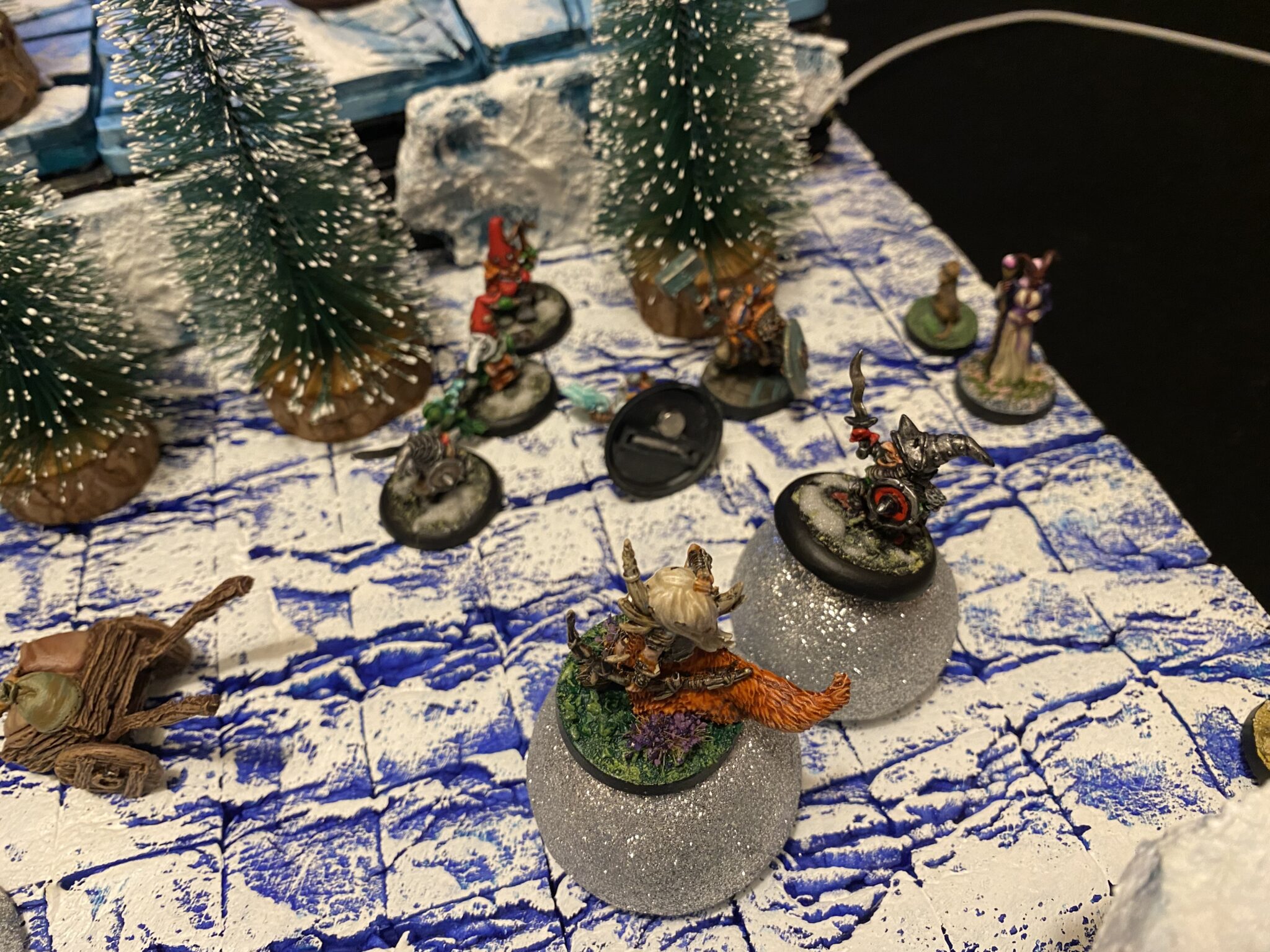 Kaari, trying a less aggressive approach, roped in a Winter Guard Gnome, who. she interrogated quickly, but the poor Gnome was convinced he was representing Father Winter in this. 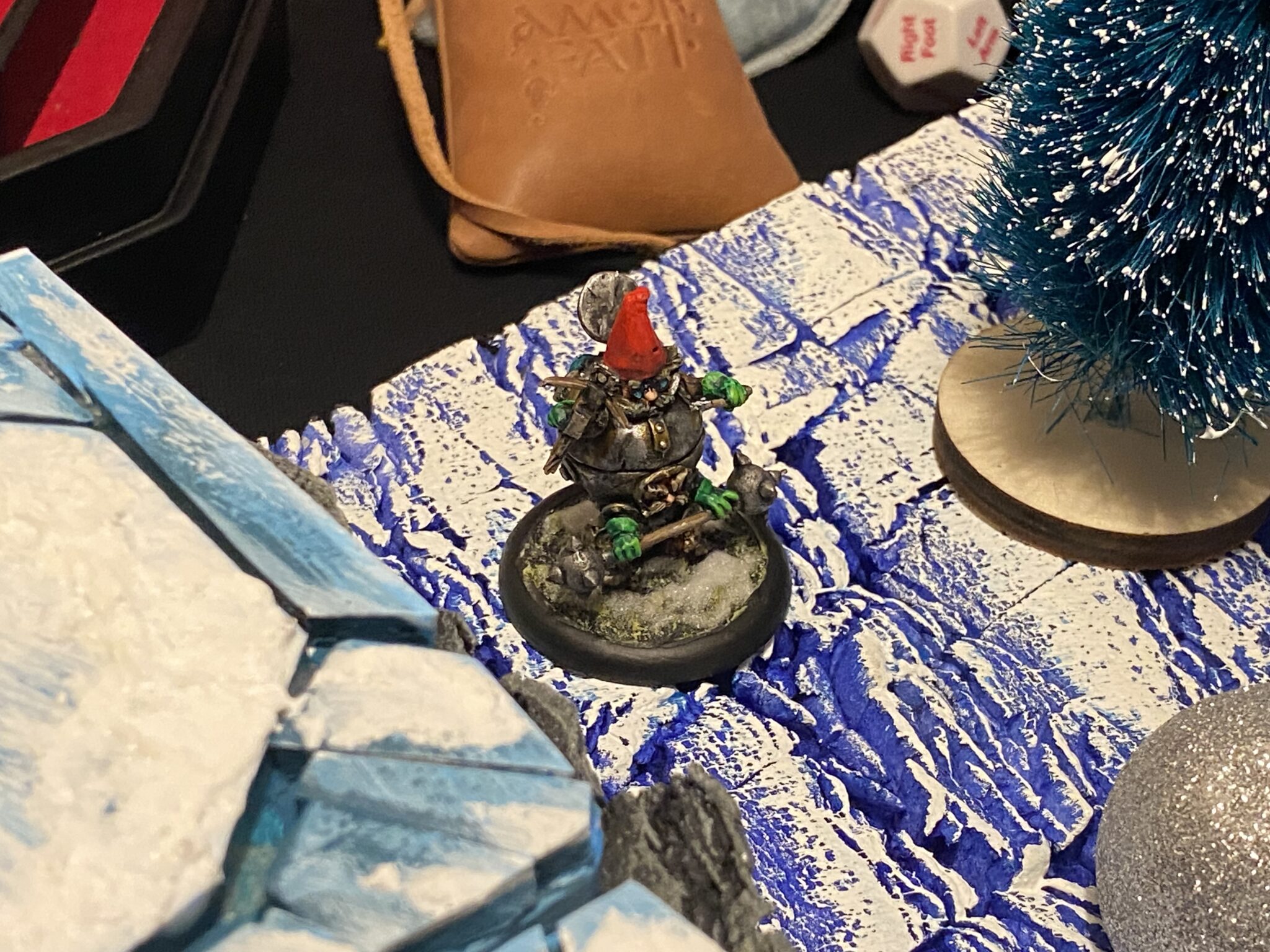 Kaari set in motion a plan to also capture the female Winter Gnome leading the rebels, but at that point an odd armoured, steampowered machinery appeared approaching incredibly fast.

The female Winter Gnome called it “The Juggergnome” in a surprised and shocked outburst before the rebels fled.

The Winter Gnomes operating the Juggergnome agreed to take our heroes to Father Winter now the battle was over.

While Father Winter’s House was both colourful and festive, the mood was more tense.

Winter Gnomes walked around in groups all in various degrees of armour.

And inside Father Winter was sitting without his wife, Mrs Winter, by his side. Instead a cloaked figure was standing behind him in the shadows.

Father Winter was not forthcoming with much information but offered the party to stay overnight as a snow storm was brewing outside.

Room with a barred view

The room our heroes had newly installed bars in the windows and they could hear guards posted outside.

A Winter Gnome brought them food but rushed away quickly.

Thorga tried to reach into his Box of Many Things for help, but to his surprise, the Box could talk here in the Feywild. And after some negotiation it finally let Thorga reach into its mouth and pulled out a small dog whistle.

Not knowing what to do, Thorga blew the whistle and the same Winter Gnome, who brought them food came back to pick up the dishes, but on her way out she squeezed Thorga’s hand and gave him a note from Father Winter urging our heroes to leave before they did more damage.

Now the party was truly worried for the situation and Seipora Polymorphed the guard posted outside and turned him into a mosquito. She quickly tried to kill it with a clap, but the small insect was too hard to hit.

In return it stung her (with a nat20) giving her 2 itching damage.

Our heroes silently made it to Winter’s Workshop… after a bit of a situation where Kaari (with a Nat1 roll) believed the door to be lethally dangerous and tried to prevent her friends from opening the door. 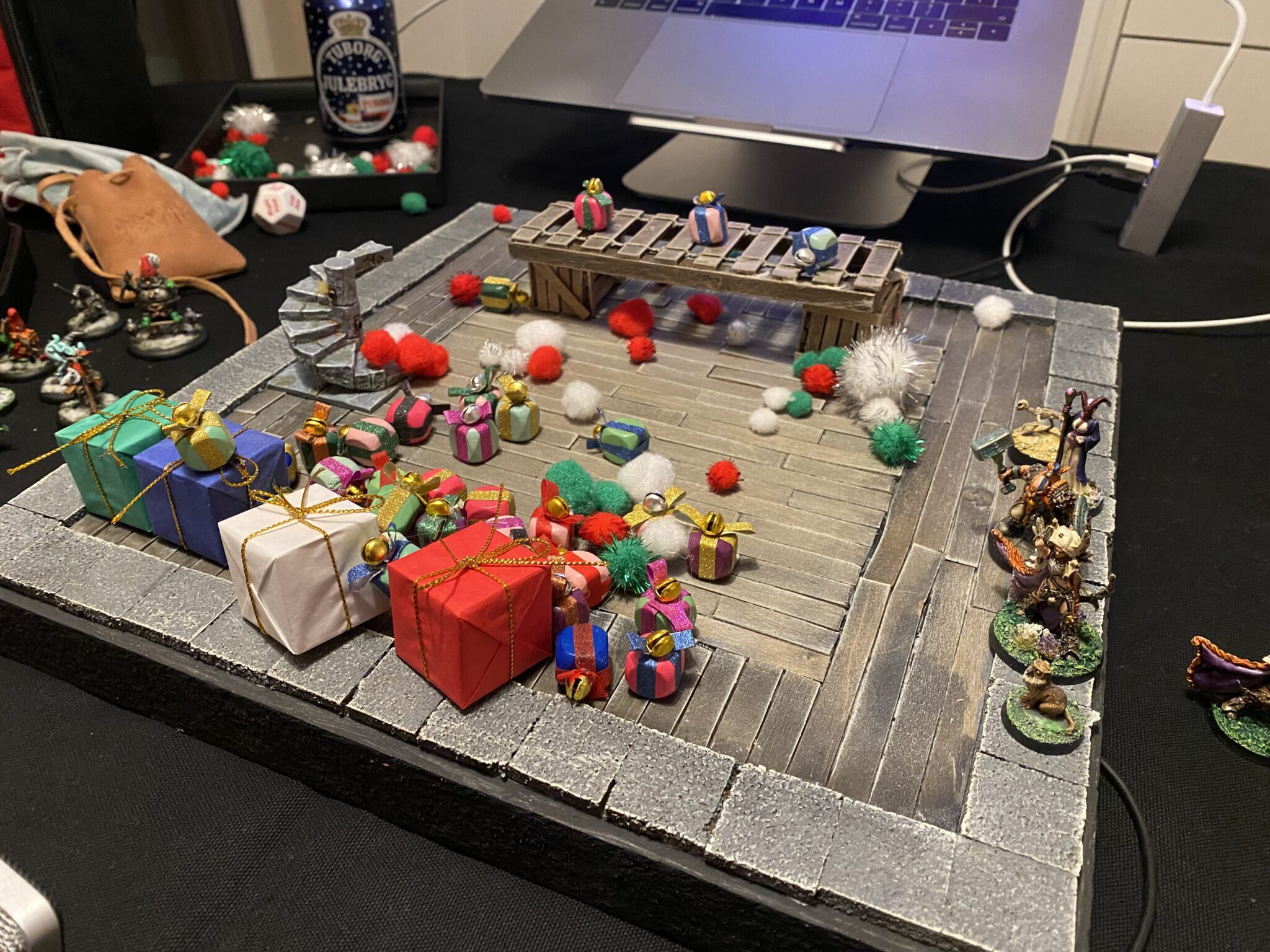 In the end Thorga smashed through the door entering a room full of presents and workbenches.

At the other end of the room was a staircase leading up to the sleeping quarters. 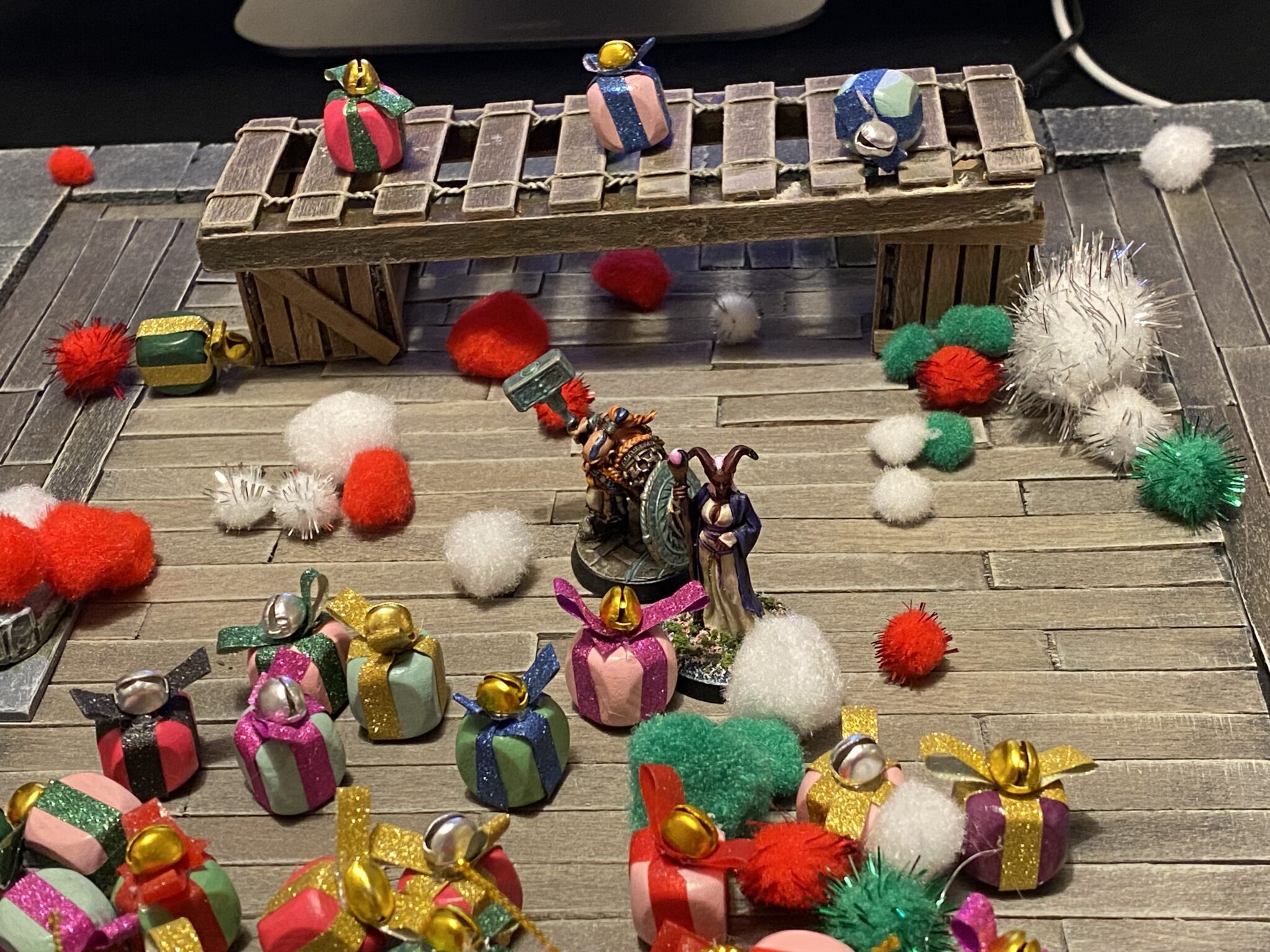 Being seasoned adventurers, the trio started to step elegantly between the presents spread all over the workshop.

Kaari tried to use her Primeval Awareness again, only to find the very same tiny Faery slapping her… again. 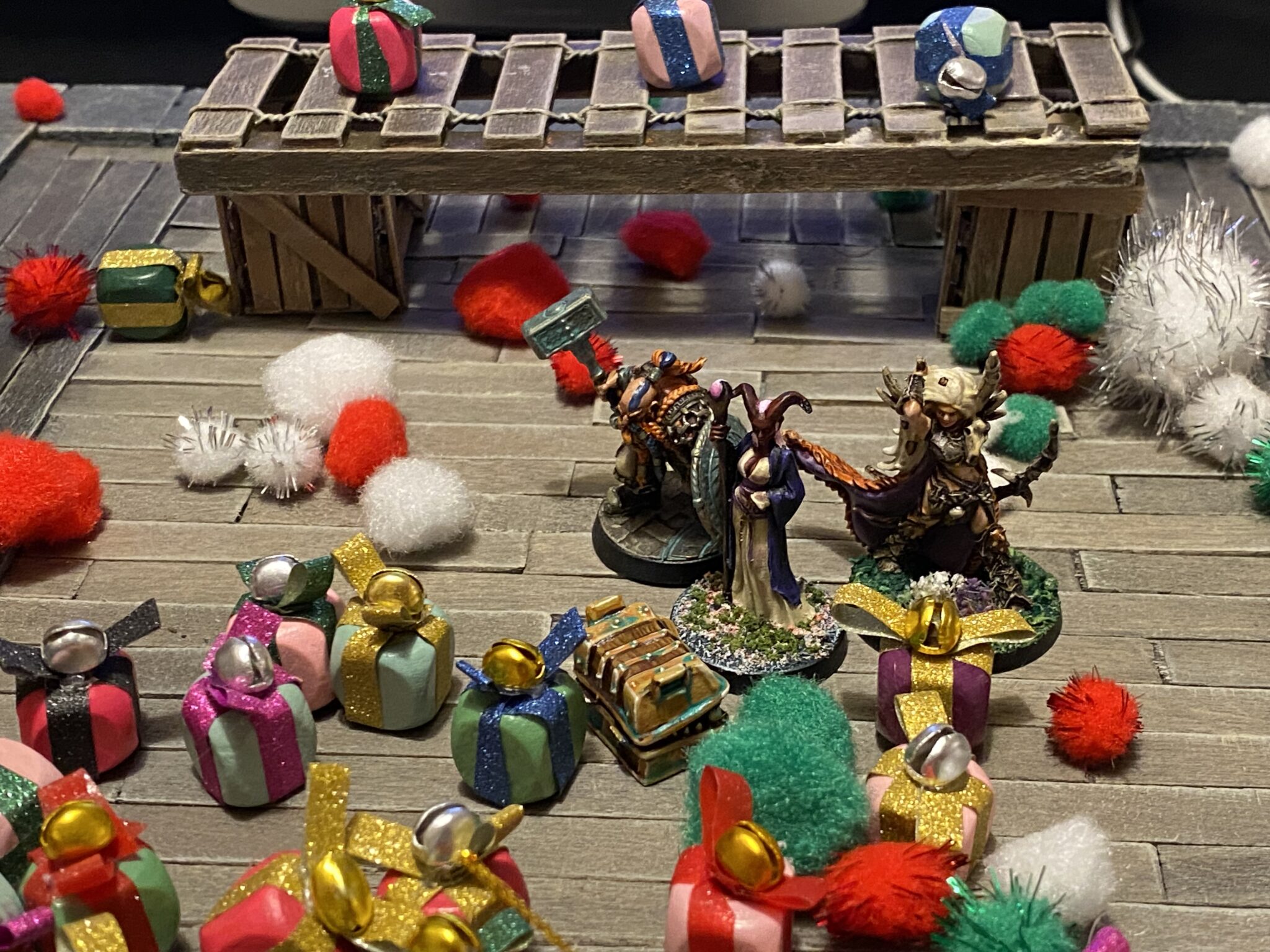 Seipora decided to investigate one of the presents, which suddenly opened a gaping maw with vicious teeth and a sitcky tongue grappling Seipora. It was a Mimic!

DM note, we have not faced a single Mimic in the three campaigns we have been running with these heroes. Furthermore, one of our players had never heard of Mimics before, which was great fun 🙂 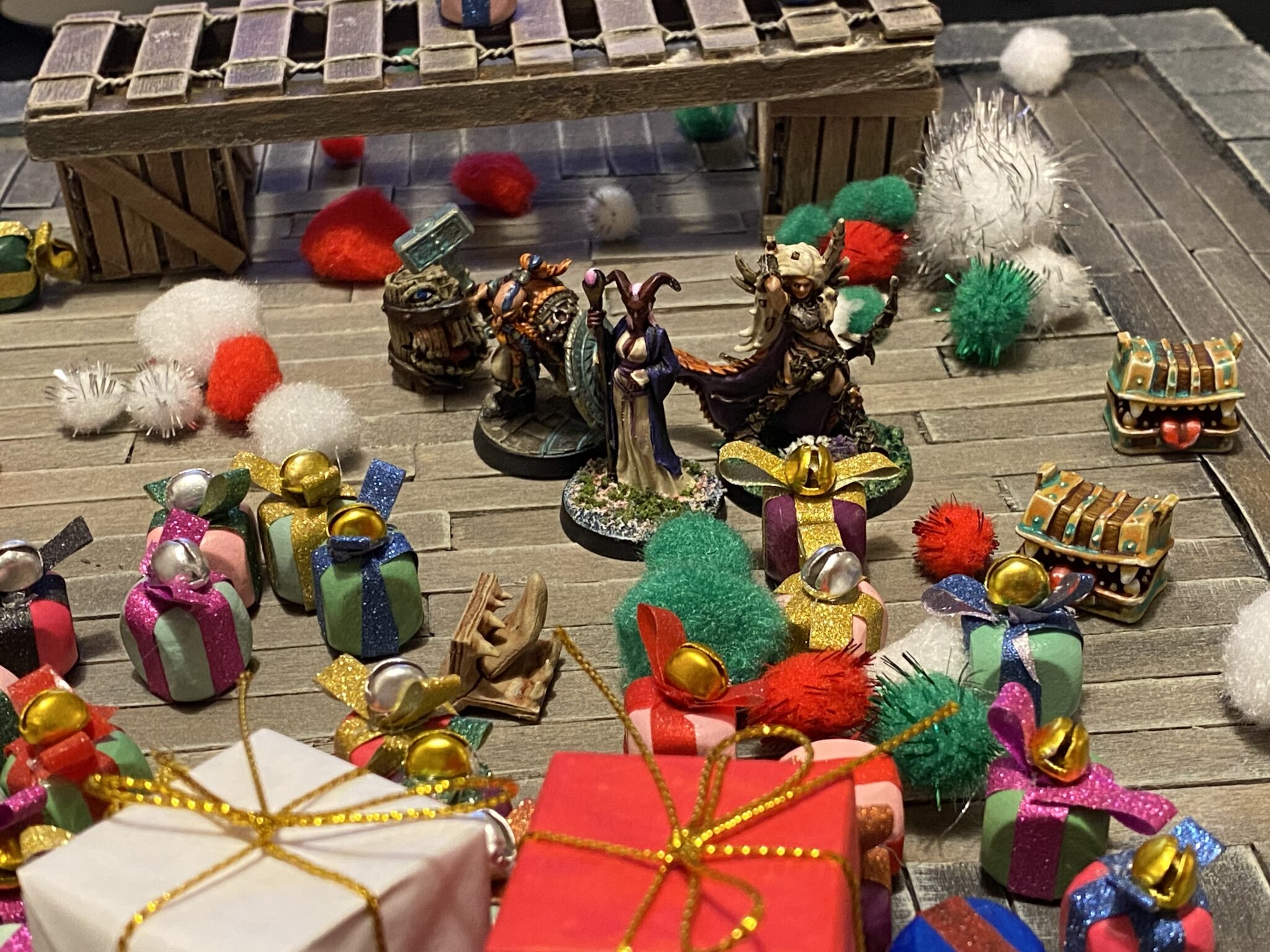 One by one the presents turned into little vicious mimics and seeing a way out, the heroes ran for the staircase up to the first floor. 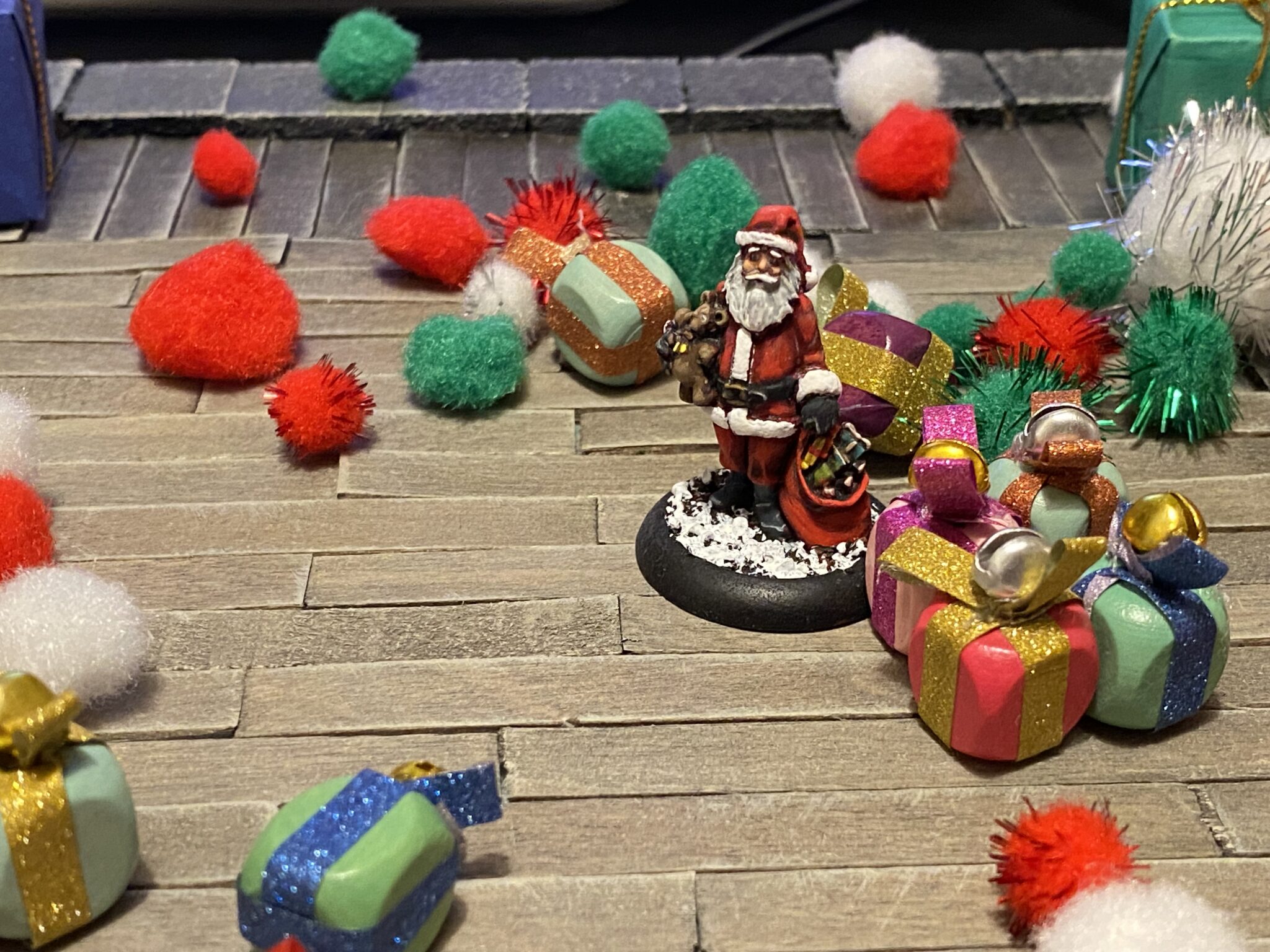 Upstairs the Hell Benders faced Father Winter. He tired… begged… our heroes to leave, but too late. 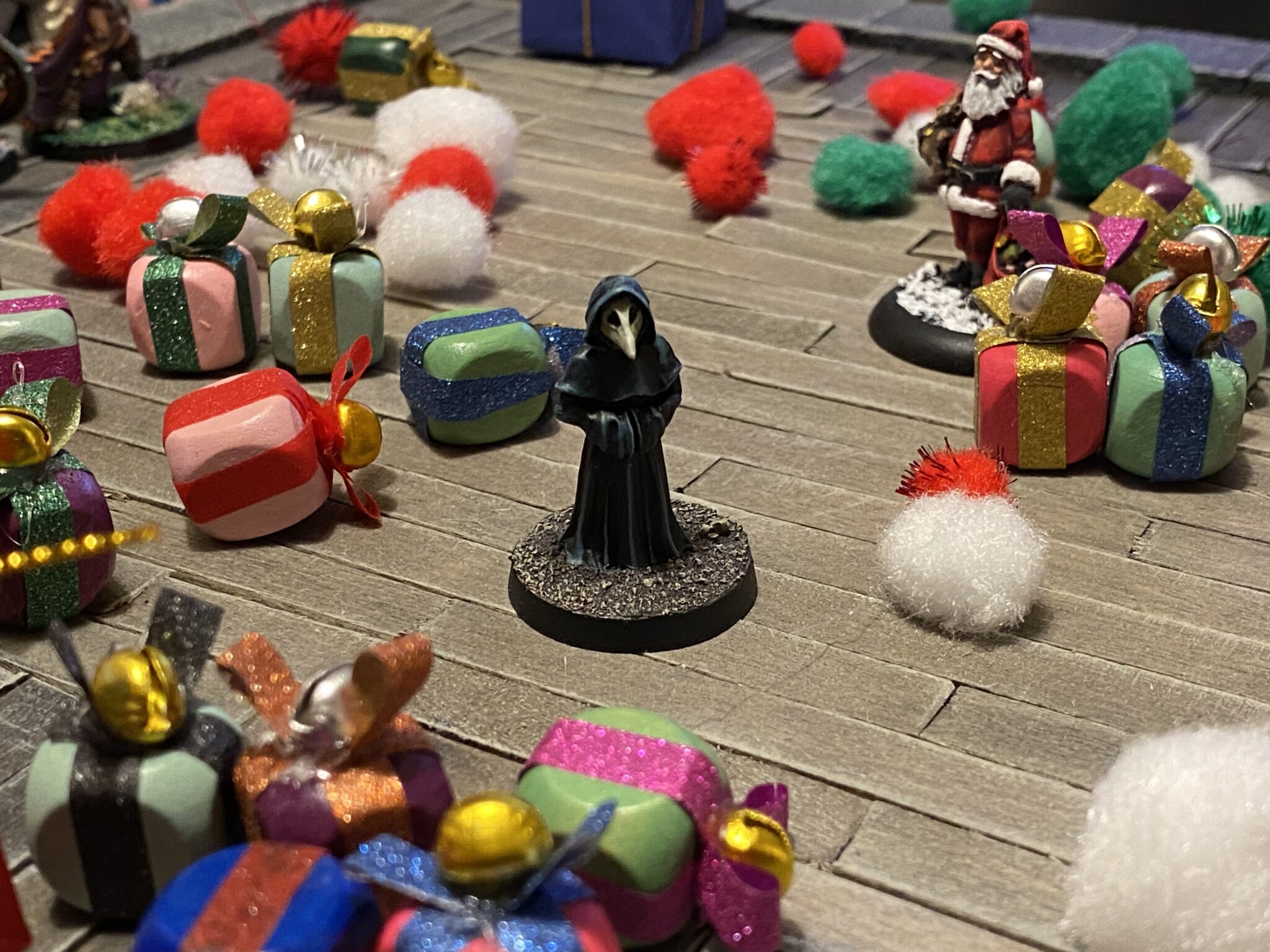 The cloaked figure appeared and our heroes immediately attacked while Father Winter tried to intervene shouting “Please don’t. He has my wife”. 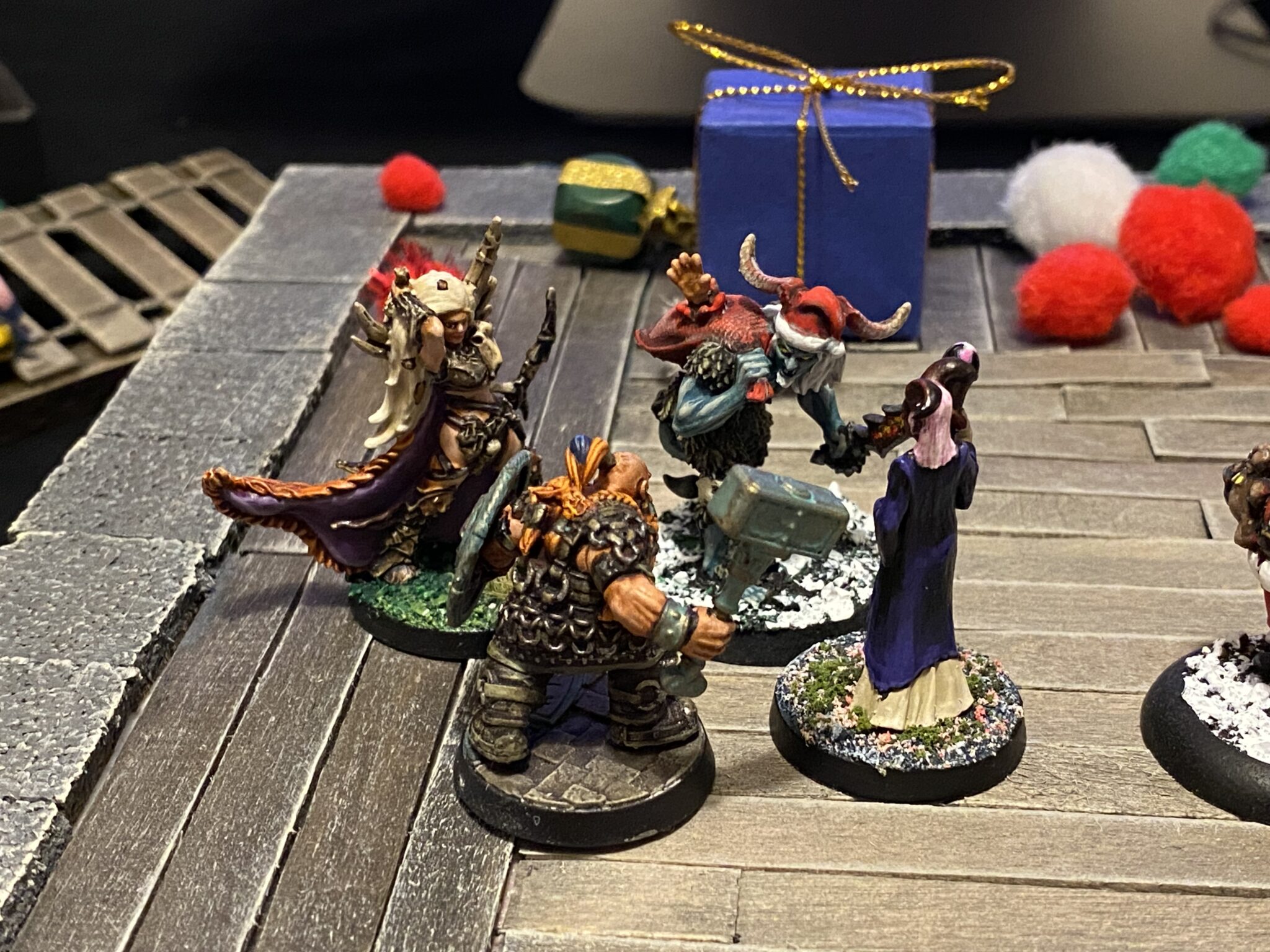 However, the party kept attacking and Father Winter could not intervene in all blows.

The cloaked figure threw off the cloaked revealing none other than the evil fiend, Krampus, who proved a mighty foe, stunning Thorga with his bell and tried (but failed) to pull heroes into his sack.

Hurt badly, Krampus teleported away from the immediate battle, pulled out a snow globe and threathened to break it unless Father Winter could stop the onslaught.

The snow globe had Mrs Winter inside! 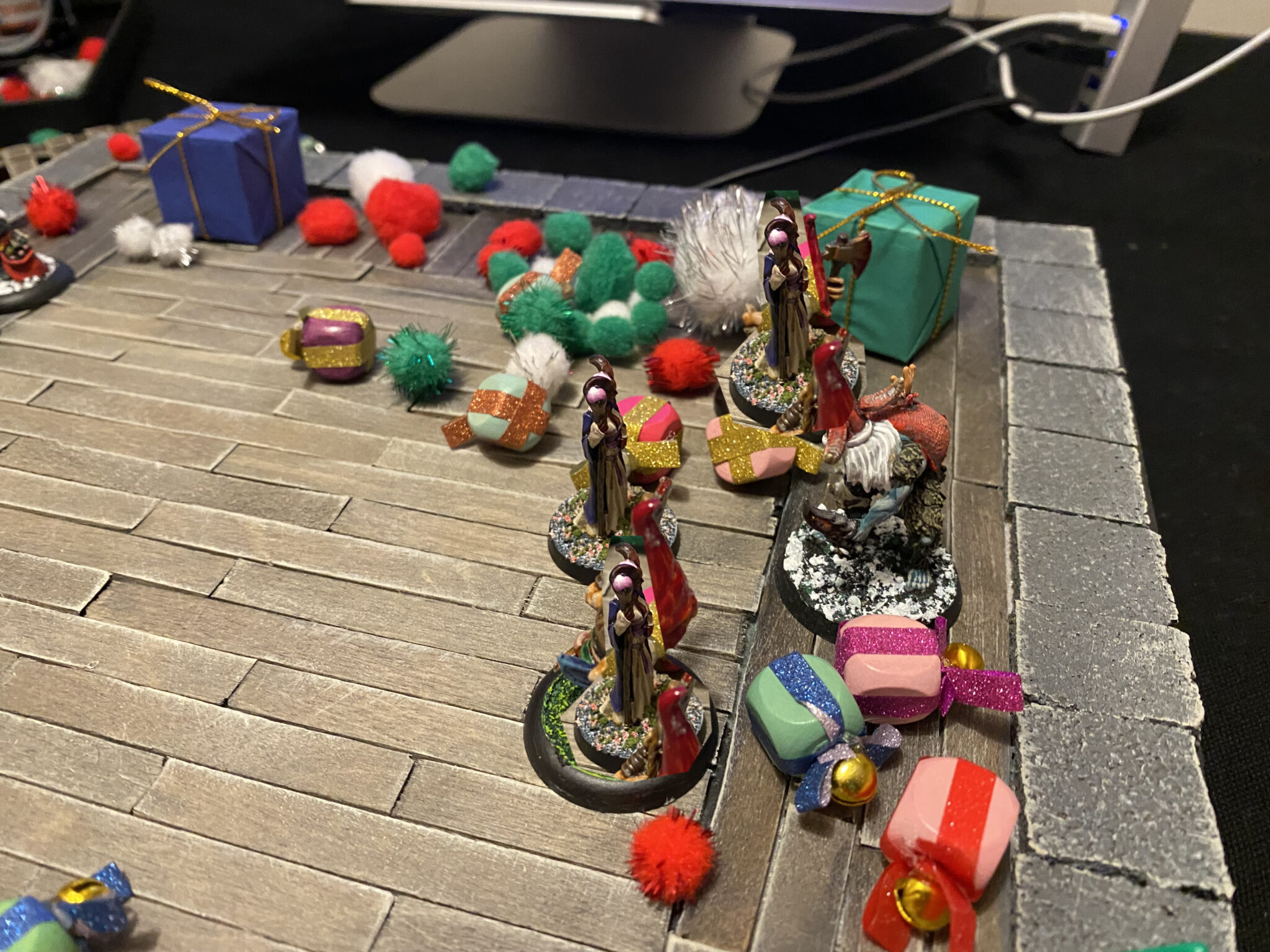 Seipora hurriedly cast Mirror Image and together with her mirrors, she approached Krampus running around him to confuse him. 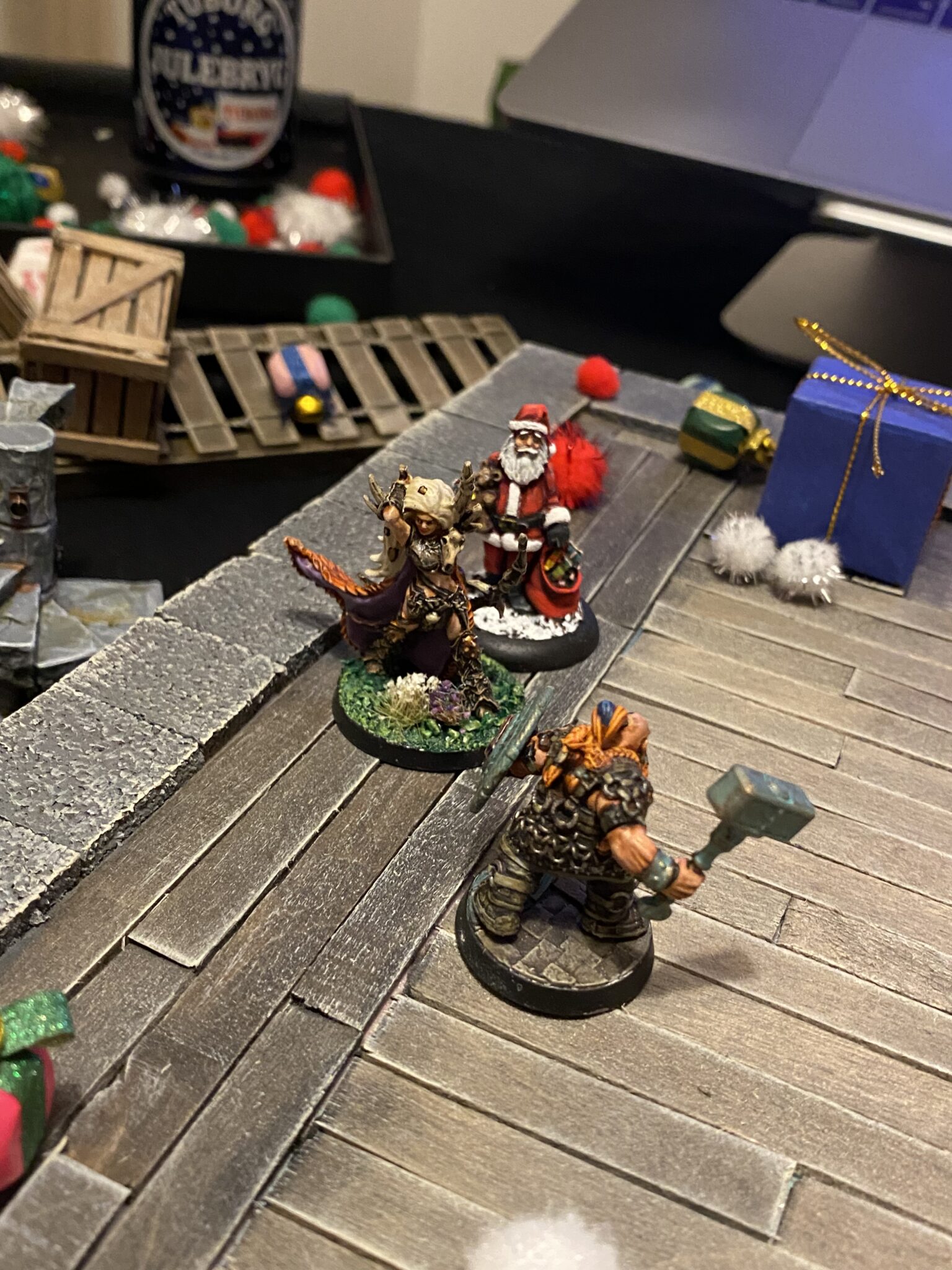 Thorga rushed to Krampus to try and steal the snow globe but failed.

In the meantime, Father Winter successfully pulled Kaari into his sack. 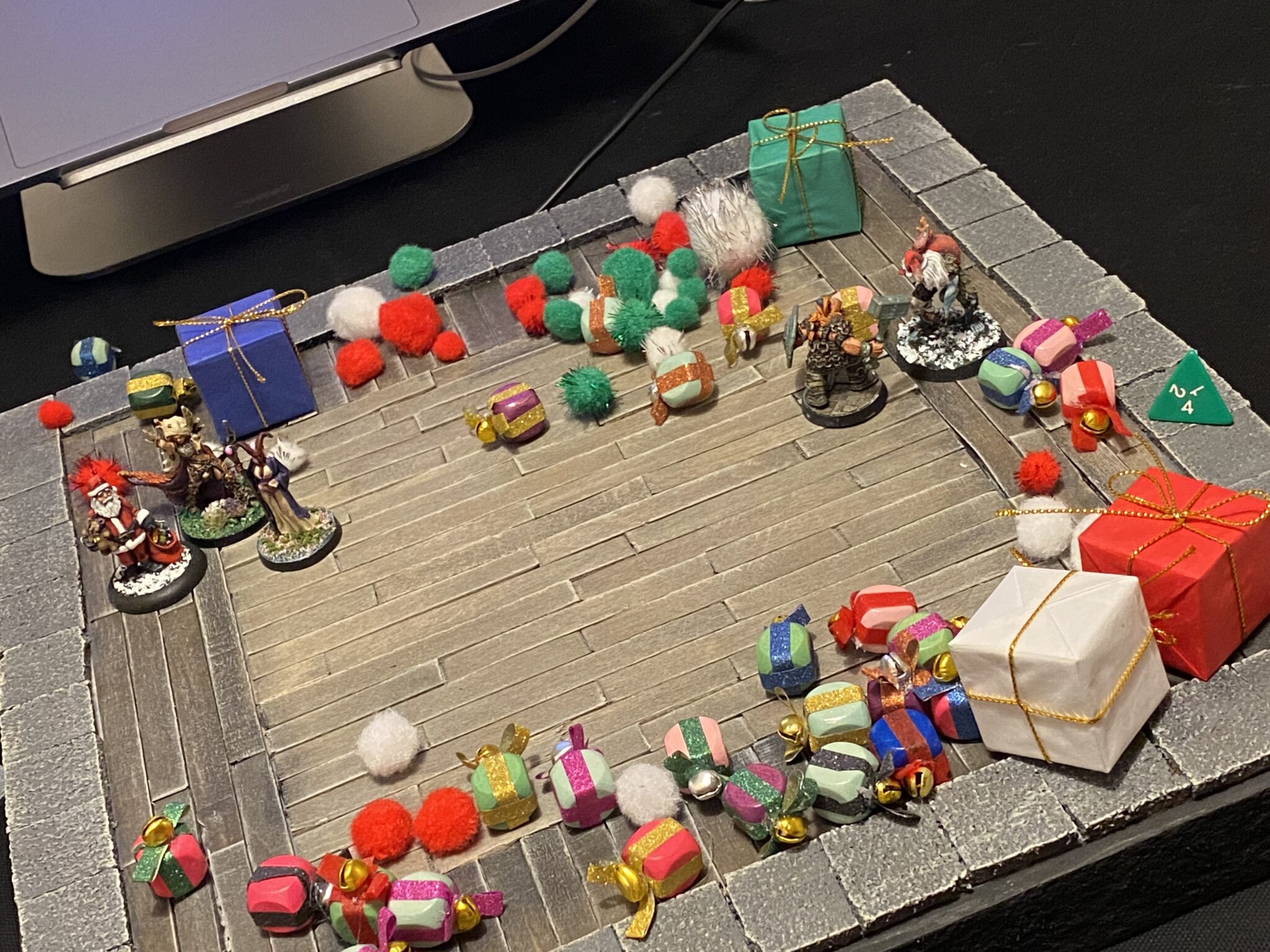 Seipora now saw her moment and snatched the snow globe from Krampus and ran back to Father Winter to give it to him. Now free from worry, Father Winter released Kaari back into the room. 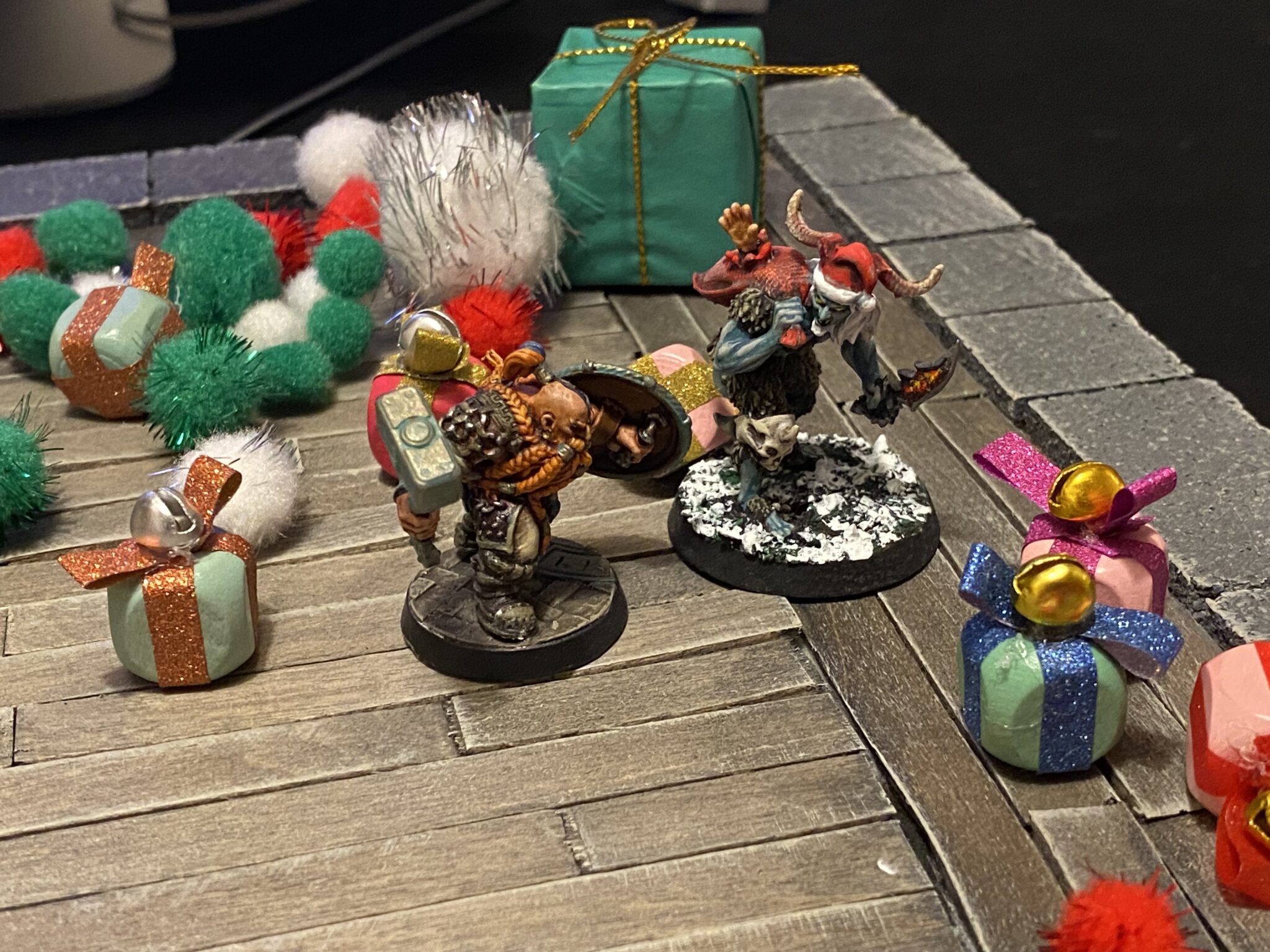 However, Thorga was not done with Krampus.

The Dwarven Paladin tried to grab Krampus to teleport down to the ground floor that was left infested with vicious little Mimics.

But in the last split second, Krampus wrestled free and Thorga found himself on the ground floor where hordes of Mimics now slowly moved closer…

Upstairs, Krampus faced the reality that he had lost and teleported away.

Exhausted from the fight, our heroes sighed a breathe of relief.

But with their guards down, the mosquito stung Seipora again (and again with a Nat20) causing another 2 damage.. enough to being the expeirenced Tiefling Sorcerer down, before flying out the window giggling satisfied.

She was quickly stabilised back to consciousness to celebrate the victory.

Father Winter and his Winter Gnomes promised to help the Dwarves rebuild Wildgate and its defences and stay and ensure now more trolls would enter Mountainhold from this direction.

He also gave Winter’s Blessing to our heroes. What that means, we will discover next year when we continue our campaign.