On their way to Twobridges, the three adventures, the “Internationals” stopped at small farmer settlement just North West of Twobridges.

Here they spent a few days recharging the “Long Road Tavern“, but one day a distraught young man came in alerting the farmers that an old lady had been mauled to death.

The area had had problems with a beast of sorts attacking livestock but this was the first time it had attacked a person.

The suspicion quickly fell on the local oddball, the woodsman Sheamus Redleaf who the locals claimed to have seen change into beastly shapes.

Soon the discussion pointed to Sheamus potentially being a Werewolf and the heroes were asked to investigate.

However, as the heroes discussed the situation with the Innkeeper and local appointed leader, Hogar Moltenguard, it became clear the party was ill equipped to fight a Werewolf should the rumours be true.

Hogar, not believing that Sheamus was a Werewolf, but at the same time also wanted to keep the heroes safe, had the local priestess tell the heroes the rumoured weapons chamber in a tomb in the the mountains. This was the resting place of Duke Isenbrand Cronenmann, a legendary hero who fought and slayed numerous foes before dying of old age. Rumour has it that the duke was buried with all his weapons, but nobody ever goes to the Tomb as it is thought to be haunted.

The heroes arrived at the Tomb and ventured inside. They quickly got a scare, but it was not of any ghosts. It was just a swarm of bats they quickly dispatched off.

Inside the tomb they found the grave guarded by four long-dead guards with a statue of the Duke with the following inscription:

Here lies Duke Isenbrand Cronenmann the All Foe Slayer.
He in fairness believed.
Don’t follow greed.
Take only what thy need.

The heroes, eager to find the legendary weapons decided to open the grave, but having found traces of a magical trap and necromancy on the grave and the dead guards, they worried opening the grave would cause the dead guards to come to life.

As a precaution, Torgga the Paladin, suggested removing the dead guards’ weapons.

This turned out to be a wise precaution as the skeletons indeed did attack when the party opened the grave and even without their weapons, they proved a challenge for the party. 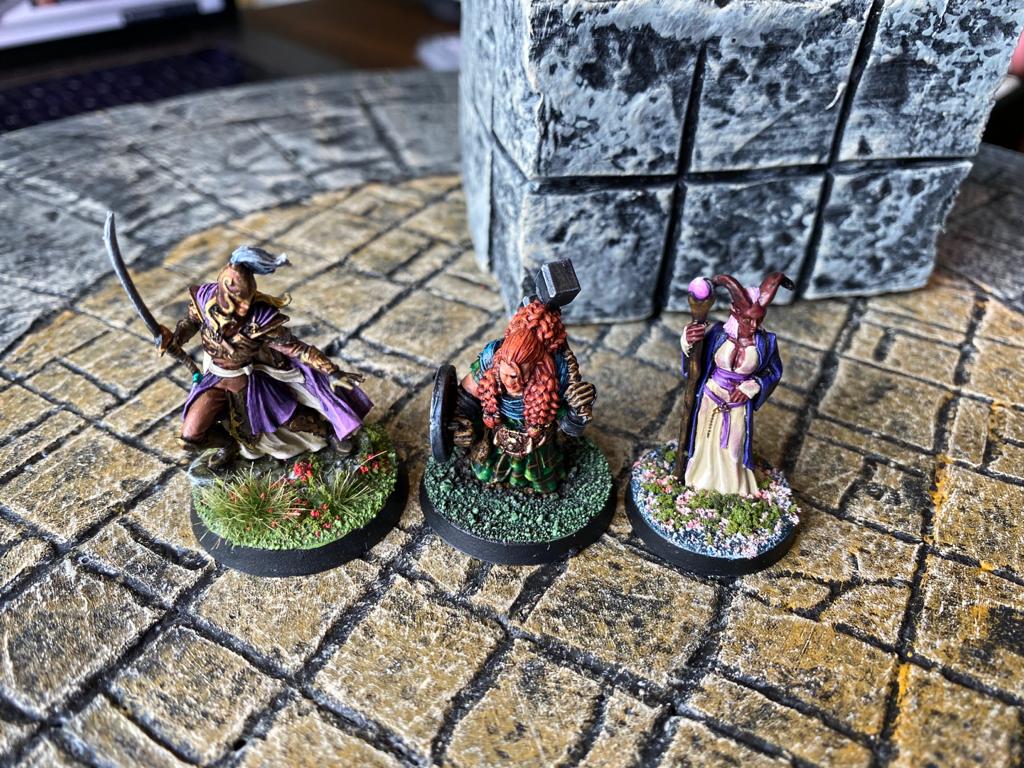 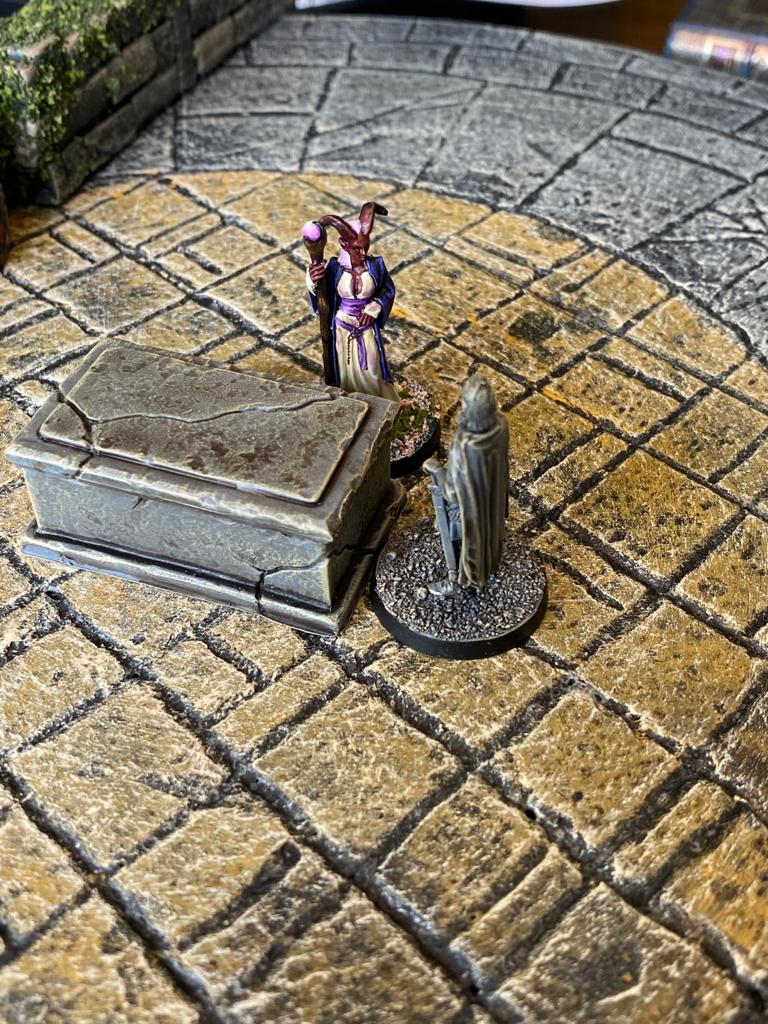 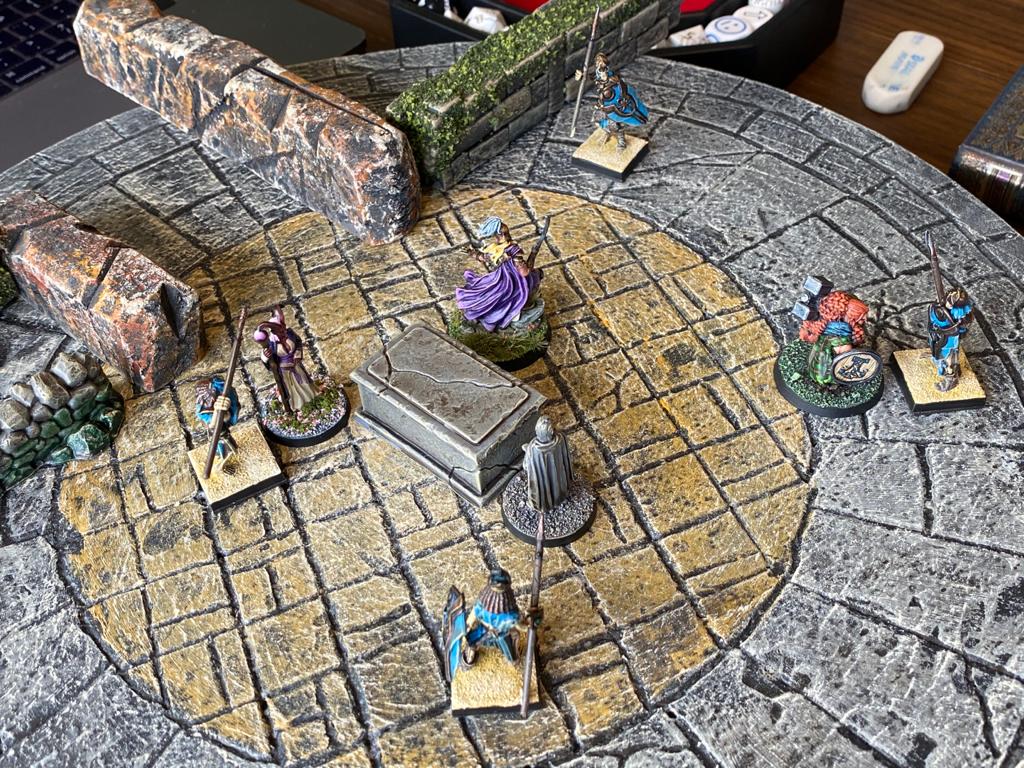 Having destroyed the undead, the heroes looked in the grave and while they didn’t find any weapons, they did find a handle opening a secret door to a magnificent hidden room full of all types of weapons all silvered!

Heading the warning on the inscription, the heroes each took only a single weapon of the racks. Torgga did consider also grabbing a couple of hand axes, but on second thought she decided to settle fo the mighty silvered warhammer she had found.

The next day our heroes visited Sheamus’ house in the forest. Not really prepared to fight him without evidence he really was a werewolf, Aerendyl decided to talk to him first.

Sheamus turned out to be a big, unpleasant man. Nevertheless the news of the beast now attacking the farmers did shock him and he told the heroes that some unknown creature had prowled the forest and its tracks led to a farm owned by Mute Mardigan, a harmless mute farmer who had a habit of taking in stray animals.

The heroes also put two and two together through the very fruitful conversation and realised Sheamus was a Shapeshifter hence the rumours about him. 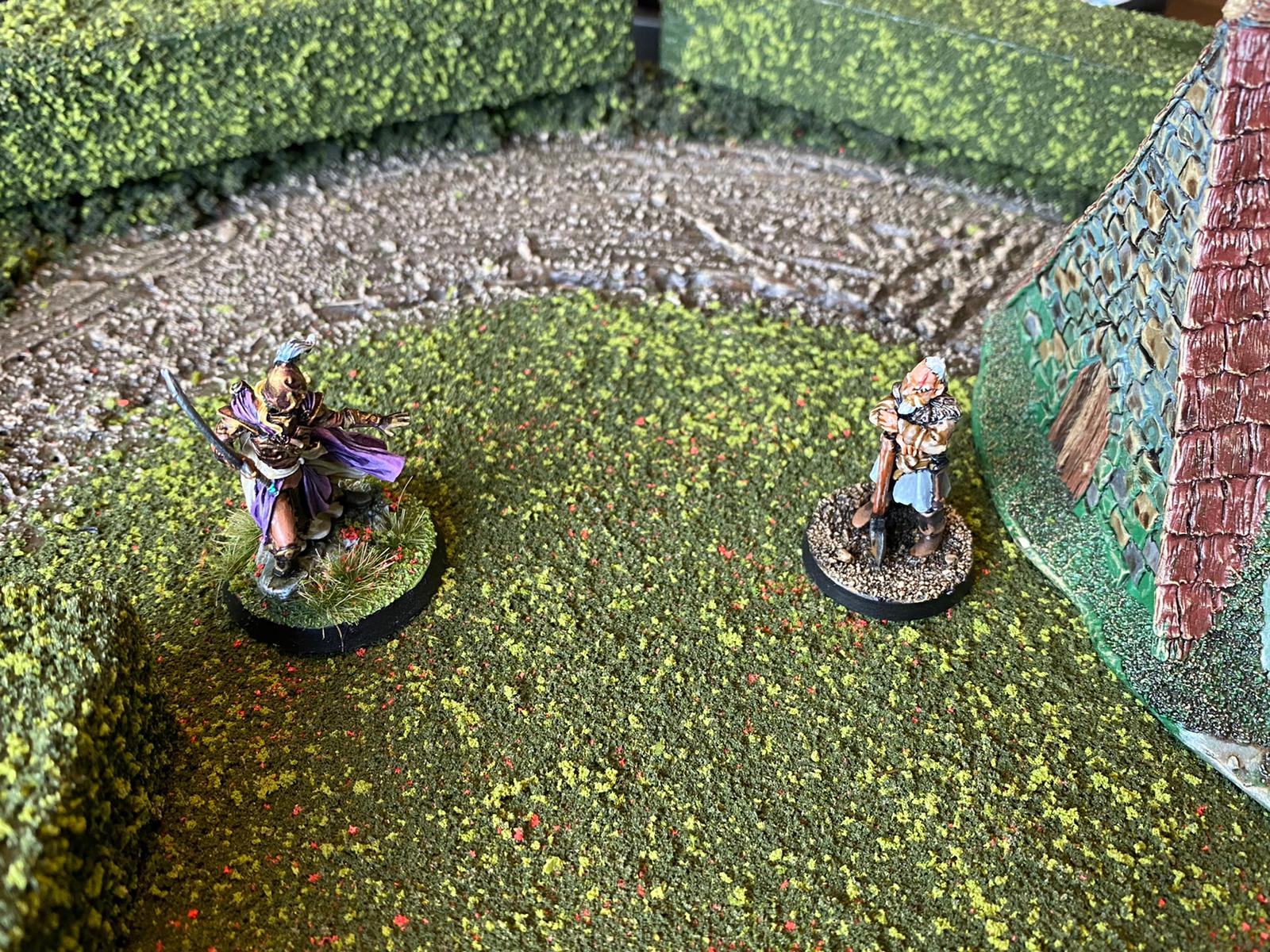 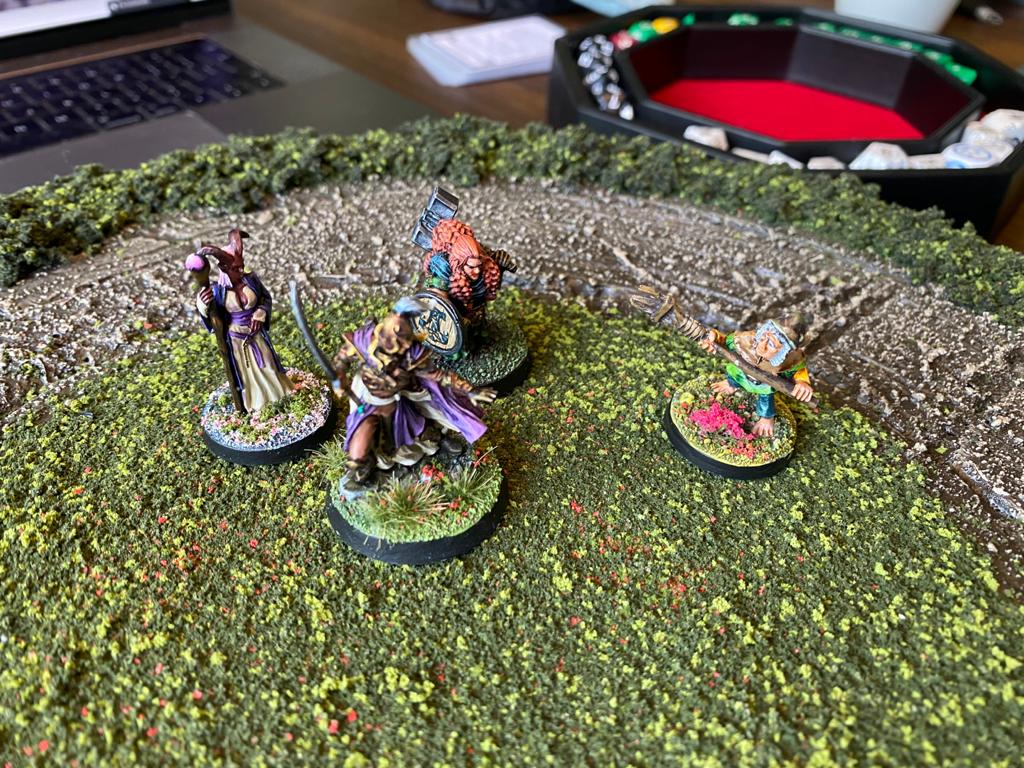 Our heroes were met by Mardigan at his farm and while he was kind and smiley, they were unable to get invited to his farm and they politely left only to regroup at the edge of the forest out of sight.

It didn’t take long before they heard aggressive growls from the barn and expertly they snuck up to the barn and entered only to find an angry Owlbear attacking them. This was clearly the beast that had been causing carnage around the area.

Although the fight was brutal, the heroes emerged victorious… although bloodied and worn out.

Mute Mardigan arrived shocked at the death of the Owlbear, but later on the rest of the farmers would scold him for taking such a dangerous beast in. 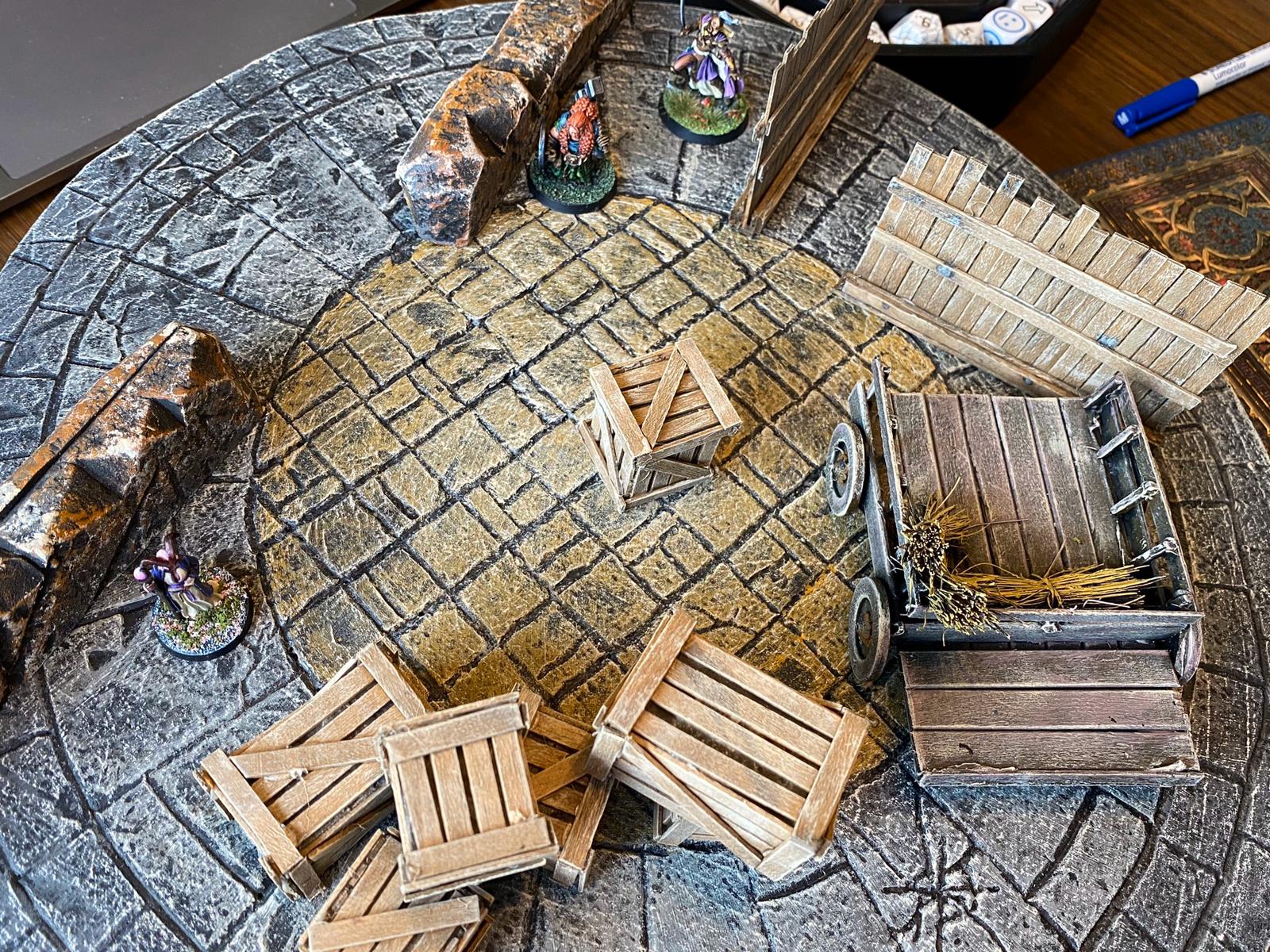 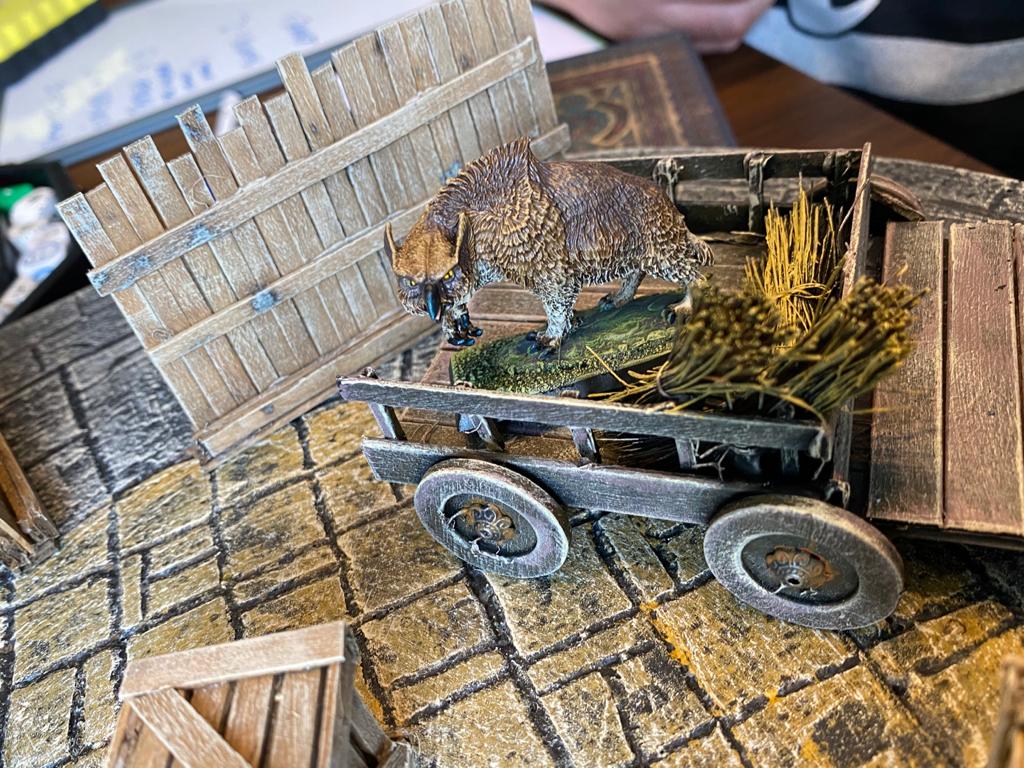 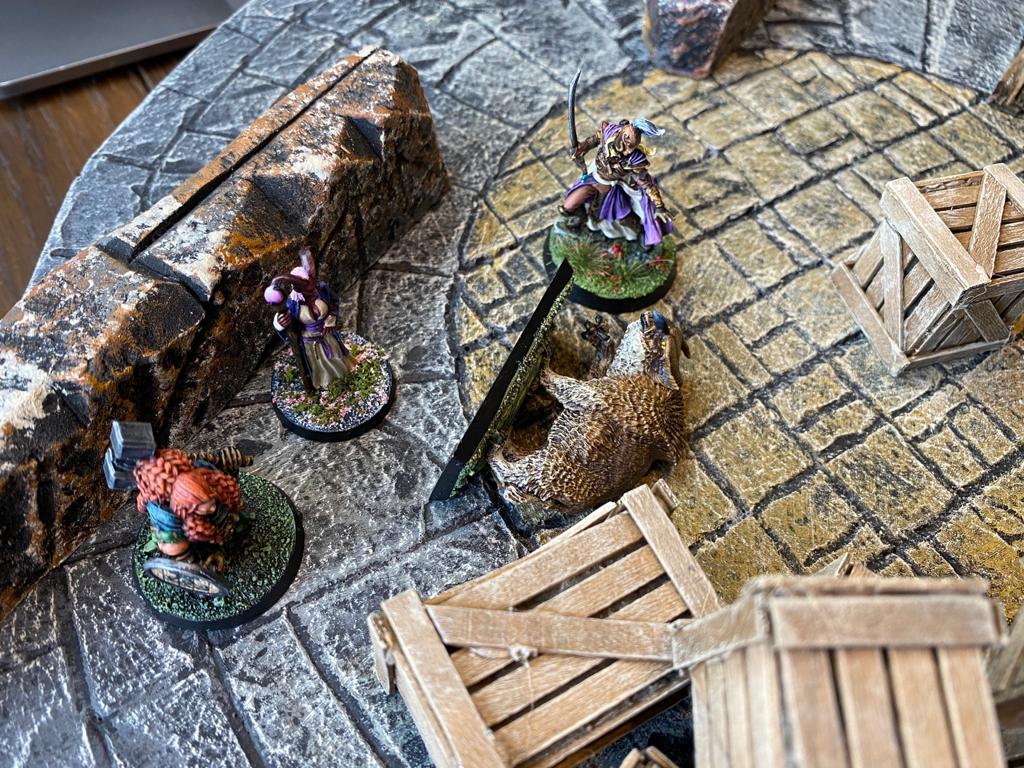