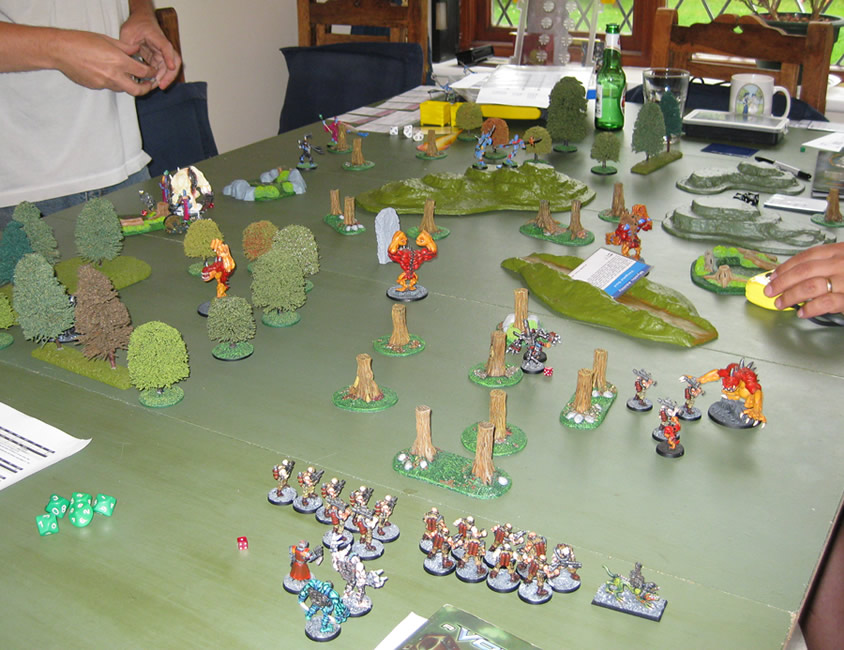 Give the Kommander a Kalashnikov to symbolise this line of thought

Not many yet, since I have only play one game so far with him. Suffice to say giving him a Kalashnikov was a good idea!

Remember that the Officers’ best ranged weapon is the Rad Hounds.

To be perfectly honost I think the Neo Soviet Officers are lacking decent firepower, a Venger would be fine or even an assault rifle. I hardly ever shot enemies with the Viper, because at the time he is within range, he might as well go into CC.

In Close Combat the Officer can be surprisingly though even if he is only armed with the Viper but giving the officer the Hammer and Sickle makes him.her a fearsome close combat opponent.

Arming the officer with a Toxic class 2 grenade is good for a nasty surprise. The Toxic Class 2 has gives 2 damage which is a good thing against multiple wounds opponents.

Make no mistake though, the Officer’s main ranged weapon is the Rad Hound. An Officer is harder to kill than your averange beast handler because of the extra wound and because he/she normally is always surrounded by Rad Troopers. Played it right and the Rad Hound can do even greater damage on shear fear effect.

I have not yet executed a Rad Trooper where I can say “wow, that made a difference!”. But on the other hand I don’t feel I have wasted a shot yet on the execution, it ussually pays of… a little anyway.

Always give Rad Troopers Bayonets. It is worth it if they get there!

I am probably getting myself into trouble saying this (I did last time) but I am not too impressed with my Rad Troopers performance so far against shooting enemies. They tend to die before killing anyone or even perform as a human shield for better troops.

Well as you can see I have had to cross out some of my previous thoughts on Rad Troopers after GGUK01. They were good. And the SMG armed guys were the best, with 3 shots a turn you are bound to hurt somebody. Looking back I would have prefer all my Rad Troopers to have SMGs instead of Assault Rifles.

Don’t use Rad Troopers as screens, they will die and they can actually inflict a large amount of damage if you take care of them.

Rad Troopers can be quite effective against big things as well simply ganging up against them. My Troopers have managed to kill off a Razorback Chieftain (See the battle Report here), but also don’t be scared to shoot at big things. One Rad trooper (the only one out of 7 able to shoot that turn) shoot once against an Ares with 1 wound left, killing it!

Always give Rad Troopers Bayonets. It is worth it if they get there!

The wolverine heavy machinegun is a must. If you don’t want to convert one, use a proxy I don’t care just as long as you bring one!

What can I say? Vanguards are the best troops in the army! They stand against any enemy and have always killed more than what they cost.

Esspecially the Wolverine Heavy Machine Gun is worth its cost. But the powerful Venger Riffle is definetly good as well. In the first 1000 point game I ever played a Vanguard with a venger shot at a custom walker, wounded it and made it explode (a bit lucky roll on the internal damage chart). It shows that the Venger is to be taken seriously.

I normally give my Vanguards Bayonets but so far they haven’t been involved in CC that much and I don’t see them as CC troops. Not that they couldn’t perform as such they just do more damage shooting. So my advice is get them behind some cover and stay there for the rest of the battle. Don’t get scared of the -2 to hit on long range. It could lure you to close in on the enemy and get killed so let the enemy come if posible.

Adding Rad grenades to the unit makes them more dangerous in closer range as well, but if you want to save points then give Rad Grenades and Bayonets to your Rad Troppers.

Played right these guys are deadly, played wrong they are still deadly but it will be against your own troops.

One advice after GGUK01: remember the template is 8″ long, think of it as an ordinary weapon. It helps me making sure they are within distance. And boy oh boy, are they effective against Shard.

After a massive charge by my opponent’s close combat troops during this weekend’s battles (16/06-01) I have found a very useful tactic with chemgrunts. It is a bit dodgy so you have to be a real Neo Soviet player (with NO concern for your troops whatsoEVER) to use this tactic but it worked for me the first time although I was charged and not the other way around.

Here goes: There are three problems with chemgrunts:
1: They have a very short range (and slow since it costs MPC: 5 to fire the damn weapon) 2: They are very easy to kill 3: If a chemgrunt is hit and blows up it will blow up 3″ which means the other grunts cannot be kept on a safe distance (3″ coherensy) making the unit even more vulnerable.

But who say you have to shoot with your chemgrunts?? No, what you want to do is this: You charge your chemgrunts into close combat. Maybe they hit or even kill but that is not the plan. When it is your next activation you shoot into that close combat with a Grenade Launcher (Kalashnikov). Target it so you hit all three chemgrunts.

Now they should all die BUT there is 1/5 chance of each of them exploding. And if one explode the blast will hit the other two, hopefully making them blow up as well.

Now Chemgrunts will blow up with a 3″ blast, so imagine a pack of growlers standing to close…. hmmmm!

Sure you loose your chemgrunts but think of them as a very effective version of a rad hound.

Cyclops adds a lot of flexibility to your army.
If you don’t know what army you are to face bring cyclops they’ll do good against almost everything

In my eyes Cyclops are the most flexible of my troops. Although my prize for best troop type goes to Vanguards for their awesome killing ability, Cyclops are more flexible and can fullfill roles as both CC types and RC types and cleaners with the new rules for their Eye Blast (see the Razorfang’s Exodus book)

Cyclops ARE slow with 9 MP, so you have to decide to either move or shot, you can still move a little when shooting, but I’ll rather spend those extra 3 MP to aim the shot. They are also surprisingly vulnerable to shooting but if you are a bit careful they should be alright. Against Growlers they are a must with their big nasty claw and esppecially with their eye beam (AM:-4).

If you want a Typhoon go for the Mortar version, the Chaingun version is too short ranged.

The first Typhoon I made was with a Chaingun, big mistake! That weapon is too short ranged for a vulnerable vehicle like this.

If you want to go Typhoon you have to go Mortar.

The Mortar has the range, it has the power and it has the template. Furthermore it can fire indirect (without the normal -1 to hit) so you can place it hidding behind things and let other troops do the spotting for it. But remember indirect fire can only be used up to medium range.

It is often better to place the Typhoon behind a building, using 4″ to move it out so it has line of sight, shoot and then move it back in.

Also remember that you can still move the typhoon eventhough it cannot shoot. Use these turn to get it into position, normally away from the enemy because if you move it out of 30″ you get +2 to hit and you are well out of range of most enenmy fire.

Since the Mortar have a 2″ blast template it is tempting to shoot at the big group of miniatures, but big groups of grunts are normally the weakest so they are actually not worth it.

Instead think of the Mortar as a sniper to take out the tough guys, like Soulless, Striders, Ares etc.