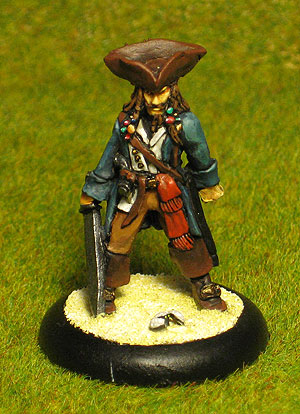 Pirates – Scum of the Sea

I have bought a lot of pirate miniatures at the last two Salute shows so No Quarter is the natual driver for combining these figures in to practical use.

While I want a live pirate army, I got almost as many undead pirates so I want to make use of them as well.

I have not create the army list yet, but here are some random thoughts and notes:

I want to use both live pirates and undead pirates in my No Quarter pirate army with the live ones becoming undeads when killed (yep, tough pirates).

So the obvious choice of colour is to paint the live pirates in fresh bright colours with old Burt Lancaster pirate movies as reference.

To keep the undead pirates visually different I am painting those in muddy browns and greens following the more recent Pirates of the Caribbean movies.