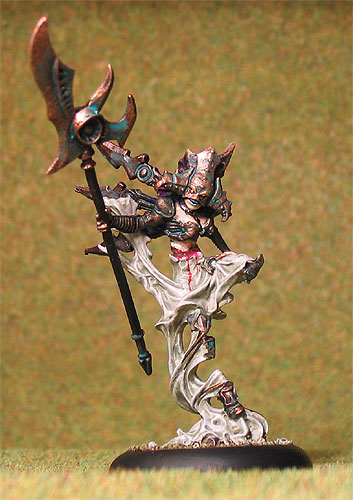 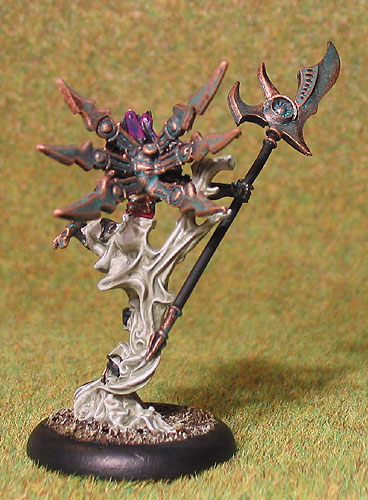 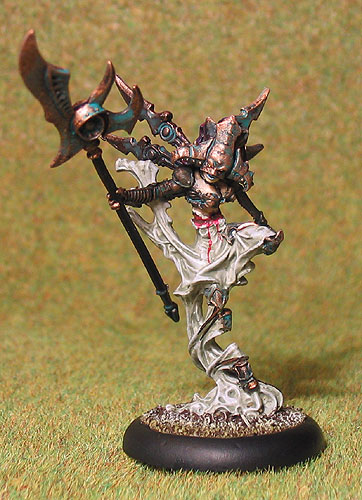 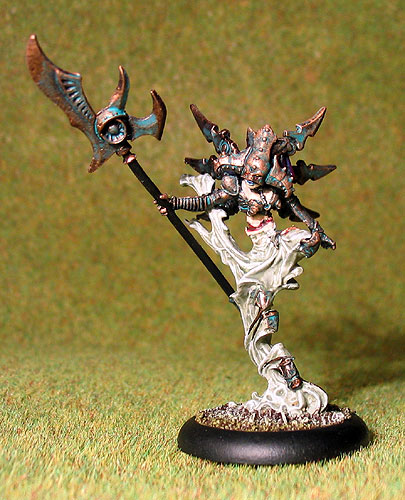 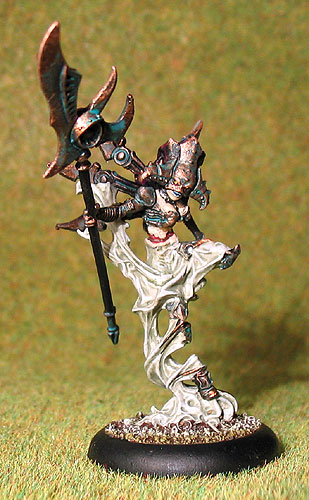 Following my Epic Denny post on PP forum it seemd to be unaminously agreed that blood should not run down on the incorporeal bit of Deneghra, so I have repainted this as show on the last two photos above.

Right, Wraithwitch Deneghra…. hmmm… I will be the first to admit I am a Denny fanboy all the way. I bought the Cryx starter set even before Prime was published and have played Deneghra ever since.

Sure I bought Iron Liche, even painted him recently. Also got Skarre… not painted yet. And yes, I did buy Goreshade and played a couple of times with him… never got around to buy any of the Apothesis casters though because by then I have given in to the fact that Deneghra was going to be my main warcaster forever.

So when I heard she was going to go epic I was naturally pleased. The the Apothesis miniatures came out. The Harbinger was stunning, Terminus and Karchev were awesome, even Denny’s goody-girly sister Haley got a brilliant figure (no pun intended).

But the Epic Deneghra miniature was a big disappointment to me and the first time I really disliked a Privateer Press miniature apart from original Vlad but he was universally hated so he doesn’t count.

For a character which such great fluff and who have now become part-time incorporeal I felt the miniatures was static to the point of having the weight of stone. While this works great for a character like Kommander Irusk, this does not fit the incorporeal (and stealthy) history of Deneghra.

I basically set out to make my own Deneghra and started looking for possible miniatures to convert her with. I looked at the Pistol Wraiths but already having two I thought three with capes flying in the same fashion was pushing it. Not with Superiority out I would have chosen the Bane Lord, but he wasn’t out back then so I ended up looking towards Confrontation and found several suitable miniatures.

In the end I chose a Equanimous Warrior who although male, was most suited since his waist was free to be cut in half.

I then proceeded cutting my Epic Denny miniature in half, true to her fluff, had put the two together and I am very pleased with the result. This is what Wraithwitch Deneghra should look like!

I have never used washes much, in fact I have only started playing around with the technique in recent years.

Epic Denghra is the first mini where washes is the main technique used because with all the shapes, crevasses and bits the mini seems ideal for the technique.

I normally paint bronze by highlighting it with bone mixed with bronze (see Goreshade), but in this case I painted all metal bits with Magic Metal from Coat D’arms (it is a very dark warm metal colour).

Then I very finely drybrushed bronze on it again and again untill I was happy.

Then I washed with a mixture of dark green mixed with Vallejo glaze.

Finally I just touched up some of the bronze and that was it.

Similary the cloak was painted Coat D’arms Horse Grey and then given a wash of Coat D’arms Dark Olive mixed with Vallejo Glaze and finally highlight with Horse Grey.