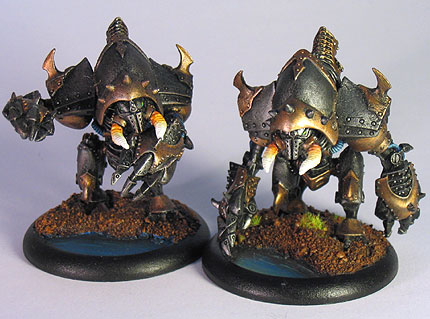 After the Deathripper Prototype I decided to paint my jacks completely metal!

Why completely metal? well, Necrotechs builds the Warjacks out of dead men/ animals and raw machinery/ metal by magically fusing them. I don’t think they care for painting them.

So I decided to go the easy way and drybrush the lot! It took me less time to paint the first 2 Bonejacks and the first Slayer than painting the prototype.

Later additions like Skarlock and wraiths provide an individual feel to the army since these solos are rather unique both in game style and the minis themselves.

Another colourfull addition will be the Revenant Crew with their colourful pirate outfits – AAaaaarrrrrr!