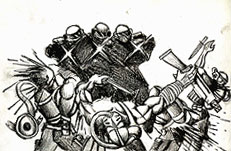 So this is where it all starts! I have been invited to kick Union’s ass, more specifically Mocaiv’s Union’s Ass.

As the game came close it was clear to me that BootCamp was turning up as well with the Growlers.

Below are some of my comments and thoughts on these games.

Let me first run through the armies:

First fight was between Neo Soviet and Growlers

It suddenly became very clear to me that the description of Growlers being oversized Genestealers was NOT true. Seeing those minis in real life was not funny, esspecially since there where a lot of them.

The game was well balanced and As you can see from my drawing the last fight was between the Growler Chieftain and The Vanguards. It took the Vanguards three turns of shooting to bring that creature down, BUT I fired my Vengers as Strength 4 they have Strength 5 but I didn’t realize this before the Chieftain was dead.

So the Growler Chieftains can be brought down with the shear amount of firepower.

The Vanguards did good in the game, but the two cyclops did good as well. They held up Bulls and the Chieftain for short period of time. Enough to get my other troops in better positions.

The cyclops are vunerable to fire due to the AR of 2 but against Growlers they are a MUST, esspecially because they can actually survive Close Combat with Growlers.

Second fight was between Neo Soviet and Union

10 troopers? I just kick a huge bunch of growler’s ass (narrowly but…), those Union skum posses no threat to me!

And how wrong was I? First turn was a disaster I lost all Rad Troopers except one to the brilliant shooting from the Union. My Cyclops was farely soon taken down and all in all I had troubles closing in on the Union Troopers without getting shot.

In the middle of the game it started to look better after my Wolverine HMG destroyed one of the Union Squads.

Who did good here? Hmm… Vanguards probably, but I think the other troops could have had their impact in the game if I have used the properly. Fighting Union was totally different from fighting Growlers. I suspected I had to do the charging but lacking the Growlers thick hide I should have tried to out manouver the few Unions with my Numbers.

I didn’t participate in this came so I cannot say I learned much from it. It only confirmed a couple of facts I already knew: Union has some awesome Firepower and Growlers have speed as much as the brute strength of their fists.

So what would I change if I could? I would leave the Vanguards at home! I know they took down the Chieftain, but They did it with Strength 4 the same as the Assult Rifles of the Rad Troopers.

So I would have replaced the Vanguards with Rad Troopers, one or two Cyclops more and a battle crawler to make up for the Wolverine HMG which was the single best and most destructive thing in the force.

The Rad hound didn’t do much good, but I think it was due to bad die-rolls, so I’ll keep it.