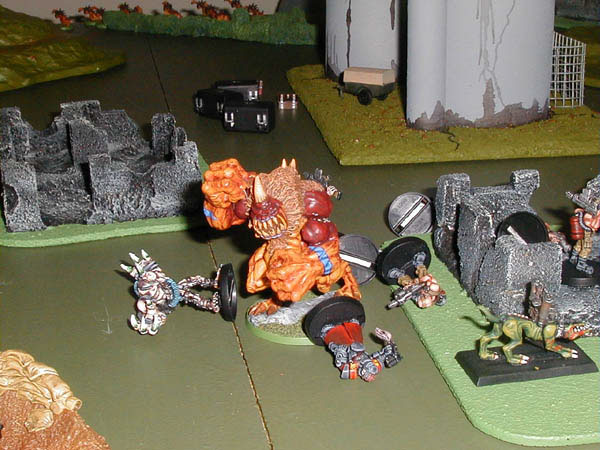 This is my first 3 person battle. Below are some of my comments and thoughts on these games.

Whoops! Forgot how many points we played: 500 points each (thanks to Techromancer for noticing this error).

Let me first run through the armies:

and find it under “Custom Forces”

English is not my native language so if you find any bad spelling mistakes the please email me to let me know, thanks.

Left is a overview of what the different symbols mean and below is a map over the battle scene and where the armies where positioned for set up. The map is ofcourse not 100% correct but I tried to make it as real as posible. If you want to see why it is not accurate the click here to see my “notes” he he.

The black lines is where the minis moved and the red lines is for shooting.

I also lost track of turns somewhere since I didn’t mark up units that didn’t move for a turn, but I know how to get around this next time.

During the battle report there will be small photos and small battle maps. To see them larger just click on them and a large image will pop up. I have done it this way for two reasones: 1) so I can show all the images for people with small screen resolutions as well 2) to make this page smaller.

I am writting the battle report as I experienced it and it might be altered by Mocaiv or Bootcamp later on.

All images where taken by Mocaiv.

The Battlefield before the war!