Having made it all the way down River Styx to Phlegethos, our heroes had spend a long and peaceful night at Hell’s Delight, the local tavern in the small harbour town Styxhaven.

In the morning, the party came down for some brunch. Scanning the tavern, they saw their enthusiastic local connection, James Brimstone waving them over. They also spotted the much less enthusiastic owner, the Succubus Penelopix Lust-Lashes, hanging half asleep/ hung over by the counter and 3 odd little angry looking men with big red hats.

A big brunch later, the heroes had gotten a bit of background information from James such as Phlegethos only really have one city: Abriymoch, a city inside a volcano that acts as both the home of the Infernal Court and the entertainment and pleasure centre of hell.

Thorga, the Dwarven Paladin decided to use his short stature to start a conversation with the 3 odd little men, soon followed by Khari, the Human Ranger who soon picked up on the fact that the three little men were not locals.

And putting 2 and 2 together the pair concluded the three little men were the dangerously evil fey called “Redcaps”.

And in the course of short conversation, the two gained the trust of the little men and were soon scheming on how to conduct highway robbery against the local diligence to Abriymoch, which apparently carried hidden stashed of Soul Coin as bribes to the Infernal Court.

The Redcaps explained they could use the extra muscle to deal with any unforeseen, and potentially dangerous, passengers in the Diligence.

Meanwhile Seipora, the Tiefling Sorcerer, decided to strike up a flirtatious conversation with the half asleep Penelopix.

(DM Note, this was a social skill challenge with 3 failures vs 5 successes needed).

Penelopix woke up to the approach and with a short elegant push with her wings, flew over the counter to sit on top of it dangerously close to Seipora.

Seipora, trying to make herself as alluring as possible, tried a bit too hard with a dagger party trick, that didn’t go as planned making her looking like an awkward teenager trying too hard to pick up a date.

As Penelopix started to lose interest (2 out of 3 failures and 4 out of 5 successes), Seipora decided that sometimes you have to roll a hard 6, grabbed Penelopix and kissed her.

This had the desired effect. Penelopix regretfully had to pull away to do her duties as the tavern owner, but promised to help the heroes.

She told Seipora about the Night Diligence and gave her a map of Phlegethos that really only had three notable locations: 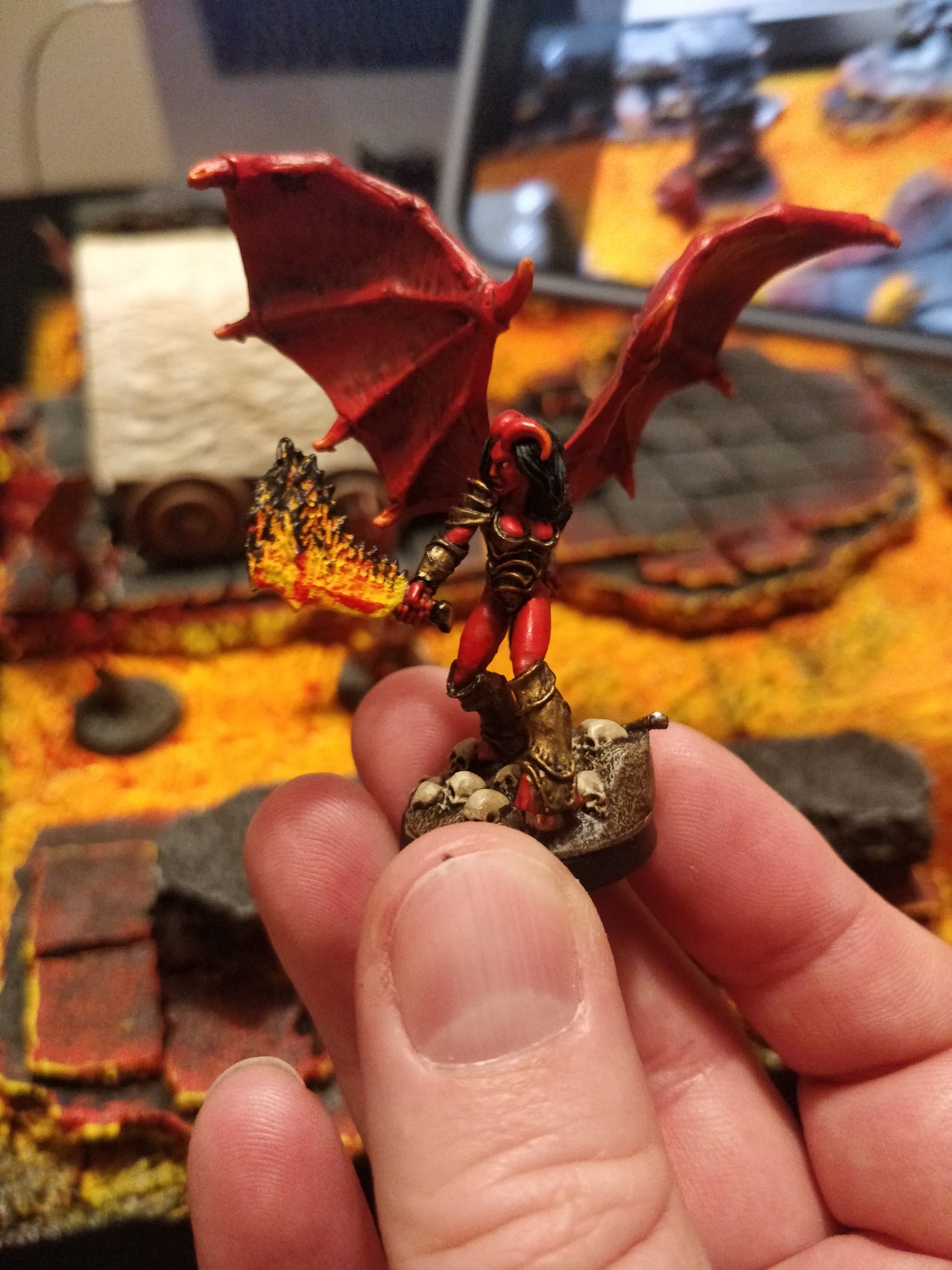 The heroes decided to take the Diligence, pulled by a Nightmare, a horse of hell.

But meeting the horse master made them feel uneasy. It was a female Wood Elf named Nemleth with a wide unnerving smile.

Feeling a bit uncomfortable with the situation, the heroes went back to Hell’s Delight to get some lunch and to ask Penelopix for info about Nemleth. She assured them that Nemleth was a local.

While Nemleth was not native to Phlegetos, she had been living there for hundreds of years after having accidentally found herself in this hellish place with no means to get back to where we was original from. Using her animal handling abilities, she had made a living for herself taming Nightmares and managing the Diligence to Abriymoch.

With that, the party left Hell’s Delight and boarded the Diligence.

The only other passenger was a cloaked man with a mask covering his face, who chose to sleep on the journey.

Just before departure, a group of Spined Devils landed on the roof to tag along for the ride.

Half a day’s travel from Styxhaven, the Diligence was forced to stop as a broken down horse carriage blocked the road with a single, small red hatted figure seemingly trying to get a wheel back on the carriage.

Nemleth having no patience with the situation started demanding clear passage. 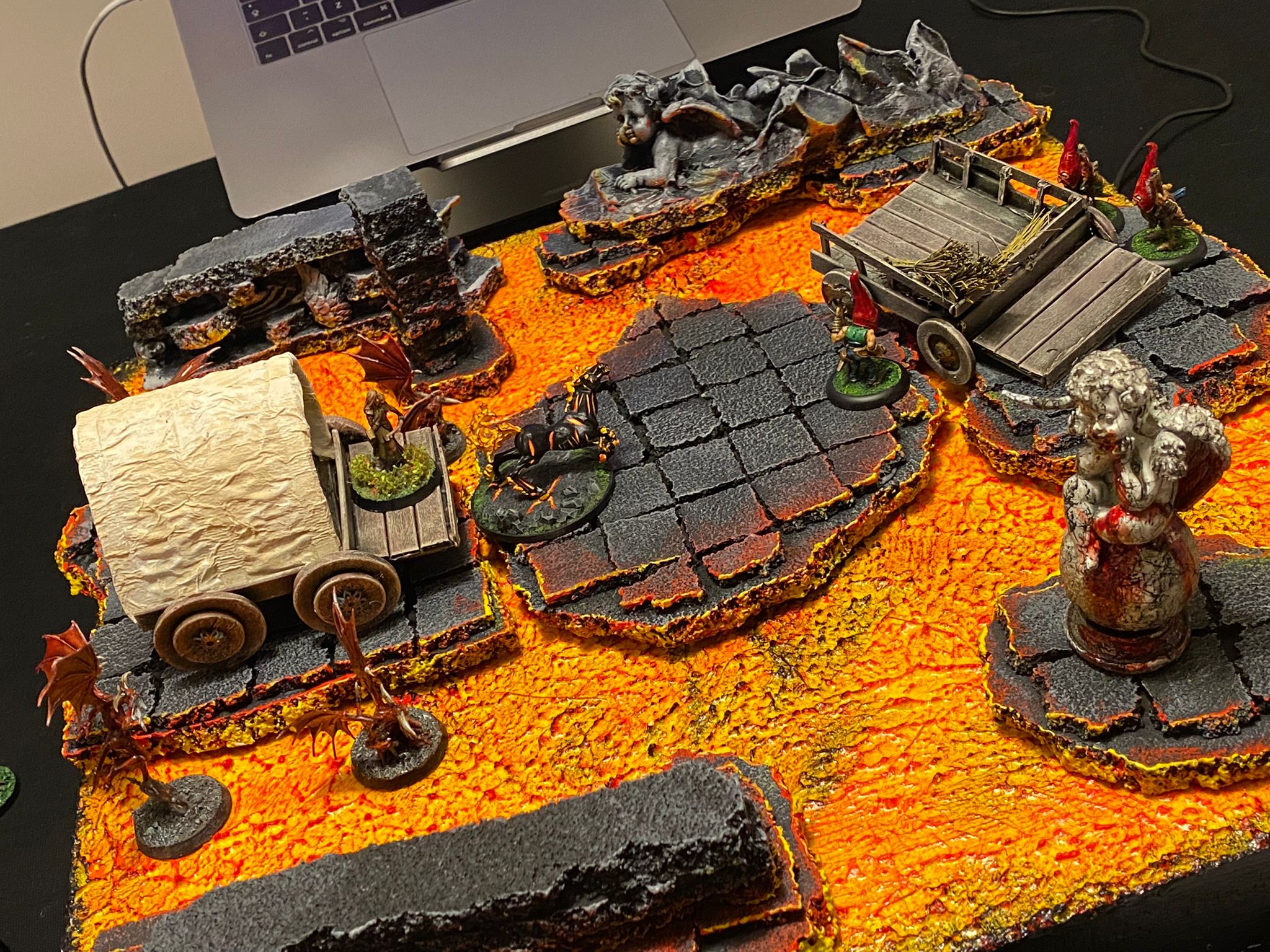 but at this point in time Thorga struck a hard blow from behind, making Nemleth use her magic to jump ahead a few meters, badly wounded she tried to free the Nightmare to escape.

And soon all hell broke out. The Spinned Devils and the Redcaps started fighting. Thorga was attacked by a Spined Devil, while Kari shot two devils.

But before Nemleth could escape, Kari killed her and as the tragic Wood Elf’s body disappeared into the lava, Kari took control of the Nightmare and mounted the hell horse! (and earning an Inspiration for the epic move).

Meanwhile the masked man snuck silently out the back to circumvent the Diligence to get to the Nightmare. But Seipora spotted this and blinded him to stall his movement.

However, the masked man was not shaken by losing his sight and managed to stab Seipora with a poisoned blade. Only by the luck of being within Thorga’s presence did Seipora succeed against the Assassin’s blade.

Quickly, the man slid under the Diligence, but Seipora used Thunderwave downwards to push him out in front of the Nightmare. 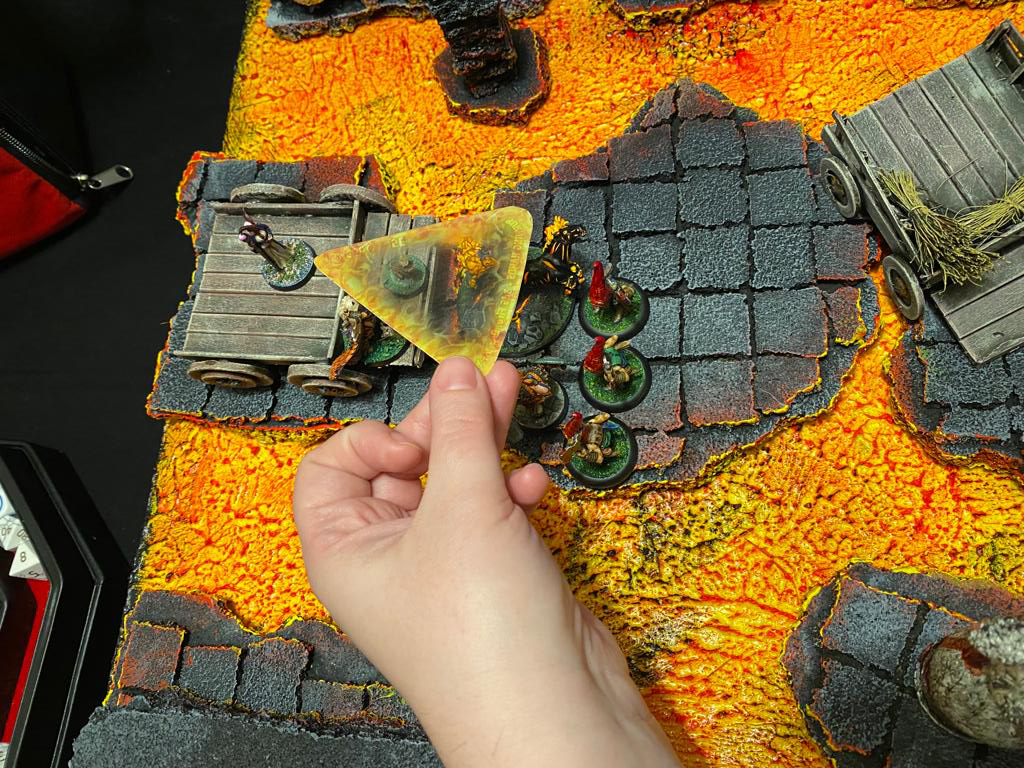 But the masked assassin had now lost his mask and his body had transformed to a ratlike being: A Wererat!

He tried to pull Kari off the Nightmare, but she made the hell horse kick him into the lava.

The Redcaps seeing the devils defeated, turned against the heroes, but Thorga grabbed two by their necks, Misty Stepped to the each of the lava, and dropped them both in! (earning an Inspiration in the process).

Still not losing his cool, the Wererat Assassin jumped out of the lava and tried one more time to take control of the Nightmare.

But with the heroes now controlling the fight, it wasn’t long before he was killed leaving only the heroes standing with the 11 Soul Coins from the hidden compartment in the Diligence.

And so the Night Diligence continued to Abriymoch.