Having made it across the planes of Phlegathos, the party now found themselves approaching the entrance to the volcano city, Abriymoch. 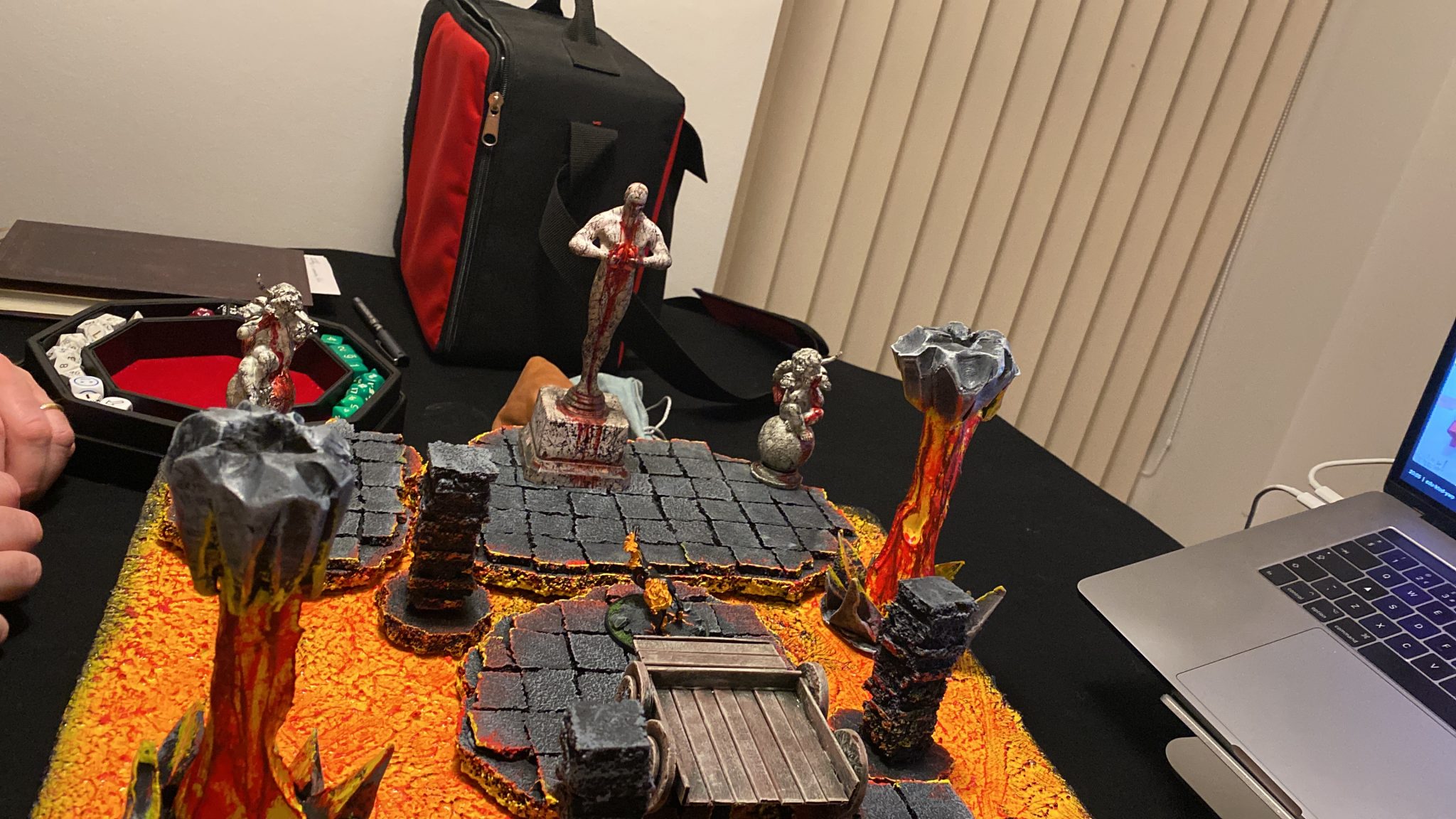 Kari, the Ranger snuck up to spy on what would happen with the Diligence arrived and soon after it reached its destination, a Tiefling approached it clearly looking for the hidden bribe the party had taken.

It was clear he panicked when he couldn’t find the bribe and a large Albino Devil arrived and after a short agitated discussion, the Devil cut the Tieflin in half with a single swing of his axe. 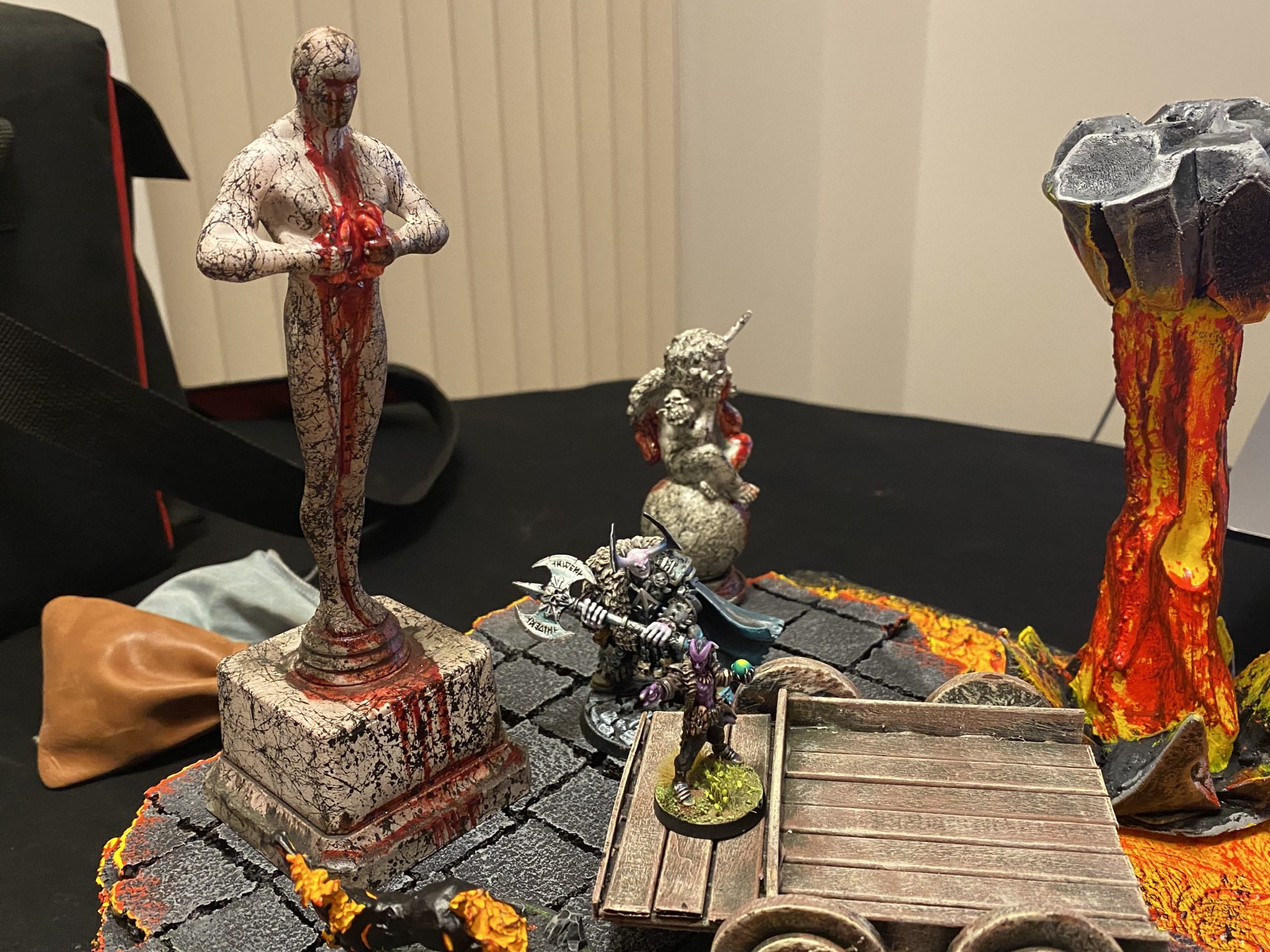 Calmly, he proceeded to investigate the Diligence and while Kari couldn’t see what he found, it was clear he had found some trace that gave him purpose and as he looked out in her direction, he almost spotted her before walking back into Abriymoch.

Kari returned with the news and the party decided to set up camp outside to rest up and to give them some time separation from the arrival of the Diligence.

In the morning a huge crowd of largely unarmed visitors passed by the party. Quickly they decided to join, but only after the Box of Useful Things had given Thorga, the highly armoured Dwarven Paladin, a large pink dress to cover his armour.

And thus the party arrived at Abriymoch.

Left or Right? Strict Side or Sin Side?

The party entered Abriymoch unhindered and decided to follow the crowd heading right, towards Sin Side, at the fork in the road.

They chose wisely as they could see the road to Strict Side being heavily guarded.

The party spotted a promising looking tavern called “The Red Curtain Fall” run by the Medussa Malospe with a blindfold to avoid her accidentally turning patrons to stone. Here they got in contact with a local businessman called Bosnek, who agreed to give them a small task to complete in return for two Soul Coins.

The task was simple: Go to Skid Row, meet the Minotaur Golek, pick up a battery for a device called The Demon Zapper. simple!

Pick up in Skid Row

It was clear to the heroes that Skid Row, was not the same vibrant area as The Red Carpet. Skid Row was more silent, less friendly, less money, more hostile.

But the party found The Hag’s Head, a dirty looking inn, with an actual head of a Hag as a sign and with the front door blown off by some magic long ago.

Inside they found Golek cleaning a knife that he appeared to have killed several patrons with.

But Golek bore no ill will to the heroes. In fact he was very pleased to get rid of the “battery”, which turned out to be a Unicorn.

Bit surprised, the party nevertheless took possession of the Unicorn, but was acutely aware of the dangers of bringing such a pure celestial creature out on the streets of Abriymoch.

They decided to cover its white flanks with soot from the fireplace and drape in a shredder Drow uniform, Kari was carrying from adventures that now seemed to have happened so long ago.

And it worked… almost all the way out of Skid Row. 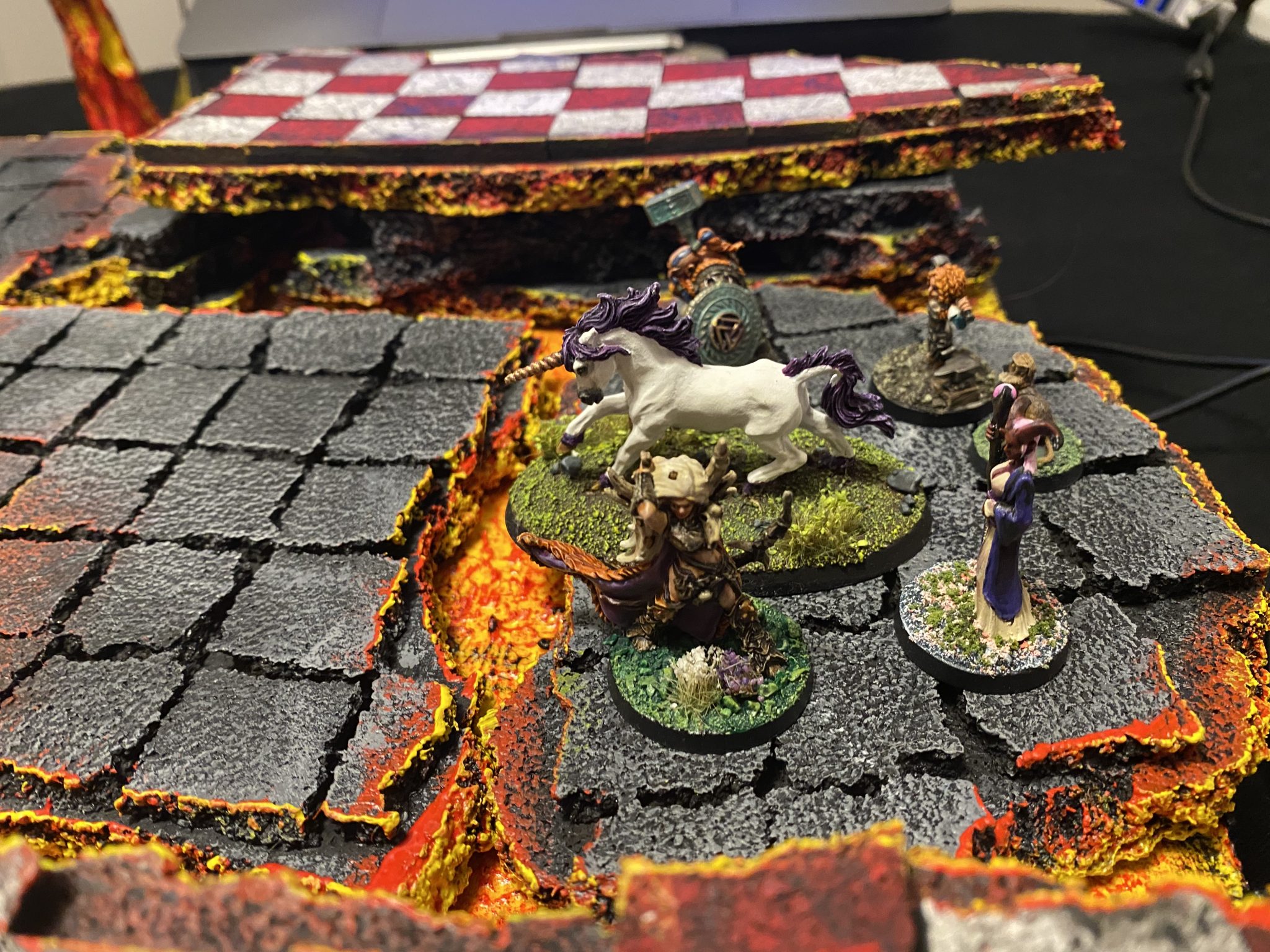 Unfortunately, the disguise did not cover the scent of the Unicorn and as the party were leaving Skid Row and entering Red Carpet, they were ambushed by a pack of Hell Hounds. 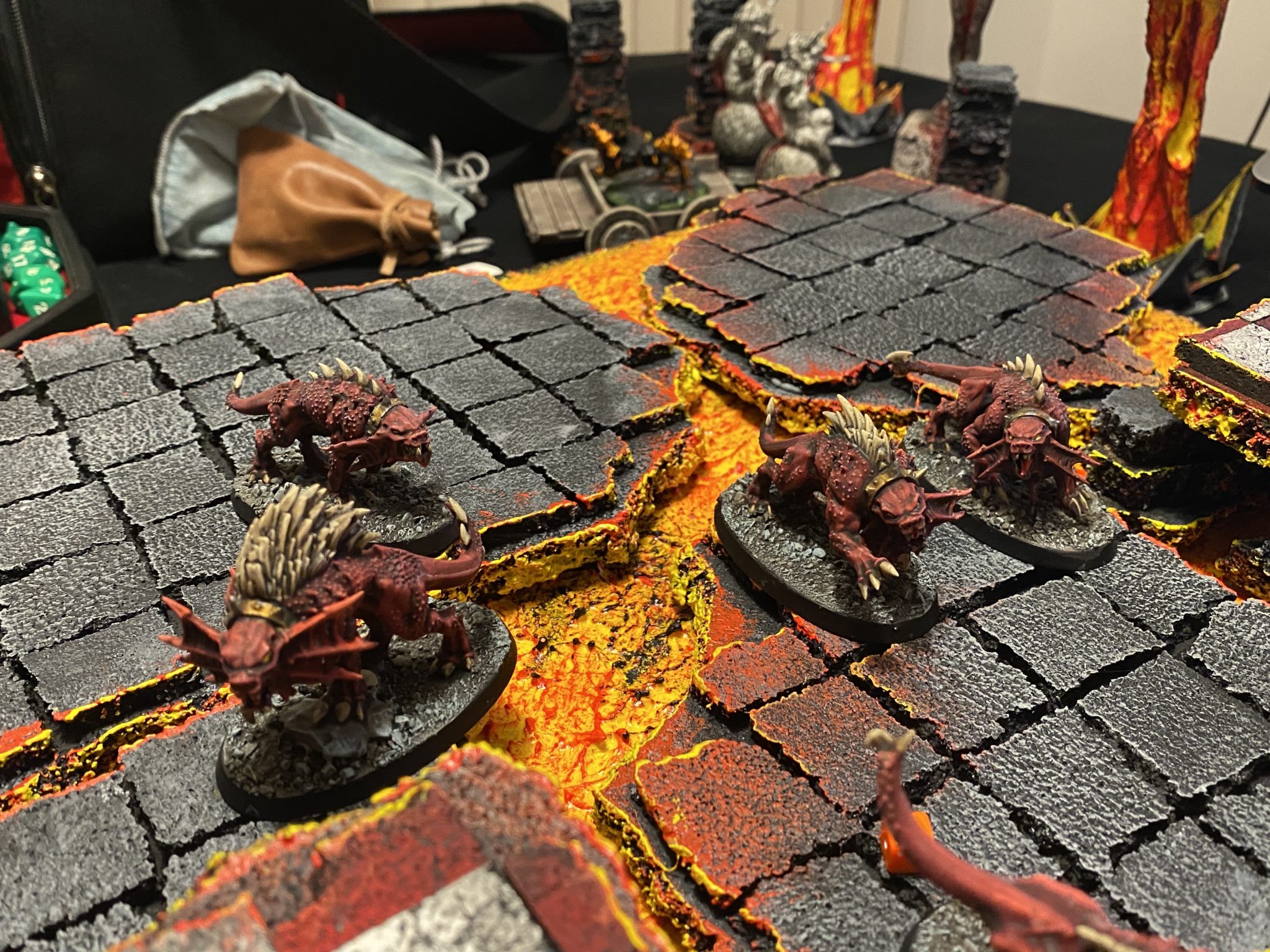 The Hell Hounds were making hit and run attacks testing our heroes defences and the Unicorn was trying to break free from its captors the same time. 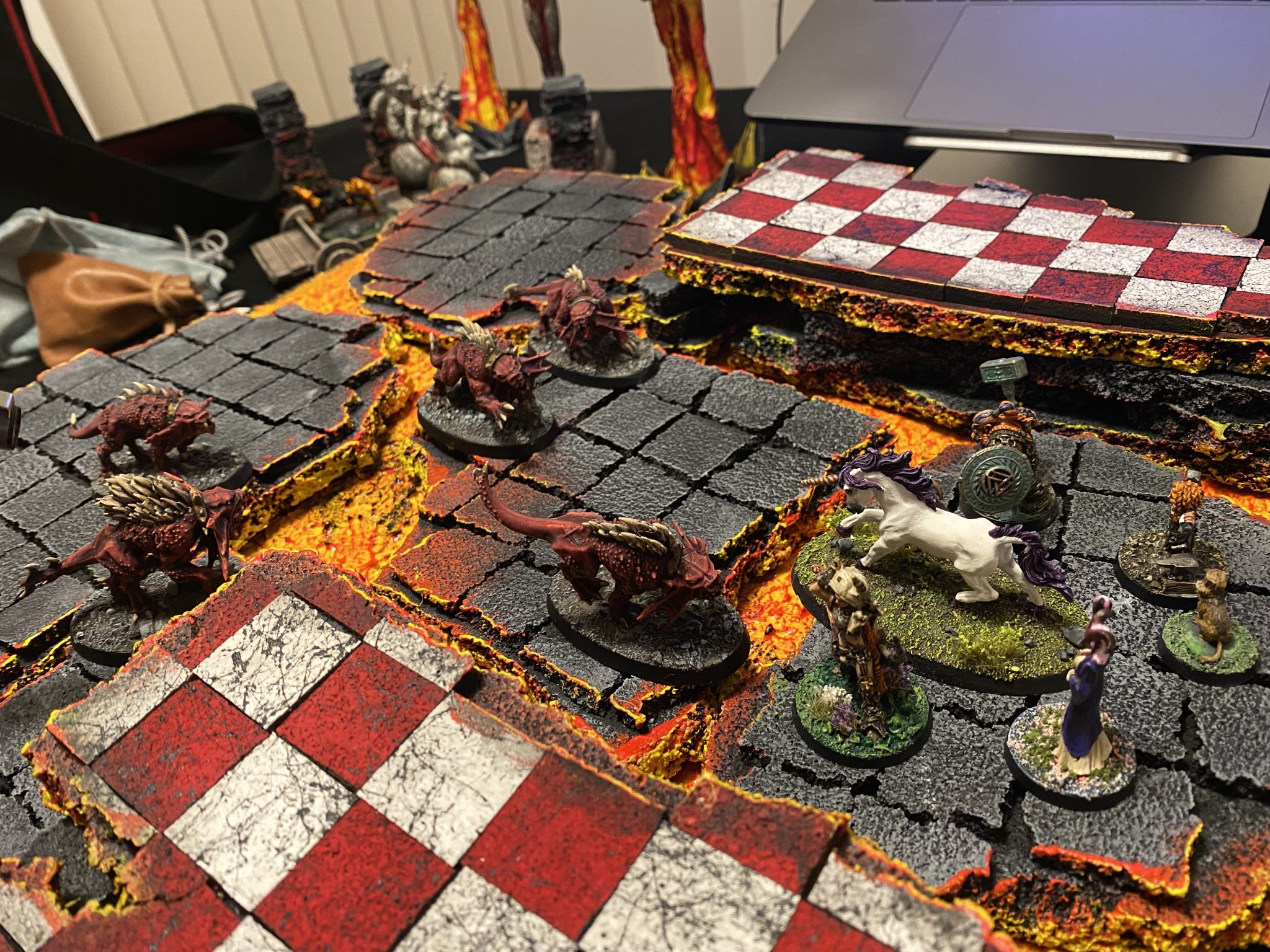 The heroes fought bravely, but the Unicorn was injured.

Kari stepped in to defend the Unicorn, while telepathically urging the celestial creature to jump on the roof of the building next to them (DM Note, the red/white checkered boards were roof tops. I forgot to take out building terrain).

Thorga and Seipora held the line against the Hell Hounds preventing them from following up on the roof. 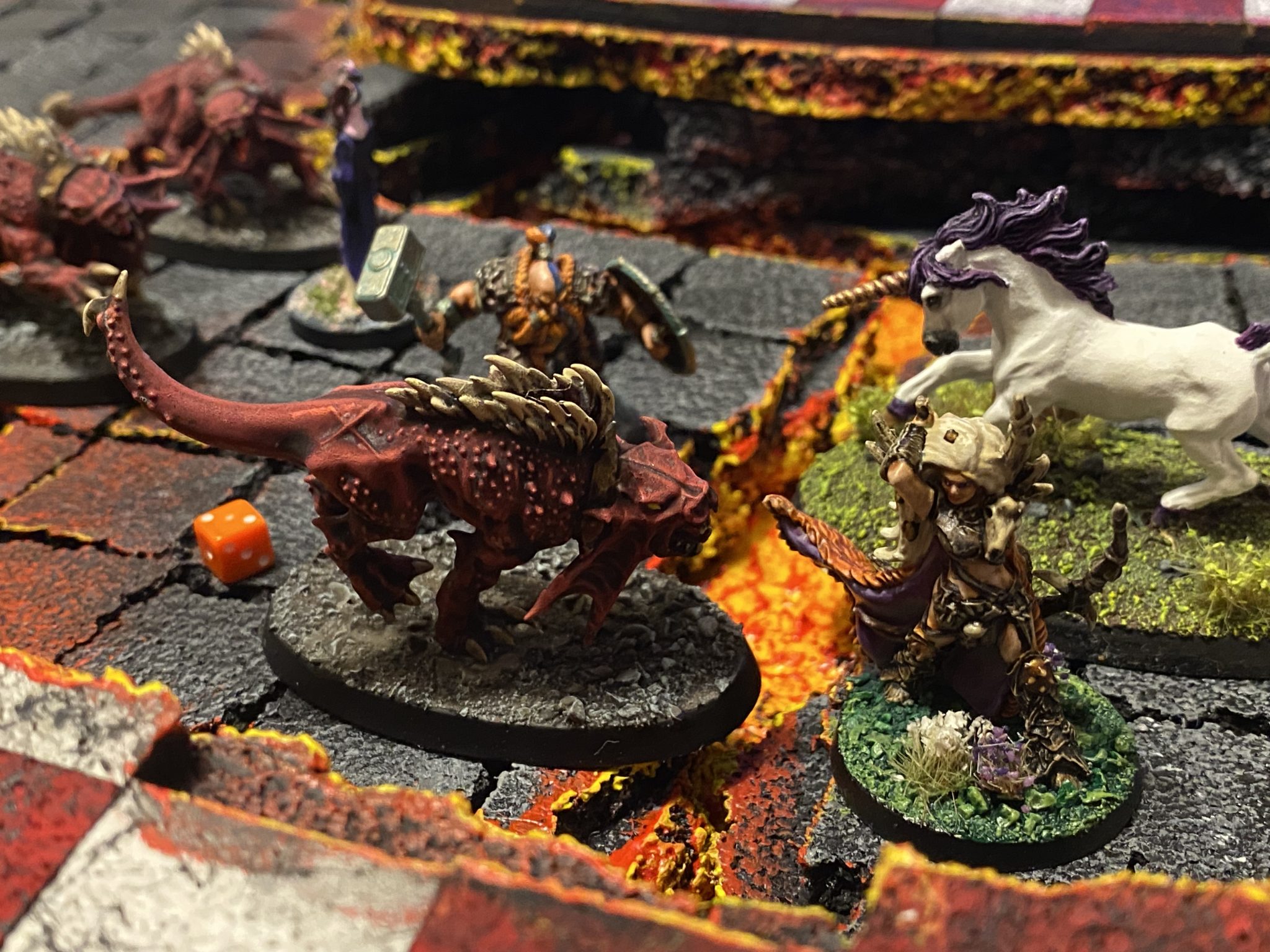 The Unicorn obeyed feeling its captors were not wholly evil and Kari followed the creature up on the roof.

Little did they know that the very roof they jumped up on, held the ambush the Hell Hounds had prepared for: A three-headed Cerberus! 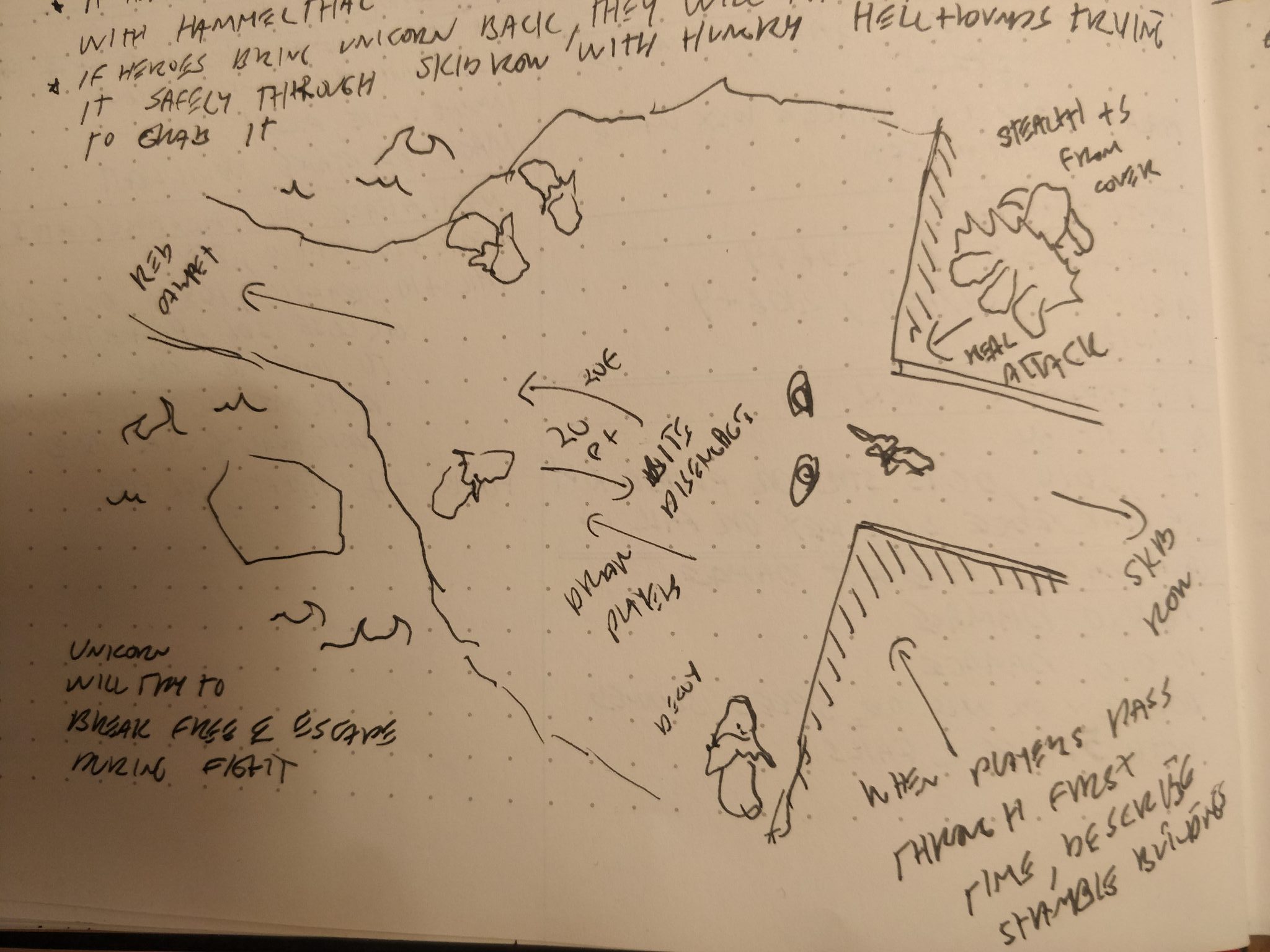 And so the fight against the Cerberus began. 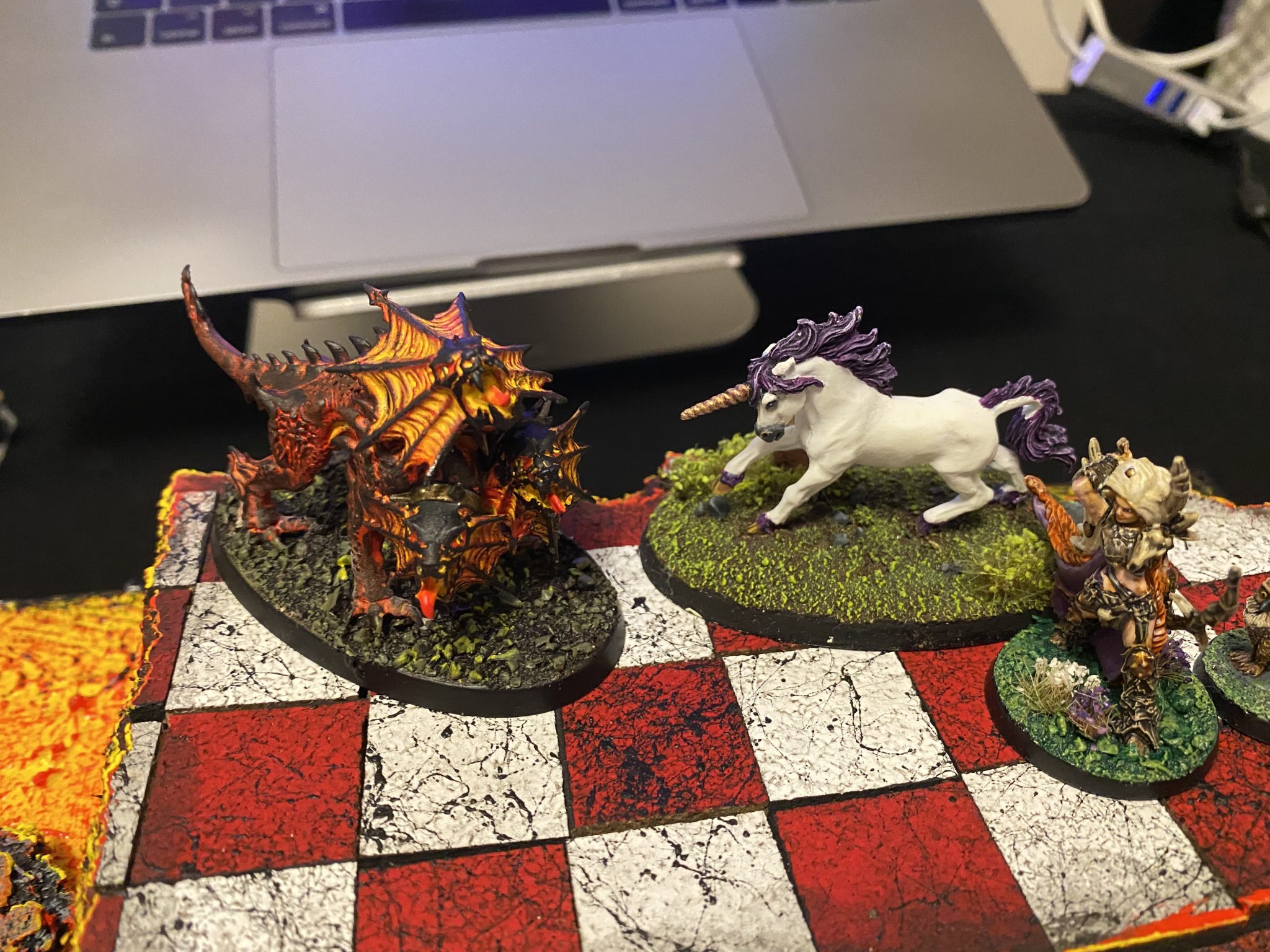 In the end the Cerberus was severely injured and made a last desparate attempt to scare the heroes, before it fled with its Hell Hound pack. 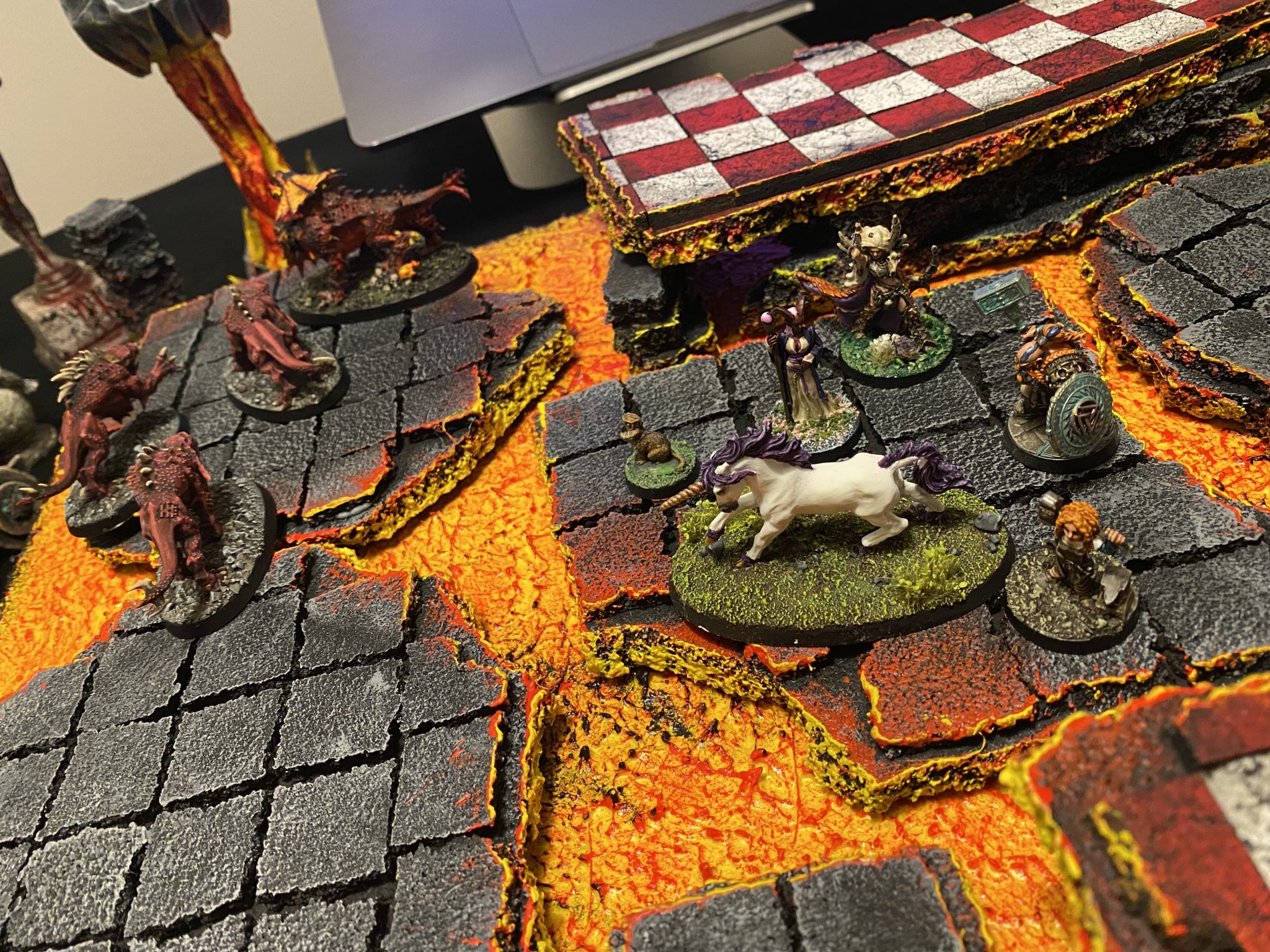 The heroes decided to continue back to deliver the Unicorn to  Bosnek and as they arrived outside The Red Curtain Fall, Bosnek was waiting for them.

But just when the handover was about to happen, Kari telepathically told the Unicorn to run and with a successful performance made it look like the creature had broken free and escaped.

The surprised onlookers tried to stop the celestial creature, but it was free to pick up enough speed to teleport itself away in a blinding flash.

Thorga quickly realising the trick, tried to convince Bosnek that he had already taken possession of the Unicorn. But Bosnek, being an astute businessman, didn’t fall for the bluff although it distracted him enough to not even consider that the Unicorn might not have broken free by itself.

Disappointed of this last minute display of incompetence, left him shaking his head as he walked back into The Red Curtain Fall.