DM notes, we don’t play a regular campaign with our old London gang anymore. But as we all still wanted to keep in touch, I have started what I hope to be a more lightweight (maybe West Marches style) campaign people can dial into once in a while.

Another day is dawning.

As the staff of “Here Today. Gone Tomorrow” finished breakfast, they had their routine morning stand up with their boss Bebbie.

Today, they were left in charge of the establishment as Bebbie had to retire to the back office to complete taxes. All employees were aware Bebbie didn’t really pay taxes, but as it wanted to act out being a tavern owner to the letter, they all played along.

After all, Bebbie had taken them all in one by one and looked after them when perhaps they didn’t have elsewhere to go. 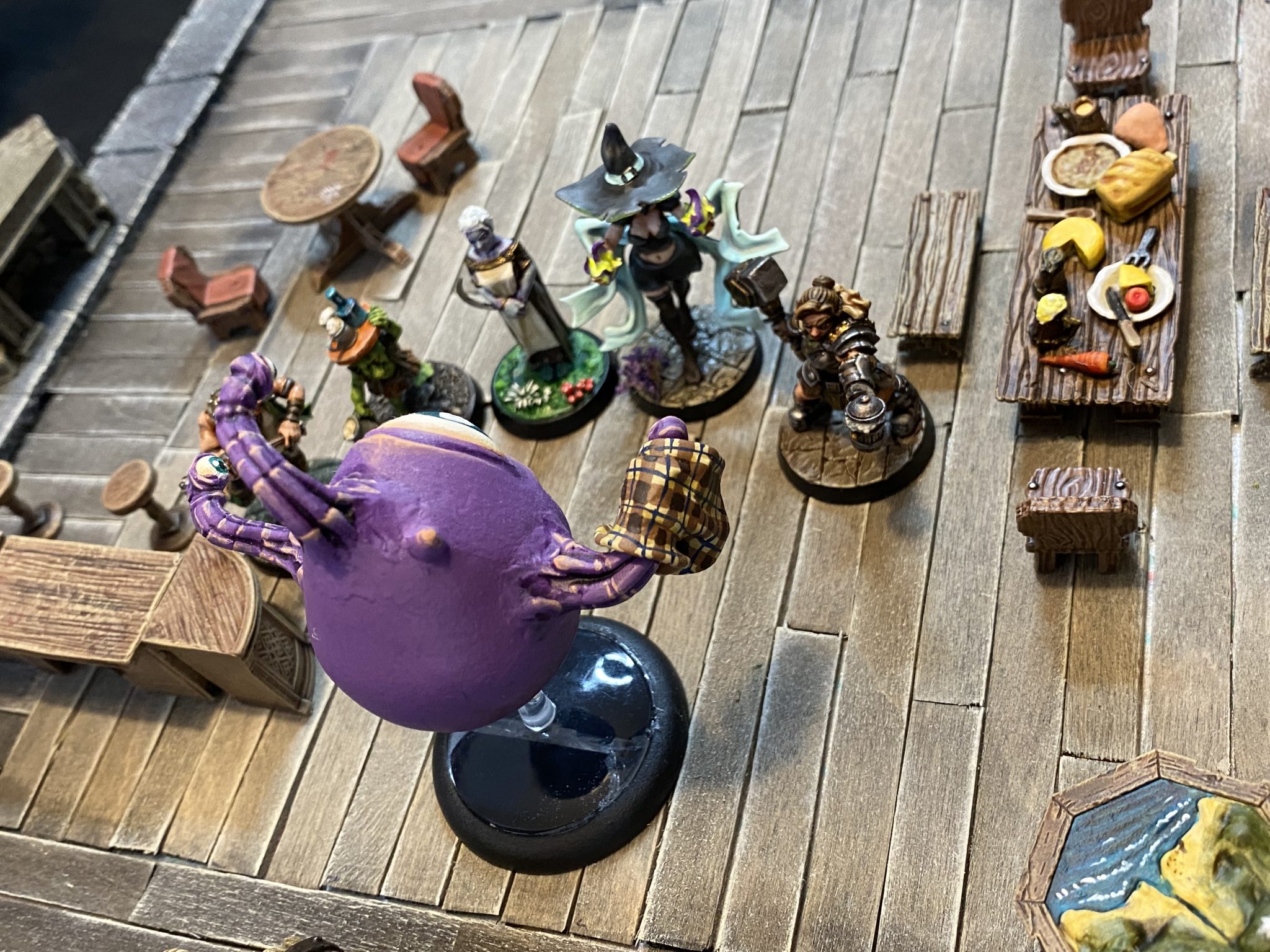 And it didn’t take long for the first customers came: Three elves looking for a resting place and some food. 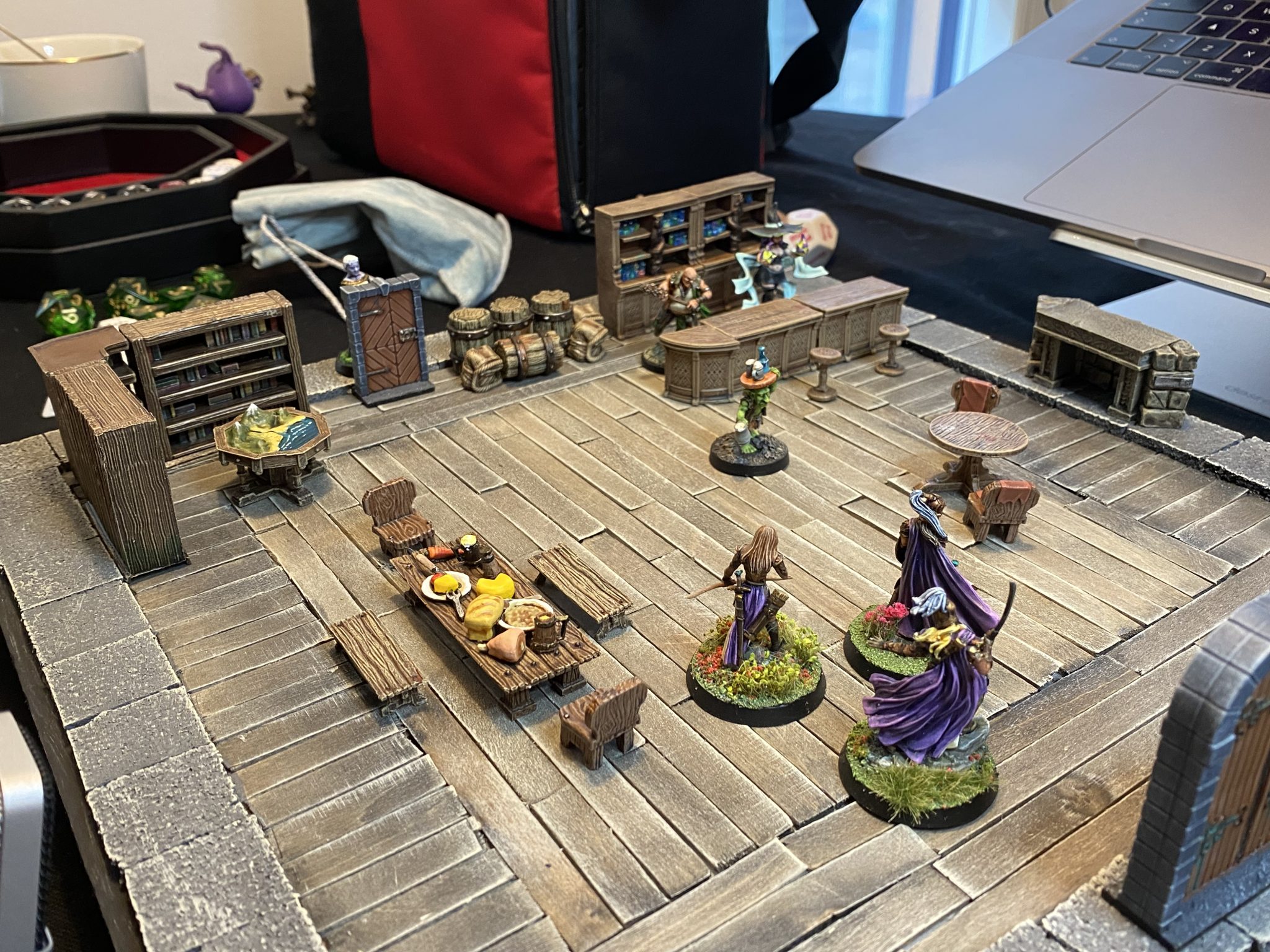 With the team’s Waiter being off today, Kasanov Kaboom, the Goblin Artificer/Busboy, covered for her and received the Elves with somewhat mixed success. But orders where made and one of the Elves was particularily keen on trying the “Bammie”, Bebbie’s signature fey boar ham sandwich. 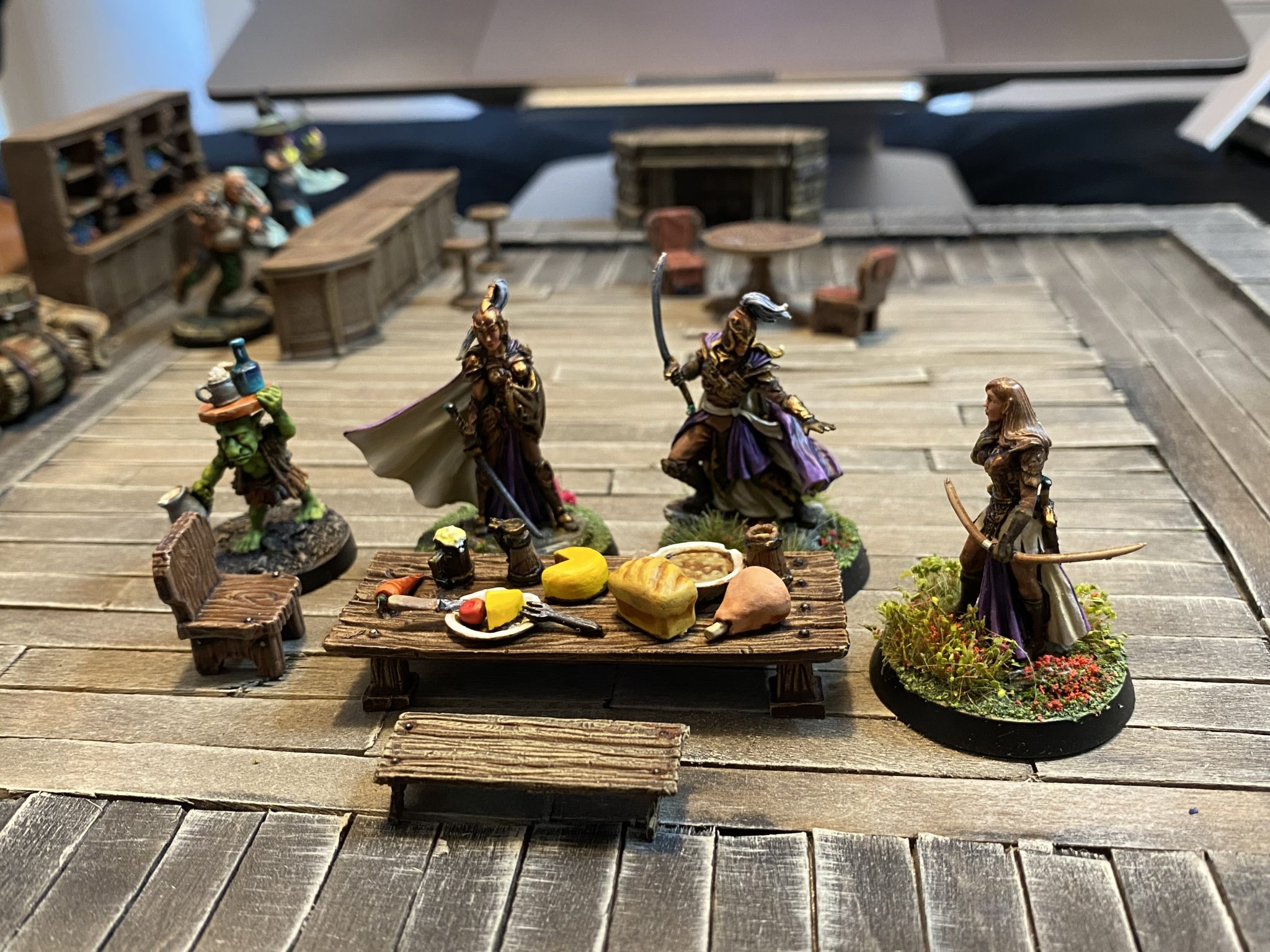 A moment after the order had been passed on to Alfein, the Drow Rouge / Chef in the kitchen, two large scruffy looking Orcs entered the tavern, one of which also ordered a Bammie. 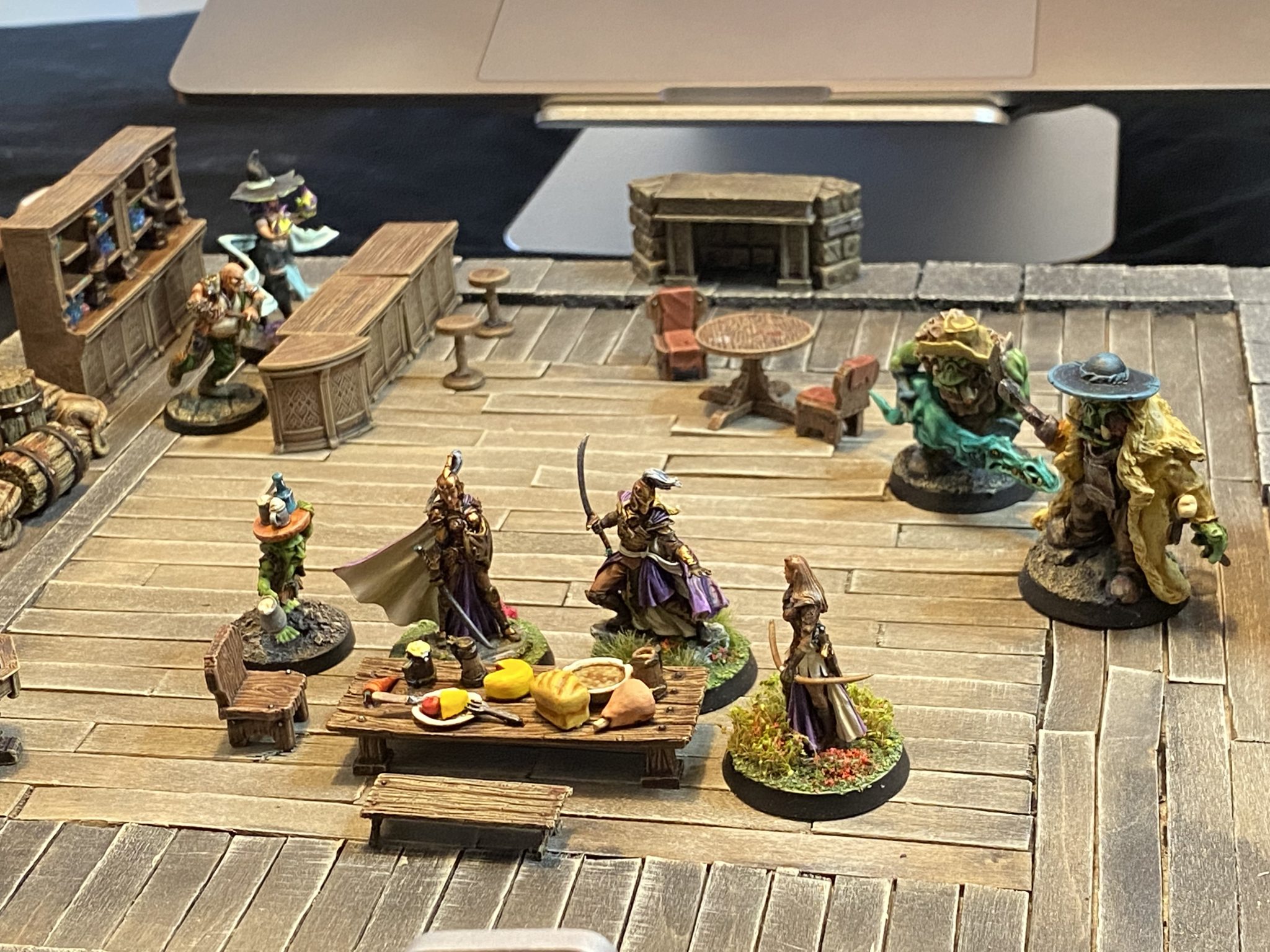 Alfein, receiving the second order from Kasanov, realised there was barely enough fey boar ham for one sandwich, let alone two and she tried to double up with some turkey.

The Elf receiving the sandwich realised this fast, but Penny Purplesparks, the Human Wizard / Bartender, quickly brought over some cocktails on the house and in secret cast Charm Person on the Elf to convince him to order another dish. She was successful and the situation was deescalated.

Unfortunately, the Orc also realised his Bammie was not what was promised and he walked up to Alfein in a threatening manner demanding a replacement sandwich and would not take no for an answer. 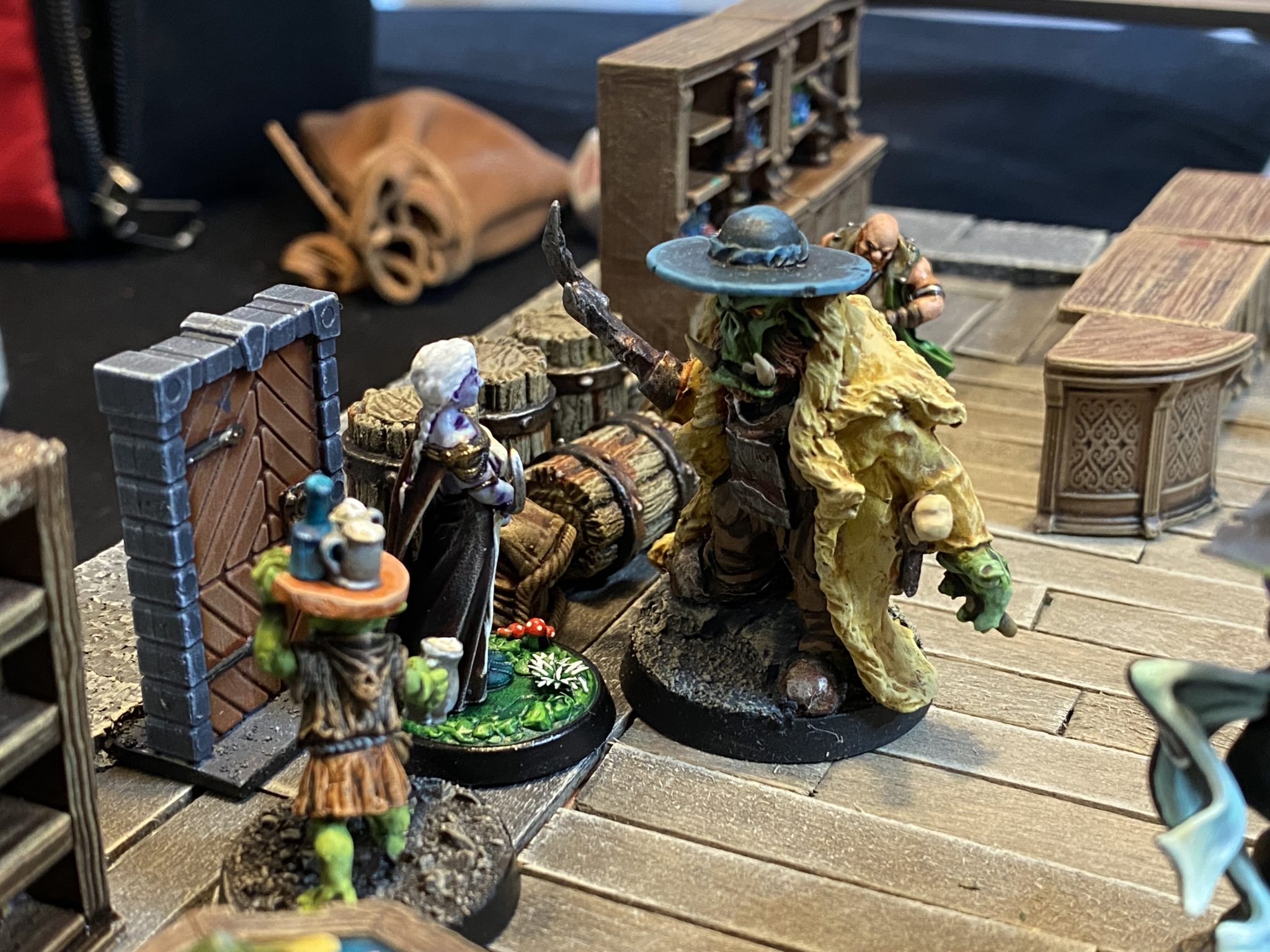 Bluth Roughcheek, the Human Fighter / Bouncer, realised the situation was getting out of hand and knowing the temper of the Chef, he grabbed his trusted Axe and moved towards the dispute, but before he could intervene, his Drow colleague had chopped off one of the Orc’s hand and the fight was on.

While the Orcs were big and tough, they were no match for the tavern staff. 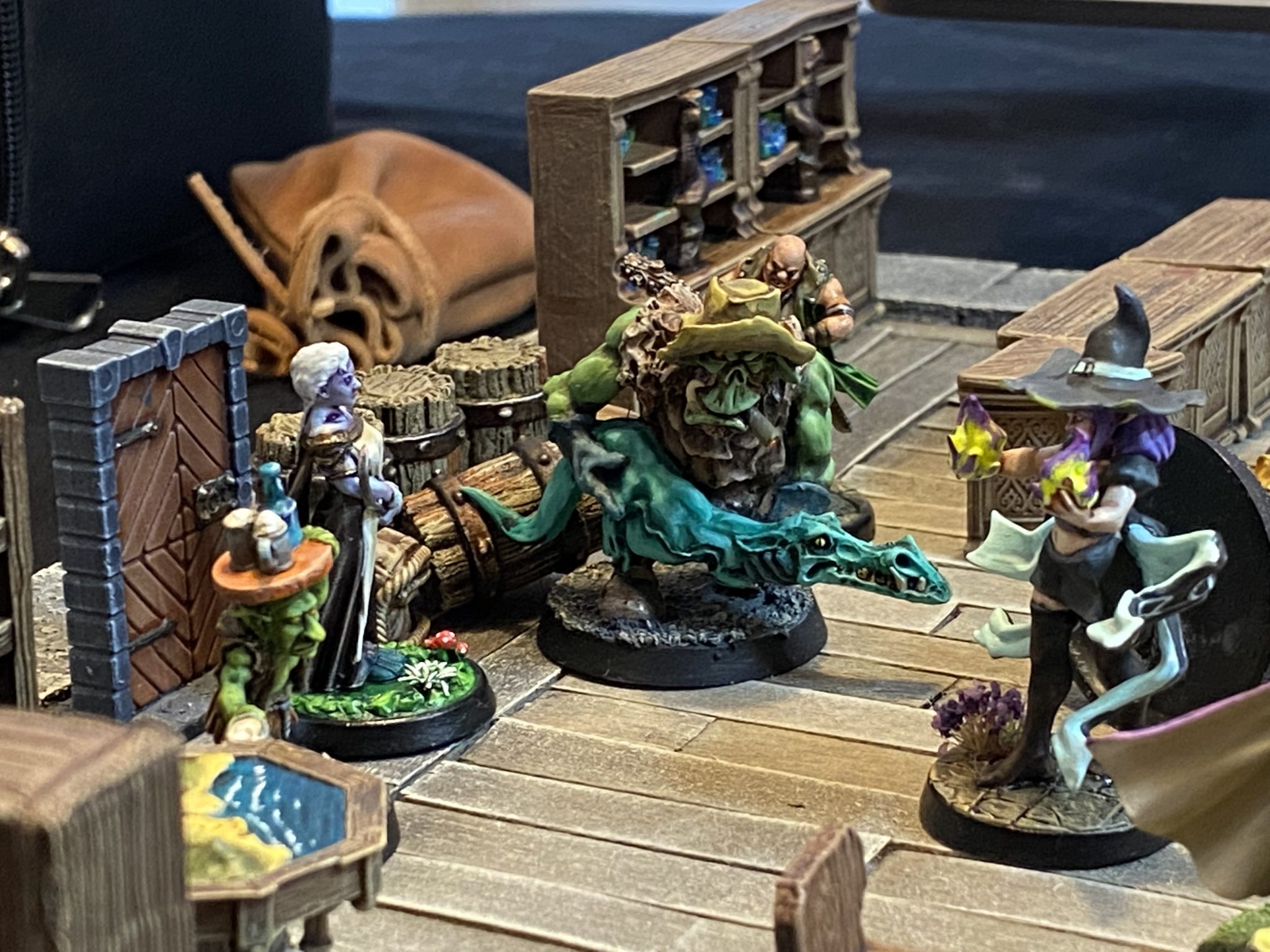 The elves left satisfied with their meal and the good experience.

But the root cause was not solved. The team would need to stock up on fey boar ham. Fortunately they had all taken the required company course in operating the interplanar tavern using the interactive map console. 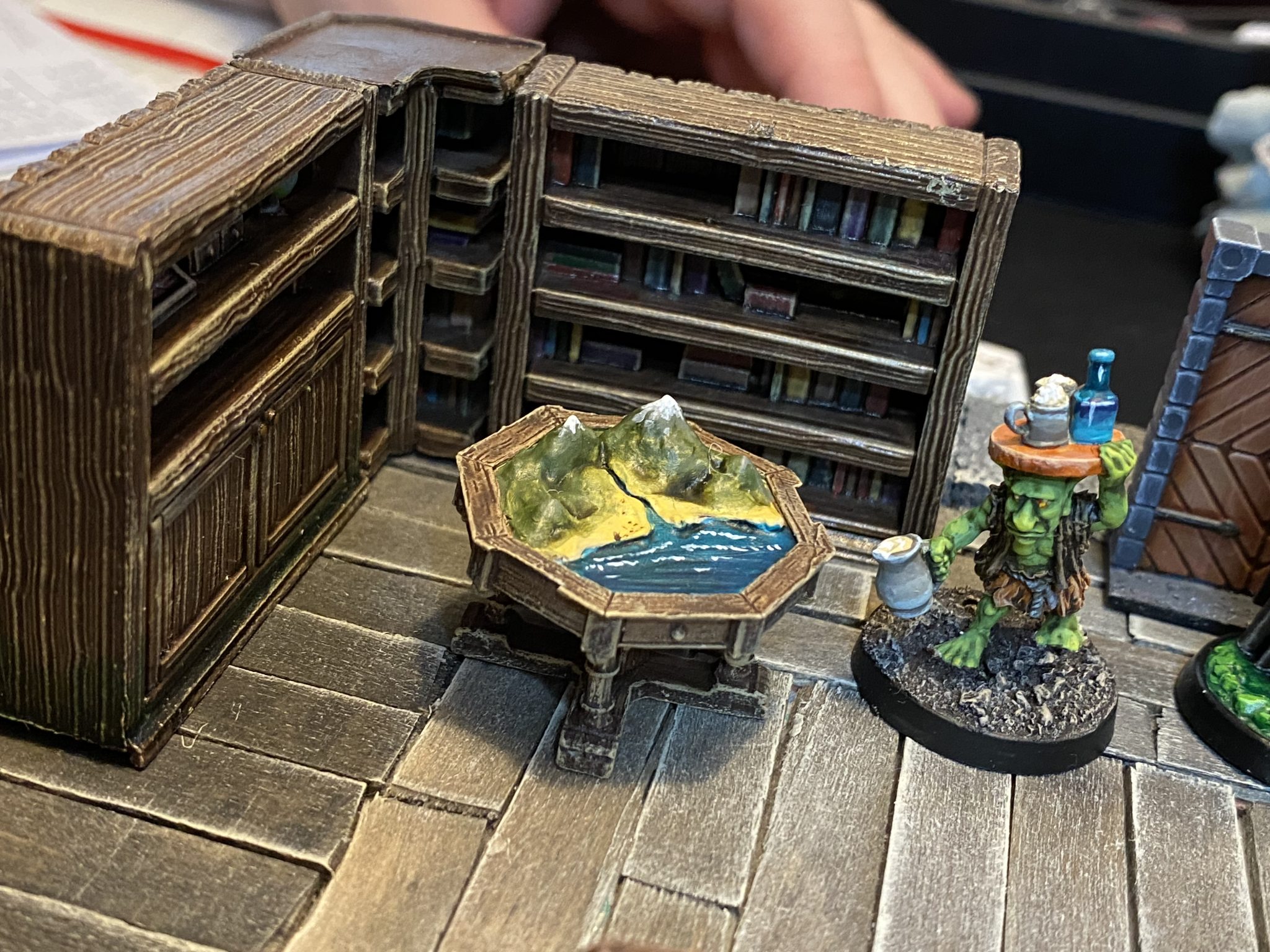 And with that, they set course for the Feywild.

They arrived in the middle of a permanent market place and spotted “Korak’s Chops”, the local butcher.

The store was full of customers, all shouting for attention, pushing and ordering goods. Korak, the overweight Minotaur butcher, smiled as he stressed around trying to service customers as fast as he could.

The team tried to get his attention multiple ways (DM Note, this was a Skills Challenge) and Kasanov even tried to create a path by conjuring unpleasant smells (which just resulted in angry glares at an innocent Pixie) without much luck until Penny turned invisible and muscled her way through the crowd.

She caught Korak’s attention and gave him the order.

“Can I have your name?” Korak asked and Penny gave him her name. Shortly after, the order arrived and the team made their way out of the shop.

Outside, it became clear that Penny accidentally had paid for the goods with her name!

Back in the store, the team confronted Korak, but although this was an innocent misunderstanding, Korak could not refund the name as all purchases were final… but he did need Sprouts and told the team to talk to the Satyr Peb, who was overdue in delivering Sprouts.

At the edge of the forest, the team found Peb the sad Satyr, playing his flute. The melancolic song went straight to Kasanov’s heart as he was profoundly moved by the song.

Peb told the team he could not catch the Sprouts as he had run out of Griffon feathered arrows.

The team debated whether to try to help him catch Sprouts or try to retrieve Griffon feathers from the nearby Griffon nest.

In the end they decided to go for the nest.

But to do that they wanted to arm themselves with a net and they went back to the marketplace to procure a net.

DM note, the whole net idea took me by surprise and none of the following encounter was in any way planed.

At the market they spotted a stall a bit away from the the others. It didn’t have the usual colourful fey quality, but was more grey and muted.

It was staffed by an old crooked woman, Mother Livid Lydia, who was selling fishing and hunting equipment.

Mother Livid Lydia suggested Kasanov buy a rather shabby looking net for a year of his tears.

Kasanov, being an Artificer, looked at the net and realised that it was more than met the eye. It was magical and if a creature was trapped in the net, they would have disadvantage in casting magic. So he agreed. 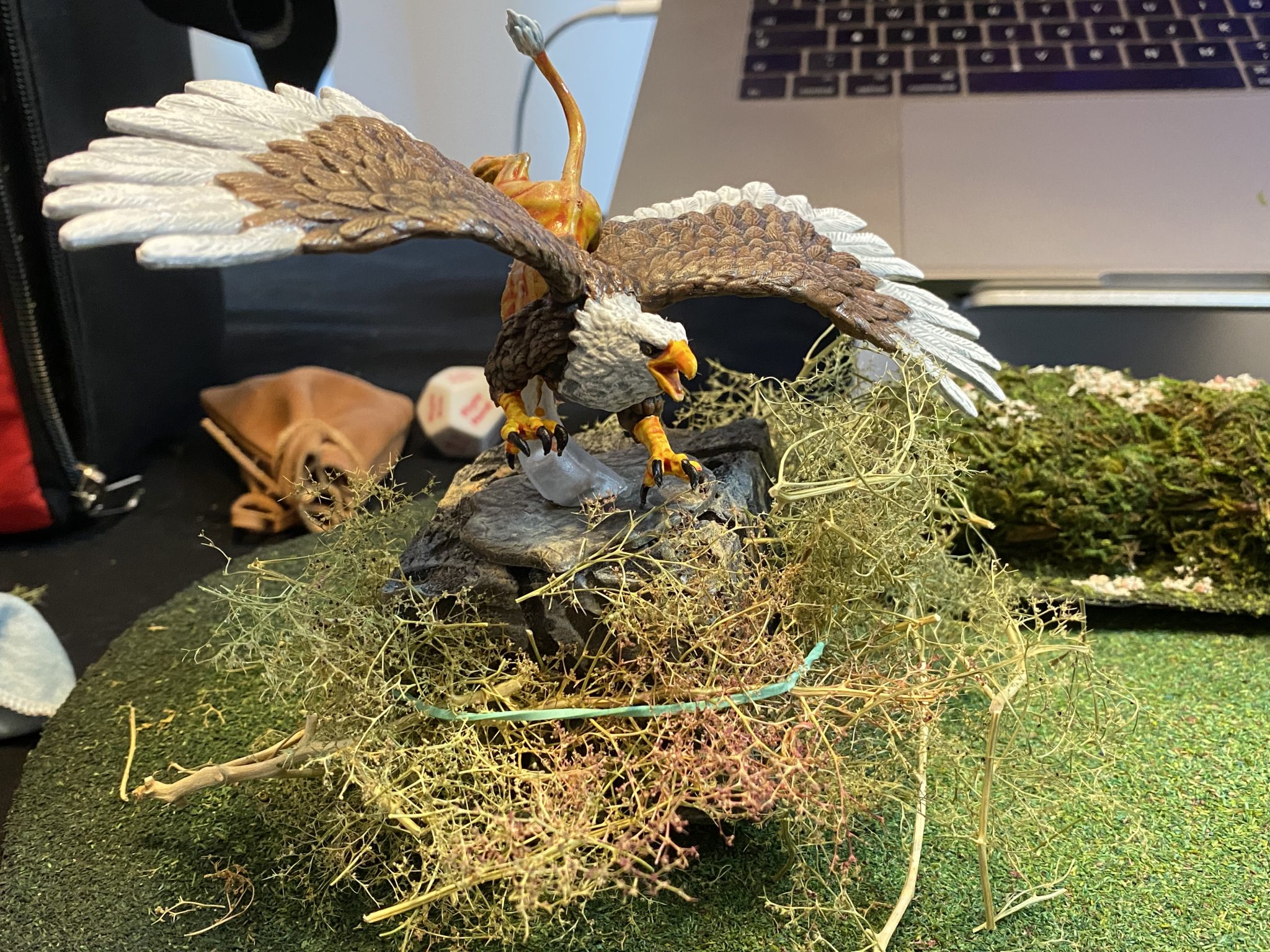 And the hunt was on. Soon the team was at the edge of a clearing in the forest with the mighty Griffon resting in its nest. 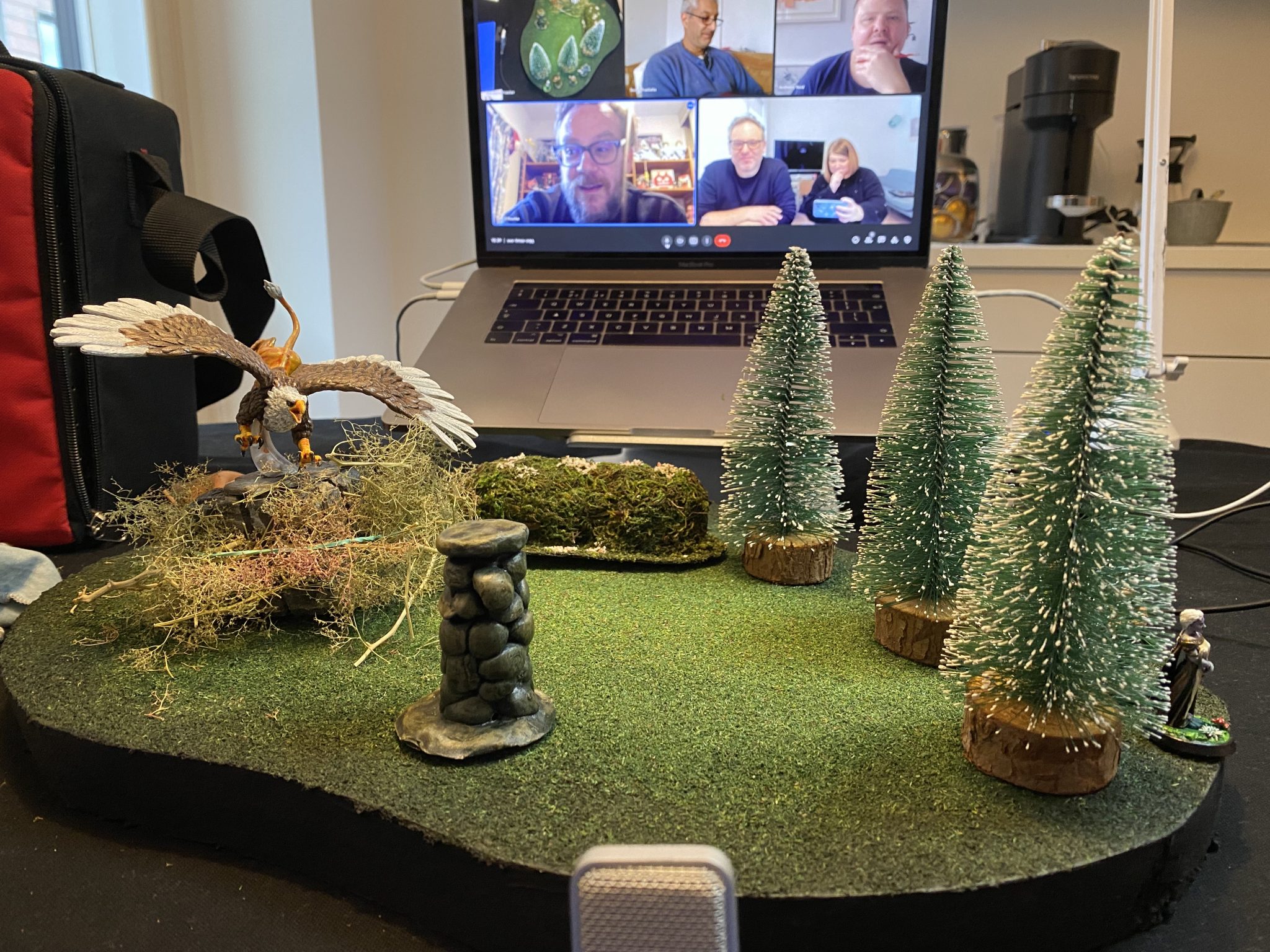 Kasanov used his magic to cast the net over the Griffon, but the beast with its keen eye sight,  spotted the net and took off trying to find the culprit. However little Kaboom was hiding in the forest edge and the Griffon couldn’t see him from the air. 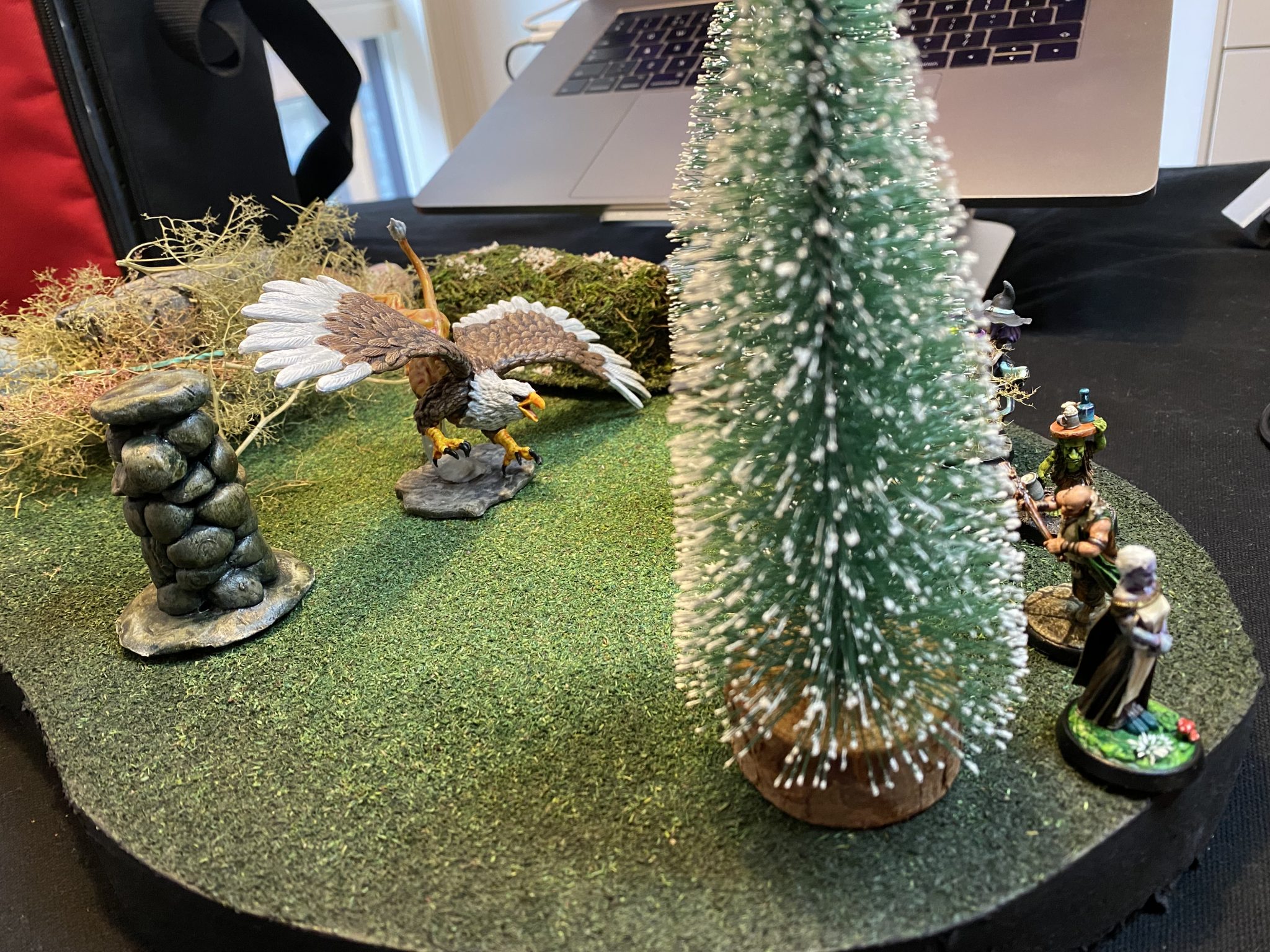 Penny Purplesparks, turned invisible and silently made it down the left side of the clearing, while Alfein used her stealthy Rogue skills to make it down the right side. 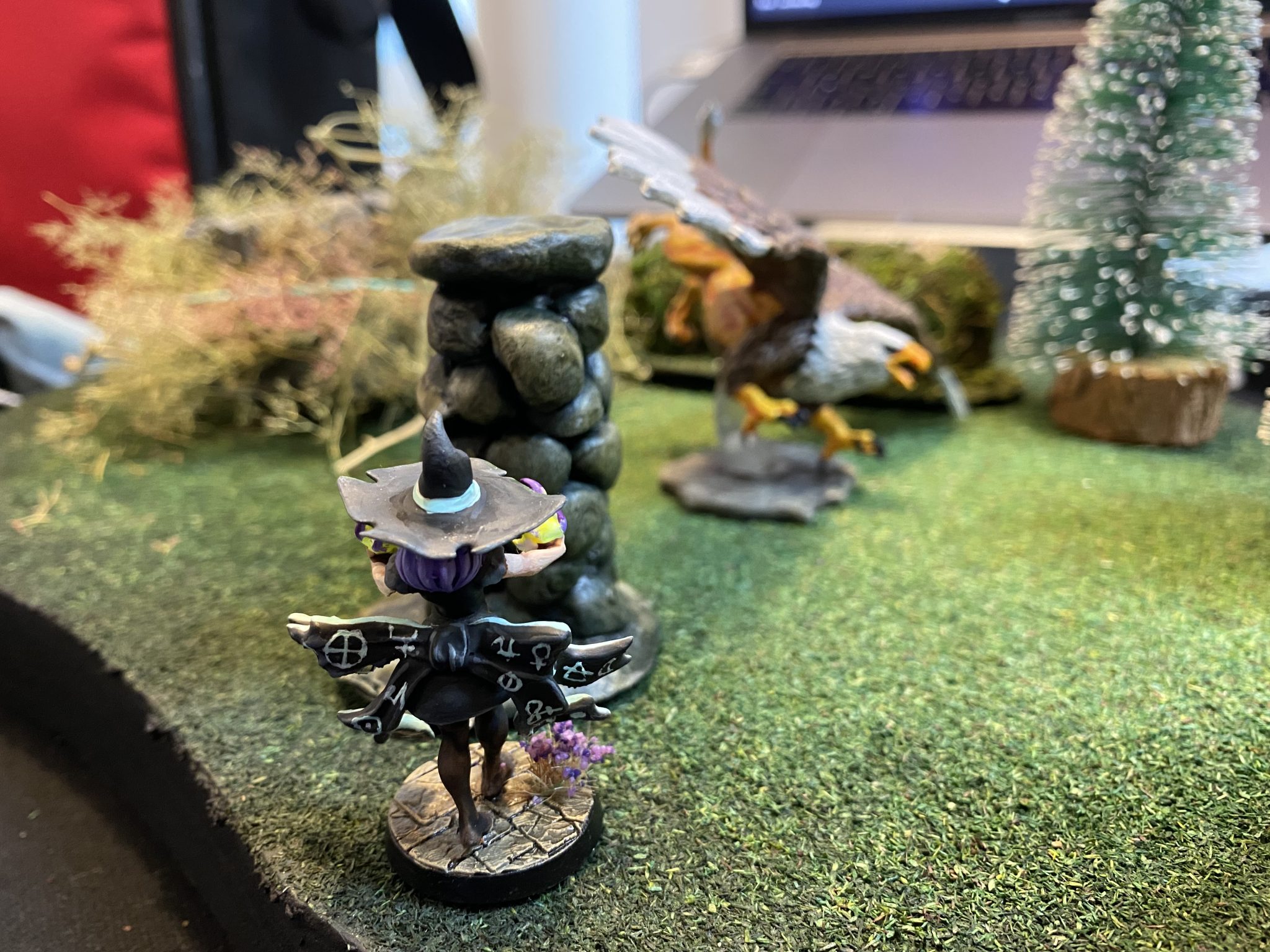 The Griffon, still unaware of anybody but Kasanov, landed and tore its way through the forest to get to the Goblin, but with the branches in its way, failed to damage the Artificer.

The Goblin retreated into the thick of the forest, leaving the Griffon faced with Bluth.

However, Penny had made it up to the nest where she found a confused Griffon Chick, who could feel her presence but not see her. 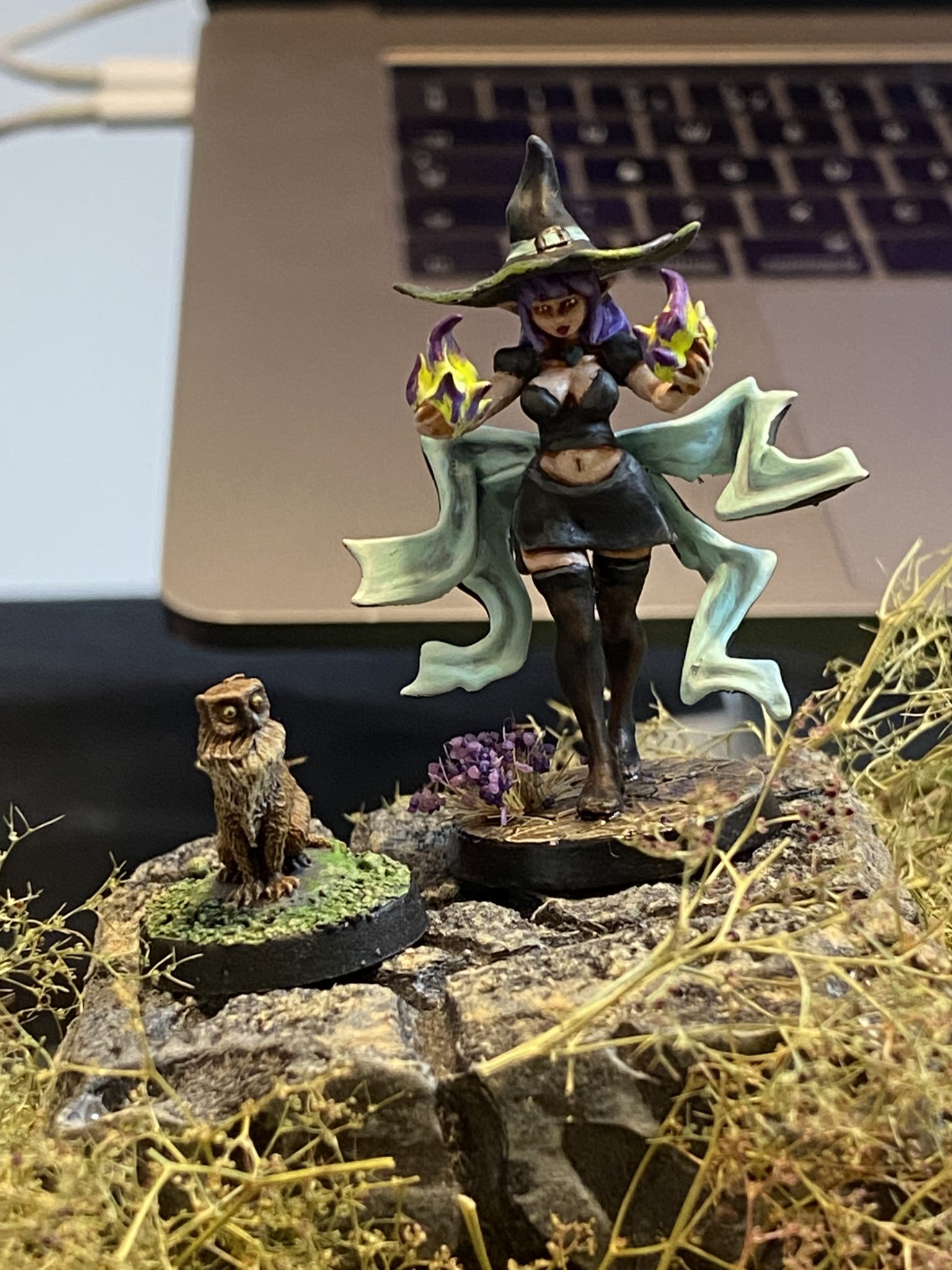 Furthermore, she decided to yank a handful of baby Griffon feathers of the little creature, who called out in fear to its mother, which was lucky for Bluth as the Griffon turned to fly for the nest split seconds before spotting him.

It flew back attacking Penny and knocking her off the nest and unconscious and bleeding from her wounds. 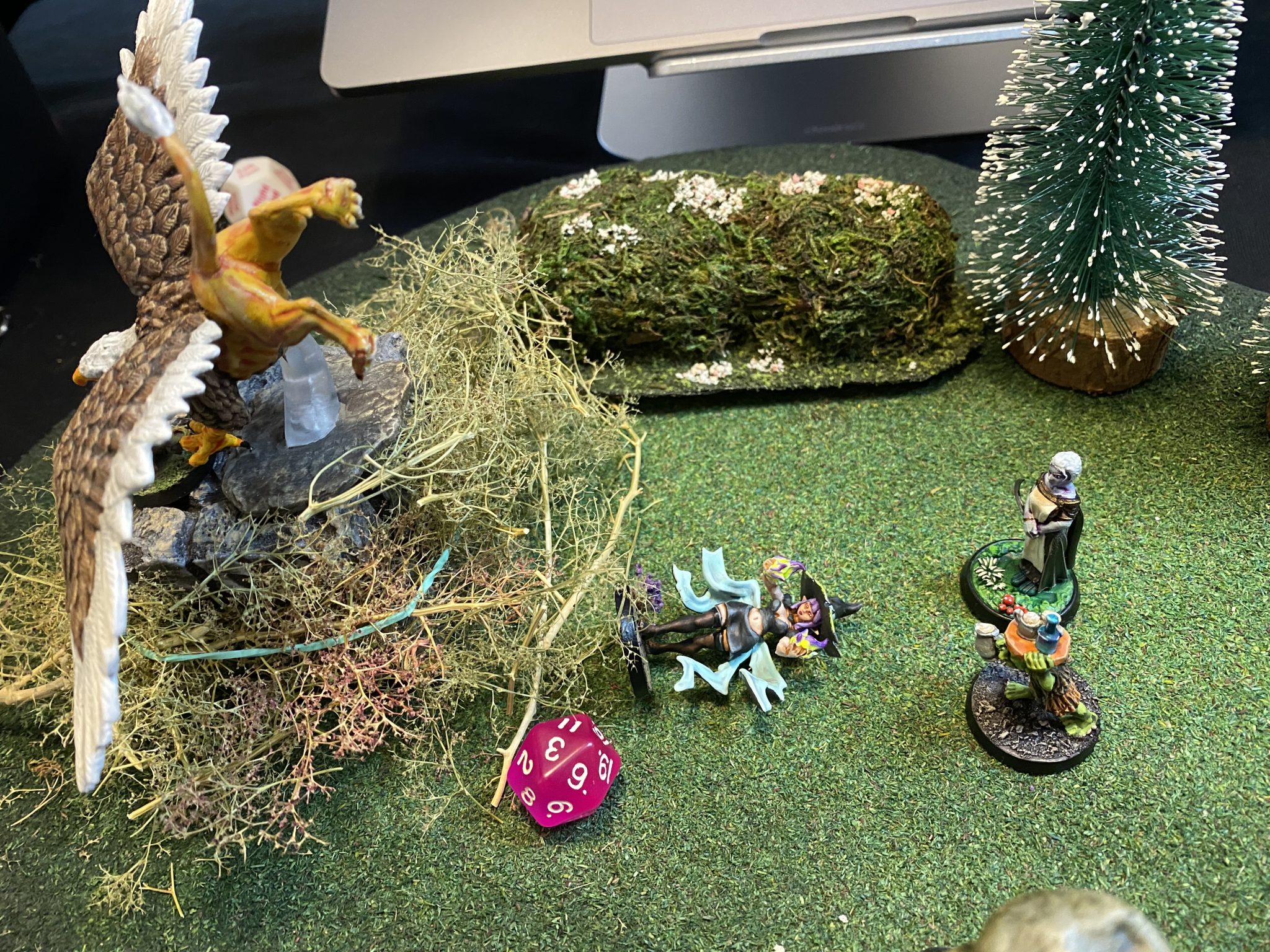 She landed on the net and between Alfein and Kasanov, they managed to pull her back into the shades of the forest, followed by Bluth holding the rear in case the Griffon would attack again. But it was too busy with its chick so the team made it out of the clearing and back to safety.

Hand me the ham

The Satyr Peb was delighted and surprised to the see the team returning alive and with feathers. He quickly attached the feathers to his arrows and went off hunting for Sprouts.

Soon he returned and the team could bring the Sprout to Karnak in return for Penny’s name and with that… and the fey boar ham… they returned to “Here Today. Gone Tomorrow” ready to serve the customers the next day. 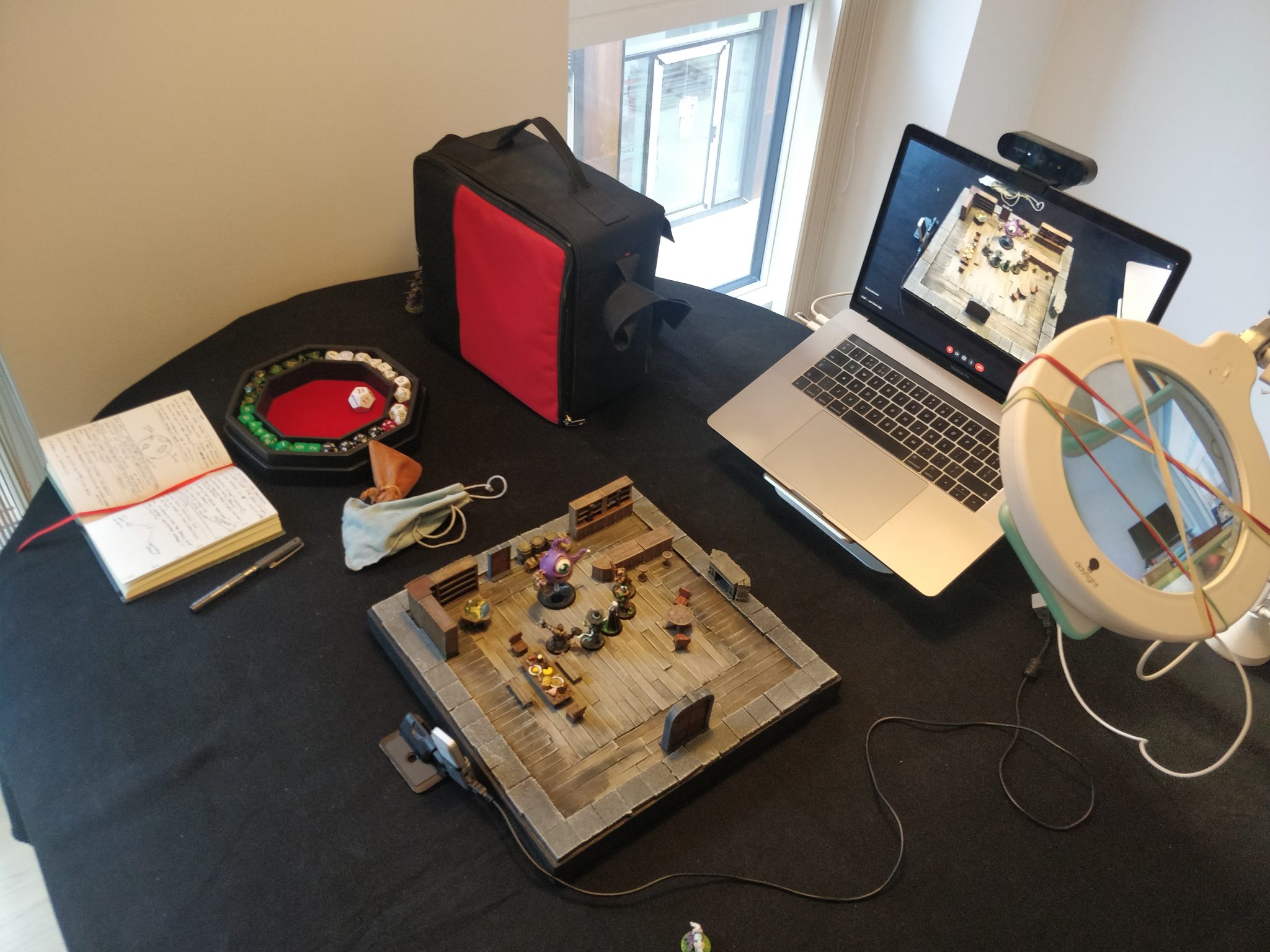