Having failed (on purpose) to bring the Unicorn to the the devil merchant, Bosnek, the party now had to decide what to do next.

Staying at The Red Curtain Fall, seemed expensive and it was still only afternoon, so they decided to go and get what they came for: Sepora’s 19% soul that she accidentally had paid to the Brothers Deville.

Crossing Skid Row was an easy task as the heroes now had the lay of the land and soon they stood in front of a 10×5 meter square hole in a small mountain: The entrance to Brothers Deville’s workshop.

Here they were greeted by two huge Stone Golems shaped like dwarves. To their surprise, it became clear these were not mindless constructs, but indeed they were the actual Brothers Deville.

Unfortunately, they had taken Seipora’s soul and created a Soul Coin, which they had paid an Angel for some bolts.

They could tell the party that the Angel had left a home address as The Pleasure Dome, the epic centre of entertainment of Sin Side.

A bit disappointed, the party was invited to spend the night in the workshop and here they bought a fancy new weapon the brothers had been working on called the “666 Shooter”.

They got a discount on the account that Seipora wrote them a review of how the Hell fire cannon had been a success for heroes in fighting the forces of the Dark Elves during the Battle of Dragonskeep.

Over dinner they learned of the unusual brothers’ background:

The brothers had been talented dwarven craftsmen a long long time ago, whose souls had been sucked into Soul Coins and ended up in Phlegetos where they used their ingenuity to escape the confinement of the coins.

But having escaped, the two souls were lost and couldn’t find their way out of hell, so in order to survive and thrive, they crafted two Stone Golems in their own image and took possession of these mighty bodies and in time became mighty weapon smiths of Abriymoch.

The next day the party made their way to the bass pumping Pleasure Dome, following excited party goers.

Inside the Dome was divided in three areas:

The heroes headed for the bars around the Centre Stage, but the terrifying Pit Fiend flying around in the cage had, Thorga and Seipora shaking in their boots and Kari had to drag her companions towards the centre, while Ms Gentlefeet indulge in a Blood Pie Eating contest (and won).

In the meantime Seipora had gained her senses and quickly turned to her calming habit of pickpocketing a nearby visitor.

They had only just reached the bar at the Centre Stage before the crowd went wild and the Rave Zone dancers parted ways letting a frightened Dryad through into the Cage to be thrown into a hopeless fight with the Pit Fiend, who quickly tore her into fire wood and saw dust.

Cheering wildly, the dance crowd went back to the euphoria of the rave.

The heroes realised that the far end of the Rave Zone had an entrance in the floor leading down to some sort of location where prisoners were held. Surely this would be where the Angel Azrael was held prisoner, they reasoned.

As they approached the dancing crowd, the heroes realised, that getting through the crowd might be tougher than they expected.

Roll initiative and dance for your lives!

DM note, so much happened in this encounter that I simply lost touch, but the aim was to get through a moshpit of sweaty guests with flailing limps and seductively charming succubi/inccubi. 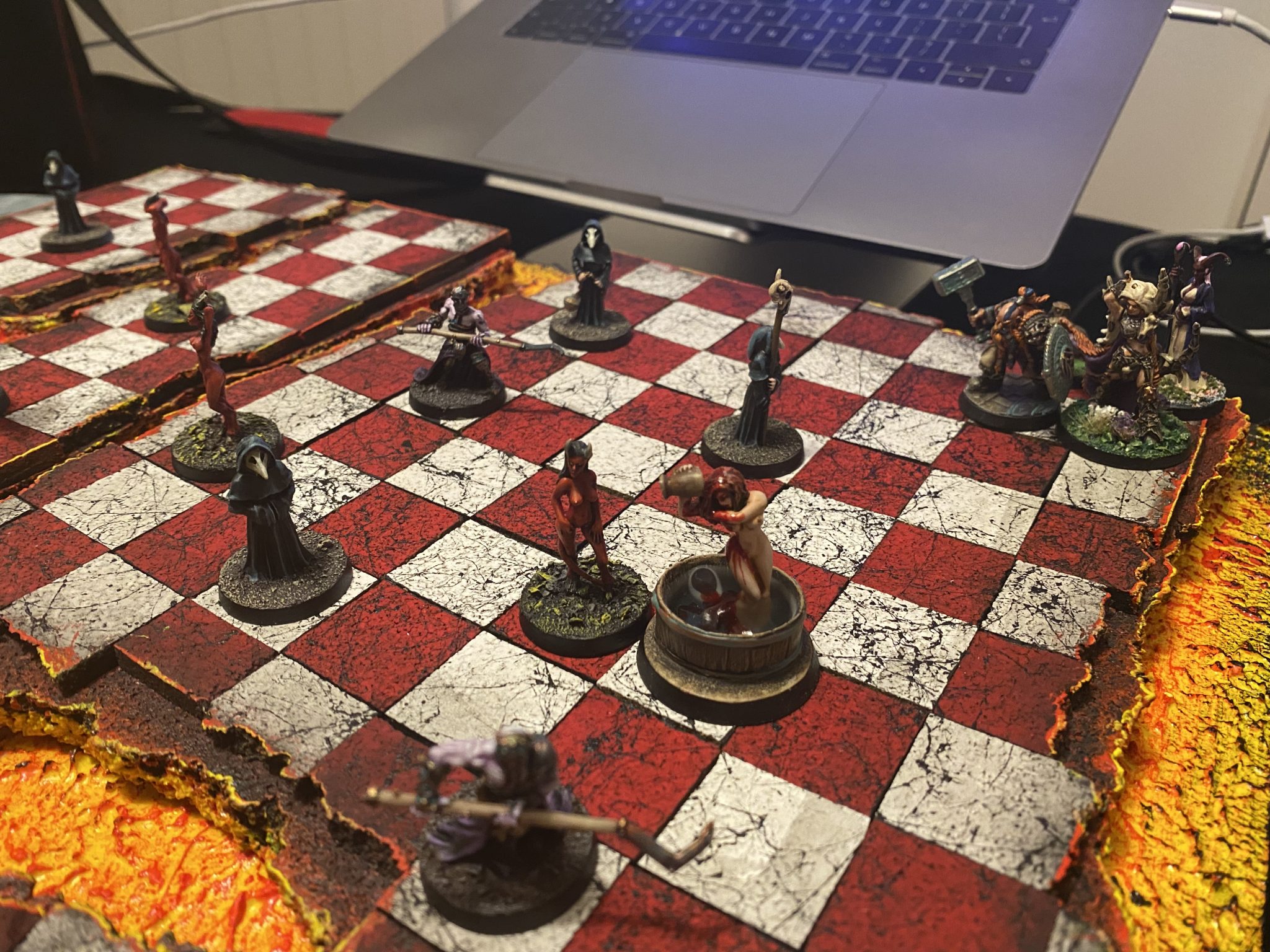 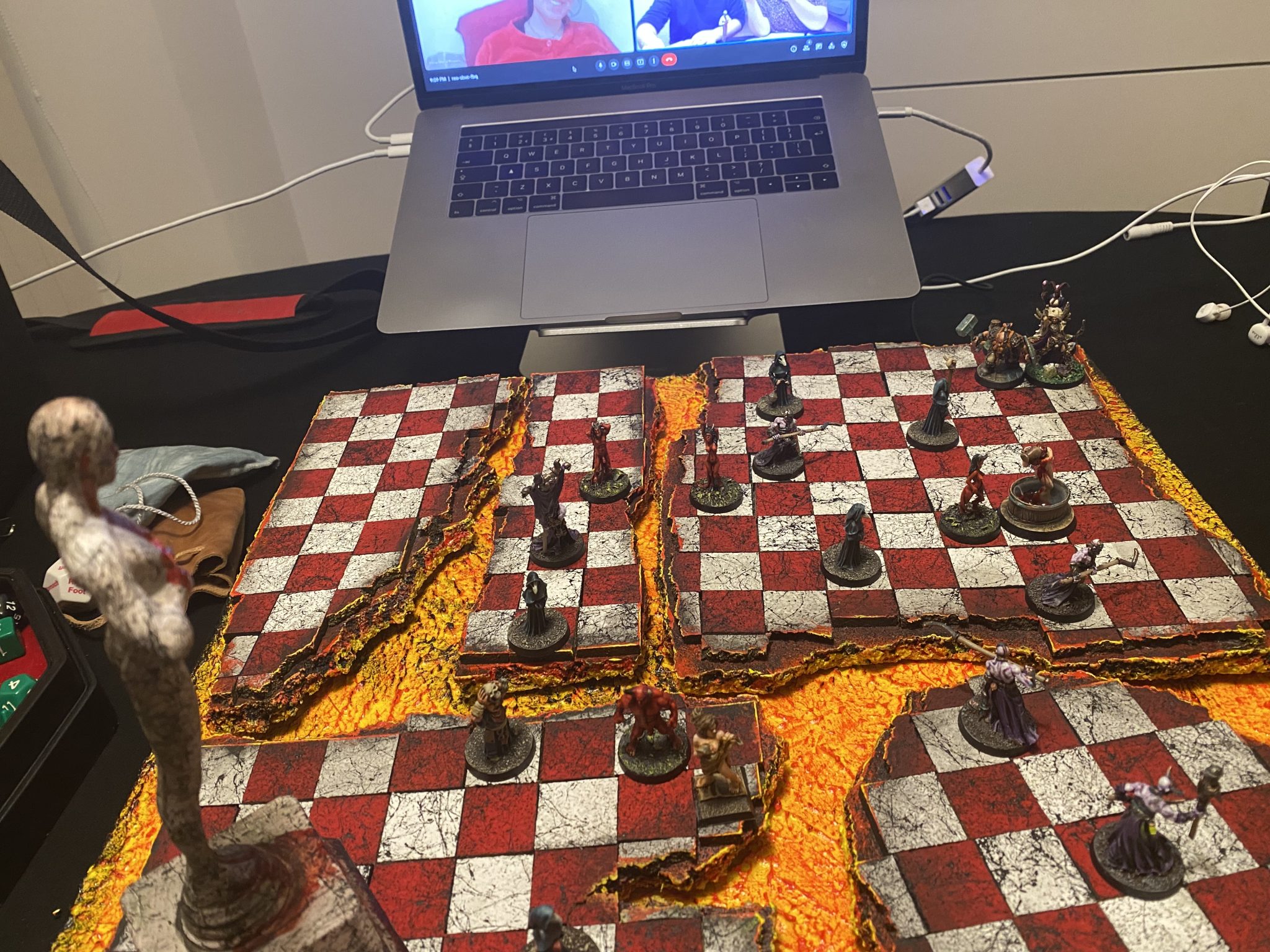 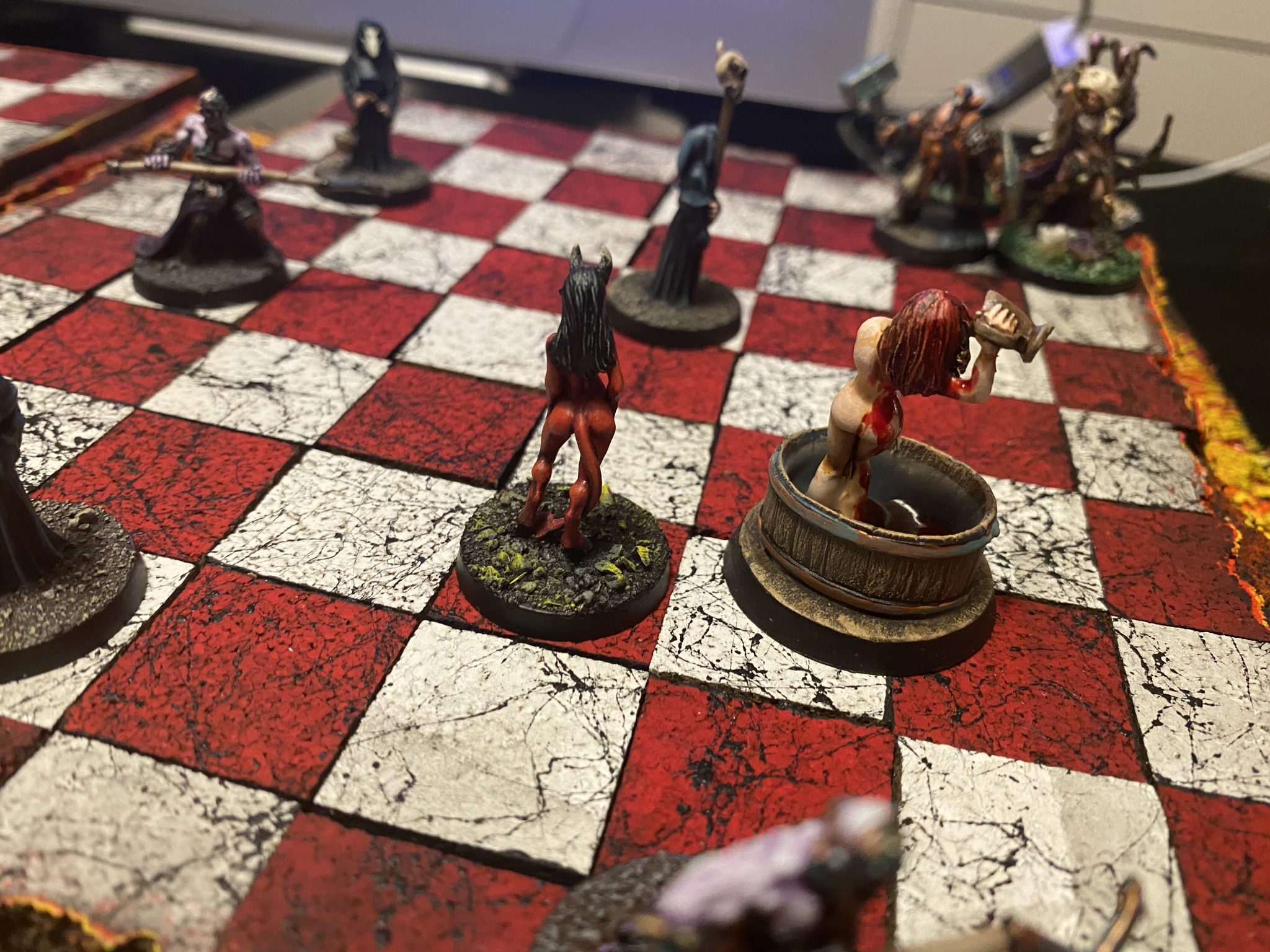 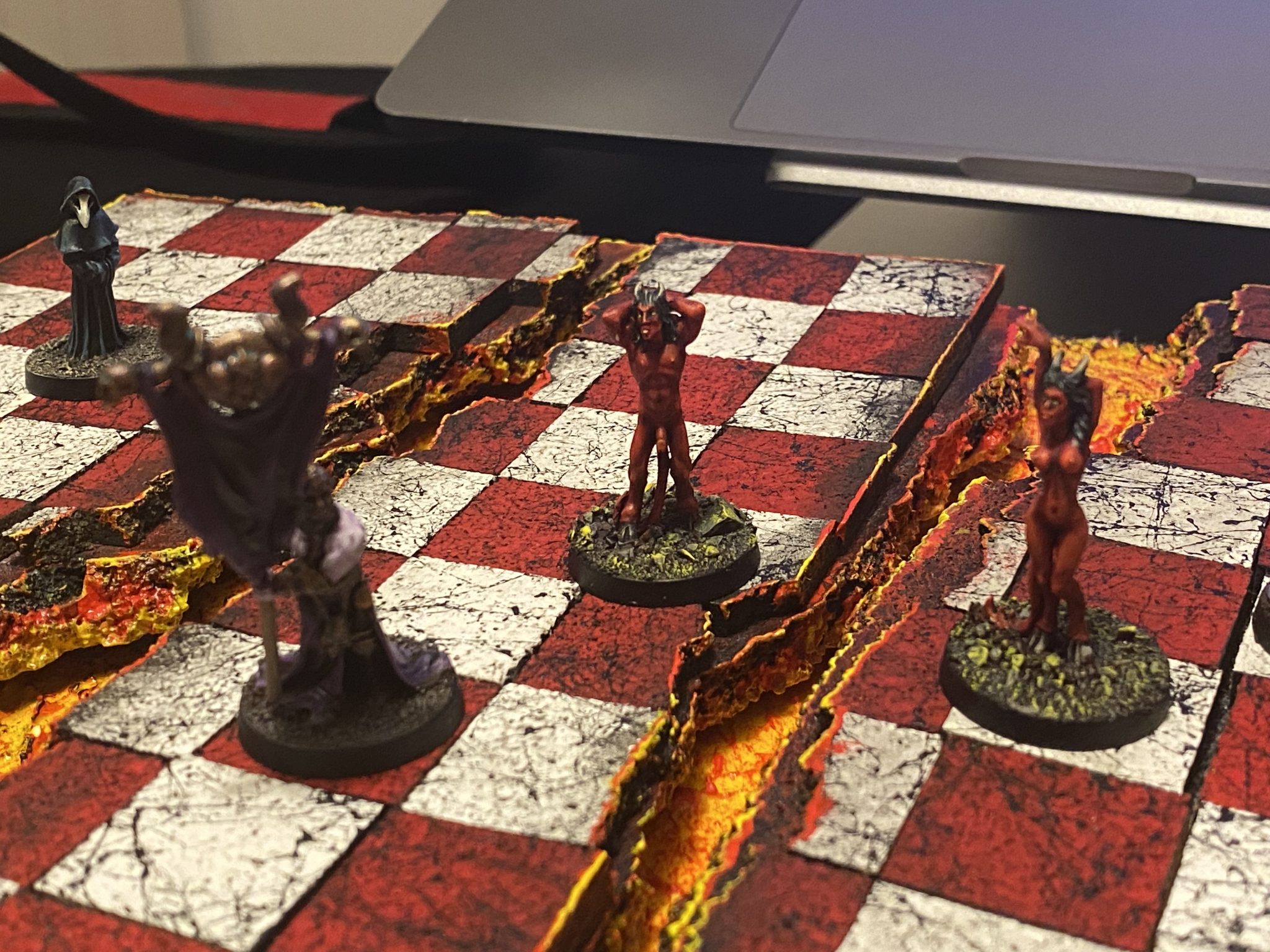 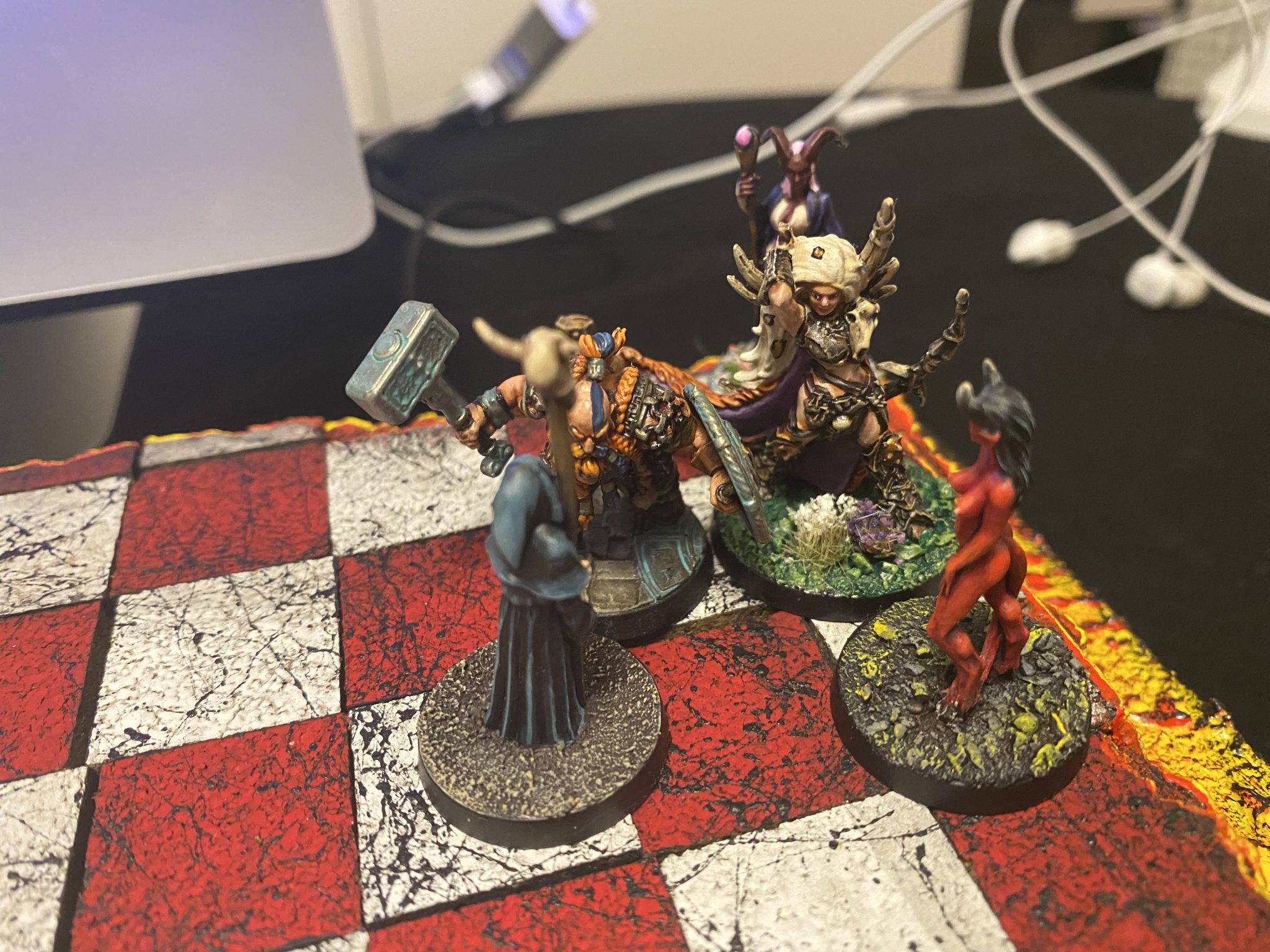 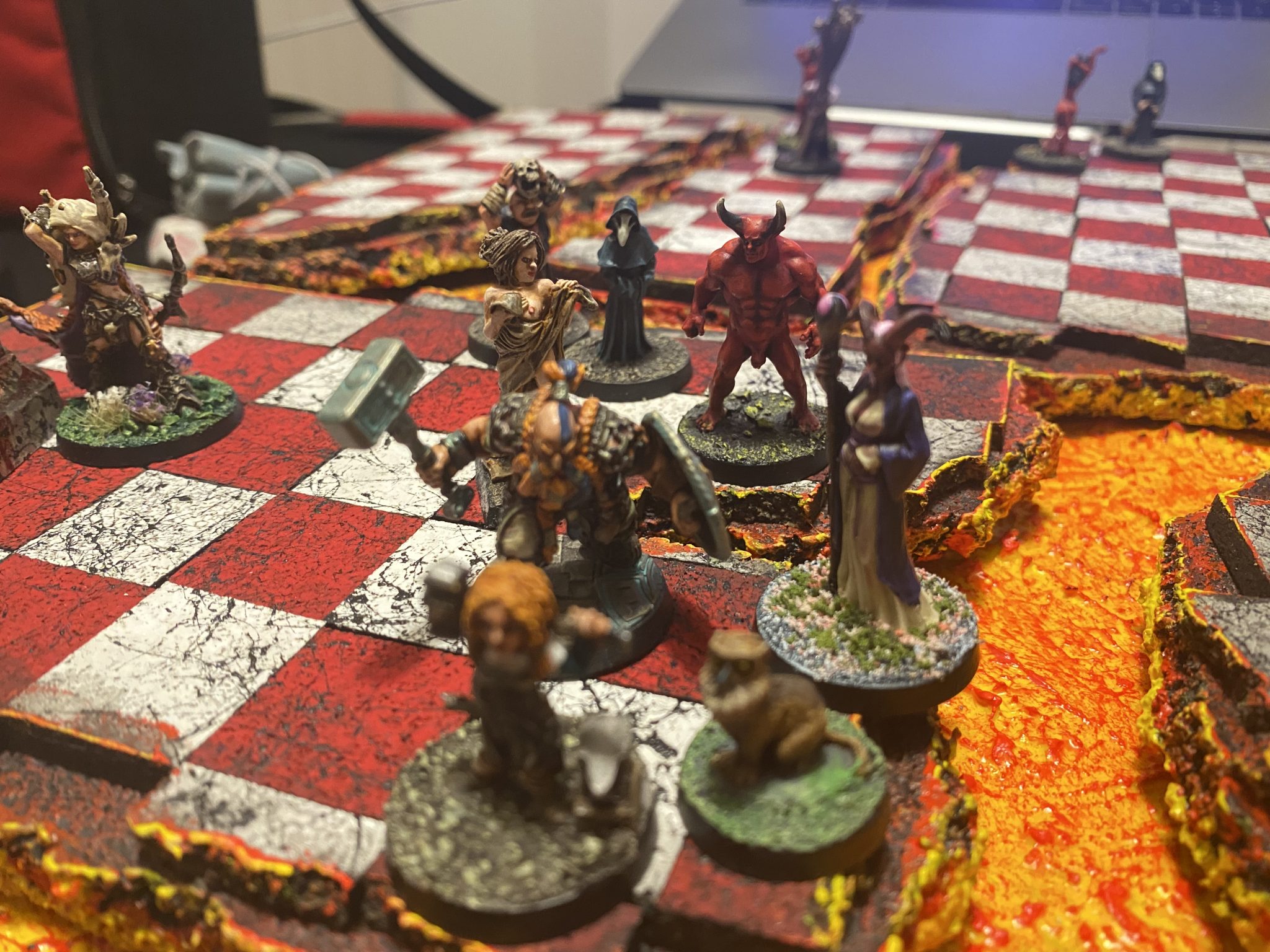 As the thumping sounds of the rave disappeared in the background, the heroes arrived at a counter with a hunchbacked devil bureaucrat, who they simply chose to ask where to find the Angel.

To their surprise, he grumpy but willingly gave them direction to the last cage down the long corridor full of cages with various creatures both known and exotic to the party.

At the end of the corridor, the party find an empty cage with their devilish butler acquaintance, James Brimstone, waiting for them.

After some debate, and Ms Gentlefeet skilfully removing the door to the cage, the party stepped inside to find the cage was an elevator leading further down.

Our heroes found themselves in a beautiful meadow with blue skies above, bird songs and pleasantly fragranted and tempered air.

In the middle of the clearing lay a beautiful woman, with vibrant emerald skin, white dress and large, white wings. An Angel.

She beckoned the party to step forth.

Confused, the heroes asked her about her condition as a prisoner to which she laughed surprised.

She explained she was not a prisoner. This was her home.

As the heroes took a seat, she started her story:

For millennia the Devils had held the Demon hordes a bay. Keeping them from flooding the world. Protecting all life.

However, while Devils fought and paid with their lives to keep the world safe, the Angels and other powerful beings of Mount Celestial did nothing.

Azrael and her lover Archon made a pact that they would no longer look on passively, but would travel to hell to help the Devils.

Secretly, they created a portal to Phlegethos, but as they were about to enter, they were interrupted by other Angels, who would stop them.

A fight broke out, and Azrael made it through the portal but in the confusion Archon did not.

As the portal closed the angelic lovers were parted.

And as she told her story, the illusion faded. The meadow slowly replaced by a dark cave with dusty, uncomfortably air, familiar to anyone who has ever visited Phlegetos. Her skin turned red, her feathered wings turned bat like and two horns sprouted from her head.

Still the same women, no doubt, but also utterly different.

No longer an Angel, but a Devil!

The Deal with the Devil

Alas, no resident of hell can conjure a portal to Mount Celestial. It is forbidden.

Azrael had summoned the heroes to help her.

She requires them to open a portal to Mount Celestial so Archon can once again join her.

In return she will not only fight to rid Dragonkeep of the attacking Demons, she will return the 19% of Seipora’s soul in her possession.

DM notes. I don’t think I have ever ended a game that left players that deep in thought. Love it!

Player quote of the day comes from Anna-Maria / Seipora:

“I regret my life choices!”

We will always have the memories… 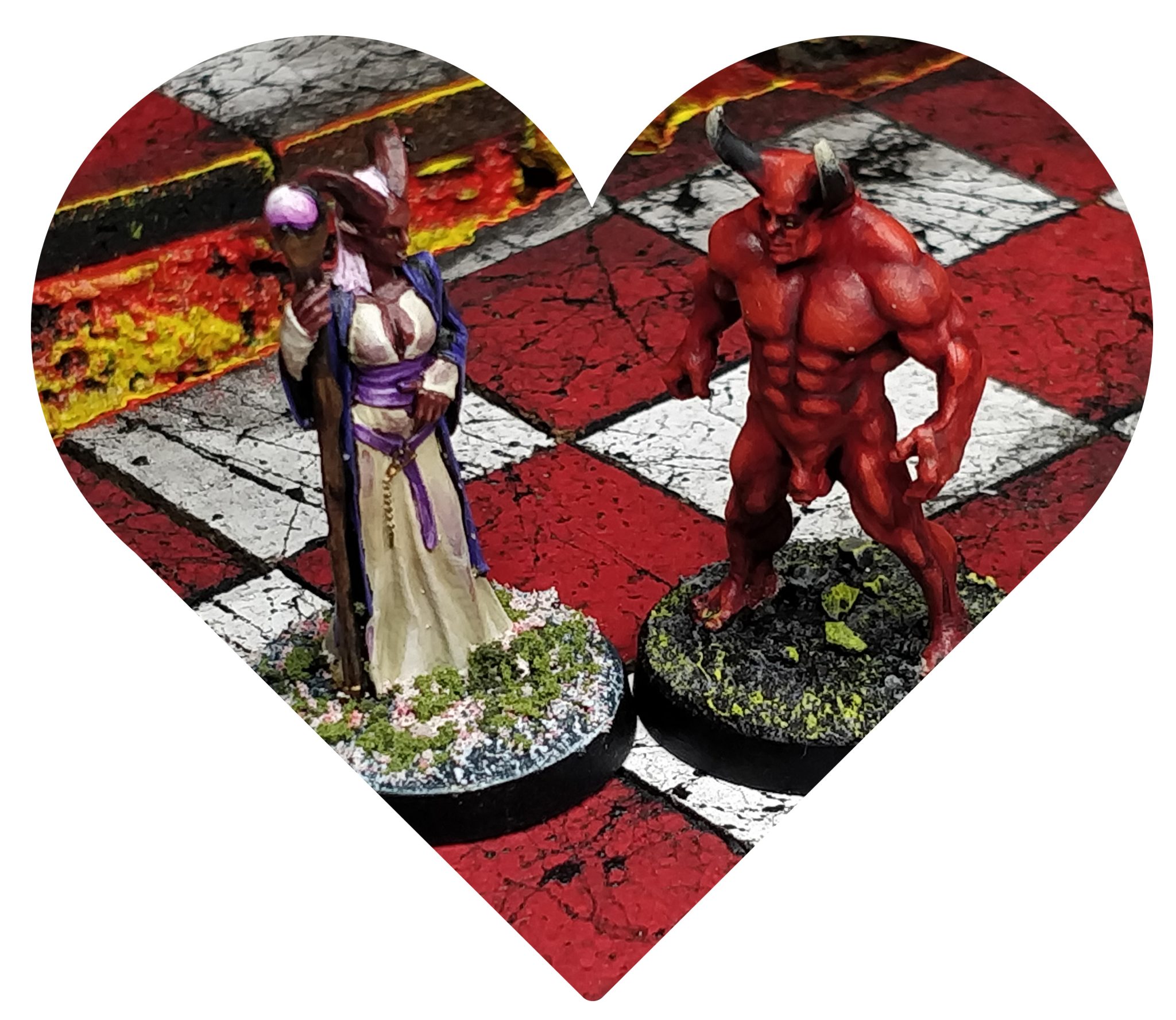