Bebbie had landed “Here Today.Gone Tomorrow”, the interplanar tavern in the middle of a celebration.

It was a celebration of the end of a war and a tavern full of drinks and coziness was just what the war-tired people needed.

The tavern was packed and the Staff was running around serving the happy patrons and too late did they realize guests visiting the toilet upstairs were not returning.

Starting with a drunk Halfling approaching Kasanov Kaboom, the Busboy, friends and families of guests who had visited the loo and had not returned in a timely fashion, started raising their worries with the Staff. 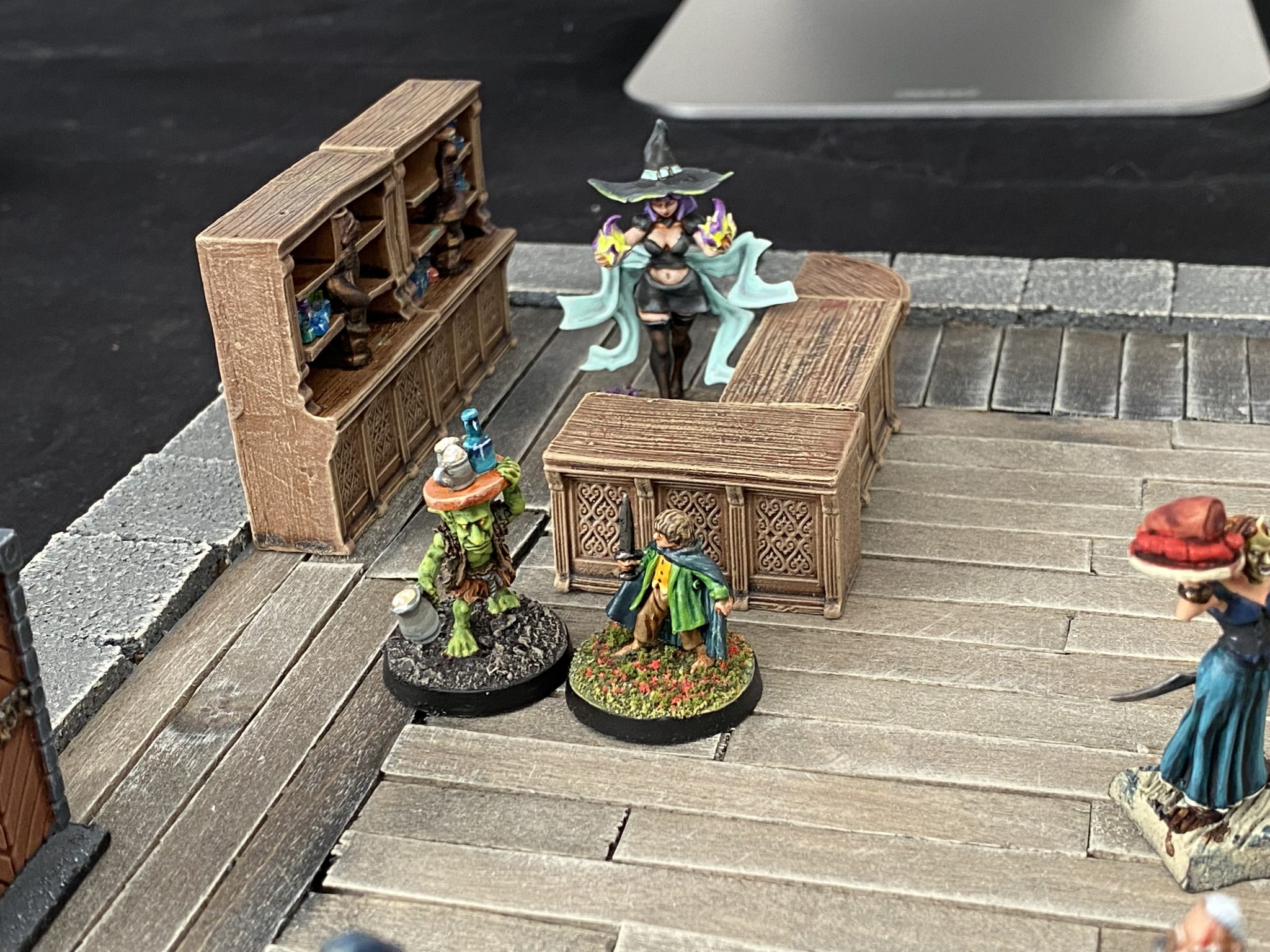 Papa Josephine, the Waitress / Rogue went up to quickly check, but found the toilet empty and unused. Kasanov Kaboom, the Goblin Artificer / Busboy (and designated toilet cleaner) followed to investigate further, but found no evidence of foul play.

The nervousness in the crowd grew and Bebbie decided to take on the crowd control itself (using a sneaky paralyse ray and charm ray here and there to help) while his Staff all headed up to investigate.

Kasanov grabbed a semi wet, chewed straw on the way and turned it into a “Chewed Straw of Magical Detection ™”

Investigating the toilet in details didn’t help much, but the Staff realised they actually had no idea how the toilet worked. And by dropping items in the toilet, they realised the items were just vanishing into a black void as close as half a meter down the hole. Using the “Chewed Straw of Magical Detection ™”, Kasanov could tell the black hole was a magical portal.

Kasanov, knowing what was coming, started to wrap a rope around himself and soon he was lowered into the portal.

The power of the portal pulled the whole team down.

The Staff found themselves in free fall for a short period before landing in a mountain of poo. Some landed at the top, while some landed closer to the edge.

All but Penny Purplesparks, was dizzy from nauseousness of the sewage smells.

To make matters worse a detachment of Mushroom People started attacking them from the ground. 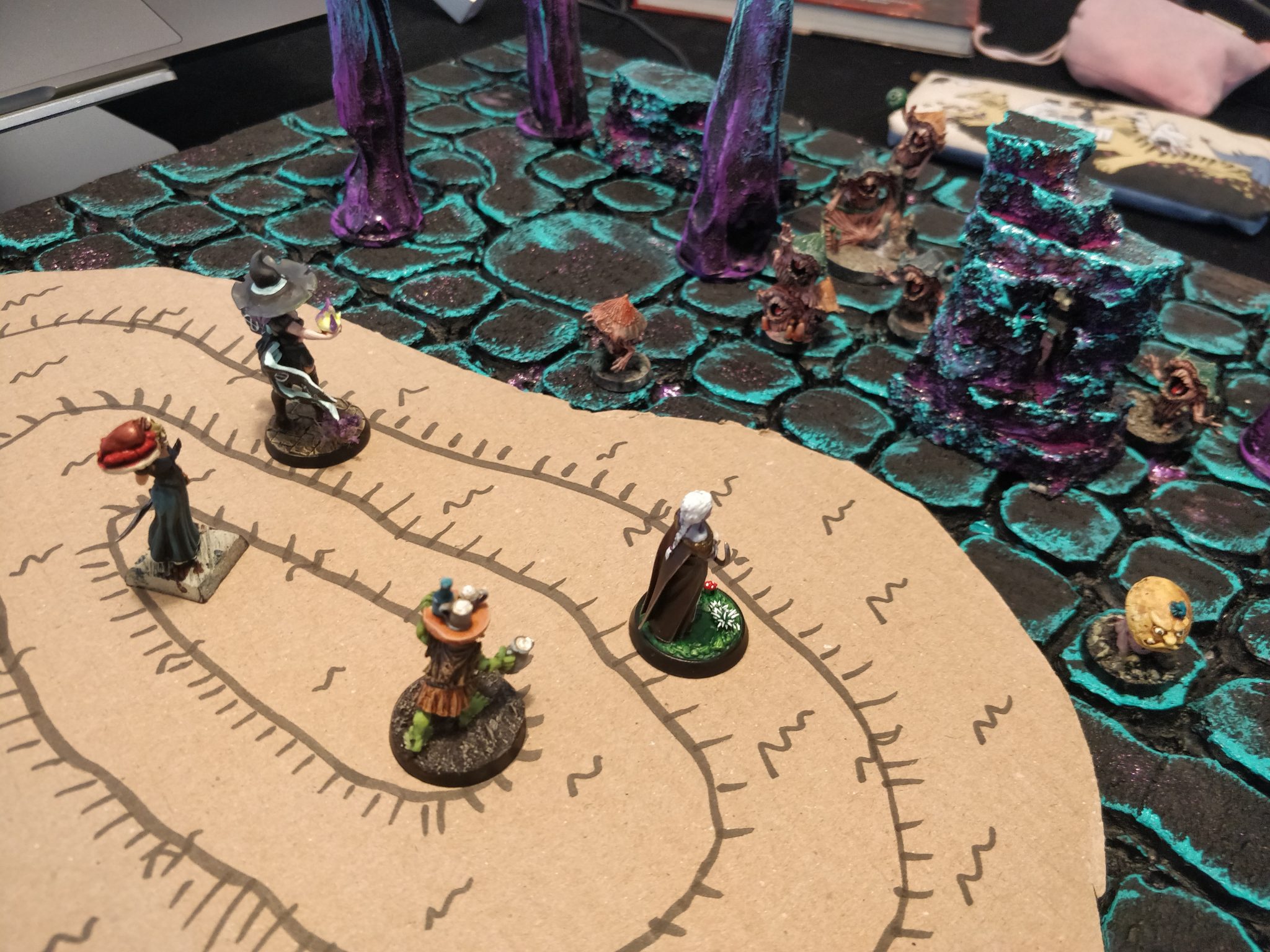 Walking through the mountain of poo, the Staff made their way down and out of the poo mountain while fighting the attacks from the Mushroom people. Alfein, the Drow Chef / Rougue was knocked out in the process, but was soon saved. 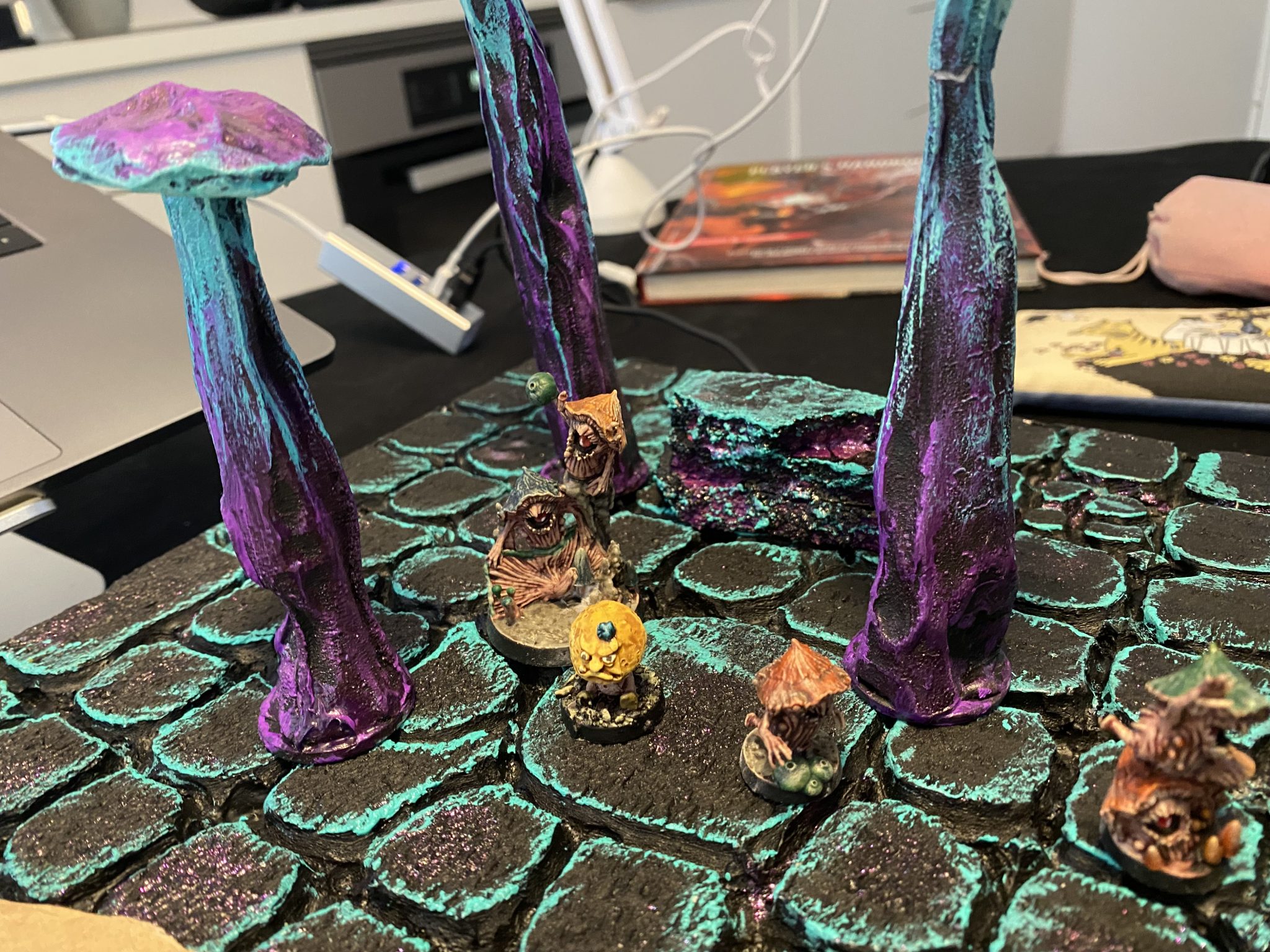 As they got closer, they started to realise through telepathic imagery the Mushroom people were defending their settlement from “The Defilers”, to them an evil force of alien beings who was attacking them from above with these strange biological droppings.

The Staff had gained the upper hand and decided to retreat to reassess.

As they moved away, they had mental images of them in prison with the missing guests, sent to them telepathically as a warning from the Mushroom people.

Where are we and what is going on?

Alfein could tell the Staff that they were in The Underdark, although this area was unfamiliar to him and there was no sight of the designs and architecture of his kin, the Dark Elves.

Kasanov, having spent the most of the battle climbing down the mountain waist deep in poo, had had some additional insight has he had held the “Chewed Straw of Magical Detection ™” in his mouth and that had sent him a tingling sensation, which he first thought was from the portal, but later realised also had a second, weaker signal of magical residue from a magical device no longer there.

Lost, the Staff decided to make it into the Mushroom people’s settlement after washing themselves of the poo.

On the way they passed Mushroom People seemingly moving stuff, but without paying attention to the Heroes.

In the settlement, it became clear the Mushroom People was leaving, forced away by both the mountain of poo, but also by the fact that several of their kin had disappeared recently in a nearby tunnel.

Through some challenging questioning using telepathic imagery, the Staff learned of a man who had tried to buy whatever magical device had been up by the portal.

However, the Mushroom People interpreted it as the man wanted to trade pieces of yellow rock for air and thought he was crazy.

The Staff decided to investigate the tunnel from which Mushroom People had gone missing.

Here they found a monster guarding the path: An Ogre fused with Mushroom. An abomination for both humanoids and Mushroom People alike. 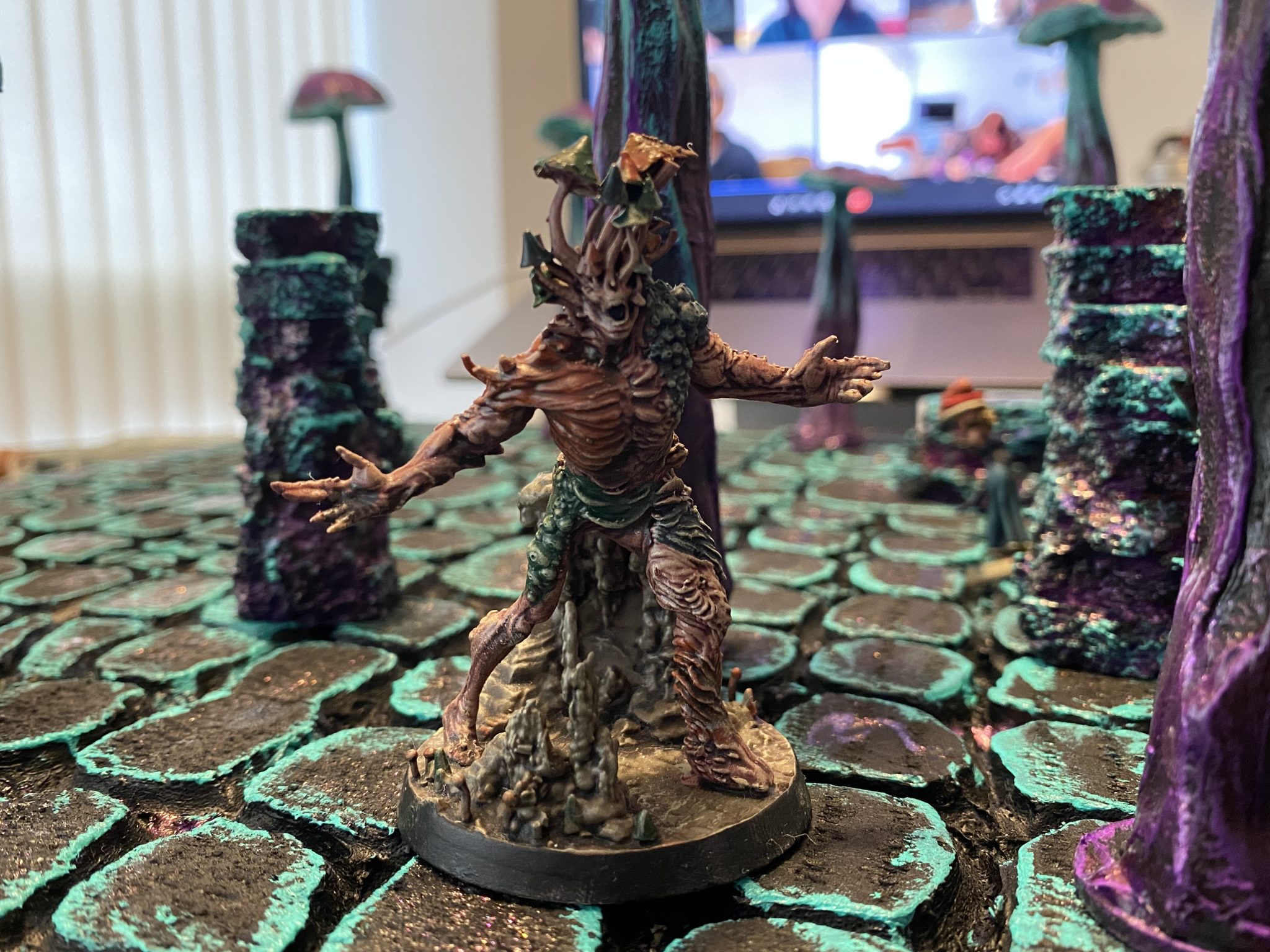 The Staff decided to coordinate their attacks, forst with a double Sneak Attack by the two Rogues, who then disengaged and ran for cover while the two Magic Users popped their heads out to bombard the Abomination with magic artillery. 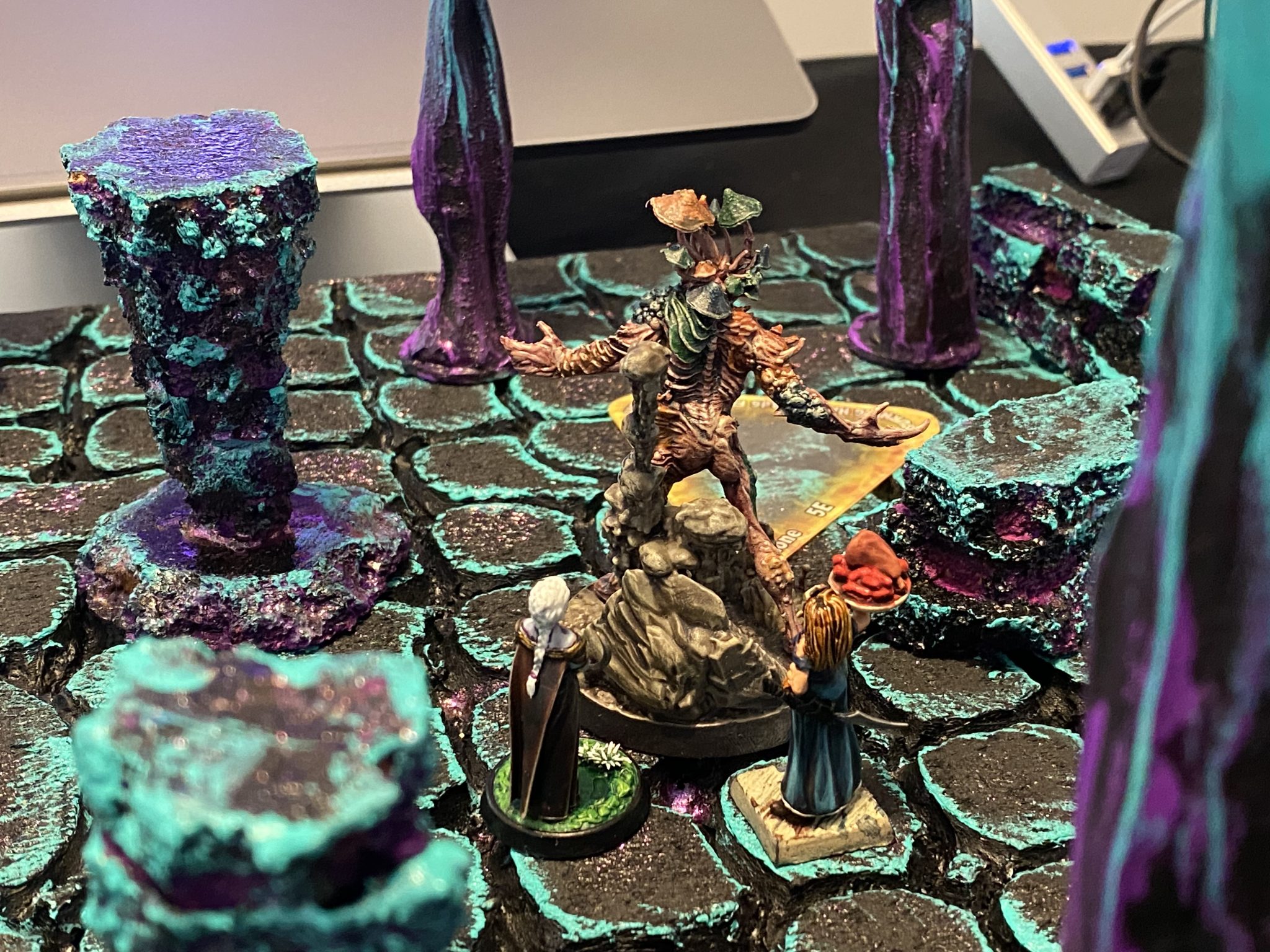 Furthermore, Kasanov Kaboom, used his Goblin skills to move unseen away from his location by the entrance.The Abomination not noticing the move, went to the entrance searching for the culprit.

This gave the party free run for the exit, but not wanting to leave the monster to do more damage to the Mushroom People, they decided to continue the fight and bring it down, which they did. 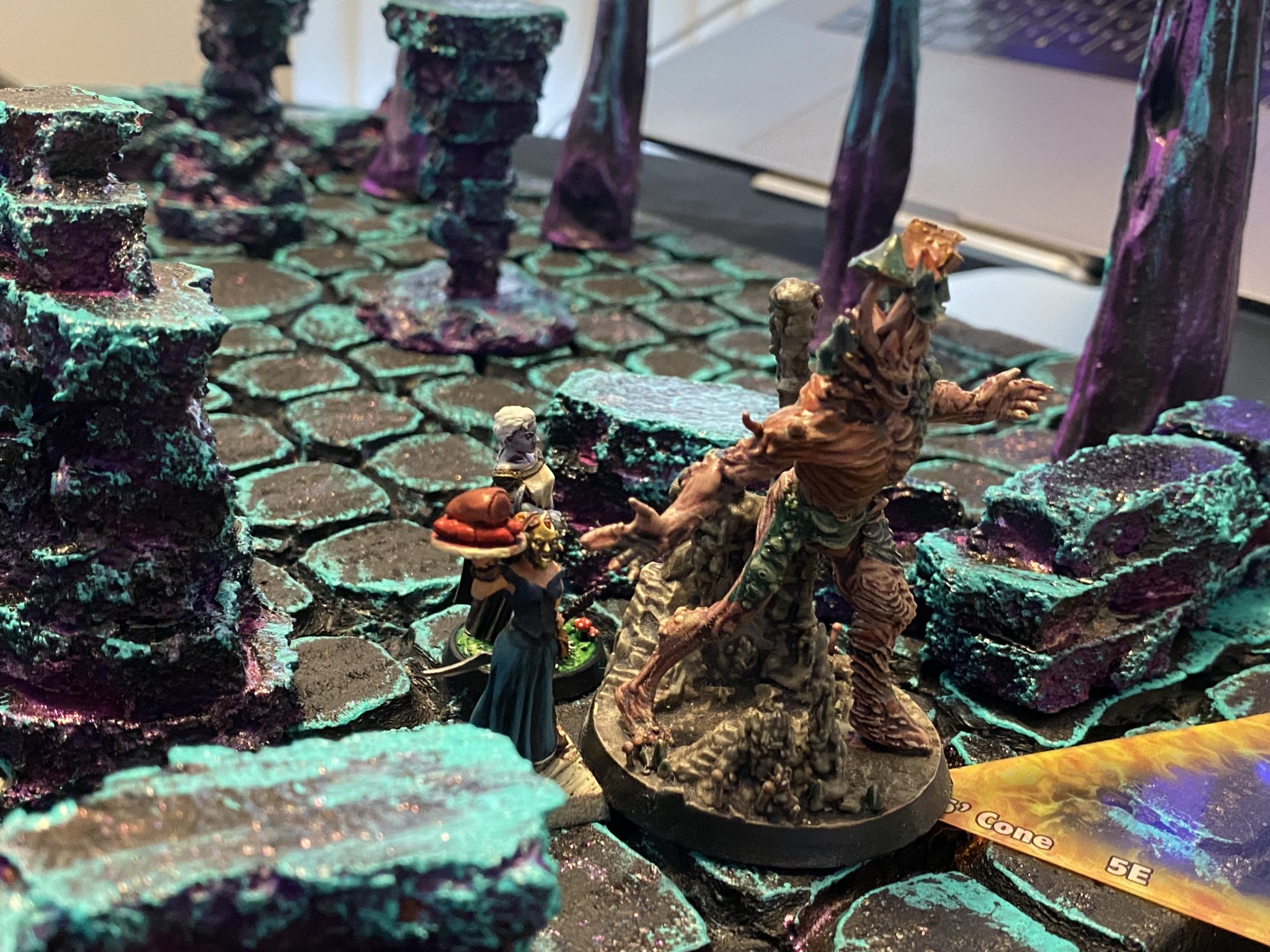 At the end of the tunnel, the Staff to their surprise found a beautifully carved stairway that led up to a beautiful room with a river of lava cutting across. 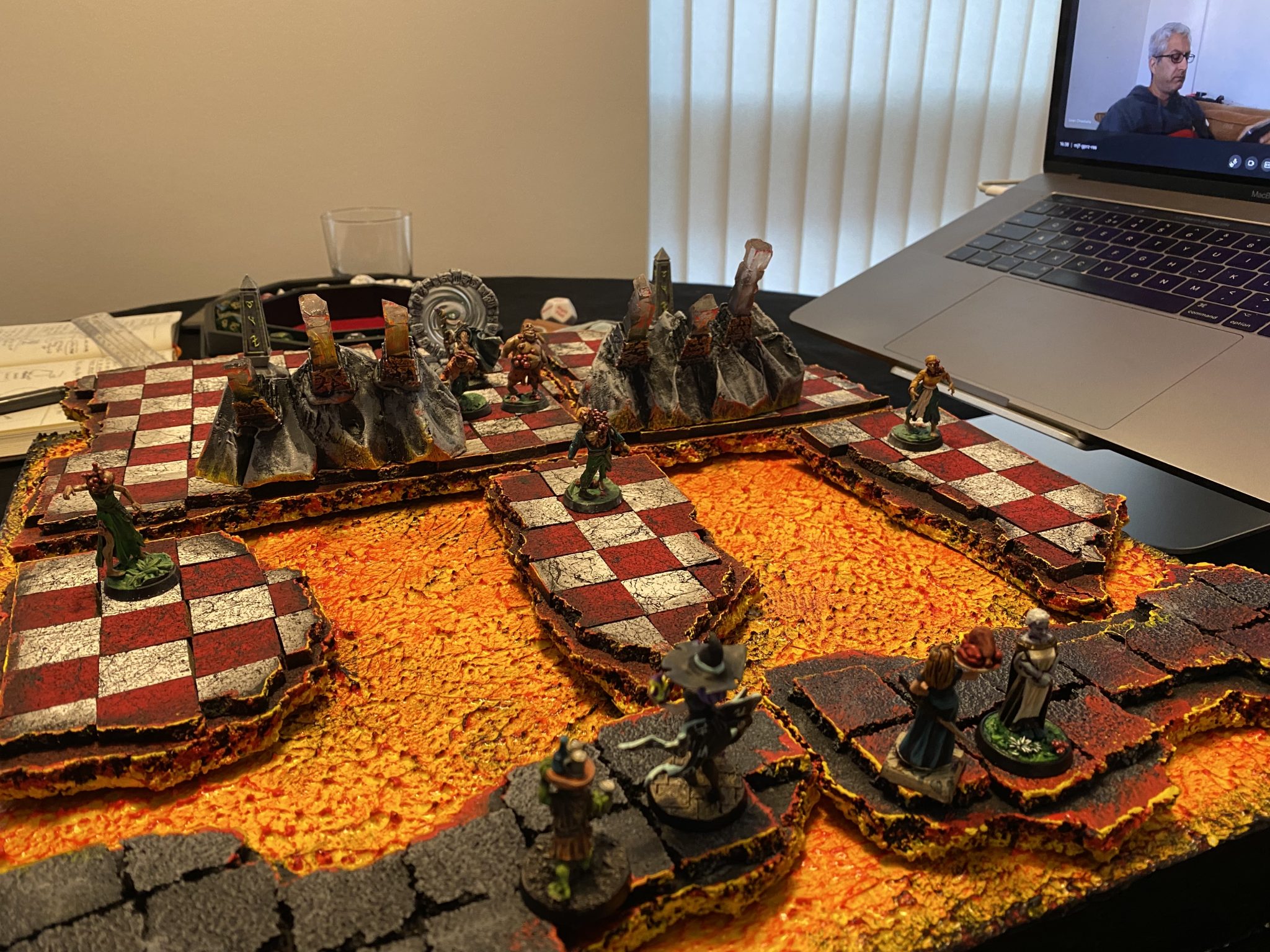 Penny, being invisible, snuck in to get the lay of the land: Three short bridges cut across the lava, each guarded by mushroom infested ex-guests of “Here Today. Gone Tomorrow”. 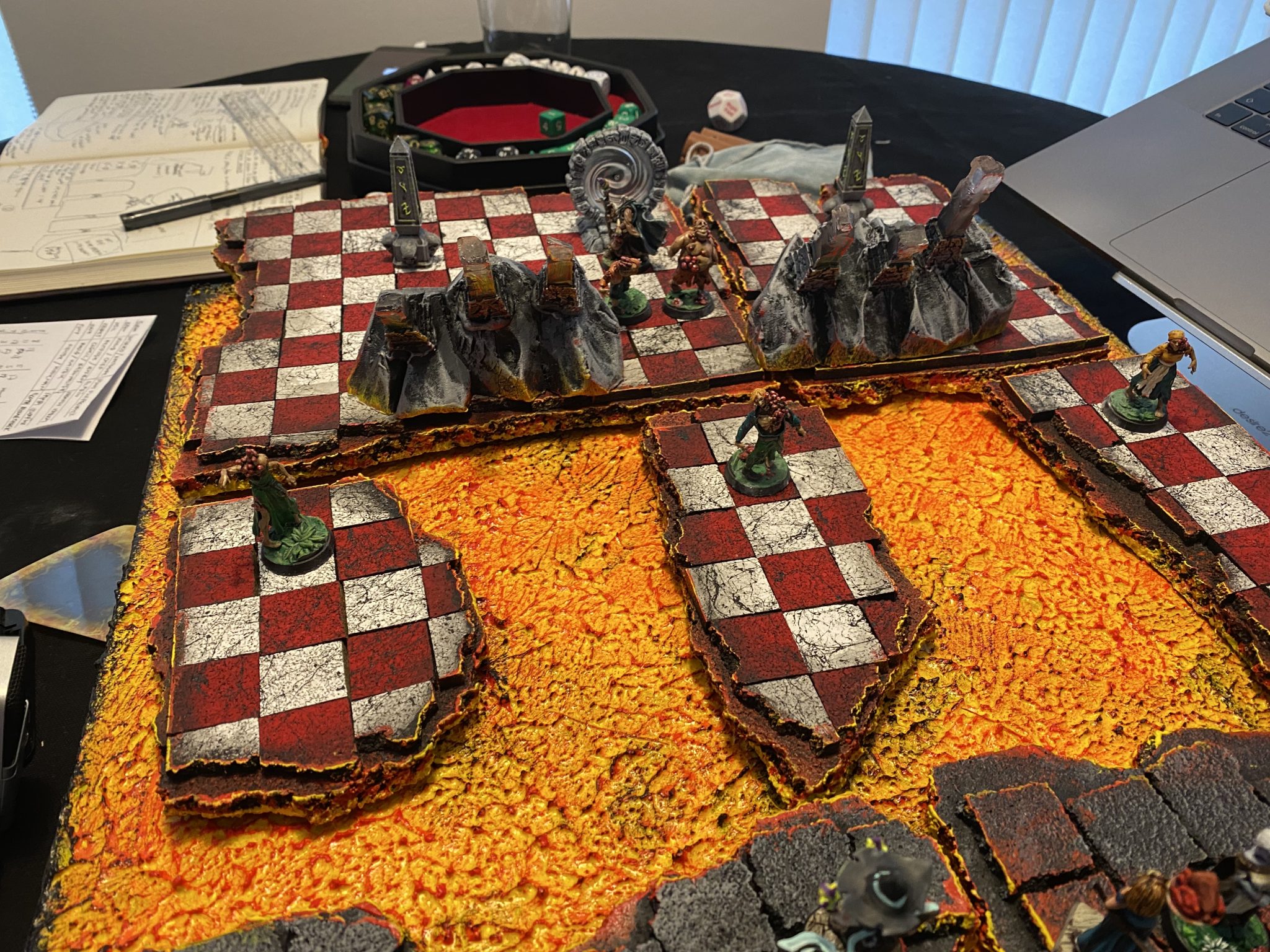 Two more guarded the centre at the far end, where a person was chanting magical formulas in order to drain energy from the magical device to funnel it into an item. He was creating a magical weapon! 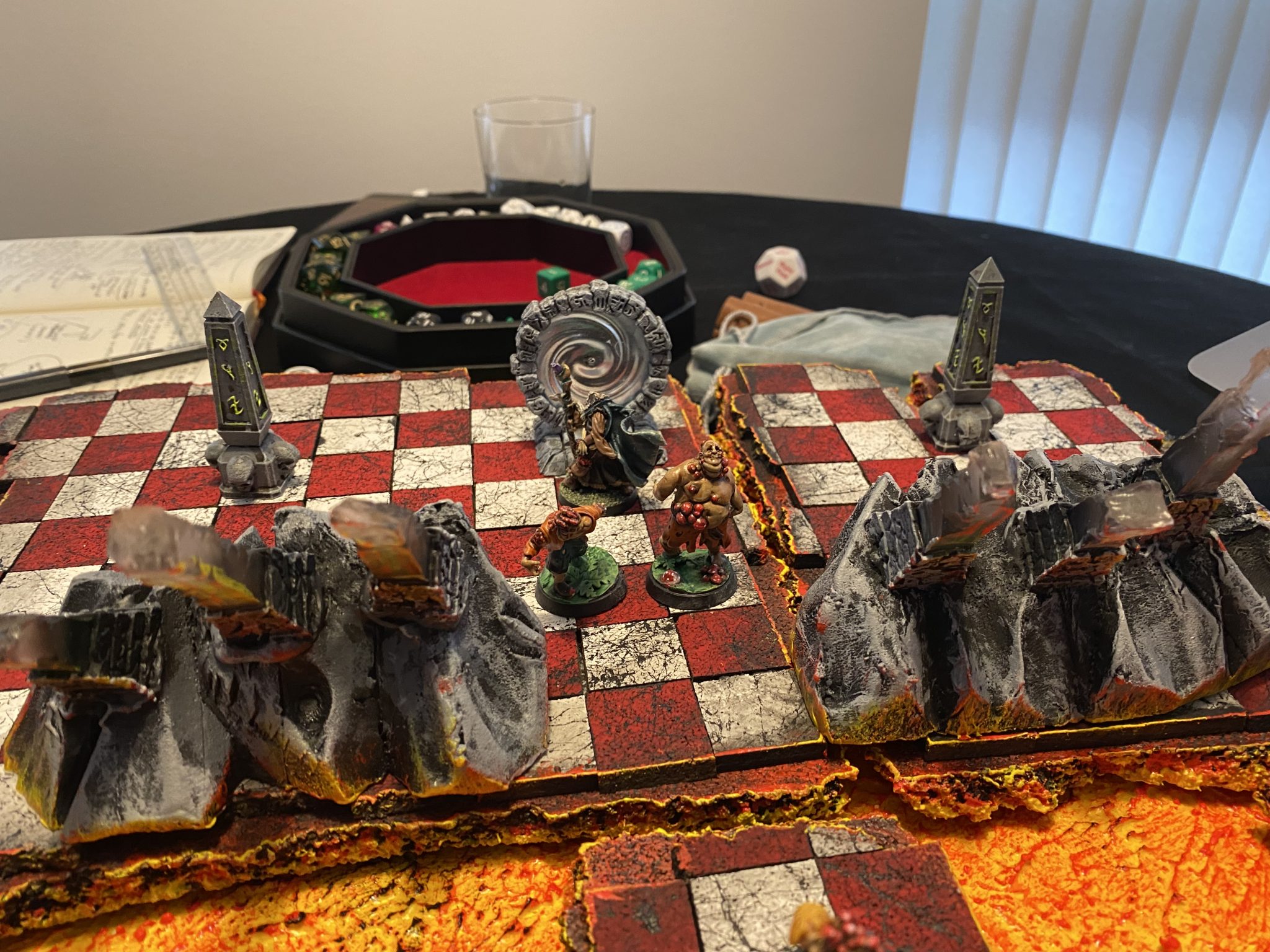 The Staff went for a two pronged attack down either side of the room, with Penny being invisible sneaking all the way up passed the Mushroom Zombie on her side, while Alfein and Papa Josephine, the two Rogues battle a Mushroom Zombie who simply wouldn’t stay down.

In the end the Staff battled their way up to the Wizard, but time was against them as he was putting the final touches on the weapon. 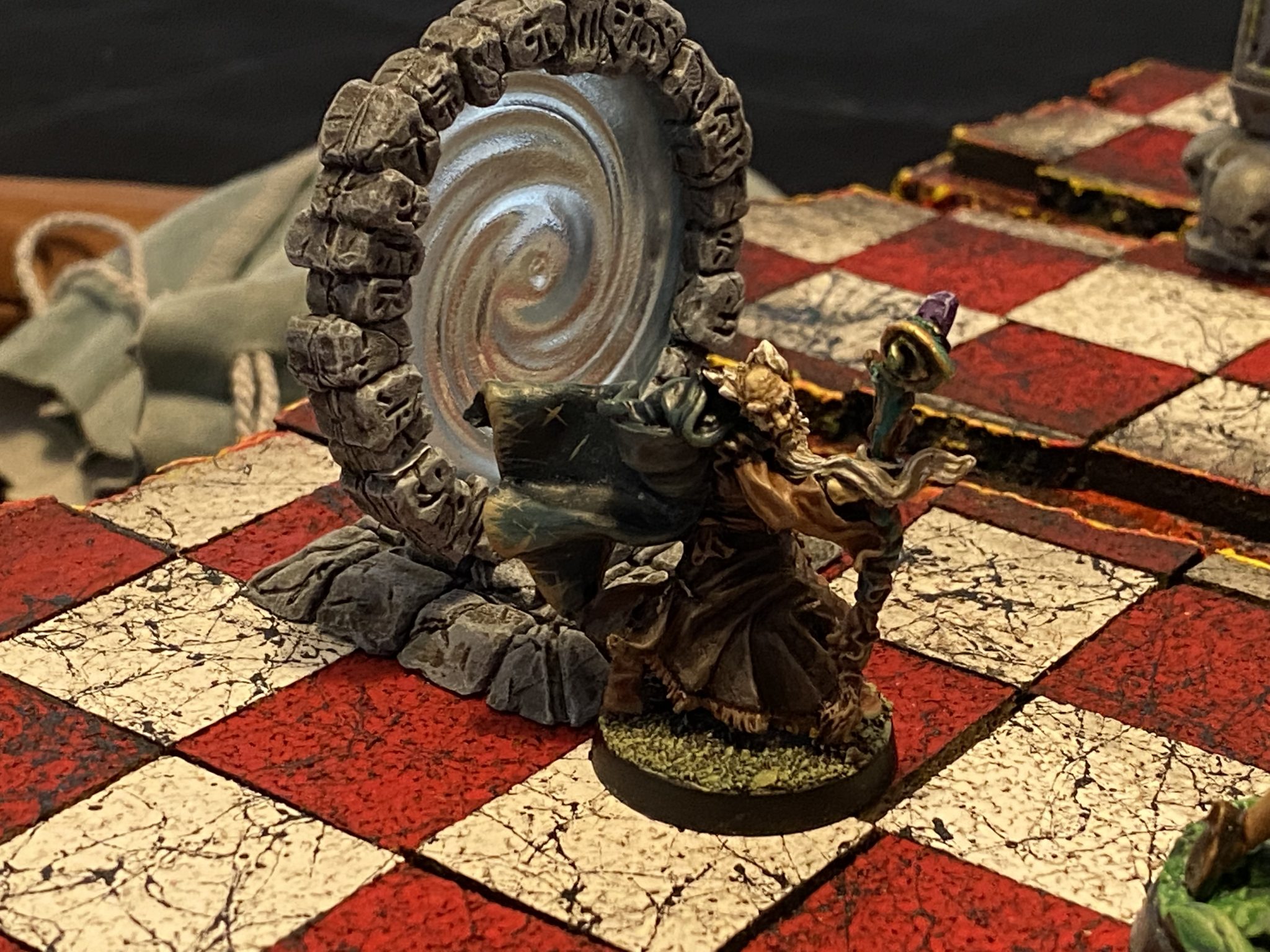 They gave it all they had bombarding the Wizard with weapons and spells, but with protective spells in place, he lived.

In the end Papa Josephine ran up to try and bring the Wizard down, but alas he remained. Wounded but still standing and still concentrating on the magic spell sucking the magical energy into the weapon. 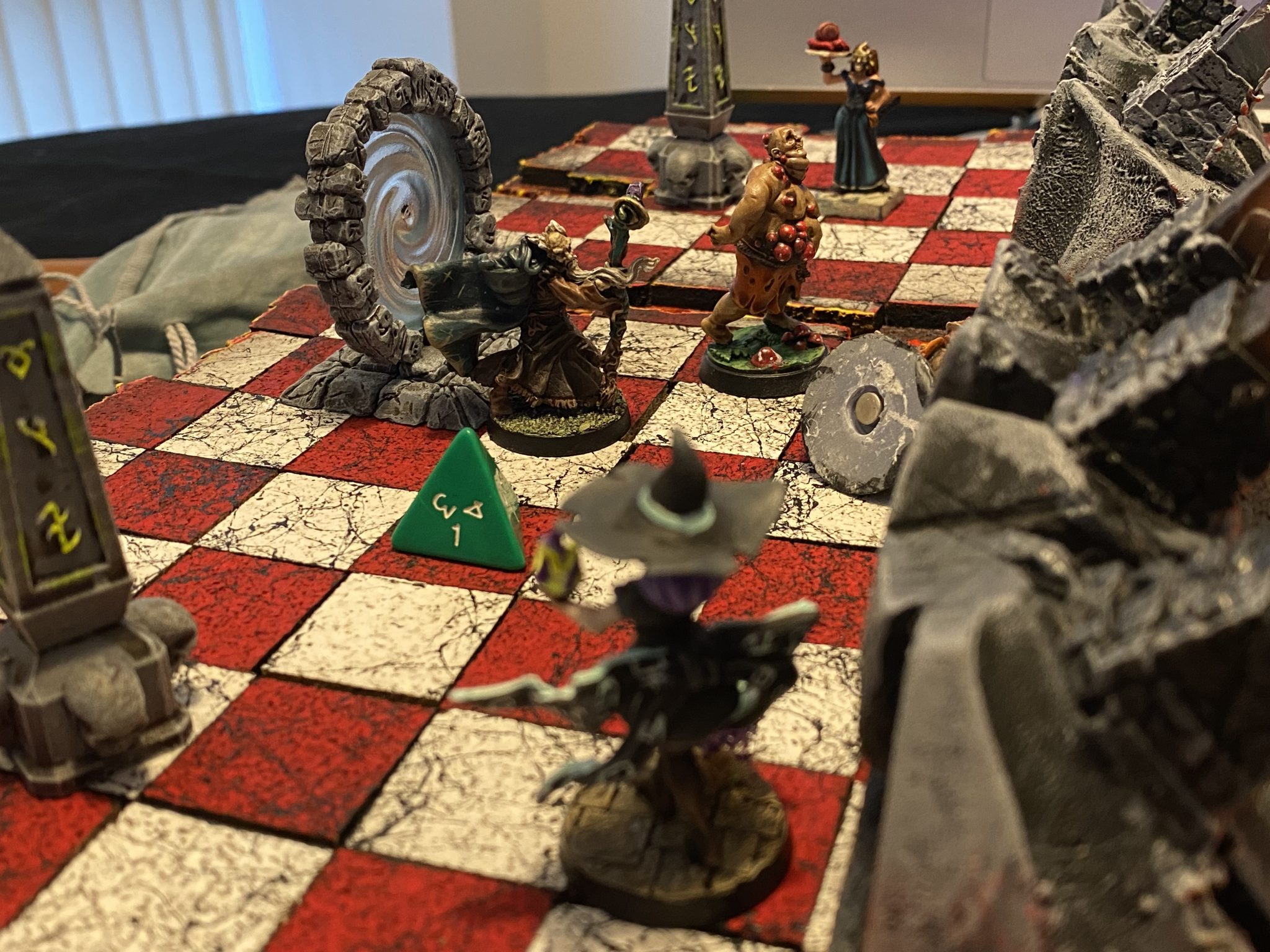 Triumphant he yelled “You are too late. My Dagger is almost done!”

But Penny, Purplespark, our Bartender / Wizard, deciding to bypass his magic barriers, cast a Sleep spell on him.

DM note, we hit an interesting moment here at the Wizard and our Rogue were locked in combat so it came down to who had the lowest Hit Points as the Sleep spell works in ascending order. Papa Josephine had 12 Hit Points left… the Wizard had 10! However, with our Wizard rolling 27, both fell to the ground asleep.

As the Wizard and Papa Josephine collapsed on the ground suddenly fast a sleep, Kasanov took no chances and ran up and quickly stabbed the Wizard to make sure he would not wake up…ever again.

Dm note. This was so close. If the Sleep spell had failed, the Wizard would have successfully pulled all the magical energy into the Dagger.

It turned out the magical energy was a Disintegration Portal.

The Mushroom People returned the surviving guests and both Staff and guests headed back up the Loo Portal and yet another day had passed in the interplanar tavern. 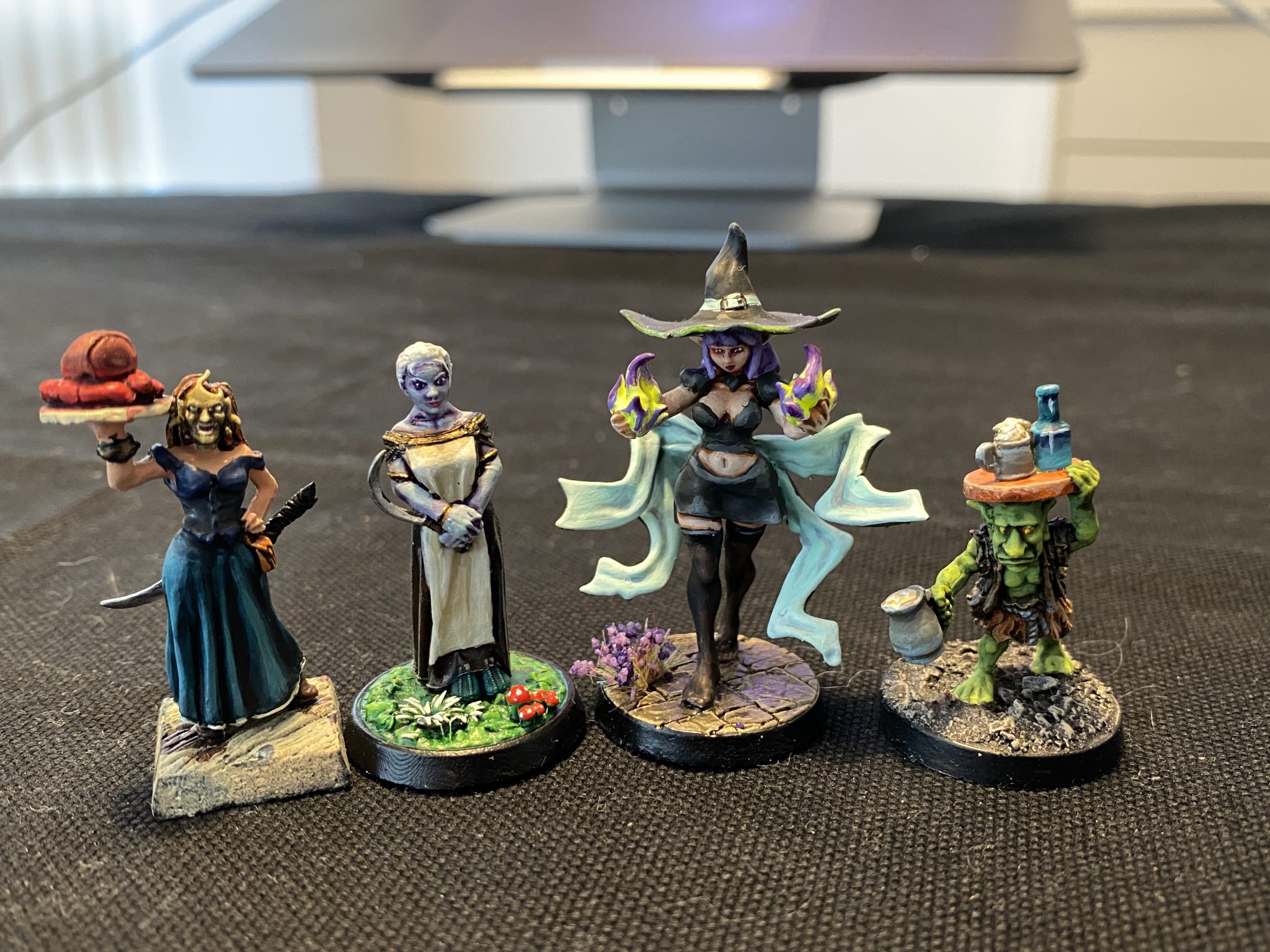 How you roll with disadvantage 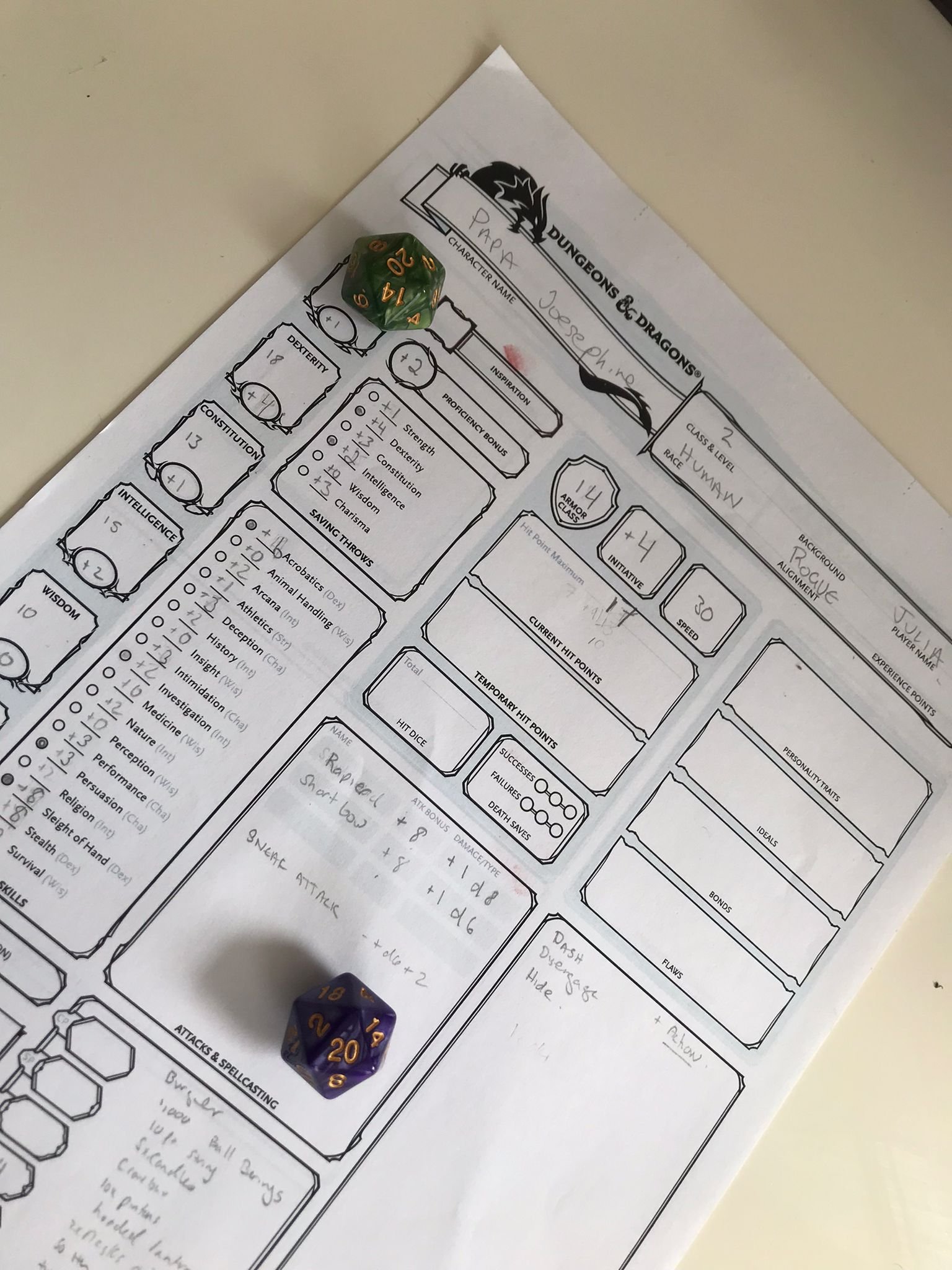