DM notes, I wanted to dial up the danger level of our game to challenge the players so I planned a game of epic encounters with new unfamiliar challenges, one being an invisible foe, the other a flying foe.

Really happy with the result, although we cut it a bit close with one hero failing two Death Saves.

Having heard Azrael, the Fallen Angel’s story, the heroes decided to help create a portal to Mount Celestia to allow her partner, Archon, to join her in her desire to help the Devils fight the Demons.

in return the heroes would not only receive help to fight the Demon hordes attacking Dragonskeep, they would also see the return of Seipora’s soul (the 19% that Azrael was in possession of).

Azrael, keen to help the party, explained that while residents of Hell were forbidden to open portals to Mount Celestia, visitors like our heroes could and there were two ways she could think of:

Finally, she gave Seipora, the Tiefling Sorcerer, a feather from the wings of Archon. The only one she had. This would be needed in either case as a tuning fork to open the portal to the right plane and place.

After a short discussion, the heroes decided to find the existing Colour Pool as it was mechanically the easiest to active as it meant simply throwing the Feather of Archon.

As the party made their way through Skid Row to leave Abriymoch, at a junction between the buildings, Kaari, the Ranger, was hit by a bronze crossbow bolt, almost paralysing and killing her. 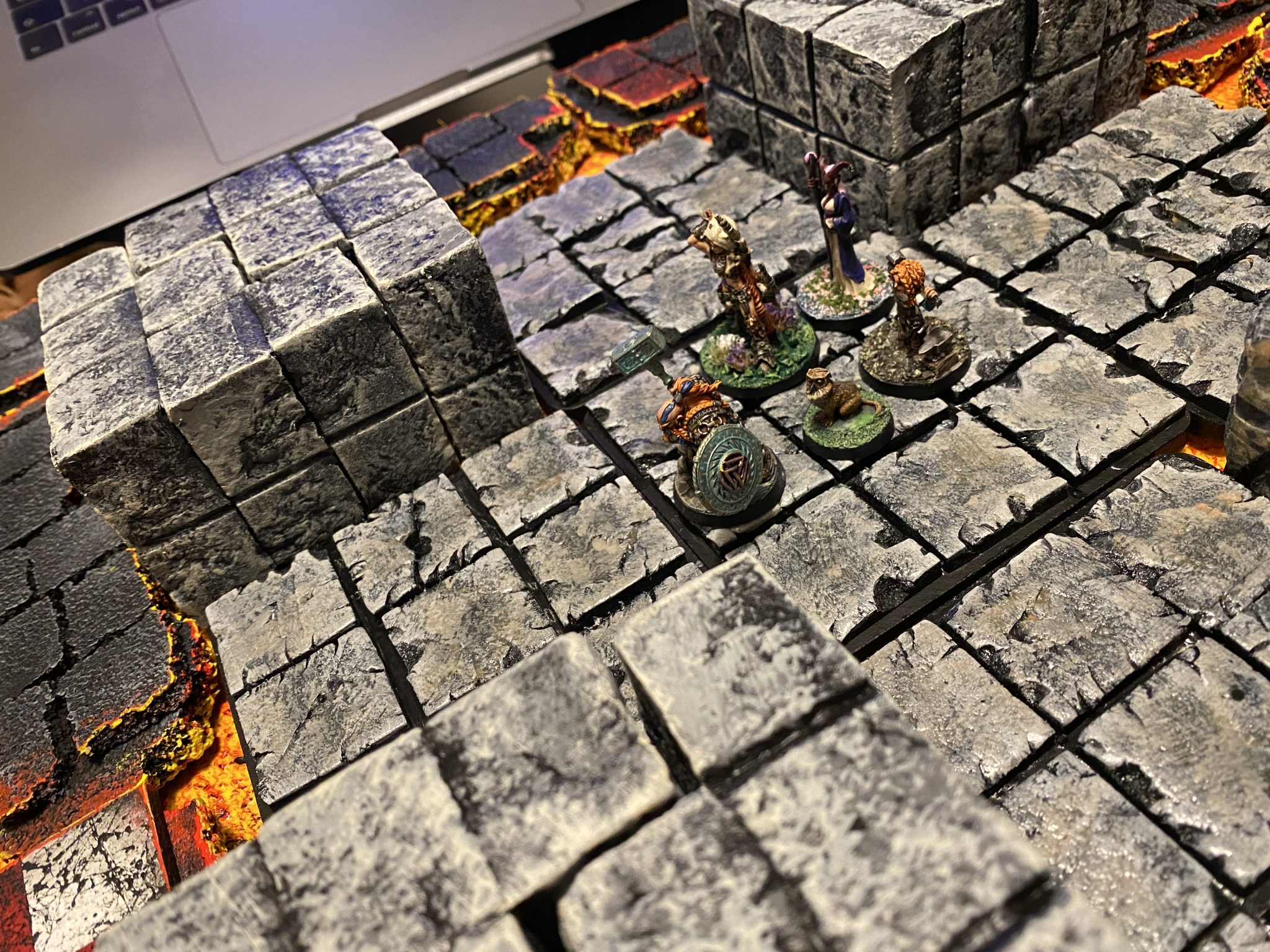 But her adventure-worn body took the hit and further more, she kept her wits to identify which rooftop the bolt had come from.

The party could hear the culprit jumping off the roof at the back. Kaari, adept at climbing, jumped on the roof and saw a huge  Orthon, a breed of Devils tasked with hunting down prey. A Bounty Hunter of Hell and the very same they had seen investigating the riderless Night Diligence the party had stolen Soul Coins from. 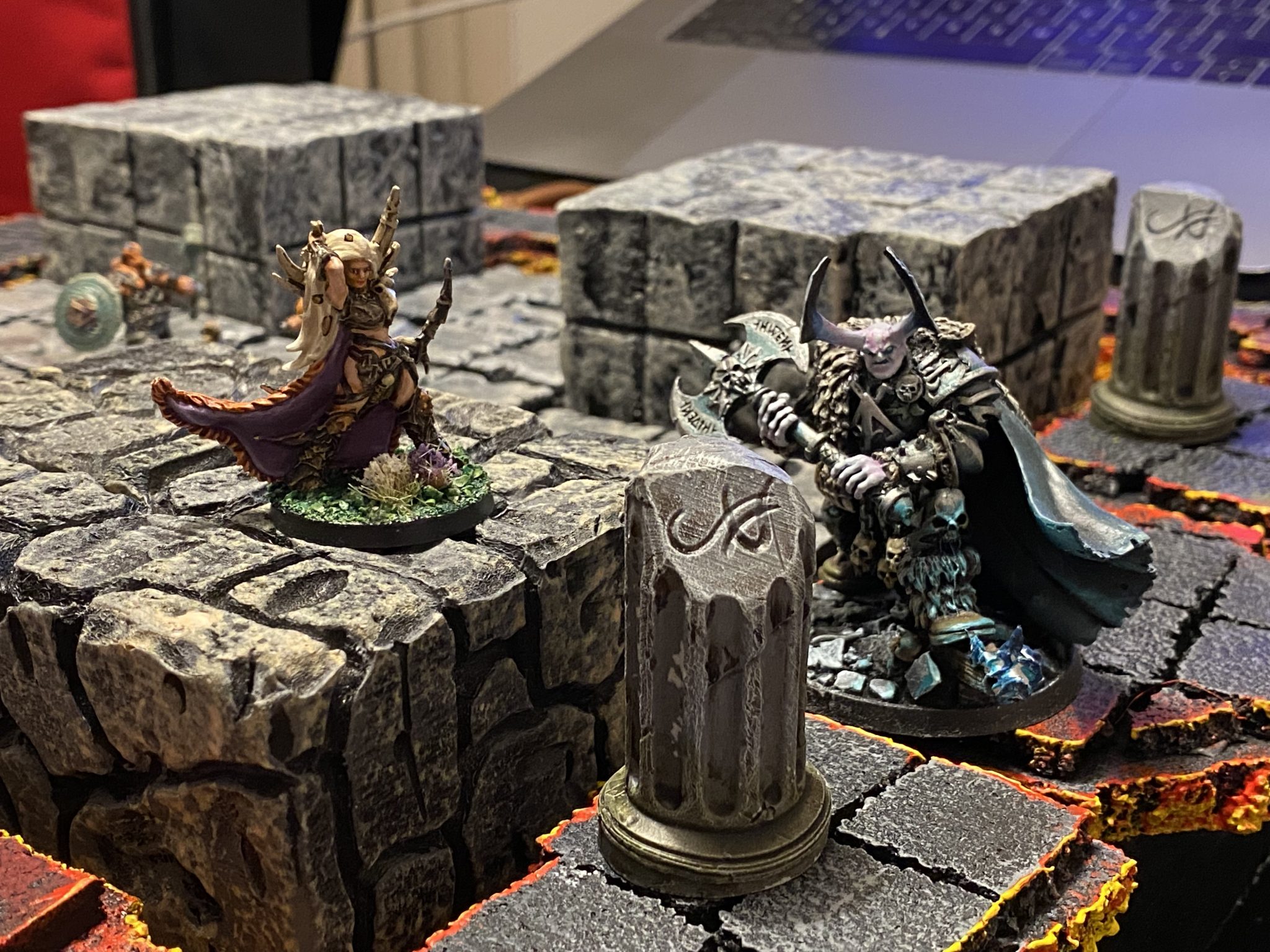 Kaari fired arrows at the Devil and Seipora running around a corner summoned her Wild Magic to increase the damage potential of her Fire Bolt. Unfortunately, the Orthon was immune to fire damage. But Seipora, blessed by the Wild Magic, turned invisible protecting her from the gaze of the Orthon. 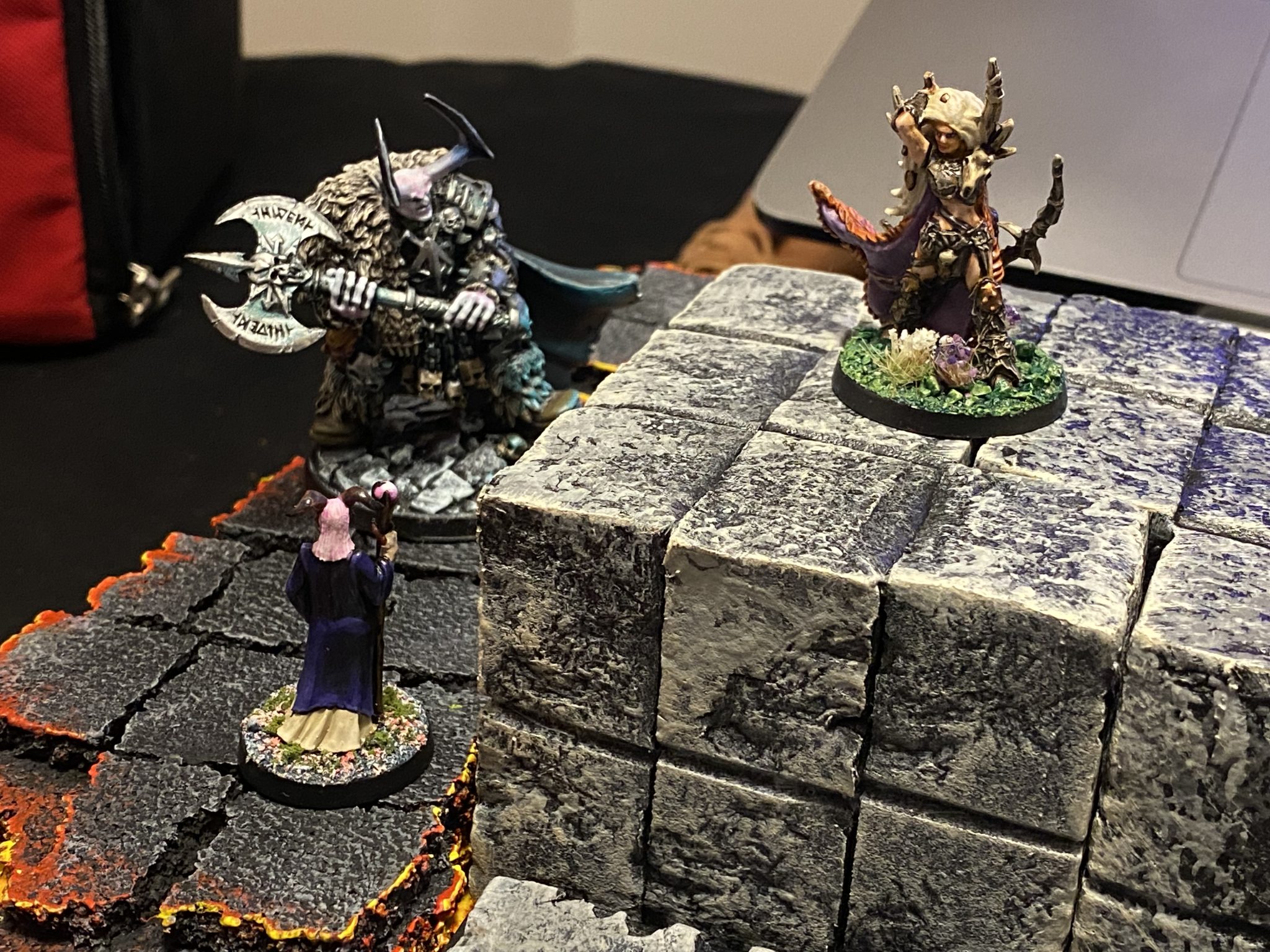 Thorga, the Dwarven Paladin, had just made it to the frey when the Orthon rushed away turning itself invisible. Kaari, following the logical path of the invisible foe, jumped to the next roof, where she was shot at again, but this time, she dodged the crossbow bolt.

Having fired his bronze crossbow again, the Orthon had made a tactical mistake shedding his invisibility and Kaari rained a Hail of Thorns down on him and with both Seipora and Thorga appearing, the Orthon decided to retreat and disappeared in between the buildings. 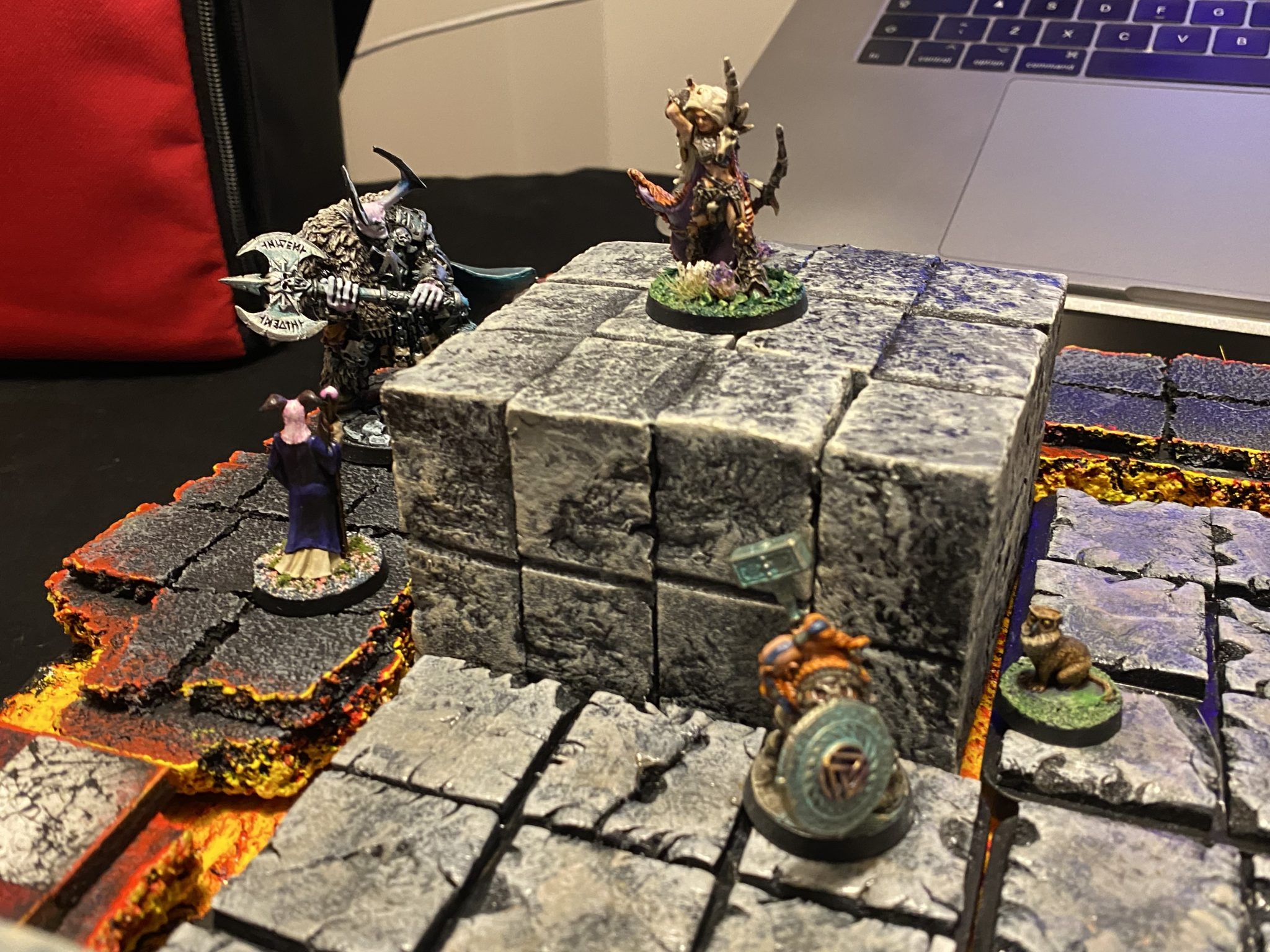 But the heroes now know their theft had been discovered and they were being tracked!

Half a day trek later, the heroes spotted a little rock oasis with green light emanating from a swirling pool. They made settle on a hideout some 100 meters from the stone oasis.

Kaari was the first to sneak up to investigate, but found nothing. 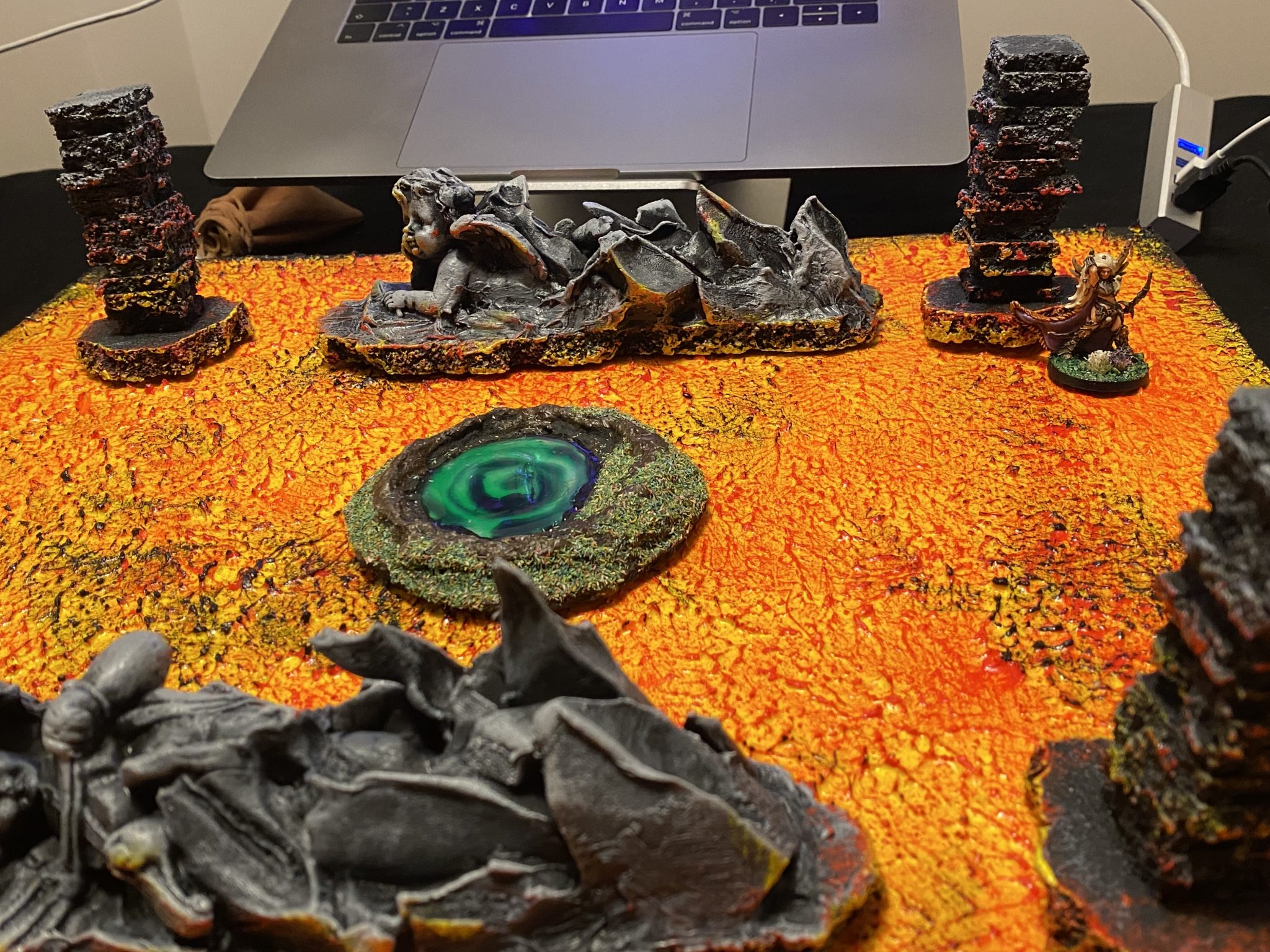 Next, Seipora attempted the same but fell over some skulls creating the noise of an Orc Bard Band in the process echoing across the wasteland. 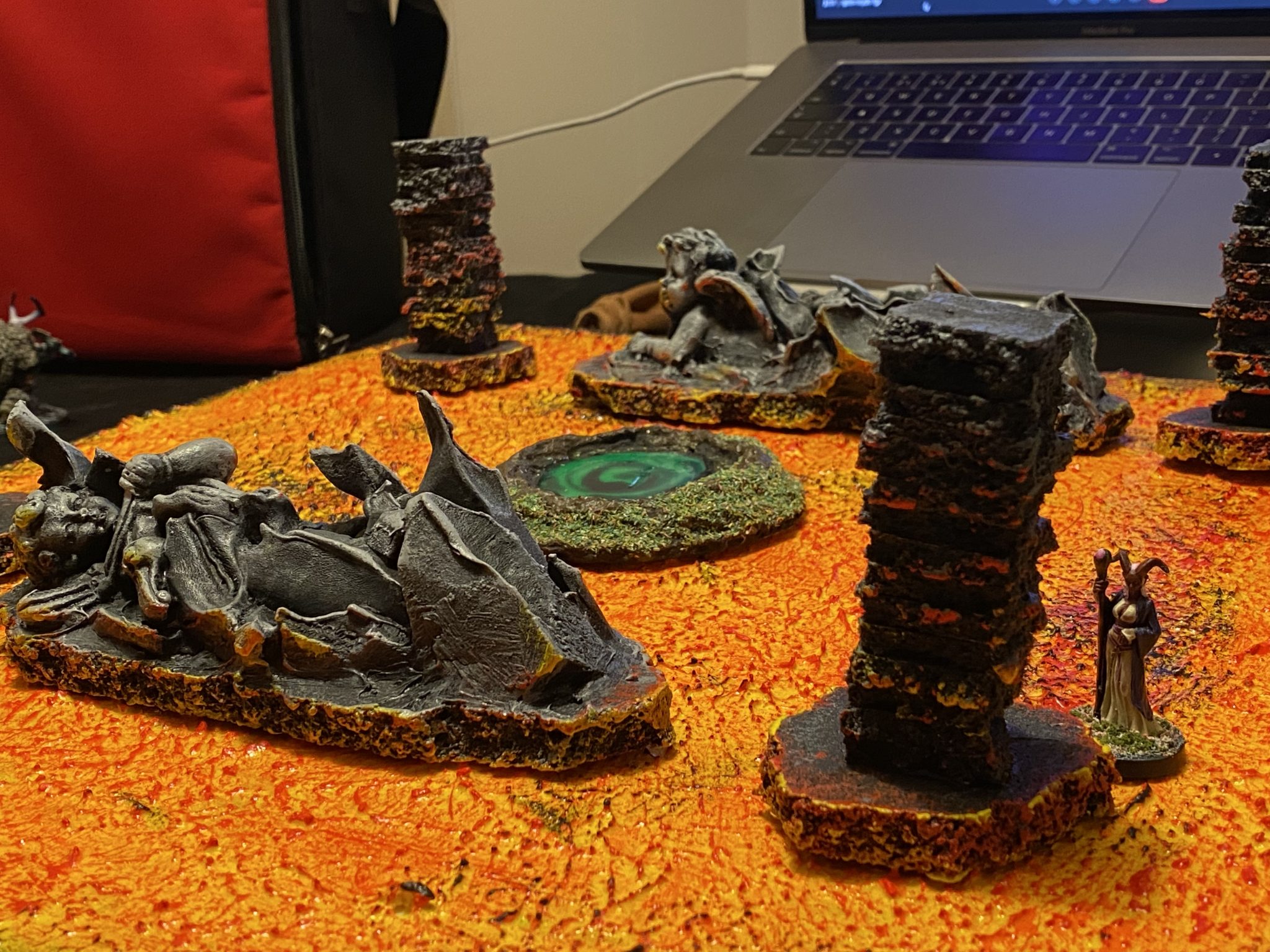 Too late, Kaari and Thorga reacted to the huge shadow swopping passed them and next thing, Seipora was grabbed by the mighty claw of a Red Dragon who flew up and dropped her from a deadly height. 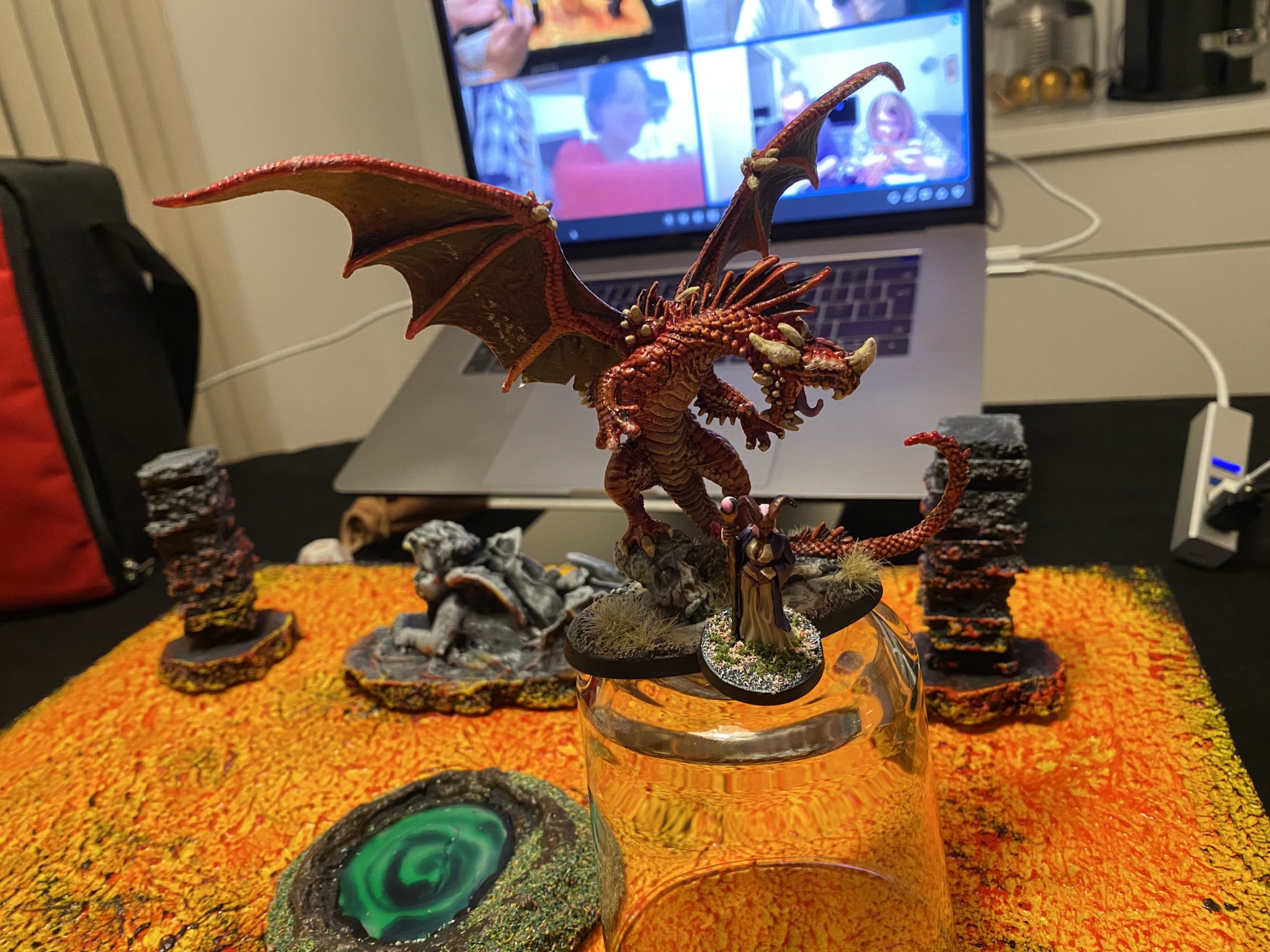 Kaari and Thorga rushed to help, but the dragon had circled around and hit them with her fiery breathe. 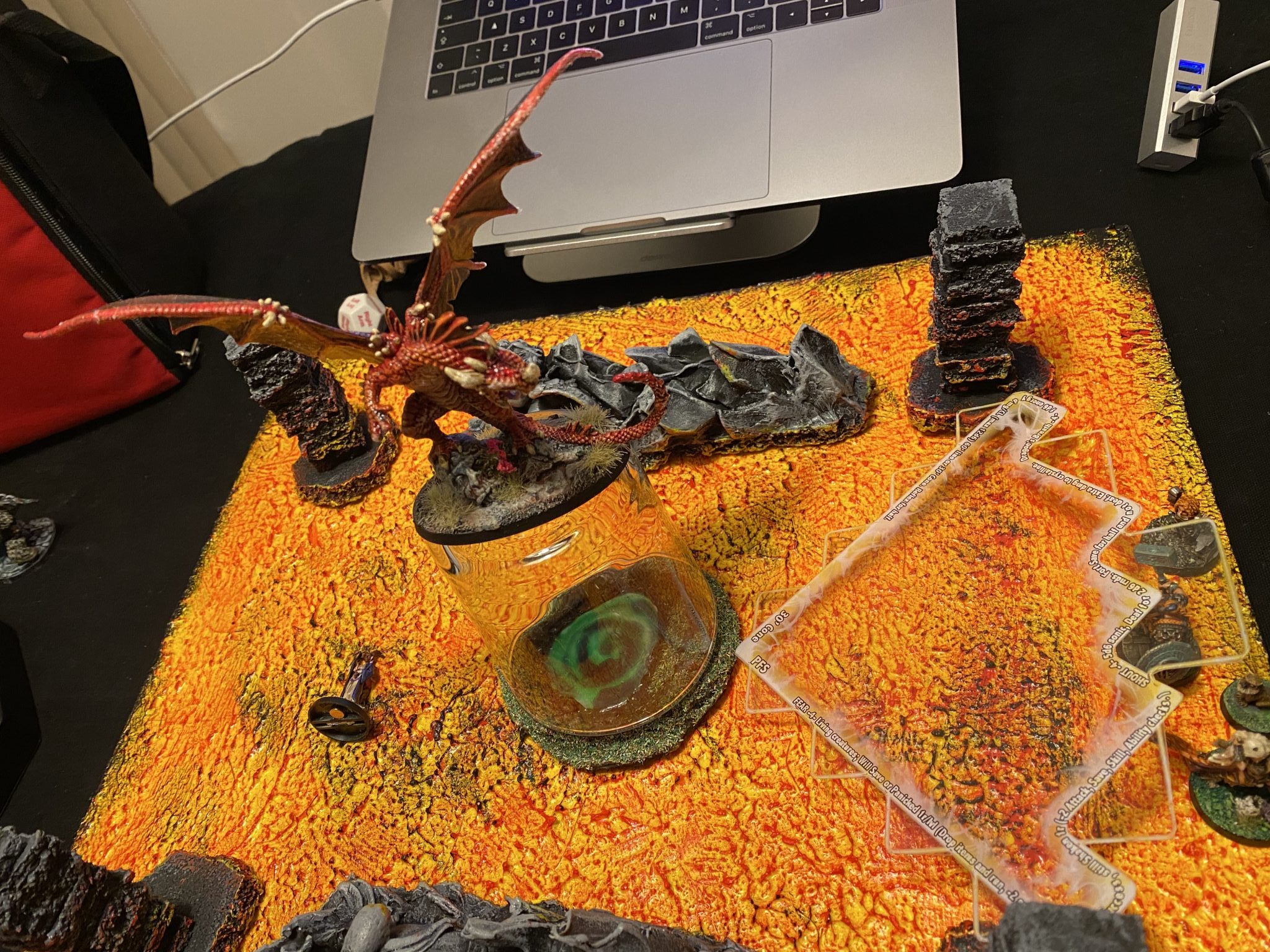 And so the Dragon kept strafing from above reigning fire on the heroes.

That was until her offspring, a young Dragon Wyrmling, decided to join his mother. Brave, the little Dragon attacked Kaari with his own fiery breath. 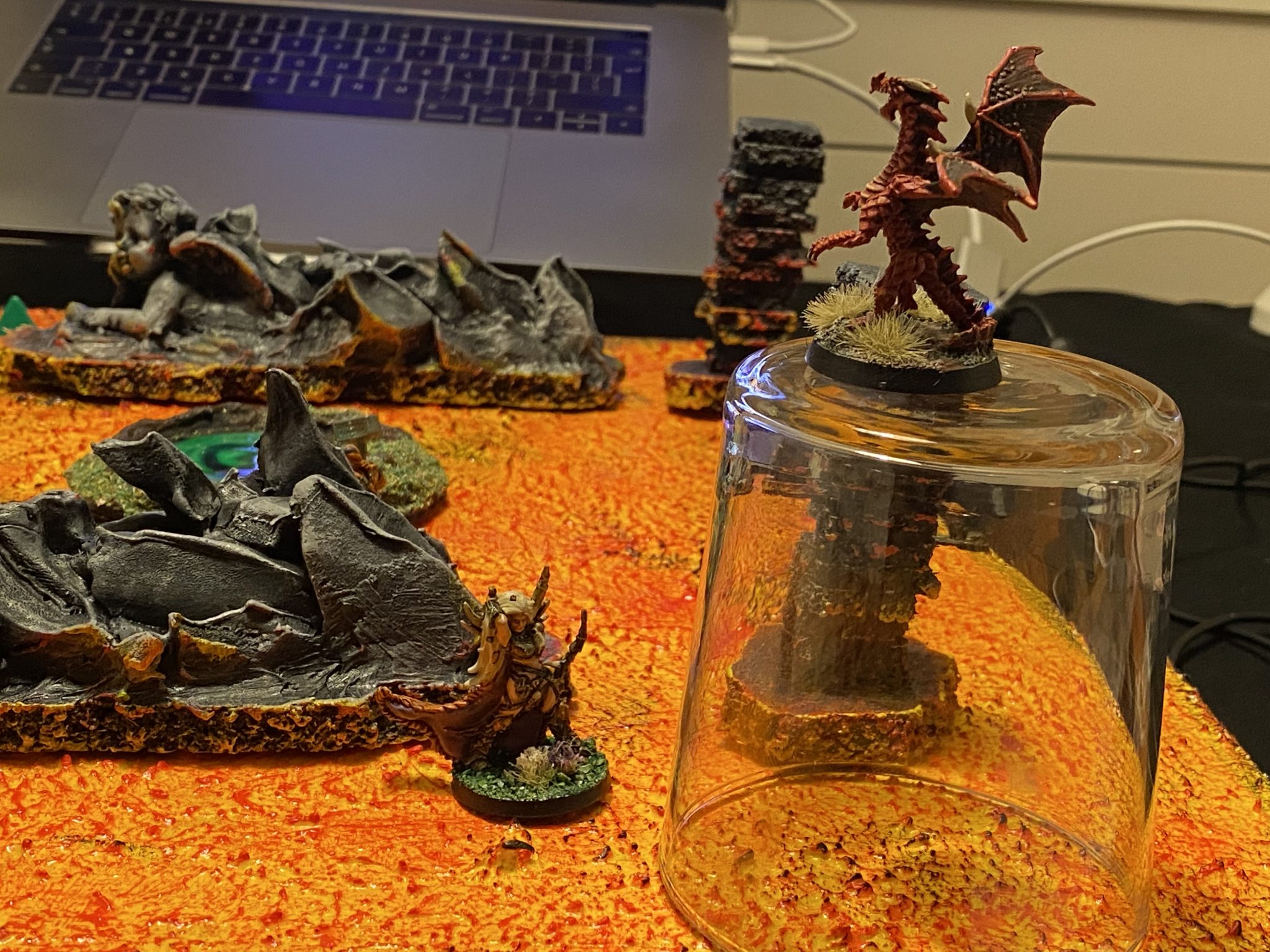 And at the same time a Kobold poked out from a hole in the ground attacking Seipora who had regained her consciousness. 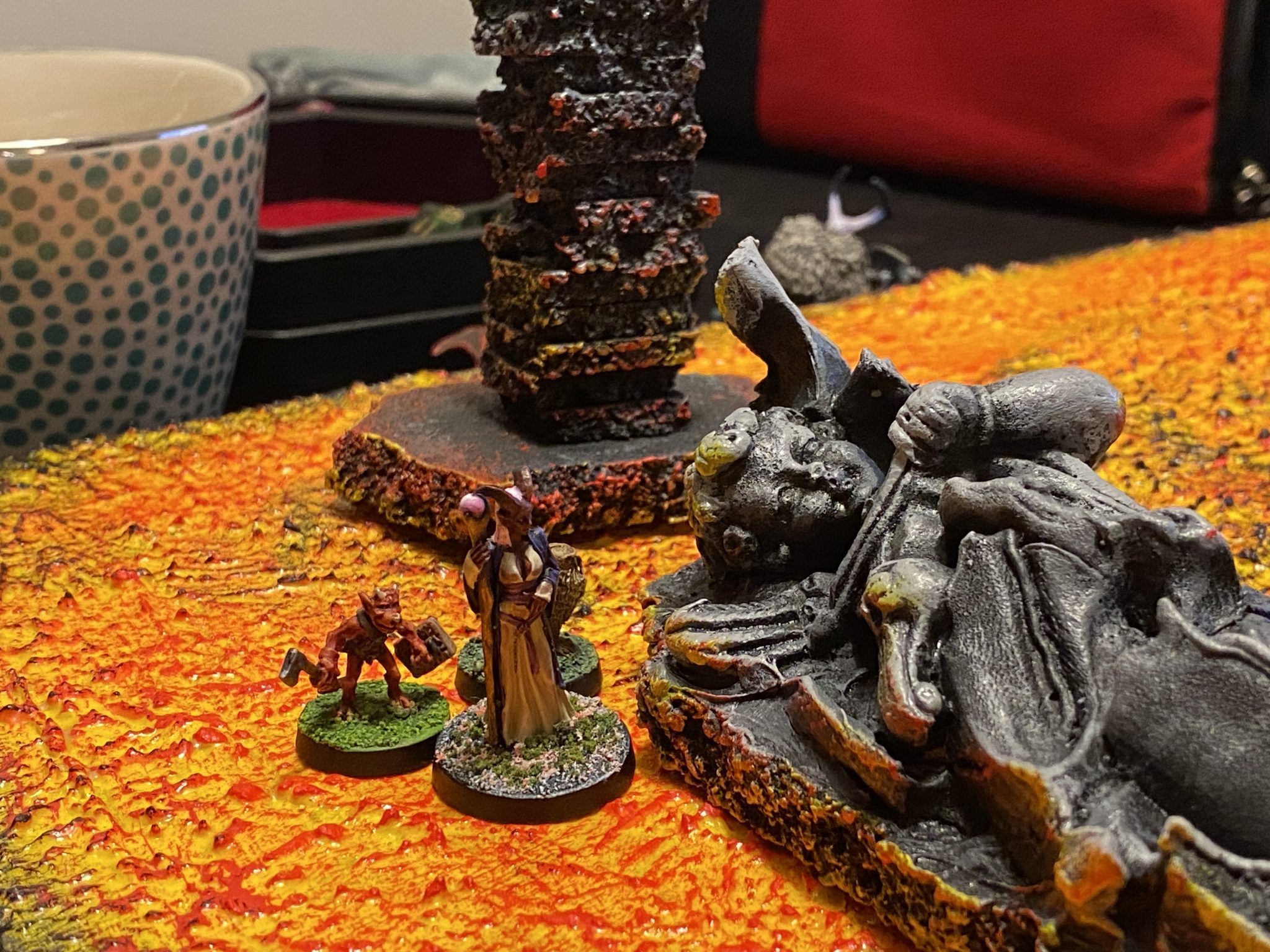 As the Dragon Wyrmling became over confident, it landed to continue the fight, much to his mother’s dismay. Having no choice, she was forced to land to protect her offspring, which meant the party could take the fight to her.

“Throw the feather in the pool”, Shouted Kaari at Seipora, but Seipora, angry having been dropped from above, wanted revenge and prepared to fight the Dragon, but was knocked unconscious again.

At the same time a myriad of Kobolds came flooding out of the ground and with a lucky strike, a lowly Kobold downed Thorga much to everybody’s surprise and horror. 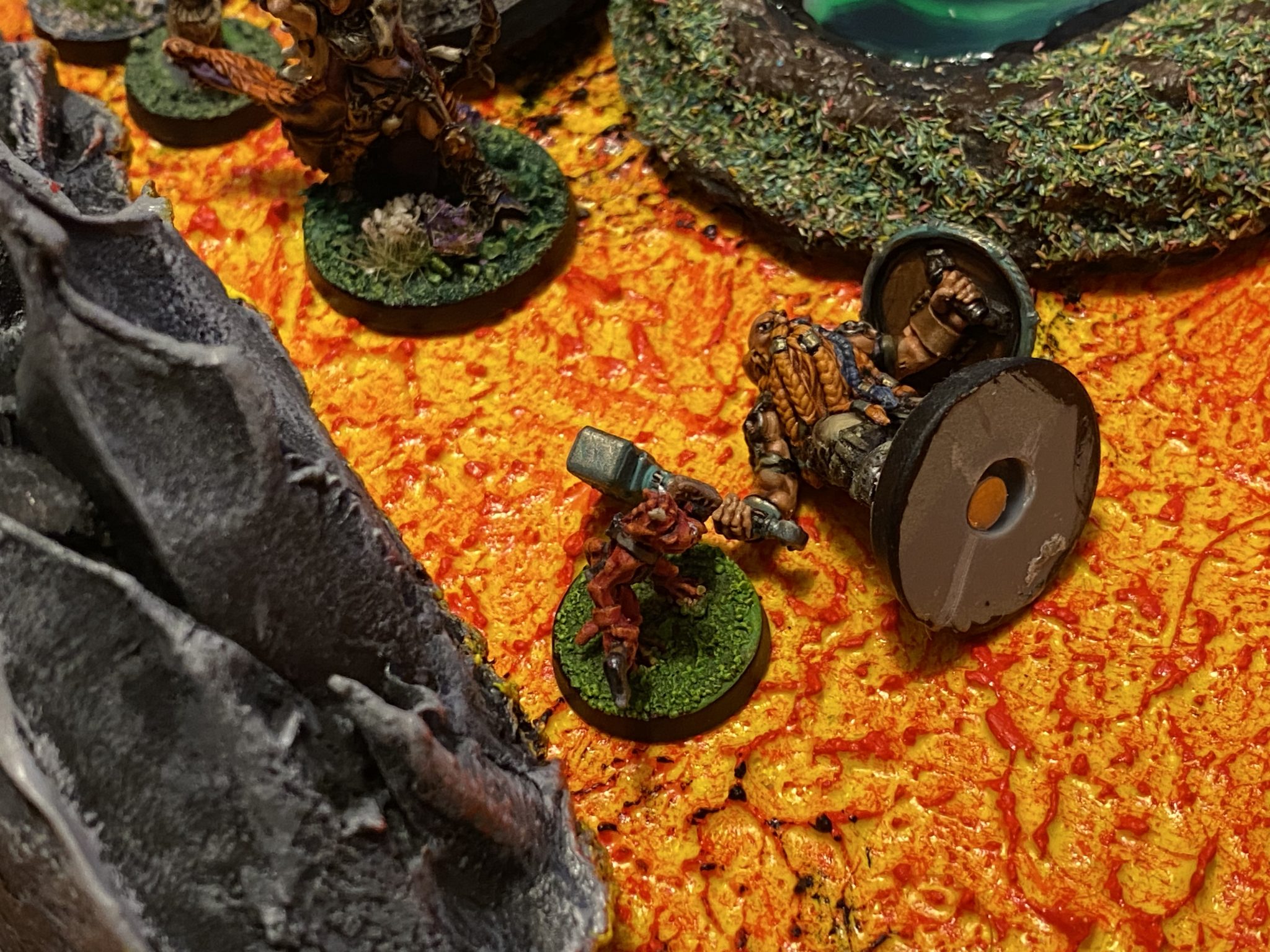 Eventhough Little Ms Gentlefeet made two successful shots with the 666 shooter, badly wounding the Dragon Wyrmling and wounding his mother too, the situation was getting out of hand and not in the favour of our heroes. 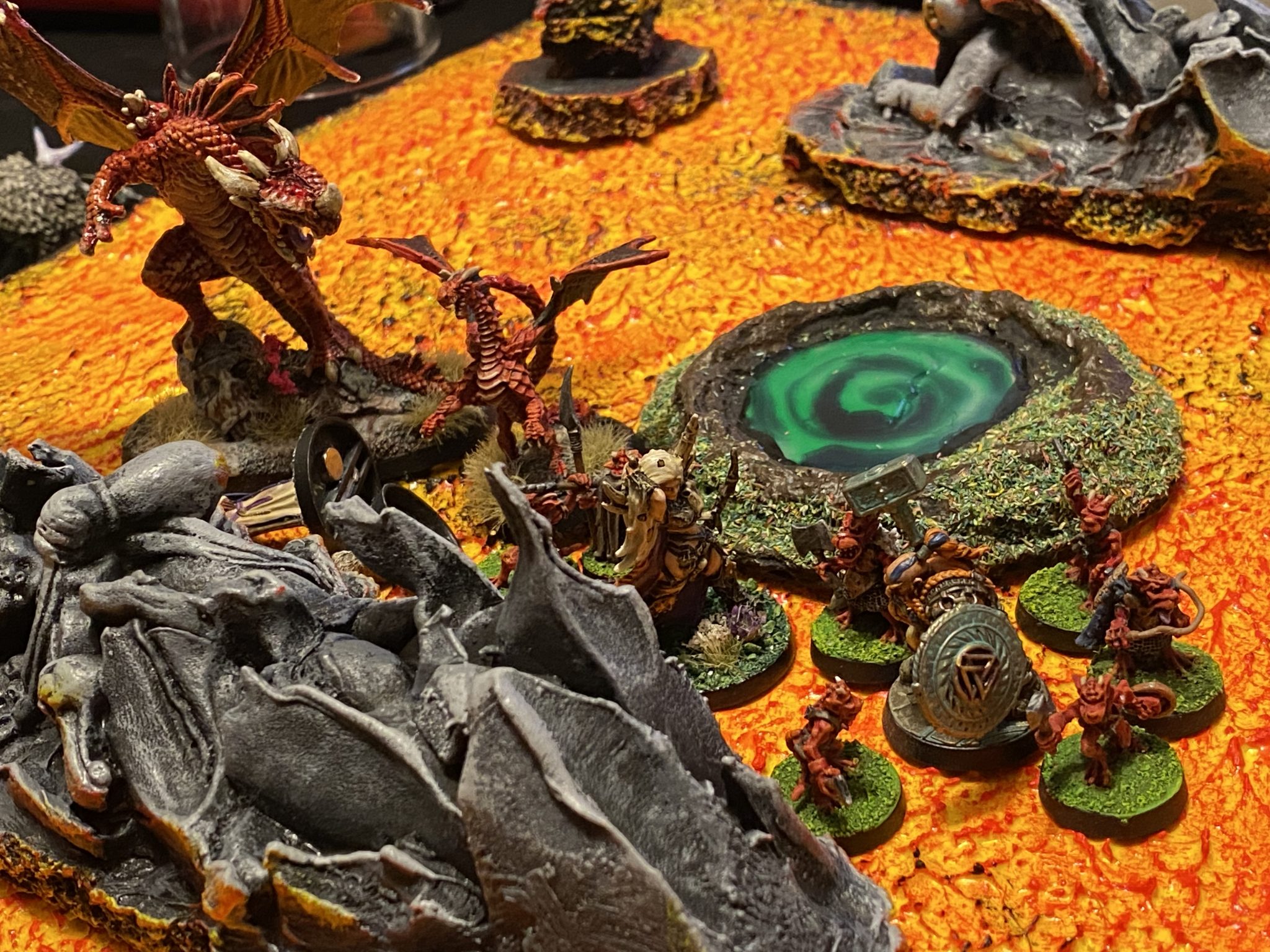 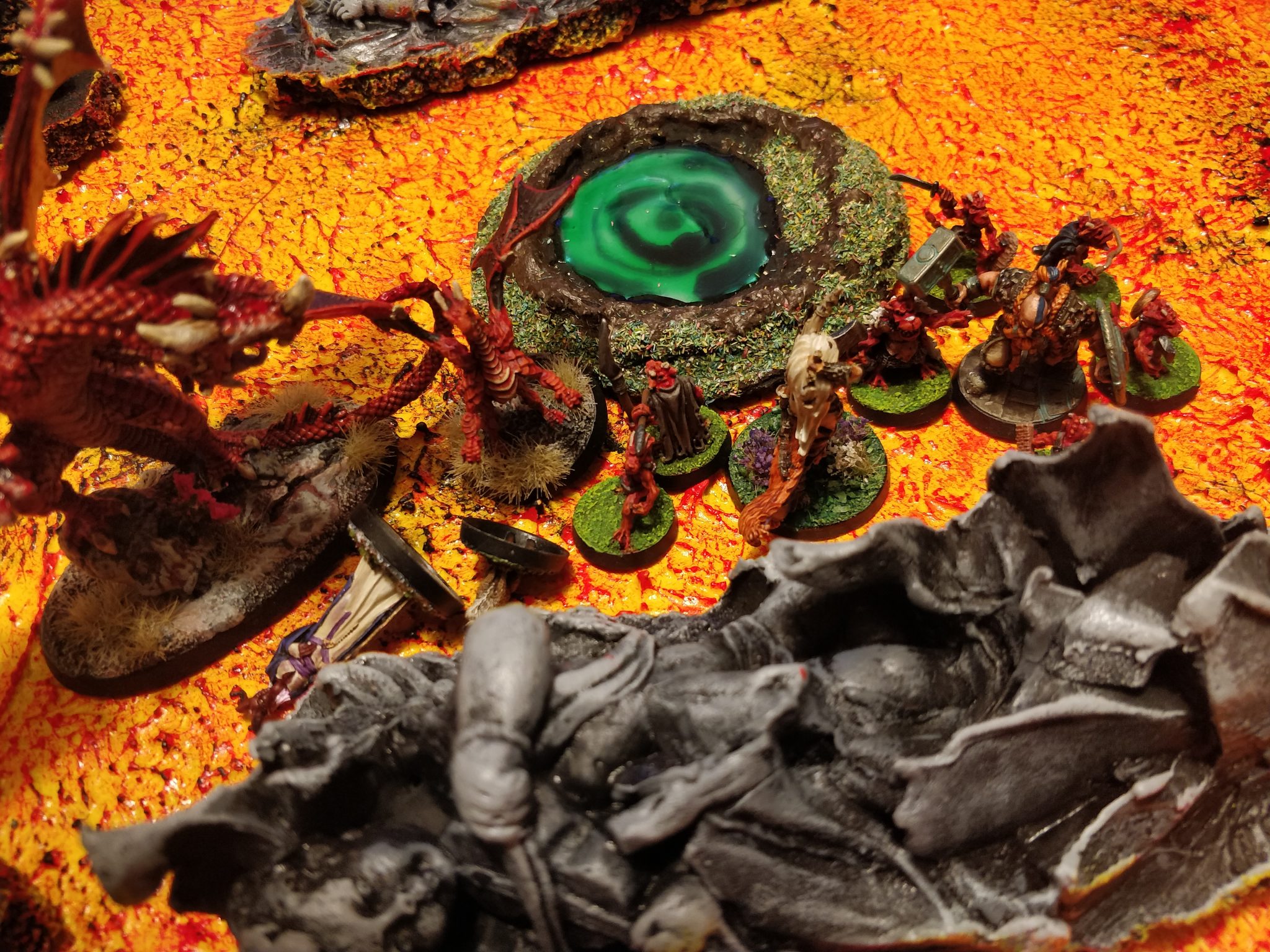 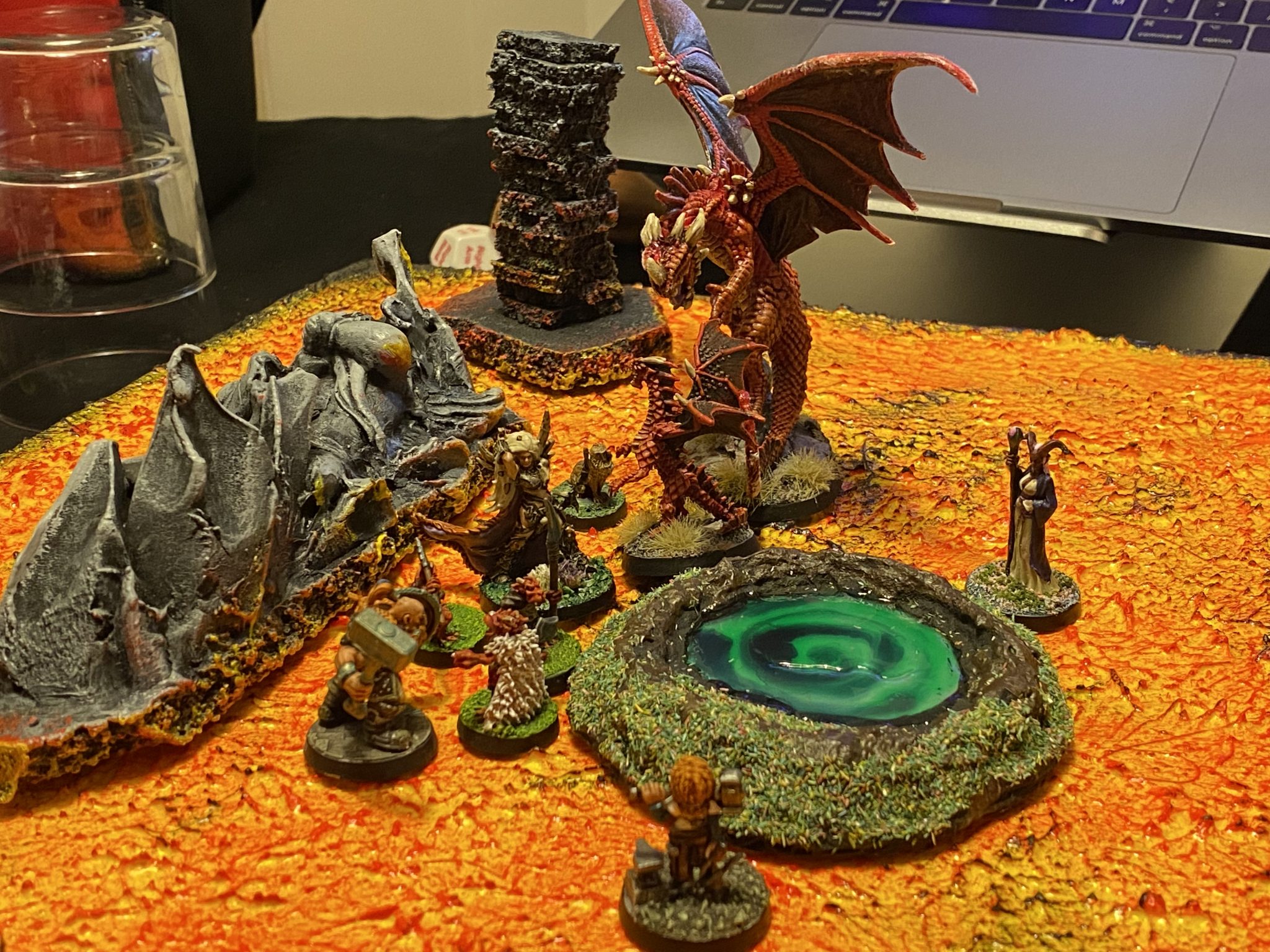 Kaari managed to make her way to Thorga to bring him back and in turn Seipora was brought on her feet again too and this time she ran through the legs of the Dragon and jumped head first in the Colour Pool, holding the Feather of Archon in front of her as she shouted “JUUUUUUMP” to her comrades in arms.

Kaari, Thorga, Little Ms Gentlefeet and Polly the Owlbear, all jumped into the pool. 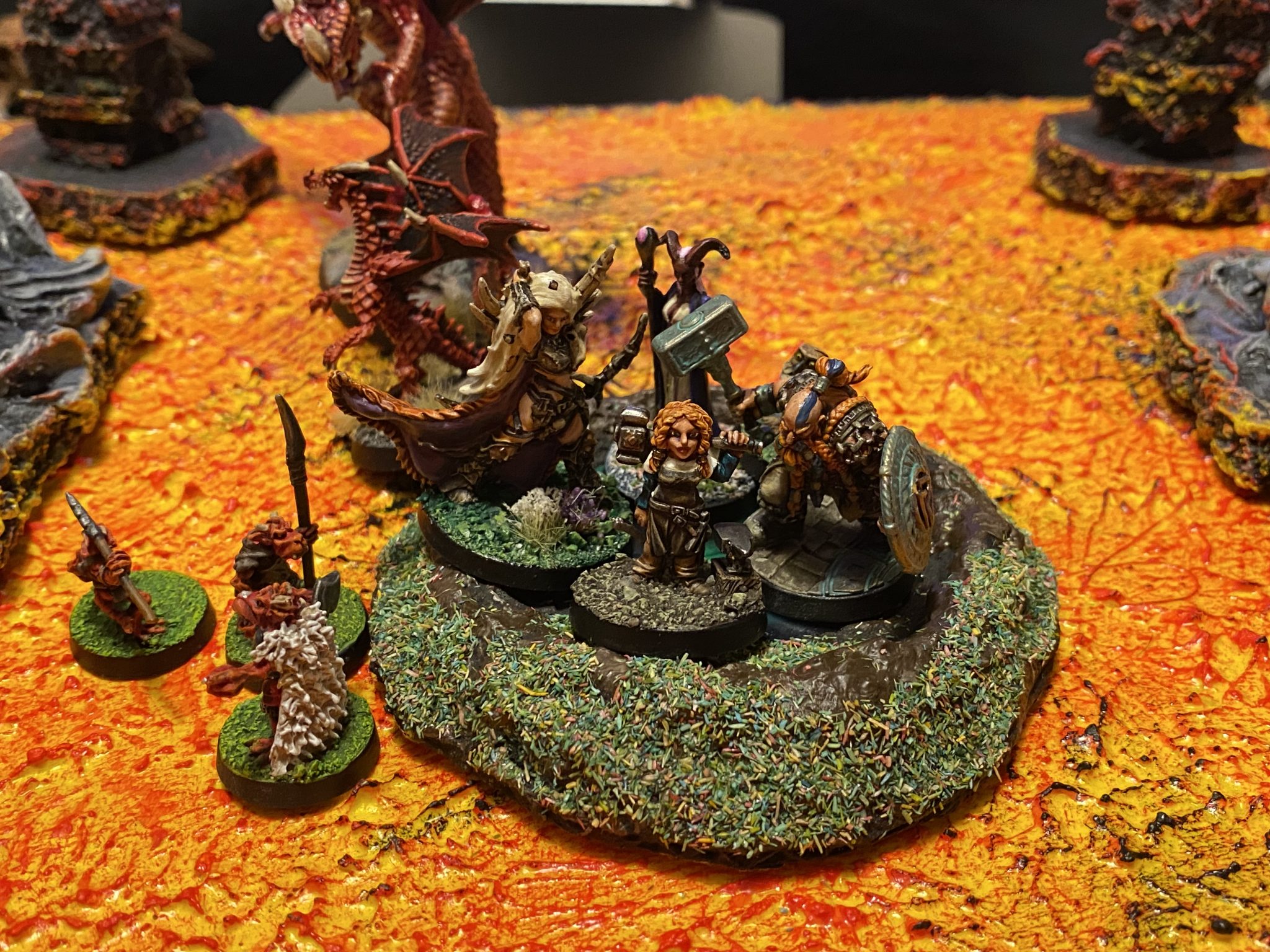 The battleworn and bleeding party landed on a soft white floor. A pleasant breeze of fresh air flowing through their hair and down into their lungs purging the nasty dry dusty air of Phlegethos from their bodies.

In front of them stood male figure with vibrant light emerald skin, dressed in white and with huge white feathered wings on his back.

“Welcome! Can I help you?”, said Archon. 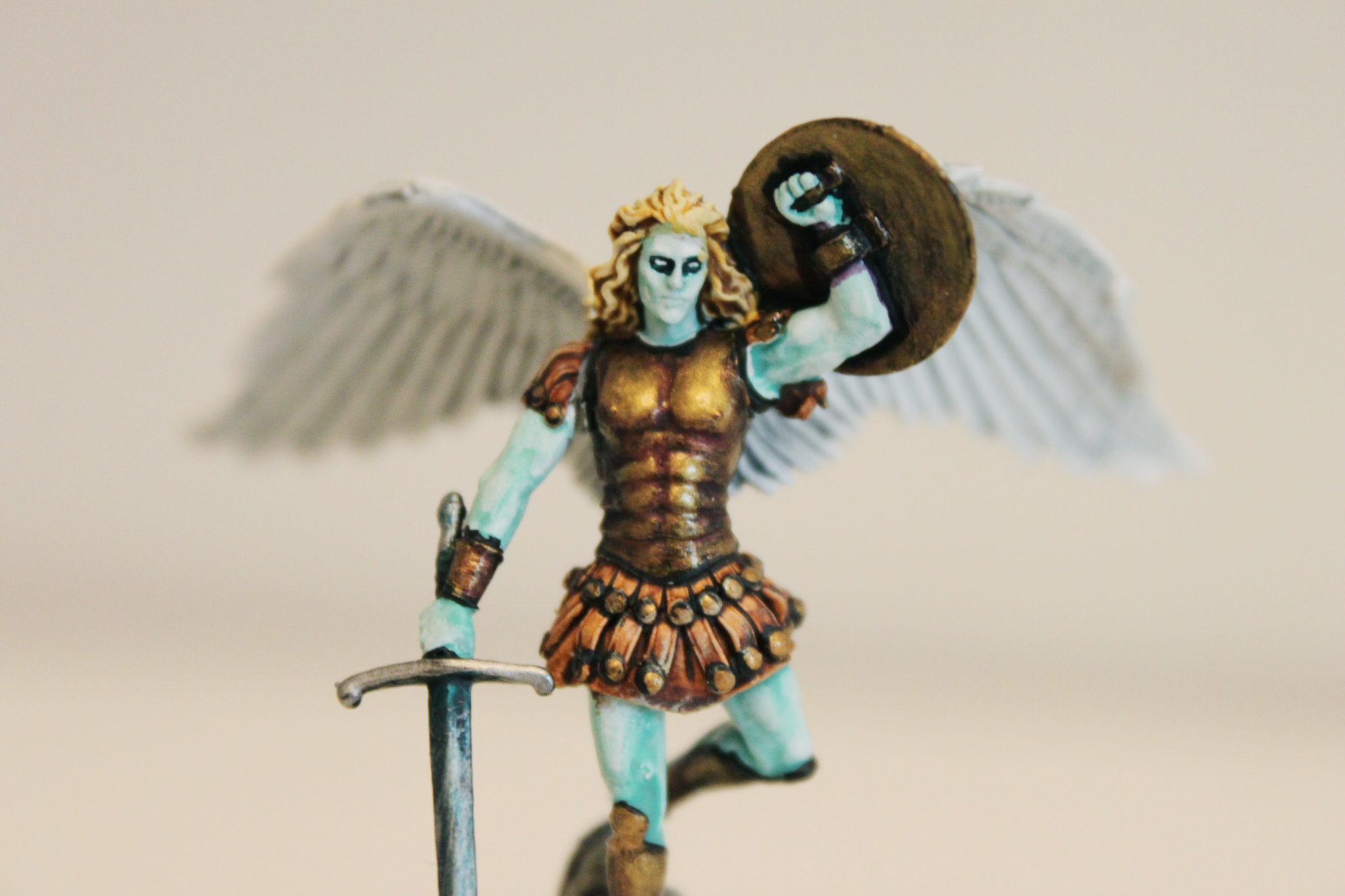