This lvl 2 oneshot was inspired by this lvl 13 oneshot called “Krampus’ Lair”.

You meet in a tavern

It is dark, cold and winter time. The party meets in the Singing Salmon to reminisce over the year’s adventuring, when they cozy talks are interrupted by a drunk and crying woman by the bar.

She turns out to be the resident toy maker, but is being pushed out of  business by this odd white bearded fellow who has appeared twice handing out free toys during the town’s Winterfest, which is normally her most busy time.

She even tells the party that last year when this chap showed up, two children disappeared.

The party agrees to do something about the situation.

Before the heroes trekked to Santa’s workshop, that has appeared a few days earlier out of nowhere, they wanted to talk to the parents of the lost children.

Nothing came out of that more than one parent blaming Santa for the disappearance as it happened days after his workshop appeared last year. 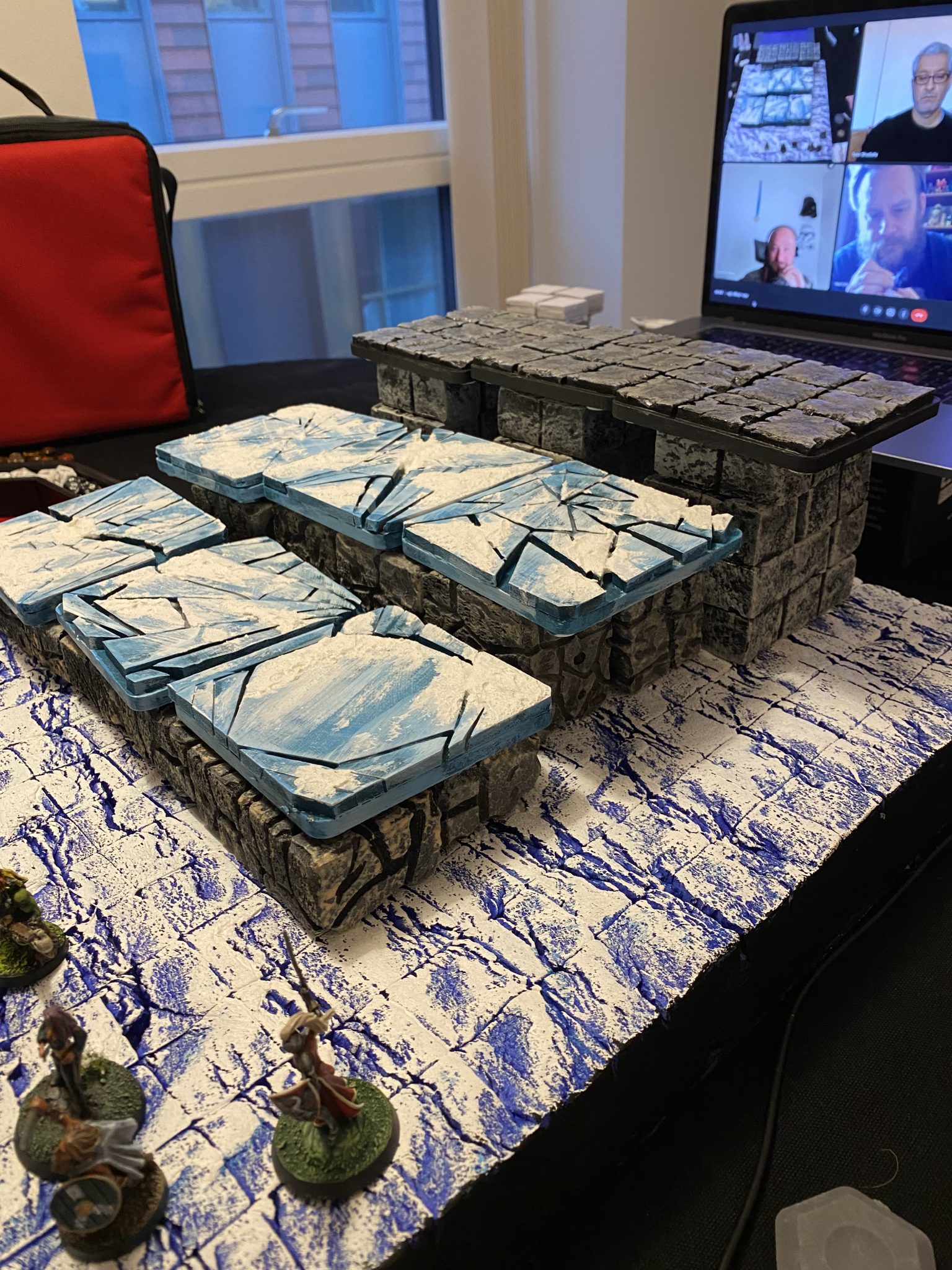 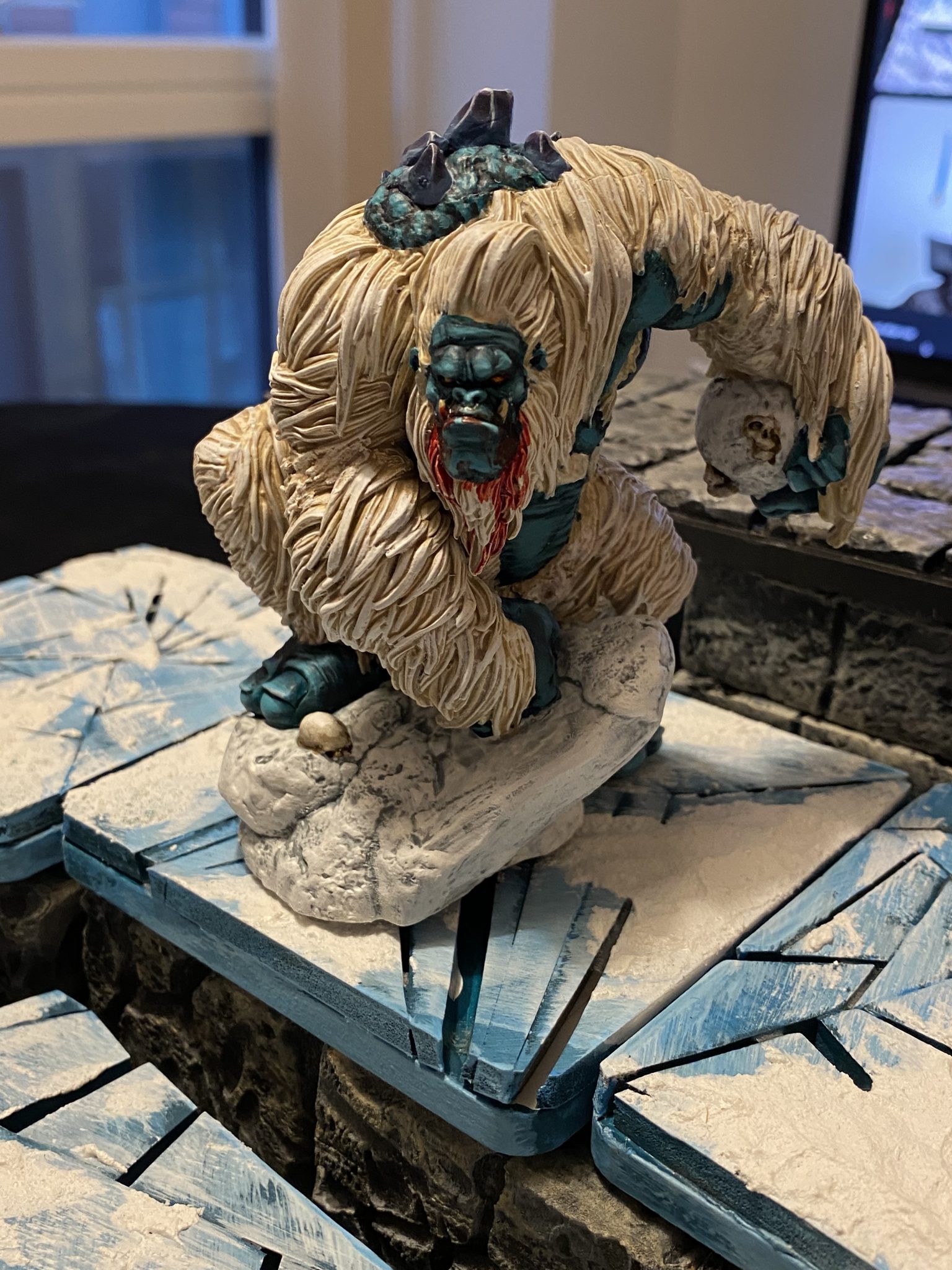 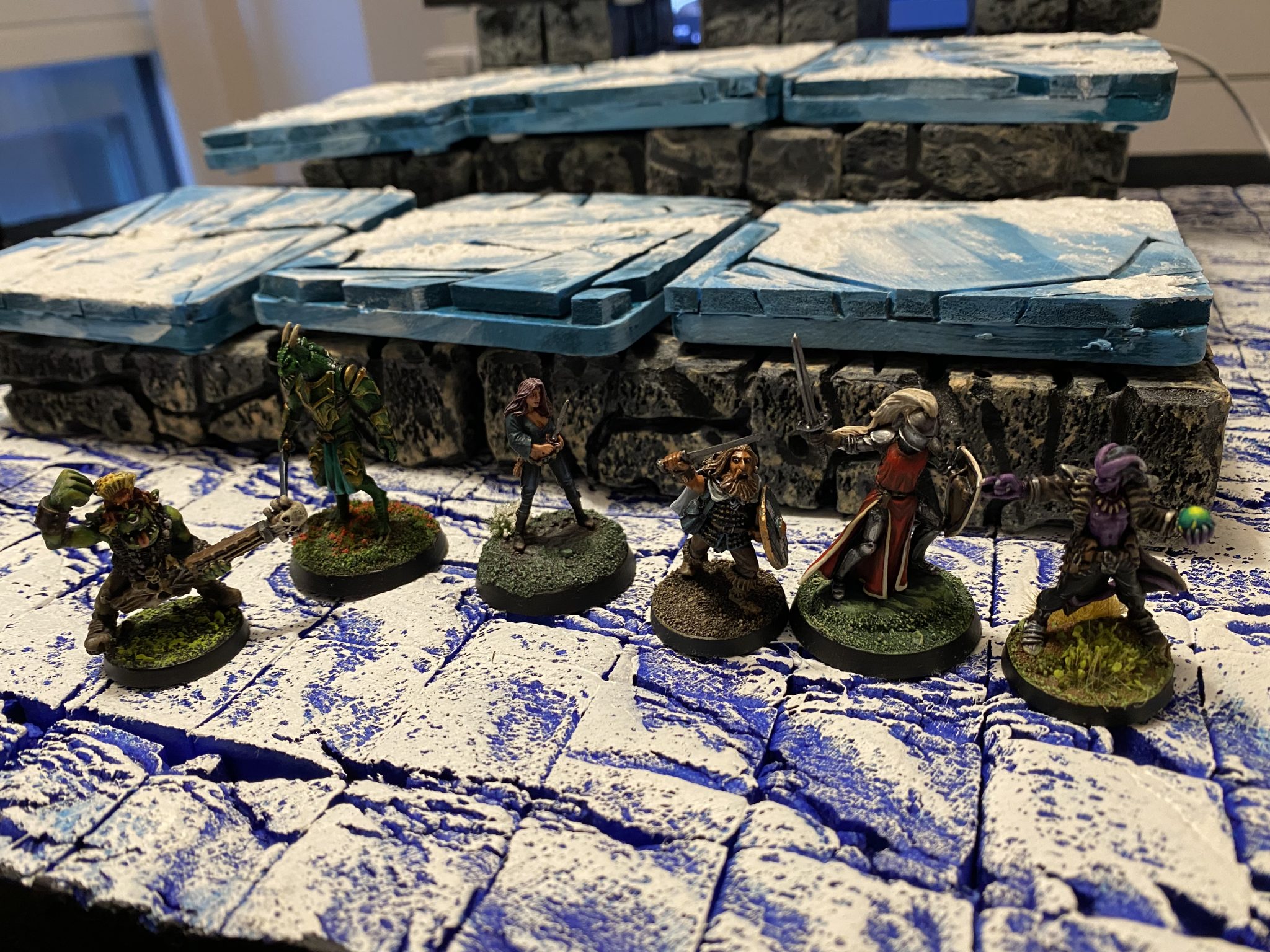 To get to Santa’s workshop, the party has to climb the steep hill, but as soon as they started, a Yeti emerged throwing mighty snowballs at the party pushing them down the hill (DM notes, DC15 Dec or dam + Pushed back one step).

The Yeti also called for aid and red-hatted gnomes showed up throwing smaller snowballs at individuals in the party.

Eventually the party made it to the top, where they convinced the last surviving Gnome that they had arrived to seek job building toys. 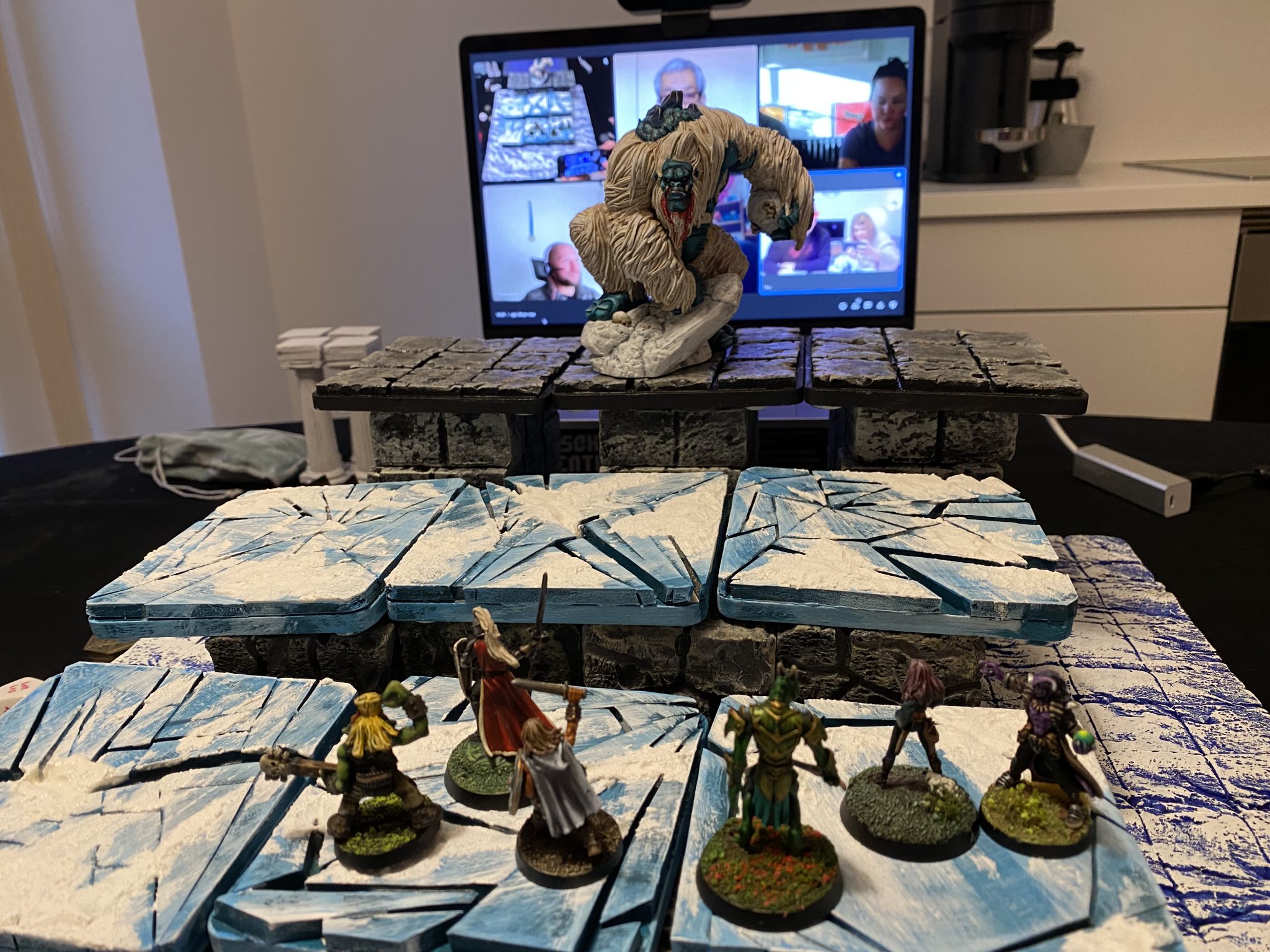 Eager, the Gnome took them into Santa’s workshop, where it became clear that there was no ill will. In fact, the place radiated only joy and goodness.

Santa appeared, confused about the accusations and when he asked Mrs Santa to check the names of the two lost kids, she didn’t appear.

As the Gnomes searched for her, they returned with a letter that was stabbed into the cubboards in the kitchen reading:

Yo Santa! Hand over your workshop if you want Mrs DSanta back!

Wasting no time, the party found tracks in the snow outside and followed them to the mountains where they found a silver door. 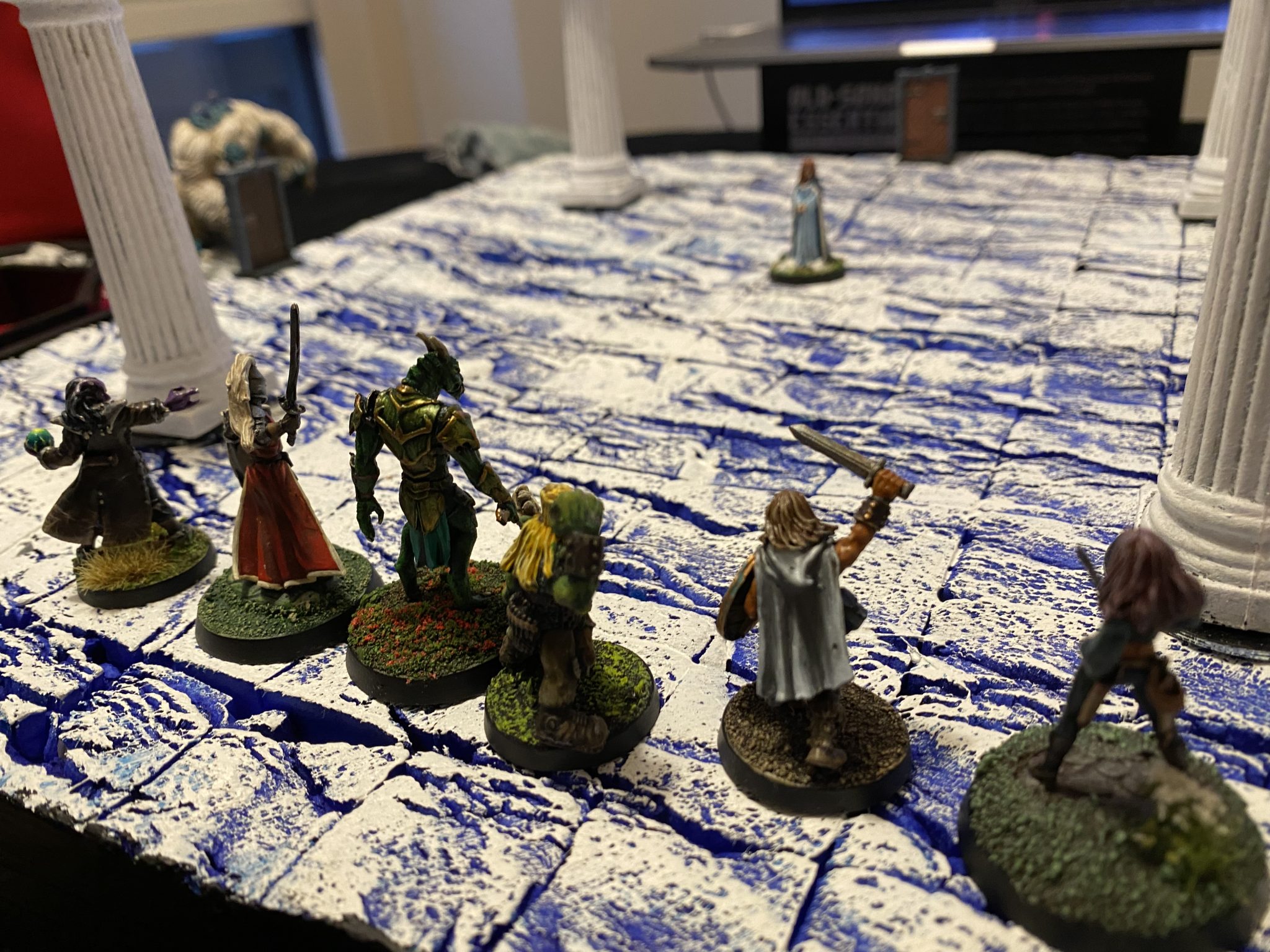 Inside the silver door they met a smiling, but somewhat confused Winter Eladrin who didn’t seem to know who she was or much else.

DM note: I had so much fun playing the Winter Eladrin. 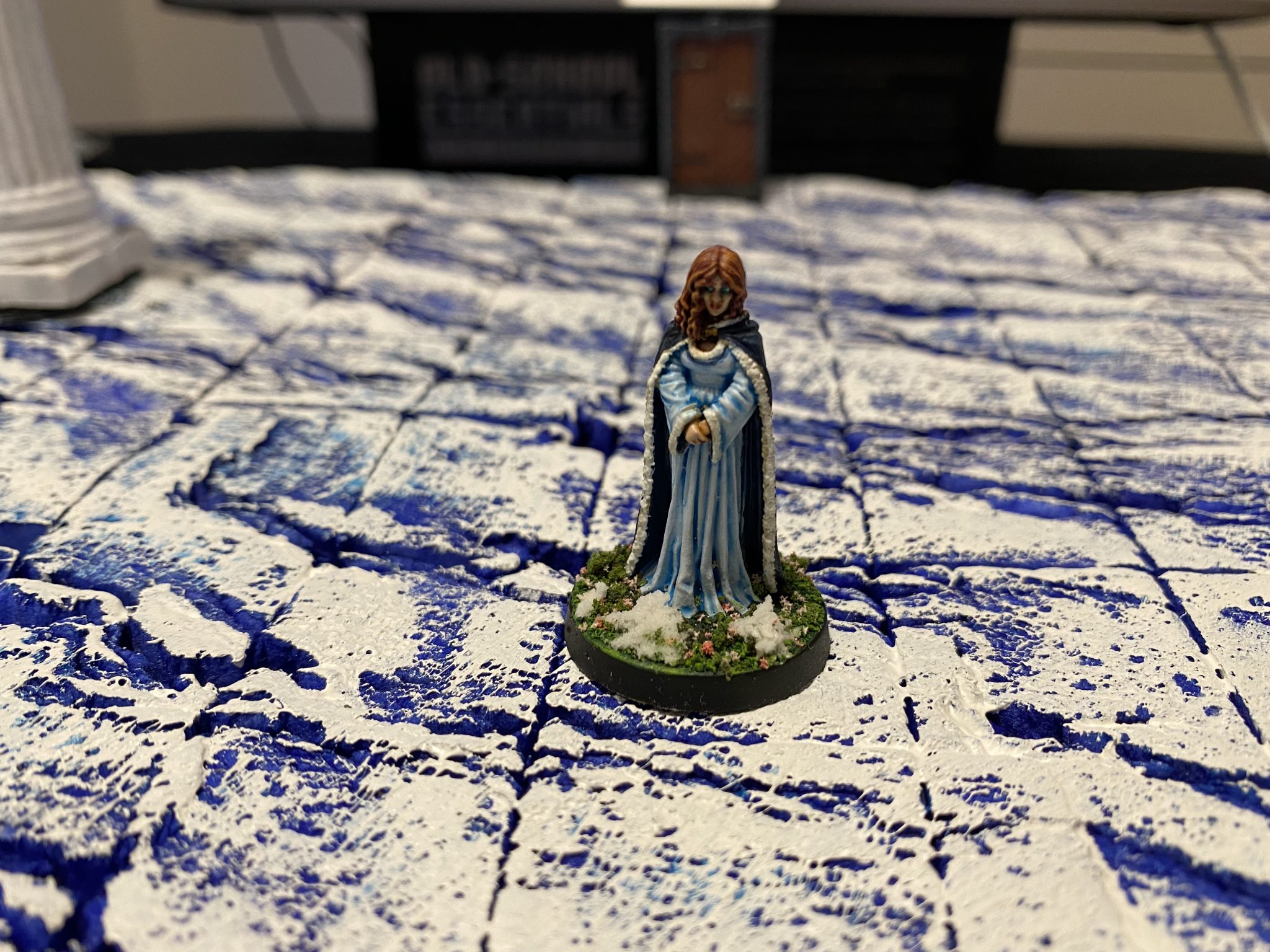 Faced with 4 doors (South where they came from and three others leading West, East and North) the party went on to investigate but all doors led to utter blackness.

The Eladrin proposed to help with a riddle:

Riddle: What decoration made of berries and pine, is shaped like a donut and makes doors look divine?

The heroes actually guessed West, but during some conversation of who should go first, they ended up choosing North.

Going through the blackness, the party arrived in a room full of fossilised remnants of a Titan and with a growling coming from the North of the room. 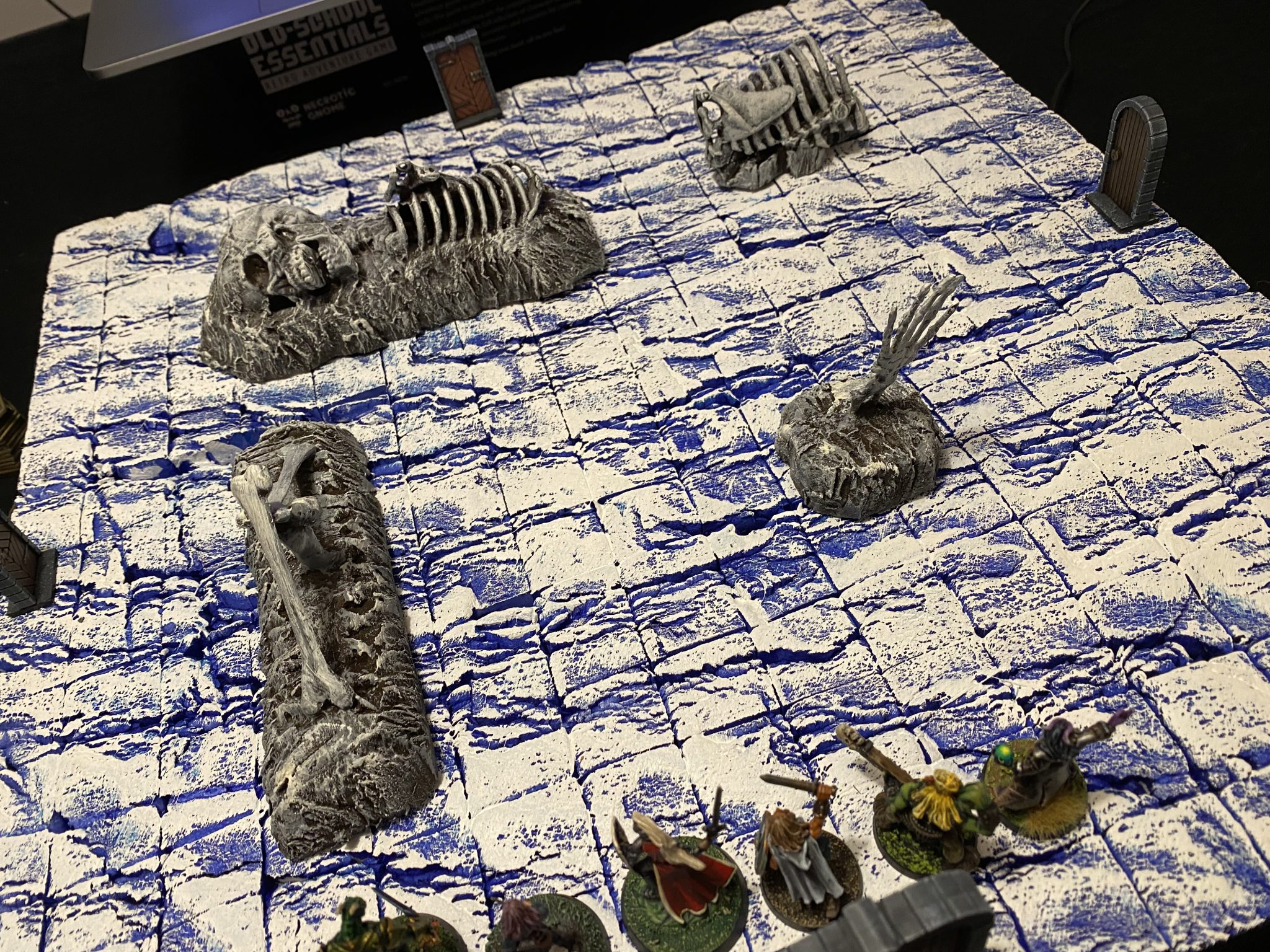 Cautiously approaching, the party found a Snowy Owlbear, who the Paladin engaged. A short fight later and the Paladin was knocked unconscious. 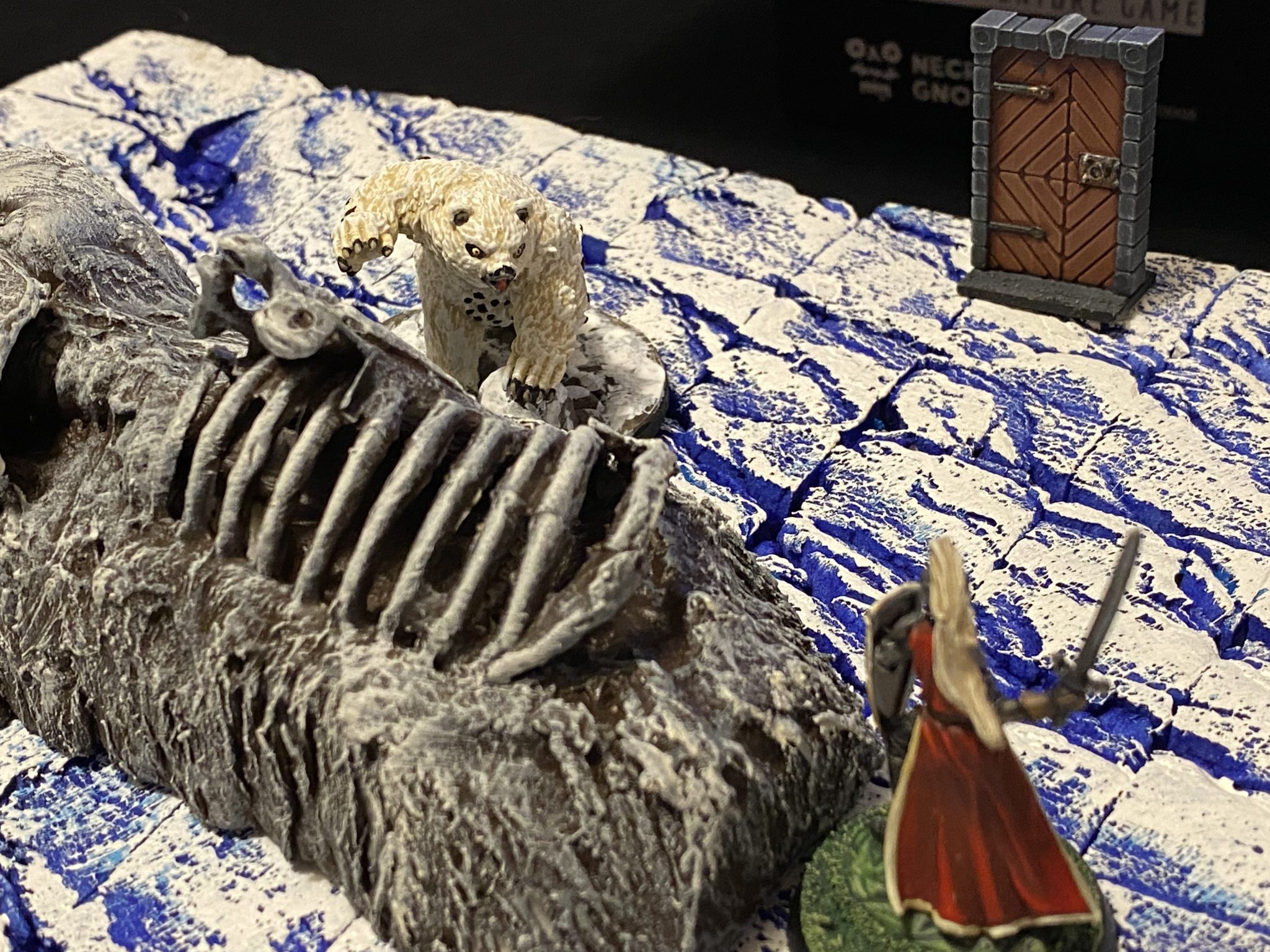 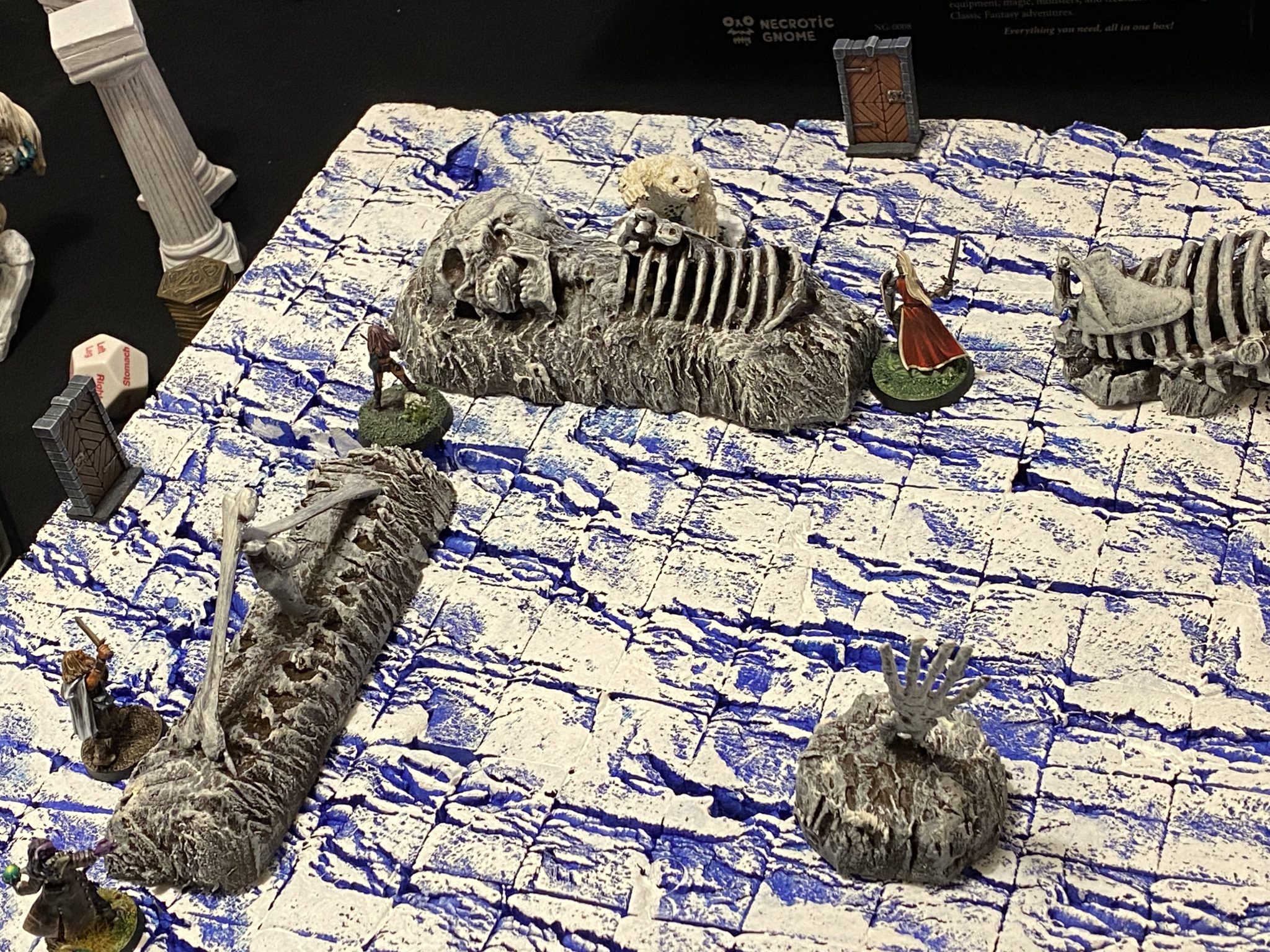 Although the Paladin was brought back, he was knocked down again by the vicious (but cuddly) beast. 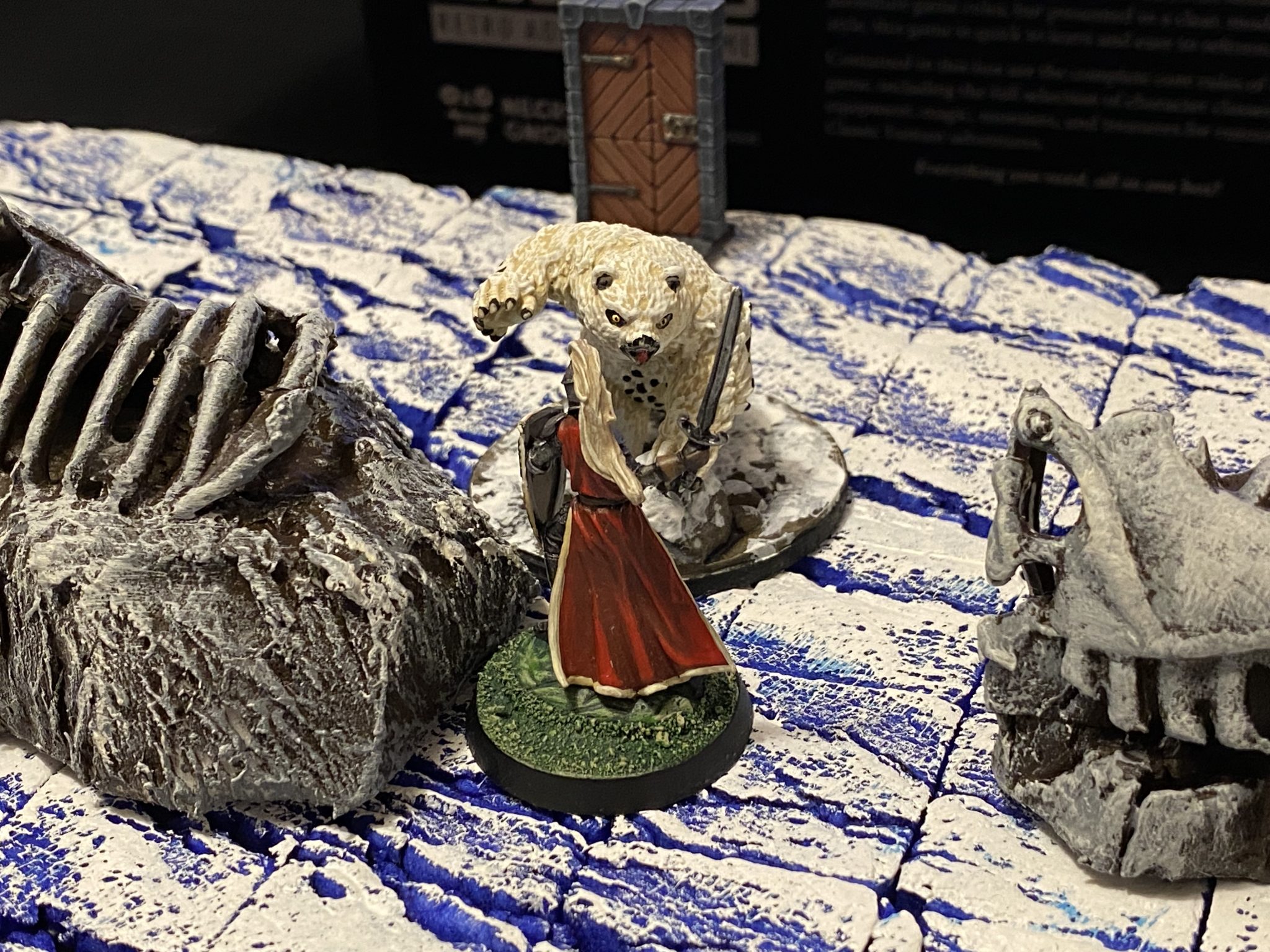 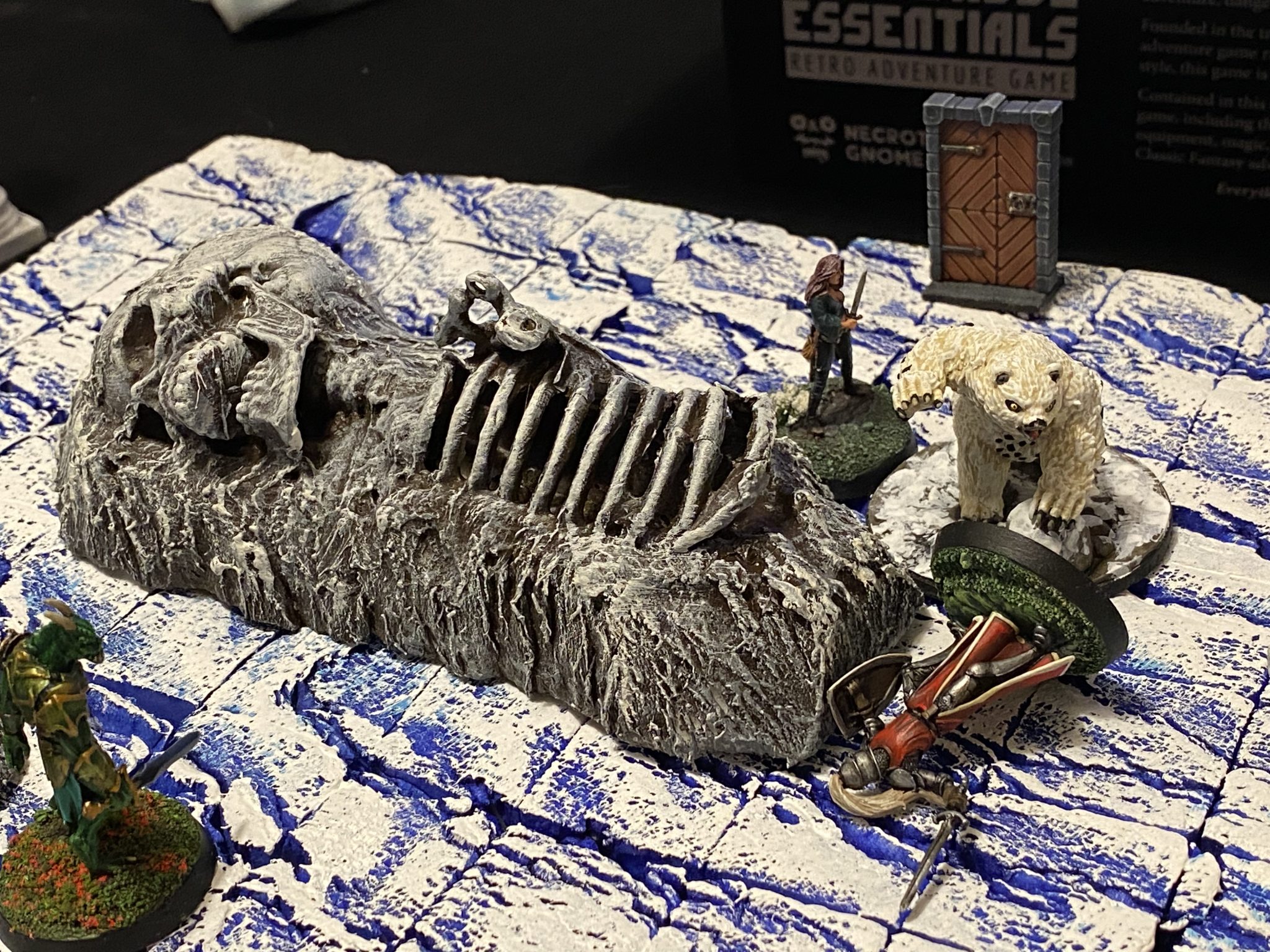 In the end the party emerged victorious and the Eladrin appeared out of thin air to provide a new riddle for which door to choose.

Riddle: Where does Frosty the Snowman keep his money?

This time the party chose South, as much as anything to get back to the original room. A short break later, the party was ready!

Stepping through the right door, the party face not an icy room as expected, but a room where the floor was lava!

In the far corner they spotted Mrs Santa held up by a Hellhound! 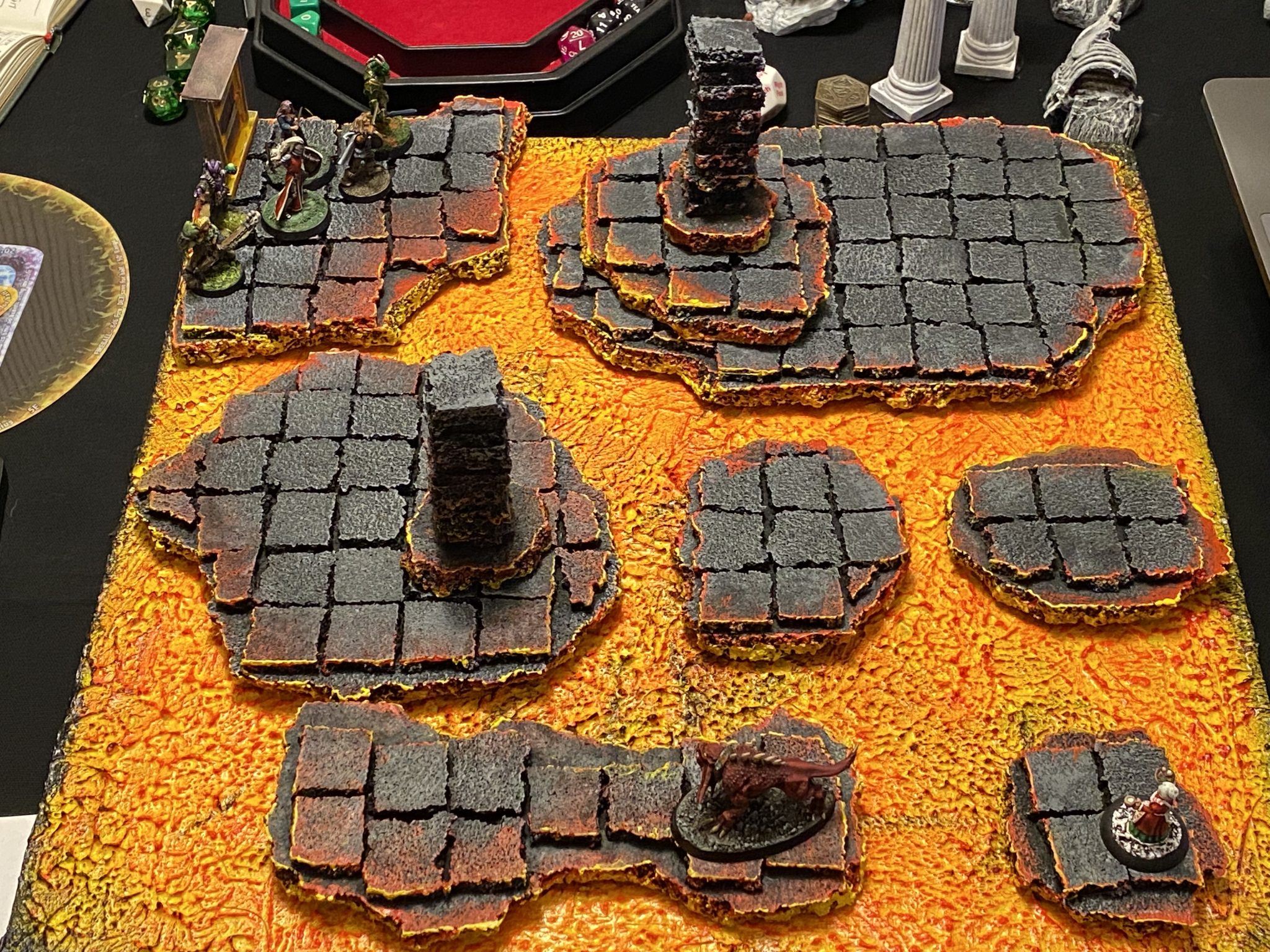 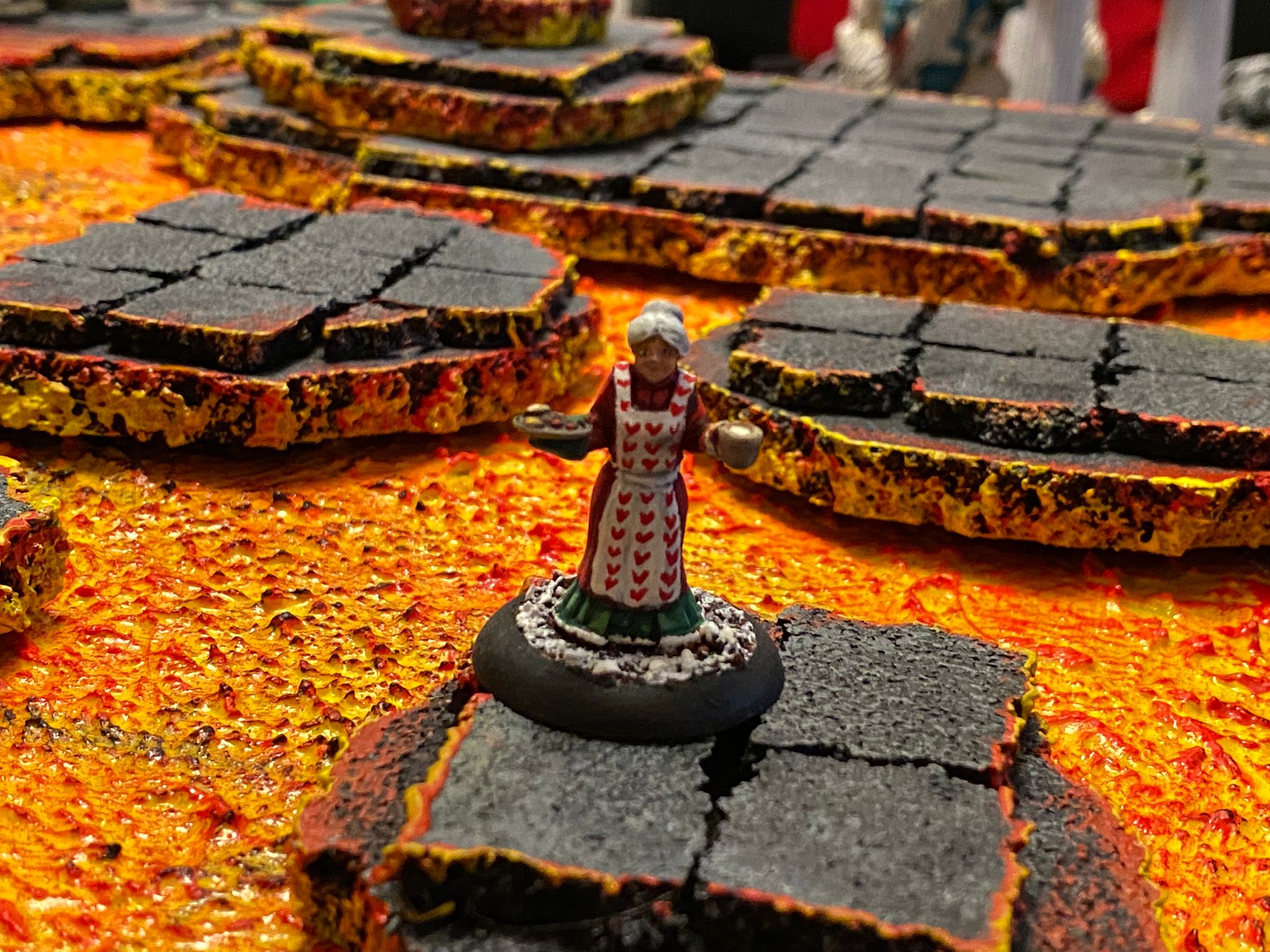 As the party started to make their way to save Mrs Santa, they was slowed down by inability to cross the lava streams.

In fact, our Paladin fell in and was unconscious again, only to be saved last minute by our Fighter. 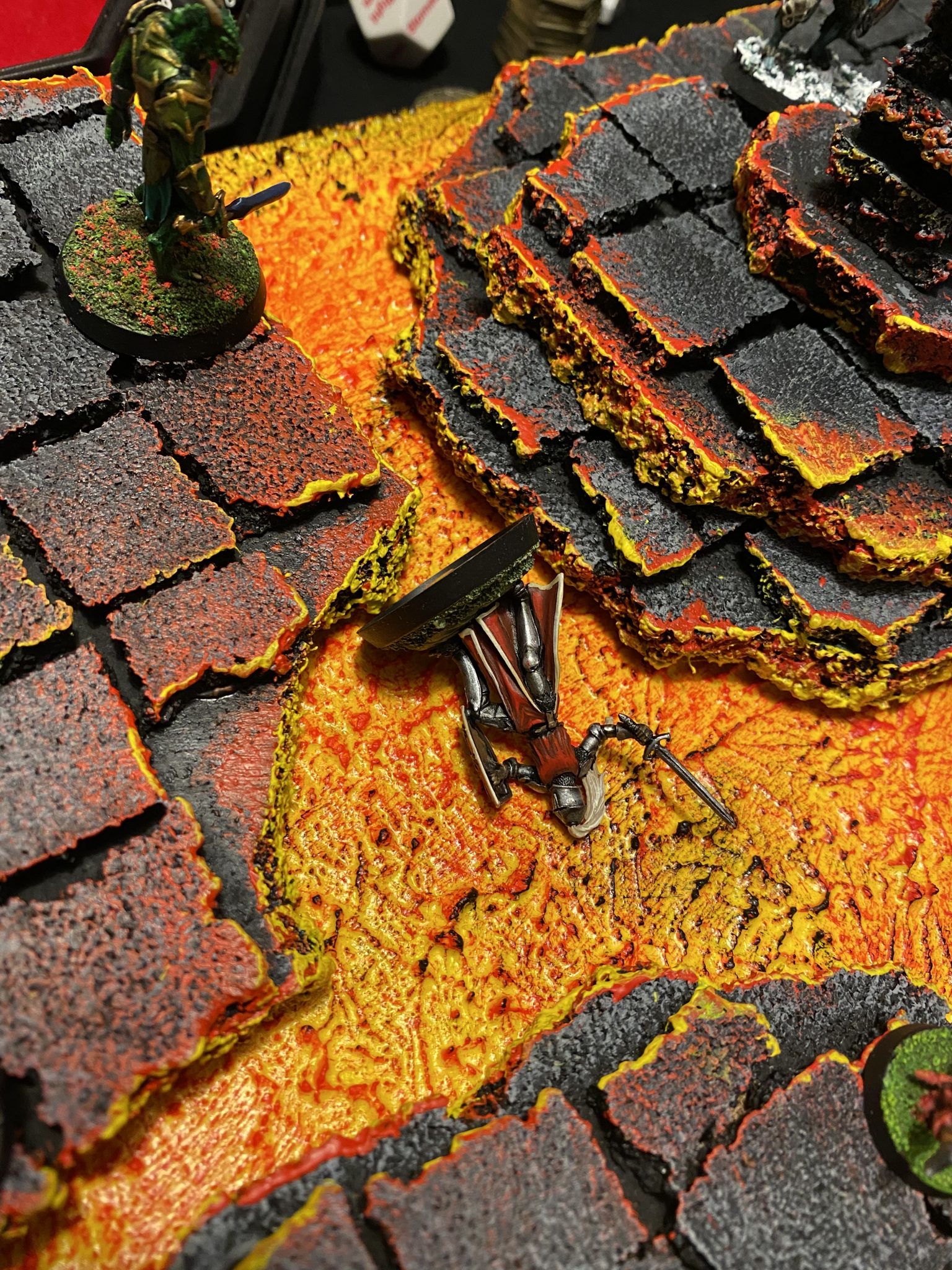 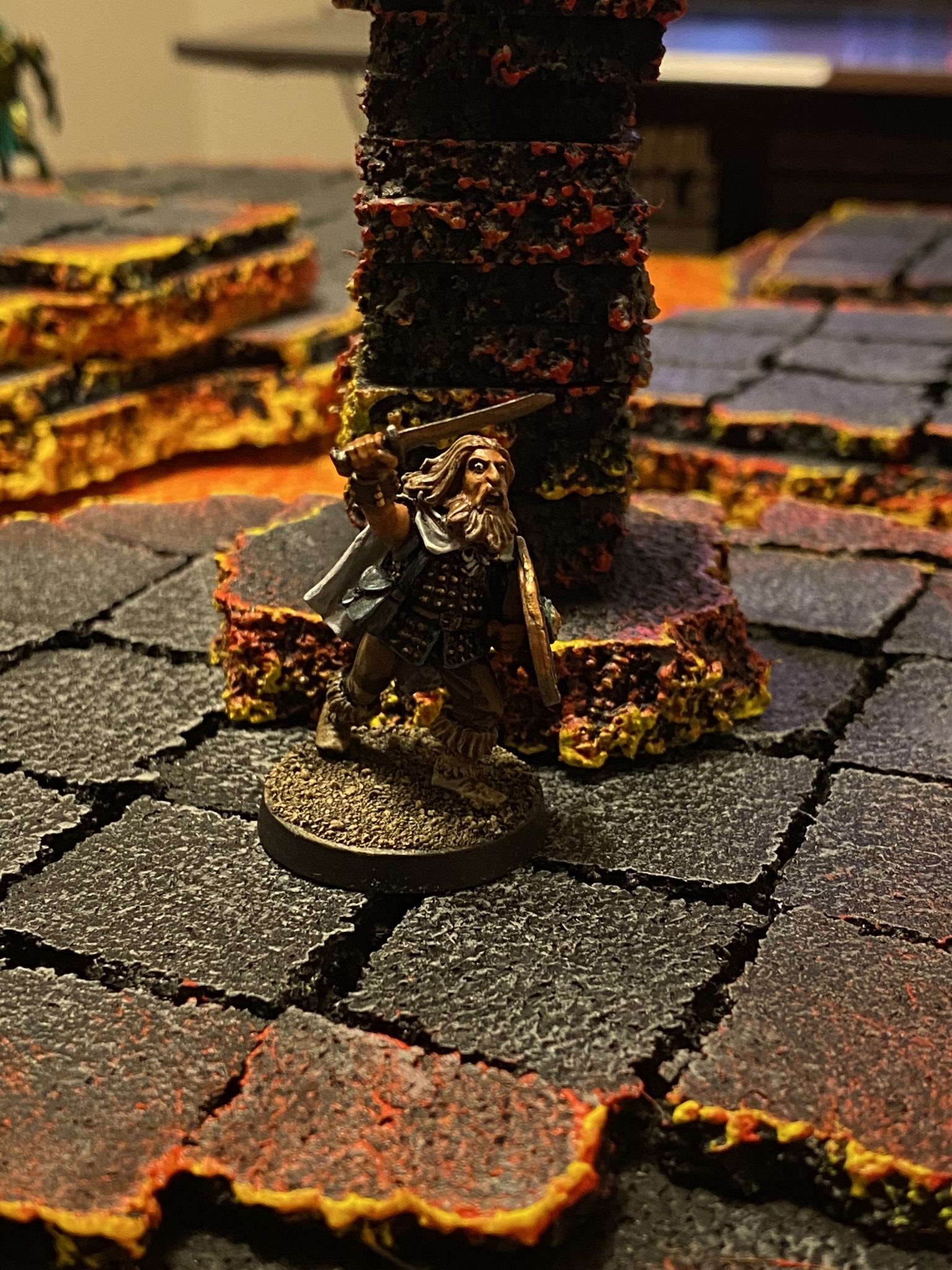 Finally the heroes engaged the Hellhound and the heroes were winning. 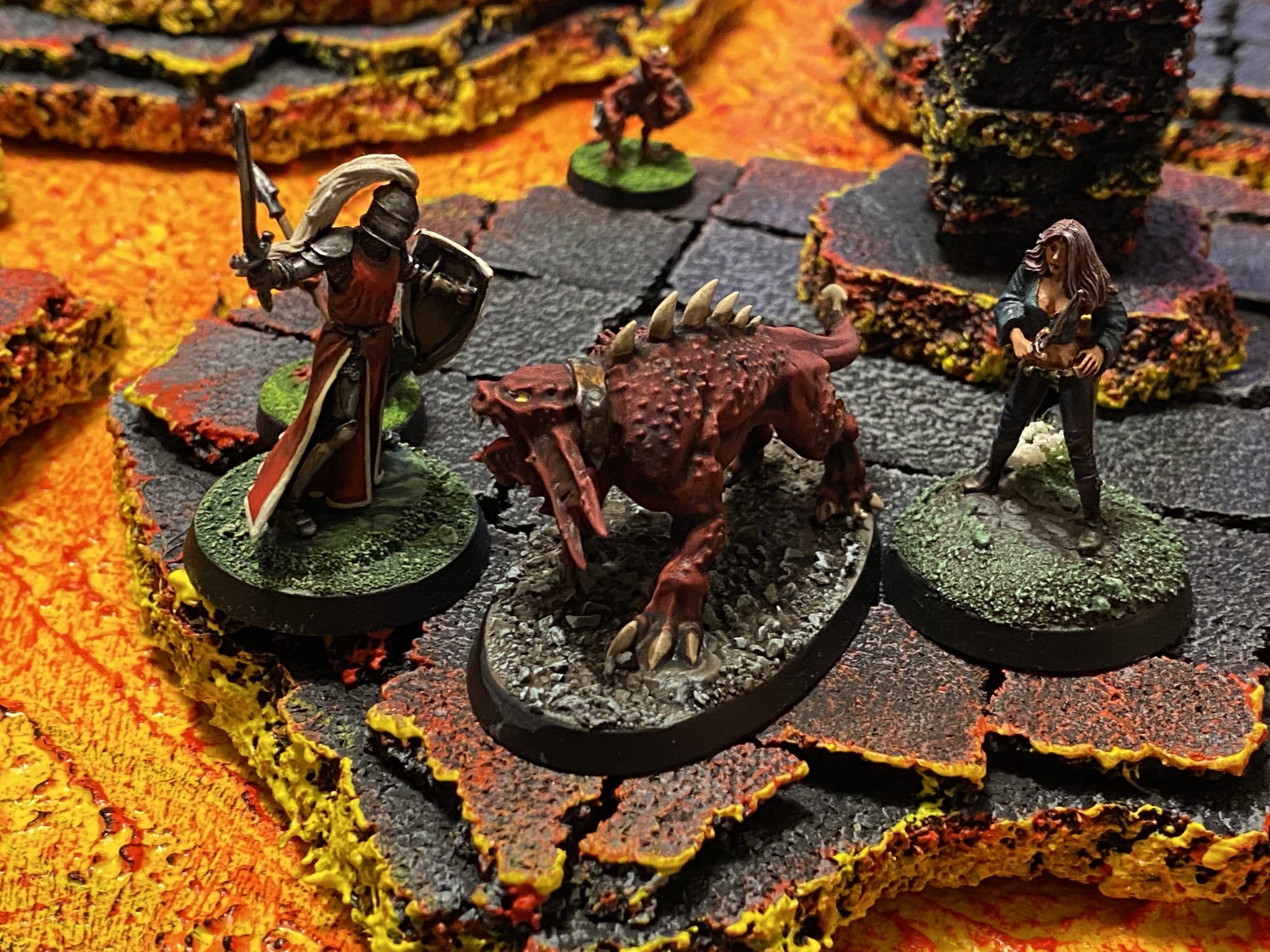 But to make matters worse, Krampus himself dropped his invisibility and attacked. 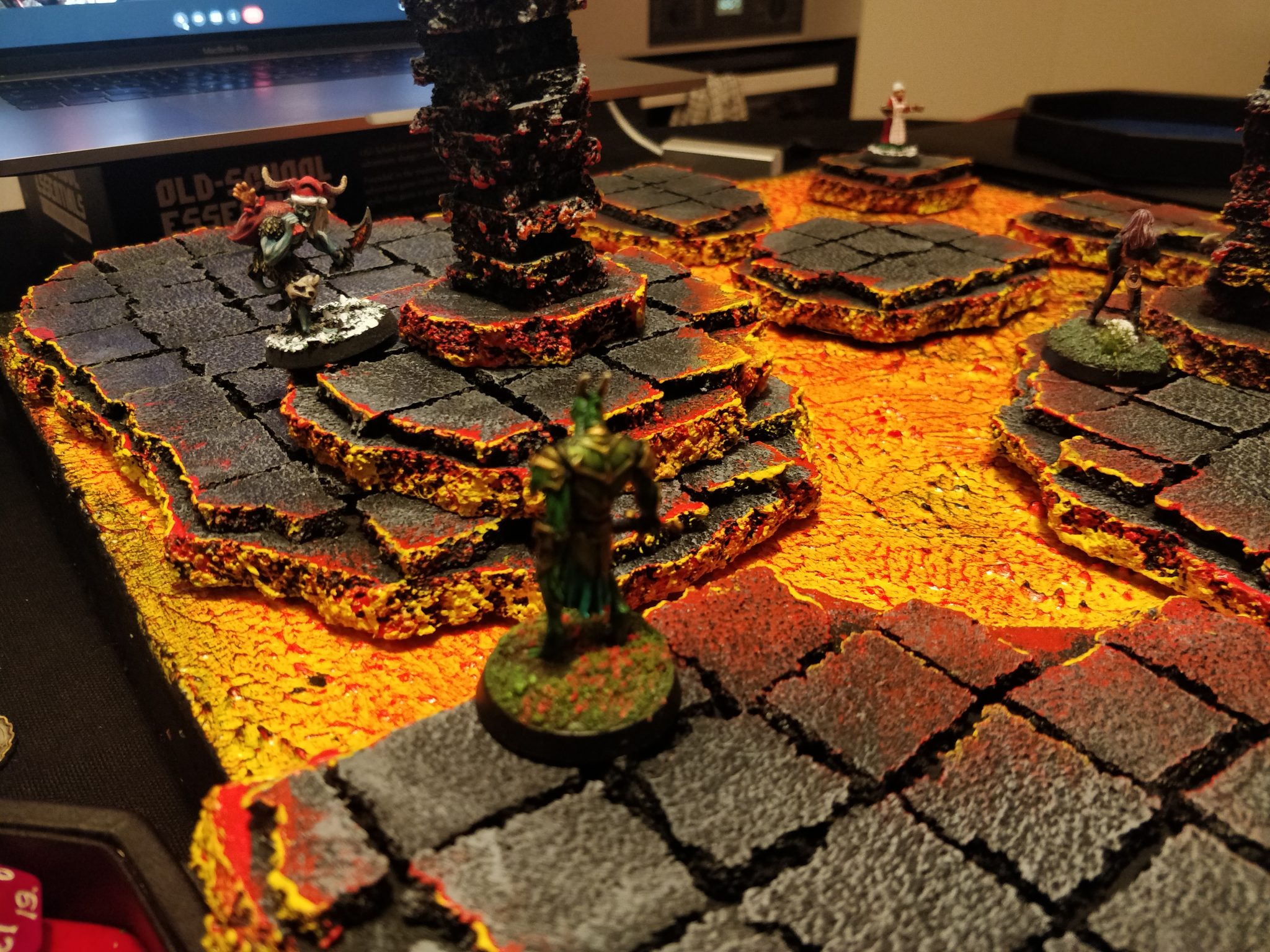 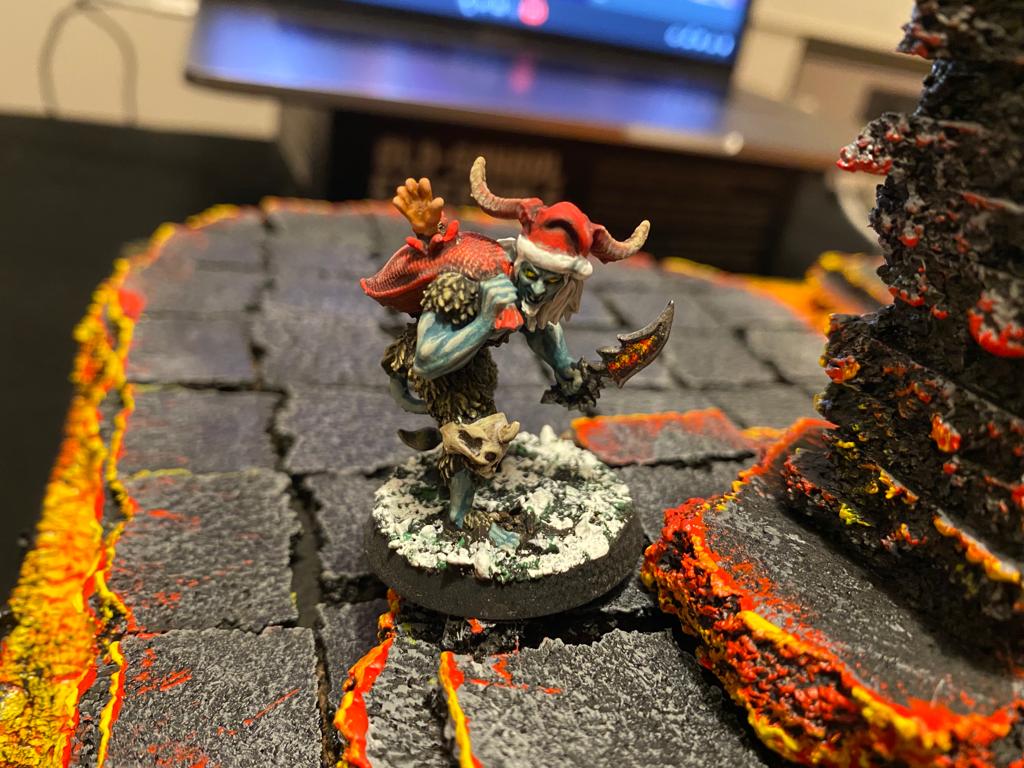 The heroes were victorious against the Hellhound and the Rogue dashed to Mrs Santa to help her escape.

Krampus in the meantime called for aid from Kobolds jumping out of the fire. 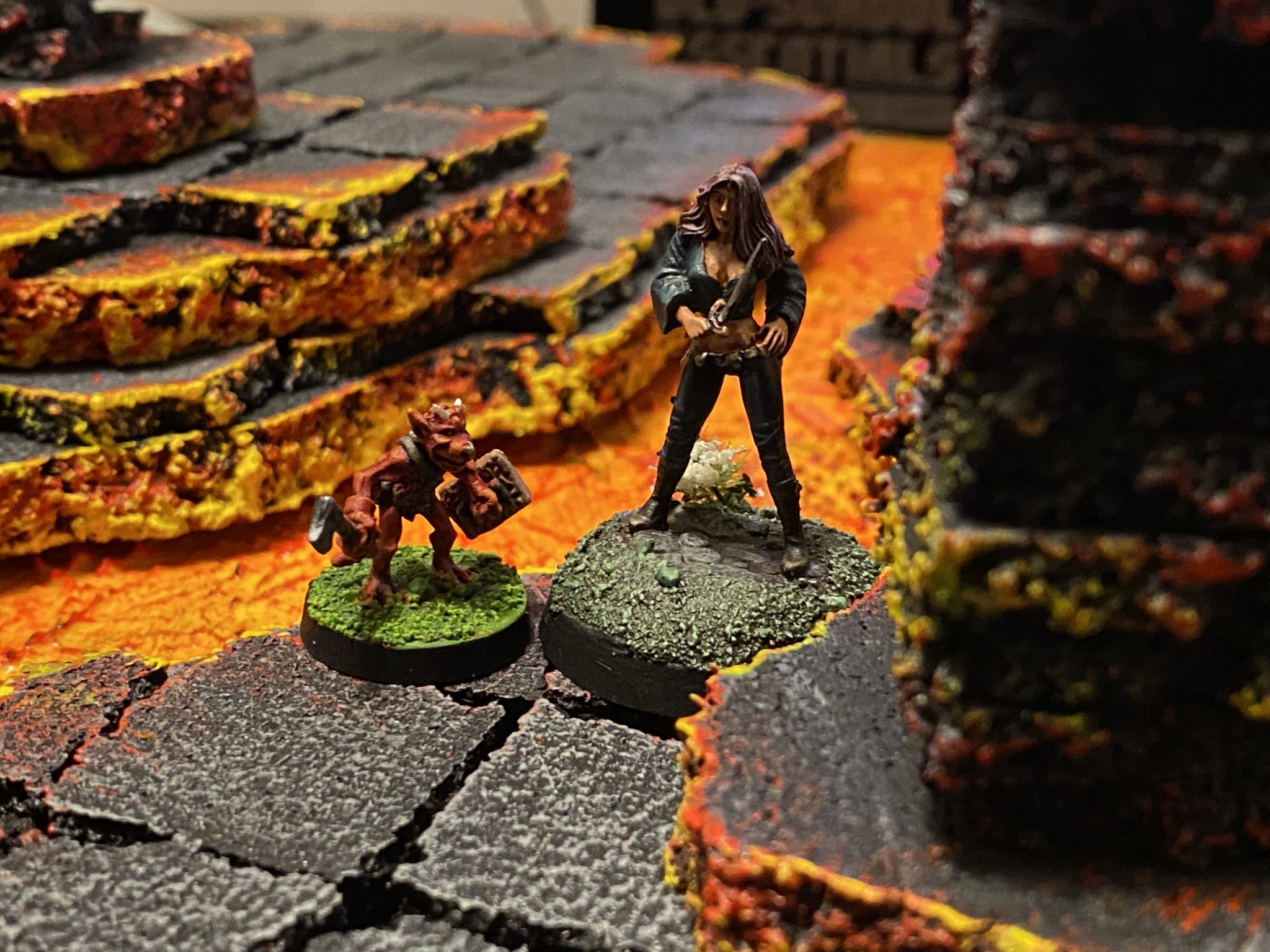 In the meantime Krampus used all sorts of sneaky tricks including Legendary Save, turning invisible again and stuffing the Fighter in his sack, but the combined ranged effort of Warlock and the Rogue destroyed hid sack releasing the Fighter and with that the heroes quickly overcame Krampus and destroyed his corporeal form only for his soul to vanish back to whatever hell hole he came from.

Winterfest was once again saved!

It turned out the woman in the bar had been Krampus in disguise using the heroes as a decoy while he kidnapped Mrs Santa.

The missing kids had in fact drowned falling through the icy surface of a lake in the forest. However, many suspected Krampus might have had a finger in the untimely demise of the two.

Great getting together with the old Nightshift Crew again. 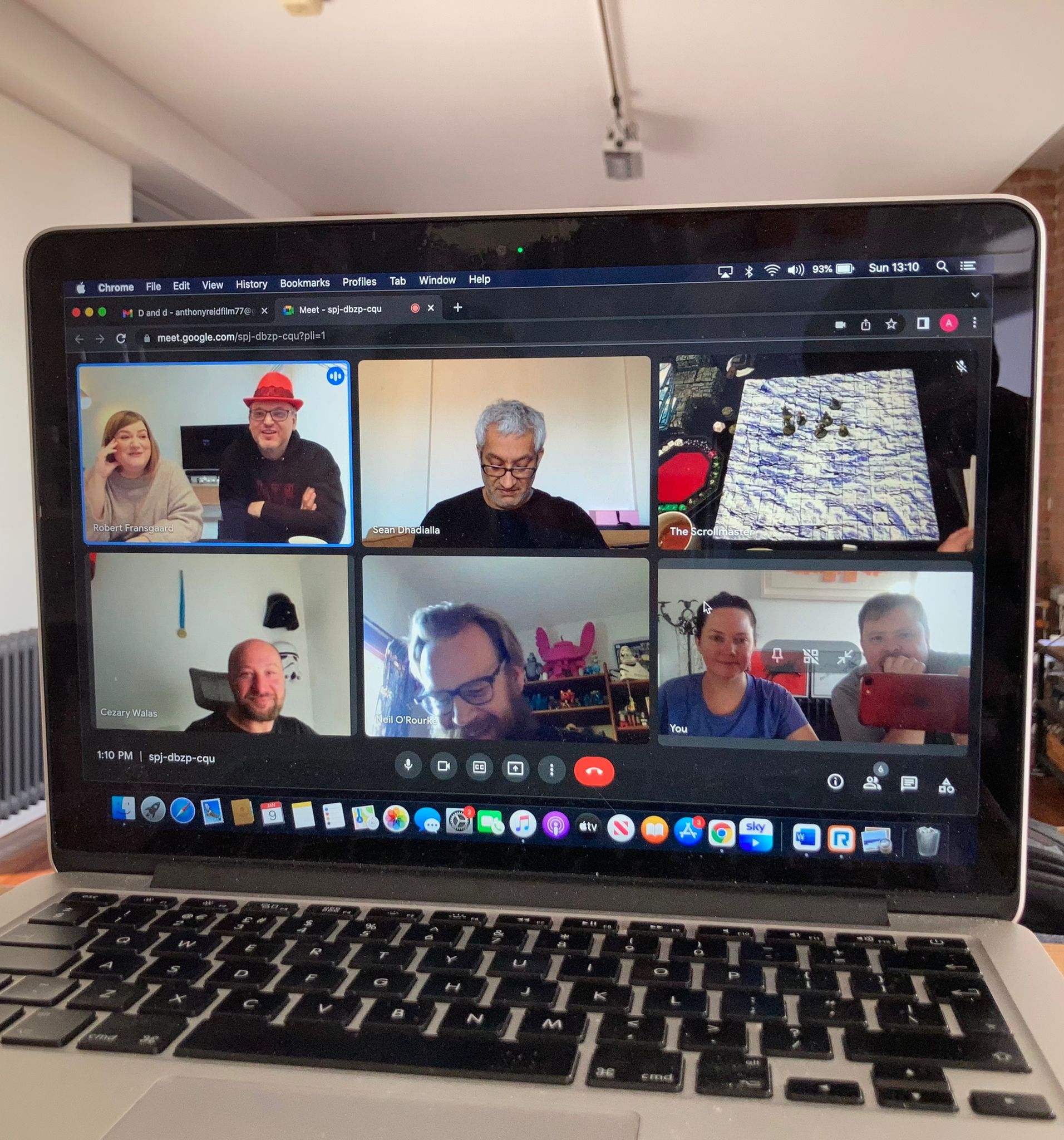 My wife helping with photos. 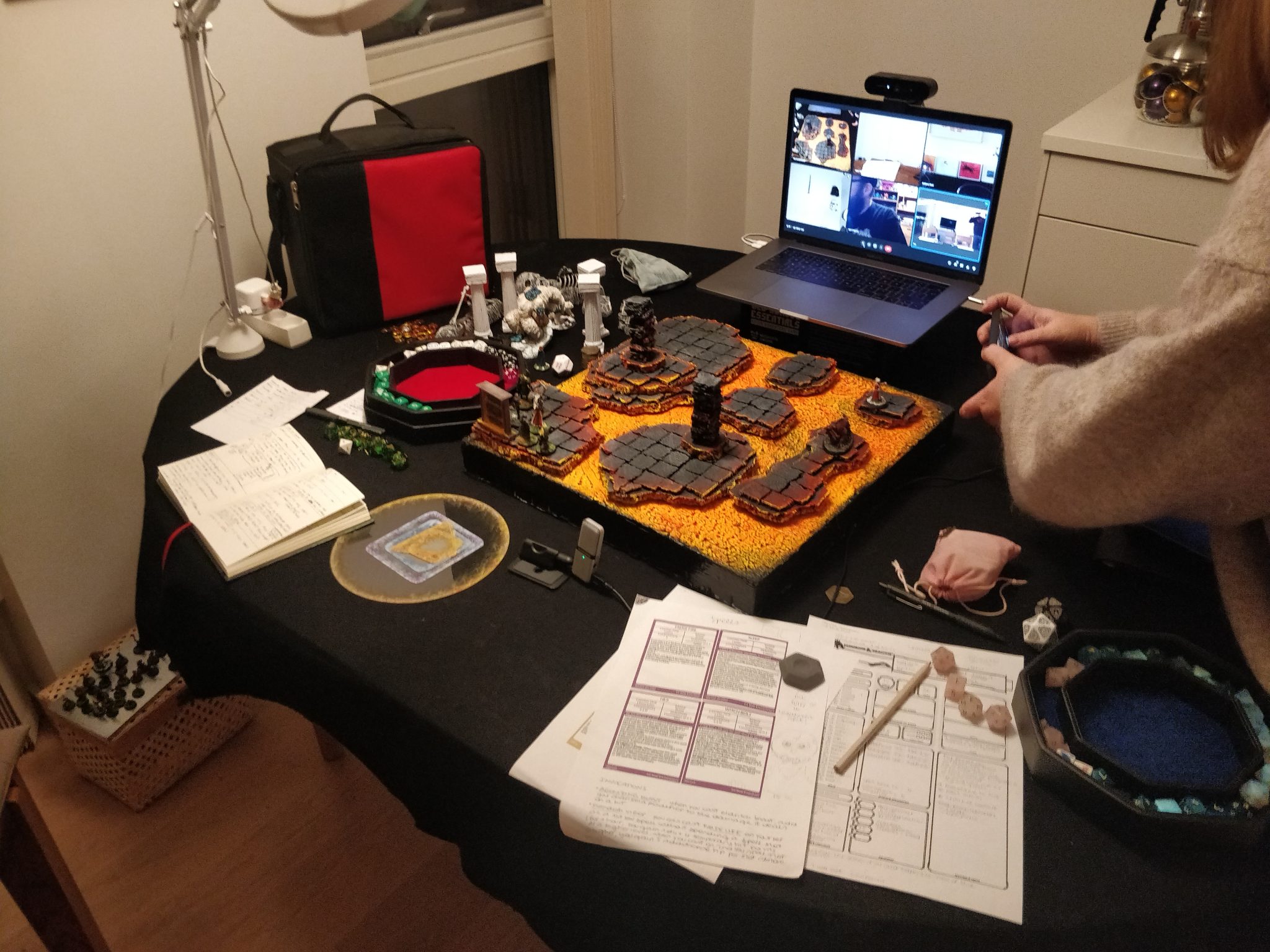 DM Note: I sometimes set up rooms the day before so I have photos of them for when I need to quickly set them up 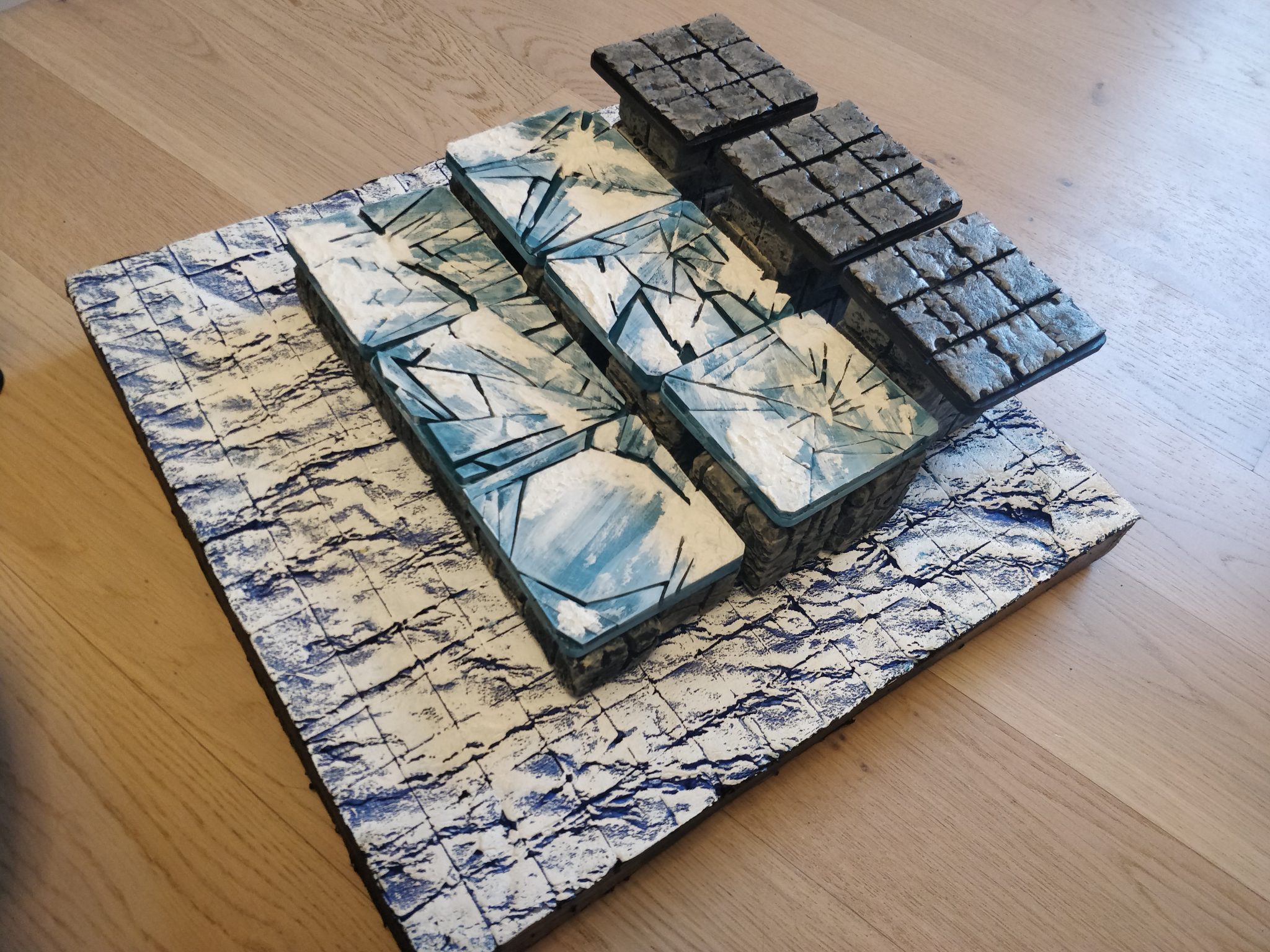 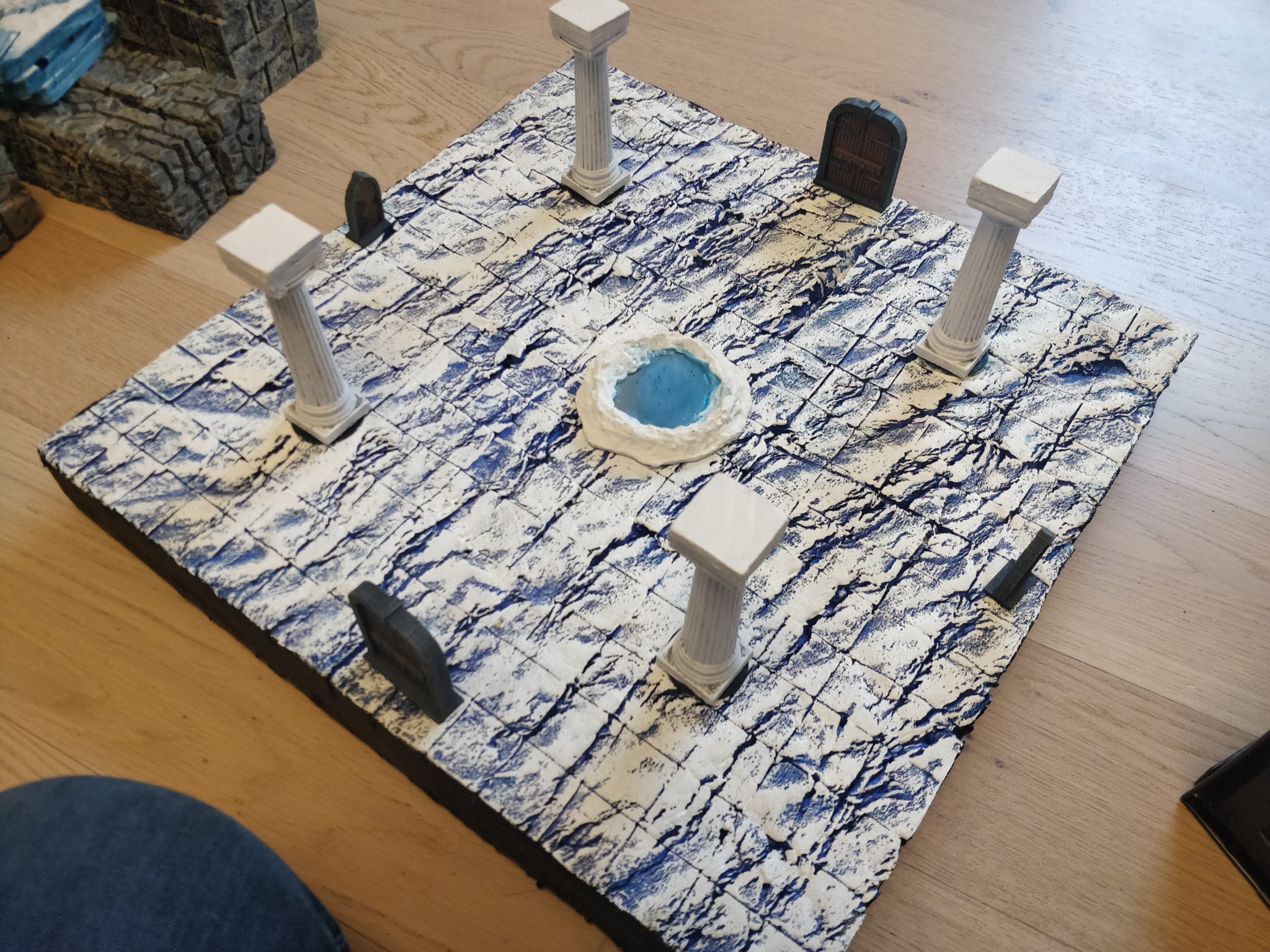 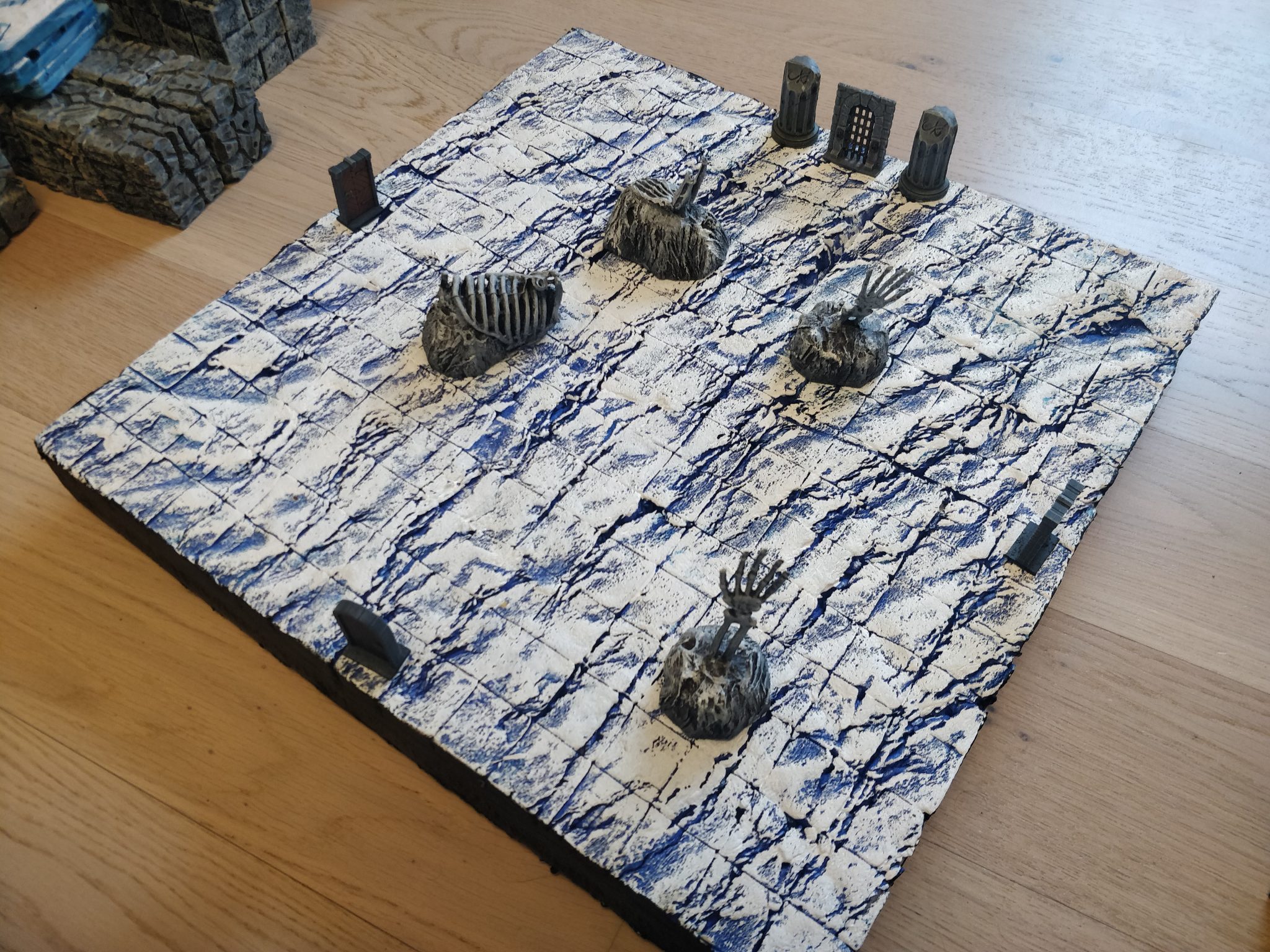 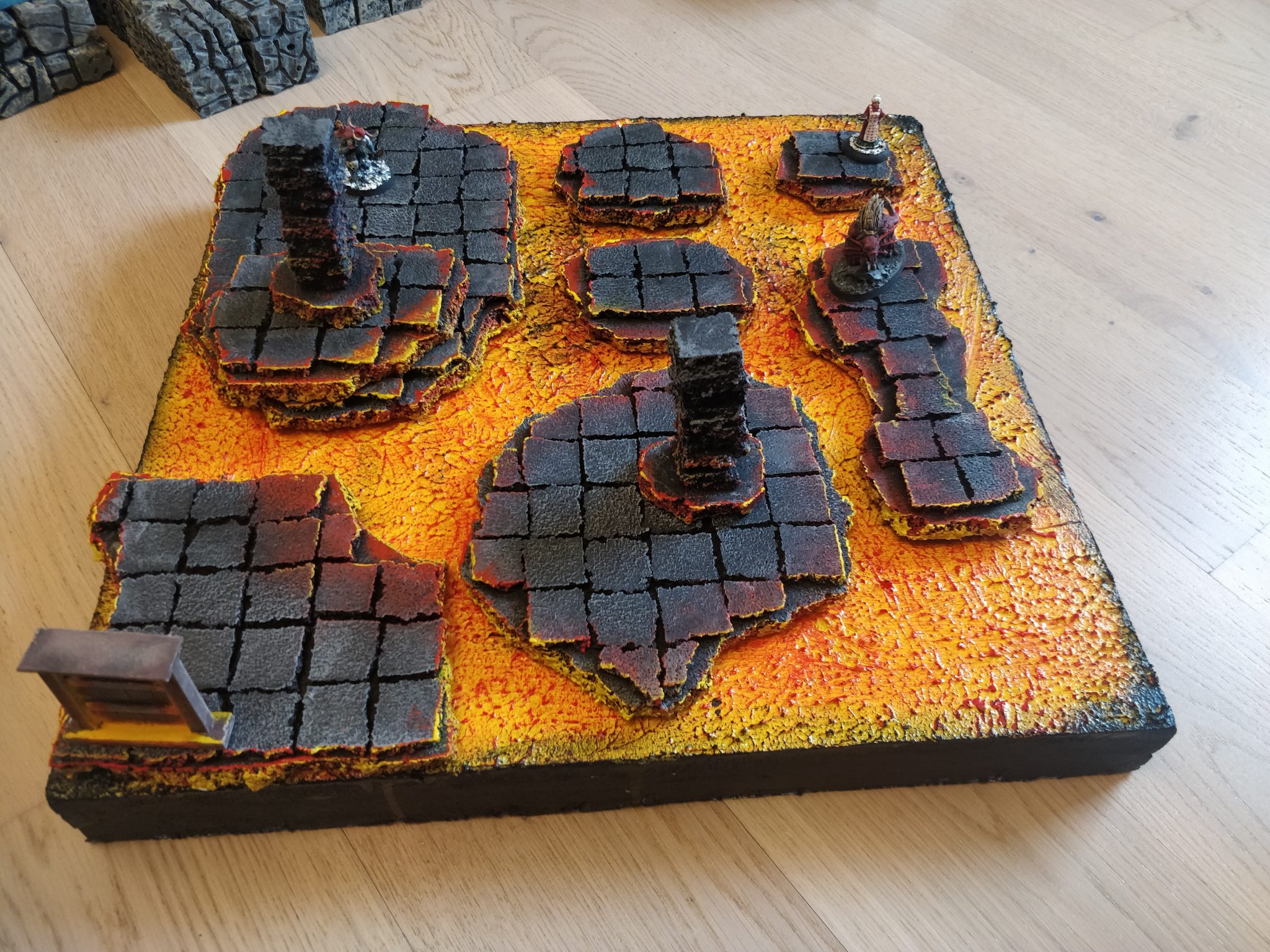