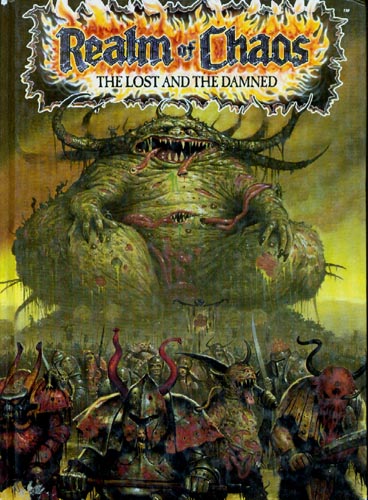 Running a campaign using the original Real of Chaos books

Two Rulebooks, both alike in dignity in the Realm of Chaos…

Before I begin I would like to point out that this is no ordinary campaign, this is a campaign for the advanced (and slightly mad) gamer.

Last year (2004) I ran a nostalgic Warhammer 40.000 Rouge Trader campaign called The Facility on ADX blue which was good fun and it reminded me of the old Warhammer Realm of Chaos Books.

Since then I have been playing around with running a campaign based on the Chaos Warband rules in those books and recently I decided ask the guys at the club whehter anybody would be interested and there were, more than I expected actually. But I wanted the campaingn to be for the hard-core gamer so I added a few rules whihc makes this campaign as much about converting and painting as playing the actual game.

Realm of Chaos – Snow White and the 7 Dwarves

Realm of Chaos – The suck lust of the bowel clap