Back to the Grim Darkness of a Far, Far Future…

Re-discovering Rogue Trader – A trip back in time. 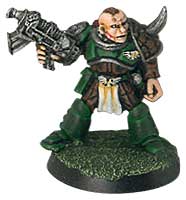 The last couple of months I have had this idea about bringing my old Realm of Chaos books to London and make some warbands and see if I could find anybody who would be interested in basically taking a 10 year step back in the Games Workshop time line.

So far it has stayed as a though, untill I ran into this thread where this bloke was trying to find if anybody still played the good old Warhammer 40.000 Rogue Trader rules (first edition of WH40K).

What I have decided to do is to make a Rogue Trader army regardless off whether I can find any other Rogue Trader players.

First step back in time: Rules

I was missing one important thing: Half of the original Rulebook! To those of you who weren’t around during the Rogue Trader days this may sound a bit weird, but the fact is that the very old Games Workshop books were very poor quality so they fell often apart when used, so when our Rogue Trader book fell apart, we put each page in a plastic pocket and put the whole rulebook in two folders where I have one and one of the guys I used to play with have the other.

Sadly I haven’t seen any of my old Rogue Trader team since we left high school in 1994.

Fortunatly, I found one really cheap on eBay (long live the internet). This in turn led me to doing some research to find out excately what books were published for the Rogue Trader system. You see back when I played in Denmark we bought whatever Rogue Trader books we could get our hands on but we didn’t have access to all of them so I really didn’t know what book were actually published.

Second step back in time: Miniatures 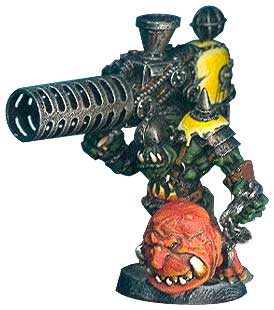 The minis I still have from the Rogue Trader days can be counted on one hand!

I used to have loads but the first bunch I had were Orks and when 2.edition came out, Orks were turned into a weak shadow of their Rogue Trader counterparts, so I simply sold the whole army off because I lost interest and respect for the Orks. I kept a few I used for my Warhammer Fantasy Battle.

I then started a Space Marine Army including a few Rogue Trader minis, but I sold off all my Space Marines recently since I haven’t played wh40k for over two years now. 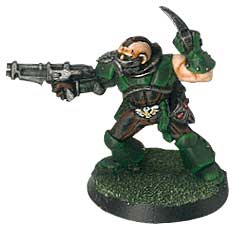 And I knew that even if I would ever start playing wh40k again I would never play Space Marines since I always fancy playing with armies that are a more uncommon sight.

While I think the current range of Games Workshop miniatures are very brilliant, some of them don’t really fit size wise to Rogue Trader miniatures, so I am trying to get my head around what army to do so I can find old Rogue Trader minis for that race.

Currently I am keen on either Squats or Orks. Squats because they are THE true Rogue Trader army, since they were never fully supported in 2nd edition and have been completely removed from third edition.

Orks because I truely love the Rogue Trader Orks, I think the rules along with Poul Bonner’s amazing drawings are rivaled in the Games Workshop world only by the Realm of Chaos Books…. also if I did an Ork Rogue Trader army I would buy one of the new Orks in Mega Armour and use it as an Ork Dreadnought.

Third step back in time: Painting the minatures

This sounds very simple, surely nothing has change, but things HAS changed. Games Workshop… well let’s face it they are not what they used to be!

But by freak coincidence I recently started painting a Dark Age force (you can see more on my Dark Age page) and my supplyer of Dark Age figures ( ArtemisBlacks.co.uk) also sells Coat D’arms paint.

Coat D’arms makes the paint originally used in the old, round, flip-lid Games Workshop Paint Pots and they still come in the same good old paint pots as well 🙂

Hmmmmm, that’s the hard part, but I guess it really does fit in with the true Rogue Trader spirit because back then I didn’t have a Games Workshop store close to me (they were just a store name in White Dwarf) so finding players now might actually turn out to be easier than 12 years ago 🙂