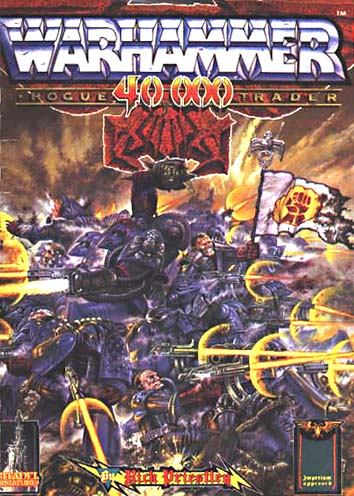 This is a list of Rogue Trader publications. All of which I own by now…. except the Book of Astronomican which I have managed to misplace ><

I have added comments in blue but other than that it is left as found.

This is the issue that launched Warhammer 40.000 Rogue Trader.

(The full text can be found at criticalhit.co.uk)

(Quote from Shadowdancers.org)
Started it all. Originally slated as a Roleplaying Game with strategic elements, the RT provided a unified equipment cost for all weapons and technologies. Race creation was included with this system.

Chapter Approved – Book of The Astronomican

(Quote from www.eldaronline.com)
The “you’ll-never-in-a-million-years-find-this-book” and yes, I do own it. Loads of stuff about the original Eldar Pirate forces (circa 1988!) Pirates could take squads of Zoats, (yes, I own about 20 of these too!) Did you know that the original Swooping Hawks were actually guardians with what looked like a pair of dragonfly wings mounted on their backs? Now you do.

(Quote from www.eldaronline.com)
An even earlier collection of WD articles (than the compilation further down the list), but includes all the original works on the Harlequins, their history, mythos and details of the Dance of Asuryan.

A must-have for any respectable Harlequin player. You’ll also find the original rules and background for Eldar Dreadnaughts, including the Vampire class Dred (they weren’t called Wraithlords back then) and the Eldar Assassin “robots” that later evolved into the Wraithguard.

(Quote from Shadowdancers.org)
“Slaves to Darkness” was the first ‘adult media’ GW produced. They should have stayed with it. The system is a crossover for Chaos in the WH Fantasy and 40K worlds. It contains rules for the Khorne and Slannesh Armies, as well as the most detailed (d1000) chaos rewards chart I’ve ever seen. Rules for Possession and the Ordo Malleus also adorn these pages.

(Quote from Shadowdancers.org)
“The Lost and the Damned” was the second “Realm of Chaos” hardback. It contained detailed accounts of the Horus Heresy, the Emperor’s last battle, and army lists for Nurgle and Tzeentch. Most interesting were the rules for the Sensei, blood-kin children of the One true Emperor.

(Quote from Shadowdancers.org)
aka “The Rare Golden Book”, contains the rules for Assault Terminators, Chaos Terminators, Grey Knights, Eldar (history and army list), Genestealers, and a change in the basic Marine profile from T3 to T4 and +1 Ws.

(Quote from Shadowdancers.org)
“Waaargh: Orks” was a VERY detailed sourcebook on Ork Kulture. It contained NO RULES, but added immensely to the character of the Ork race. Ork tactics such as trade and vassalship are discussed.

I think Paul Bonner’s drawings in the two Ork books captured not as much the battle field action, but more of the Ork’s society and everyday life. An aspect of the game that has been lost over the years which is a shame a big, big shame.

(Quote from Shadowdancers.org)
“Ere We Go” is the first proper Ork Codex, setting a precident for detail and scope that would follow all army lists to follow. It detailed Ork technology, weapons, bionic gear, and was filled with fiction that is still reprinted in Ork publications today.

(Quote from Shadowdancers.org)
In an attempt to fix major problems with the system (vehicle toughness and mass combat), the “Battle Manual” was released. It included new profiles for all weapons, new Hand to Hand rules, and overwatch.

It is mentioned in the quote below that “The Battle Manual” and “The Vehicle Manual” were sold tohgether but I know they were sold seperatly in Denmark.

(Quote from Shadowdancers.org)
Packaged with the “Battle Manual”, the “Vehicle Manual” revolutionized the system by adding threshold penetration to vehicles. The penetration of each weapon was formula based, so it remained compatible with all variations of the system.