The heroes jumped through the icy portal in pursuit of the Winter Queen, the alleged killer of the Dwarven Barbarian Grimshaw’s Aunt.

As they looked up in the blizzard, they saw a clothed rabbit and an old friend, Feather the Tabaxi Cleric, who sacrificed himself by activating a magical item that rewound time to give his fellow heroes the upper hand against Jethrolar the Blind Beholder.

In doing so, he disappeared from their memories and was lost in time.

Here he was shown when and where to wait for his friends, but at a high price: He paid with his name and memories. 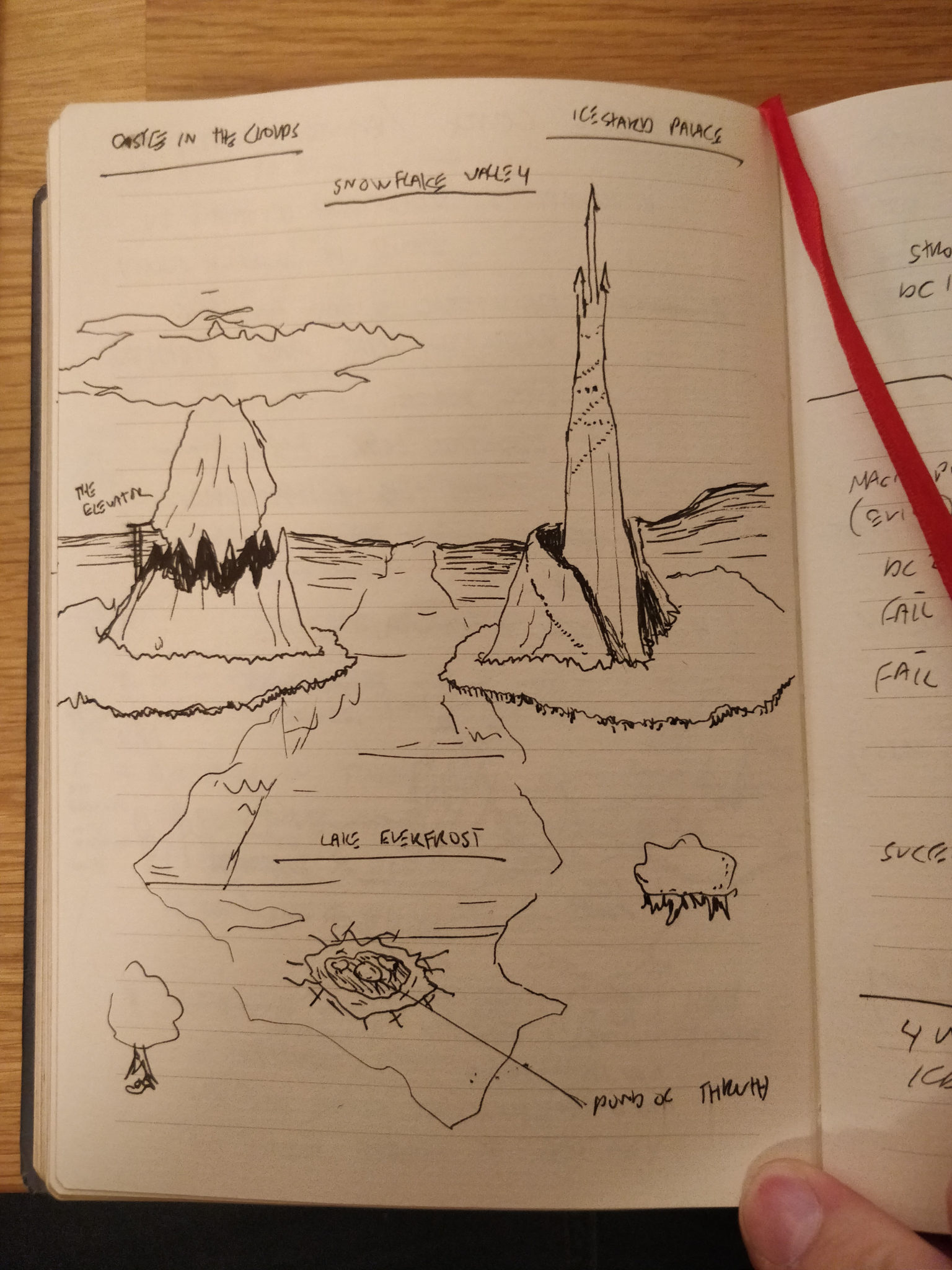 The motley crew followed Mr Rabbit back to his house to seek shelter from the blizzard.

Here a good-hearted Grimshaw gave some of his powerful health to the sickly rabbit who gratefully told the heroes about the lands surrounding them.

The heroes found themselves in Snowflake Valley with Lake Everfrost in the centre. To one side was The Castle in the Cloud, the home of The Mountain King and to the other side, The Iceshard Palace, home to The Winter Queen.

After catching up, the heroes went to sleep.

The next day the party realised that it was still night.

Starring up at a constantly moving starry night, with no moon in sight, the party said “goodbye” to Mr Rabbit and headed for the home of the Mountain King to make a friend of their enemy’s enemy.

Traveling through the Fey Forest was cold and frustrating and progress was slow.

Shout out to the amazing book Monsters of Feyland for Log Shadow.

The heroes came upon a simple log with an unusually dark shadow. A rash action from Grimshaw put him in contact with the Log Shadow who teleported him to another log at the edge of the forest.

But through some friendly negotiations, the party managed to persuade the Log Shadow to bring him back and in the process learn of the Pond of Truth located somewhere on Everfrost Lake, a foul-minded entity with a vast knowledge.

The party continued their trek towards to  Mountain King’s home.

Invisible Cat in the Tree

As the heroes neared the edge of the Mountain King’s mountain, they realised the actual mountain floating over the ground. While pondering on next steps, they saw a fey creature attempting to clim a tree, but failing badly.

It turned out the fey’s invisible cat had climbed the tree.

Feather, with his Tabaxi skills, easily climbed up with the Fey on his back to retrieve the invisible cat.

As a thank you, the Fey told the party that there was to his knowledge two ways up to the Mountain King’s Castle: The Giants’ Elevator and the Temple Ruins, which he suggested may take the party straight to the elevator hopefully bypassing the giants guarding it.

DM notes: Given the chaotic and unreliable nature of the Feywild, I tried a new way of managing the game using individual cards for different encounters and locations to adapt to player choices. This is pretty much close to 100% sandbox and I am positive after this first “prototype” so will continue this. Below is the encounter card for the Temple Ruins, which is inspired by an encounter in the Icewind Dale: Rime of the Frostmaiden book. 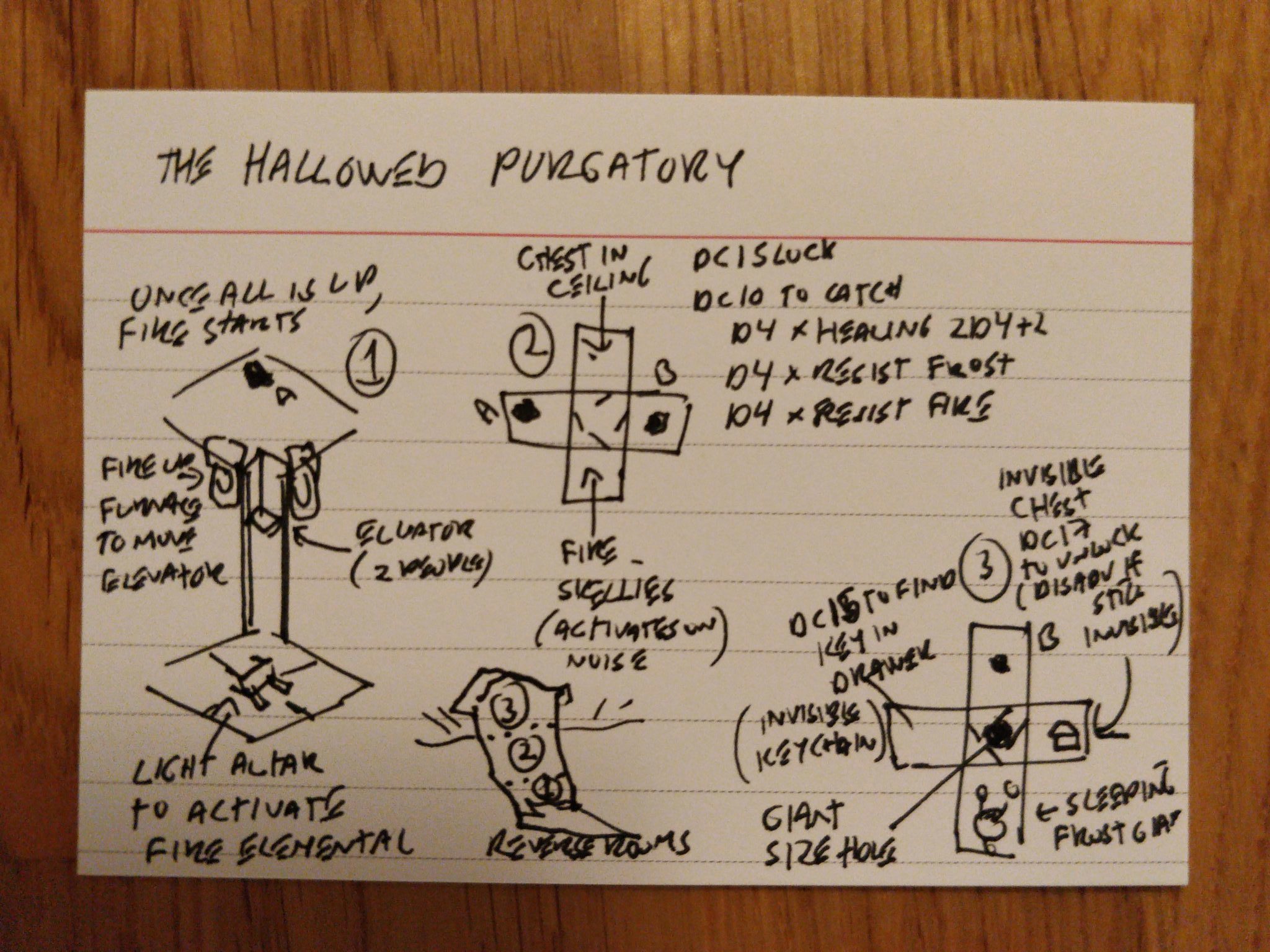 The party quickly realised the template Ruins were upside down. Starting essentially as the top and working their way up to the ground floor.

At the top floor, the party found a non-active elevator. B.J. the Sorcerer sent her Pseudo Dragon up to investigate what was beyond the elevator, only to find it killed and soon after it was raining with Fire Skeleton Warriors.

The heroes fought and defeated the Fire Skeletons, but nor before they stopped the accidental summoning of a Fire Elemental. 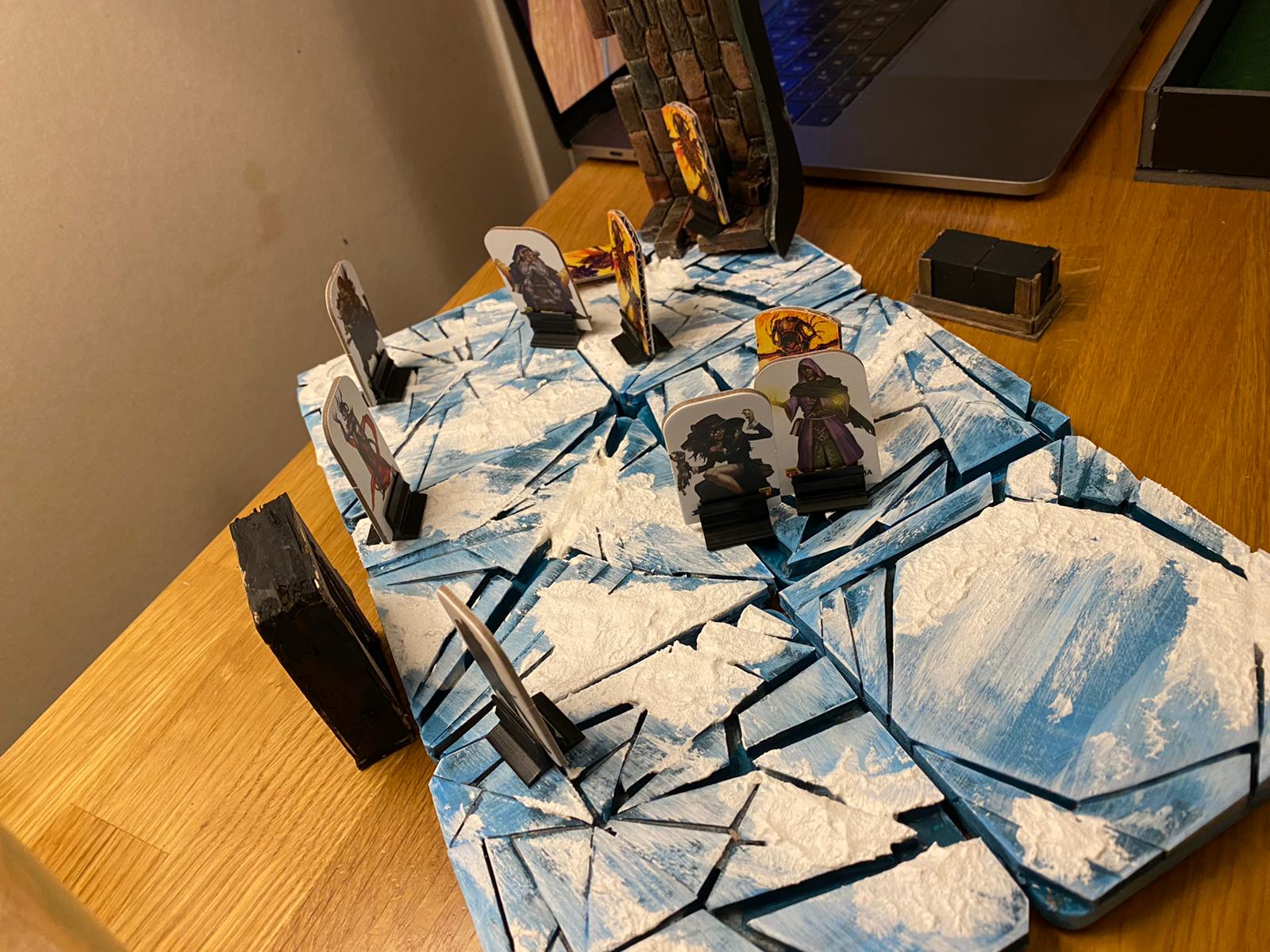 DM Notes: While my miniatures are packed away, I am using Pathfinder Pawns, but I augmented them with cutout, Magic The Gathering Cards. 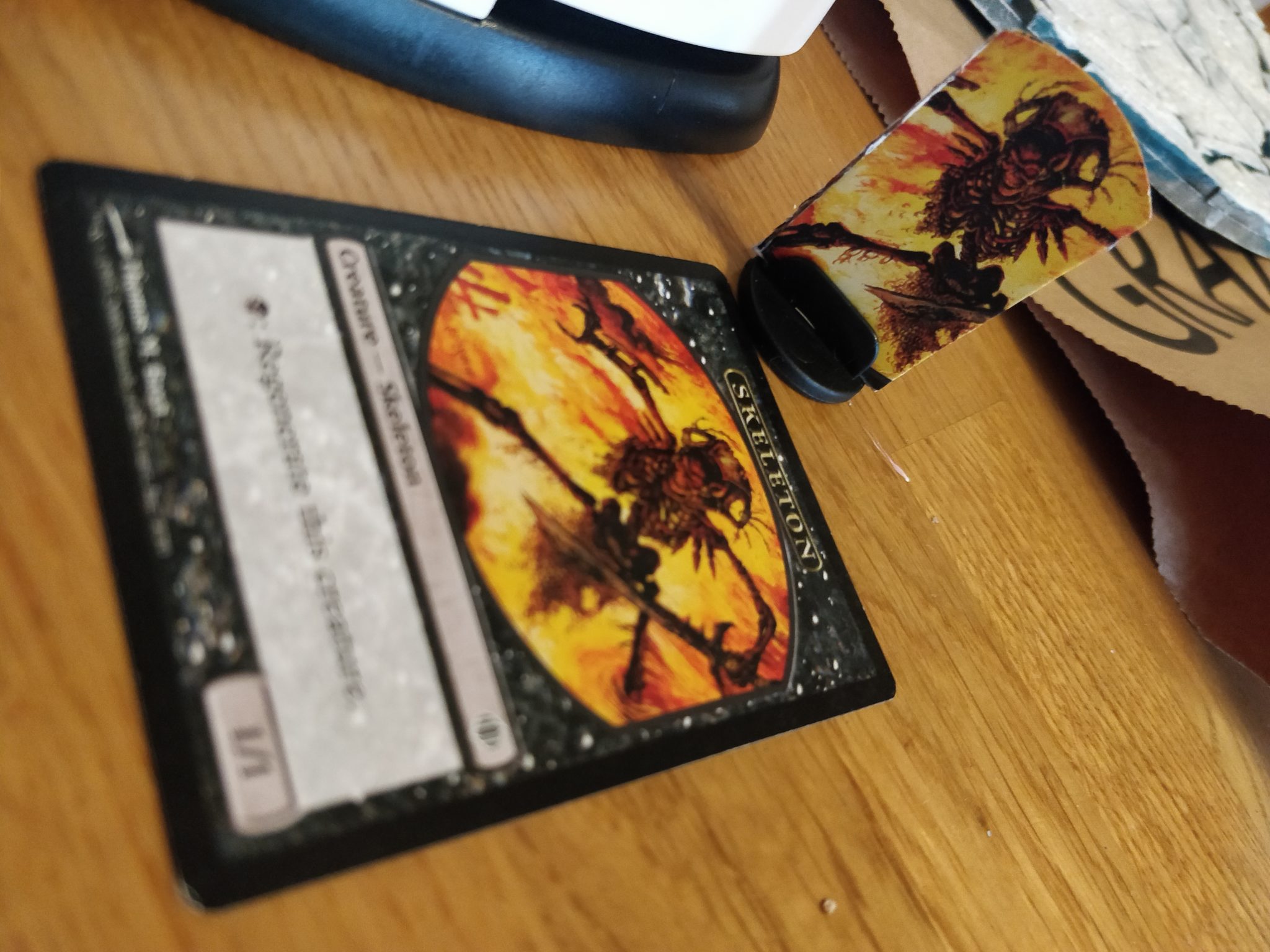 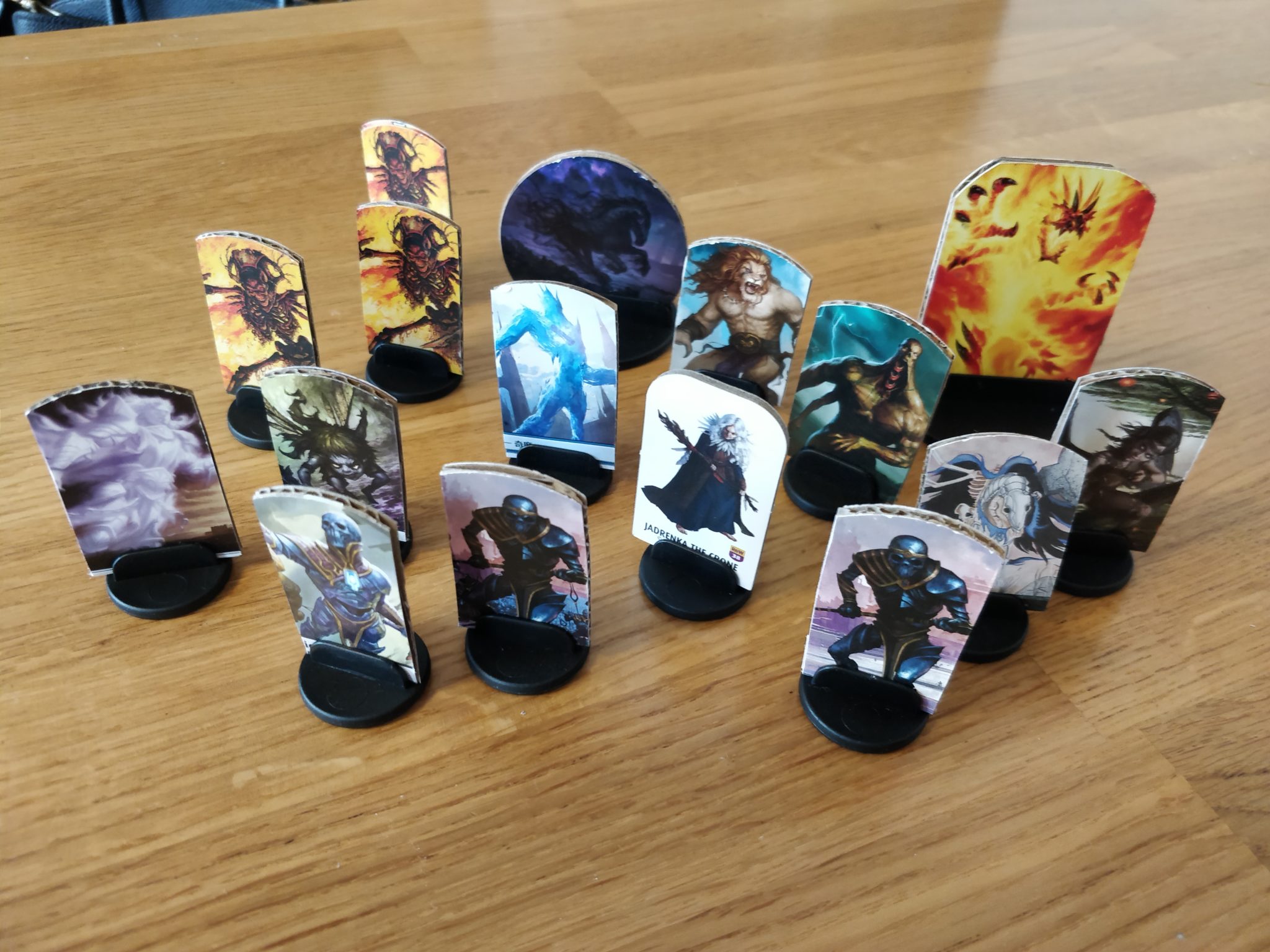 At the Second floor, the party found a chest nailed to what used to be the floor and formed a human pyramid to unlock the chest (loved this!). The first attempt failed miserably, but second time was a success and the party found a stash of potions. 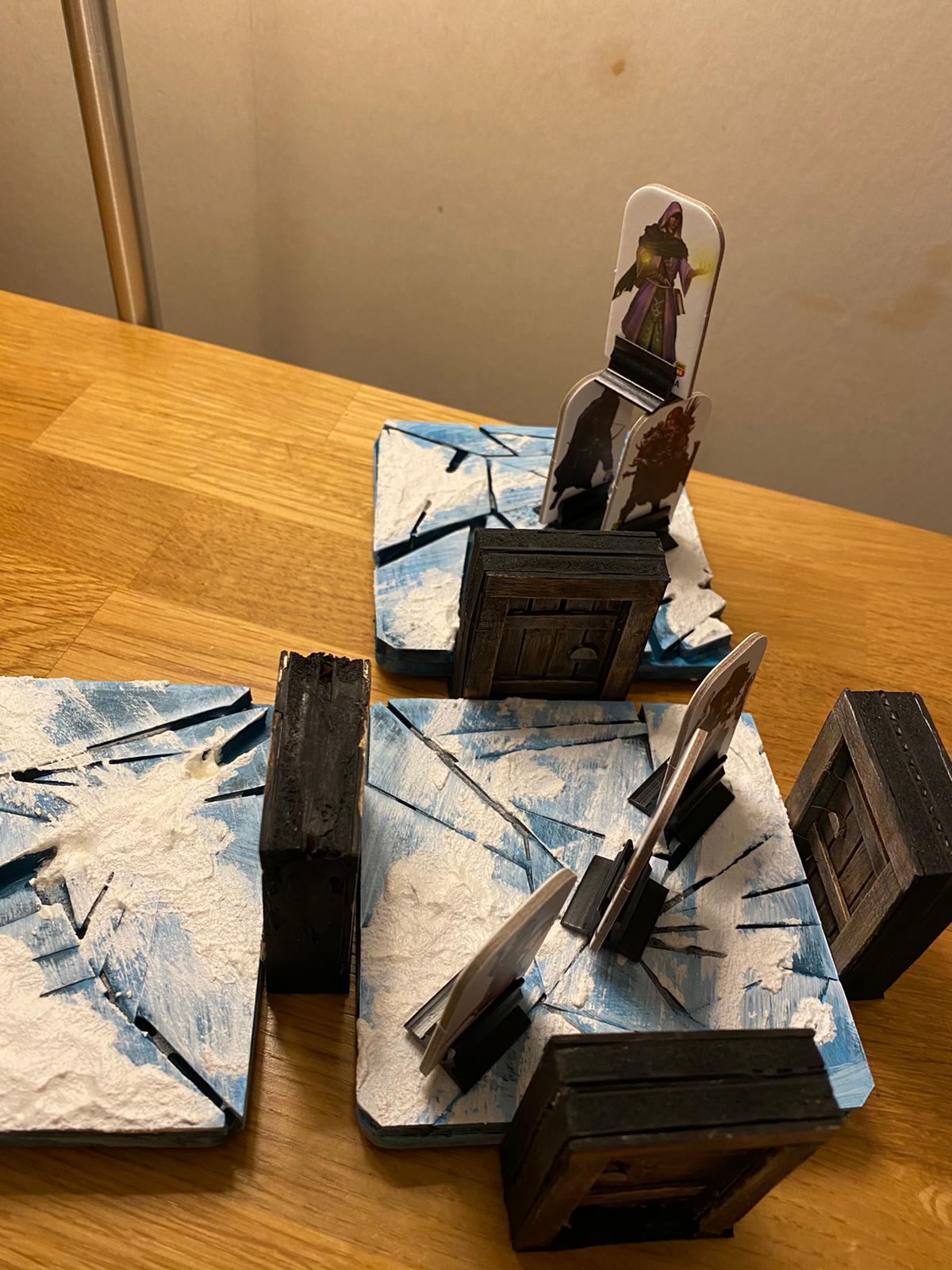 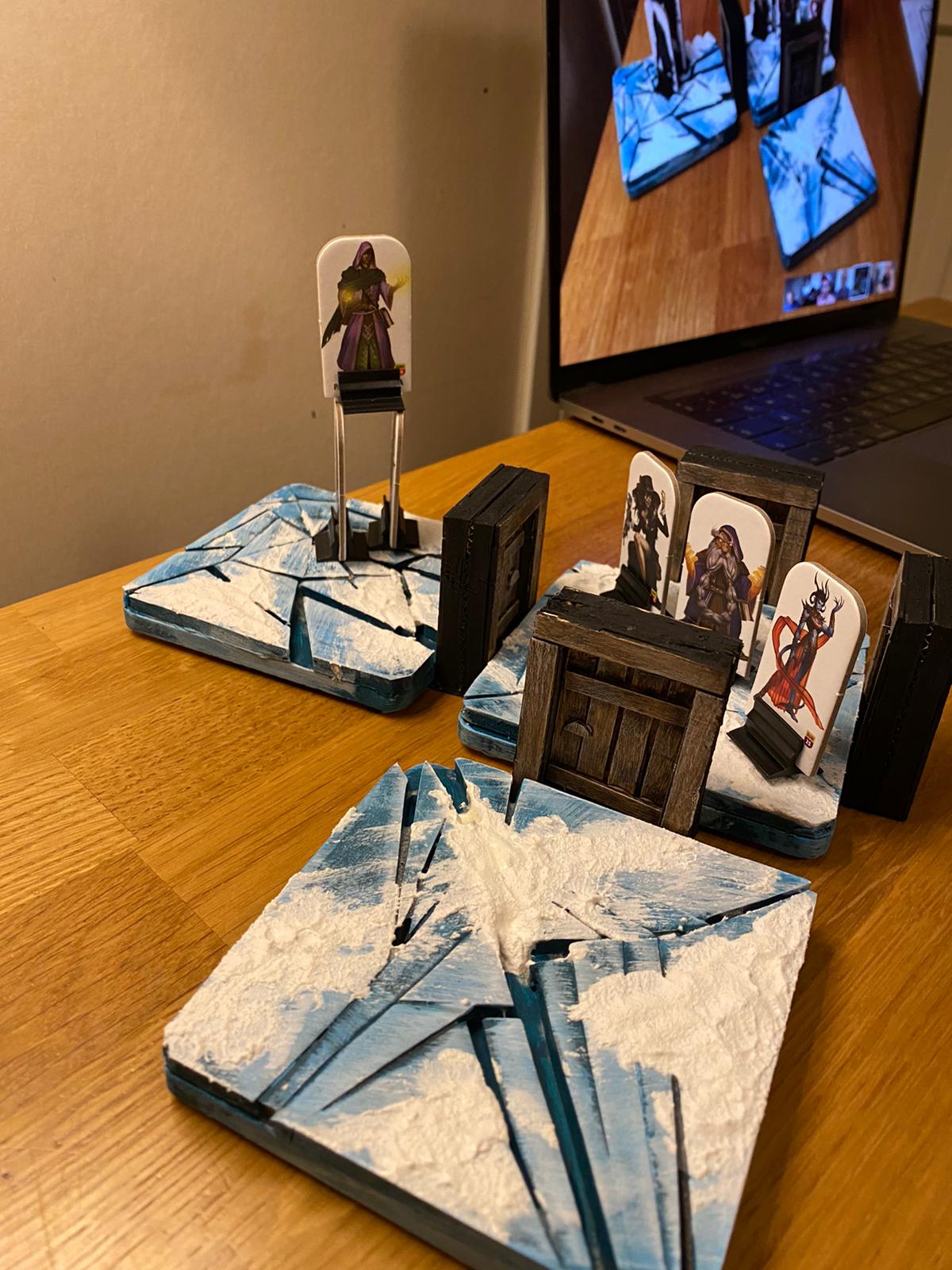 At the next floor, the party chrashed in on a sleeping Frost Giant Guard, who stood no chance against the battle hardened adventurers.

Looking through the rubbles, Alyanys found an invisible key and the party set to work to find the chest, but without any luck.

Then Feather remembered he new Detect Magic and suddenly the party had a much clearer indication of where the invisible chest was and found it in no time. And their hard work paid off as they found a treasure throve of magical items. 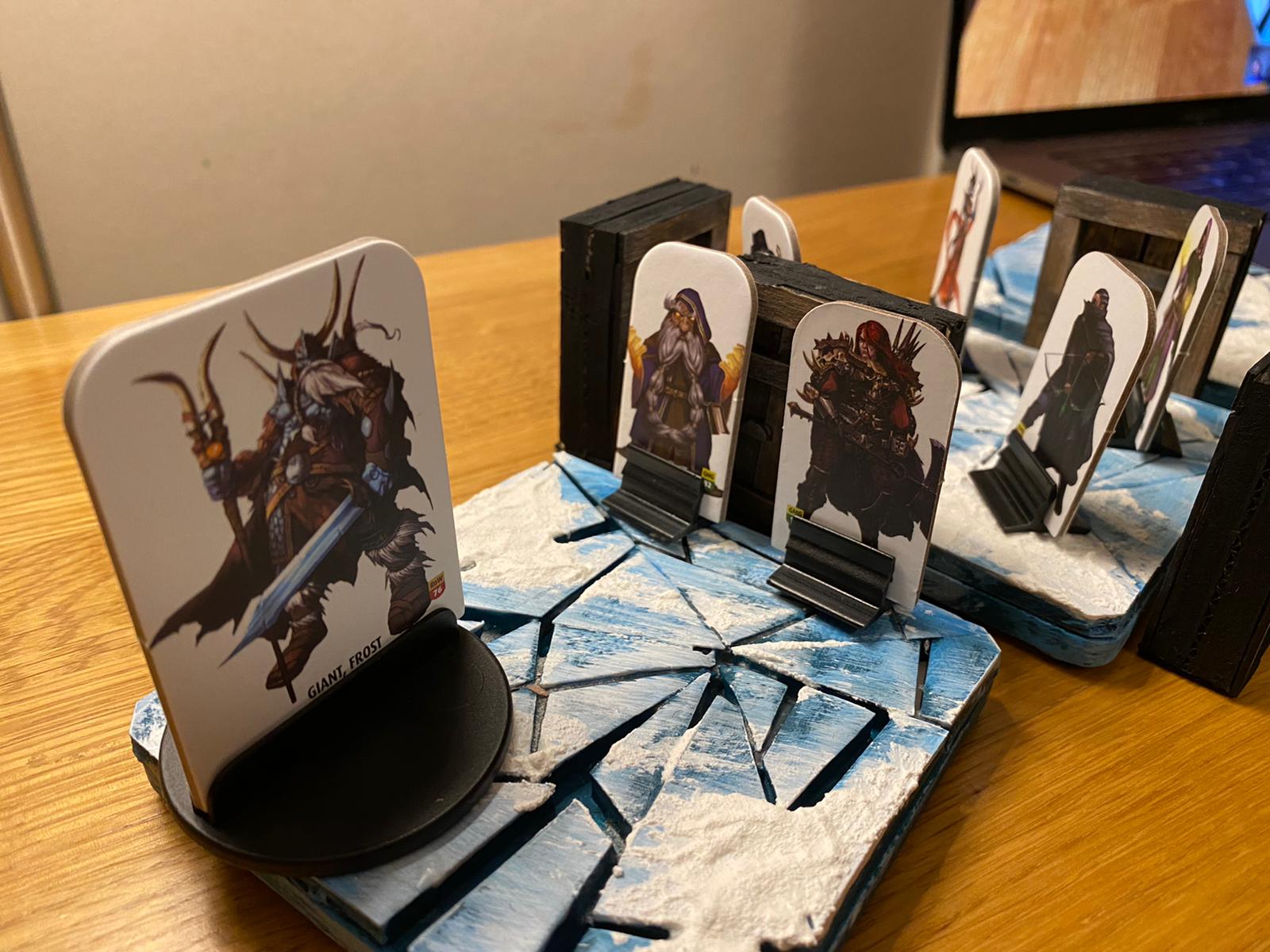 The heroes felt the ruins where now safe to rest and decided to get some well-deserved sleep.

As they woke up, they made it out of a natural hole in the floor of the upside down ground floor and a giant sized tunnel leading up and under the giant elevator.