When we left our heroes, they had made it up under the Frost Giant elevator that would (hopefully) take them up to the Castle in the Sky, the home of the Mountain King, who they intended to enlist as an ally in the fight against the Winter Queen.

While we are playing online, my wife is with me in person helping take photos of the game. Here she is setting up her Paladin. 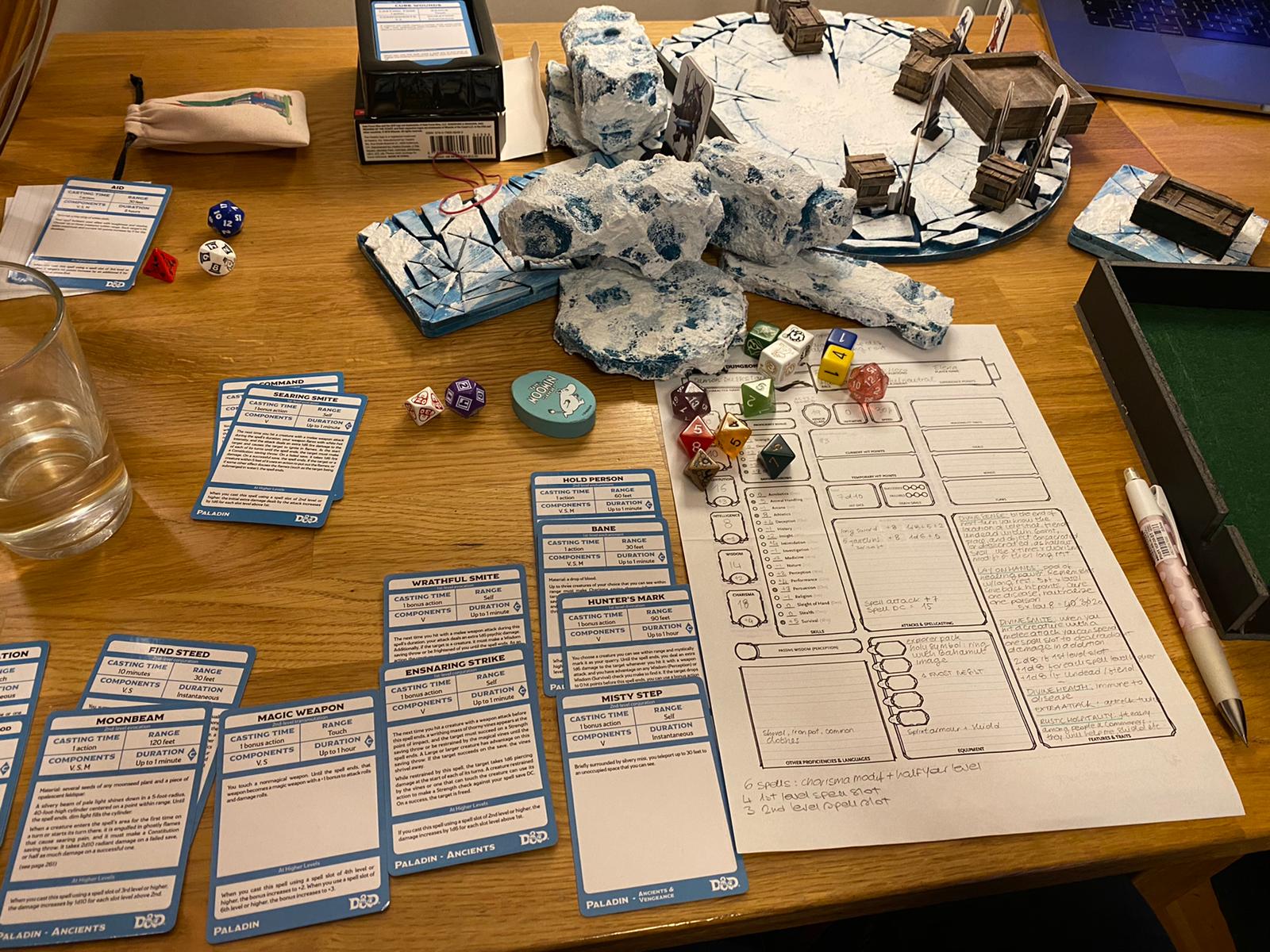 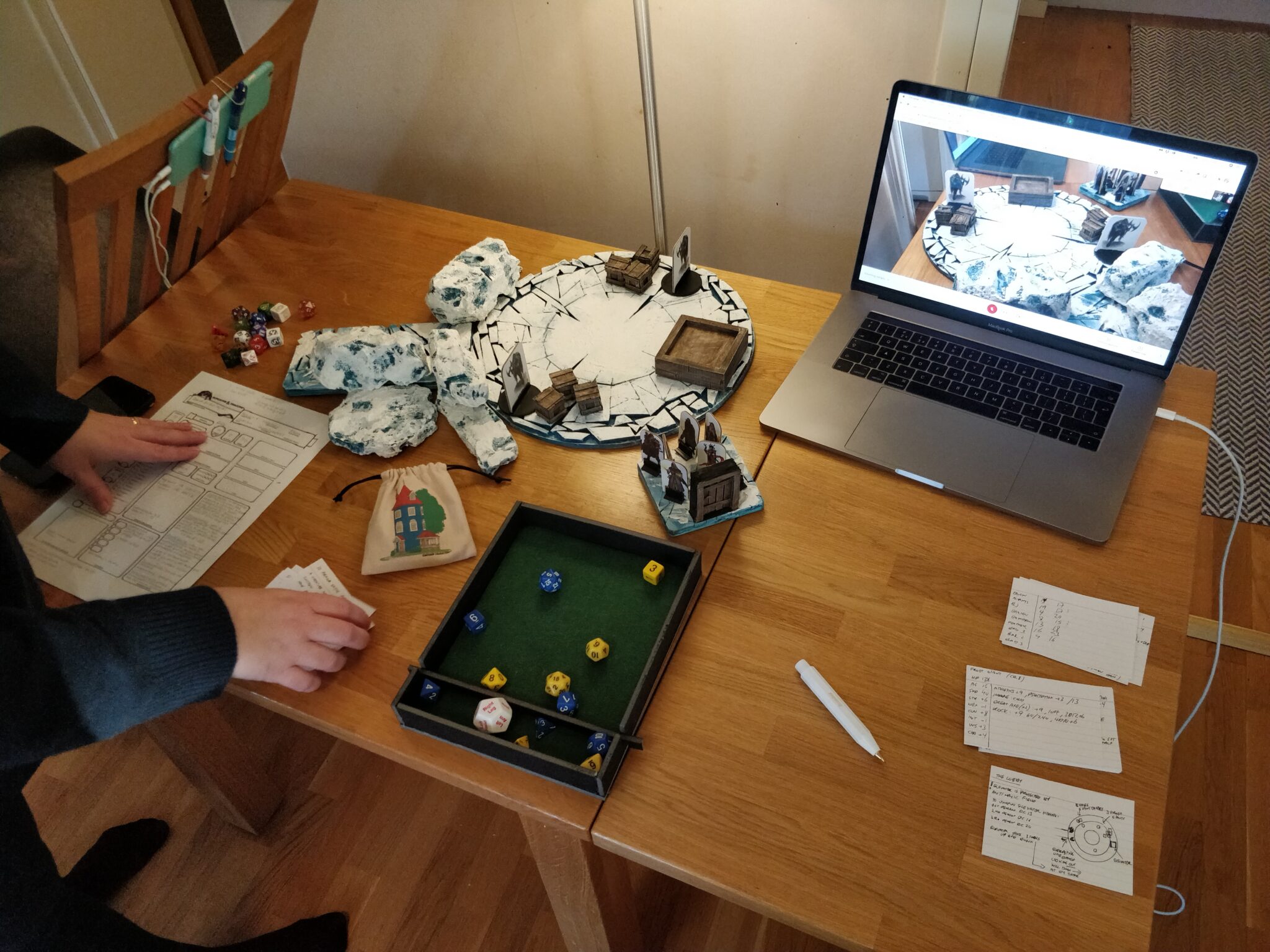 Having rested up underneath the elevator, the party decided to take a peak to see what was up at the ground level of the elevator shaft.

The Frost Giant workers roared in anger and called for aid, while buying time by throwing crates at the heroes.

Just when the Frost Giants were most in need, the Everlasting One assigned to guard the main road made it back up to aid his comrades.

But Alyanys the Warlock cast a wall of Fire preventing the mutated Frost Giant from coming to the other Giants’ aid and watched as the Giants were slayed by our heroes.

Having burned himself on the flames, the Everlasting One realised he wasn’t regenerating form the damage and instinctively he realised retreat was the better option and fled. 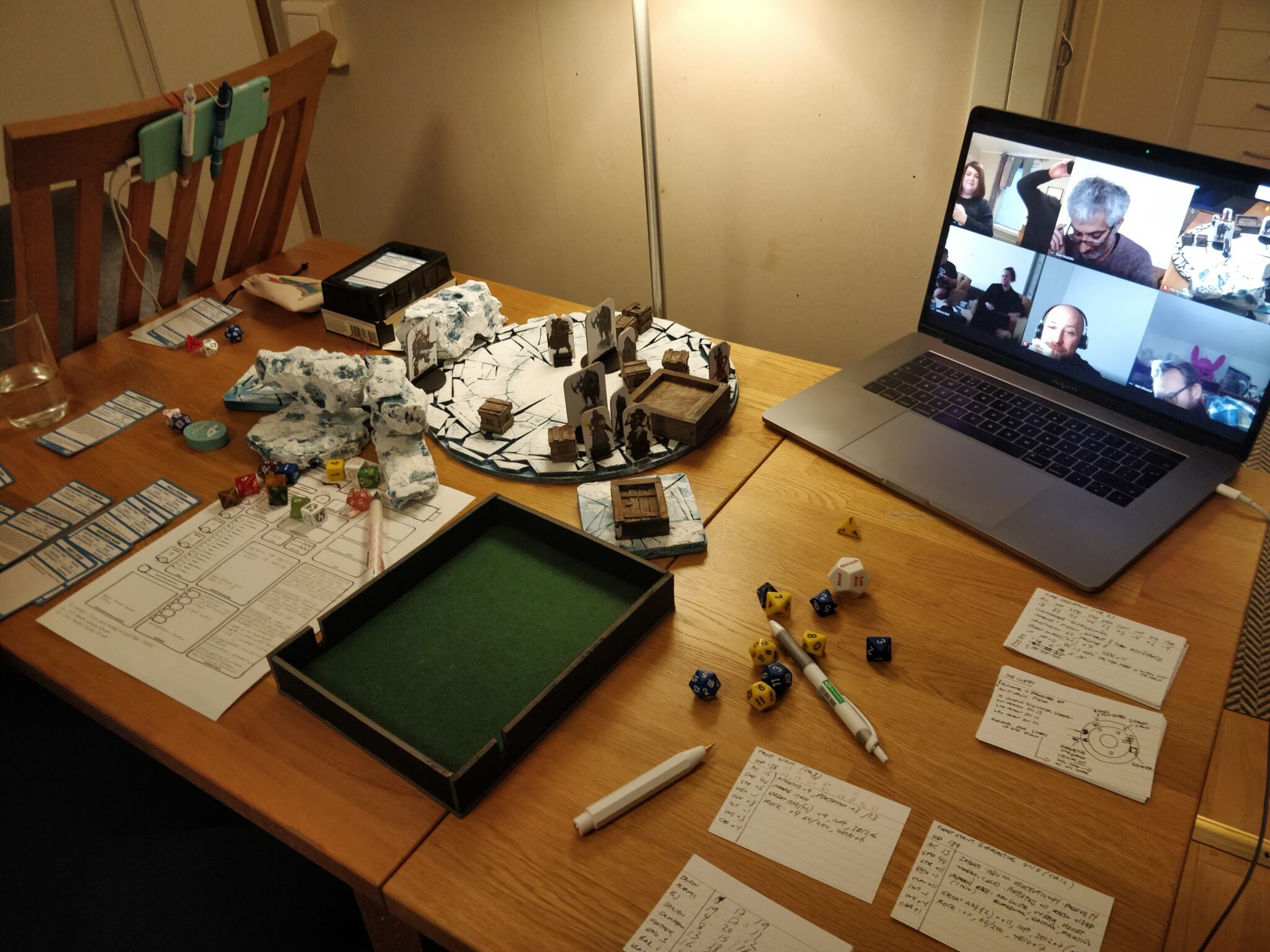 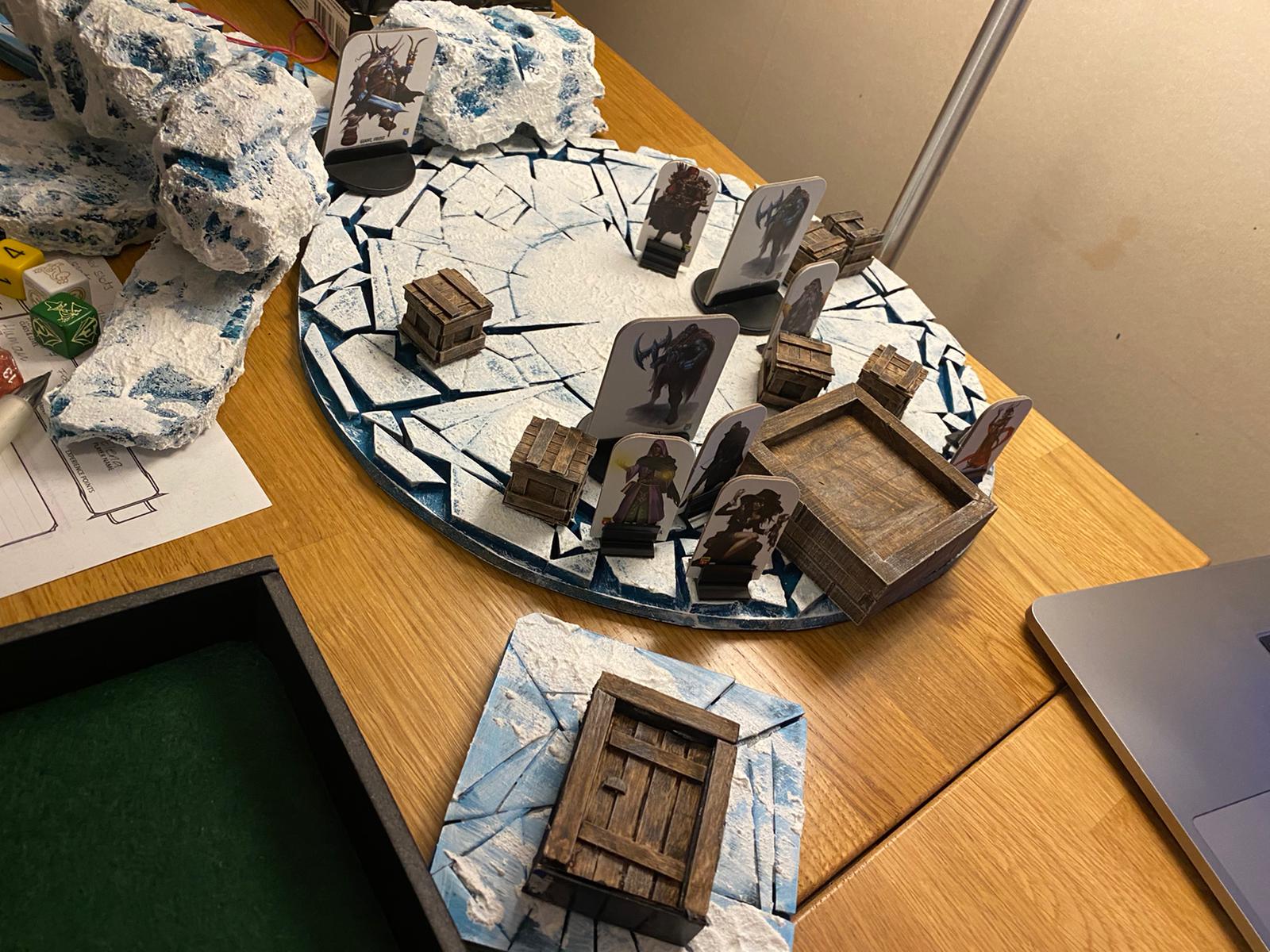 Not waiting for the Everlasting One to return with mates, the party quickly took the elevator up and confidently persuaded the Frost Giant workers at the upper level that they were on a mission to see the King. Having no reason to doubt the heroes, the Frost Giants went on with the jobs.

The Upper Level was where the Town of the Frost Giants were located and the heroes quickly found their way to the tavern “The Roc and the Icicle” run by the friendly innkeeper Bestla Beermaiden, who took to the flirtatious Paladin, Damon, and told the party of the blocked main road to the King’s Castle. Apparently Frost Giants had disappeared going in so the King had had to close the road until the danger had been dealt with. Now travellers to the castle would have to go up the side of the mountain using a more treacherous path.

Up the side of the mountain

The next day, well rested and ready, the party decided to take the smaller path up to make a deal with the King.

The experienced heroes quickly realised the risk of the icy footing and tied themselves to get with a rope scaling the steep path in single file.

But the icy footing was not the only danger traveling up the side of the mountain. The party was suddenly attacked by a White Dragon.

Damon the Paladin, realised the White Dragon was not alone and Commanded the Dragon to guard the party, while he quickly dragged the entire line of heroes up after him.

Confused, the dragon obeyed and turned to attack its own allies, while the party escaped and found themselves at the landing in front of the Castle itself. 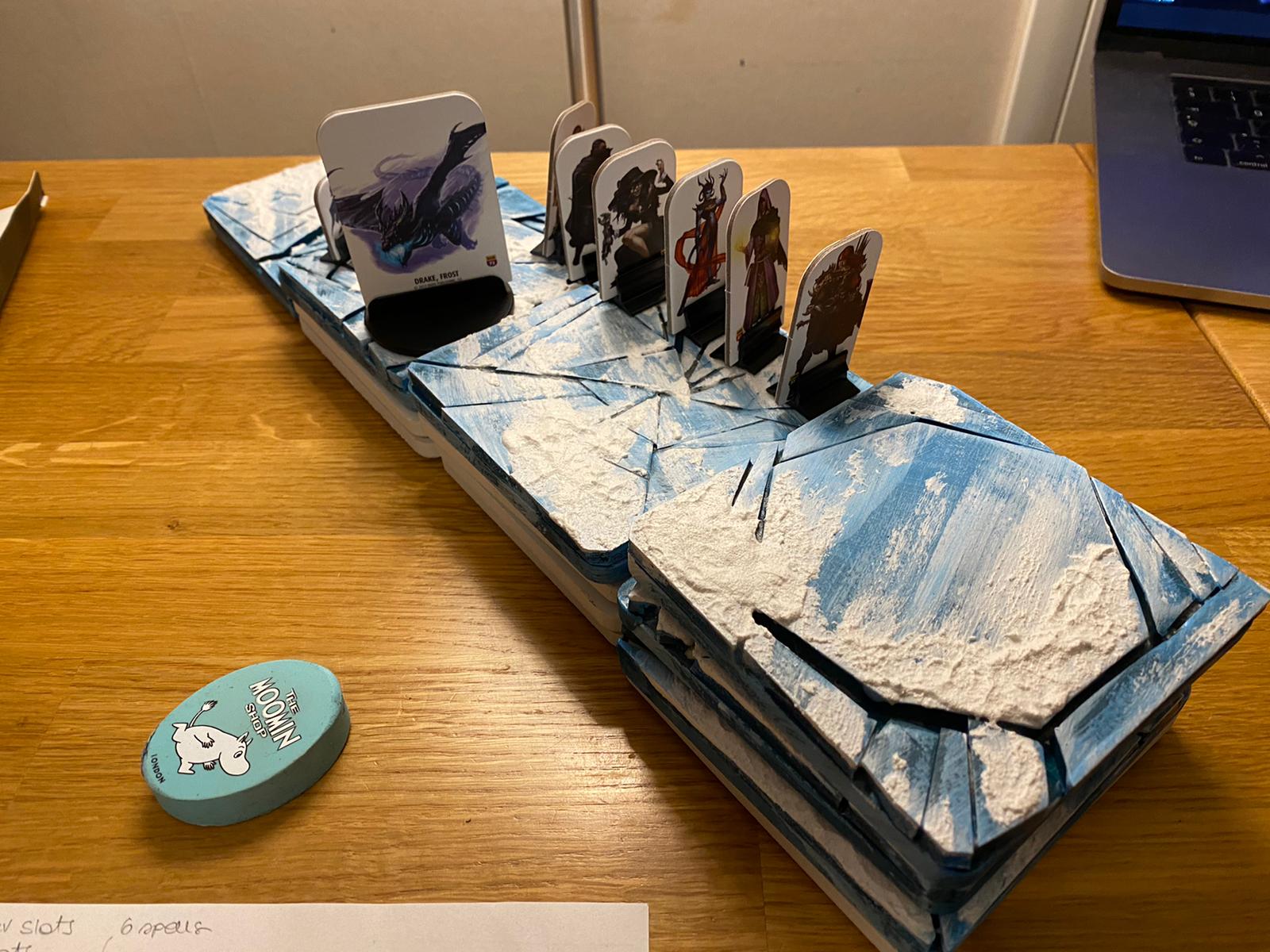 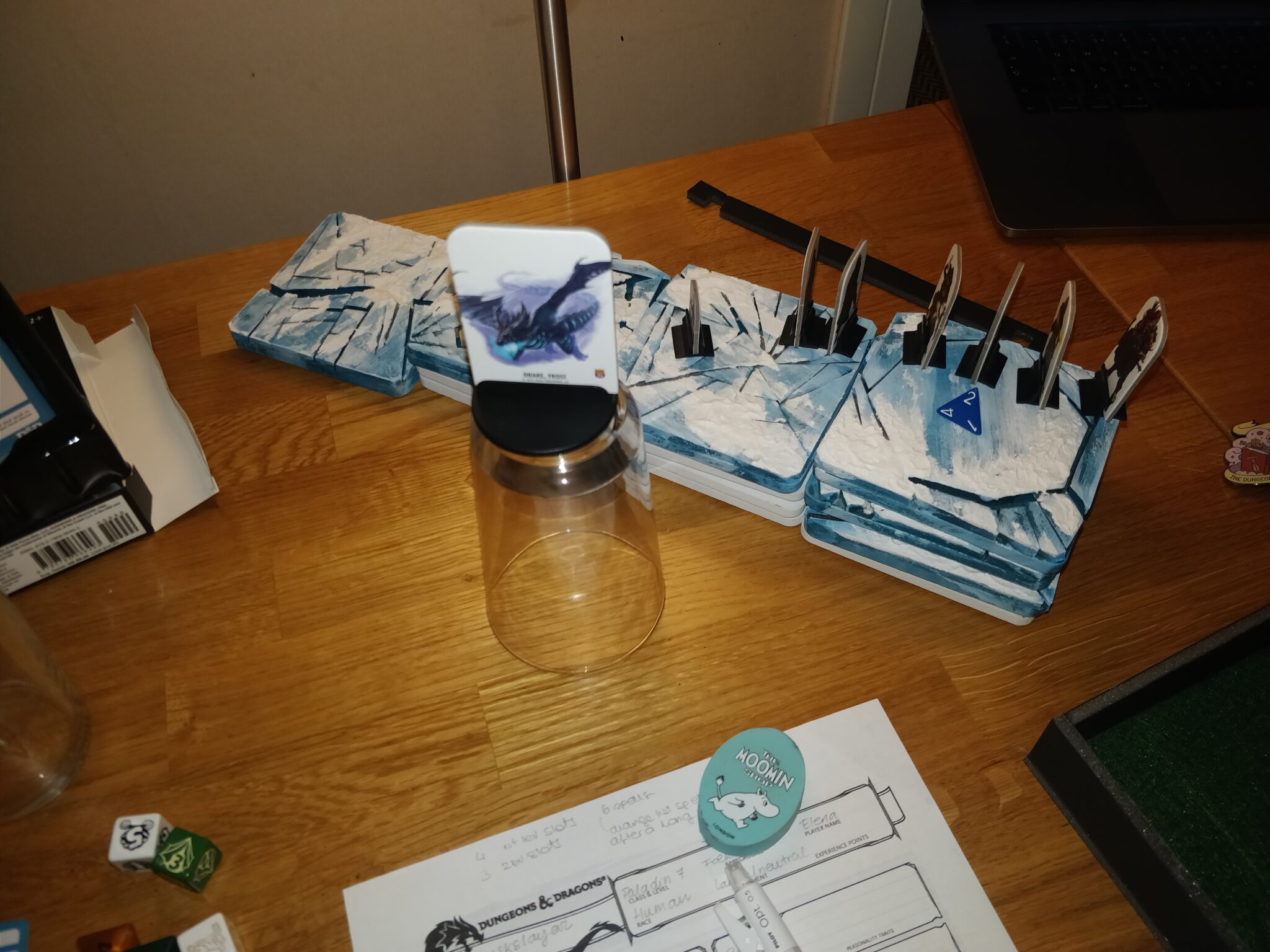 The Mountain King’s castle was an entire, and utterly impenetrable, castle carved into the side of the mountain.

While the party attempted to trick their way in, the Castle Guards were top quality guards impervious to threats, charms and persuasion.

Being used to being able to intimidate or charm their way through obstacles, the party was left bewildered and decided to set up camp in the front of the Castle.

The puzzled Guards came over to shoo the party away, but with some quick back and forth, the party learned they might be able to reach an audience with the King if they cleared whatever danger was hiding on the main road.

The Danger of the Main Road

The party crossed the barrier and set up camp on the main road, but their rest was disturbed by the ground shaking with the approach of something large, larger than the Frost Giants.

Alyanys the Warlock made herself invisible and raced ahead to scout and found a large clearing with a constructed pillar in the centre.

While the shaking and growling was approaching fast, Alyanys spotted some magical markings on the pillar and while she couldn’t identify what they did, it definitely had to do with some lightning magic.

Whatever was coming was right around the corner and Alyanys hid behind the pillar confident in her invisibility spell, but it wasn’t enough to trick the gigantic Frost Hydra that came crashing into view and quickly caught the scent of the Sorcerer and furiously attacked the half elf.

Meanwhile the rest of the part came running to Alyanys’ aid, both with brute force assaults and tricks such as B.J’s poisonous apple and Damon jumping on the back of the Hydra. At the end, it was Alyanys’ Fire Shield that killed the Frost Hydra despite of it being resistant to fire. 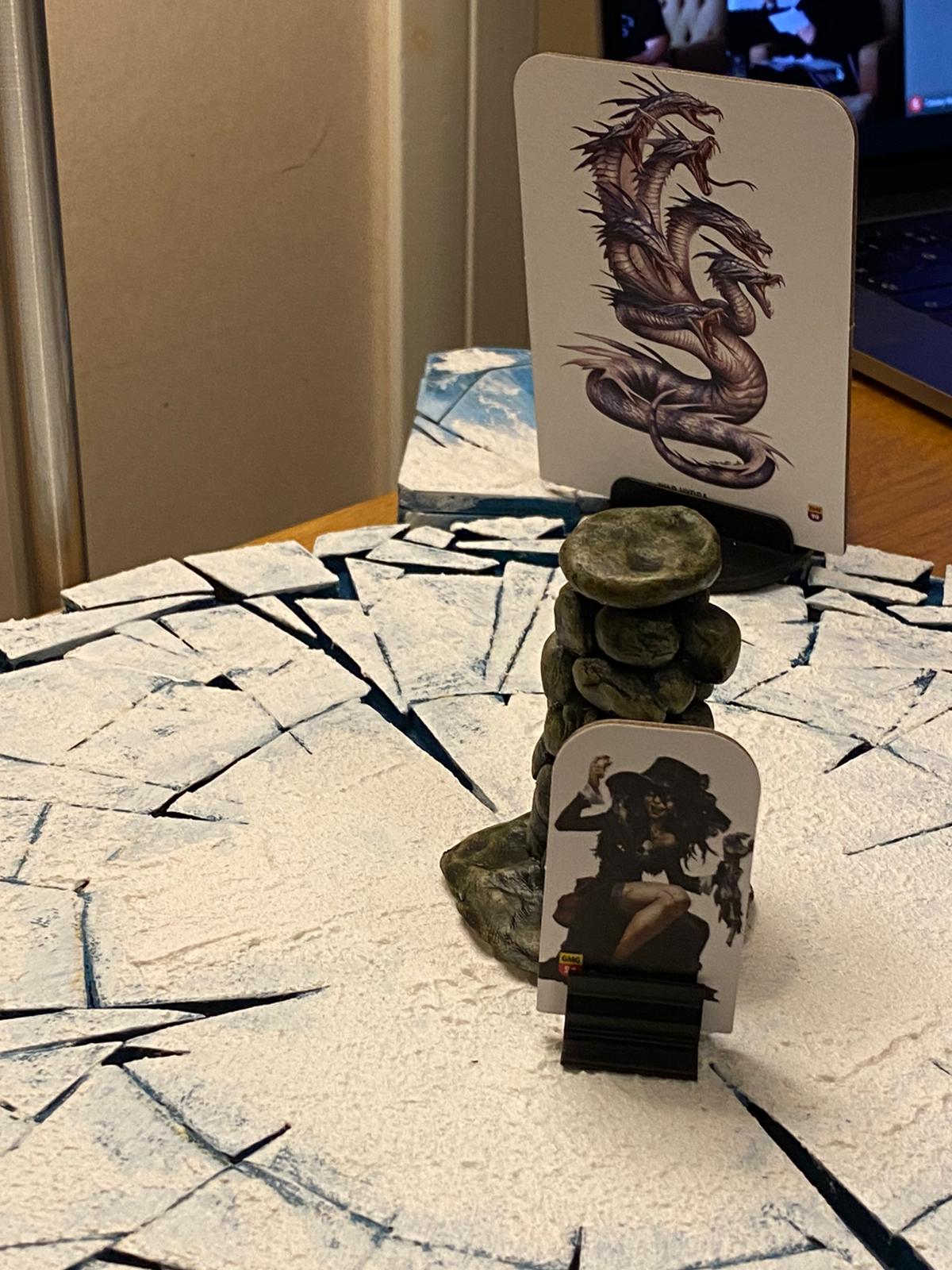 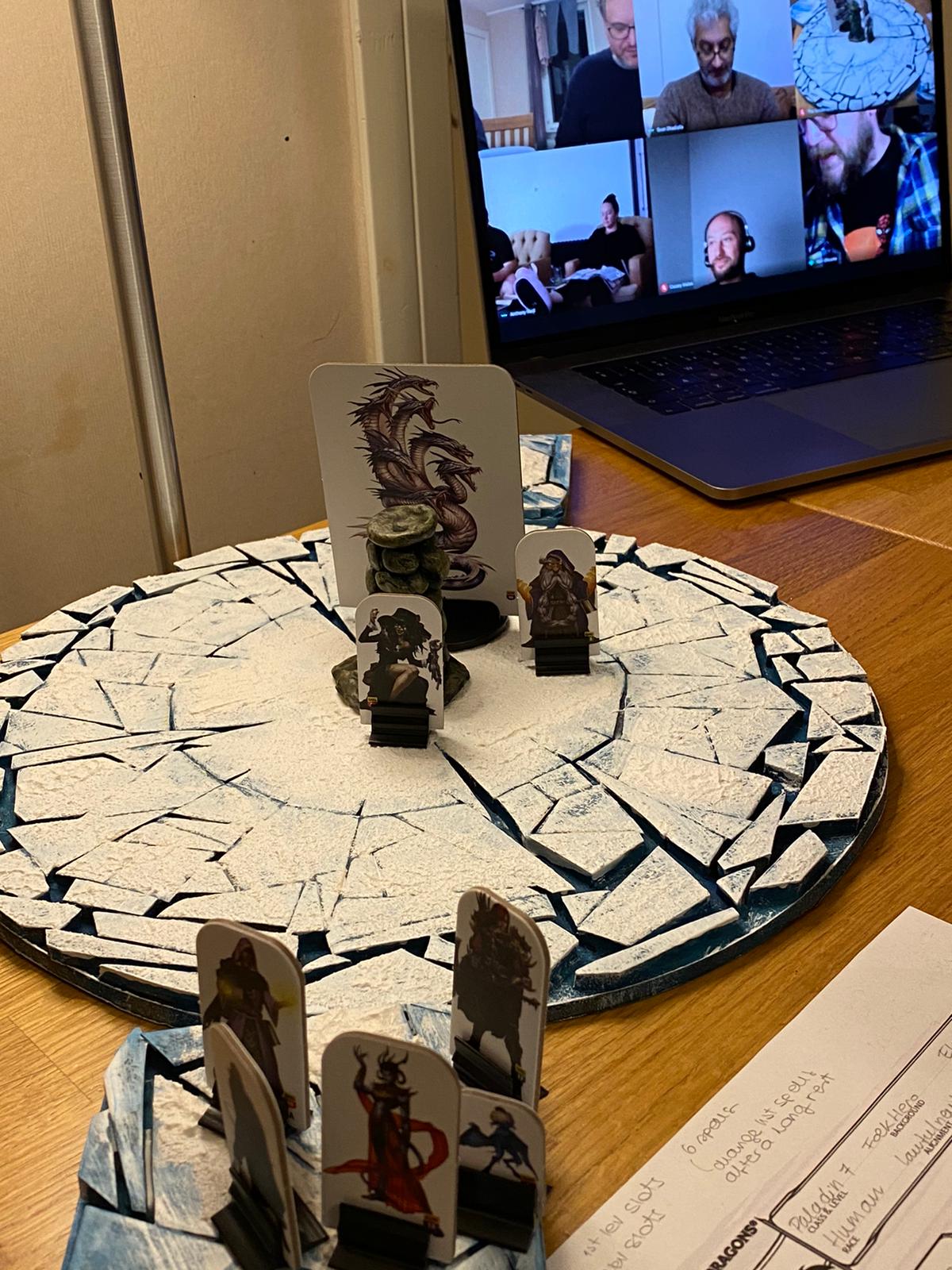 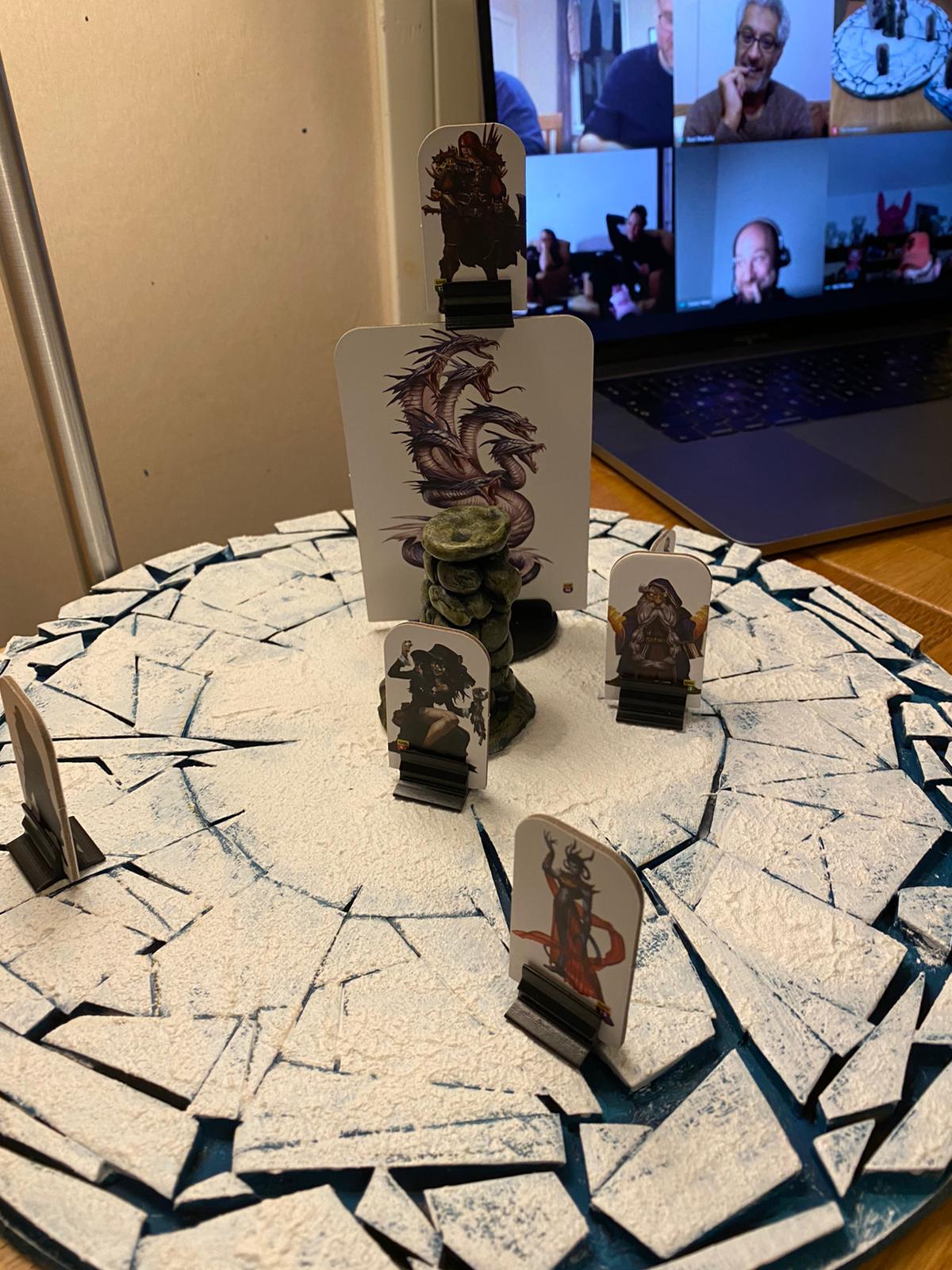 The party dragged heads of the Hydra back to the castle gaining instant access to the King’s Hall.

But the King was not what they expected as the King was no other than Somniumanax the Vibrant, the very Dream Dragon, our Paladin Damon was quested to slay! 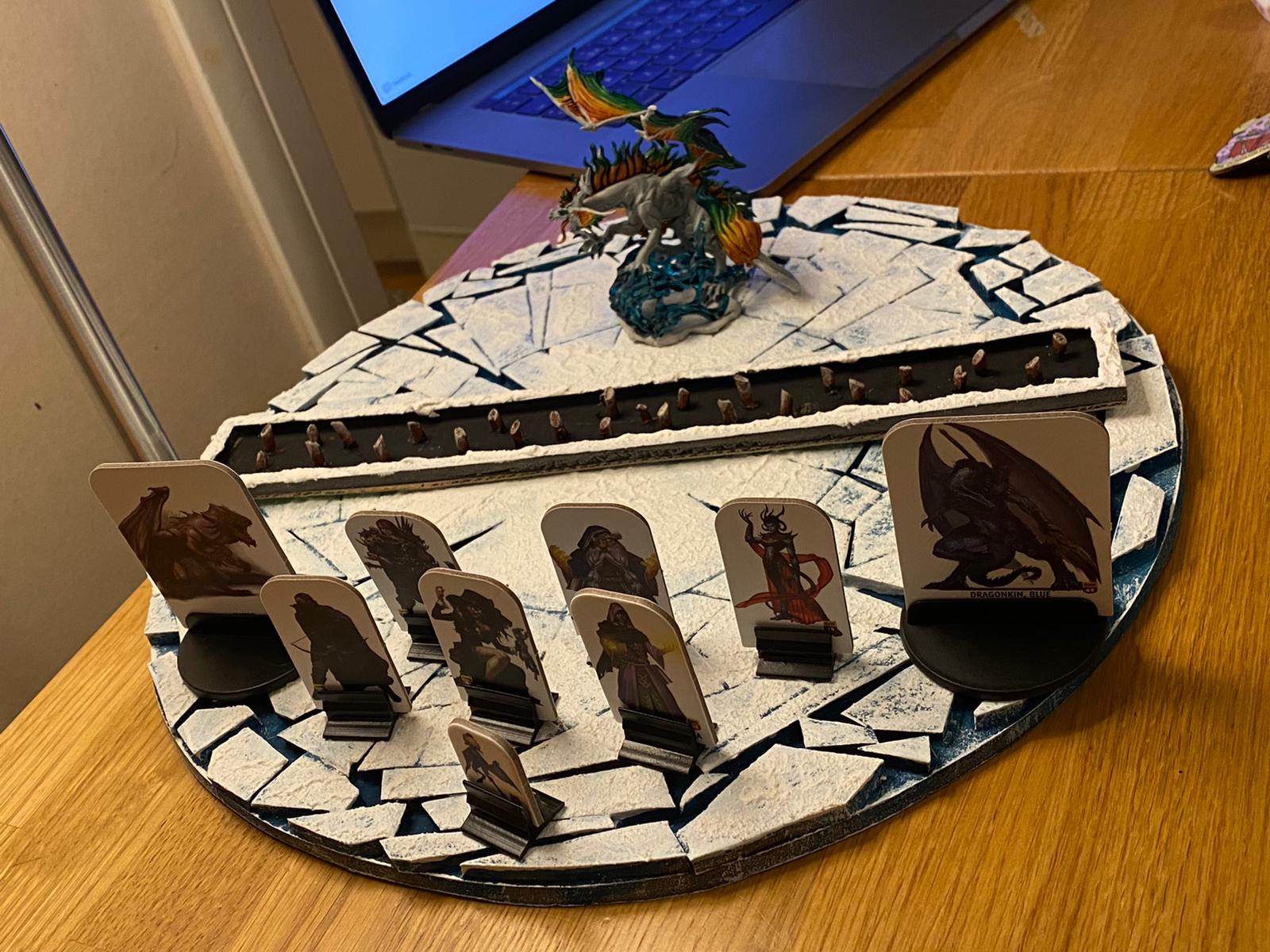