While the Mountain King turned out to be Somiumanax, the Dream Dragon,Damon the Paladin had vowed to slay, the party decided on discretion in order to secure the Mountain King’s support in slaying the Winter Queen. 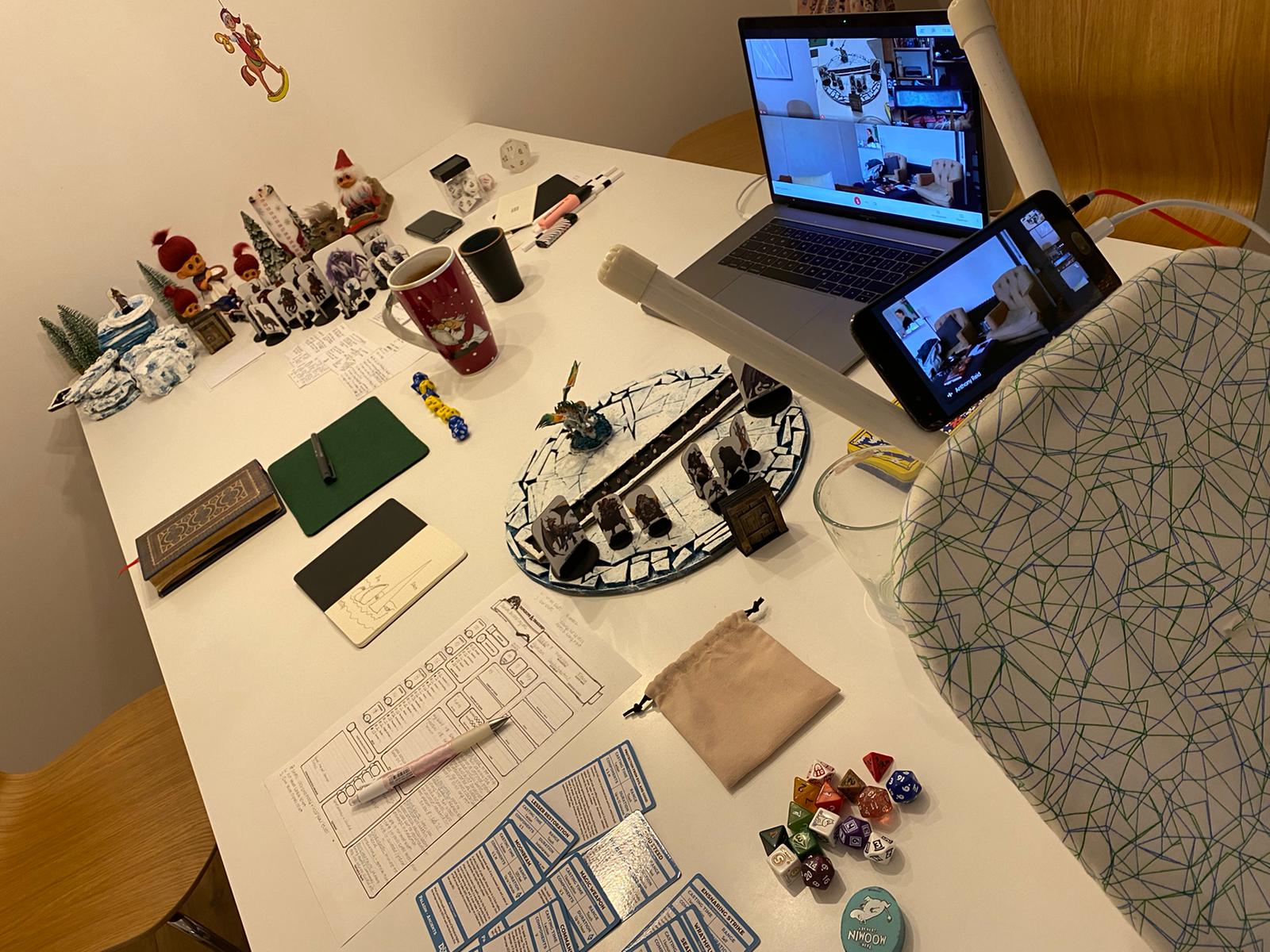 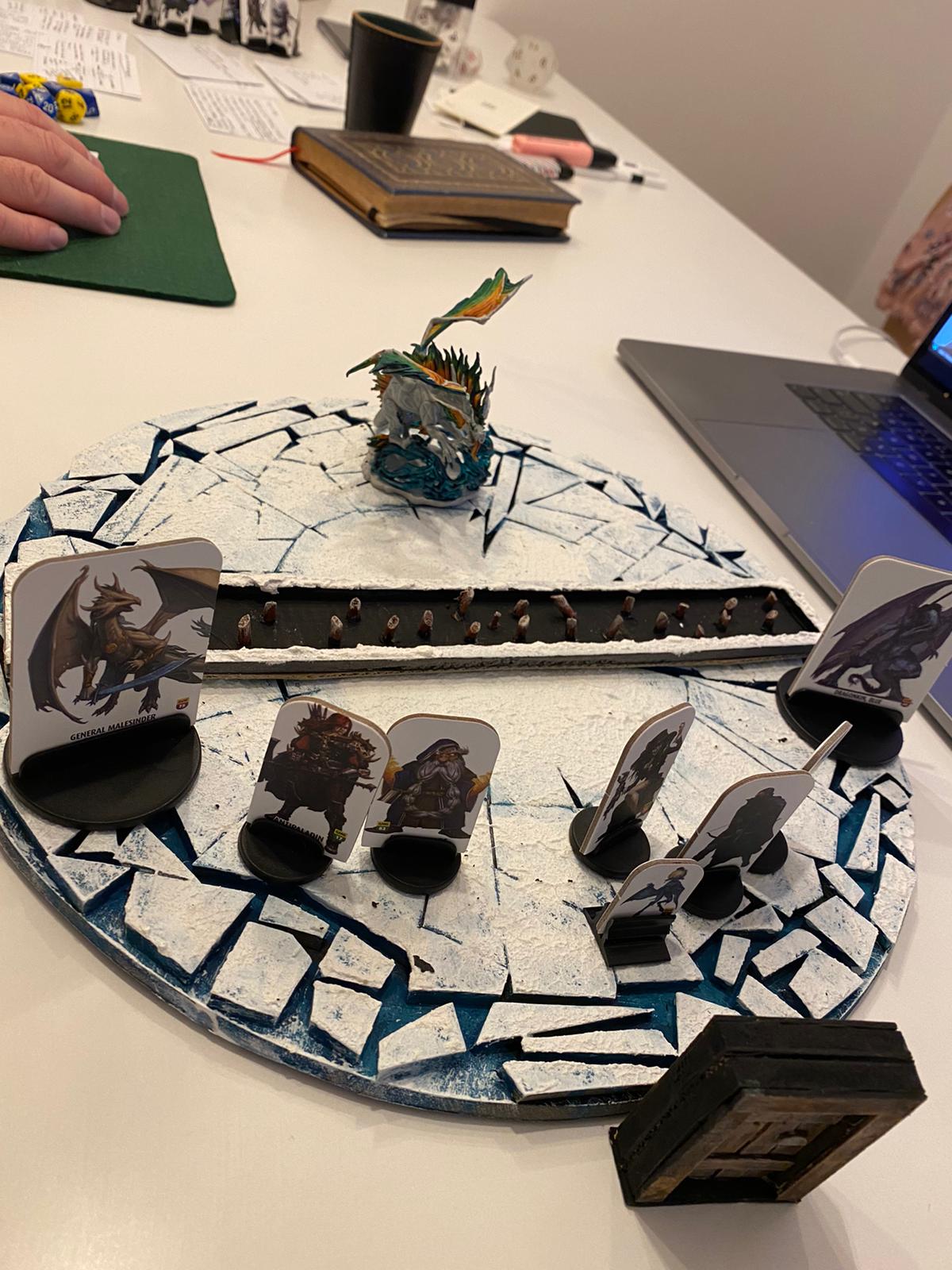 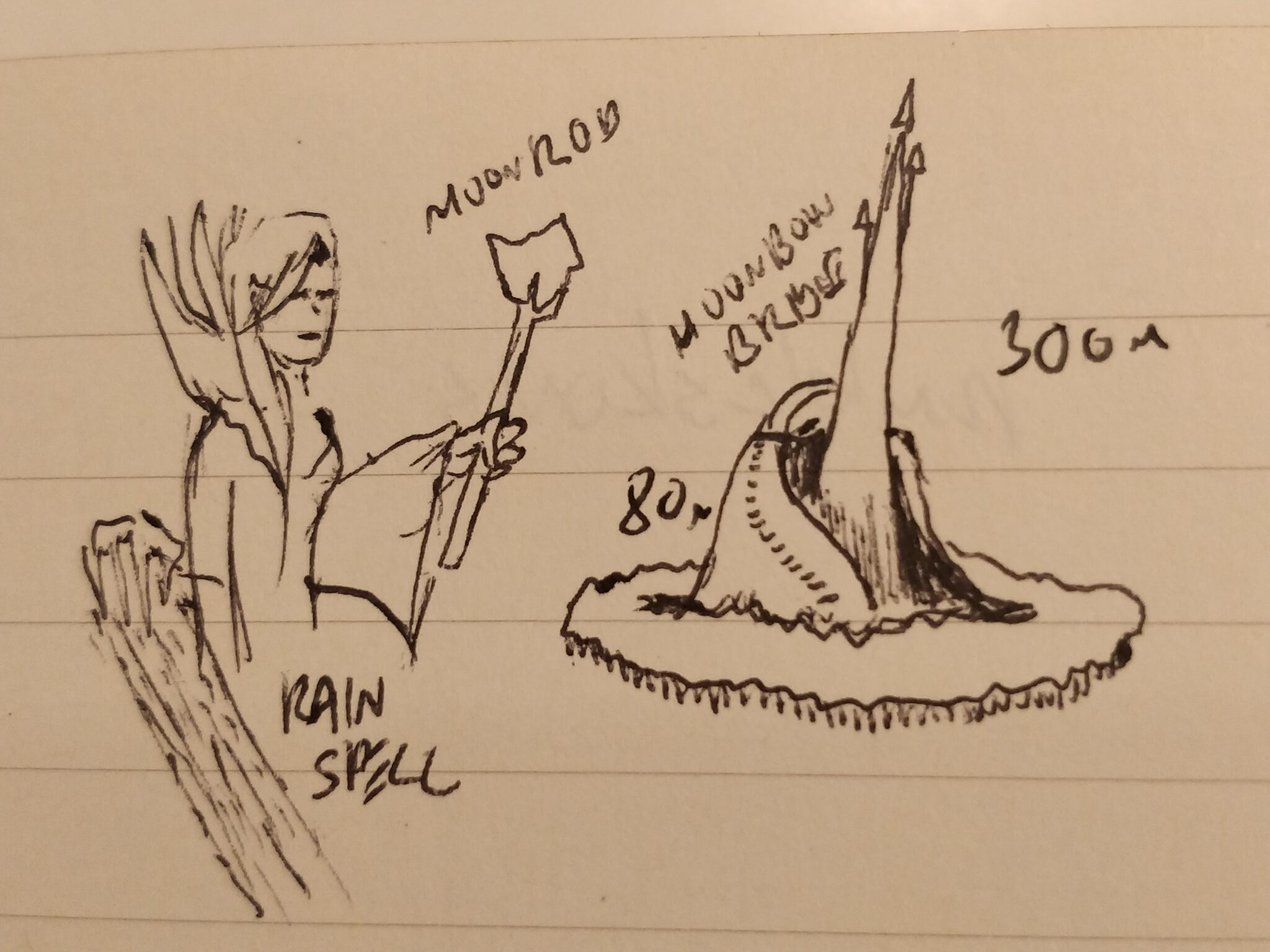 This task fell on the party and they ventured to odd construct that was The Crystal Shard, a smooth 300m tall and slim icy magical construct, with an 80m neighbouring staircase ending abruptly where a bridge should have been leading the the Crystal Shard itself.

The party investigated the two structures, but unable to make any sense of how to get from the tall staircase to the Crystal Shard.

The investigation was interrupted by the approach of the Winter Queen and her army. Hidden from sight, the party saw how the Queen magically created rain between the two structures. She then raises a rod with a stone shining a beam of moonlight into the rain creating a Moonbow across the chasm that her army could safely cross to enter the Crystal Shard.

The party, mesmerised by the spectacle, now knew what they had to create, but no idea how.

By chance, they stumbled upon two small fey creatures on a date and learned that they loved looking at the Winter Queen’s Moonbow as it was the only moonlight to be seen these days as the River Troll from Everfrost Lake had lured the Moon itself down to the ground and captured it!

As a final warning, the Fey couple told the Party to avoid The Rainman as he was to be considered dangerous.

The River Troll and The Moon

The party made their way to Everfrost Lake where they spotted a faint moon glow at the bottom of the lake.

B.J, the Sorcerer and Damon the Paladin, used various spells and prayers to generate fire and heat to burn through the ice and noticed this was drawing the attraction of the shadow circling the glow.

Once a decent sized hole had been cut, Grimshaw the Barbarian prepared to dive down protected from the icy waters by his Ring of Warmth. Alyanys the Warlock conjured a Sea Horse familiar, but the unpredictable nature of the Feywild resulted in the Sea Horse emerging so large that Grimshaw could ride it into the waters.

Meanwhile, B.J. created a Wall of Fire to draw the attention of the creature and Grimshaw was able to swim (ride?!) down to the Moon, which he found sad and chained.

He quickly freed the Moon who, happy to be free, started to grow in size as she rose up through the water and at the time she crashed through the ice, she was more than a 100m in diameter, which drew back the attention of the River Troll, but it was too late. The Moon rapidly rose into the sky where she belonged.

The Troll, furious, swam after Grimshaw, who desperately tried to get to the surface to draw air into his now burning lungs.

DM notes, I used a skill challenge to play out this little chase scene.

Grimshaw made it safely up and the party ran to the edge of the forest before the Troll emerged. Furious and confused, the Troll gave up on the chase and instead pulled out a crossbow and took aim at the Moon. However, the party attacked the Troll preventing him from capturing the Moon and eventually killed him for good.

A heated discussion at the inn

The party returned to The Roc and the Icicle, the Frost Giants’ inn, to recover their strength and regroup.

In the morning, they asked the Frost Giants for advice on The Rainman as they knew they needed rain combined with now freed Moon.

While all the Frost Giants had lots of “great” advice, nobody actually had any first hand experience with the Rain Man.

An old Frost Giant sitting shivering by the fireplace spoke up, much to the annoyance of the other Frost Giants. He would not silenced and told the party of the home of the Ice Gnome brothers who had in their possession a rope made of Fairy hair, which could capture anything… including a rain cloud.

The debate between the older Frost Giant and his younger kind got heated and fearing to be trampled by the arguing Giants, the party left.

DM notes: By now my players are savvy and experienced D&D players. And their 9th level characters are powerful, so I wanted to create a unique encounter that merged Combat, Puzzle and Traps into a single difficult encounter.

The party entered the lair of the Ice Gnome Brothers and easily found the Fairy Hair Rope, but as they removed it, a huge Ice Golem emerged from the wall and they fled back to the entrance only to see it collapse. 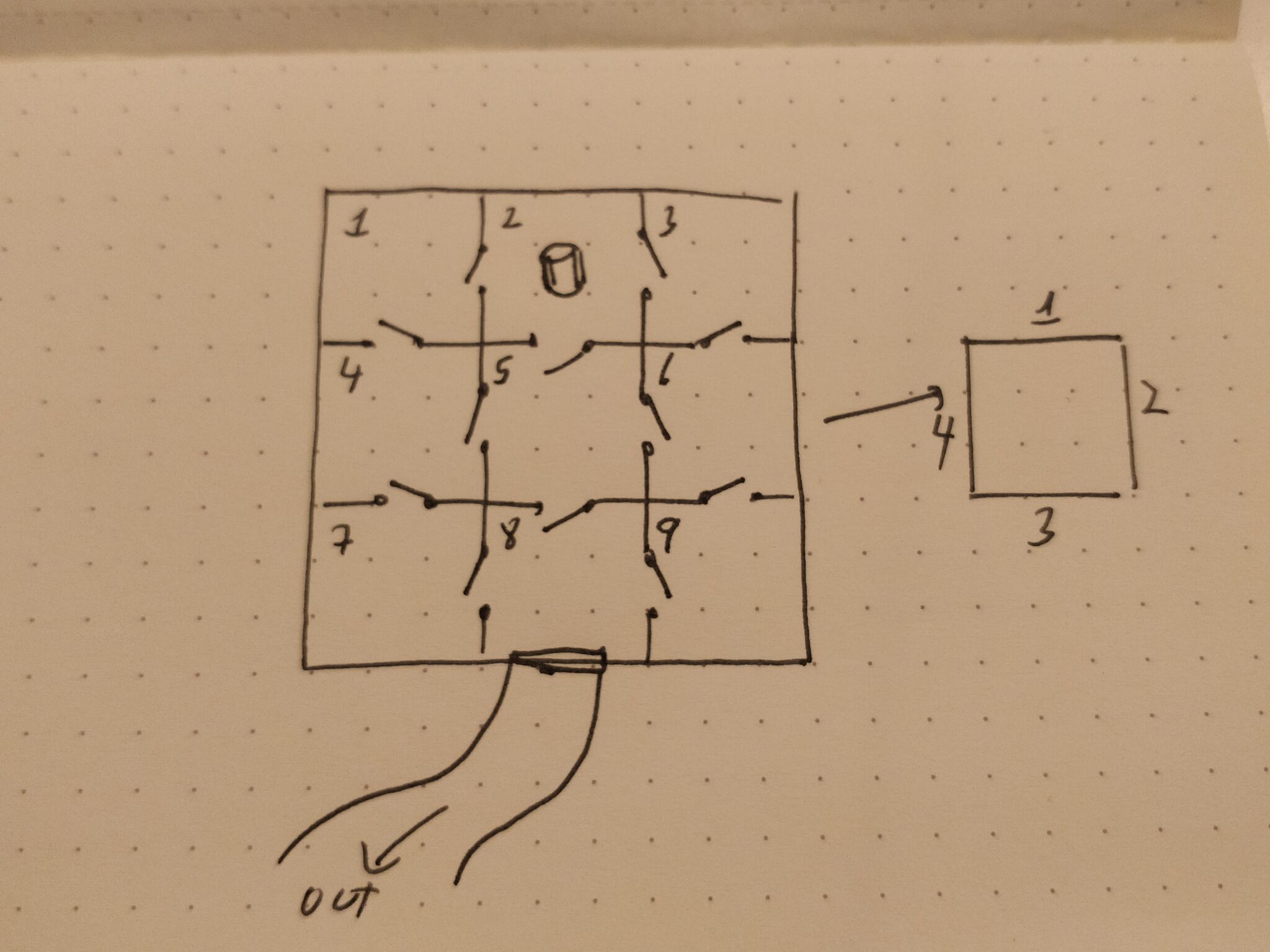 The Golem quickly reached the party and a deadly fight broke out. Severely injured, Alyanys fled to an adjacent room only to face a confused Ice Gnome who quickly fled to another room

Ultimately the Ice Golem was defeated exploding causing ice shards to fly in all direction injuring all heroes.

The rest of the party ran after Alyanys and the Gnome.

DM Notes: While at least one of the two Ice Gnome brothers is undetected, he will be able to “reboot” the Ice Golem. Furthermore, once at a regular interval I rolled for a random room to have a random door collapse. I did not expect this to be as impactful as it was, but I had some really disruptive rolls. 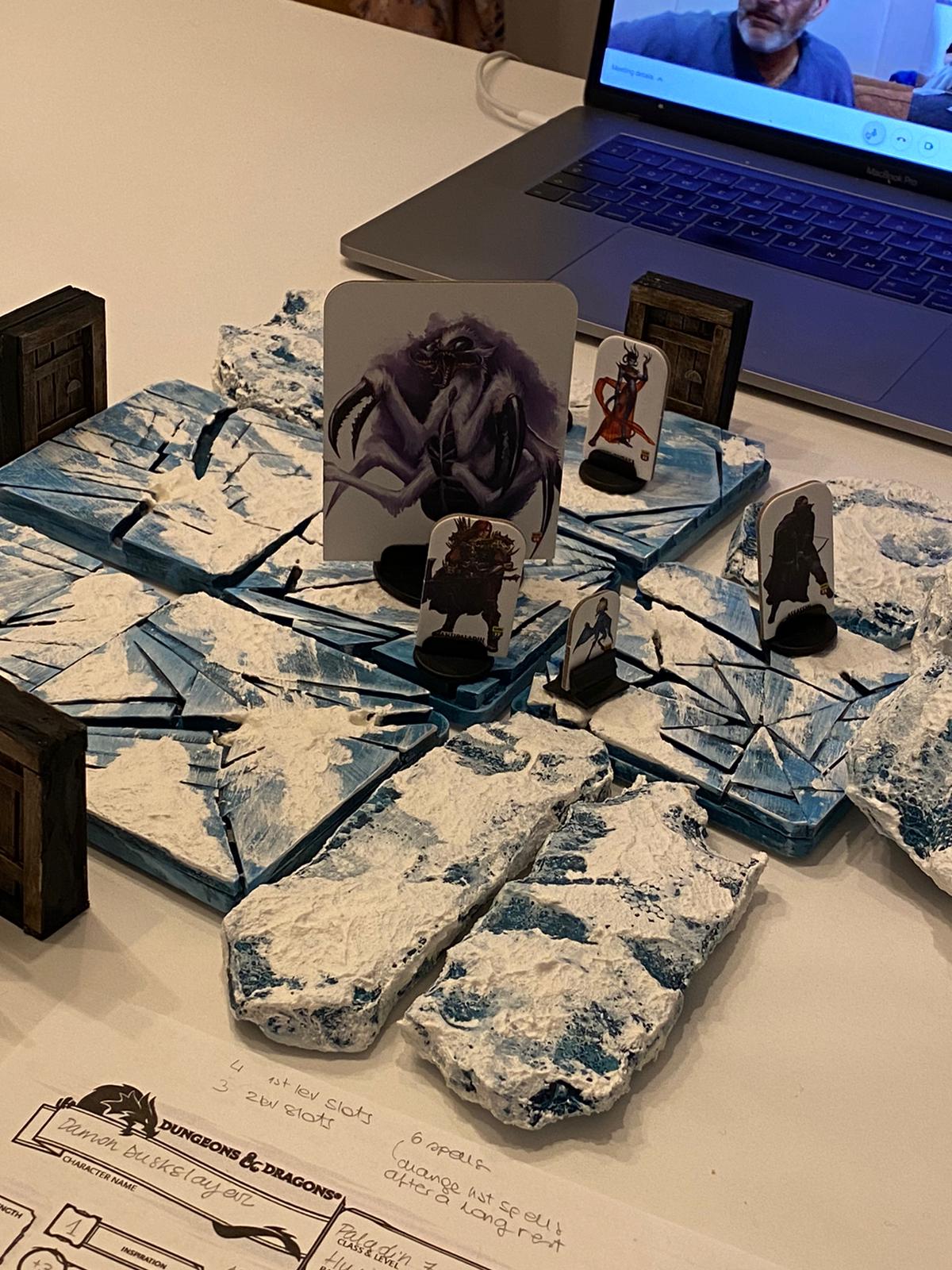 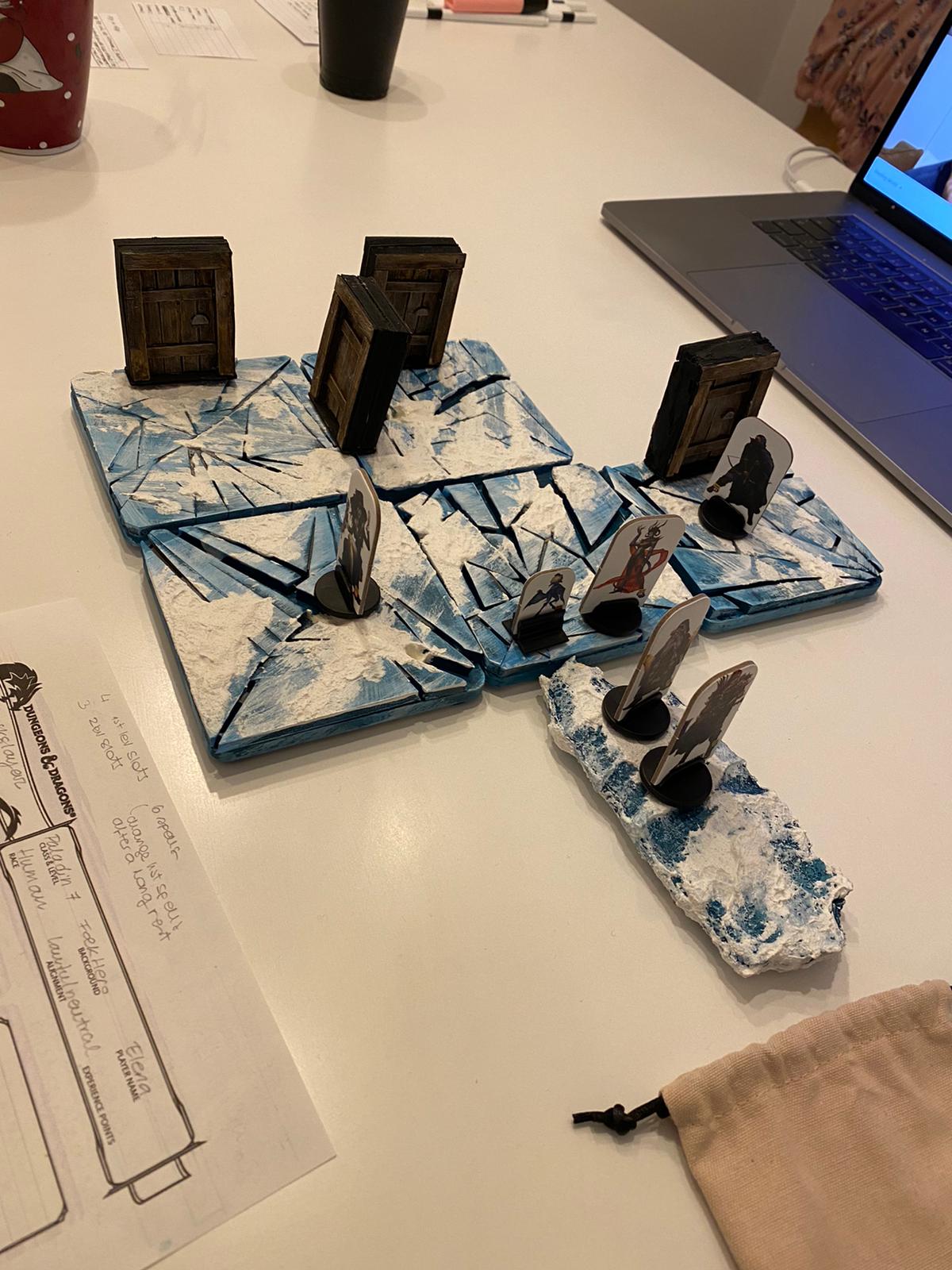 I didn’t have a Golem figure at hand, so this strange giant insect was used.

Suddenly the party heard and felt movement from the room of the slain Ice Golem and their hearts sunk as they realised the Golem was back on its feet.

Once again the party emerged victorious, but feeling a lot less confident about the situation. Some party members went off to hunt the Gnome while others kept hitting the shattered Golem to avoid it from regenerating.

Meanwhile the Gnome was caught but unable to speak its language, it was of little use.

The second Gnome was spotted by chance and was chased down, but multiple attempts to grapple it failed.

Meanwhile the Ice Golem was activated again and now only faced with Grimshaw the Barbarian and Bareien the Drow Ranger. Eventually Barrien was rendered unconscious.

Grimshaw, hoisted the Drow on his shoulders to run for aid but reached his fellow adventurers in the middle of a chaotic chase to catch the second Golem.

Eventually the second Golem was caught and the control mechanism for the Golem was found.

Barrien, having been healed, took a breather away from the chaos and figured out how to use the controller to reassemble the Golem and use it to dig the exit free.

And with that, the partyy walked out to catch a rain cloud with an Ice Golem in tow!

DM Notes: This encounter was almost 90 minutes! Crazy! I think the combination of Gnomes running around like slippery rats combined with the doors collapsing led to a very mobile and interesting encounter where the party wasn’t always in control of where they were.

I think some of the players half-way gave up a couple of times, but never all of them at the same time, which was lucky. Phew!

I really enjoyed running this complex encounter, but there are lots I can improve on:

And with that it is the end of 2020 for the Nightshift. Look forward to continuing their adventures in Daisygate in 2021. 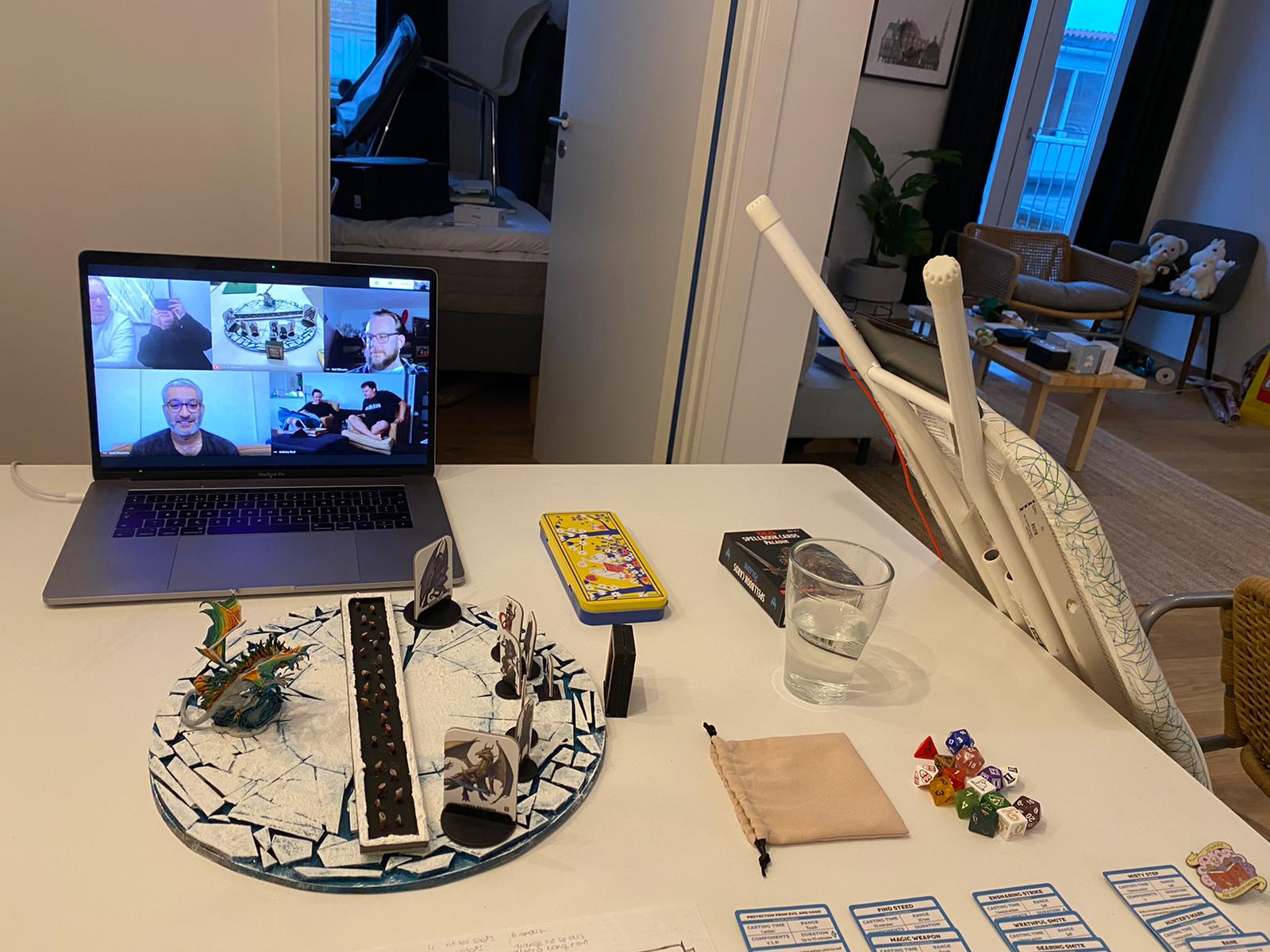