This is the first time since we left London in July last year that we play with miniatures. Photos by my lovely wife.

The party, having had to come to terms with the fact they are 300 years in the future (and have lost their patron given powers), had decided to follow a rumour about children disappearing South of Daisygate.

However, on the way out of the Southern gate, the party heard screams and a growl. Listening closer, Grimshaw The Dwarven Barbarian, recognised the growl as the growl of his Totem Spirit Bear, but mixed with the insane laughter of something otherworldly.

Without hesitating, Grimshaw ran to reclaim his lost Rage from his totem, the rest of party having no choice but to follow his fast, little legs.

Turning the corner they saw the tail-end of the Great Spirit Bear seemingly chasing what it thought to be a worthy foe.

However, following the Great Bear, the party to their surprise, found a Devil in the middle of a square with bodies and screaming citizens running around in fear of the horned creature looking for exits, which the Devil had closed off with fire to his own amusement. 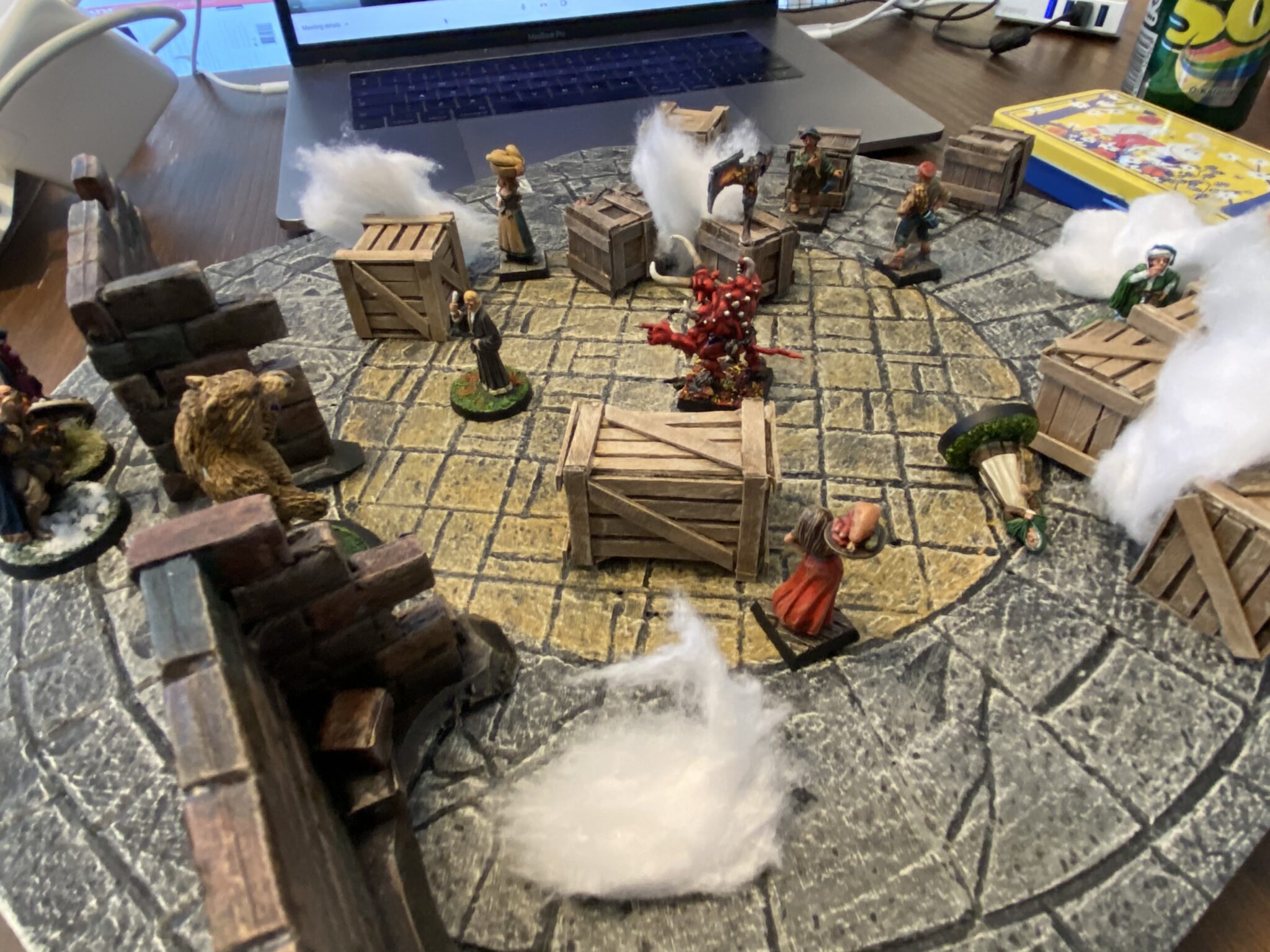 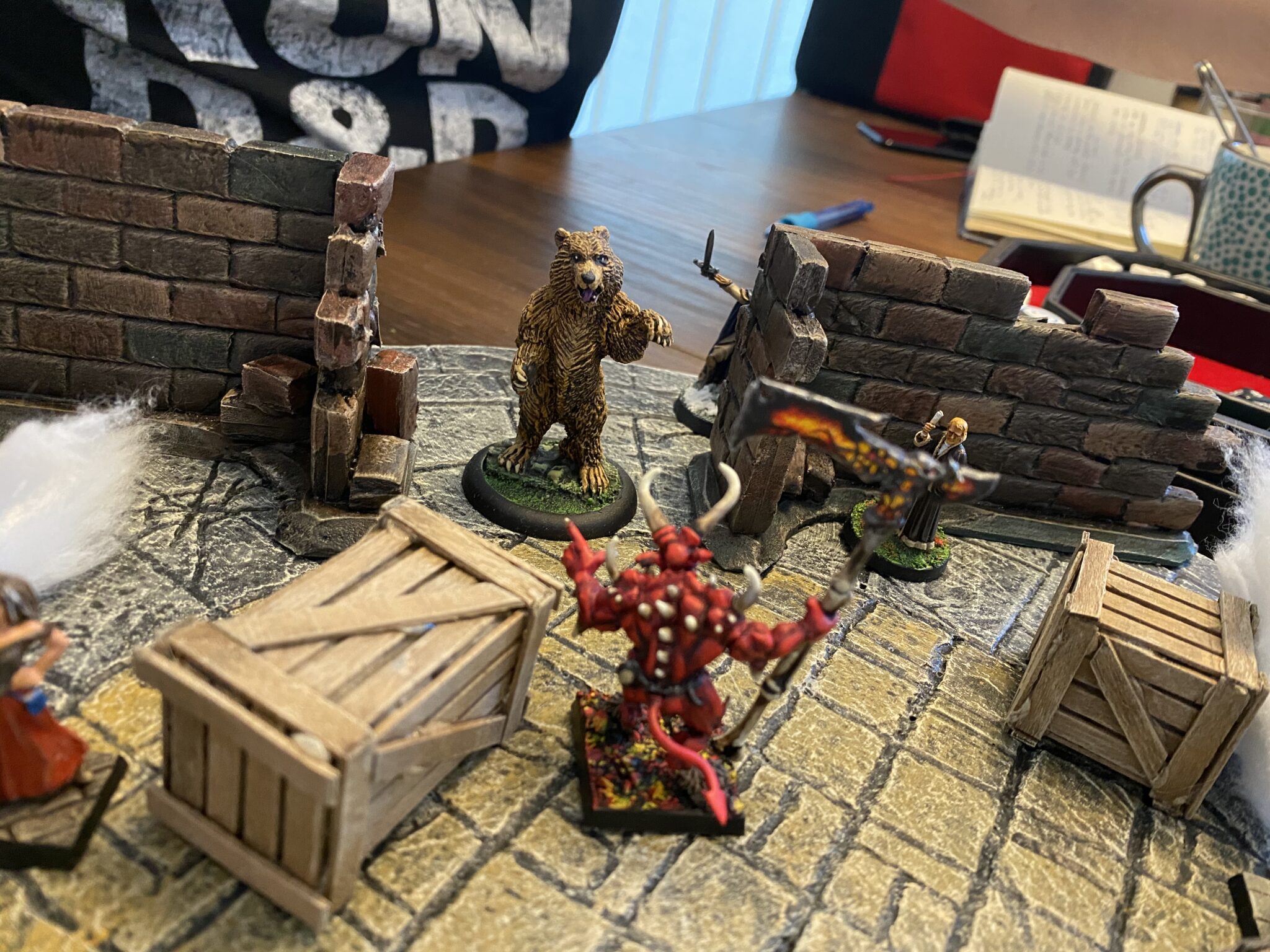 The Great Spirit Bear saw no real challenge in the Devil and disappeared uninterested, but Grimshaw leapt into action only to face the Devil’s handsome smouldering looks. The Dwarf stopped in his tracks instantly in love! 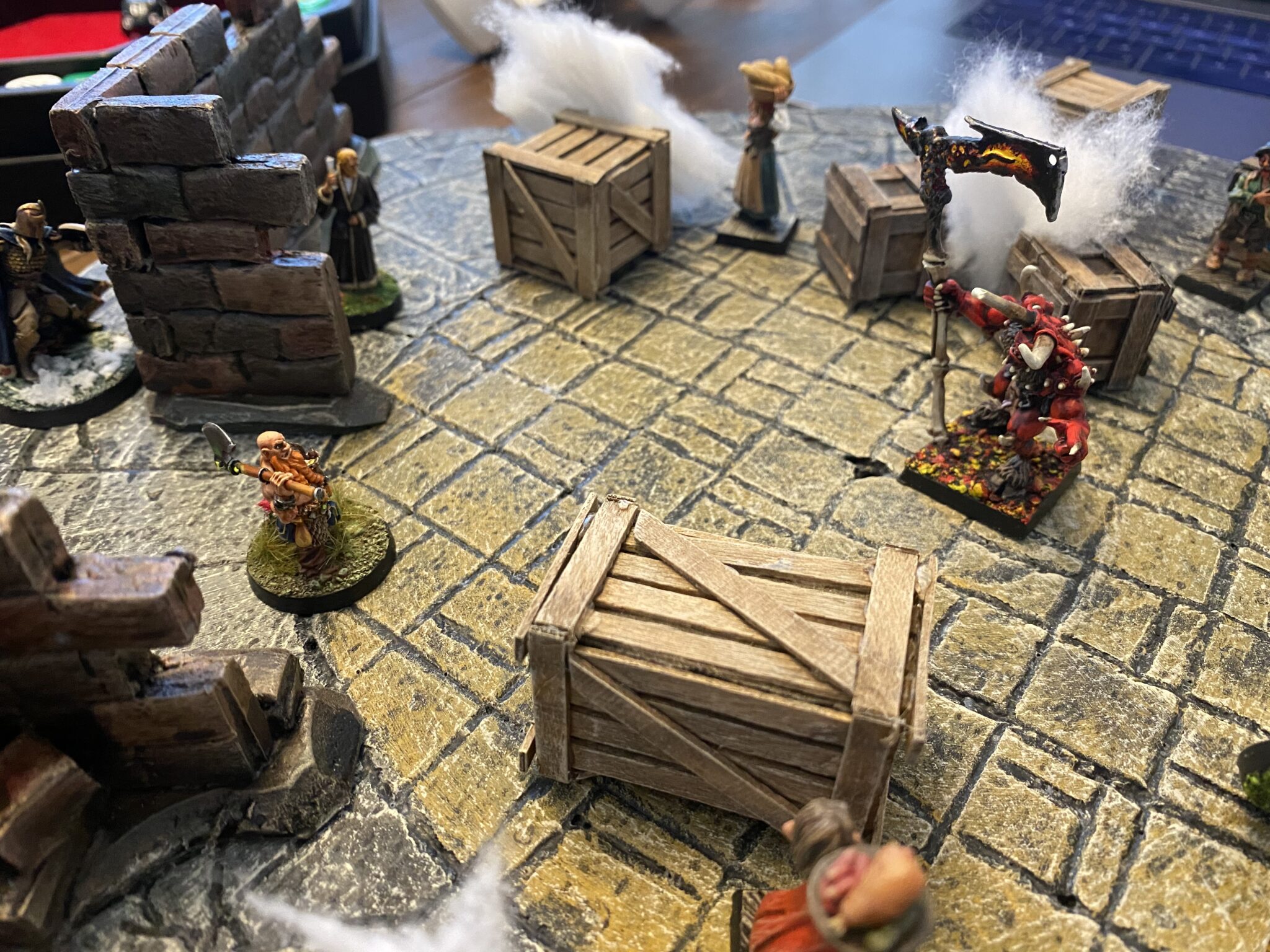 Damon the Paladin saw this and cast a protective spell on himself and Alyanys the Half-Elven Warlock, who in turn recognised the Devil as being from Avernus, the Realm of her Patron: Xinphalaxal, the Pit Fiend.

Alyanys tried to reason with the Handsome Devil, but he just used the conversation to escape after having dealt some serious blows to the love blind Barbarian.

As he ran for the farther exit, the citizen instantly fell in love with him and tried to grab the heroes to slow them down in jealousy.

But the experienced heroes merely shrugged them off, save Grimshaw who had a peasant jumping on his neck… he simply ignored the man and kept running with the peasant unwillingly riding the shoulders of the dwarf. 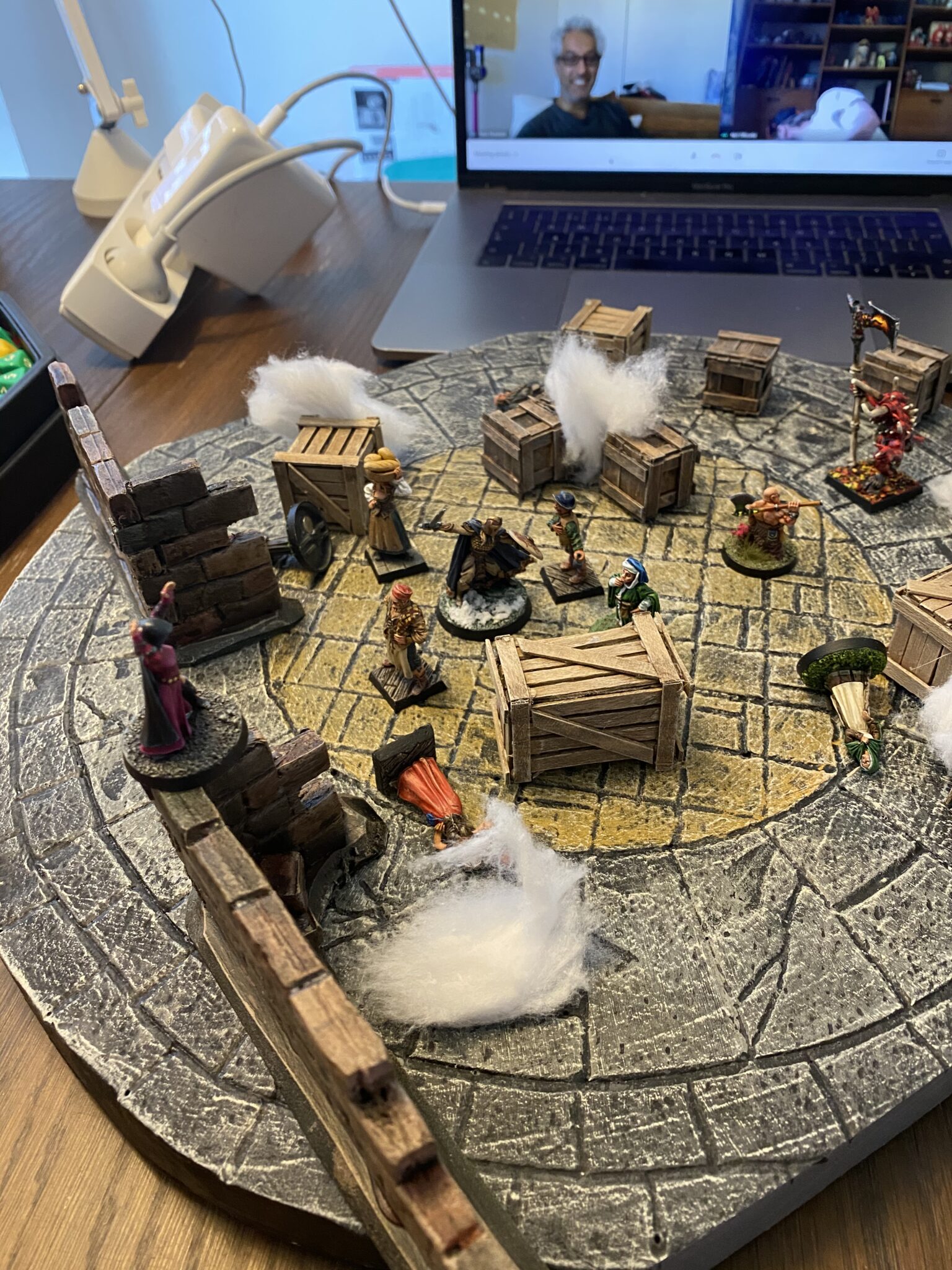 An encounter in a tavern

The party traced the Devil to a tavern filled with guests. While the guests didn’t immediately seem to be enthralled to the Devil, the party chose to approach the situation more delicately and Alyanys again tried to reason with the Devil, this time with much better success.

DM Note, the tavern was actually meant to be a combat encounter, but the players’ strategy to the situation was far more realistic given the risk of all the guests being in love too.

The Devil explained he had been summoned by an accident by a group of cultists trying to summon something else, but in feeding their portal with energy through Witch Bolts, they had overloaded and accidentally opened a gate to Avernus through which the Devil came through.

Alyanys promised to bring Xinphalaxal through the portal if the mistake could be replicated and the Devil readily told the party where and when to find the cultists.

The same evening the party went to the docks and easily found the cultists hideout: Warehouse 15.

Inside they found 4 cultists in trance summoning energy to fire their Witch Bolts on the stone frame that made up the would be portal. As the heroes stepped in, the first cultist began his Witch Bolt. 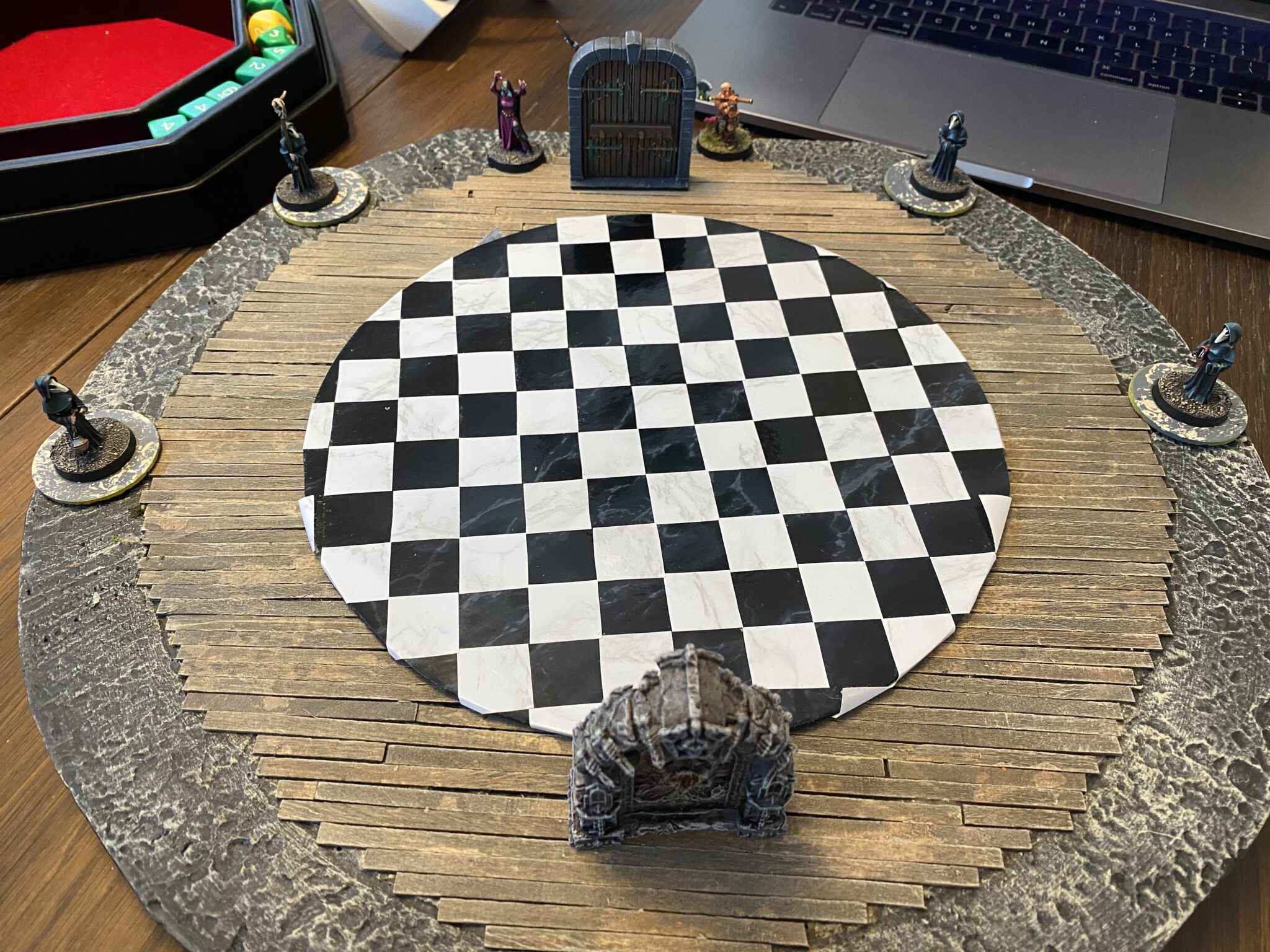 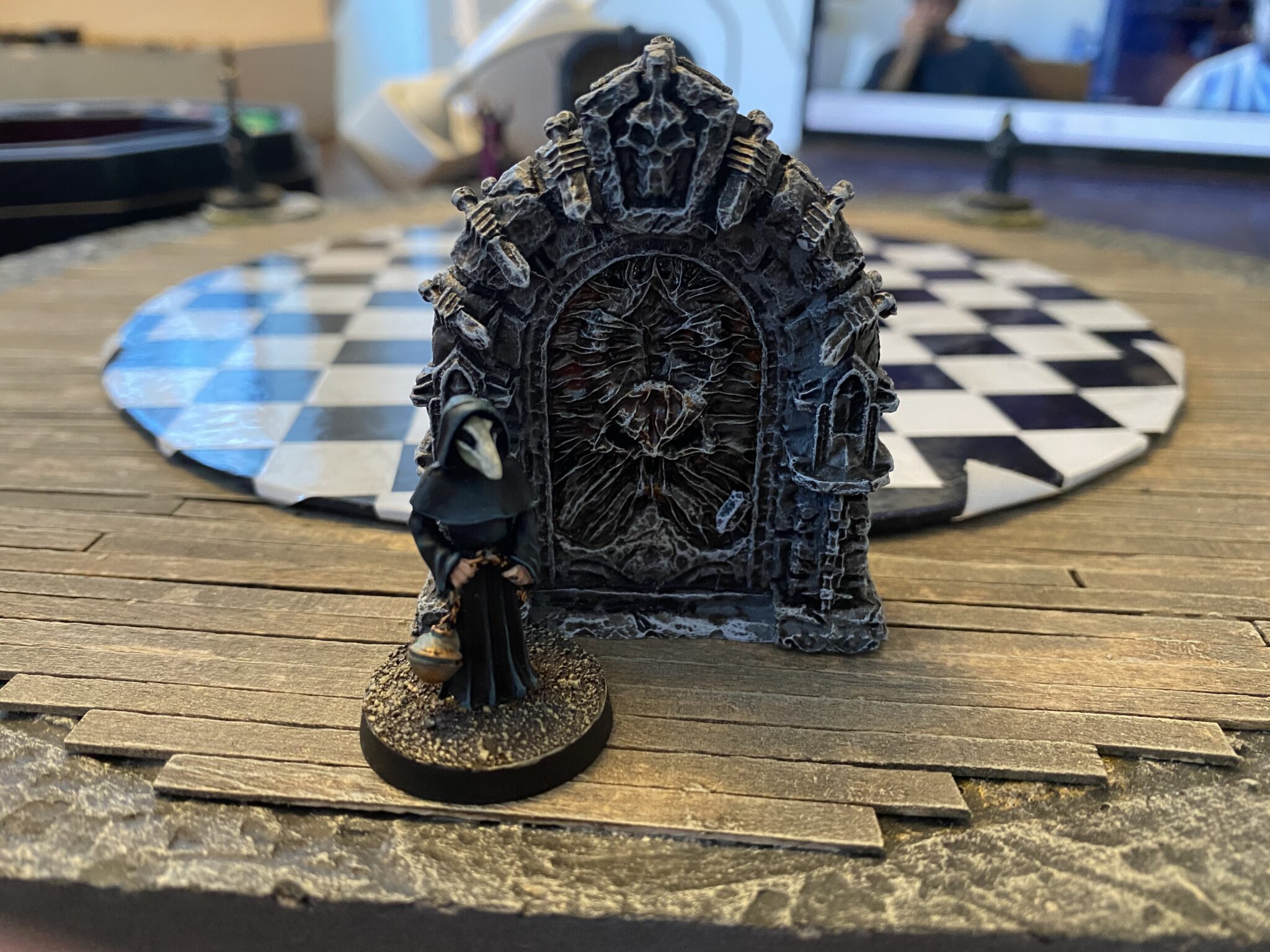 Unfortunately, the portal was guarded by a Half Giant and a Minotaur champion, who both set loose on Grimshaw as he charge forward. To their surprise he was much tougher than they expected and to make their life worse, Damon the Paladin quickly came to Grimshaw’s aid. 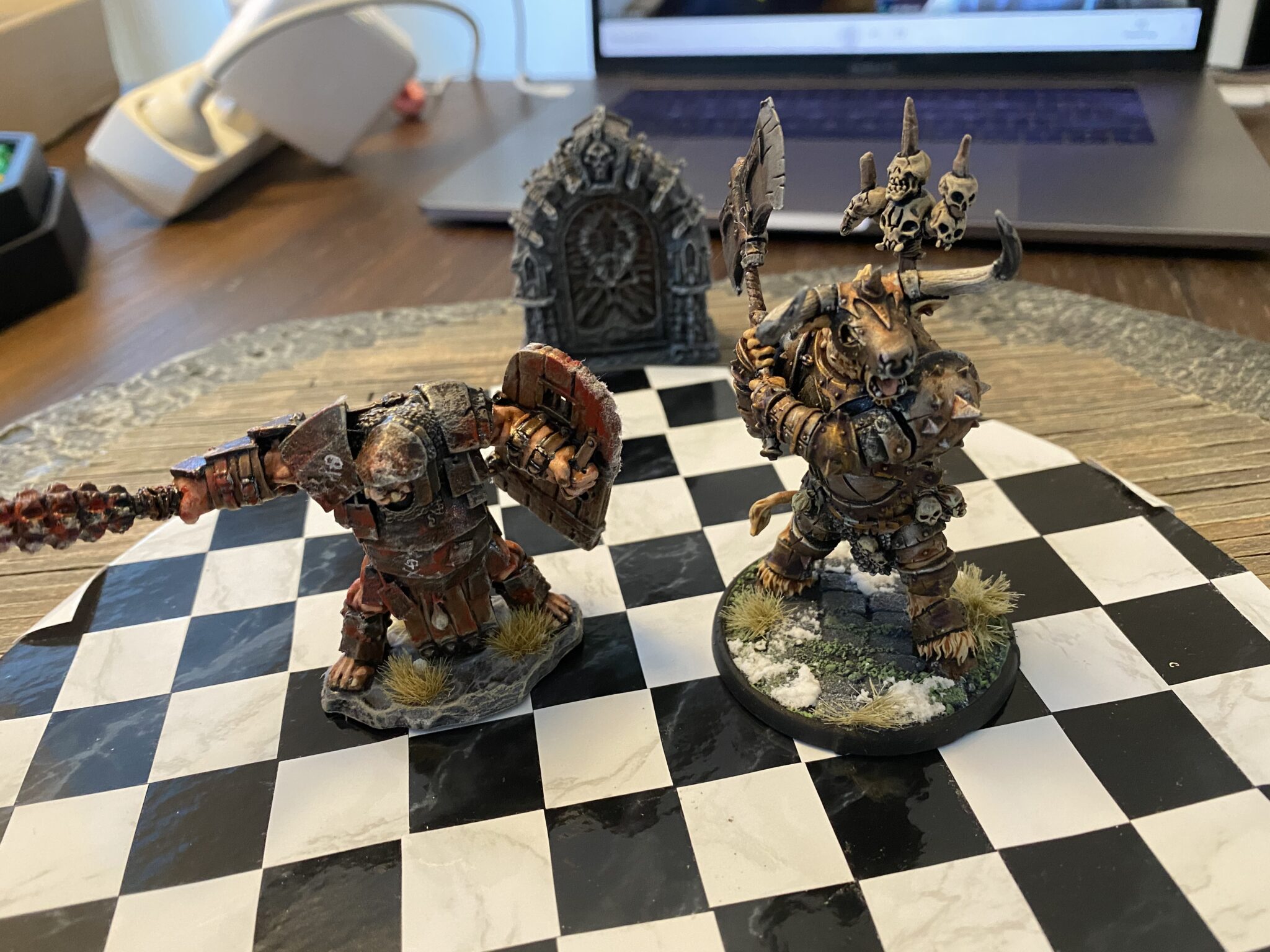 And the tides of the battle quickly turned, with Grimshaw suddenly feeling the surge of power of the Great Spirit Bear entering him and in one single massive uppercut blow with his hammer, he ripped the Minotaur’s head clean off, sending the head right into the ceiling where its horned pinned it firmly before the body fell to the floor. 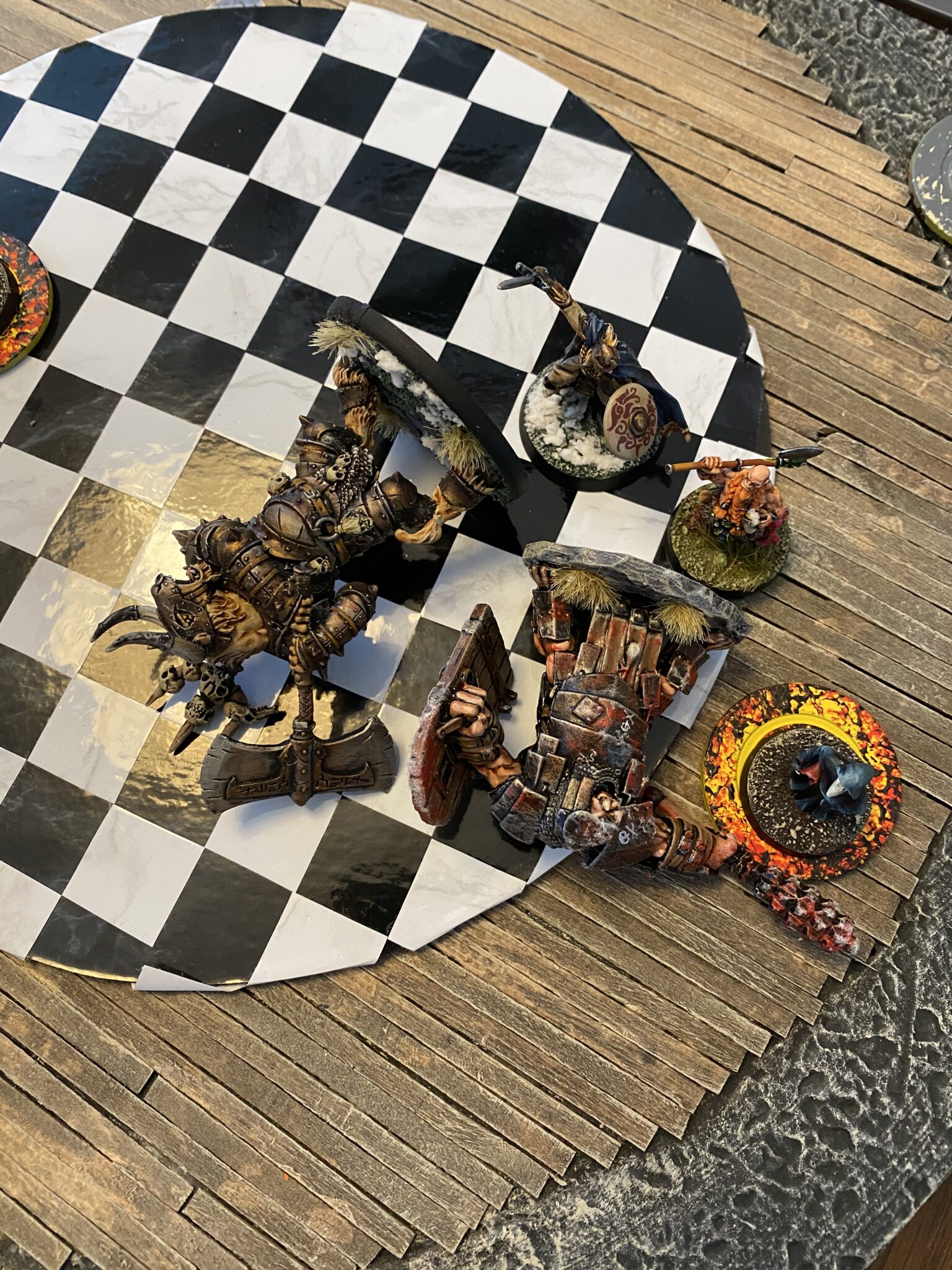 But the battle had just begun.

As the two warriors turned to see what Alyanys pointed at, they saw a Greater Demon, a mighty Balor, emerge from the portal.

With its abyssal gaze, it saw Alyanys for what she is: A servant of its most despited enemy, the Devils. And it swung is mighty flame whip and lashed out only to miss her by an inch. 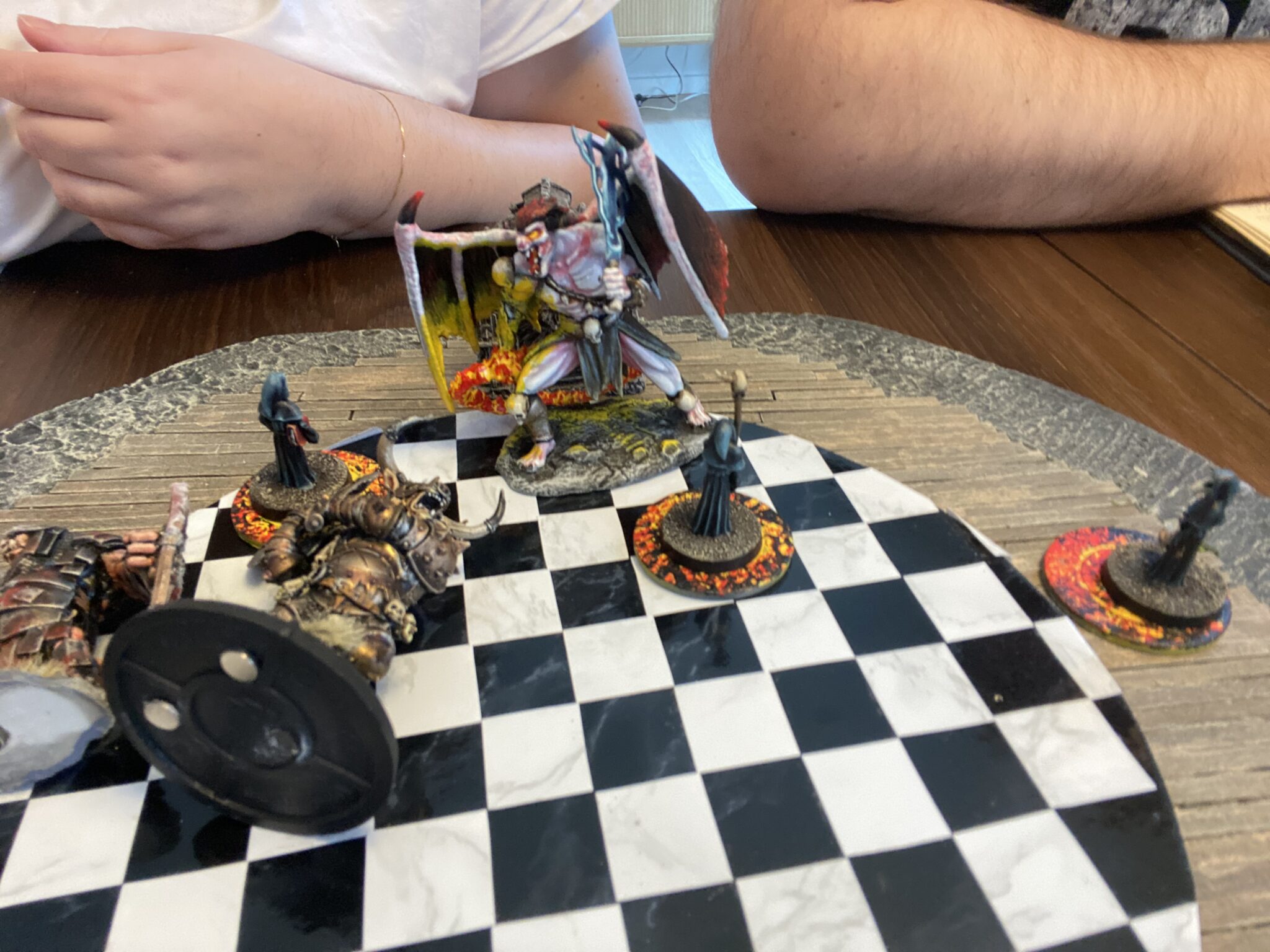 Alyanys didn’t lose her cool and held back her Witch Bolt planning to fire it at the same time of the last of the cultists, but unfortunately it gave the Balor time to swing the whip again, this time catching Alyanys and dragging her all the way to its infernally hot body. 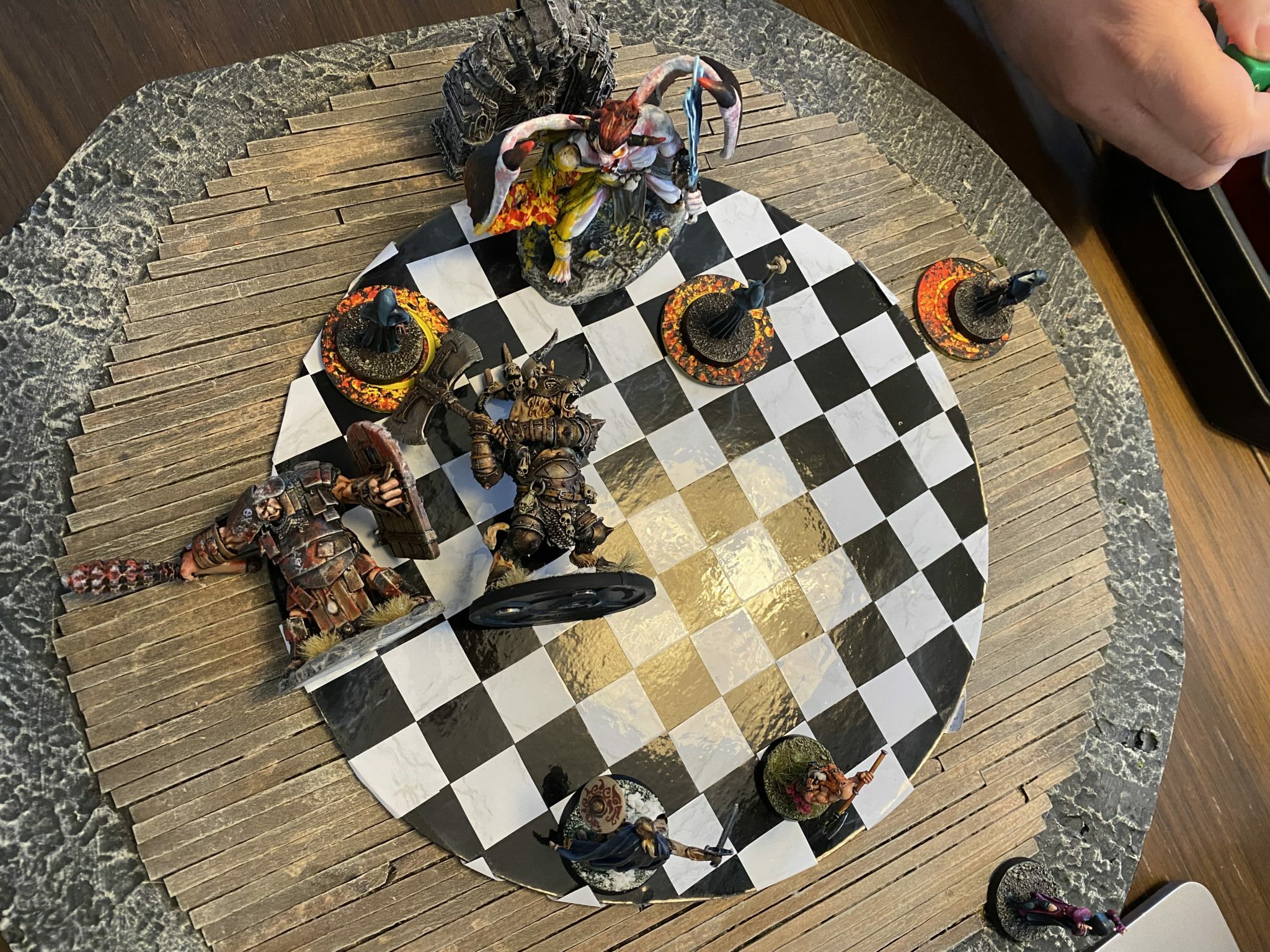 Grimshaw, badly wounded, used the last of his energy to leap forward and yank Alyanys free from the flaming whip. Grimshaw knew his strength would be no match for the Demon lord, but nevertheless desparation came to his aid and he pulled Alyanys free and threw her several meters away to safety, only for himself to be burned to death by the Balor’s heated body.

Damon quickly ran to Grimshaw’s aid to bring him back to life while Alyanys let her Witch Bolt loose on the portal to overload the summoning. 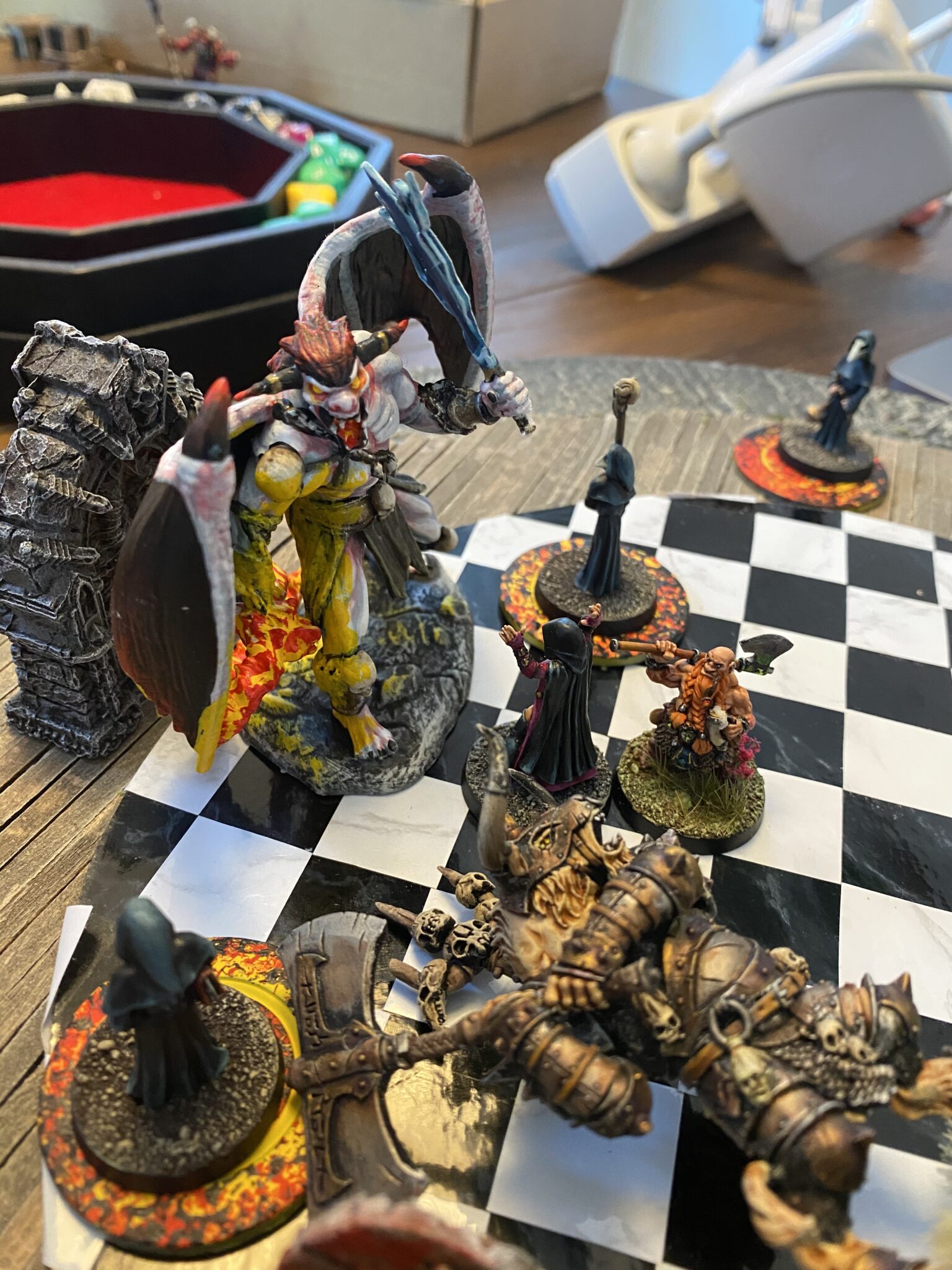 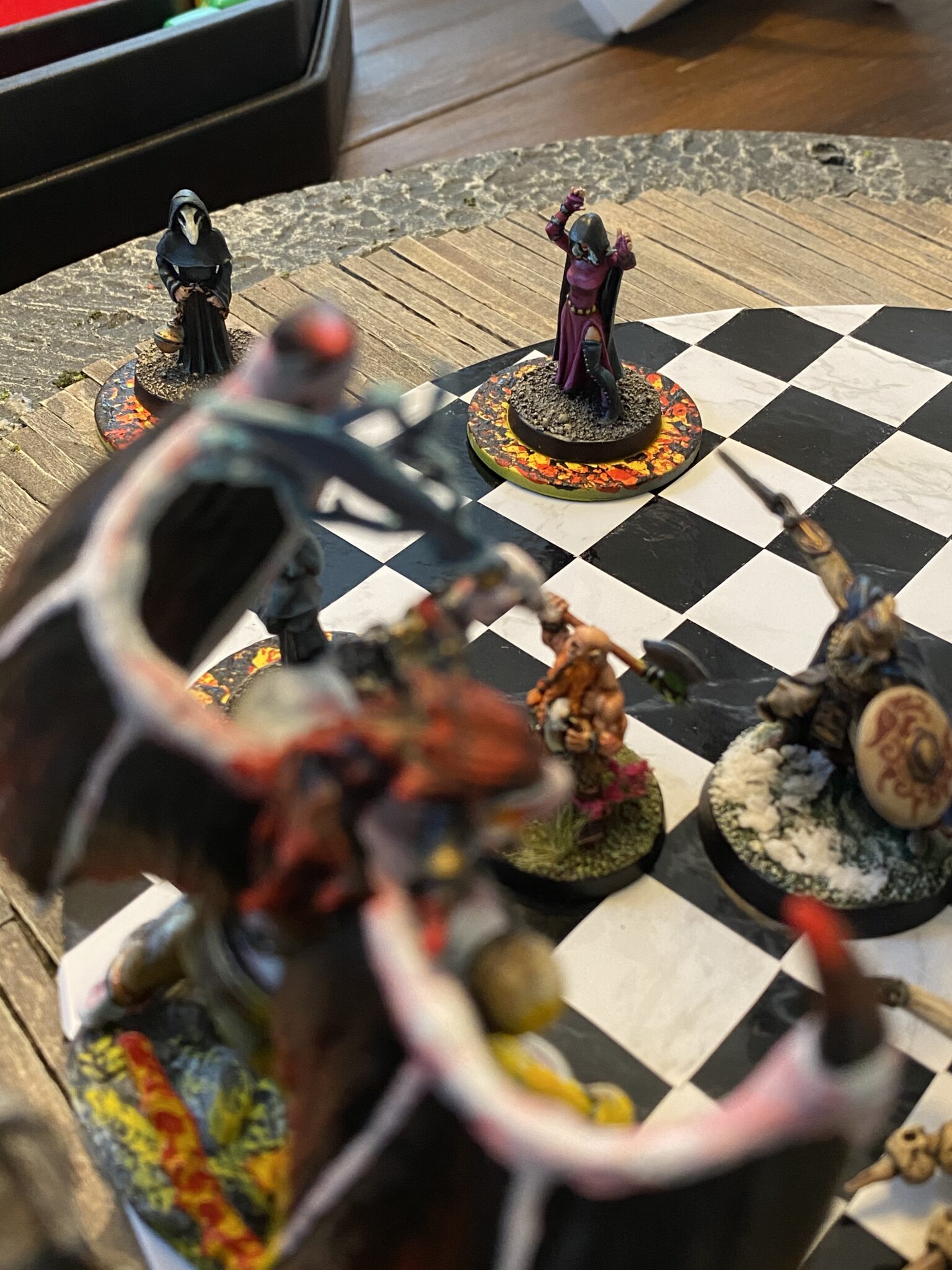 The Demon swung is whip again, but never latched out. Instead something grabbed the whip from beyond and pulled the Demon back into the abyss like as if it was a mere rag doll and in its’ stead emerged Xinphalaxal, The Pit Fiend and Patron of Alynanys’ powers that suddenly all came back to her.

The Demon was gone but the mighty Arch Devil had appeared happy and in ecstasy of all the souls he would have access to.

The Cultists woke up from their trance realising what has happened. Grimshaw and Damon started to kill the Cultists in order to stop the overloaded summoning and for a moment, the Demon reappeared and it seemed it and the Devil fought for who would step through to the Mortal Realm. 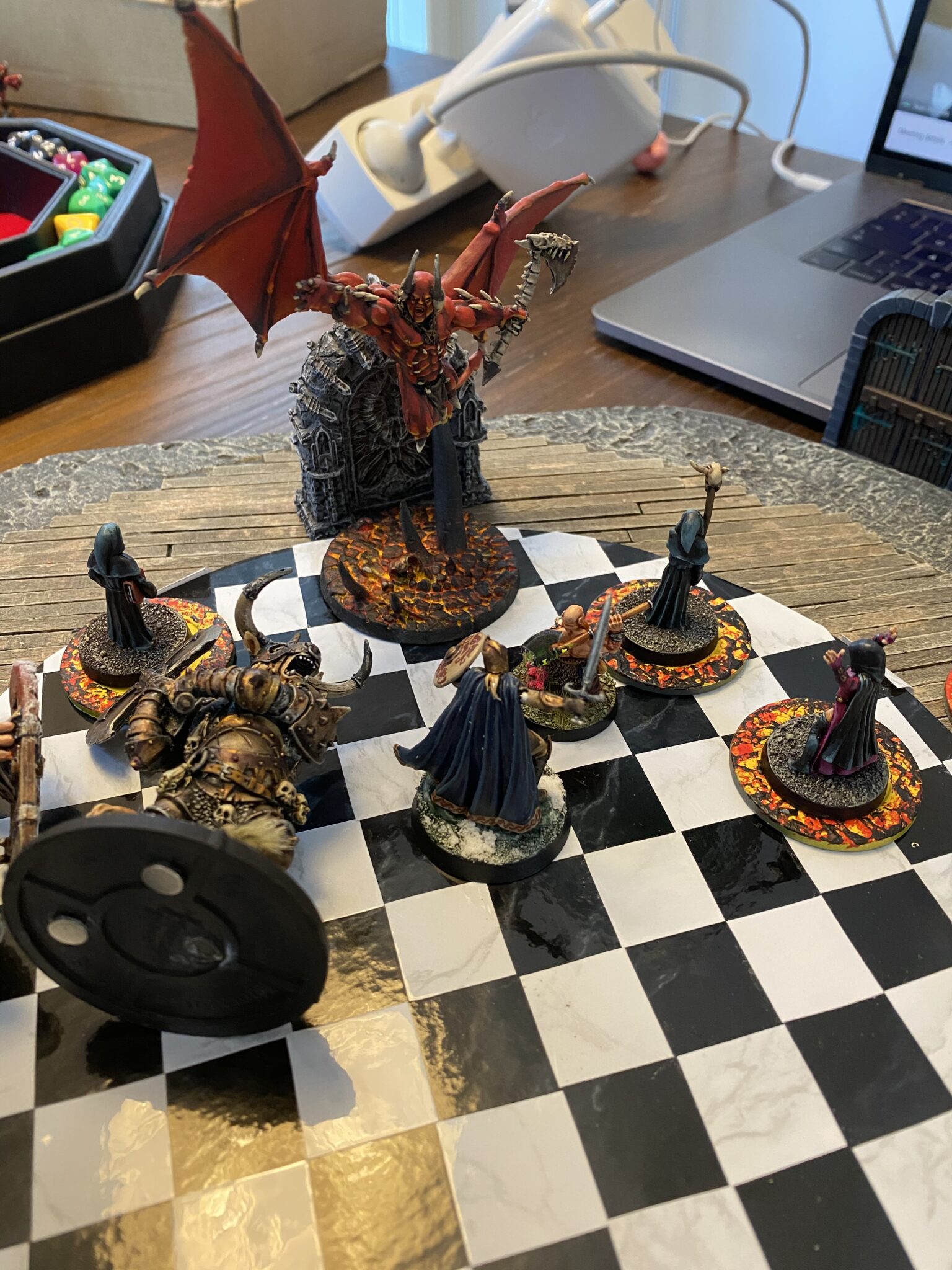 However, the Handsome Devil suddenly came through the door, firing a double Witch Bolt in an attempt to bring his master, Xinphalaxal through.

Then Alyanys, suddenly had an epiphany realising she was still feeding the portal with her Witch Bolt.

As if time slowed down, her eyes met the gaze of the Devil as he came to the same realisation… and then she just dropped the spell as if it were a delicate porcelain plate, shattering the last hope of the summoning to succeed. 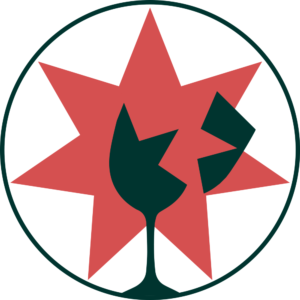 Investigating the cultists, the heroes found an odd Insignia of a broken chalice or glass.

The Handsome Devil, now on his own, realised the dire situation and started explaining his way out of it, but the party, weary of the battle, simply walked past him and ended his life in the Mortal Realm as they left.

The Great Spirit Bear appeared and gave all the party a mighty gift (DM notes, all characters gained 1 level) and Grimshaw received the gift of “Retaliation” for his relentless efforts to squash evil deeds.

And in the background Xinphalaxal applauded his minion, Alyanys’ effort to keep the Demon out and granted her the ability of The “Hex Master Curse”.

A friend in need…

As the party returned to the Tavern for some well earned rest, Damon was approached by Braxton Silvereyes, the man with the seven canaries who had helped them into Daisygate.

He said a friend of his had had her house in the forest invaded by an evil wizardy type and was asking if the heroes could help out before it was too late.

Damon turned to ask some questions, but the man was gone. 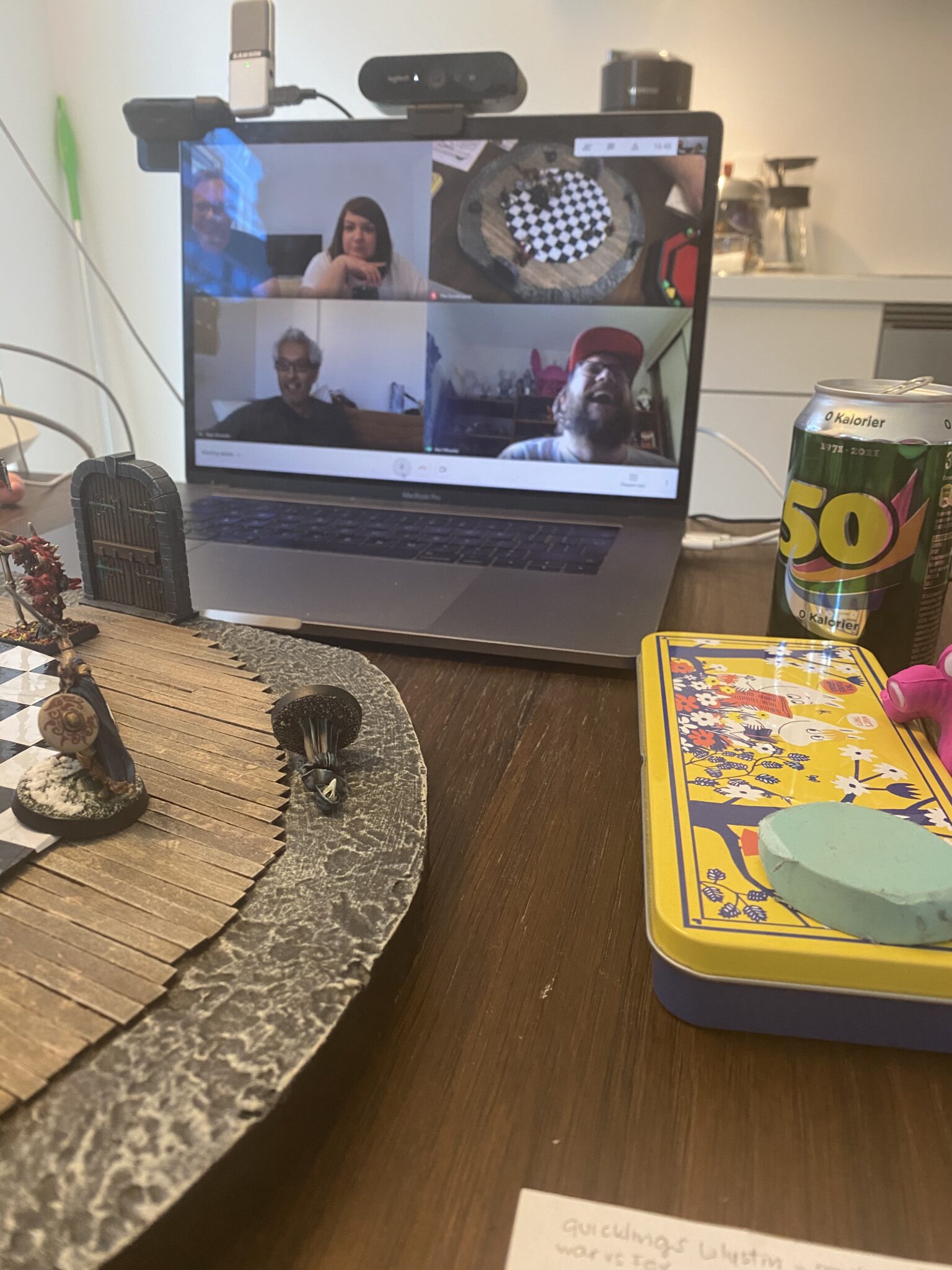 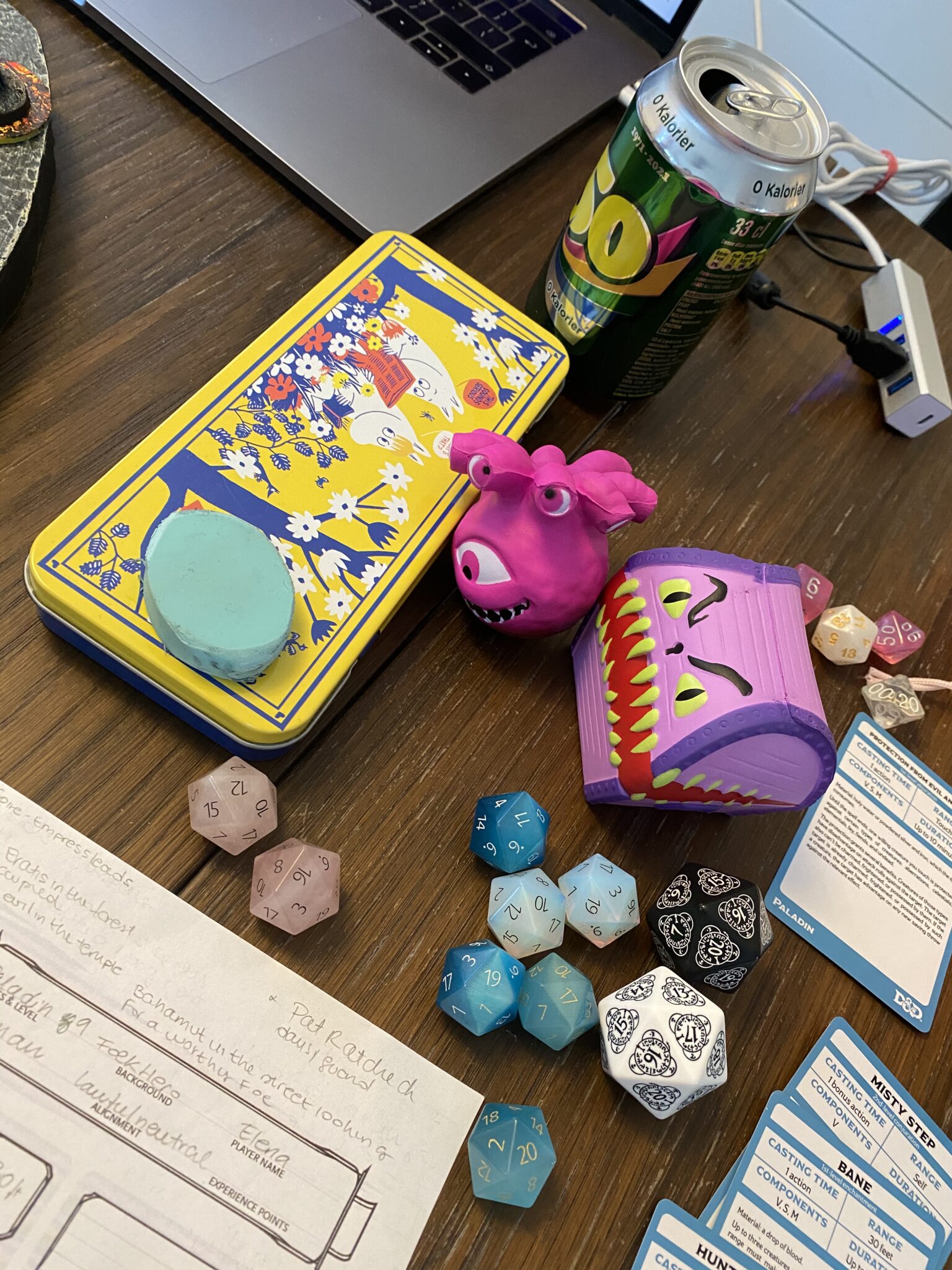 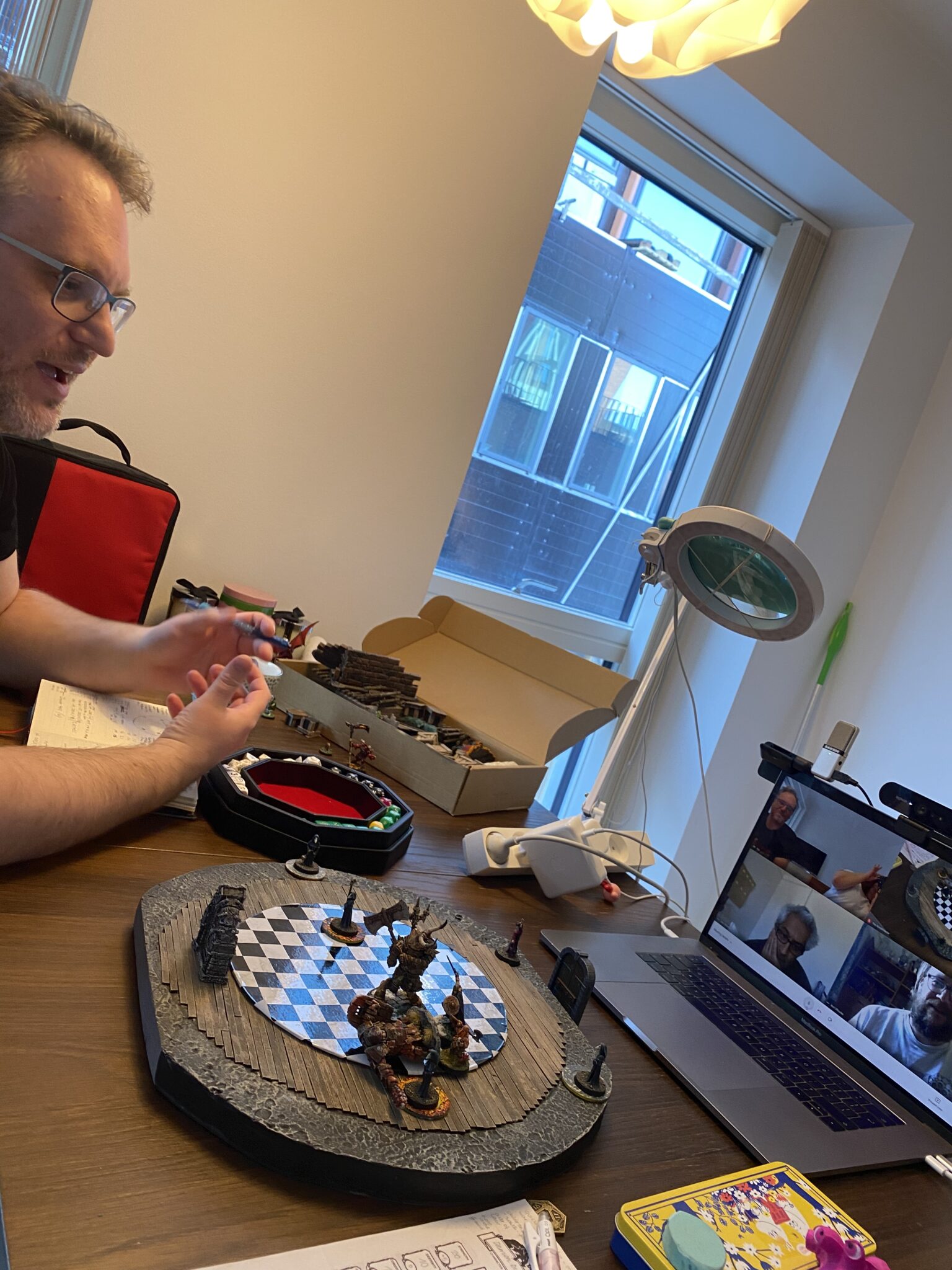