Our heroes Double Trouble was being chased by the local city guards, The Keepers of the Balance, for having killed multiple citizens and by The Pink Ladies for having (somewhat inadvertently) been the cause of their leader, Rizo, losing all her hair!

But they had found sanctuary in the hidden Shelter of Sekhmet and stayed until the following evening when they decided to run for The Blitz now that they had both dresses and tickets.

Discussing the city layout, the preferred route took them through two major crossings before entering the open space before the entrance to The Blitz.

Sneaking past the Keepers of the Balance

Our heroes stayed close to the walls as they neared the first major cross point.

While Penny could turn them both invisible, there was always the risk that the their pursuers would be carrying a Soulglass, a spyglass-like device that can see through most common magic spells, making relying on invisibility and alternation spells risky.

At the crossing, almost out of sight, stood three Keepers of the Balance discussing the pursuit. 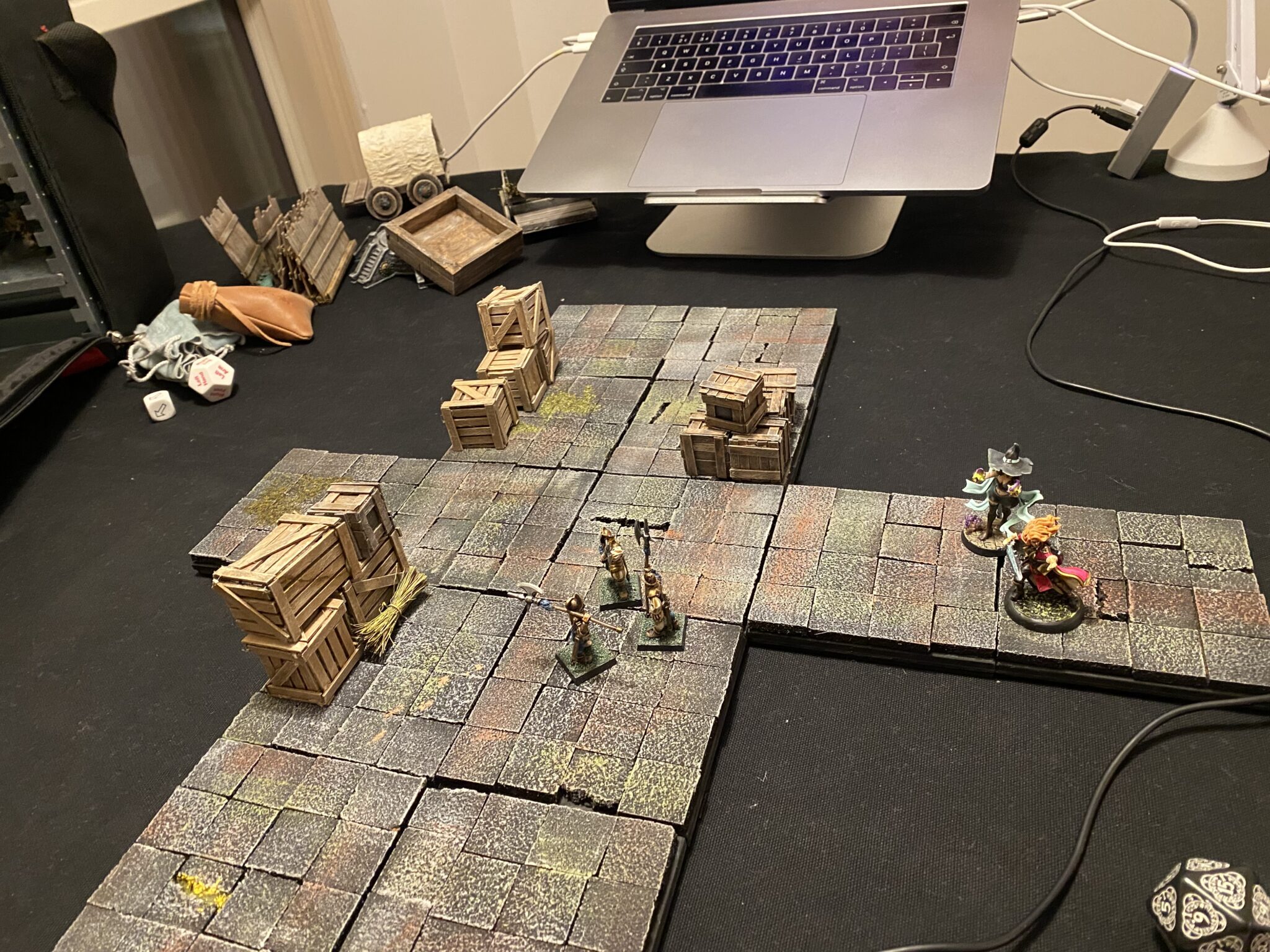 After a quick whisper of discussion, Autumn, our Cleric, decided to sneak up to the corner to see if she could move past them unseen.

Unfortunately, one guard was particularly vigilant and a fight broke out. But the Keepers were no match for our heroes. Autumn soften one with her maul before Penny, our Necromancer, cast a spell sending all three guard into a deep sleep.

Moving on, the heroes felt confident they would make it to the Blitz.

A tense encounter with the Pink Ladies

At the next big crossing, the heroes faced a large open square.

While it was silent, Penny quickly cast Invisibility on both her and Autumn. Even then they still chose to sneak alongside the walls to position themselves behind some crates in a corner. 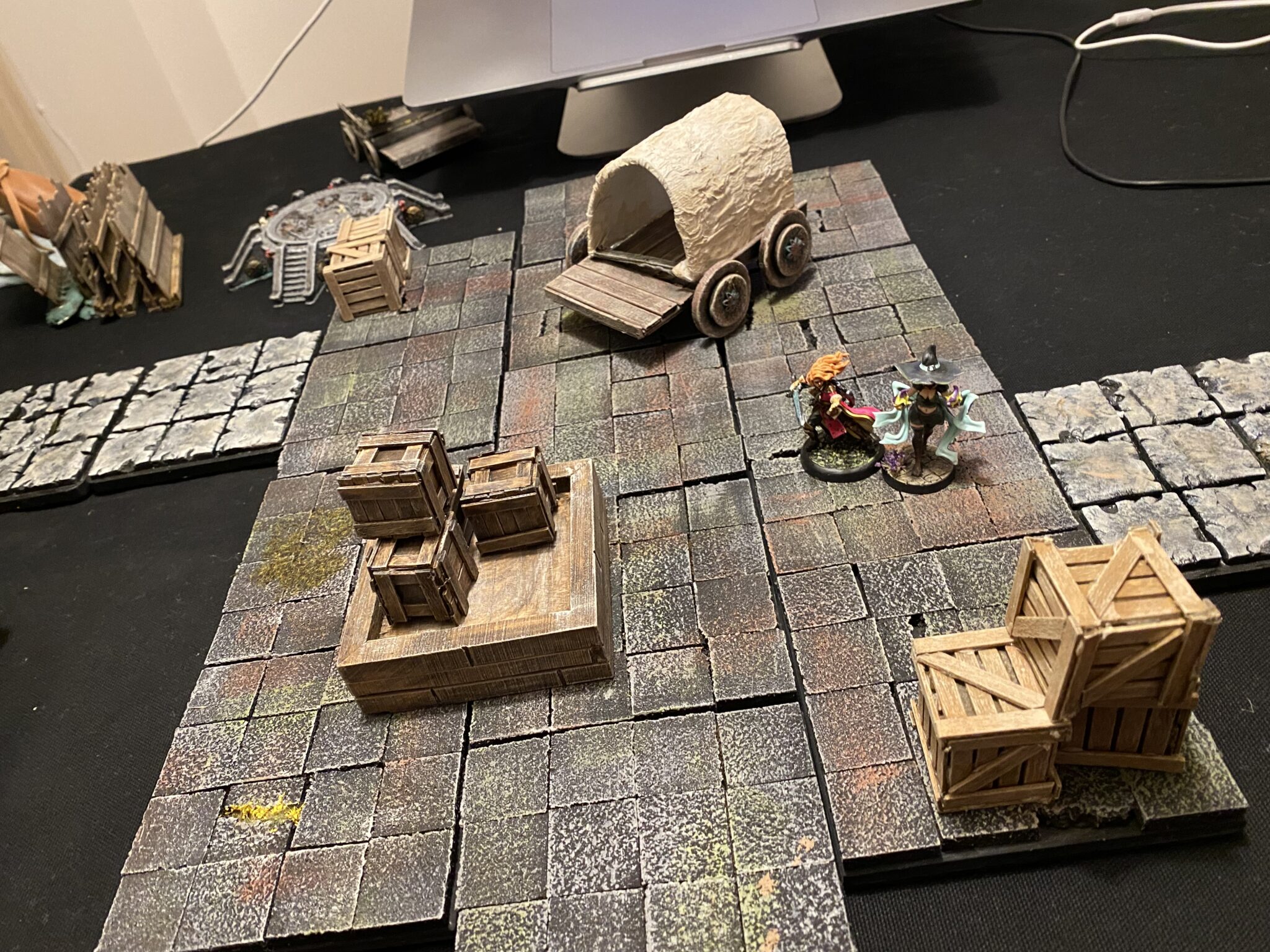 And a good thing they did. Soon after the full gang of Pink Ladies, lead by the angry Rizo, came running into the square. 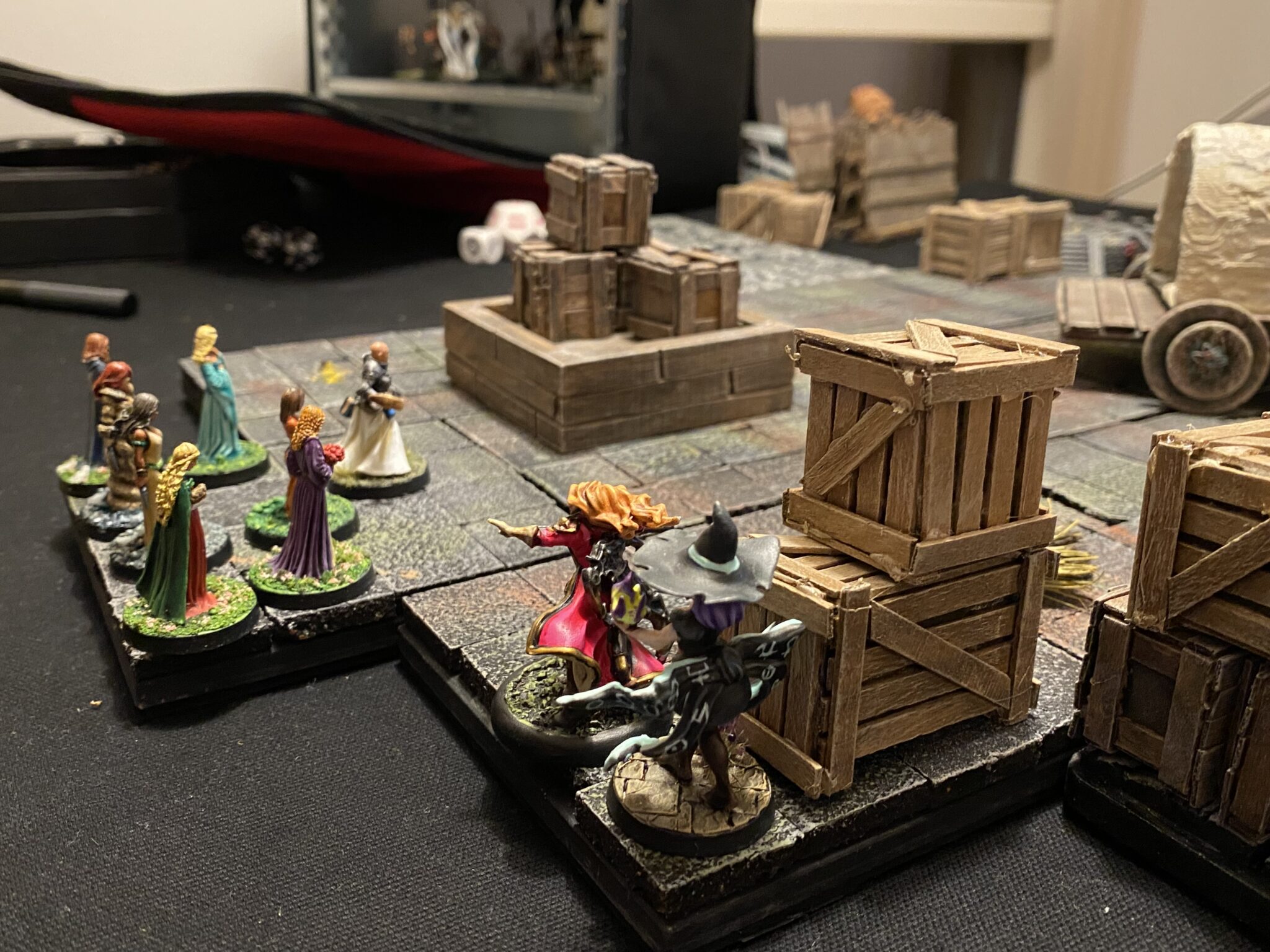 Invisible and out of the way, our heroes held their breathes waiting for the Pink Ladies to move on.

Knowing the square was a likely cross point for the fugitives, Rizo positioned her team at all exits while she herself stood in the middle with her Soulglass. 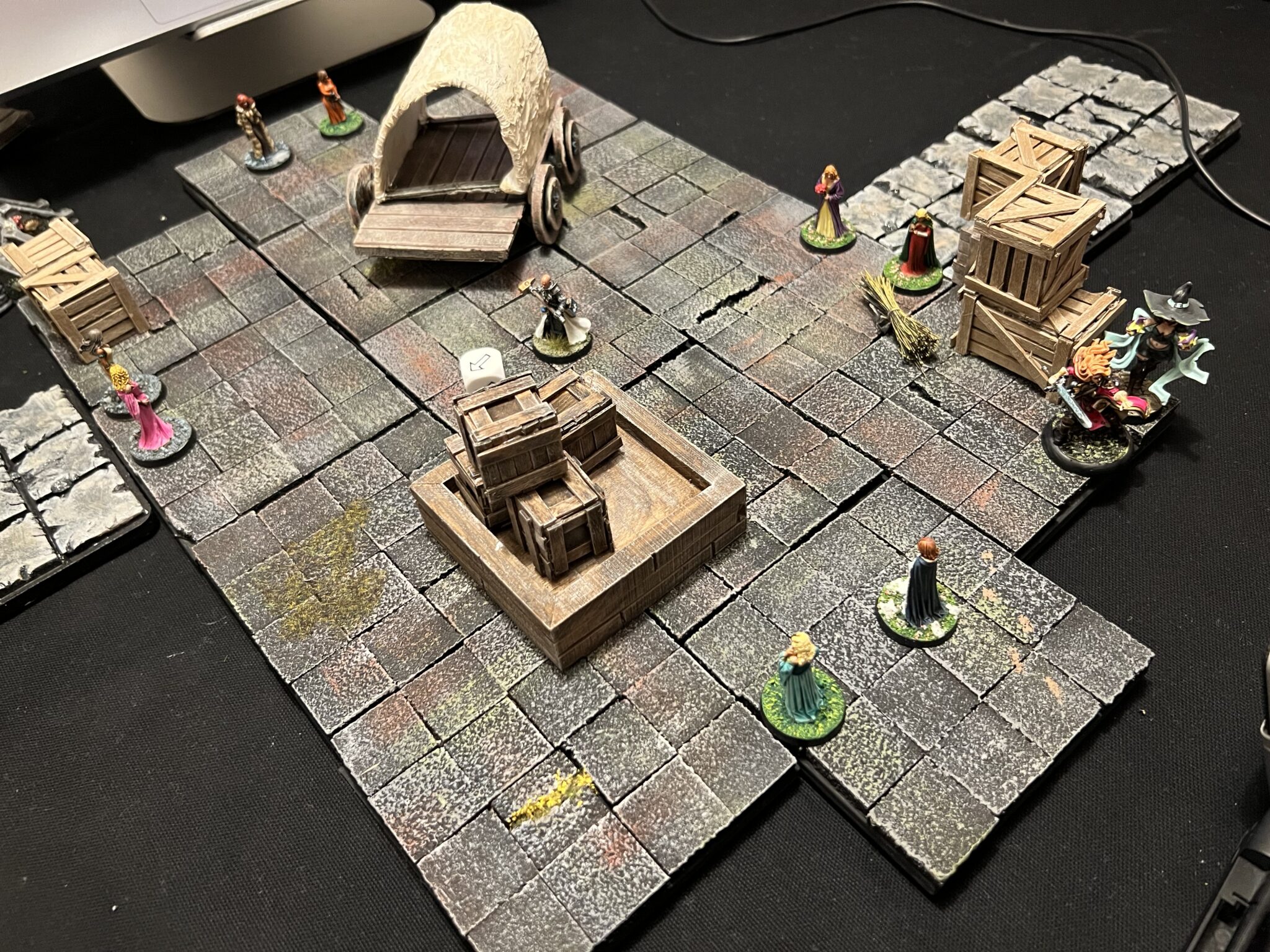 Fortunately, she was scouting in the wrong direction and turning clockwise away from our heroes (See arrow dice for starting direction).

The heroes decided to sneak past the big square platform. 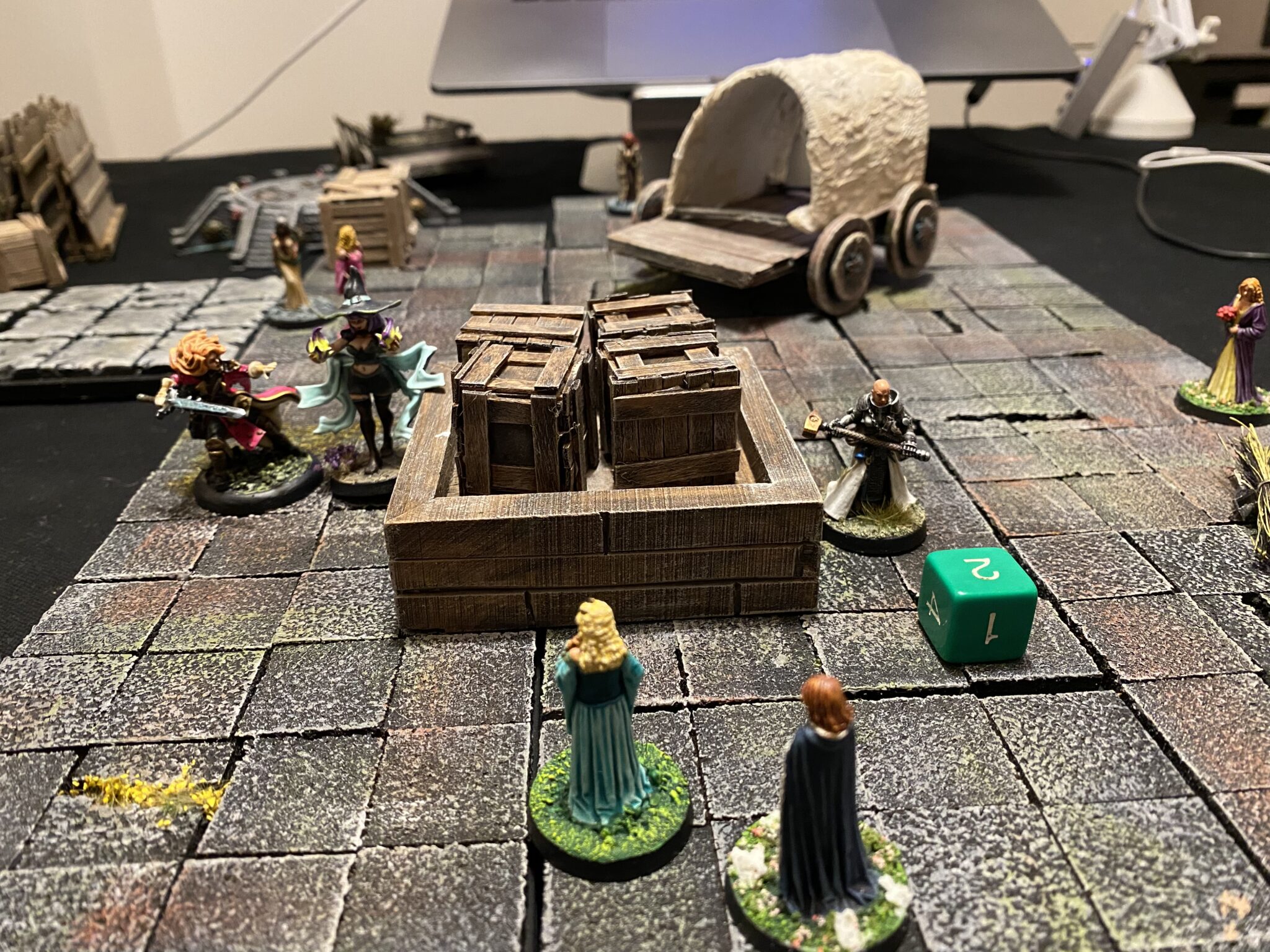 Unfortunately, one of the Pink Ladies heard Autumn kick a small pebble and while she couldn’t see our heroes, she took a while stab in the blind with her dagger narrowly missing Autumn.

the commotion was enough to alert Rizo to come running with the Soulglass.

But Double Trouble kept moving towards the exit remaining out of sight of the Soulglass.

But the Pink Lady who had heard them, did not give up and with her keen ears heard the footsteps of Autumn leading away, She quick ran after our heroes with arms wide open, ran into Autumn and grapple her! 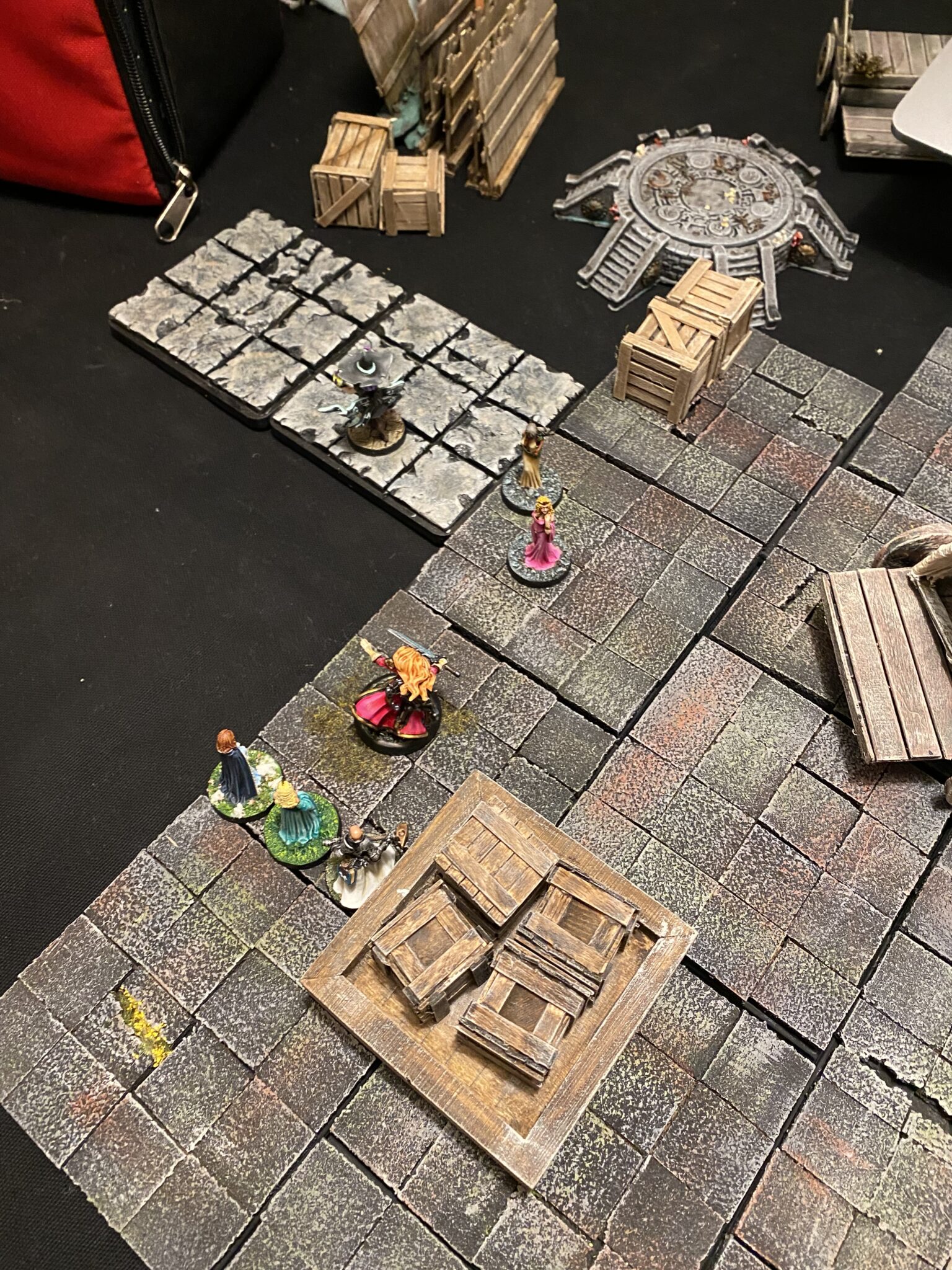 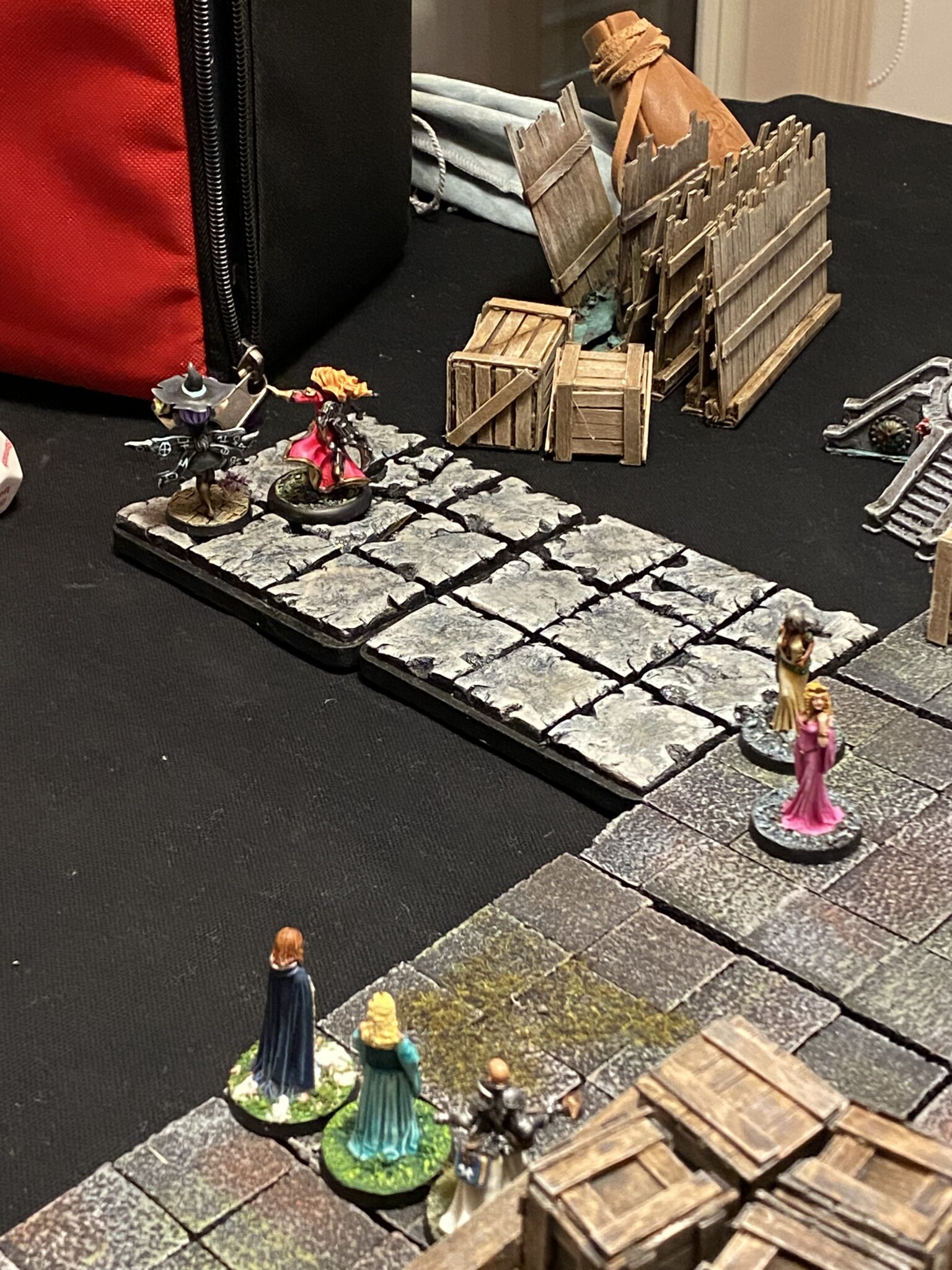 Penny, still invisible, ran towards the exit, while Rizo ran towards the grappled Autumn with the Soulglass in one hand and her Hammer of crackling thunder energy in the other.

Finally Autumn broke free, only to be hit by Rizo’s hammer, but in the end our heroes escaped, now visible with the Pink Ladies in hot pursuit. 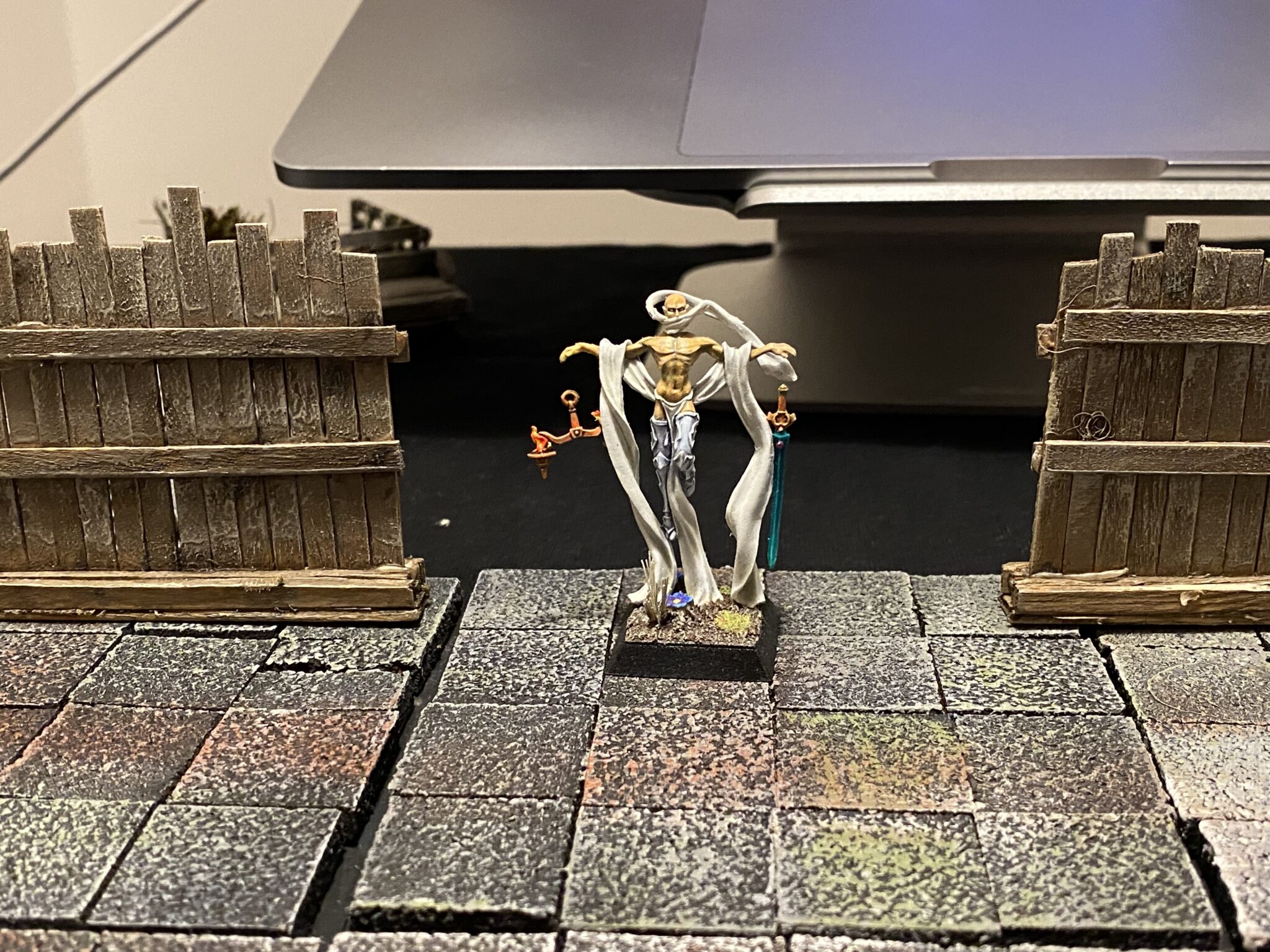 As they ran, the heroes could finally see the entrance to the Blitz and its mysterious doorman, Steve Strange hovering in the air, calm and emotionless as always. 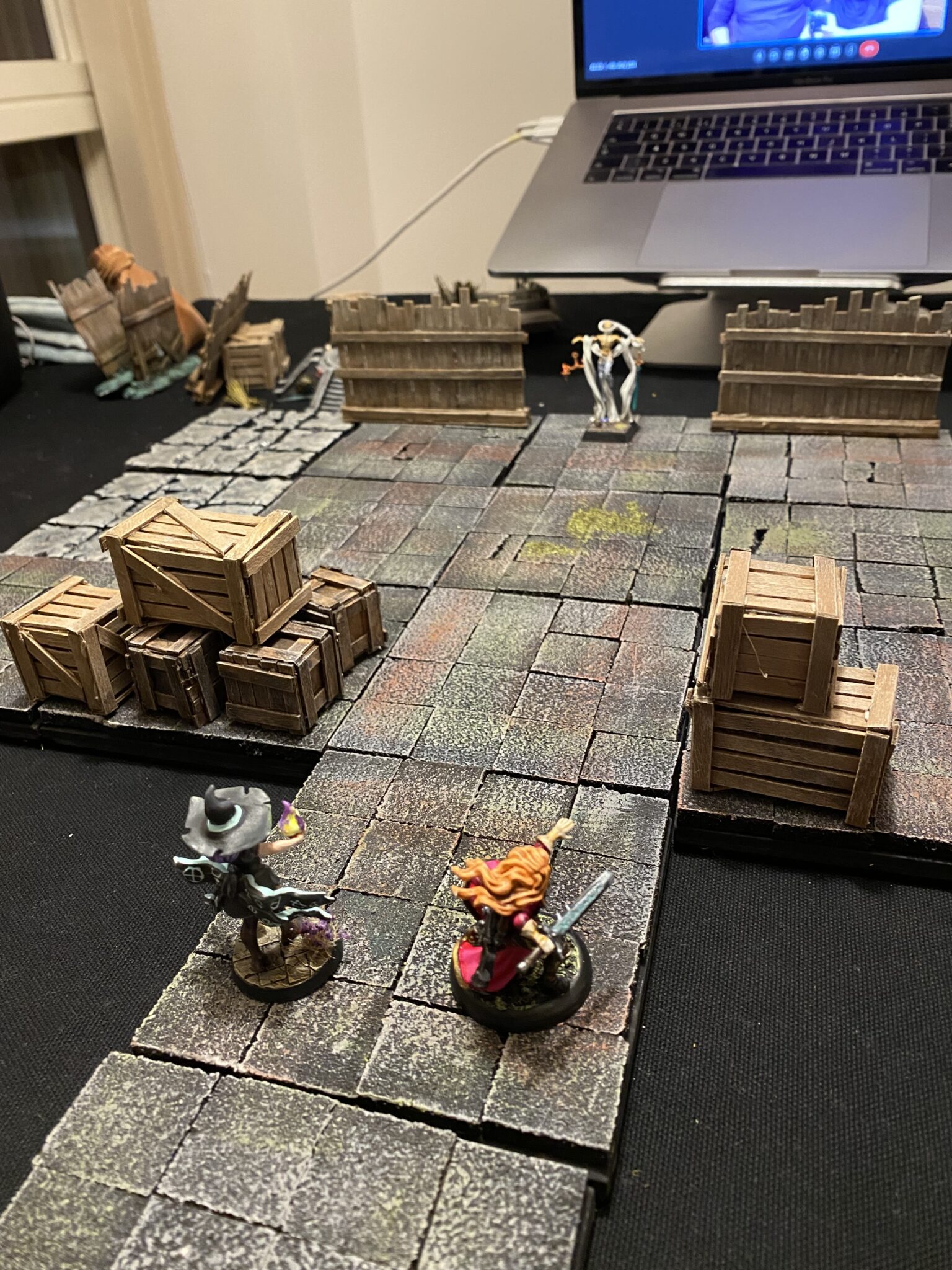 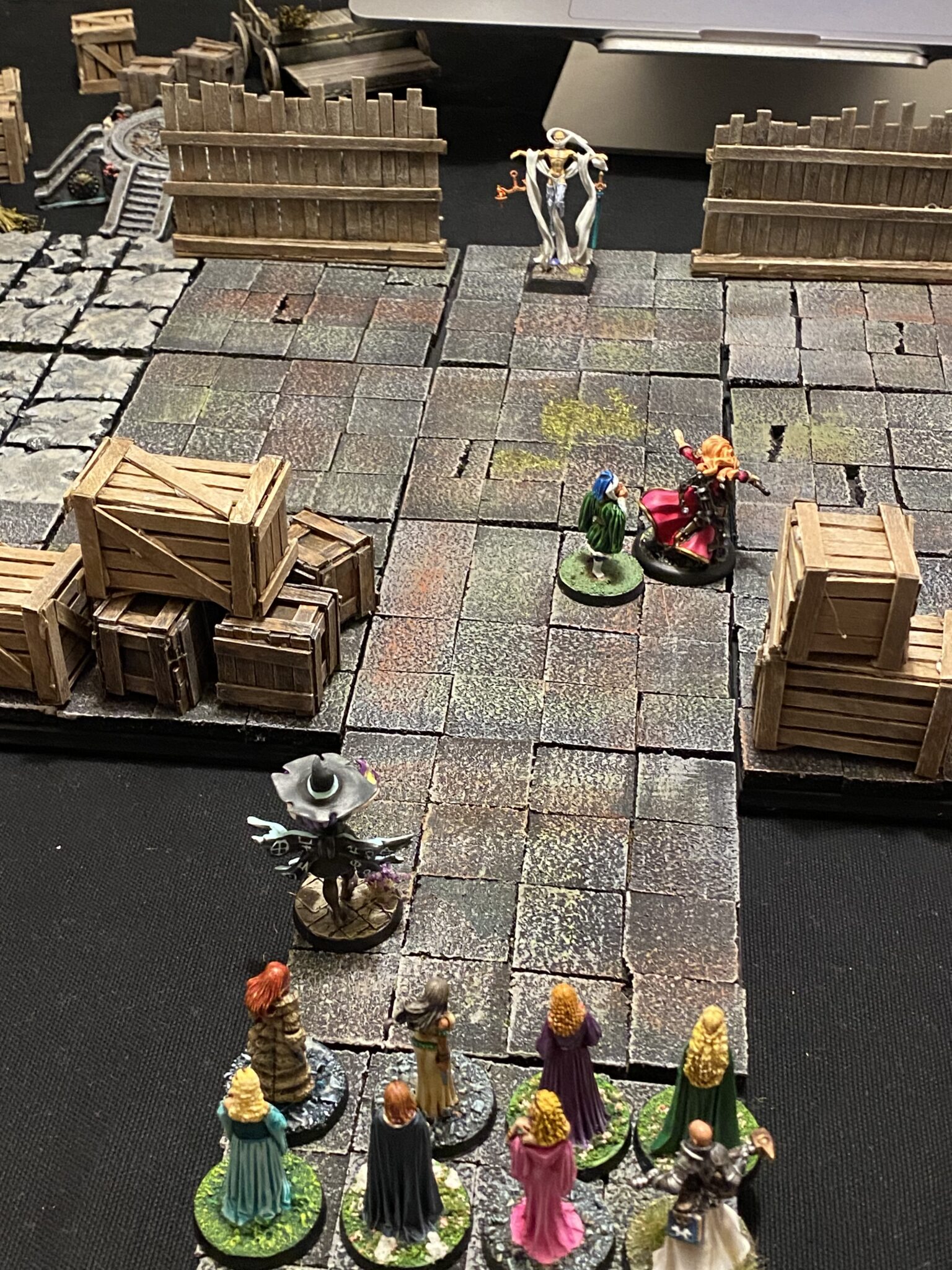 But as Autumn ran towards the entrance, a figure jumped out from behind the nearby crates and attacked her trying to stab her with a vicious acid-dripping assassin’s blade.

It was the Joe, the Jolly Tailor, a local dressmaker that the heroes had only had a brief encounter with.

Fortunately his desperate assassination attempt to kill Autumn and steal her dress and ticket, failed miserably as he fell flat on the uneven cobblestones.

And as Penny ran to the doorway, the drains in the road burst open and the ratling lady the heroes had saved when Penny got to town, jumped out with a gang of her kin attacking the Pink Ladies.

The heroes ran to the door, waved their tickets at Steve Strange and left the street fight behind.

The foyer of the Blitz

As Double Trouble stepped through the door, a spell cleaned them up, adjusted their makeup and sorted out any glitches in their hair.

Now they were ready to enter The Blitz.

Inside the foyer, the heroes took a short rest with some nibbles and champagne while flirting with the two masked doormen charged with opening the big golden gate leading into the ballroom of the Blitz.

Dance off in the Blitz 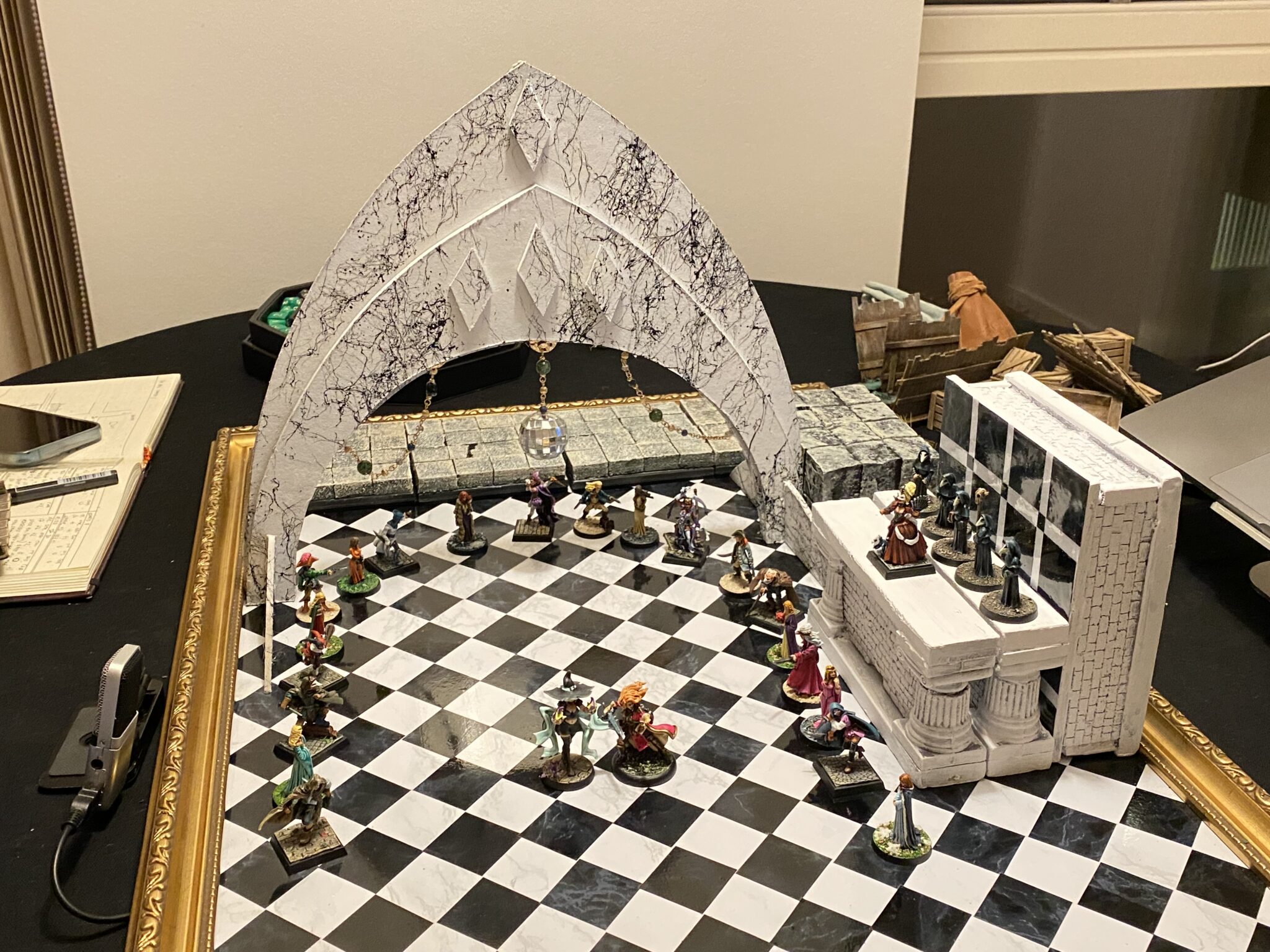 Inside the dome that made up the ballroom of the Blitz, the heroes saw dozens and dozens of party dressed people enjoying themselves, dancing, drinking, eating, chatting, laughing.

The heroes also noticed that everybody apart from themselves where wearing white masks.

From the centre of the dome was hanging an enormous crystal ball.

And to the right was a balcony with a woman dressed in a dress in a multitude of colours that looked like it was floating in weightless space, or water, defying gravity. Behind her stood a small group of partygoers all dressed in beautiful outfits, but all of them curiously made in the same grey colour.

The heroes recognised one of the people in grey as Fayth, the Necromancer student they were looking for! 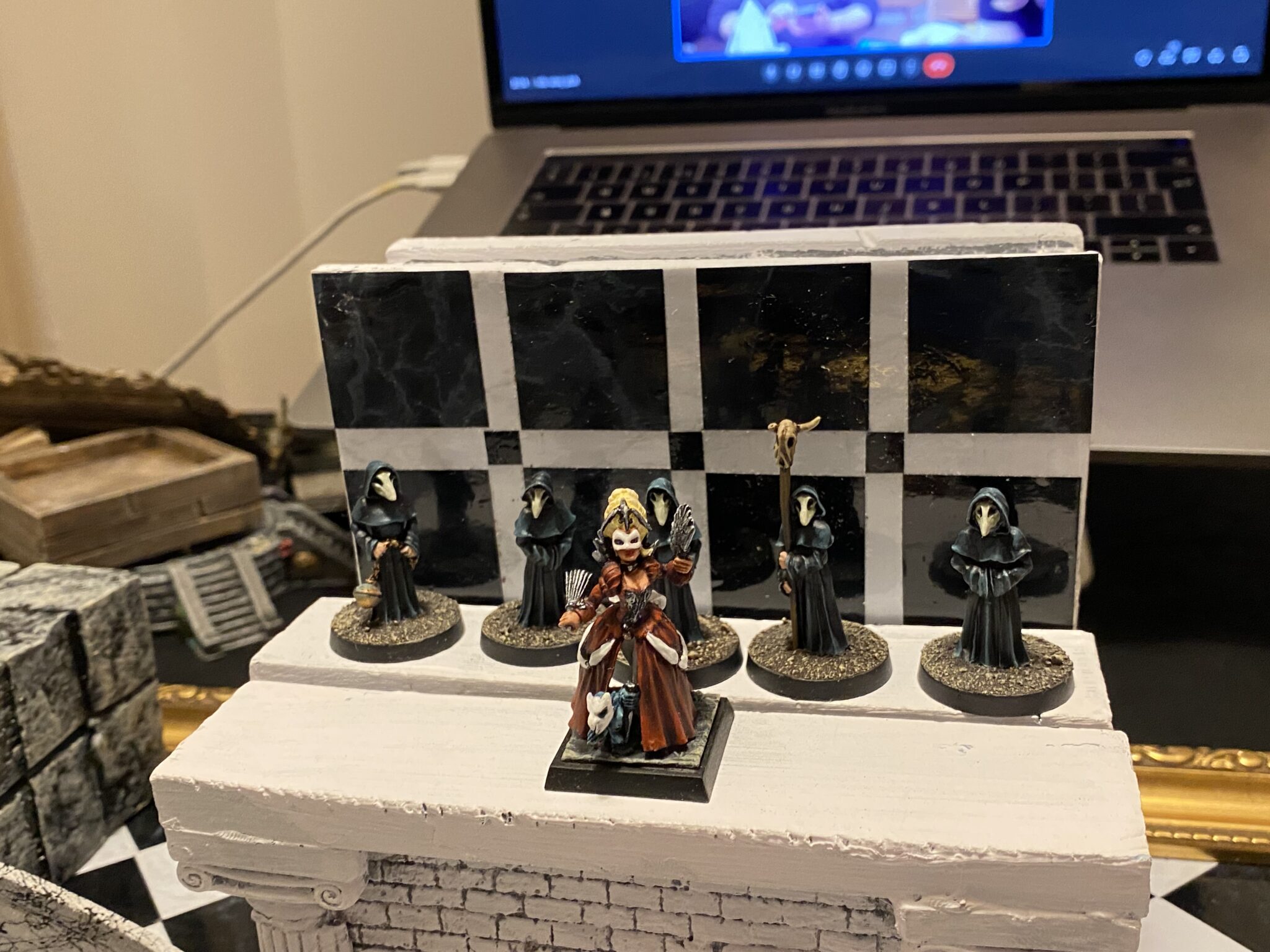 Then the woman on the balcony spoke.

“Welcome newcomers! Please join the dance floor and dance with one of our guests.”

Autumn, generally not that fond of crowds and parties, felt she had to do something to strike a pose and she shone a magical light on the big Crystal Ball, which to her surprise duplicated her spells multiple times and sent rays of light in all directions to the delight of the crowd! 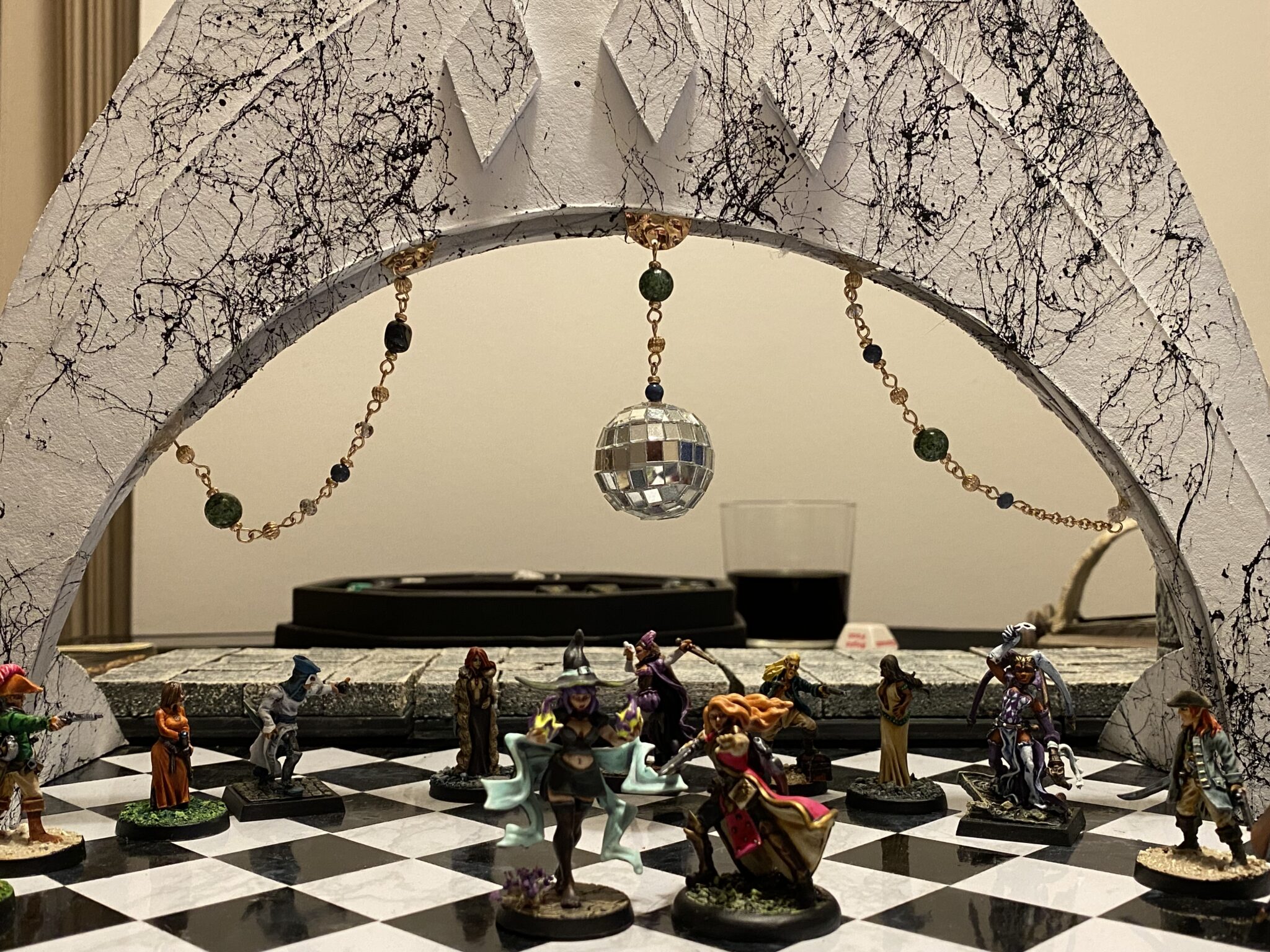 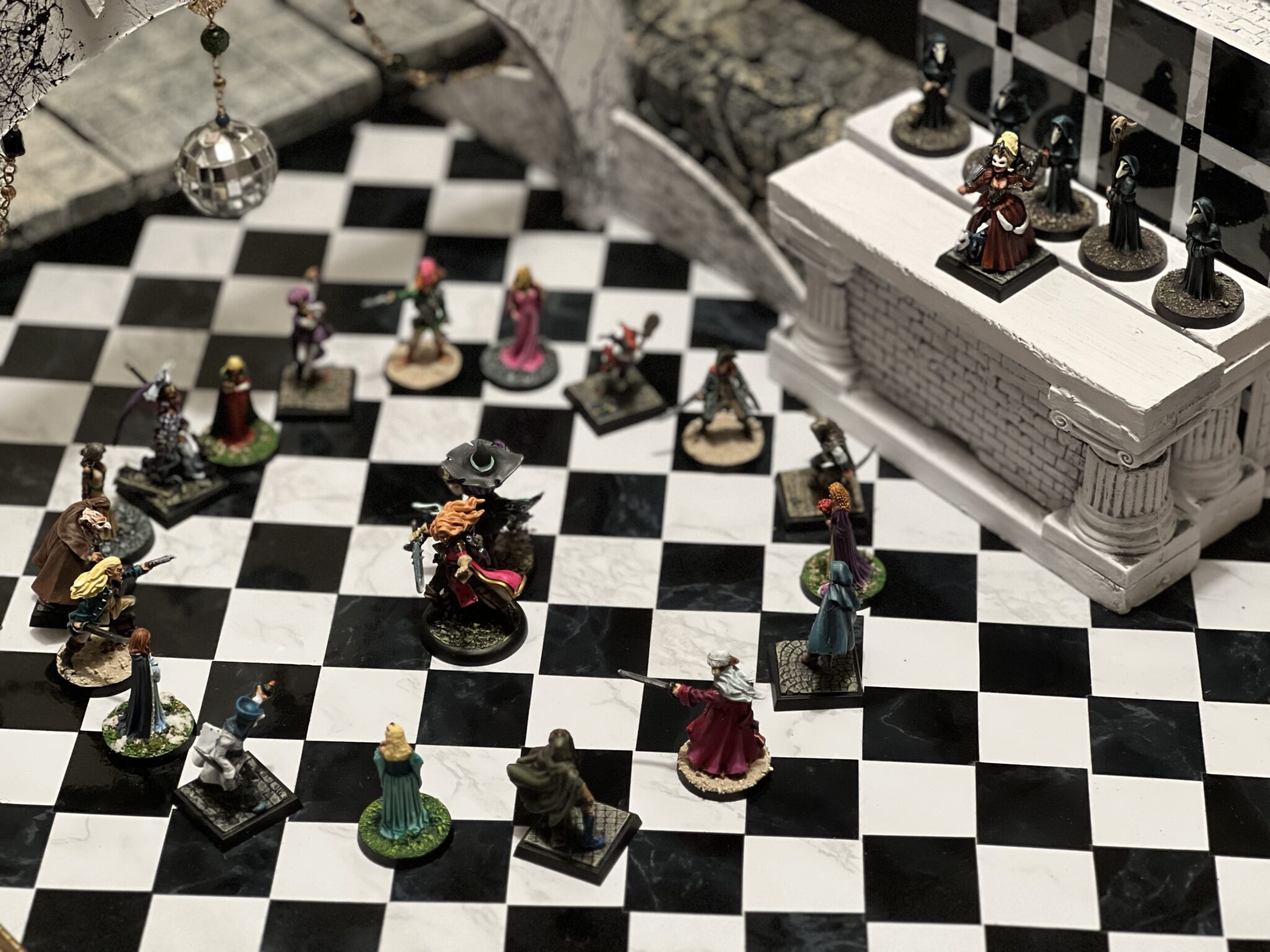 The heroes each chose a partner, but soon realised this was as much a fight to the death as it was a dance off! 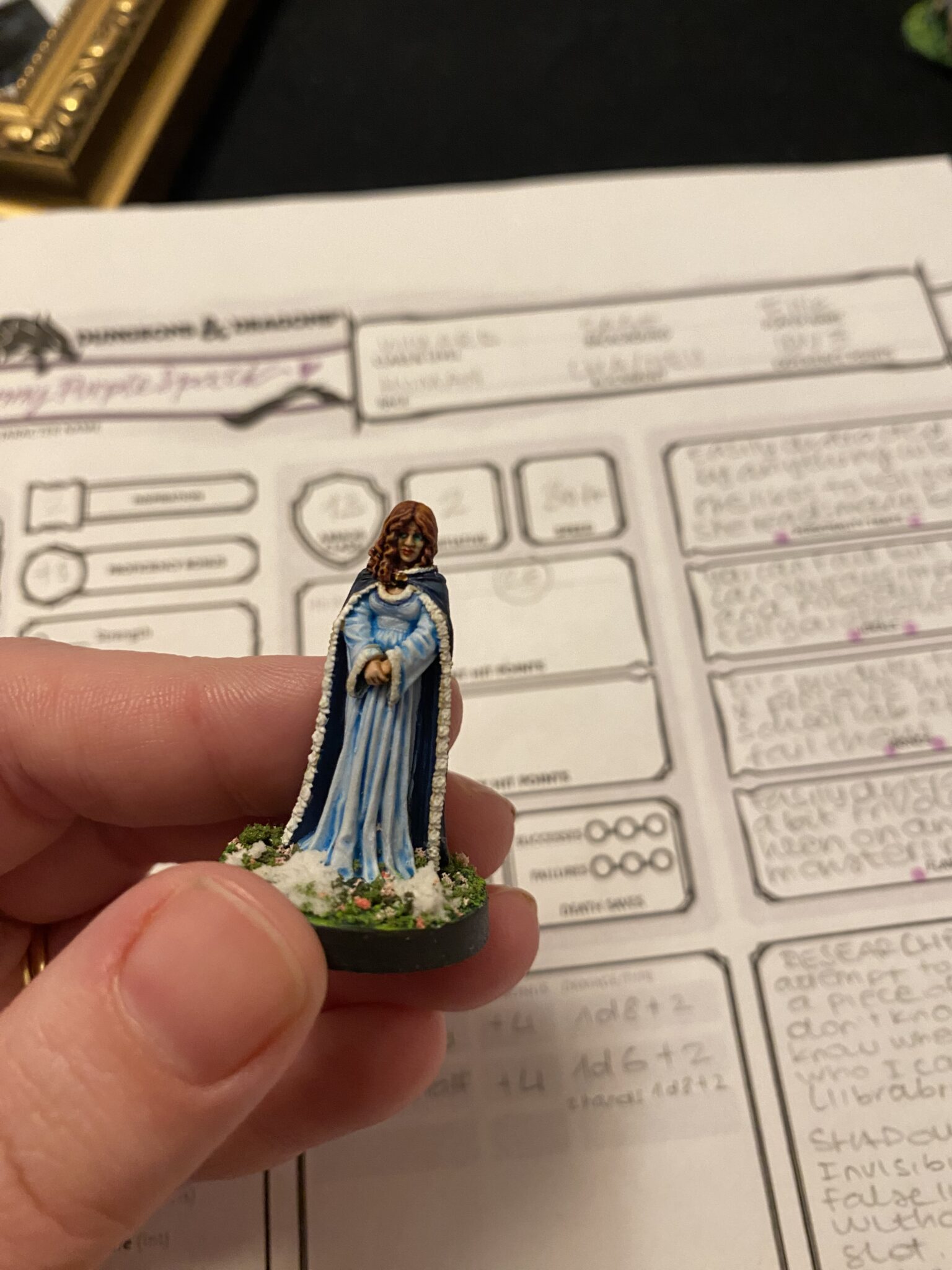 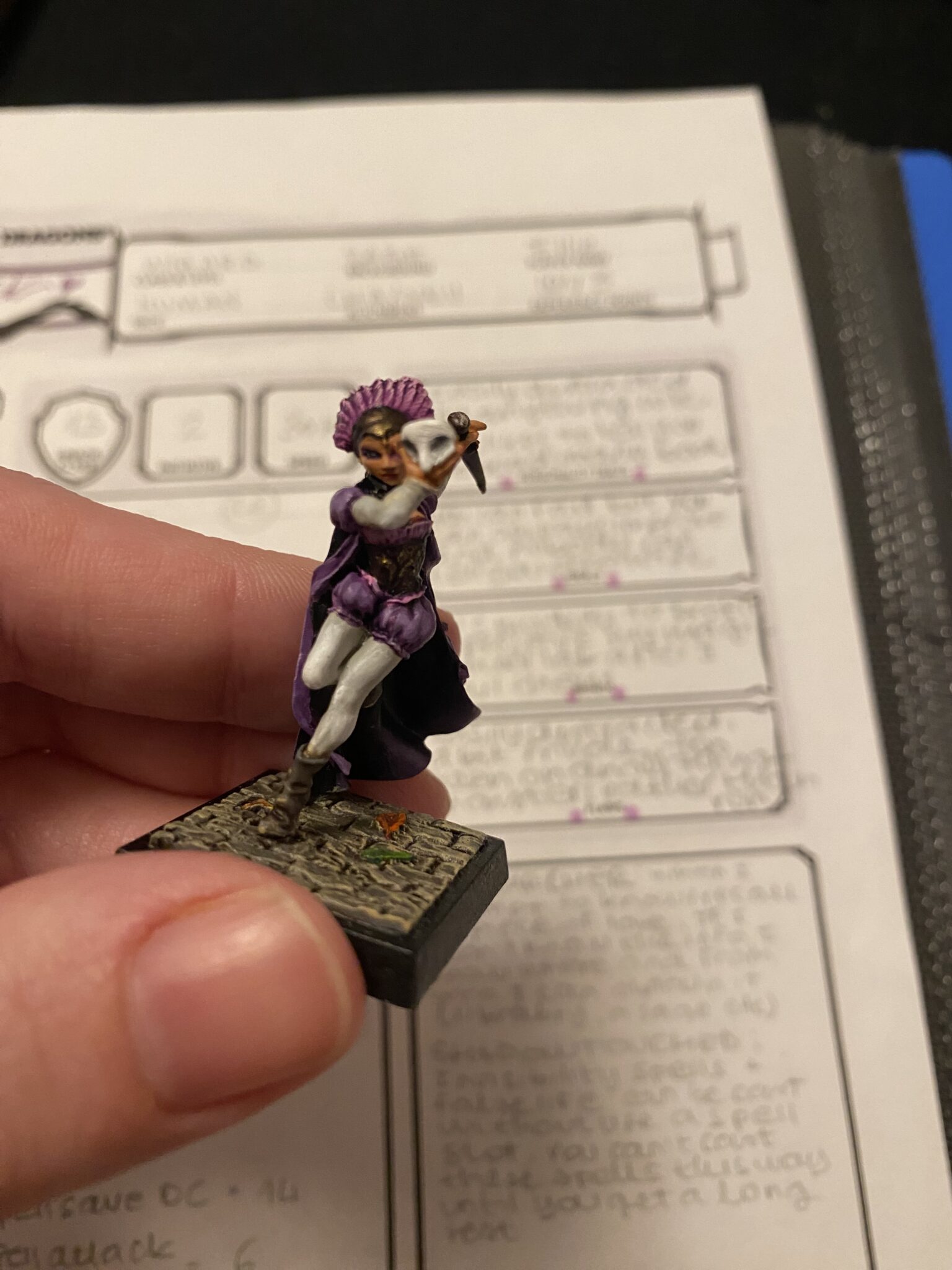 DM note, I made this as a standard combat encounter except that each attack, the player had to choose a way to strike a pose. On a success the character would have Advantage next turn and on a fail Disadvantage.

Since the player of Autumn actually did this before I even shared this rule, I gave both Advantage first round.

Our heroes fought for their lives while also striking magical and non-magical poses to cheer the crowd. Penny started doing acrobatics in the hanging room decor, while Autumn made her spirit weapons dance to the delight of the crowd. 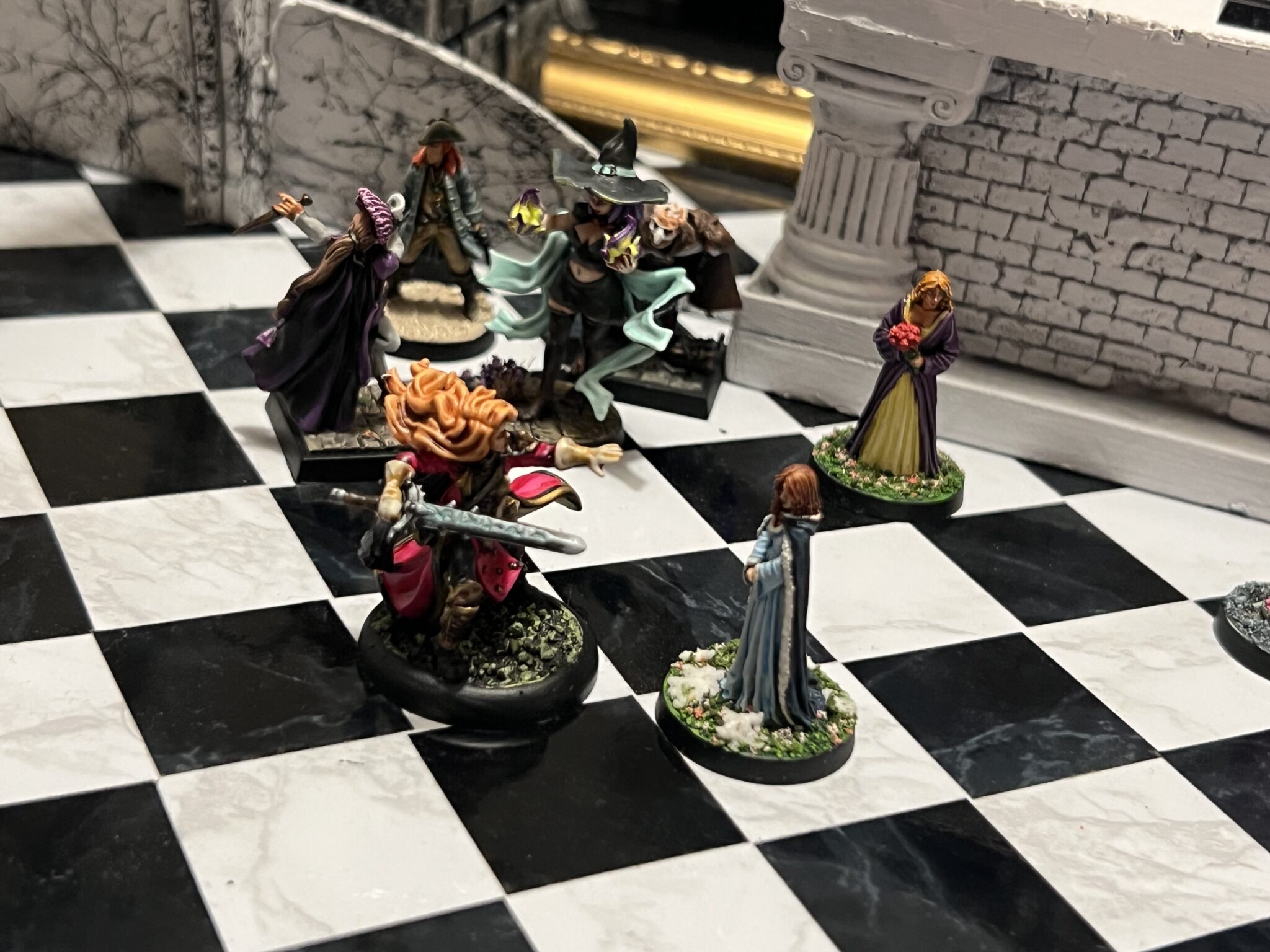 But Penny had a sneaky plan. She was not content with staying with her dance partner so she made multiple attempts to make it to the balcony, but alas in the end she was knocked unconscious. 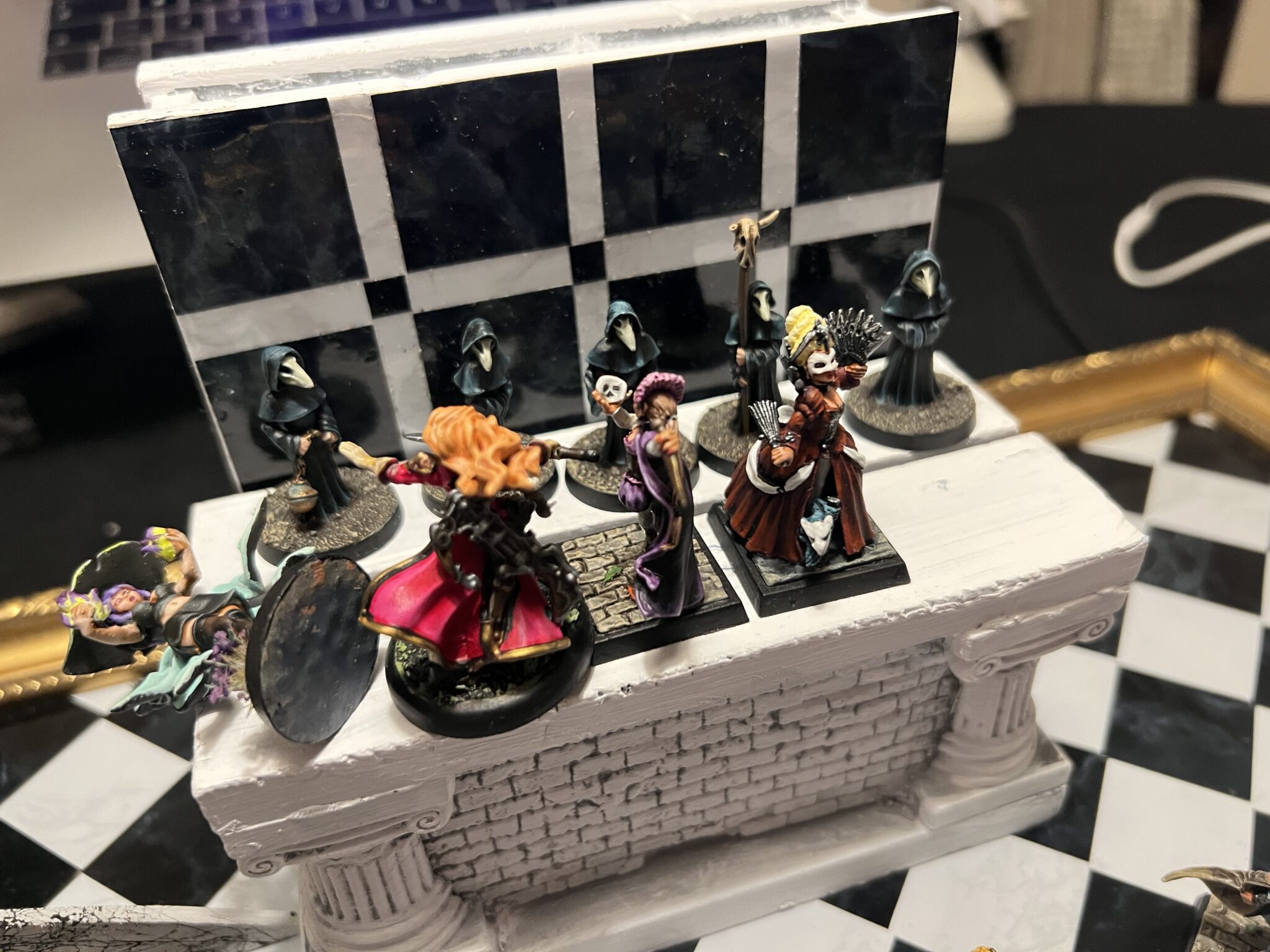 At that point the strange ritual ended to the clapping and cheers of the crowd.

One of the grey dressed people fully healed both Penny and Autumn and the lady who seemed to be running the show said she was impressed and that Double Trouble may be material of something called The Grey Parade, after which she and her grey-cladded retinue vanished in a cloud of purple smoke leaving our heroes baffled by the whole experience.

As the crowd went back to their business of partying, one of the doormen approached our heroes and gave them each their own mask.

Welcome to the Blitz Ball!